The first match of the month is arguably the most important. Hull City are above me only by goal difference. Their rise to the top flight has been, well, every bit as impressive as their rise in real life during this period. They popped out of the fourth division in 2002, the third division in 2005 and the second division in 2008. Peter Taylor is entitled to feel very proud of himself. But I want him to feel hurt on a level that he’s never experienced in his life. I want him to lie awake tonight and curse my very name. I want to break him over my knee. But how?

They played a standard 4-4-2, and we know what pierces a 4-4-2, but does it really when we’re away from home? It didn’t against Manchester City, where we lost our lead and went down 1-2. It didn’t at home against West Bromwich Albion and, to be honest, while we beat Everton, we only *just* beat them. Hull haven’t won a game since January though. They should be there for the taking. Maybe it’s just that the stakes are so high, but I can’t help second guessing myself. I resolve to play the ambitious, attacking formation, but at very slow speed with my finger poised above the tactics button. We can’t afford to lose this. Or draw it, for that matter. 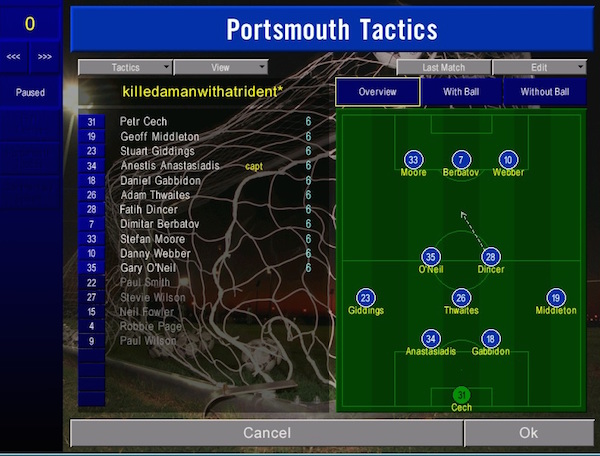 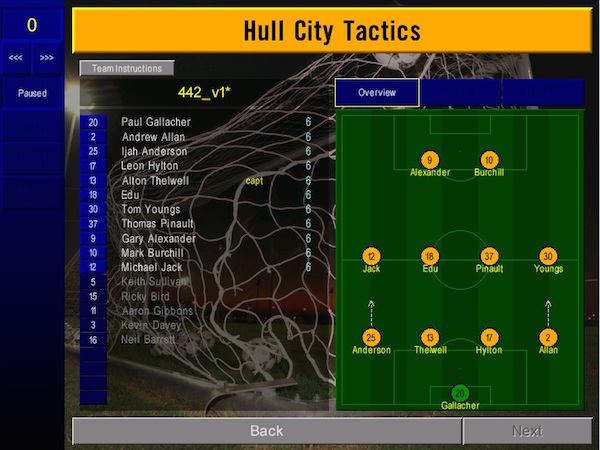 It’s an awkward, nervy clash in the wind and the rain. Neither team starts with any fluency and chances are thin on the ground. Their players keep running the ball out of play, our players keep getting themselves caught offside. But then the new Greek lad knocks over Mark Burchill and Anton Thelwell smashes the penalty past Petr Cech. After half an hour, we still haven’t put a shot on target and a change has to be made. 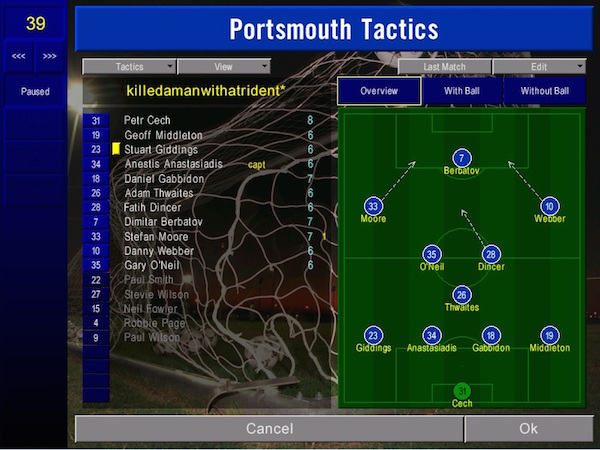 With the full backs focusing on defence and runners between the lines, we’re instantly more secure. Indeed, we equalise within two minutes of the change. A Dimitar Berbatov shot is parried by Paul Gallacher, who naturally is having one of his best games of the season, and Stefan Moore stabs home the rebound.

We’re the better team for half an hour after that, but can’t score, largely due to our inability to stay onside. With Hull pushing to a more attacking style of play, the latter stages of the game are distinctly unpleasant. As a result, the 4-5-1 of Helm’s Deep is invoked with the hope that Hull would over-commit themselves and we’d score on the counter. We didn’t score on the counter. But a point is fine. It’s fine. We’ve only lost one of the last five games, so there are silver linings all over this storm cloud if you only care to look for them. 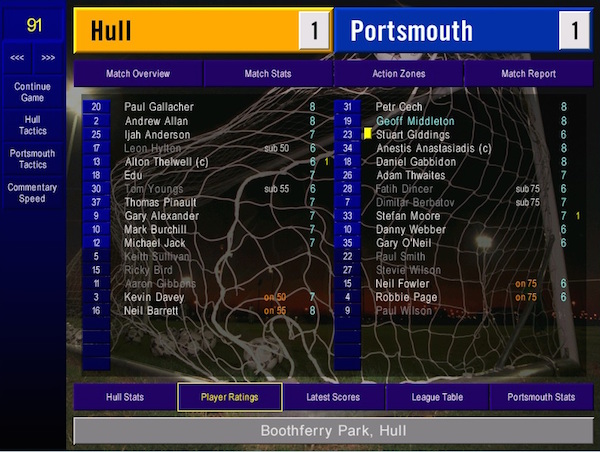 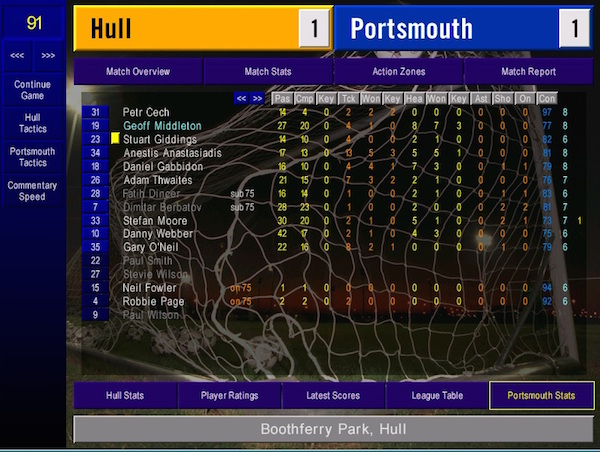 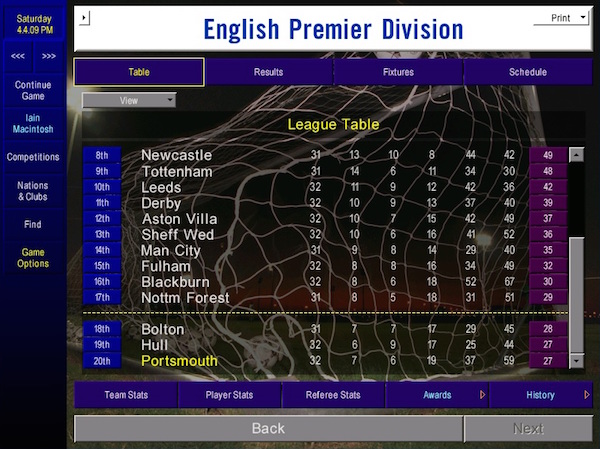 Next up is Derby County at home. They are mid-table and I sincerely hope that they’re going to play with their flip-flops on. Given that time is running out and that only points can save us, there is no argument over the way we’ll play today. It’s the trident. It’s all out attack. It’s another game of hoping that we can fuck them up early and then shut it all down like the good old days at Everton. 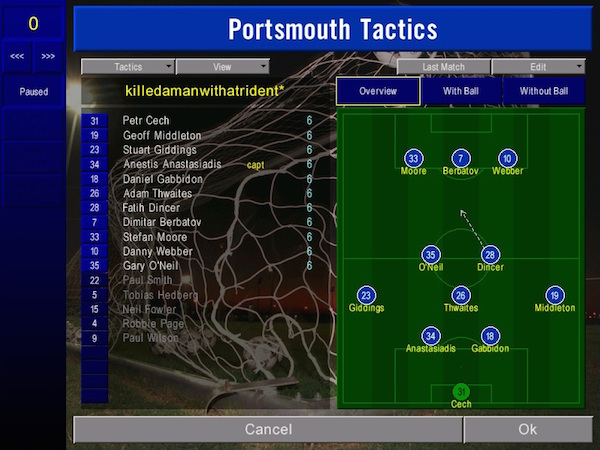 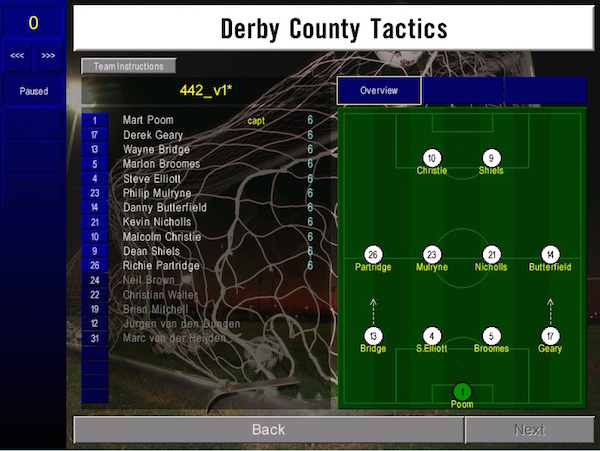 When I was 11, my friend and I did a sponsored cycle ride, repeatedly lapping our sprawling, grey Essex comprehensive as many times as we could in an hour. Naturally, our definition of what constituted a lap changed dramatically as the hour passed and we were soon taking short cuts through the teacher’s car park. This was a strategy that backfired horribly when one of the teachers pulled out without looking and, despite yanking onto the brakes, I hit the side of her car with a horrible thud. I suppose I was quite lucky really. The impact of my face upon her bonnet would have been far more powerful, were it not for the fact the bike flipped forward and I caught my testicles on the handlebars as I went over. My hairless ballbag acted like the hook on the underside of an F-15 landing on an aircraft carrier and all the momentum was dragged out of me. I still remember that teacher’s startled face behind the windscreen before I folded up in agony and slid onto the road. And while that was one of the most excruciatingly painful experiences of my life, it was nothing compared to the last 20 minutes of this match.

We started as if we had an early dinner reservation. Fatih Dincer opened the scoring after ten minutes. Danny Webber doubled the advantage six minutes later. I did sincerely ponder shutting the game down, but felt that would be excessive. Midway through the first half, I had cause to regret my cavalier attitude. Wayne Bridge made the first of a number flying runs down the flank and blasted one back for the Rams. Naturally, it was their first shot of the day.

At half time, we’d had nine chances, seven on target and yet we were only a goal ahead. Too early to stick, but were we good enough to twist? After five minutes of watching Bridge rampage down our flank, I opted for the middle ground of the 4-3-3 that saved us at Hull. Two minutes later, Derek Geary put the ball past his goalkeeper. And yet, for some reason, the referee disallowed it for offside. Needless to say, I was unamused by Mr Elleray’s decision. No matter. Just before the hour, Berbatov gave us the cushion we needed. But we were only allowed to enjoy it for five minutes. Dean Shiels made it 3-2.

Now we were wobbly and Derby could smell blood in the water. They started to throw strikers onto the pitch, they changed to an attacking mentality. Malcolm Christie hit the post. Geoff Middleton cleared an effort off the line. For the last 13 minutes, it was full Helm’s Deep, everyone back defending. And we held on. We held for the three most important points of the season. 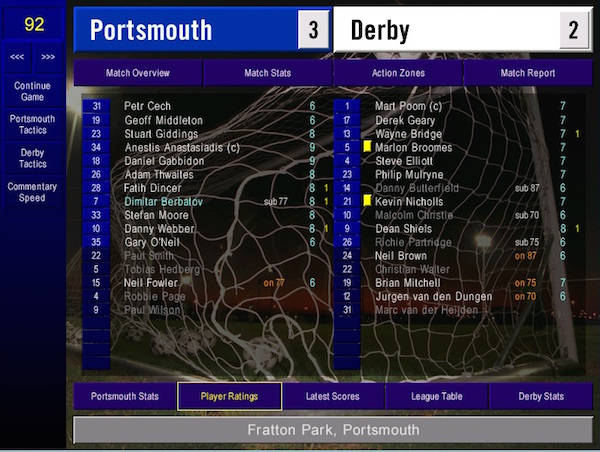 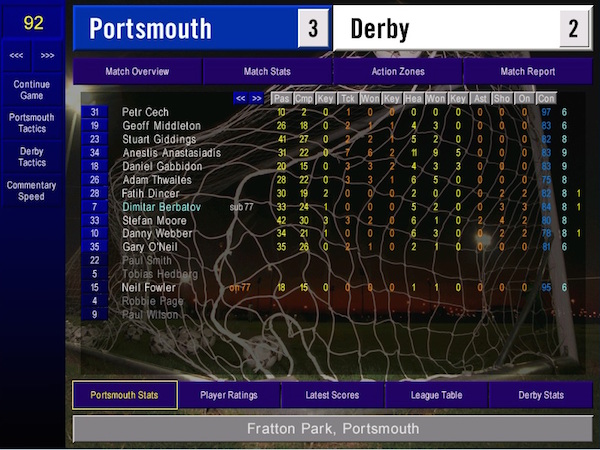 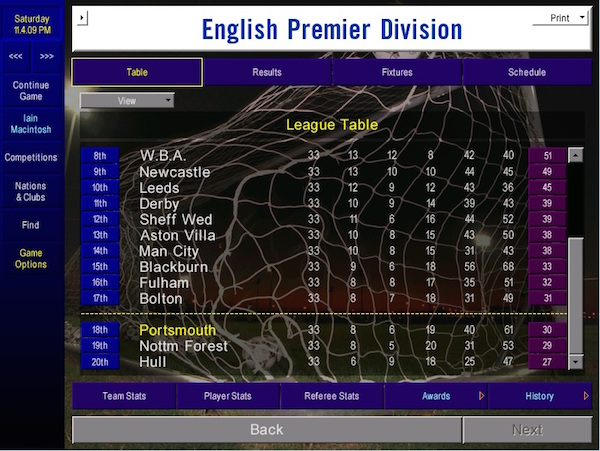 With Nottingham Forest and Hull both losing, we now have two teams underneath us. But we need three. There are only five games left and we need one of Blackburn, Fulham or Bastard Bolton to hit the skids. And we also need to avoid losing to Tottenham away from home. That’s a big ask.

But we’re improving so much. I look back at my six signings and realise that every single one of them is working out. Adam Thwaites (7.15) is worth four times what I paid for him. Petr Cech (7.00, but three 8’s in his last five games) is looking like Petr Cech finally. The new Greek lad (8.00) is incredible. Danny Gabbidon (7.50) is the perfect wingman for him. Stefan Moore (7.50 and five in 12) is hitting form and even Dimitar Berbatov (6.80 and four in fifteen) is looking lively. We are turning it around. We are a better team. But is it enough? 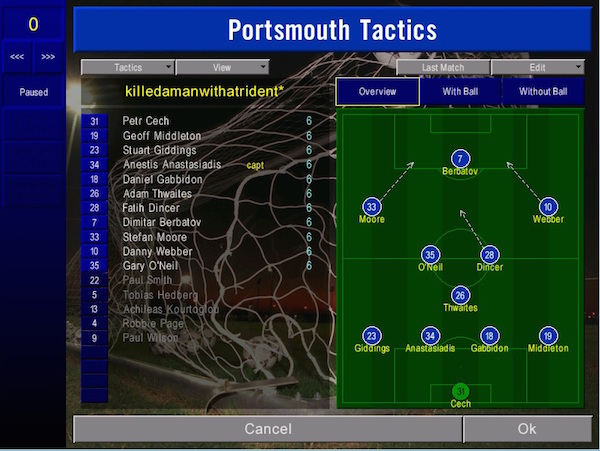 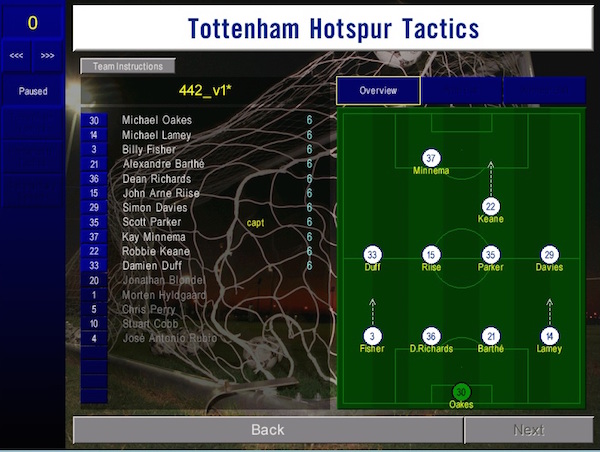 What a start! Berbatov crashes one home after 15 minutes and suddenly we’re on our way. Spurs are making chances, but we’re holding out and we’re making our own. As half time approaches, it’s just a case of keeping our heads and making sure nothing horrible happens.

On the stroke of half time, something horrible happens. In fact, it’s the worst thing that could possibly have happened. Petr Cech catches Damien Duff in the box and is shown a straight red card. That doesn’t just fuck this game, that could fuck three more. In fact, it could be four, because he’s already been sent off once for me this season. And we’ve only got four more games left. Paul Smith comes on, but he can’t reach the penalty. I leave two men up front because we can’t hold out for 45 minutes if we fall back with ten men. In the end, we hold out for 20 and then Robbie Keane puts Spurs ahead. To make matters worse, Gabbidon is carried off before the end. Then Spurs score a third, but I don’t know how it happened because I couldn’t see through the tears of frustration. 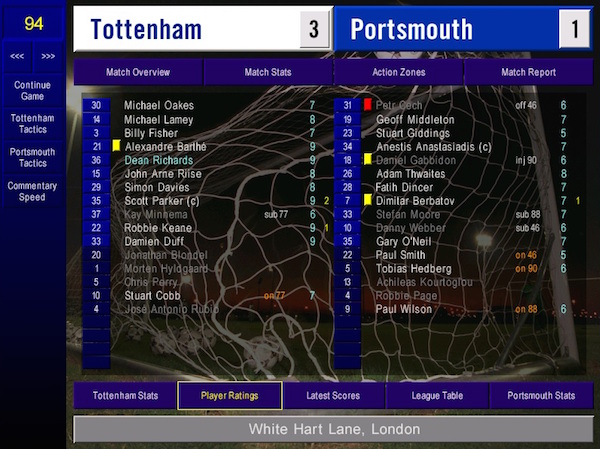 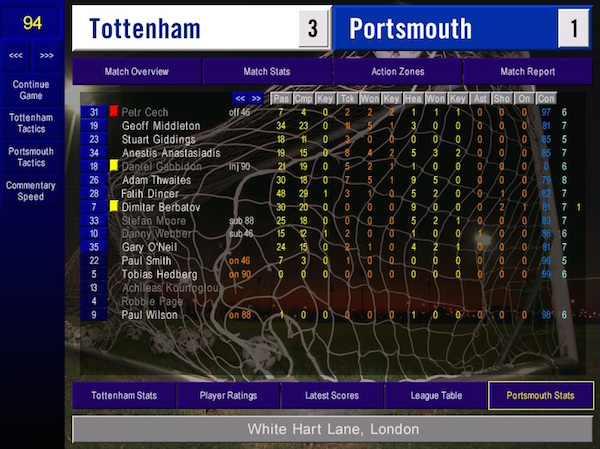 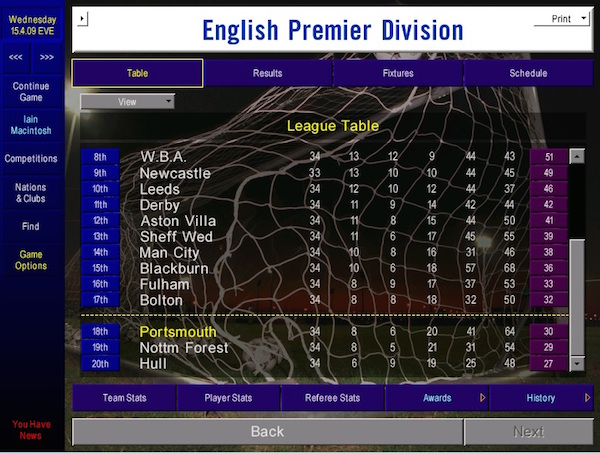 We appeal Cech’s four game ban, but the FA feel that the punishment is, “just and fair.” But for administrative reasons, the ban doesn’t kick in until the last week of the month, so we still have him for two games. After that, we’ll have to complete our fight for survival with Paul Smith, who has conceded 13 goals in his four and a half appearances. Gabbidon, mercifully, is only out for ten days, but we’ll miss him all the same.

Sheffield Wednesday have caused me heartache in the past, so I shudder at their arrival at Fratton Park. They also play a back five with loads of complicated looking lines and I have no idea what to do with that. I feel it might be safest to stick with this messy compromise of 4-3-3, especially given the way their full backs run and the way ours panic under the slightest pressure. In fact Stuart Giddings’ morale has collapsed so far that he’s been replaced by Tommy Williams. But here goes… 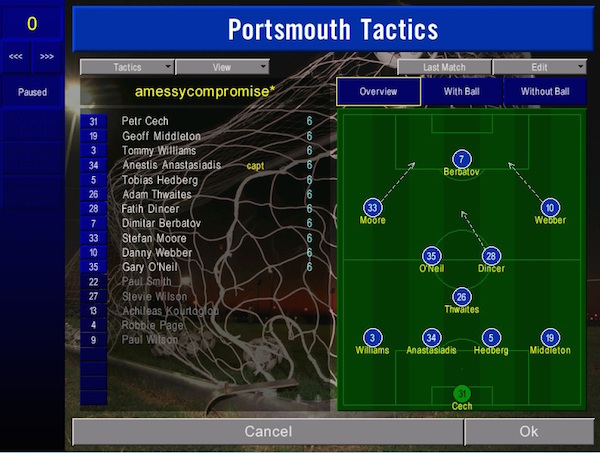 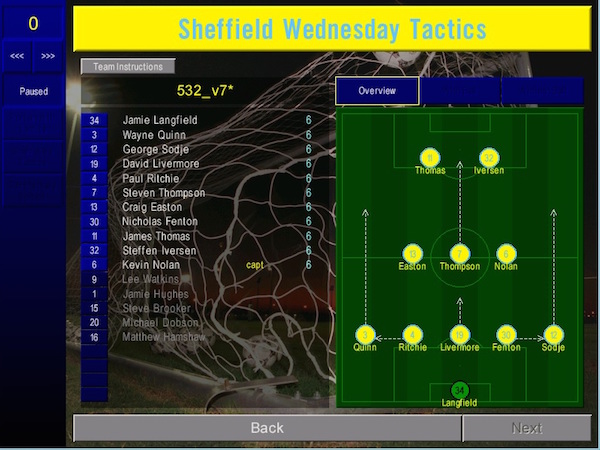 And there it is. The explosion that I’ve been waiting for these last few weeks. The eruption of rage at a league that has wronged them. The vengeful swings of a team that knows it should be far, far higher up the table than this. There were times today when I actually pitied Sheffield Wednesday. It took four minutes for Berbatov to score. Eight minutes later, Webber made it two. Wednesday lost the ball at the restart and Fatih Dincer made it three. On 20 minutes, Berbatov had another, thanks to a fine cross from Williams. Midway through the first half, we won a penalty and Dincer put that away too. Five minutes before the break, Berbatov completed his hat-trick. 5-0 and it still wasn’t half time. Naturally, Wednesday made it awkward. Two quick fire goals, one a contentious penalty, had me scrambling for Helm’s Deep. But we coasted home. 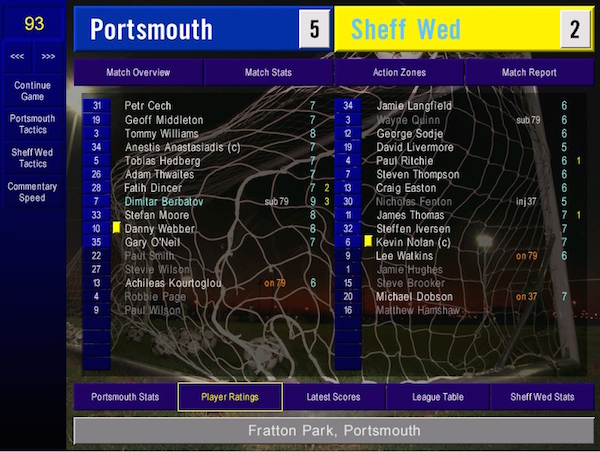 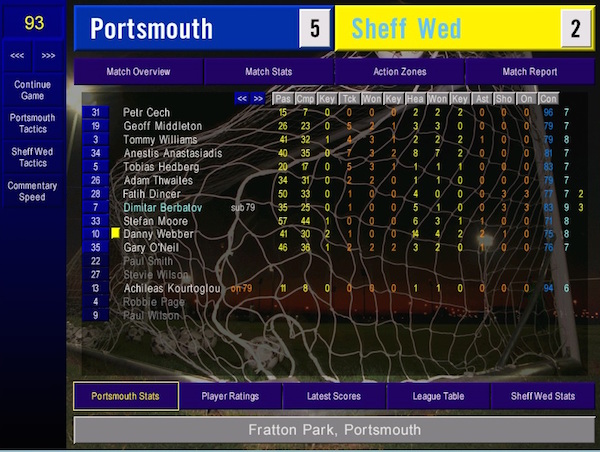 Elsewhere, there were defeats for Hull, Nottingham Forest, Bastard Bolton and Manchester City, who aren’t safe yet. We are, for the first time in weeks, out of the drop zone. But can we stay there? There are three games left. Blackburn at home, Fulham away and Sunderland at home on the last day of the season, who may be champions by then because this game is getting weird. It’s in our hands. Oh, it’s in our hands, all right. But can we hang on to it? 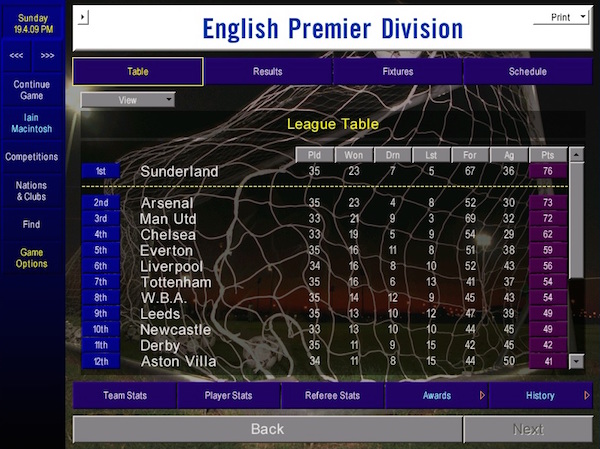 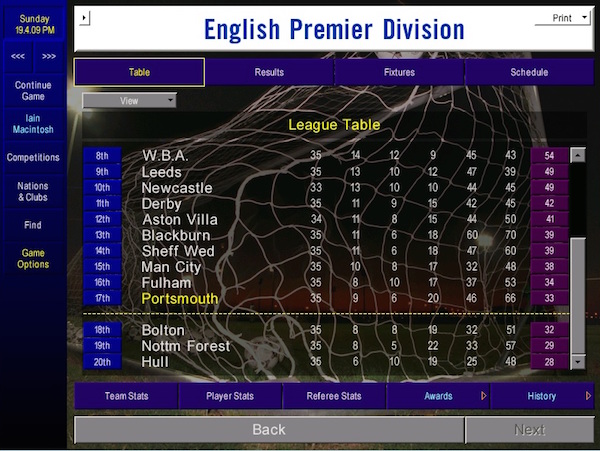 This is tight. This is terrifying. This is…too much for one update. So join us on Thursday to see how the season ends.