@iainmacintosh @thesetpieces It's nearly midnight in Brisbane and some how I am seriously considering staying up for this. I am a sad man

@iainmacintosh @thesetpieces Currently on a train up to Glasgow. Risk sprinting down the aisle in celebration.

@iainmacintosh @thesetpieces when are you going to get a proper job?

I lay in my bed for some time this morning, staring up at the ceiling, noticing things I hadn’t noticed before. The screw to the curtain rail, bending against gravity’s relentless pull. The visible brush strokes in the paintwork left behind by the previous owner. A spider’s web that holds true even as the unseasonal June wind forces its way through the cracks in the window frame. Which one am I? The very moveable object caught by the irresistible force? The visible legacy of a rushed job? Or am I the spider, prevailing against nature? It doesn’t matter. What matters is that I’ve never needed to poo quite this much.

We’ve waited nearly six years to get to this stage. Six years of battles against administrators. Six years of fights against relegation. Six years of internal turmoil. But we’ve finally made it to a League Cup Final. That was the aim all along. Take over a broken Everton side, fix them and win with them. This is the challenge. And it all comes down to one game.

Preparation has been good. We’re in decent form and we haven’t been too badly affected by injuries. I’d rather be doing this with Ivan de la Peña and Xabi Alonso, of course I would. But in Li Tie and Thiago Motta I have deputies with abilities far beyond the men who used to be my first choices. It could be worse. And Tottenham have injuries too. They’ve lost Patrick Berger, once punched in the face mid-game by Gabriel Milito, and John Arne Riise. We know that they usually play 4-4-2, a formation that usually struggles against my mad arse shape. We know that sometimes they change to something a little more fluid. So we have to be careful. But beyond that, there’s very little that can be done as the hours tick by. I check my set piece takers. Then I check them again. I check the marking. I check the runs. I check the fitness. And it’s still three hours until kick-off.

But eventually, time passes. The media help. Football is about the fans and we’ve gone to great lengths to make this the most accessible cup final in history. That means putting up with a film crew  on my shoulder for the most important team talk of my life. But that’s modern football, isn’t it? And they help distract me from the mounting anxiety.

And so the choice is yours. You can watch the game here or you can scroll down and read it the way you always do. Or you can do both. There’s nothing more to say now except, thank you. Thank you for being with me on the journey. I know we’ve had our little tiffs and rows, but I do love you. And I suspect I always shall. 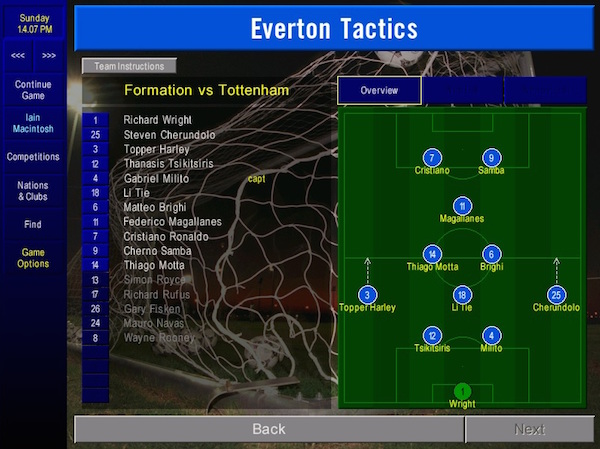 We attack the game from the first whistle, like the dogs of war we are. Again and again, we surge forward. But again and again, England goalkeeper Michael Oakes holds us at bay. Federico Magallanes peppers Tottenham’s goal with shots and Frank Rijkaard’s only recourse is to order his players to savage mine. Scott Parker clatters Steven Cherundolo and earns a booking. Chris Perry hits Cristiano Ronaldo hard and leaves him sprawled out on the Wembley turf. But it takes more than that to intimidate my men. Not much more, granted.

After half an hour, we make the breakthrough. Matteo Brighi beats Simon Davies and charges across the slippery surface, he turns well, evading one tackle, then another. And then with his left foot, he hits a ferocious shot that finally beats Oakes. We have the lead we deserve. Holding onto it is the issue at hand.

In the second half, the dominance continues. Perry takes out Ronaldo once again and he’s already been booked. Referee Pete Faulkner lets him off. Perry gives him a mouthful abuse, a shameful act for which the FA will doubtless take an interest. Faulkner lets him off again. I am all in favour of referees who let the game flow, but this is too much. For there must always be a rule of law. Without it, we are no better than the animals.

But even though the referee won’t stop Spurs, perhaps he doesn’t need to. Brighi wins the ball from Davies and feeds it to Ronaldo. And Ronaldo scores. For a moment, time stands still. We are 2-0 up at Wembley in a cup final and with only 37 minutes left to play. By the time there are only 36 minutes left to play, the score is 2-1. Damian Duff gets down the left, whips in a cross and Robbie Keane is there to put the ball in the back of the net. Now is the time for cool heads. There are no dramatic changes. After all, we’re still leading. We’re still the better team. For now.

On 70 minutes, I notice that Cherno Samba is limping. He’s replaced by Rooney. Five minutes later, Topper Harley is lame, victim of a potential groin injury. He is replaced by Mauro Navas. We hold the field of battle still, but only just. Tottenham’s resistance is intensifying. They did not come here to be humiliated.

There are four minutes left when Li Tie collects the ball on the halfway line and looks up to a selection box of Everton team mates, piling forward on a late charge. Four minutes to hold a single goal lead at an increasingly tense Wembley. He chooses Rooney and slips the ball to the England striker. Spurs substitute Gavin Mahon intercepts, but he can’t control the ball. It falls to Thiago Motta, the man I wasn’t going to play, the man who never looks entirely comfortable in anything other than the number ten position. The man who won the day for Everton. Without even blinking, he drives the ball past Oakes and the game is ours. Tottenham are vanquished.

I refuse to join the players on their walk up the Wembley steps. That’s not where a manager belongs. That’s not what a manager does. His job is to prepare, to guide and to inspire. It is to them that the glory belongs. I am happy to stand on the pitch, staring up at the royal box with the rest of my staff. Joining the Everton fans in a mighty, cathartic roar when Milito lifts that weird little three-handled trophy above his head. And in that moment, as a heady cocktail of relief and joy and satisfaction courses through my veins, I know one thing: I am the spider. I am the spider whose web did not break. 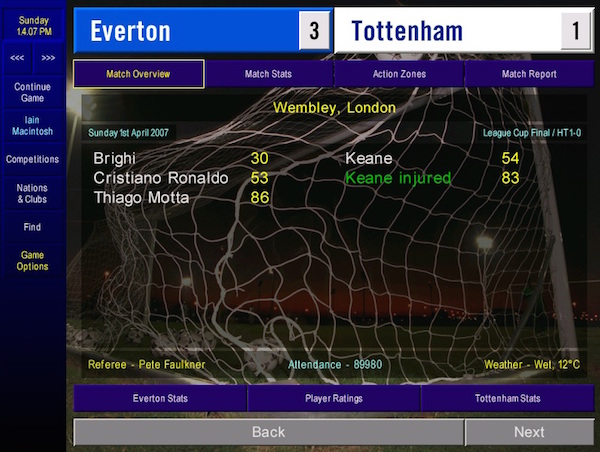 I just celebrated a man I don't know winning a trophy that I can't touch on a game I don't own. And I loved it. @iainmacintosh @thesetpieces

@thesetpieces Not sure what I'm happiest about. @iainmacintosh's blue dogs of war winning or hiding my subtle celebrations from the boss.

@thesetpieces We always had faith Iain! We knew you'd win eventually. Never doubted you. Not even once. Honestly. https://t.co/grTEkJ6Ubi 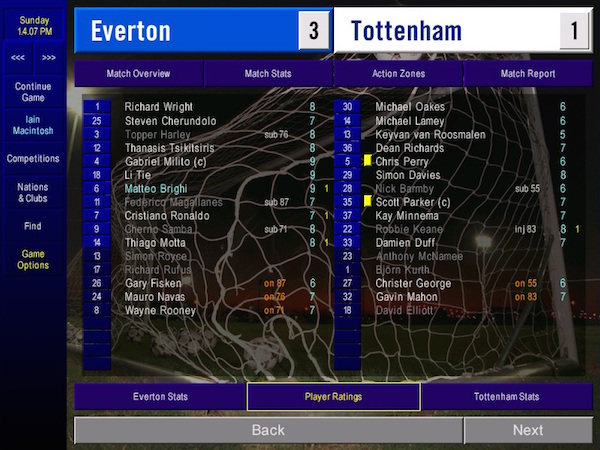