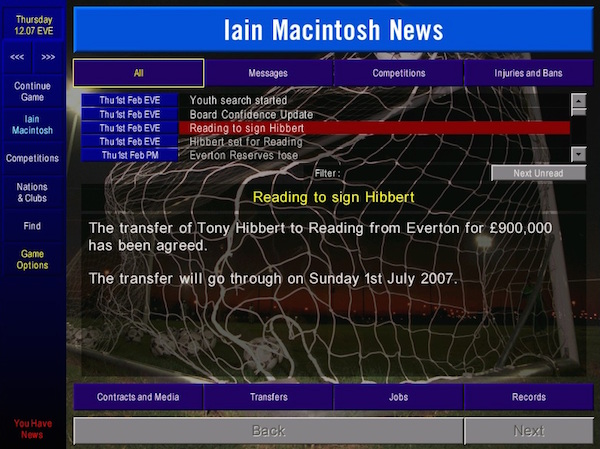 Did I disappoint you or let you down? Should I be feeling guilty or let the supporters frown? Because I saw the end before we’d begun. Yes, I saw you were blinded and I knew I had won. So I took what’s mine by eternal right. Took your soul out into the night. It may be over but it won’t stop there, I am here for you if you’d only care. You touched my heart, you touched my soul. You changed my life and you did a goal. And love is blind and that I knew, when my heart was blinded by you. I’ve kissed your sweaty forehead and held your fishing rod. Shared your dreams and shared the communal bath with you. I know you well, I know your smell. I’ve been addicted to you. Goodbye, Tony Hibbert. Goodbye, my friend. You have been the one. You have been the one for me.

And so, tear-streaked and broken-hearted, we move on. Chelsea at home. Claudio Ranieri has fashioned one of the most consistently excellent teams in the league. And we go up against them without Gabriel Milito, without Ivan de la Peña and without Cristiano Ronaldo. I won’t lie to you, it feels odd to give this much responsibility to Gary Fisken… 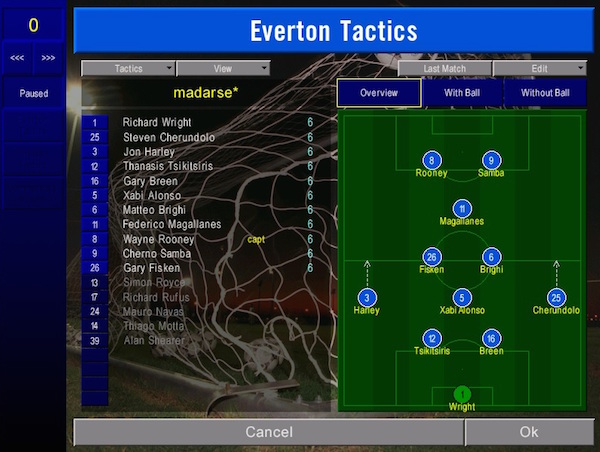 I have absolutely no idea what just happened. We blew them away as if they were a third division team. Fisken set the surreal tone by scoring the first, Samba headed home his ninth of the season to double the lead and, just as I was rubbing my eyes and tapping my computer to see if it was working okay, Federico Magallanes popped up and hit a third. That’s…that’s probably the best result/performance combination we’ve ever had in the league. Ever. And it puts us second in the table with 13 games to go. I’m a bit confused. I’m even more confused the following day when leaders Manchester United lose away to Blackburn Rovers. The gap is only three points. 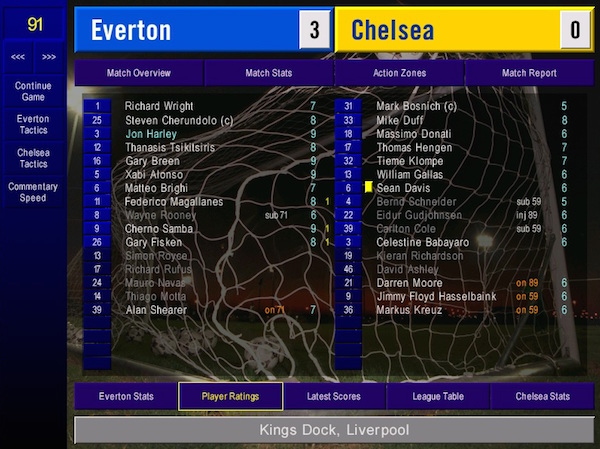 The question, of course, is whether or not we can keep this going. Can a team like Everton sustain title-winning form? We do have an incredible knack of blasting our own toes off. And there are still issues to contend with. Wayne Rooney still isn’t averaging over 7.00. But with Zlatan on the list, and thus far attracting the attention of absolutely no-one, Rooney and Samba are pretty much all we’ve got. Well, we’ve got Alan Shearer, but the situation isn’t that desperate. Yet. Here come mediocre Middlesbrough. And here is an unchanged team. 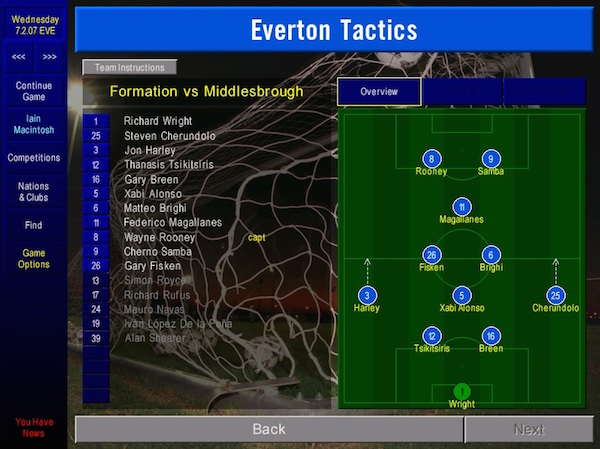 Harrumph. It’s hard to claim that we deserved much more from this. What appeared to be a comfortable start, and a goal from Rooney no less, soon stagnated. We suffered the indignity of allowing Jamie Carragher, ‘Boro’s goal shy right winger, to score the equaliser and we were a little fortunate not to concede again. Richard Wright picked a good day to offer a first class performance. But a point is a point, especially away from home. We’ll take it. 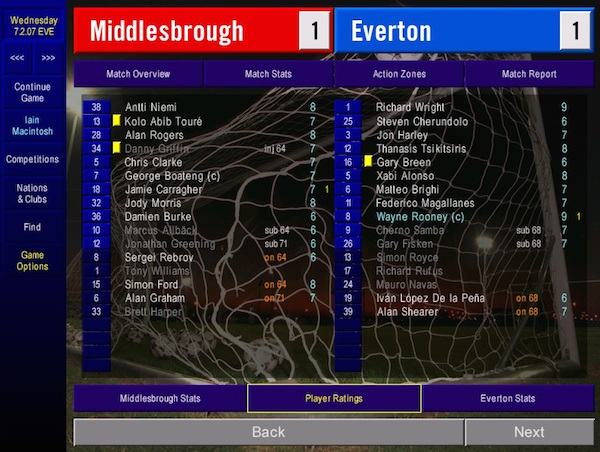 It’s always sad when someone you’ve rescued from obscurity gets delusions of grandeur. Danny Senda was working as a wing-back in a Wycombe side when I met him. I picked him out, I shook him up, I turned him around. Turned him into someone new. Now four years later on, he’s being a complete twat. Reserve team football hasn’t been easy to do. But he shouldn’t forget it’s me who put him where he is now. And I can put him back down too. 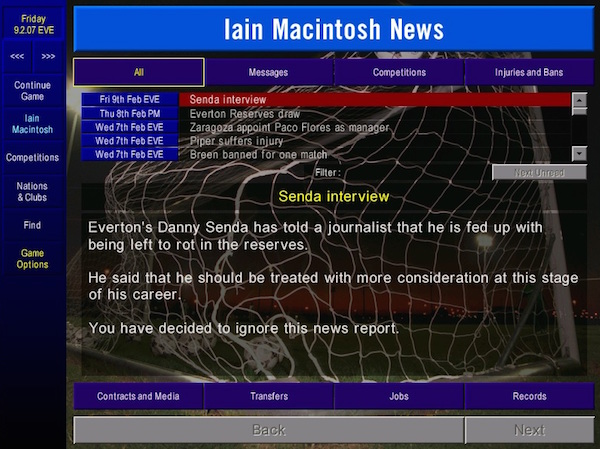 But I haven’t got time to concern myself with the anxieties of reserves right now. I’ve got title challenging Tottenham to deal with, and that’s never easy. Fortunately, Ivan de la Peña is now fully fit and operational, so he can step in for Fisken. There are no other changes. Steven Cherundolo will continue on the right. Think about that, Senda. Think about that. 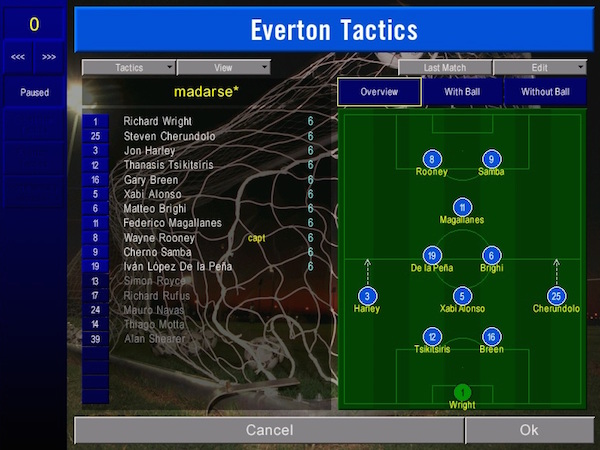 That’s okay. I’ll take that point as well. Spurs are a fine team and a clean sheet is always well received. We were arguably the better side, but it was the usual story of putting lots of shots on target and not converting any of them. But we were up against World Cup winning England goalkeeper Michael Oakes, so that’s to be expected. It would have been nice if our late changes had turned the game, but at least we haven’t been beaten. Granted, we haven’t won in two games, but we haven’t lost either. And we’ve got a huge game coming up now. 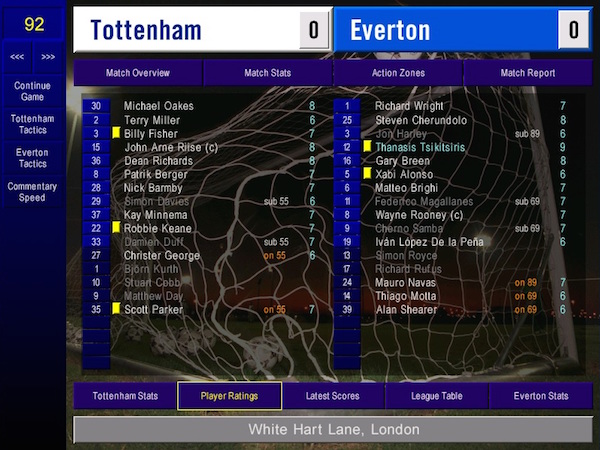 This is what it’s all about. Here at Everton, we do not crave Champions League football. We do not seek exciting new revenue streams in South East Asia, nor do we beg for corporate partnerships in Latin America. At the Kings Dock, we wake up every morning and we think of silverware. That is why we exist. We live to win trophies.

It’s just a shame that we haven’t won any under my reign. Or indeed, for the last 12 years. But perhaps we’re getting closer. We lost the first leg of the League Cup semi-final to Arsenal 2-1, but that away goal could prove crucial. We were missing our first choice defensive pairing that night, but they’re both back now. We’ll have a full house of partisan supporters behind us, willing us on to glory. We are close to our first final. So close that we can smell the gourmet pulled pork sandwich stands on Wembley Way. I see you there, like greyhounds in the slips, straining upon the start. The game’s afoot! Follow your spirit! And upon this charge, cry God for Howard Kendall, Everton and Saint Catterick! 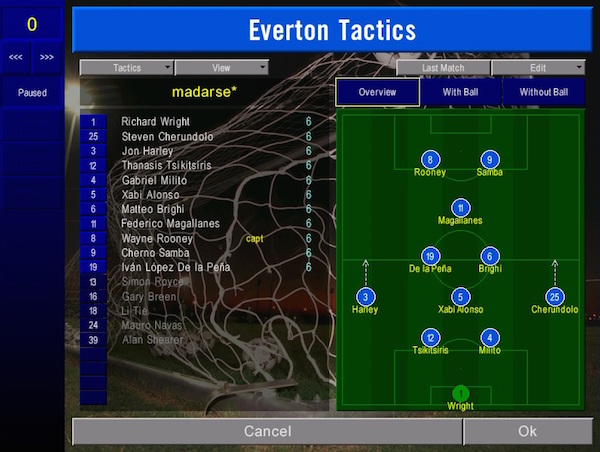 Shit the bed. Shit your bed. Shit everyone’s beds. The Blue Dogs of War just went thermonuclear. I almost feel sorry for Arsenal. No-one should have to face that sort of onslaught. That was just brutal. Rami Shaaban will need therapy. Two goals from Magallanes. Two from Rooney! ROONEY! We just kept kicking them. Again and again until they stopped twitching. Take that, Bobby Petta. Take that, Sun Jihai. Take that, Jody Craddock. You will feel your scars twinge whenever anyone says the name ‘Everton’ from this day until the end of time. And you will watch us on television on April 1 when we walk out at Wembley. Almost certainly to lose to Tottenham on penalties. But we’ll worry about that later. What a night. What a magical, magical night. 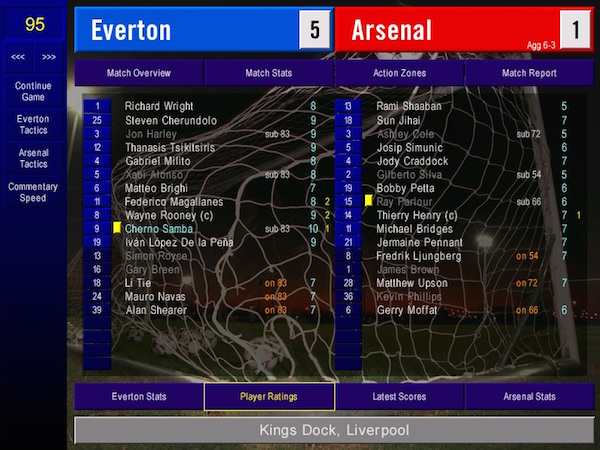 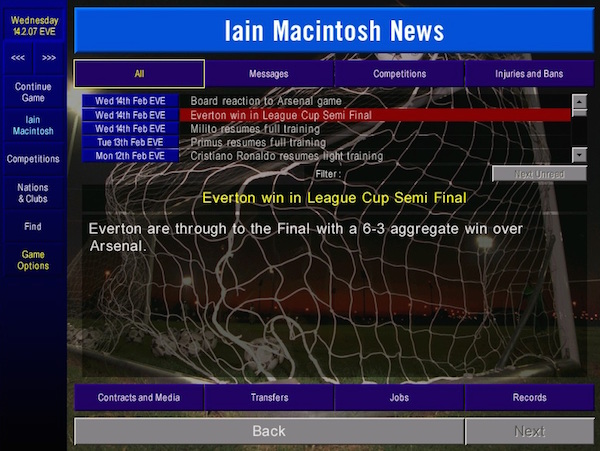 And we’re not done with the cup action yet. We have Sunderland in the FA Cup fifth round and we’re in the mood now. We have the scent of goals in our nostrils. Though that could just be the hangover talking. We’ve lost Cherno Samba to injury, but given the opposition, it feels like it’s time for Shearer to make his first start. Let’s see if we can keep this run going. After all, technically, we’re on for the treble right now. 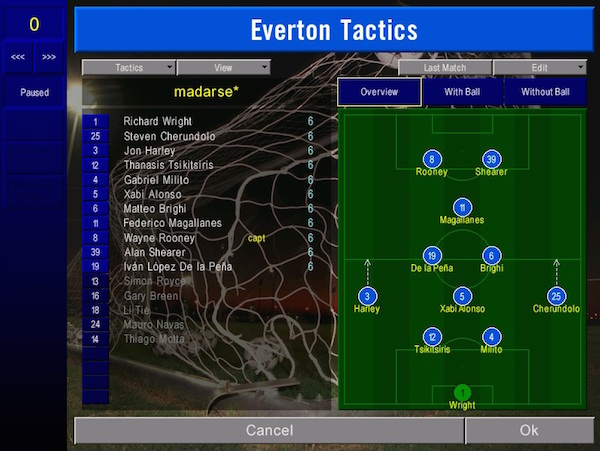 A fine win. A scoreline that flattered us a little, but one that was secured with excellent defending once again. We certainly have no deficiencies in that department. But sadly, this may have been one season too many for Shearer. He’s our coach and he’s well loved, but he’s just too slow to get into shooting positions now. I’ll give him one more go, but I fear he’s going to have to be an emergency option now. But let us not wallow in misery. We’re through to the last eight in the FA Cup. That’s as far as we’ve ever progressed. And we have Manchester United at home in the next round. Turf them out, and it’s ours to lose. 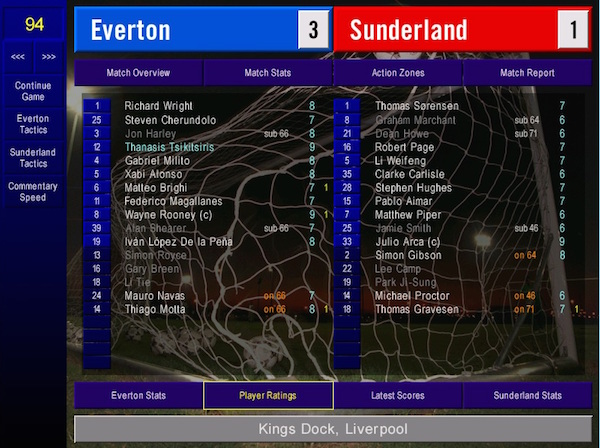 If we can end this month on a high, I’ll be delighted. But Derby at home? If I know anything about this game and this Everton side, that’s got “22 shots on target and a 0-1 defeat,” written all over it in ten foot high neon letters. We’re still fit, so we’ll go with the same team and Shearer will have that one last chance to prove himself. Lads, let’s not bow to tradition. Let’s keep this run going. Why don’t we just try consistency on for size and see how it feels, eh? 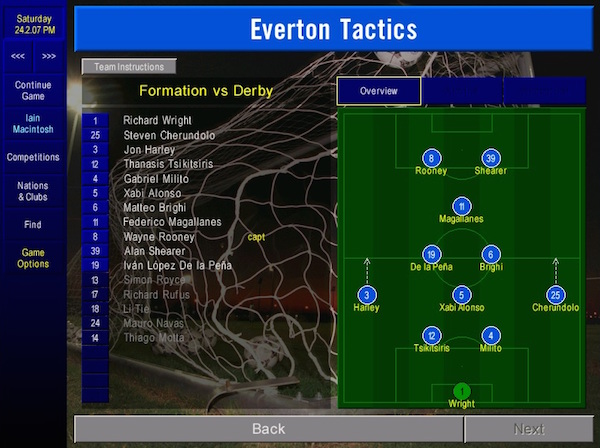 After five minutes, we were a goal down thanks to someone called Nick Stevens. I feared the worst. But something has shifted. We seem to believe in ourselves now. Shearer was reluctantly withdrawn at the break, his powers clearly waning. When Ronaldo returns from injury, we’ll use him as a striker for the rest of the season. But today the goals came from elsewhere. From Thiago Motta in the number 10 role, from Tsikitsiris at a set piece. And from Rooney again! These are truly interesting times. 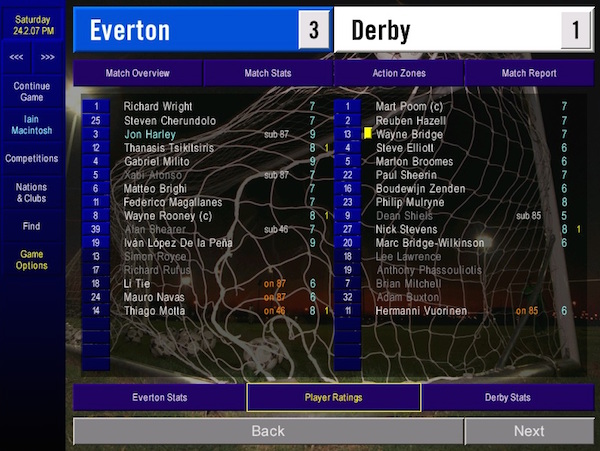 Well now…that looks much better doesn’t it? It will be a tight race for a top four spot and the title is looking less likely now. But we’re in the conversation. We’re in the conversation for every domestic honour. That’s a huge step forward as winter turns to spring. Is this all some kind of mighty build up for a heavy fall? Are the Gods of football conspiring against us in the cruellest possible way. Perhaps? But let’s sit back and enjoy the ride. 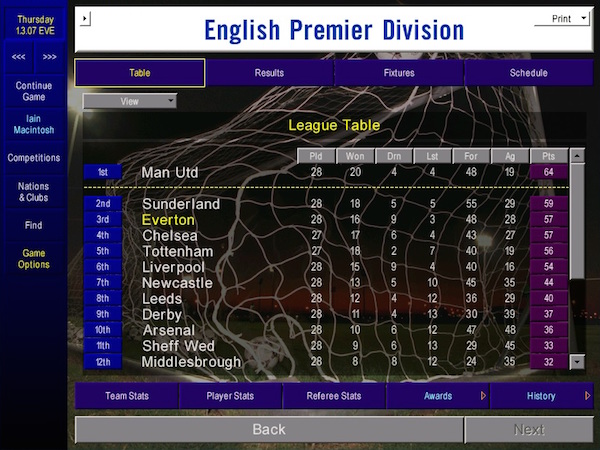 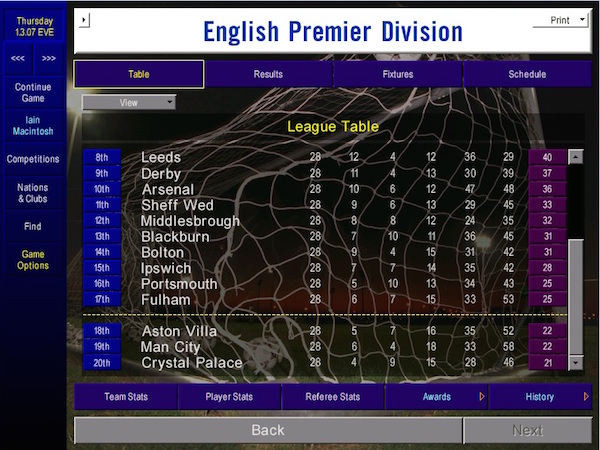