After last month’s results, the mood of the supporters has turned once again. There’s nothing like a winning streak, and of course a victory over Liverpool, to fire people up. Indeed, the form enjoyed by Everton in this alternative reality has led to a surreal development over on Oddschecker where Betfair have gone and done this.

@iainmacintosh we thought it was only right to get you added to the list. Thanks @Betfair >> https://t.co/ajLFDdLbbI pic.twitter.com/R2xMbzJXb2

It’s flattering to be linked with such a wonderful Actual Real Life Football Club, but I have a job to do here at the King’s Dock in my mum’s basement on this rickety old PC.

@iainmacintosh Semi finals of the League Cup…. beating Liverpool… 3 points from the top of the league… THIS IS THE FUCKING SEASON!!!!!

Though it should be said that some people will never, ever be happy. This brings to mind the old saying about football in Sheffield. “At Wednesday, they’d buy tickets to watch the grass grow. At United, they’d shout at it for not growing quickly enough.”

But this month will not be easy. It’s another bumper edition as our uncharacteristic cup success means far more games than we ever played before. We’re usually down to four games a month and planning for next season by now. Newcastle are a vibrant, attacking side and they’re usually in the mix for a top four place. We’ll have to be very good to beat them. They can kill us on the break, we always have problems with Zissis Vryzas. I need to see something from the strikers today. I’m going to make my decision soon. 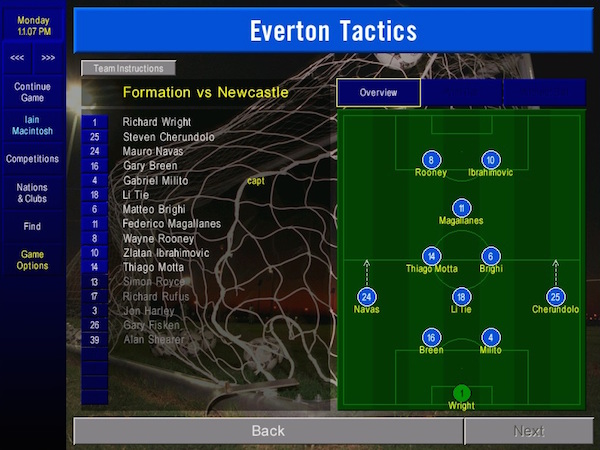 A win, a deserved win, but we had to work hard for it. Once again, we were reliant on a late stunner from Federico Magallanes, salvaged from the transfer list and restored to glory last month. Matt Holland stunned us with an early strike, but we were on top from that point on, but with on slight issue. Zlatan did nothing. Not a shot, not a key pass, not a single header won. I’m not even sure how he managed to get a seven. But I am sure of what I have to do. 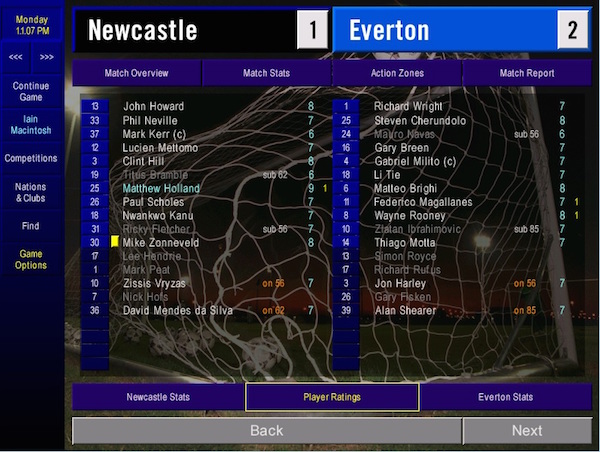 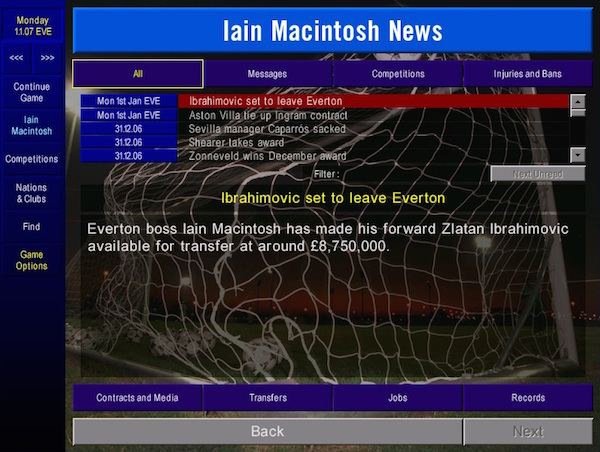 He’s been here two and a half years, he averages about 7.3, he’s scored 30 in 72 starts. He’s just not made the grade and we can’t afford passengers. If we’re happy to bob about in the top eight with the occasional cup run (and actually, we should be happy with that given how we started the game) then he’s fine. But we don’t want to do that. We want to win things, we want to win the league, we want to conquer Europe. The only way we’re going to do those things is with a 30 goal a season striker. Ideally, we’d have two 30 goal a season strikers. Christ, one 20 goal a season striker would do right now. But we’re £2m in debt, we have no spending money and we need to generate funds. There’s a young Greek striker at Anderlecht who looks good. But I can’t pay for him in cuddles.

And so we move on. Middlesbrough away in the FA Cup. Why do we never get easy games in the cup? Thanasis Tsikitsiris returns to the defence, Ivan de la Peña returns to the midfield and Cherno Samba will partner Wayne Rooney. Let’s get in, let’s get out with a win and let’s not tire ourselves out. This is a long month. 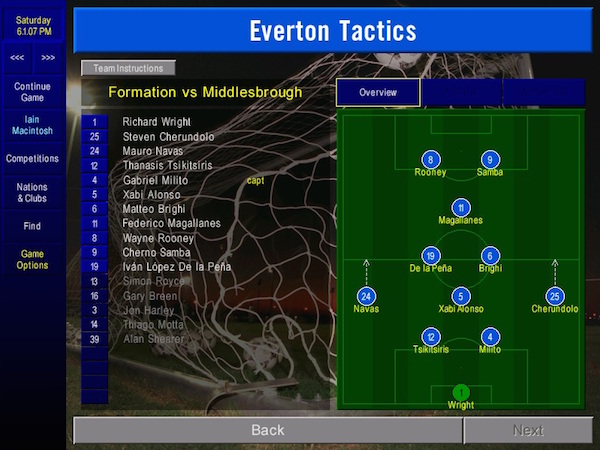 Jesus Henry Christ, I’d rather have gone out of the competition. Another injury for Tsikitsiris, a squad of exhausted players and a grim 0-0 draw. We were the better team, of course, but not by enough. Seven shots, all on target, but Antti Niemi saved them all. This is an enduring problem, not fixed by banning everyone except Magallanes from long shots. At least we’ve got a bit of a break now. But the end of the month is piling up fast. 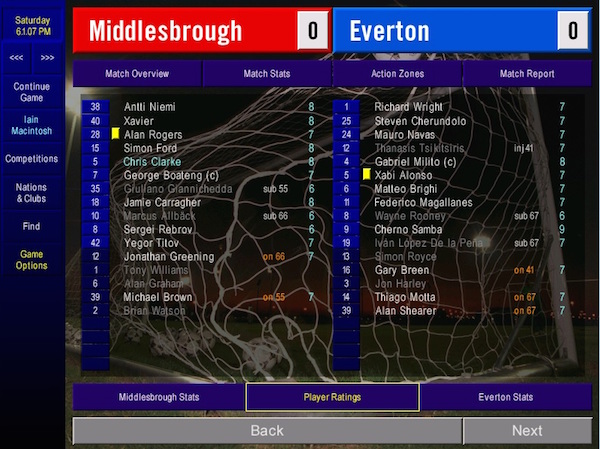 Our first Bosman signing of the year is confirmed. And it’s one for the long suffering supporters. Despite an offer from Barcelona, Pepe Reina has decided that his future lies at the Kings Dock. What an astute young man. He’ll put some pressure on Richard Wright now, currently the sixth best goalkeeper in the Premier League according to the ratings. 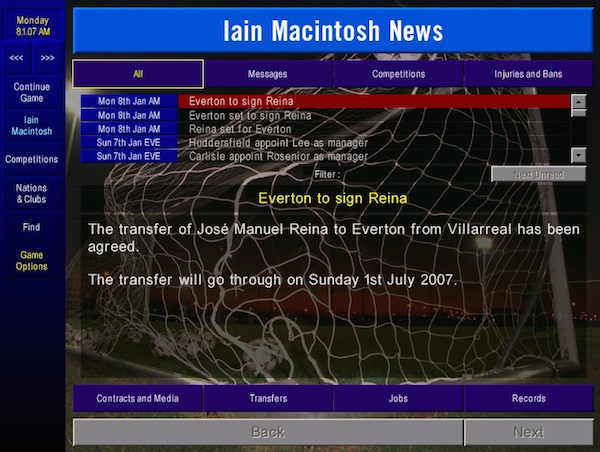 And he’s not the only one on the move. Given that 4-4-2 seems to be no more effective than the mad-arsed formation in any given situation, we have no need for an auxiliary winger. And now that Magallanes is sticking around, he and Cristiano Ronaldo will share the number ten duties. He’s always been a favourite of mine, but in this formation there’s just no place for Ryan Williams. 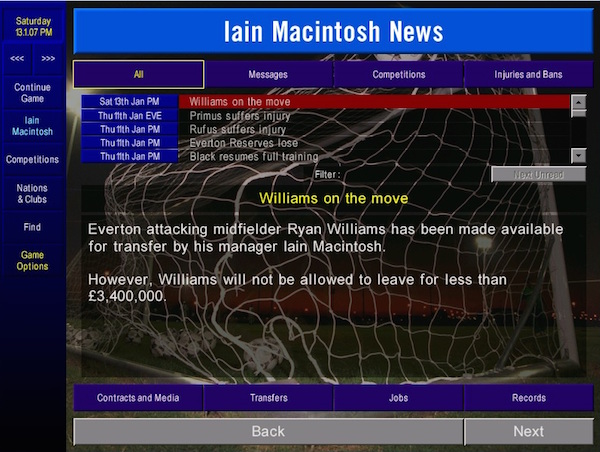 Manchester City at home should be a fairly straight-forward proposition. Tactically, they rarely trouble us and we’ve had the benefit of a few days rest. We’re two first picks down with Tsikitsiris and Alonso out, but we’re pretty strong. It’s time for Rooney and Samba to prove that I made the right decision with the forwards. 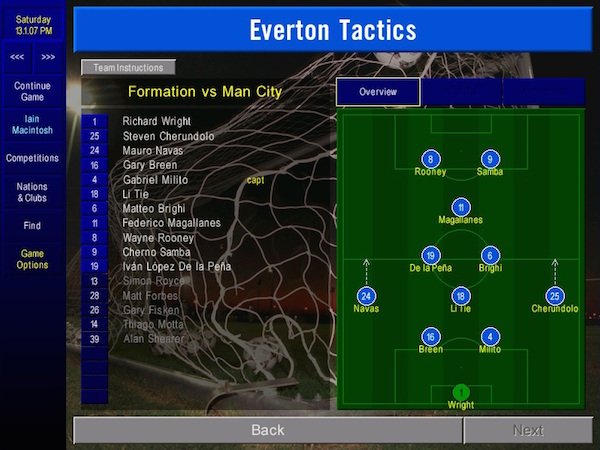 Sometimes, all you can do is shrug your shoulders, stride down the tunnel, march up the stairs, lock yourself in your office, pull that bottle of Daddy’s Little Helper out from the secret compartment in your desk drawer, empty it into your coffee mug and just let things work themselves out, you know? No, I’m not doing the fucking press. Send Alan Harper. I’m busy. 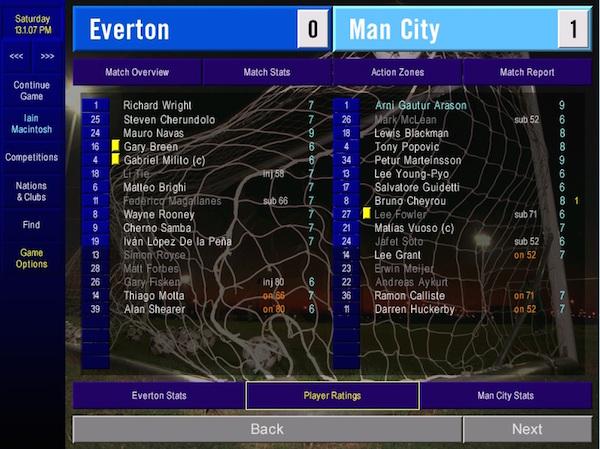 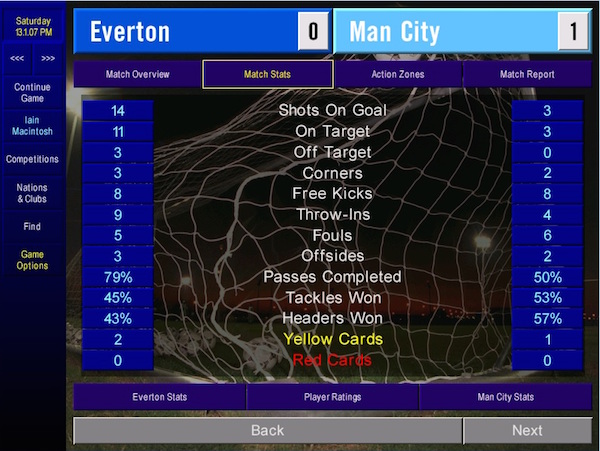 Three days later, I’m ready to get back on the horse. Middlesbrough. Again. All for a place in the fourth round of the FA Cup. There seems little point in making sweeping changes. It’s not like we actually played badly against Manchester City. And besides, who do we change? We’re hardly keeping any world class players on the bench, are we? Ronaldo returns from his four game suspension. Let’s take out or frustrations on these, shall we? 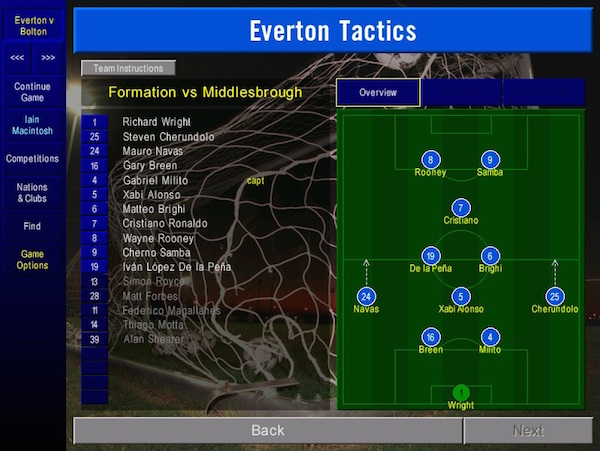 Yes. YES. Let the hate flow through you! That was absolutely brutal. A goal for Samba and another for Alonso before half time took away all the stress of the occasion and allowed Rooney a bit of rest before Bastard Bolton at the weekend. There was a first goal for Alan Shearer after the break and another from Matteo Brighi towards the end. Boro didn’t even have one shot on target. Dealt with. 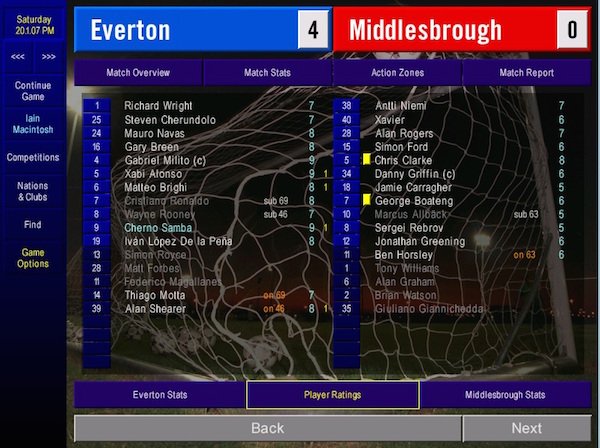 Bolton present a slightly different problem, but one that we’ve gradually worked out over the years. Sam Allardyce’s side aren’t as worrying as they used to be. They’re tough, they take some breaking down, but we usually get there in the end. Topper Harley comes in for the exhausted Mauro Navas, but that’s the only change. 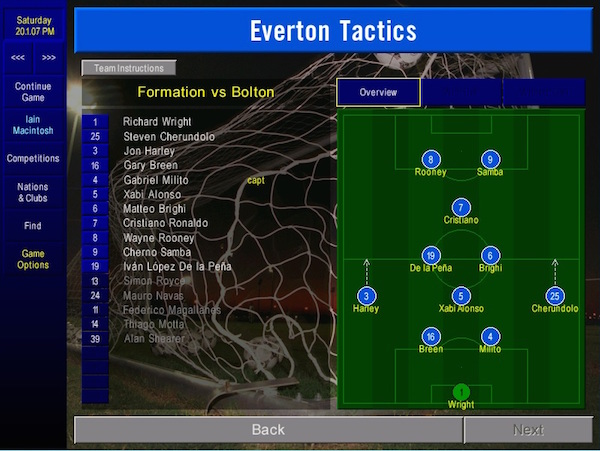 Very much the opposite of a standard Everton performance this. Bolton were good, they made as many chances as we did and they kept fighting all the way to the end. But it didn’t matter, two goals in seven minutes after half time secured a victory that wasn’t quite as comfortable as it looked. Yet another red card, this time for De la Peña’s needless shove on Mads Jorgensen, is a bit of a concern, but we got three points so I’m not massively bothered. What does bother me is the injury to Gabriel Milito. In three days we play Arsenal in the semi-final of the League Cup, our first ever semi-final. And now I’m doing it without my first choice centre-back pairing. 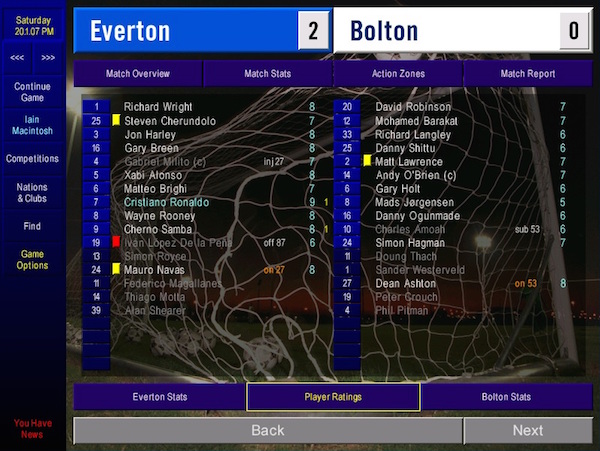 Arsene Wenger is in trouble. Arsenal finished eighth last season and they’re in ninth this season. His insistence on playing Rami Shabaan in goal is causing great consternation at Highbury where the locals are beginning to wonder if it might be time for a change. Chairman Peter Hill-Wood issued a vote of confidence last week, but if you’re thinking that this is a good time to play them, I’m not so sure. They’ve still got Ashley Cole, they’ve still got Kevin Phillips and they’ve still got one Thierry Henry. And we’re going in with Gary Breen and Richard Rufus. I’m not as confident as I might have been… 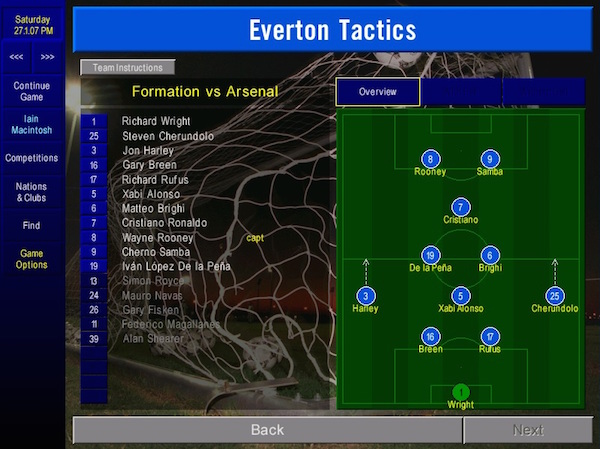 I will take that. I will take that result in my arms and cradle it like a new born. Despite the best efforts of my make-do-and-mend defence, Arsenal created 19 chances. I cannot recall the last time a team managed that against Everton. They were two goals to the good in the final minute and their supporters were already planning a big day out at Wembley. And then Magallanes, once again, came to my rescue. On for the desperately disappointing Rooney and dropped into the hole behind Ronaldo and Samba, he beat Shabaan to Harley’s cross and put us right back in the game. Now we have to take them back to the Kings Dock and make sure we do the business. Hopefully, we’ll be stronger by then. 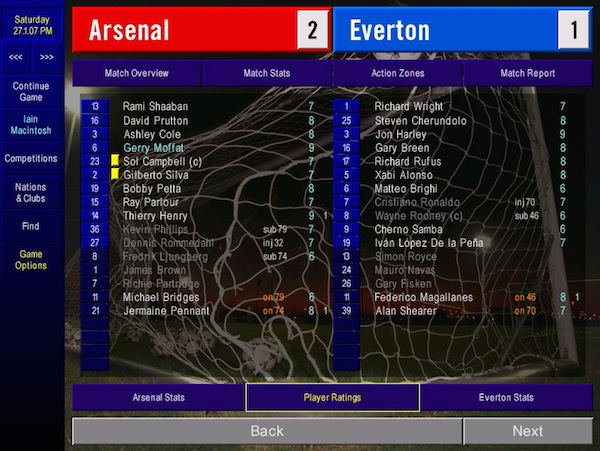 To wrap up the month, a chance to stride into the last 16 of the FA Cup. Cardiff City are pushing for promotion to the Premier League and, in Robert Earnshaw, have a striker that I’ve been looking at for a while. He’s scored 109 goals for the Welsh side since the game began. I’d love that sort of firepower. 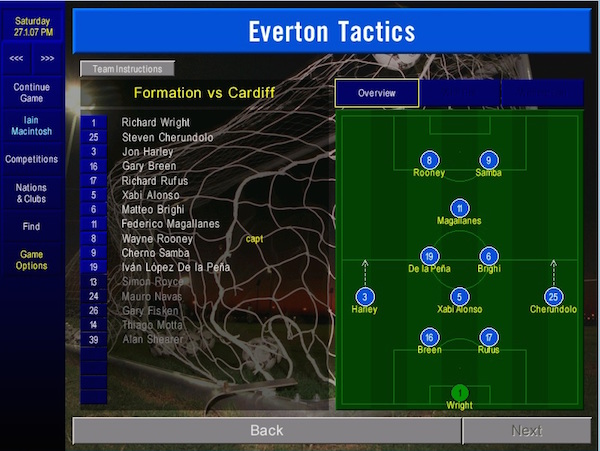 Not that it helped Cardiff at all. Rufus kept Earnshaw in his pocket and goals from Samba and Magallanes gave us an early two goal lead. Cardiff’s last minute consolation goal wasn’t fooling anyone. That was as straight forward as it gets. 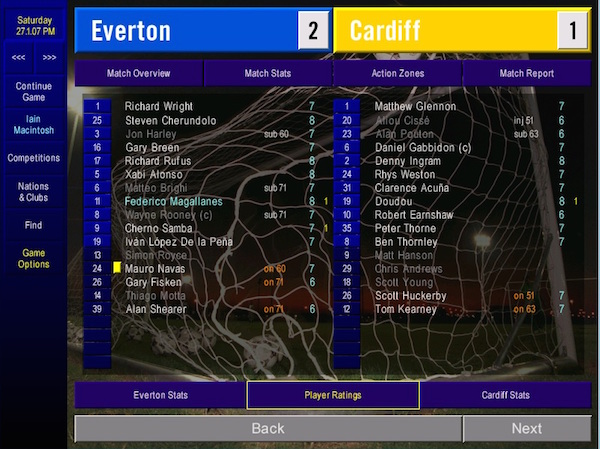 All of which leaves us in a very agreeable position. We’re six points off the top with 14 games to go, which is rather more than you’d expect from Everton. More importantly, we’re 10 points clear of Leeds in seventh. Even with our limited resources, I think we should be staking a claim for a regular place in the top six. A good home win against Arsenal will take us to the League Cup Final and we’ve drawn Sunderland at home in the FA Cup fifth round. I’ll be honest with you, we’ve had worse Januarys. 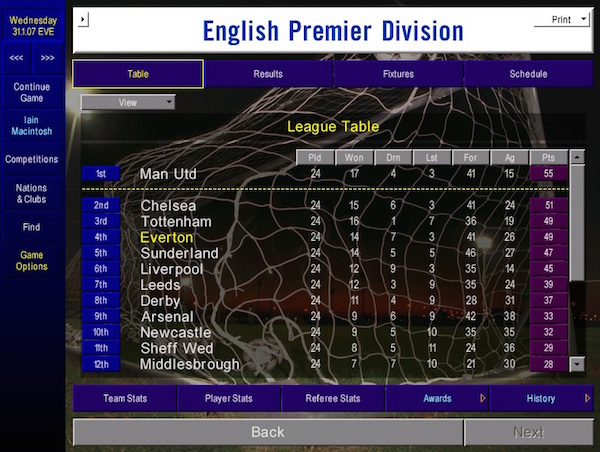 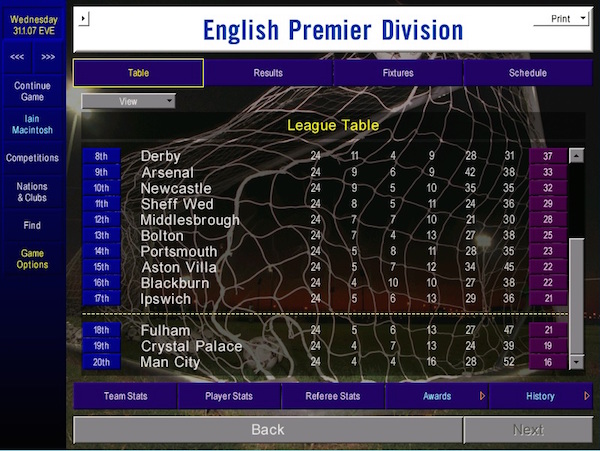