News of Everton’s passage to the League Cup final brought celebrations on social media, but they were bittersweet. For if we are successful on April 1, it will bring an end to this weird parallel universe. We will, like George W Bush, unveil our Mission Accomplished banner, but with the subtle difference that our mission will be accomplished.

But we have some football to play before all that. There is still a league title to fight for, an FA Cup to be won. We cannot afford to be distracted by thoughts of Wembley.

Portsmouth, under the stewardship of my predecessor David Moyes, are still too close to the relegation zone for comfort. We’ve been stung by the pace of Scottish legend Mark Burchill too often for me to feel calm about a trip to Fratton Park. Topper Harley has pushed himself forward and made the number 3 shirt he’s own. I’m proud of the way he’s applied himself. I always knew that it would take something special to oust Mauro Navas. We’ll need him, and everyone else, if we’re to fulfil our potential. 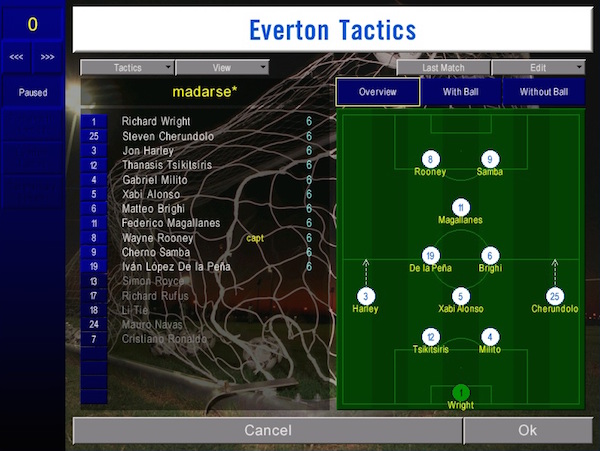 Easy. We’ve had precious few days when we could say that after a football match, but this is one of them. Three goals in 33 minutes wrapped this fixture up nicely and I’m not even slightly concerned by their late consolation goal. A goal from one of our strikers might have been nice, but if you can rest three players after an hour, you can’t complain about anything else. Strike up another three points. 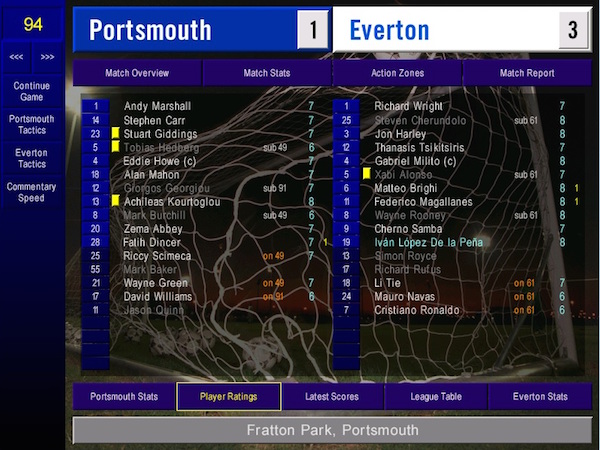 The last team you want to pull out in the FA Cup is Manchester United. They’re still the best side in England, they’re leading in the league and they’re likely to reach the latter stages of the Champions League too. And yet, I’m not worried. Home advantage will help, but honestly, I don’t think they’re much better than us. They are a superior side, obviously. They’ve got John Terry, Rio Ferdinand, Ruud van Nistelrooy and the game’s leading regen, young Jeff McMahon. But it’s not like the old days when sending a reserve team out would be a good way of saving the needless waste of our first team players’ fitness. We can take them. 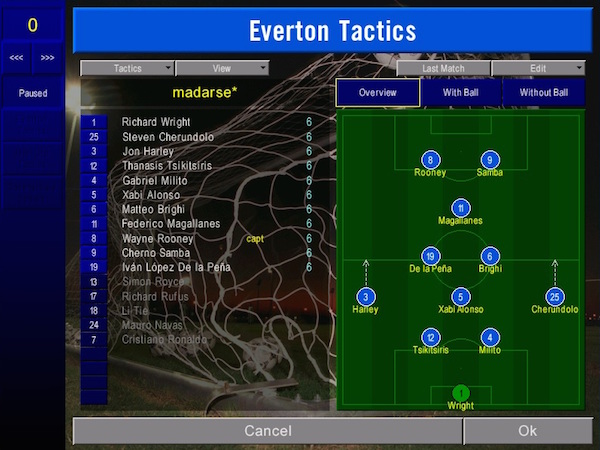 We didn’t take them. But we probably should have done. It was a game of few chances. United made three, put three on target and scored with two of them. Richard Wright did not come out with much credit and the impending arrival of Pepe Reina looks more and more justified. But we were good. We made six chance and put three on target, sadly on scoring with our last one in the 86th minute. I don’t mind losing like this. We can walk away with our heads held high. Besides, it’s only the FA Cup. We’ve got a final to think about. 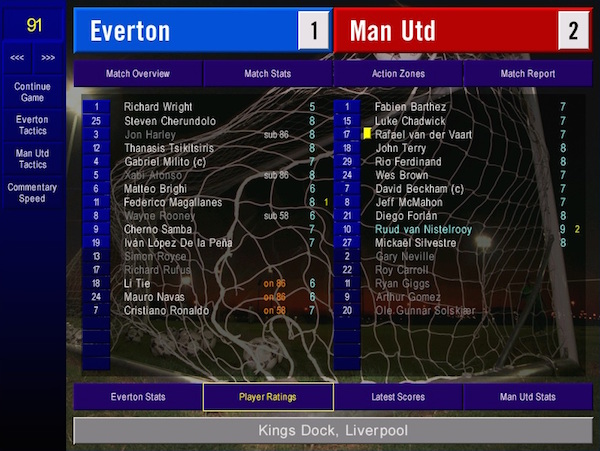 That final is still 13 days away, so there’s no real need to rest key players. And a good thing too. We’ve only ever played Sheffield Wednesday on four occasions, but they’ve put four goals past us three times. Steve McMahon’s side are solidly mid-table, but we’re not so good that we can afford to take this lightly. And there are two other good reasons why we have to win. Firstly, because John Toshack’s Manchester United are only seven points ahead of us and secondly because only two points separate our second place from Tottenham’s sixth place. And while sixth is a perfectly acceptable place for Everton to end up given our low wages and relative lack of revenue, it would be pretty disappointing all the same.

Changes therefore shall be kept to a minimum. Steven Cherundolo is one caution away from a suspension, so we’ll play Mauro Navas instead of him. We’ve also lost Wayne Rooney, but only for a week, so we’ll push Ronaldo up front. Let’s just get in, get out with three points and hope that no-one gets injured. 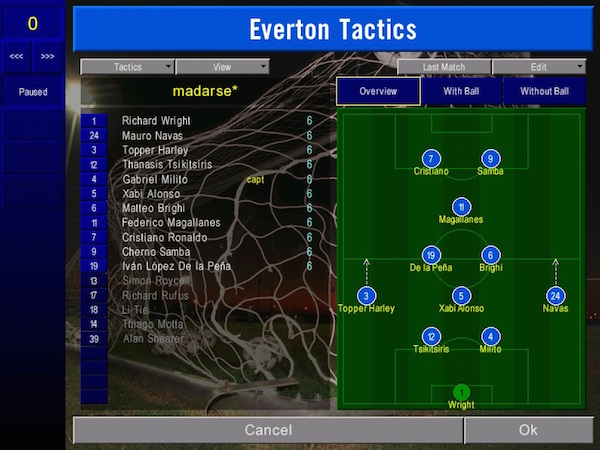 For fuck’s sake. McMahon is an absolute menace and his players are a disgrace. So’s Jeff Winter, who felt that three bookings was enough for that team of rampant fucking Visigoths. We lost Xabi Alonso after ten minutes. He’s out for a month. We lost Ivan de la Peña, he’s out for two months. We even had to haul Matteo Bright off before the end when his condition plummeted because of a suspect knee injury. Thank God, he came through unscathed. Yes, we won the game, battering the artless bastards all over the Kings Dock with ease, not even allowing them a single shot on target. But at what cost? At what cost? 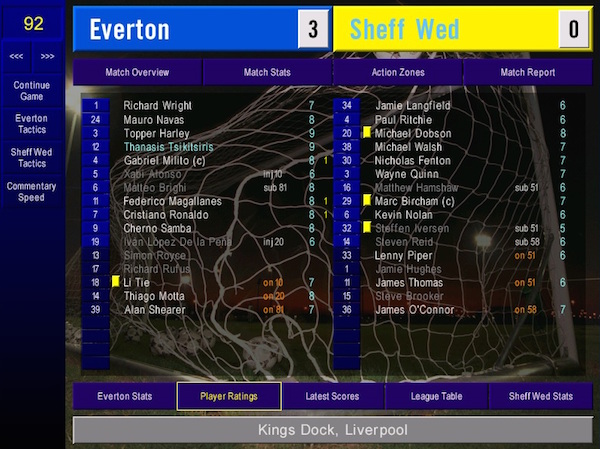 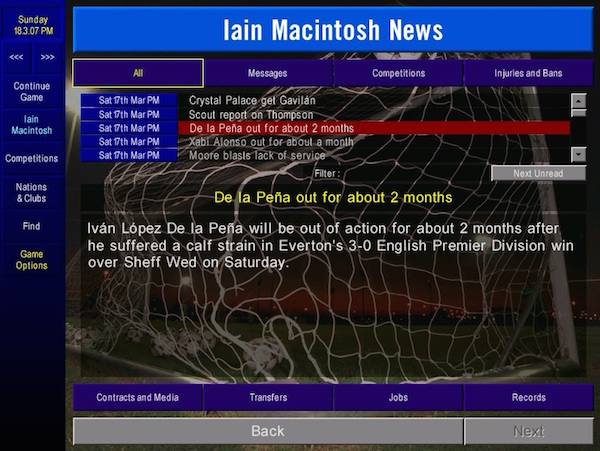 In the last days before we travel down to Wembley, the transfer deadline passes without incident. That means Zlatan Ibrahimovic and Ryan Williams will remain in the reserves. It also means that there will be no last minute reinforcements for the title push. We are what we are. But we are Everton. We approach our biggest test with courage in our hearts and residual traces of gin in our bloodstream.

As a team, we have experienced far tougher tests than this. Who can forget that first season when we travelled to Old Trafford in search of a point to secure Champions League football, and took it with Kevin Campbell and Tomasz Radzinski up front. And what about that second season when our poverty really started to bite and we were left to rely on the goals of Kwame Ayew to save us? The third season when the money only arrived in January, just in time to secure Cristiano Ronaldo and Richard Rufus, just enough to propel us to mid-table safety. The fourth where a crisis of identity led to a relegation battle, averted at the end with a sudden burst of form. The fifth brought respectability and so nearly brought Champions League football.

And now we stand here, in our sixth year together, upon the brink of silverware. What we do tomorrow will echo into eternity. Our names could live forever, winners of England’s third most important domestic honour. They will speak of us fondly in the future. They will say, “Remember where it all began? Wembley Stadium. April 1, 2007. Remember how we held each other close and cheered for Cherno, Cristiano and brave Topper Harley?” 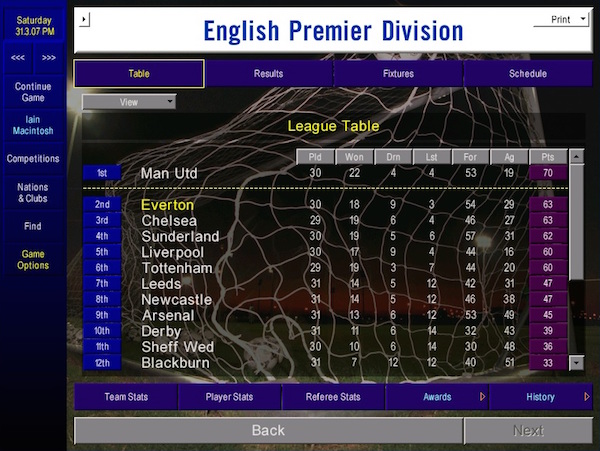 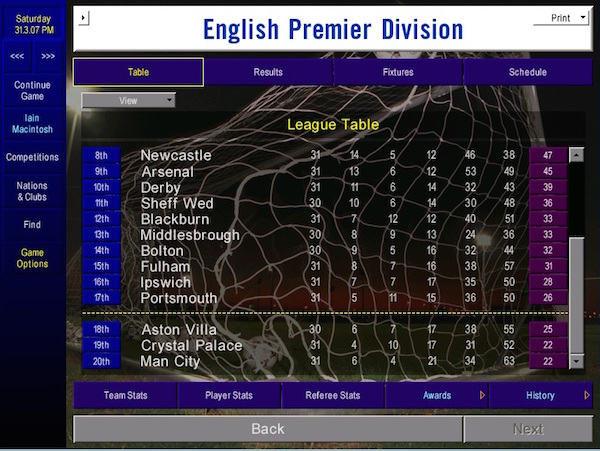 What else is left to be said, save for that which has been said already. Goodnight. Sweet dreams. We shall meet again in the field of battle.