Ah, it’s good to be back. Back where I belong. And what a beautiful sight greets me. The Kings Dock has never looked better than it does today; an entirely imaginary construct contained within a dusty, obsolete laptop in a small office in North London.

Shall we recap? I think we should. It’s been quite the adventure. It’s the summer of 2007. When I arrived at Goodison Park in 2001, the club was an absolute shambles. We were in eight figures of debt, the stadium was falling to pieces and the squad was so desperately poor that we had to play Mark Pembridge with a pace of three in midfield. And remarkably, even though we were immediately placed under a transfer embargo, we finished fourth courtesy of some very, very cynical football. And then it all went wrong.

We fell at the first hurdle in the Champions League and the first hurdle in the UEFA Cup. As we desperately hurled our terrible players into a series of increasingly reckless formations, we plunged towards the relegation zone as more and more parts of Goodison were closed on grounds of health and safety. But we survived. Two-thirds of the way through the third season, the club was bought and the debts were cleared. We finished mid-table.

With a modest budget, changes were made to team and tactics in the fourth season. And they didn’t exactly work very well. Down the table we plunged again, saving ourselves with a late run and claiming a surprisingly respectable 12th place finish. More consistency followed in the fifth season, though not quite enough to bag a place in the top four. We bottled that on the last day.

In 2006, we finally found our form. Not only did we win the club its first bit of silverware since the 1995 FA Cup, but we kept pace with John Toshack’s treble winning Manchester United and finished in second place with a points total that would ordinarily have been enough for the title. But that was it. The challenge had been met, the game was over. Except it wasn’t.

You voted overwhelmingly for the challenge to continue and for Everton to push for greater triumphs than what one of you so unkindly referred to as, “that piece of bollocks pisspot with three handles.”

And so, we go yet again. And as always, the first mission is to assess what we’ve got and, rather more importantly, what we need. This year, I’ve added the length of time remaining on the players’ contracts, as that sort of thing is quite important too. 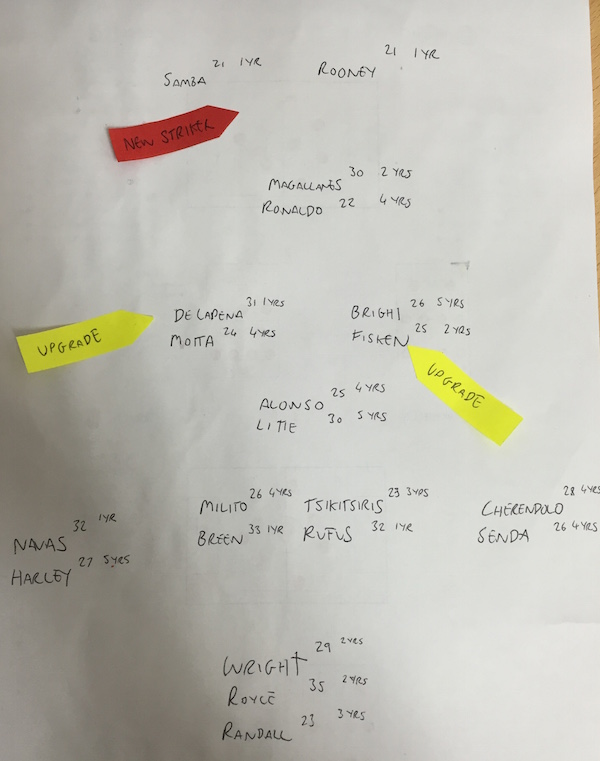 And as you can see, the big issue is up front. There’s no way back for Zlatan, he will stay on the list. Player-coach Alan Shearer is more coach than player. And so we need a third big name to back up Cherno Samba and Wayne Rooney. With Ronaldo and Federico Magallanes both capable of playing up front, we won’t need a fourth. 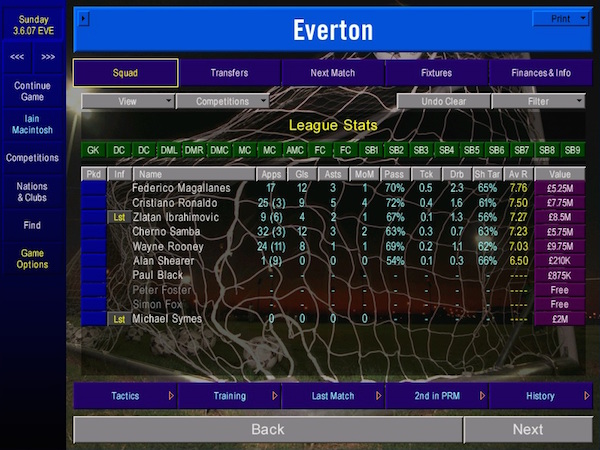 We also need to strengthen the midfield. Gary Fisken, bought from Barnet in our poorer days, isn’t good enough. I’ll try to train Thiago Motta as a central midfielder, rather than the attacking midfielder he is right now, but there must be a better option. 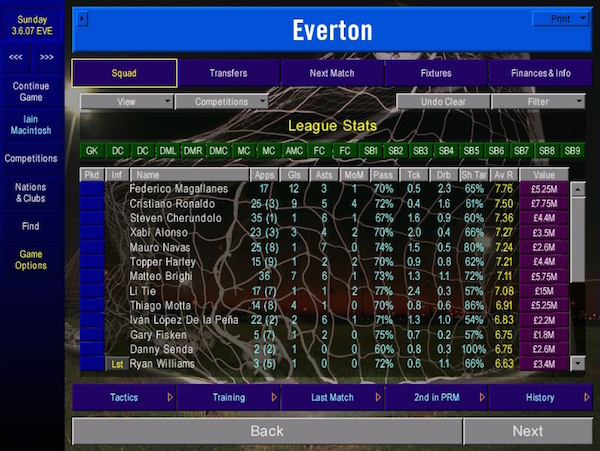 In defence, everything is absolutely fine. We need to extend the contracts of the older lads, but I’m happy with the quality we have in place. There is no better partnership in the country than Gabriel Milito and Thanasis Tsik…Tisik…Tsi….the Greek lad. 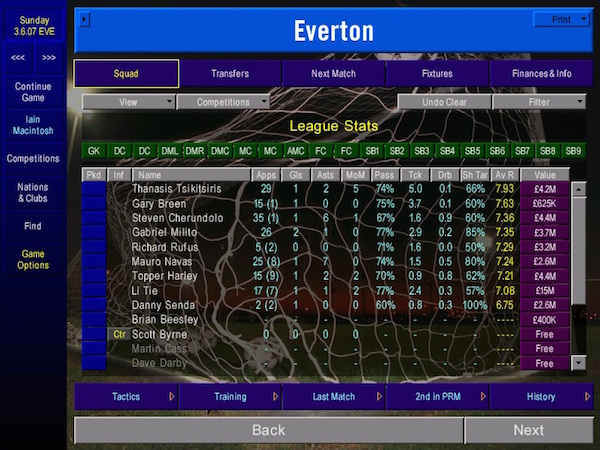 Richard Wright is 29 now and so it seems a good time to put him under pressure. As long term readers will know, he’s mostly brilliant, but occasionally awful and we can’t be sentimental about it. Pepe Reina is inbound. 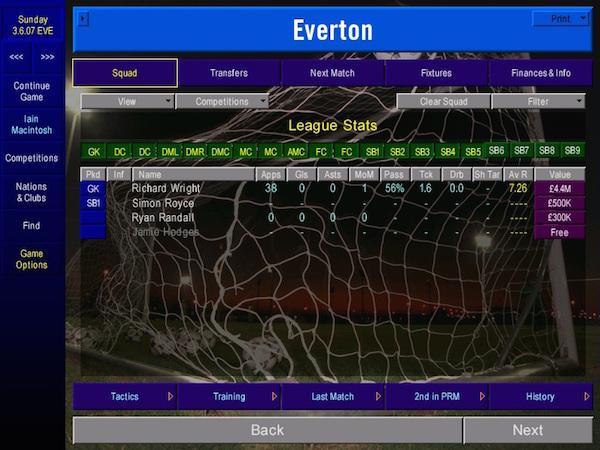 With 30 goals in 117 appearances, it’s fair to say that Samba hasn’t yet fulfilled his potential at Everton, but I believe in him and I’m delighted to have been able to tie him down for the best years of his career. We also have Rooney (61 in 195) in place for another four years. 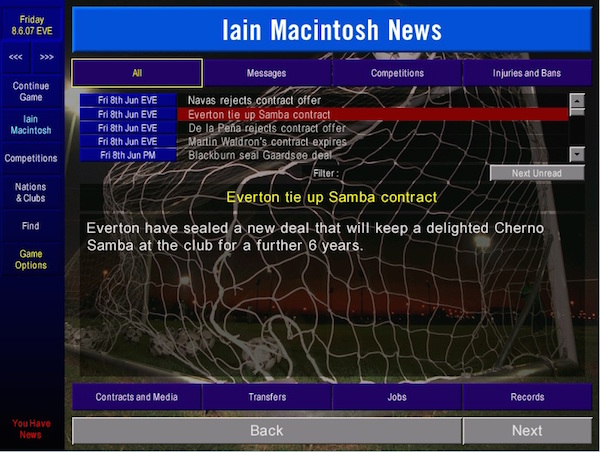 But we do have a bit of a problem with Motta. Not only does he refuse to learn the ways of the central midfielder, but he has apparently reclassified himself as a forward. That was not what I had in mind. 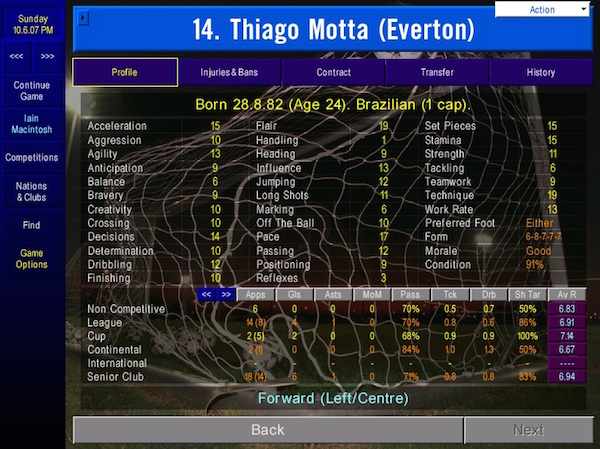 We’ll have to sort something out on that front, not least because the board have such high expectations. The very notion that Everton’s grandees could have expectations of anything other than fear and anxiety is testament, I suppose, to the great steps we’ve taken as a football club in six seasons, but I can’t help thinking that it’s tempting fate a little. I mean, success in Europe? So that would be the Champions League then? 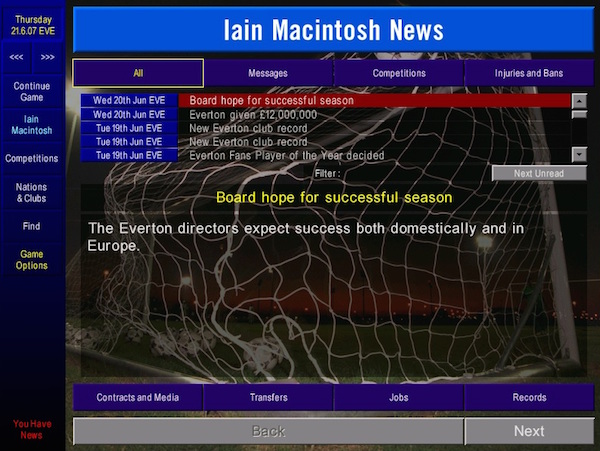 And if we are to succeed, we’ll do it without Alan Shearer, who has chosen this moment to retire. Initially, I am secretly pleased about this. He was on £25,000 a week and I’d be keen to spend that money elsewhere. However, for reasons I don’t entirely understand and certainly don’t condone, his wages as a coach have rocketed up to £60,000 a week, some 25% more than our next highest paid employee. That should go down well. 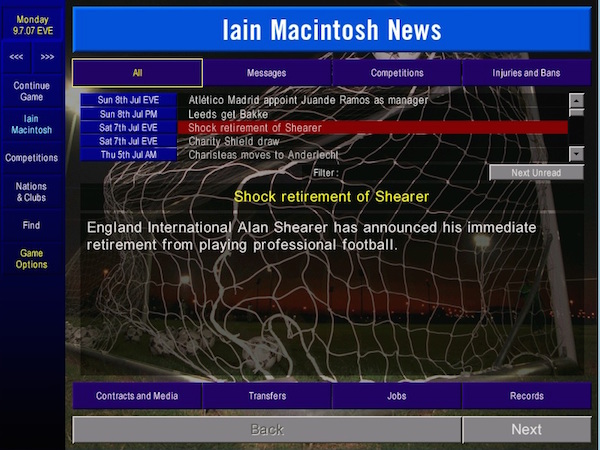 But these are trifling problems compared to the lot of Arsene Wenger. Having won the title in the first and third seasons, the Gunners have fallen off a cliff and the Frenchman has paid the ultimate price for two midtable finishes. 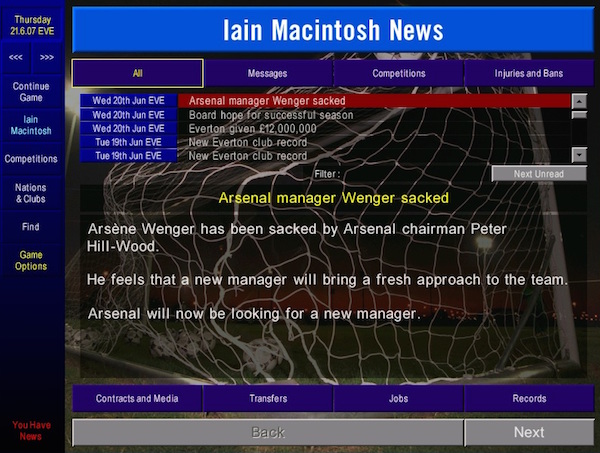 He’s out the door and a new man has arrived. But not, it is fair to say, the man anyone expected. 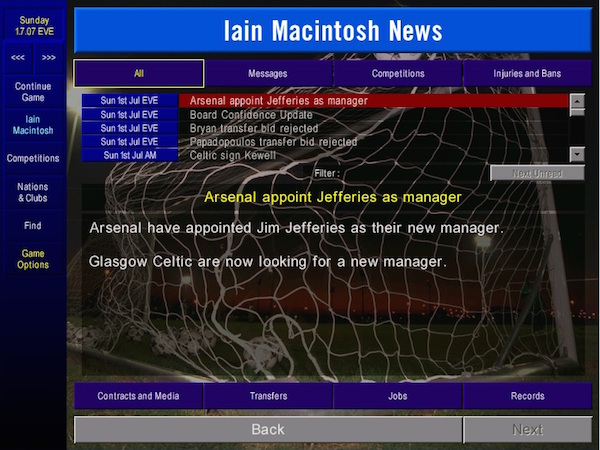 And in what we can only imagine was a hilarious fit of pique, Wenger executes the football equivalent of pointlessly seducing the wife of the man who’s knobbing your missus. 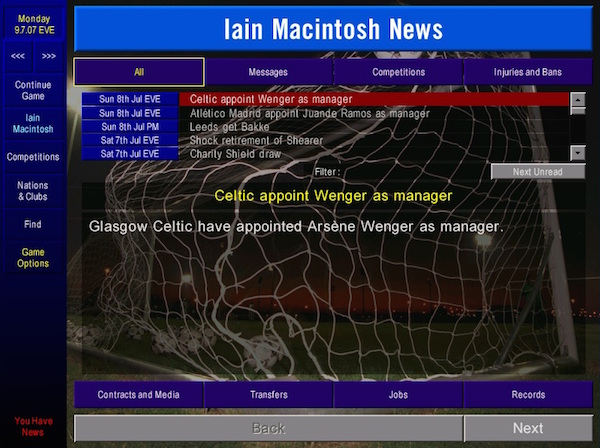 With an exciting pre-season programme of games against Southend, Ajax, Barcelona and Anderlecht, there’s much to look forward to this week. And as the season ends and the data is processed for the next campaign, initial bids are being prepared for the men who might just be able to lift this club to the next level. When that TV money drops, a whole £12m, we strike. And if we can shift that useless lummox Ibrahimovic, we can really have some fun….