The hangover has cleared, the street cleaners have done their work, the city has returned to normal. It’s time to move on from our League Cup triumph and look to the future. We asked you what that future would look like and the majority of you said that the future was bright, the future was blue. And so we go again. With eight games to play and a gap of seven points between us and Manchester United, the title race is still sort of on. But we have Liverpool and United next, so we’re either going to force our way into contention or fall out of the Champions League places.

Ged Houllier’s overpriced cloggers are up first at Anfield and they have a full strength squad to choose from. By contrast, we’re a little weary after our Wembley heroics. But I back my boys to keep this run going. It’s the same starting line-up again. 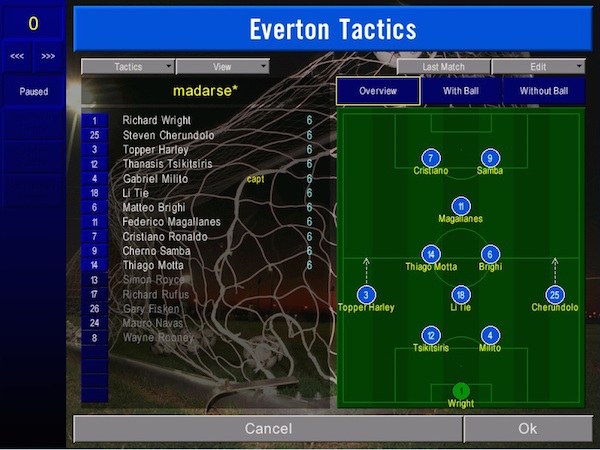 Curses. After so much happiness and joy, we are swiftly brought down to earth by our wretched, ungainly and profoundly irritating neighbours. El Hadji Diouf puts Liverpool into an early lead and it’s only the heroics of Richard Wright that keep us in the half. Cherno Samba scores an equaliser that we scarcely deserve and I’m delighted to get them all in at the break with the scores level. Our midfield has been abysmal, our game never got going and Topper Harley needs to show me the fucking hole he’s been hiding in all afternoon. Mauro Navas and Gary Fisken come on at the break. We improve markedly and begin to make chances. Liverpool make only one. But they score with it. Three days after our proudest moment since 1995, we’ve been shamed by those red bastards again. It’s enough to make you sick. Though that may be the last vestiges of the hangover. 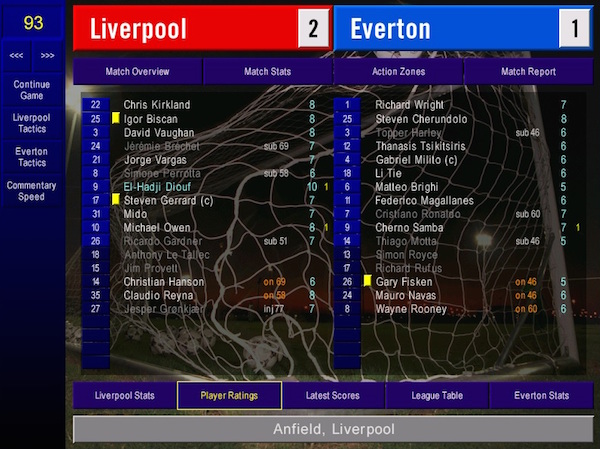 When you lose, you want to recover again quickly. You want a nice easy home game and a chance to score some morale-boosting goals. You do not want Manchester United. But perhaps there’s a chance, Runaway leaders they may be, but they just got beaten by Celtic in the Champions League and they needed extra time and penalties to get past Newcastle in the FA Cup semi-finals.  Topper Harley gets a rest for this and Mauro Navas replaces him on the left. Let’s hope we can ride out this developing storm quickly. 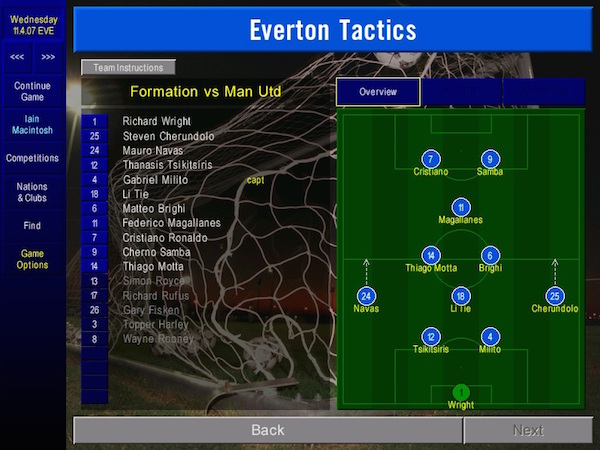 And we are back in the title race. That was a little tighter than I would have preferred, but you can’t quibble when you beat Manchester United. Two first half goals gave us a cushion that even a second half John Terry header couldn’t puncture. We were confident and bright throughout, never outmatched, never out fought. We can exchange punches with the very best in the business now and, by thunder, those boys make me proud. Except for Wayne Rooney, he was bollocks again. 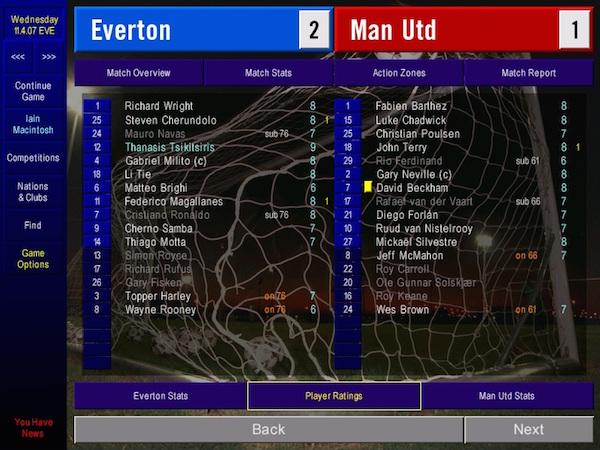 Steve Bruce’s Sunderland are still very much a force in English football and they’ll be fighting all the way for a Champions League place. They play a 5-3-2 with the traitor Li Weifeng at the back and an awesome attacking trident of Pablo Aimar, Matt Piper and Tore Andre Flo. We are tiring rapidly, this is our fourth game in a fortnight. But with Ivan de la Peña and Xabi Alonso still injured, a blunt Alan Shearer and a sulky Danny Senda, there isn’t much room for rotation. We’ll have to go with what we’ve got. 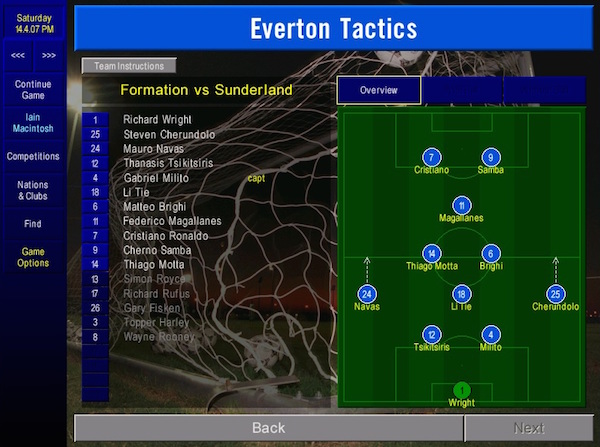 Another tense afternoon, but once again, another fine result. Tore Andre Flo gave Sunderland the lead and I feared the worst, but somehow we pulled another recover out of the bag. Federico Magallanes hit his eleventh goal of his half season, Thiago Motta put us ahead and it was only a shame that the referee ruled out a third by Cristiano Ronaldo. You can see the fatigue in the team though. We’ll have to rest Steven Cherundolo and I honestly don’t know what to do with Rooney. But we’re five points ahead of fifth placed Sunderland now and four points behind United, albeit having played a game more than them. Somehow we need to keep it going. 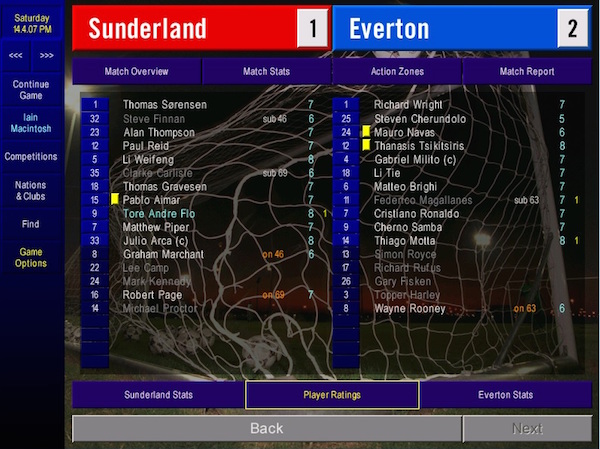 But the fixtures keep coming, thick and fast. There’s no let up in frequency and there’s no let up in quality. Arsenal are the next visitors to the Kings Dock and I need to make changes. Cherundolo comes out, Thanasis Tsikitsiris comes out, Matteo Brighi comes out. They’re all exhausted. So we’re asking a lot from our fringe players now. And it might be nice if our strikers stepped up and scored a goal or two. You know, just to help out. 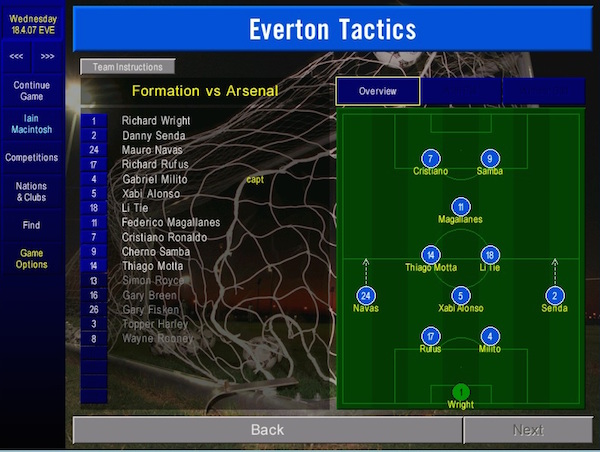 The biggest problem with Arsenal, who are struggling down in mid-table under an increasingly beleaguered Arsene Wenger, is Thierry Henry. It doesn’t matter that the Gunners are out of sorts, he continues to score at an alarming rate. So you can imagine how pleased I am when he makes a hideous challenge on Richard Rufus and gets himself sent off before half-time. But it doesn’t actually make our job any easier. We’re flat and we’re not making chances. Worse still, Xabi Alonso is carried off on his first game back from injury. I let things ride until the 68th minute when, with a goalless draw threatening to cause untold damage to our season, I throw Rooney on for Li Tie and we go with three up front.

But that isn’t the change that makes the difference. It’s the swap of Navas for Harley that finally breaks Arsenal down. He tears them apart, first creating a goal for Danny Senda, then wining the free kick that allows Ronaldo to find Milito for the second. A third from Cherno Samba is just a pleasant little cherry on a great big cake. Manchester United didn’t play. They have two games in hand. But we’re only a point behind now. And they overcame Celtic in the second leg of their Champions League clash, so they’re still fighting on several fronts. That’s for the optimists. For the pessimists, we’re now eight points clear of fifth placed Sunderland with four matches left to play. In other words, a win and a draw will put us in the Champions League. 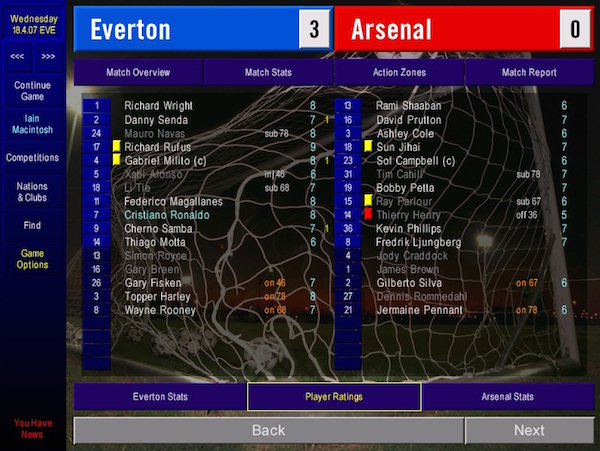 You’d think, on balance, that I’d be glad to see a trip to Fulham on the fixture list, but we’ve had problems with the Cottagers in the past. They did us at home back in November when we weren’t expecting it. And I have a quandary. Do I keep faith with the fringe squad that did so well against Arsenal, or do I return the first teamers to the fray? It’s a difficult one, but you have to keep in mind that we were poor against the Gunners for much of the game. Senda scored, but he only got a seven. Rufus was magnificent, but Tsikitsiris has been one of the players of the season. And we can’t really play without Matteo Brighi, now he’s fit again. We’re back to whatever passes for full strength in these parts. 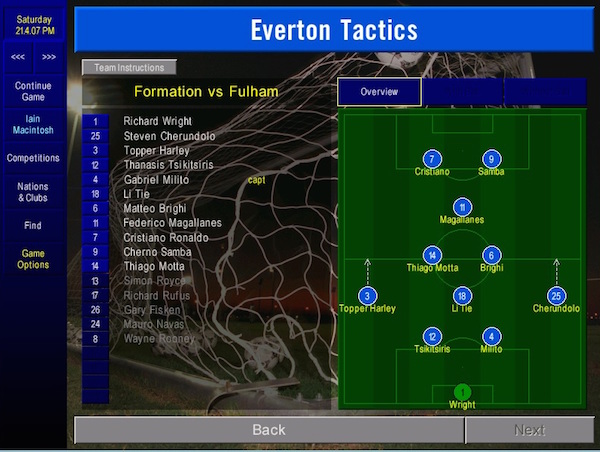 We make the perfect start. A Magallanes solo effort, his 476th solo effort of 2007. But we’re vulnerable throughout the first half and Fulham make as many chances as we do. Tsikitsiris has his hands full with regen Jamie Laws and Li Tie is struggling to shut the game down. I give them until the 58th minutes and then make chances using Brighi in the defensive role and pushing Fiskin up front. I also stick Rooney on in the hope that he can find some form somewhere. I’m 50% vindicated. Brighi dominates the game, and this is the first time he’s ever played back there, and goals from Harley and Motta secure the victory. But it’s another dull performance from Rooney. What has gone wrong with this boy? Still, who cares? We’ve won again. And, though United haven’t played yet and have three games in hand, we’re top. It lasts for only 24 hours, United beat Middlesbrough with ease the next day, but it does feel nice. Like we’re trying out a comfy sofa. 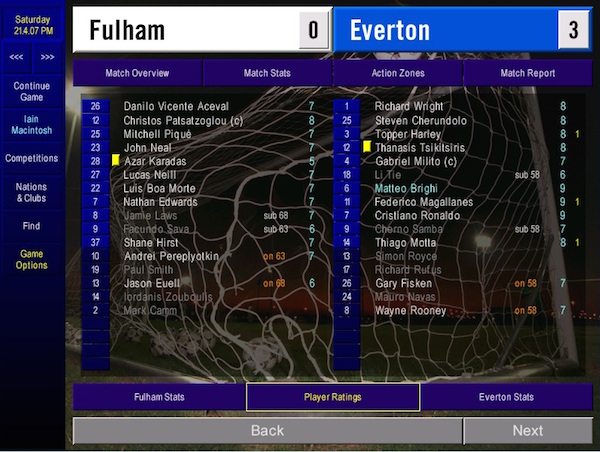 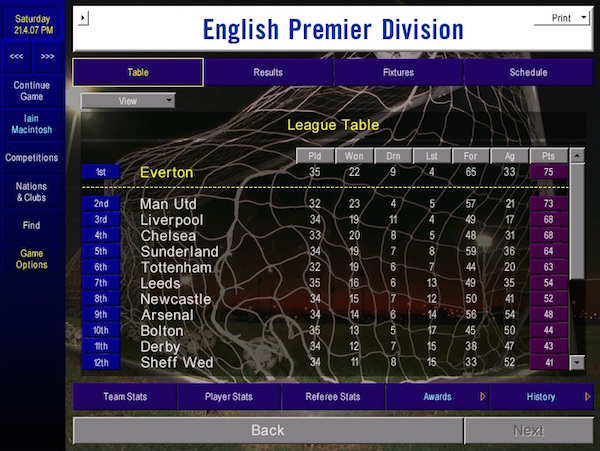 And so April ends with the visit of Leeds and the chance to secure Champions League football. We have the Sunday slot, which gives us the opportunity to watch United away at Derby County and to see if the pressure begins to tell on them. It does not. They win 5-1. Chelsea win too. But Liverpool lose and Sunderland draw which means that a win over Alex McLeish’s Leeds, currently in seventh, would ensure Champions League *group stage* football for the first time ever. So no pressure, lads. Thank God that Ivan de la Peña is back. 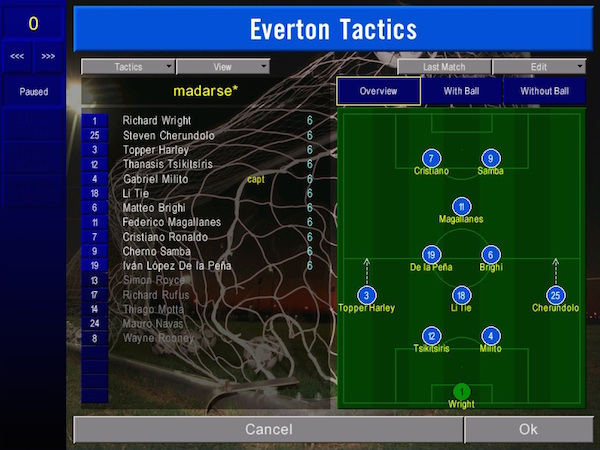 A typical Everton game. Just when I thought we’d consigned them to memory. Paul Robinson is the undisputed man of the match, and it’s hardly surprising. We have 13 shots, nine of which are on target. Robinson stops all but one of them. And naturally, Mark Viduka pops up with six minutes to go to deny us a win. Added misery comes in the form of an injury to Topper Harley that wipes him out for the rest of the season. 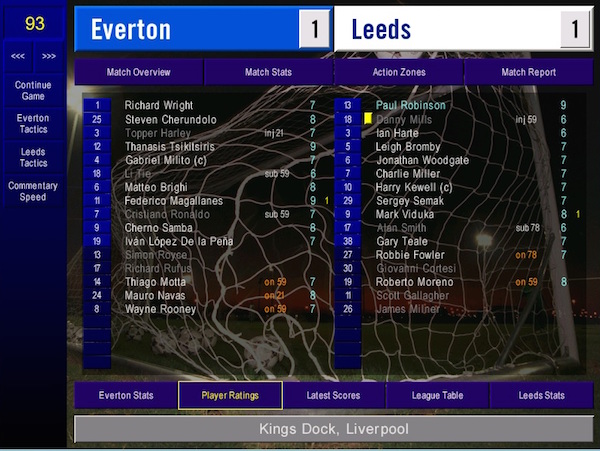 We need to get a proper goalscorer over the summer. Samba has 11 in 30, Ronaldo has nine in 24, Rooney has seven in 23 and Zlatan hit four in nine, which actually looks quite good now. He’s injured, by the way, so put any thoughts of a u-turn out of mind. We need a predator. We can still technically win the title, but United are going to have to really, really mess this up. As for us, we’re in the top four whatever happens. A single point in our last two games will guarantee a top three finish. But we need a result from our final two games last season. That didn’t go too well… 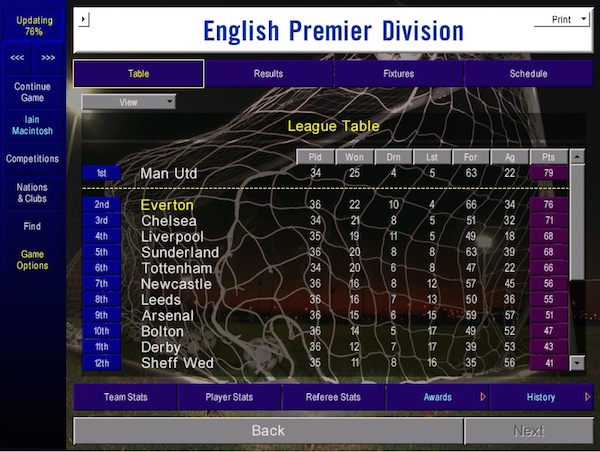 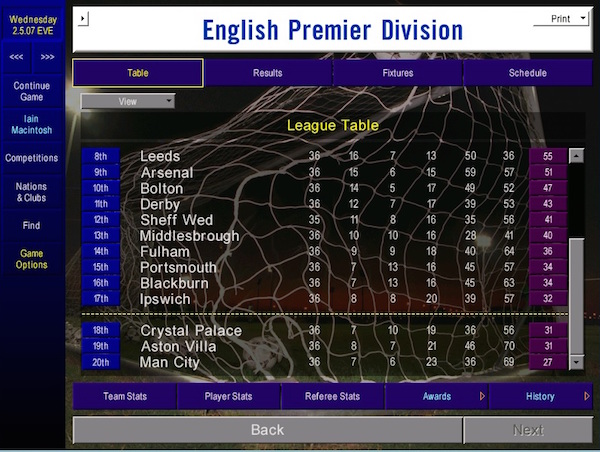