The title, I fear, is out of reach now. With two games left, I’d still back us to close a three point gap on Manchester United. But not when United have got four games left to play. That trophy will have to wait. But there’s no reason why we shouldn’t keep going as if we still had a chance. And besides, for Everton, disaster is only ever one result around the corner. There’s still a chance that Liverpool could knock us out of the top four. And that would be intolerable.

It’s hard to tell. We’re tired, there’s no doubt about that. We’ve been playing the same formation and, where possible, the same players. Changes have been kept to a minimum. But that means that legs are getting heavy. Federico Magallanes should be okay. He’s really only played half a season after that unfortunate decision to stick him on the transfer list when we were broke and desperate for reinforcements in other areas. It’s fair to say that he’s made me regret that decision and rejoice that I reversed it. But the rest of them are growing weary.

We’re also playing a Blackburn Rovers side that isn’t safe from relegation. This is their last home game of the season. But this isn’t the time to suddenly rotate players. I need one more effort to get us over the line. Mauro Navas comes in for the injured Topper Harley, but that’s the only change. Good luck, boys. 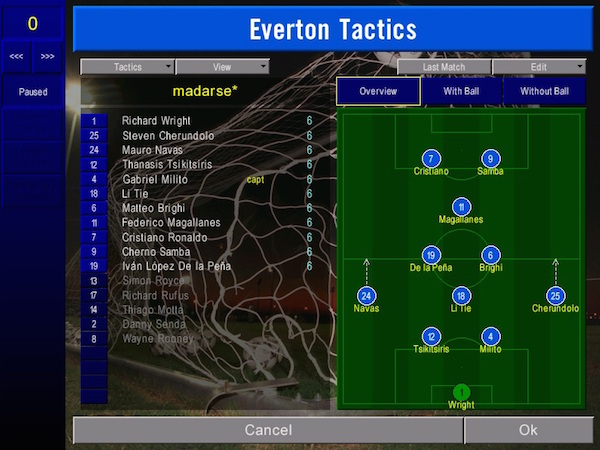 We’re there. Whatever happens, we’ll be in the group stages of the Champions League next season and we owe so much to Magallanes. This wasn’t easy. For 74 minutes, it was a familiar tale of pressure without goal. Then Magallanes, and Navas, stepped up. By the end, it all looked very easy. It wasn’t, but that’s not a bad impression to leave. This has been, by some distance, the best season in Everton’s history since 1987. 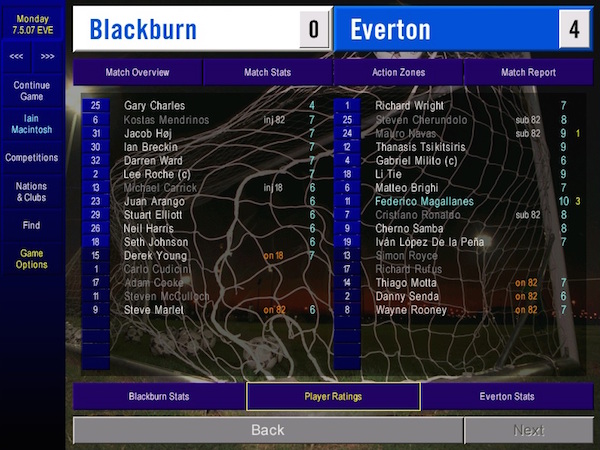 But the title race is over. Two days later, Chelsea draw with Manchester United and that single point is enough to secure the title for John Toshack. On the bright side, it’s also enough to guarantee second place for us and condemn Liverpool to the Champions League play-offs. Munch on that, Ged. United’s double follows that weekend, a victory over Liverpool in the FA Cup Final on penalties. They are a great team and I congratulate them on their triumph. But we’ll be back. Oh, we’ll be back. We may be £7m in debt and utterly unable to fund the reinforcements required to step up and match Europe’s elite, but we’ll find a way. 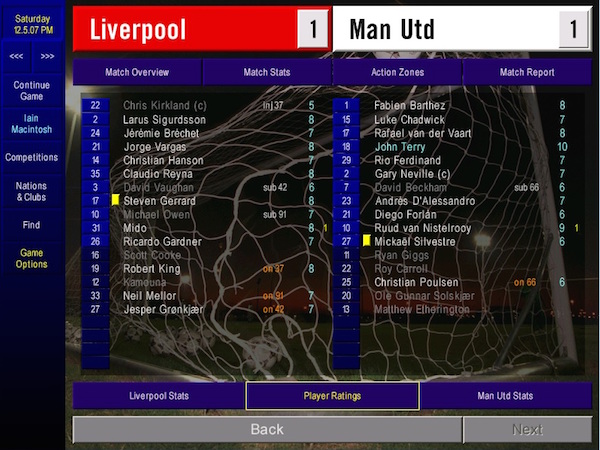 We end the season at the Kings Dock, with a relegation-threatened Aston Villa as our guests. I have no intention of making life easy for them, so there will only be one change to the team. Wayne Rooney comes in for Cristiano Ronaldo. I want to see the season off with a victory and send the fans off on their summer holidays with a spring in their step. 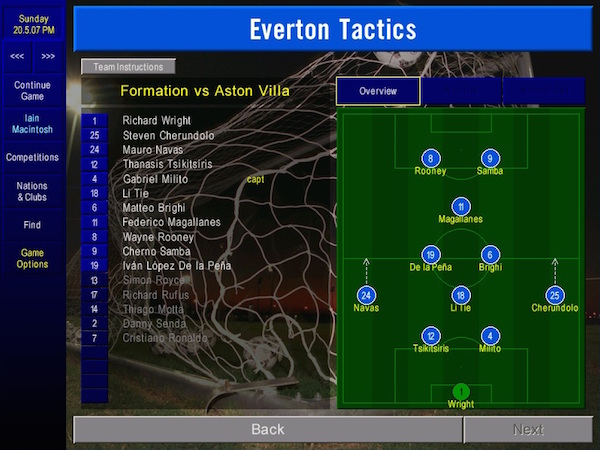 Well, that was a little unexpected, but a grandstand finish is always pleasant. We took the lead early, through Cherno Samba for once, but found ourselves 1-2 down early in the second half. Ending the campaign with a home defeat would be disappointing and so a merciless triple substitution is made, with two of my best players sacrificed for fresher legs. Off come Magallanes, Steven Cherundolo and Ivan de la Peña. On come Danny Senda, Thiago Motta and Cristiano Ronaldo. It does the trick. Matteo Brighi, surely the best £10m spent this season, equalises and then, with ten minutes left, Rooney hits the winner. A green shoot, perhaps. A hope that he can recover from his miserable form and retake his place in the team next season. Everyone goes home smiling because Ipswich lost and Villa are spared the drop. What a lovely way to end the season. 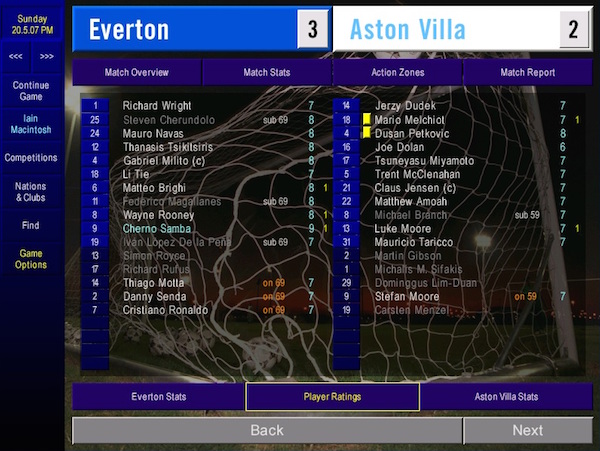 And we also have the consolation that we’ve missed out on the title to one of the best teams this game has ever seen. Manchester United’s victory over Borussia Dortmund in Paris gives them their second treble and makes us all feel better about finishing second. Though, it must be said, how typically Everton it is to win 24 games, crack the 80 point barrier and do it all in the one season when it’s not even nearly enough to land the title. Sigh. 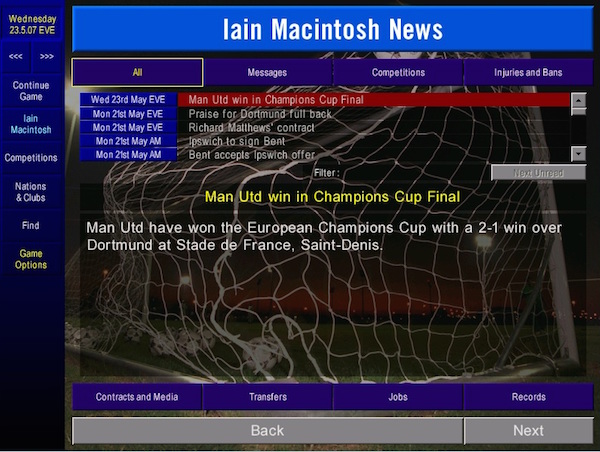 But there’s not much to complain about really, is there? Fewer defeats than any other team. For all the frustration with the strikers, more goals scored than any other team. And, of course, Champions League group stage football. We’ll learn from this, you know. We’ll come back brighter and stronger. And we’ll need to. We’re not pissing around in mid-table any more. From here on in, we should be in contention for trophies every single season. That’s the new challenge. 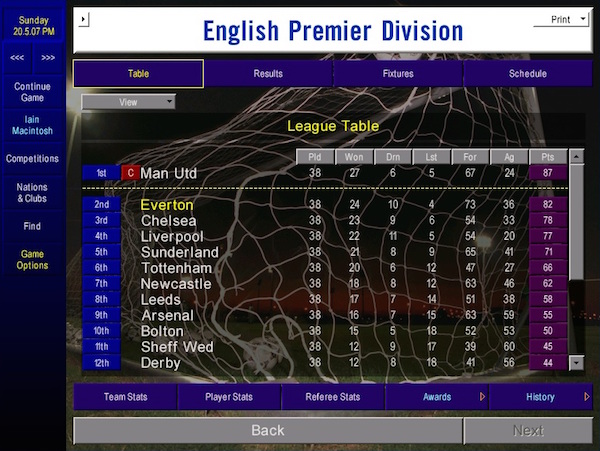 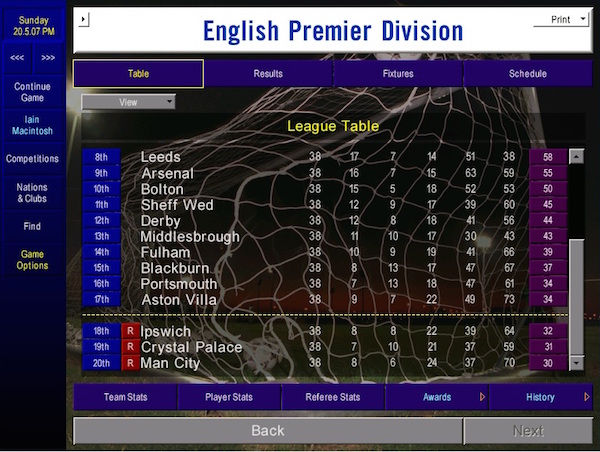 THE CHAMPIONSHIP MANAGER 2001/02 PROJECT WILL RETURN IN MID-JULY WHEN IAIN MACINTOSH RETURNS FROM FRANCE AND GETS OVER HIS RIDICULOUS NOTION OF ACTUALLY WRITING ABOUT REAL FOOTBALL FOR A BIT.