I feel weirdly confident now. Like the captain of a small ship, battered by one hurricane after another, but still chugging away across the ocean. We’re fourth, we’re doing well in the cup, we’re scoring lots of goals. If that catastrophic early run couldn’t sink me, nothing can sink me. Except Newcastle, of course.

Newcastle are always a threat. I don’t know why they don’t win more trophies. I can only presume that the curse that dogs them in real life has followed them into here. The most important thing to do is shut down Paul Scholes, but that’s not it. You still have the industry of Mark Kerr to deal with. And don’t even talk to me about Carl Cort. He always scores. We’re stable enough at the back. With no European commitments, we can be happy with our Harley/Greek Lad/Milito/Cherundolo back four, but we’re weak in the middle.

I can’t keep asking 21-year-old David Bryan to play every single game. Given that no-on seems interested in their services, I take David Pizarro and Xabi Alonso off the transfer list and restore them to the first team. The board take an instant dislike to that, expressing their view once again that neither man is fit to wear the shirt. I’ll just have to deal with that. If I lose either Bryan or Brighi to injury and I don’t have sufficient cover, I suspect they’ll conclude that I’m not fit to manage the team. 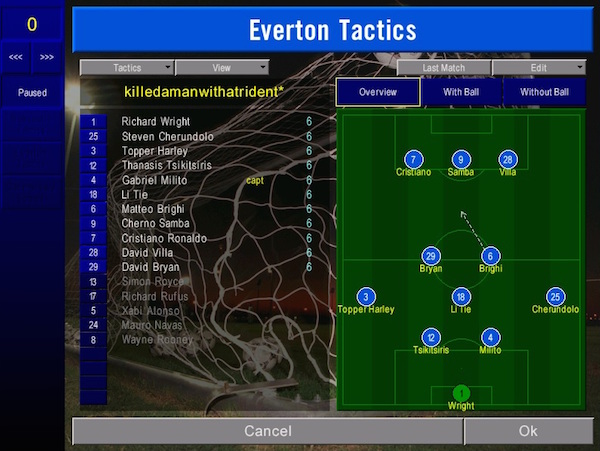 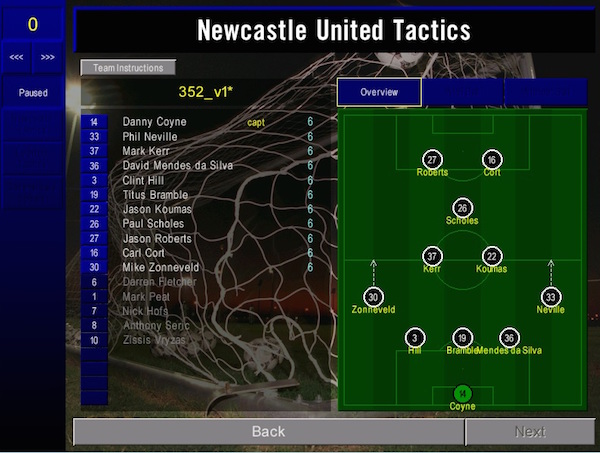 The first half is a disaster. We’re on the back foot from the start and Carl Cort (obviously) heads Newcastle into an early lead. We can’t get a single shot on target and it’s even worse when Cherno Samba is carried from the field with a thigh injury. I’m forced to push Ronaldo into the central target man role with Rooney in the creative free role. Xabi Alonso then joins the fray, along with Mauro Navas and we start to seize back control. The chances pile up, but Danny Coyne is equal to everything. Then, with four minutes to go, with lose the Greek lad to injury and we’re down to ten men. There’s no coming back from this. 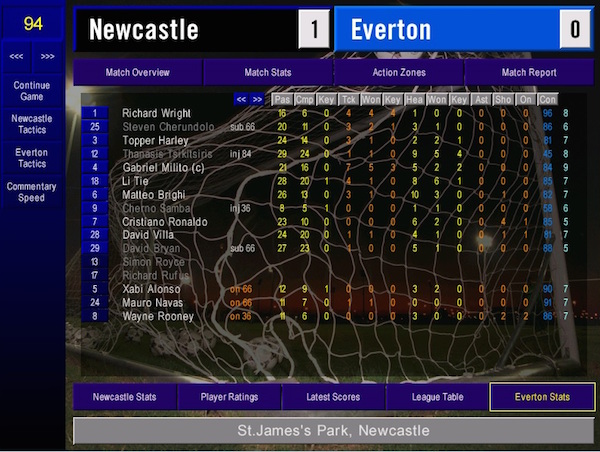 We need to get back on track, something I find myself saying quite frequently these days. Fortunately, we have exactly the sort of fixture you want when you’re in a bind. We’re at home to Portsmouth. Portsmouth do not do weird things that require thought to counter. They play a simple 442 and they do it in the way that leaves their wingers high up the pitch and vulnerable. I’m not fucking around here. Anything less than a win and I will be chucking stuff around the office. Cherno is out, so Zlatan will have yet another chance to prove himself in that role I created specifically for him, and Richard Rufus steps in for the Greek lad. 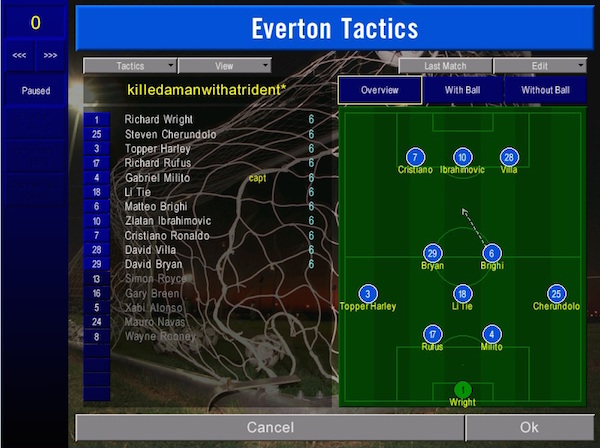 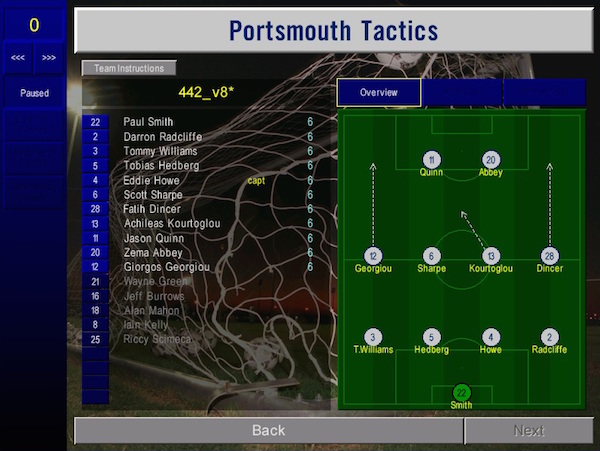 Well, you have to say that this went well. Very well indeed. Five goals before half time are a pleasing feature of any game, particularly when three come from Zlatan and two are added by Ronaldo, both of whom are playing in specially micro-managed roles. As tempted as I am to shut absolutely everything down at the break, I stop to think about the fans. And you know what? We don’t do that often enough. We are nothing without those guys. They pay their money to watch us play, not just in the good times, but in the bad. Everything we do is powered by them. And they deserve to have an entertaining afternoon. So fuck consolidation. Fuck playing it safe. I make a few simple changes to keep everyone fresh and switch to attacking mode. Five nil is great, but let’s see if we can get ten, eh?

The game ends 5-0. Sometimes I wonder if I’m wasting my life. 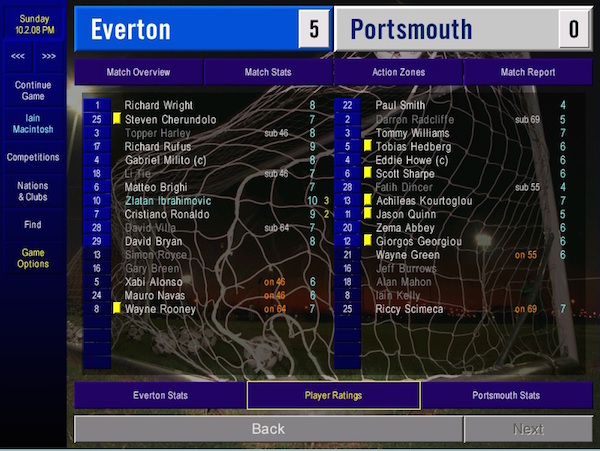 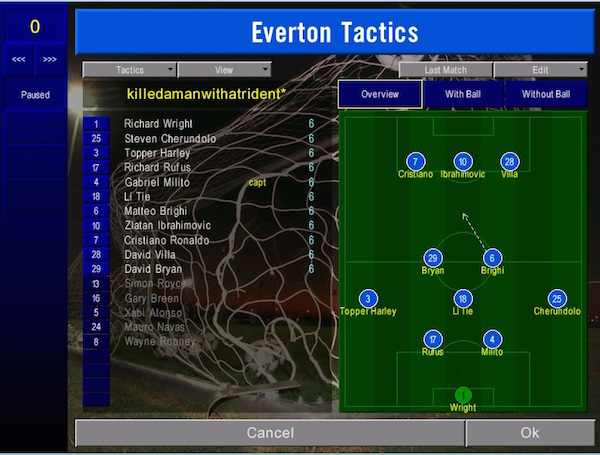 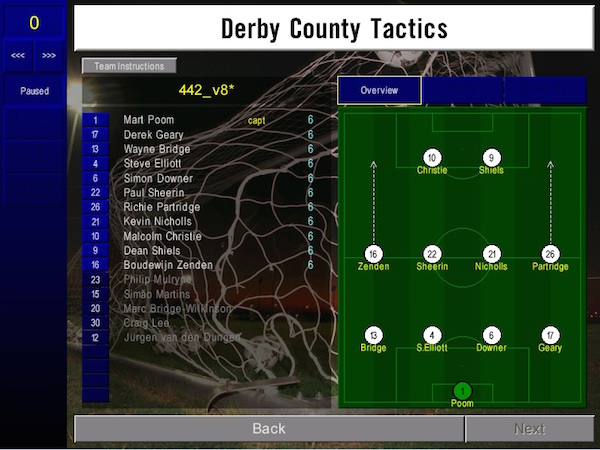 Hmmm… not too shabby. Very much the same sort of game. Early dominance, Zlatan runs wild and we take a 4-0 lead. The only difference is that the fifth goal was scored by Derby, which is irritating in a narrative sense, but really nothing to get too upset about. It’s also hard to be upset when David Villa, lovely lad that he is, actually gets on the scoresheet, bless him. 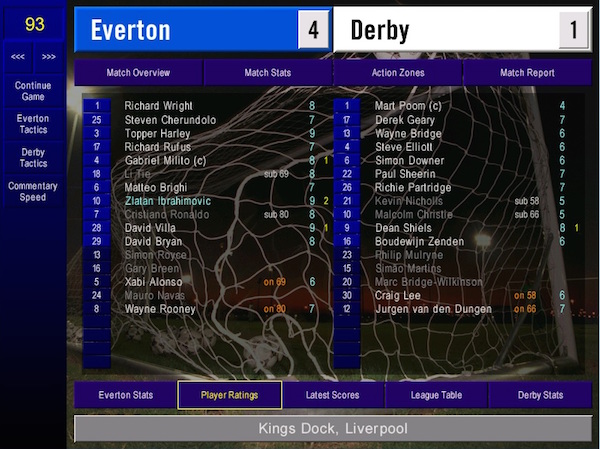 Cherno Samba is fit again but given that Zlatan has scored four times as many league goals in just a fraction of the time, I’m afraid that the young lad will be left to kick his heels on the sidelines for a bit. Especially as we’re approaching what is now our most important game of the season.

For all of our problems, we’re still in the FA Cup and we’ve got to get past Charlton at home if we want to get to the last eight. Charlton have never recovered from getting relegated in the first season of the game and now they languish in the lower reaches of the Championship. Annoyingly they play the sort of back three that I haven’t faced for years, but we should still win. I mean, it *is* Charlton. 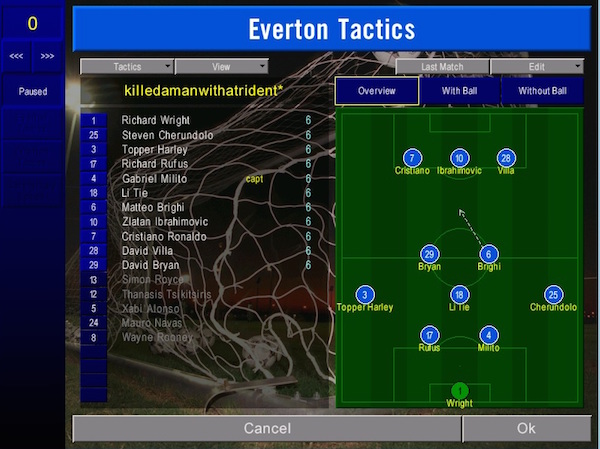 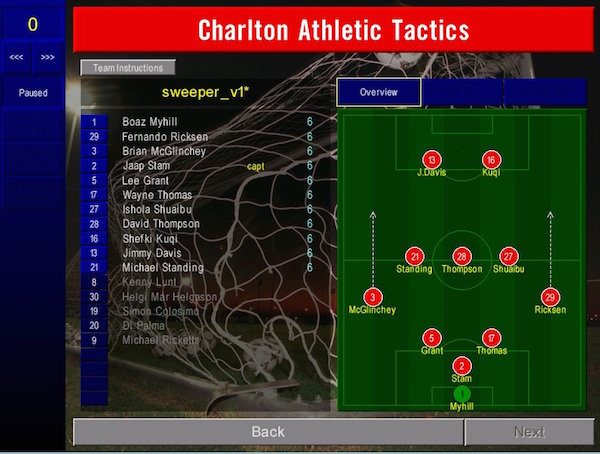 Just when you think that the game cannot surprise you anymore, it goes and blows your mind. This match bore all the hallmarks of a distinctly Evertony cup upset. We dominated and they were rubbish. We had shots and Boaz Myhill saved them all. We couldn’t score but they, thanks to a wonderful Kenny Lunt solo effort and a Michael Standing tap-in, could. One goal down with 30 minutes to go, it looked set in stone that we would be humiliated. Wayne Rooney came on for Villa and the chances continued to mount up, but that generally doesn’t mean anything. If destiny suggests that you’re going out, you’re going out. Except we weren’t going out. Not today anyway. Zlatan stepped up and scored again, his ninth goal in ten appearances, and we were saved. Quite why he didn’t play like this before, I’ll never know. 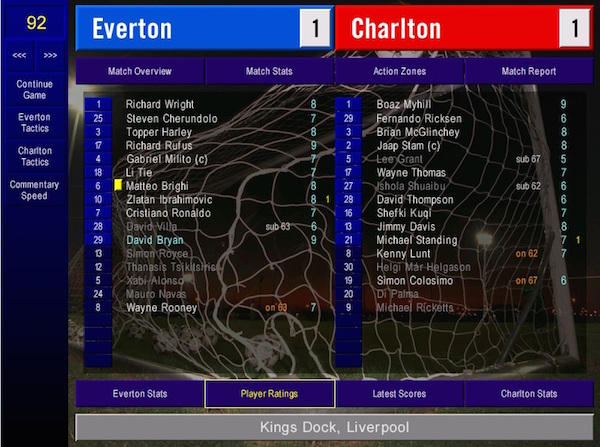 With Sheffield Wednesday away, we need just a few changes to freshen things up. After all, we don’t want to mess up the replay. The Greek lad can come back, and we’ll find room for Magallanes even though he’s just told me that he wants a fresh challenge. Rooney can have a game too and so can Alonso. David Pizarro still says that he has a problem with his manager though, so he can fuck off. But the biggest surprise, and I say this as the man who makes the decisions, is the reappearance of Ryan Williams at right wing back. Steven Cherundolo is injured and, while Danny Senda is entitled to be unhappy about this, Williams has been brilliant in this position for the reserves. He deserves his chance. I just hope that this rotation doesn’t unsettle the team. 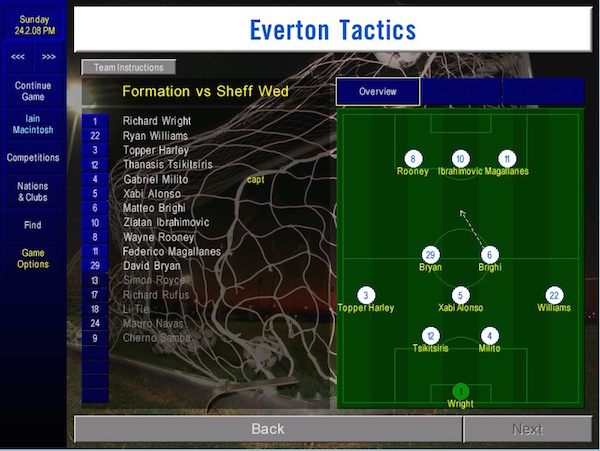 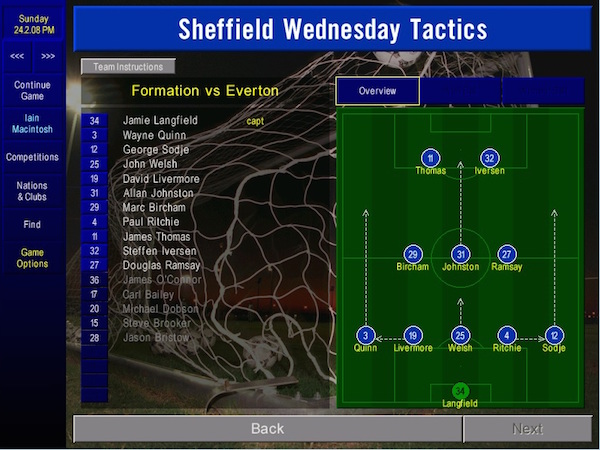 This was a little tighter than I would have liked, but it’s a win. And to get one of those when you’ve weakened the team away from home is always very gratifying. Granted, it would have looked better had we not been 1-2 down with ten minutes to go and had I not greeted David Bryan’s injury time winner with heaving great, snotty sobs of relief, but that’s the nature of the game at the highest level. That’s why we do what we do. 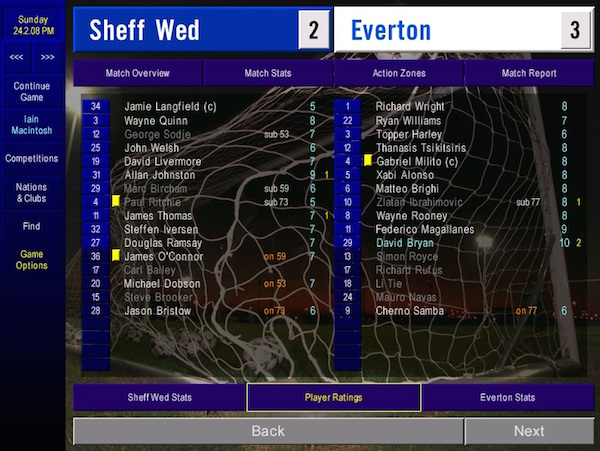 And so the month draws to a close with a game that we should never have been forced to play. We should have dealt with Charlton in the first match. Now we have to go to their place and do it there instead. this is a job for our strongest possible team. I cannot risk exiting this cup early, not with the board in the mood they’re in. We’ve lost just four of our last 27 games in all competitions but they still think we’re on a dreadful run. I really need some silverware to change their minds. 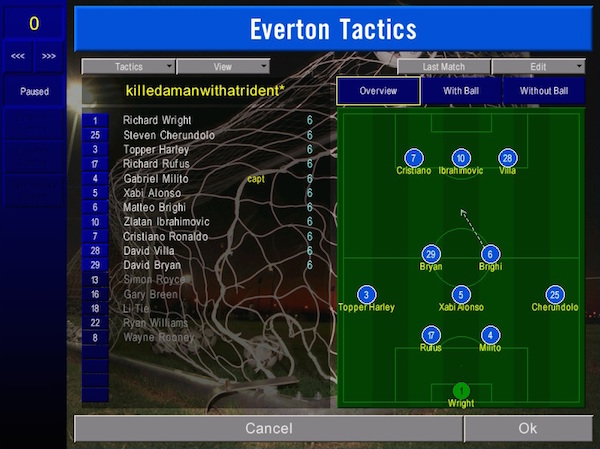 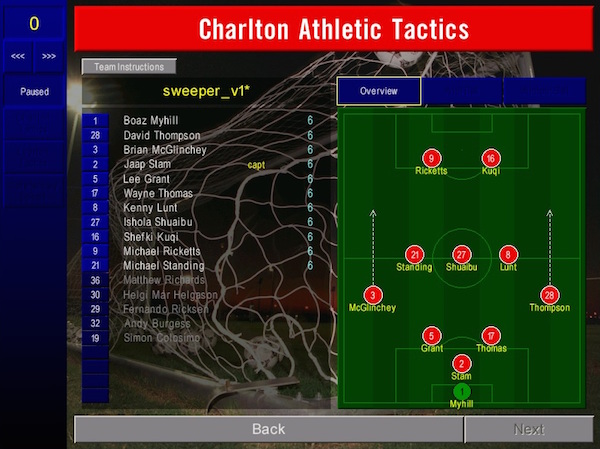 Sit. The. Fudge. Down. This could have been a tense night, but four goals in 24 minutes does tend to remove the doubt from a chap’s mind. Another hat-trick for Zlatan (13 now since he returned from exile) and one from Villa too (just nine all season.) That felt pretty special. Although Zlatan might wonder how he wasn’t man of the match. 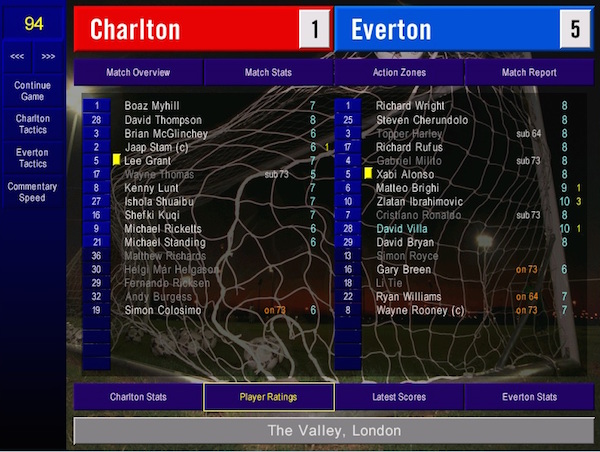 All of which means that our good form is very much an ongoing thing. We should be delighted with this. Sure, we’re out of Europe, we lost our league cup and we’ve got what might be diplomatically be referred to as a, “wildly unbalanced squad,” but with ten games to go, we are six points clear in fourth. Now, regardless of that sticky patch earlier in the season, that’s not bad place to be at this stage. We’re in the last eight of the FA Cup too, with a trip to Cardiff, currently Very Bottom of the Premier League. This is fine. This is better than fine. Surely, surely, surely, the board will be pleased with that? 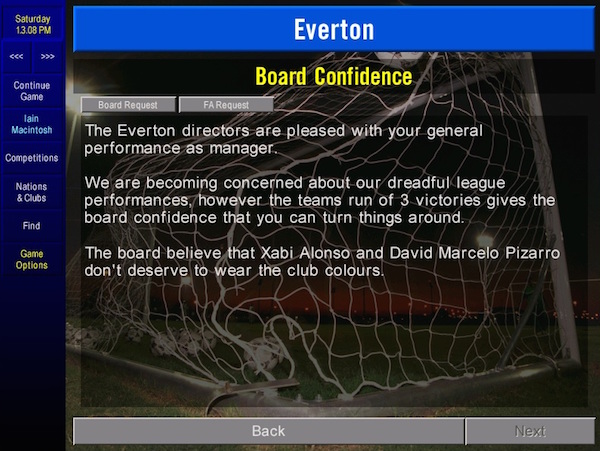 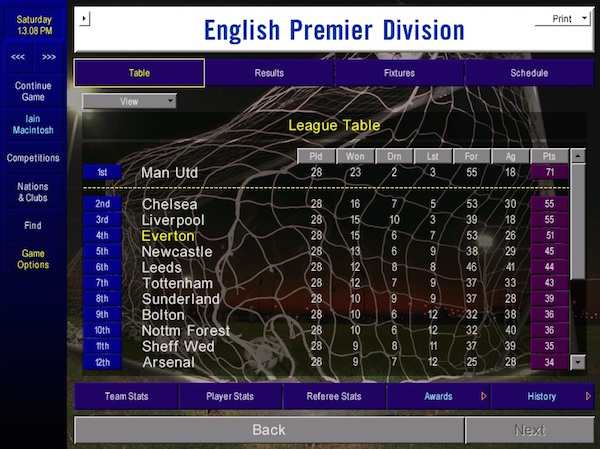 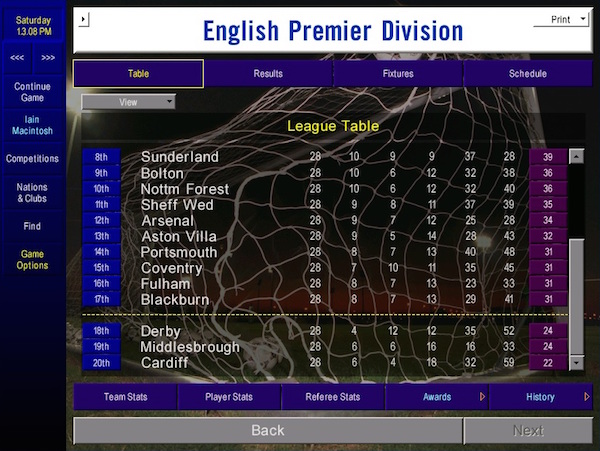