I honestly thought that back-to-back wins in the league and five consecutive clean sheets might be considered a good thing, but the reaction hasn’t been quite what I’d hoped. I know it takes time to turn around a supertanker, but I would have thought the signs of improvement would be obvious by now. Alas, no. But I console myself with the memory of the Goodison Park crowd, such as it was in those dark days, calling for Howard Kendall’s head in 1984. He turned it around and forged one of the greatest teams of the decade. I can do the same.

@iainmacintosh @thesetpieces This is even sadder than the final series of Noel's House Party.

@iainmacintosh @thesetpieces It's painful to read this now. I'd protest myself, if this wasn't entirely fictional.

But look! Tim has been in touch and Tim has a bold idea. I like bold ideas. Tim thinks that I should go with THREE strikers. As with last month’s advice, I’m not going to dive head first into it. But I am going to give it a run in the next few reserve games, just to see what happens. Because of our ‘awful’ facilities and my desire to spend every penny on the first team, I haven’t done much with the reserves for years. Now they’ll come in handy at least. And it will be good to catch up with Zlatan, Xabi and the boys.

Speaking of which, a few people need to leave. The board told me last week that they no longer felt Xabi Alonso and David Pizarro were fit to wear the shirt. That’s unfortunate as they could have been brilliant for me, but I do need to curry favour with the bosses right now, so they shall be sacrificed upon the altar of self-interest. With £7m coming in for Zlatan at the end of the month, I can buy the reinforcements I need so desperately. This, I’m afraid, will be a two part December ’07 blog. There are an eye-watering NINE fixtures this month and whizzing through is inadvisable at the best of times. These are not the best of times. If we’re going to do this properly, we’re going to need time and space.

But first we need to take care of Bastard Bolton. The ‘mad arse’ formation was designed specifically with them in mind, so there’s no point making dramatic changes right now. Cristiano Ronaldo comes in for Federico Magallanes, whose morale has dropped for some reason. Mauro Navas replaces the injured Danny Senda. Sadly, my first choice right wing-back, Steven Cherundolo, has lost faith in my ability. He’s not the only one. 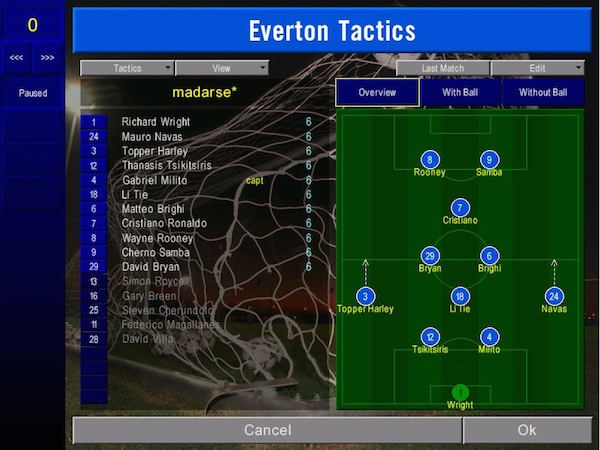 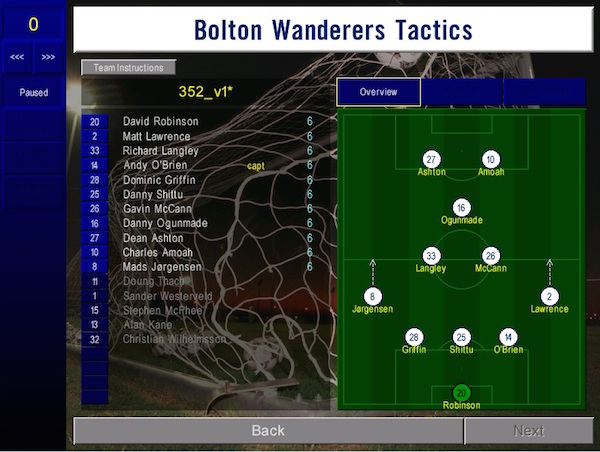 A hard fought win, and they’re the ones I love the best. Bolton gave us some serious issues in the first half, and Richard Wright is the only reason we have a sixth consecutive clean sheet to our name. Navas was torn apart on the right by Mads Jorgensen, winning one of just 11 attempted tackles. But when his instructions were toned down, he stabilised enough to last the majority of the game. Cherundolo put in a solid display from the bench, while presumably moaning about me to the other players. A free-kick from Matteo Brighi earned us the win, though if we’d put a few more of our shots on target, we’d might have won by more. But let’s not grumble. That’s three wins on the bounce and we’re up to ninth, still with two games in hand. 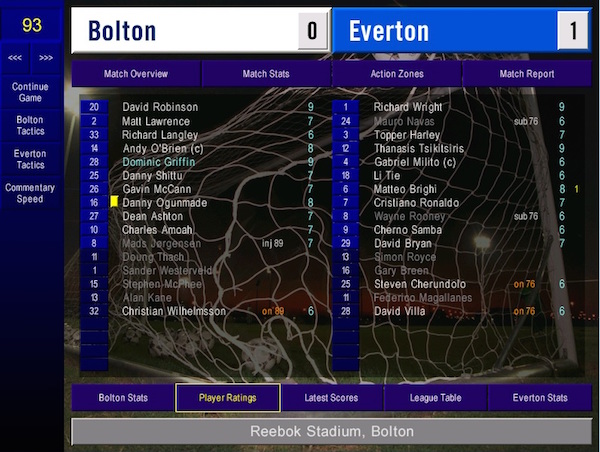 If we can beat Auxerre, we’re through to the last 16 of the UEFA Cup, and that’s not too shabby, is it? We’ll have to do it without the suspended Li Tie though. With Xabi Alonso out of favour, I have to shuffle Brighi back, restore Ivan de la Pena to the first team and promote young Jason Osbourne to the bench. I bought Osbourne last summer for £425,000 as emergency back-up, but he’s never left the reserves. He’ll be perfect for this high pressure, high stakes game. But there is some good news. The recent form seems to have cheered up the dressing room. All of the players who had lost faith in my ability have suddenly reassessed their position. As a result, Cherundolo will return to the starting line-up and we’ll say no more about it. 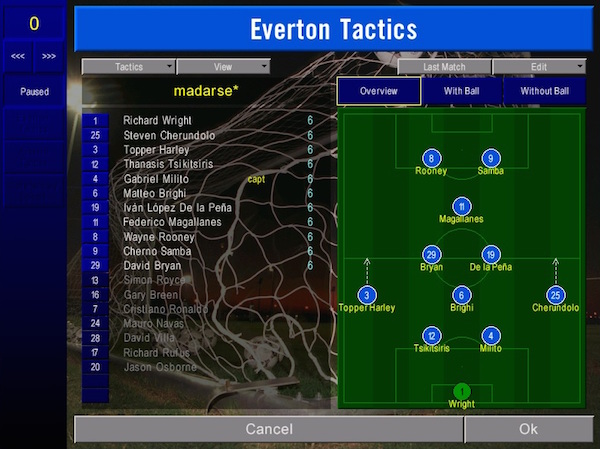 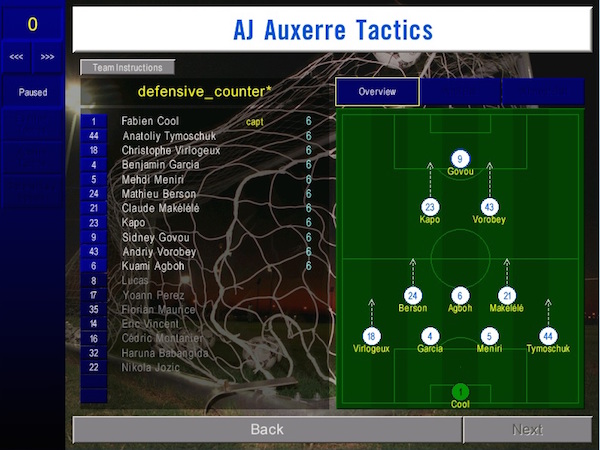 Urgh. A sucker punch right at the end and our European adventure is over. We started well, piling on the pressure, but without really making enough good chances. Fabien Cool, obviously, was more than equal to whatever we could get on target. Same old Everton, same old problems, sadly. A red card for the Greek lad wasn’t exactly a helpful contribution to the final stages of the game, but given that we’d conceded the away goal, it didn’t really matter much. My only hope is that the result doesn’t damage the recovery we’ve carefully cultivated. 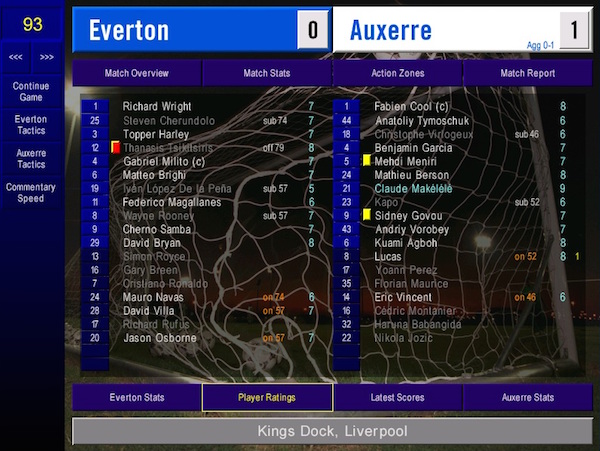 We have a reserve game scheduled, so there’s a chance to test out Tim’s wonder formation. I pick the strongest side I possibly can, say hello to some old friends and then send them out to prove me wrong. 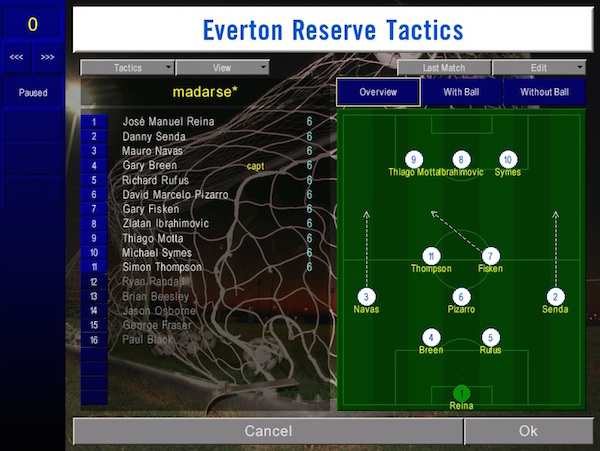 Very few of them prove me wrong. It’s nice to see Zlatan score for once, albeit in the last minute when the game was already lost, but there is no compelling argument here for another tactical change. That said, this is a team of sad faces and transfer listed failures. It’s not an ideal test. I’ll give it another go in the next reserve game. Ten shots is a decent return in an away game against a back three. 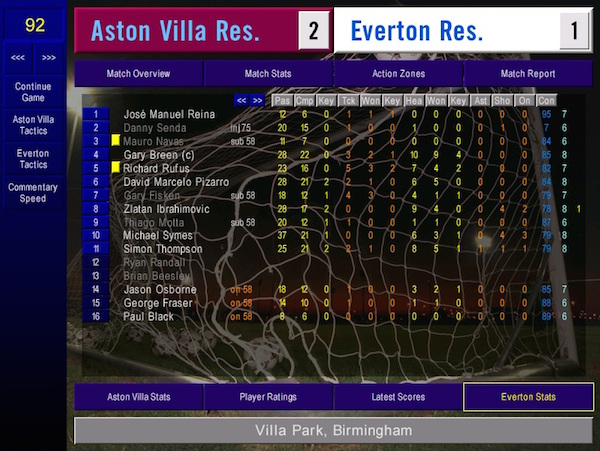 Back to the first team then and a slight shuffle ahead of Aston Villa’s senior side. Topper Harley is knackered, so he’ll step down and let Mauro Navas have a go. Ivan de la Pena was so poor against Auxerre that I’ve transfer listed him and put him in the reserves. Jason Osbourne can sit on the bench. I’m going to keep faith with Rooney and Samba for a little longer, but to be honest, they are doing my tits in. I cannot understand why neither of them are scoring. David Villa, fresh and rested, awaits his chance. 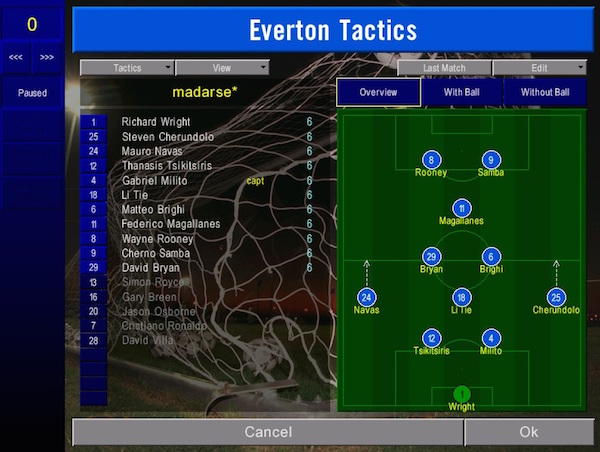 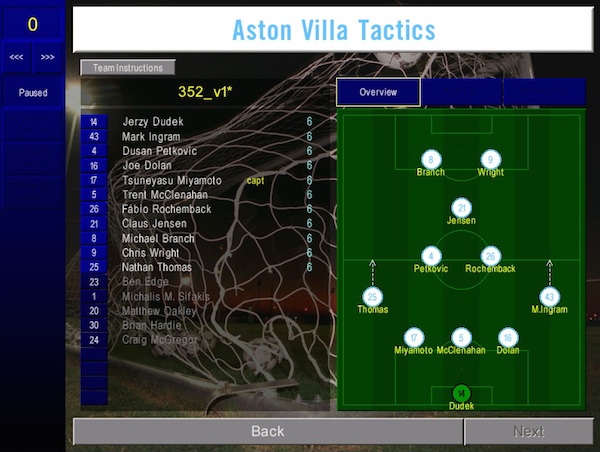 A lovely result and a lovely performance. For once, the opposing goalkeeper didn’t perform miracles. Poor Jerzy Dudek. He had to pick the ball out of the net three times because while the strikers can’t score, at least Magallanes still can. His hat-trick made short work of Aston Villa and gave me the chance to make lots of substitutions ahead of our League Cup quarter-final. As we’ve just been drawn against Manchester United in the FA Cup third round, I think it’s probably for the best if we treat the League Cup as our number one priority now. 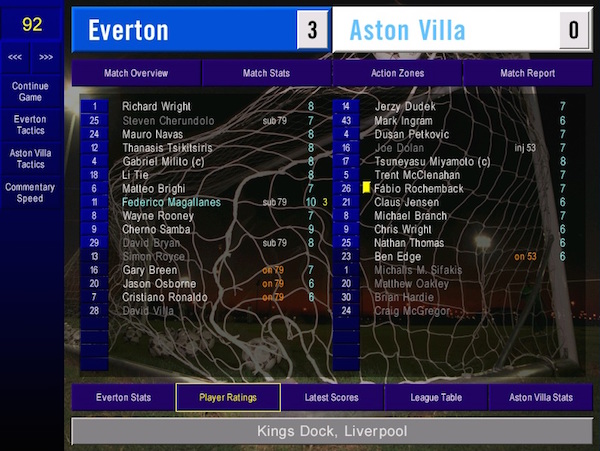 In the meantime, I have completed a Bosman signing for next season in the form of Simon Rusk. He’s been consistently excellent for Gillingham and, while it’s a little odd to be a defensive midfielder with world class crossing abilities, it’s more his all round game that interests me. He should be a decent squad player on the off chance that we ever end up back in European football. 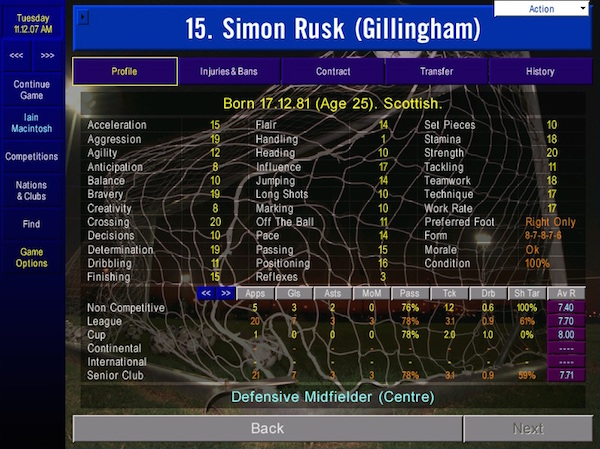 Just two changes for the League Cup tie away at Nottingham Forest. Topper Harley is refreshed after his break, so he returns and Wayne Rooney can go and think about what he hasn’t done on the bench while David Villa attempts to give a passable impression of what you might expect from a top class striker. I don’t have high hopes, not least because they have Edwin van der Sar in goal and he’s really quite good. 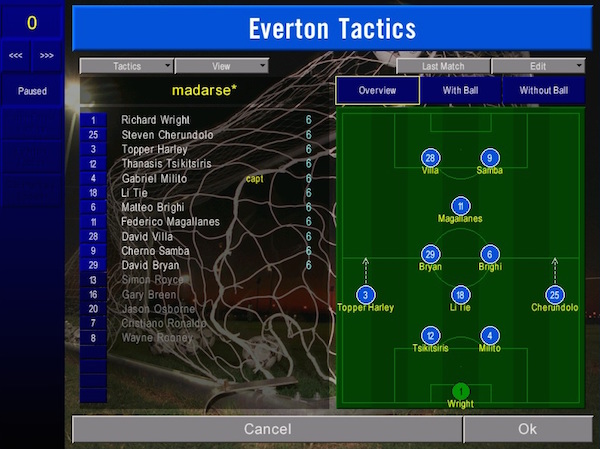 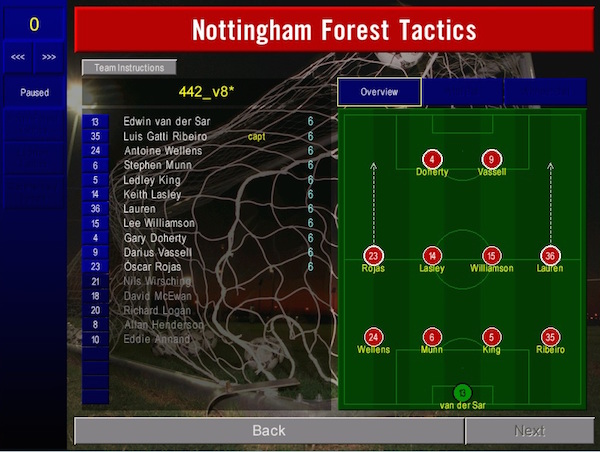 It seems that Everton are contractually obliged to demonstrate their unique Evertonness every single month and it’s really cost us here. World class performance from opposition goalkeeper? Check. Flurry of chances wasted by our incompetent strikers? Check. They scored with their only two shots of the night? Check. You’ve just lost the only trophy you’ve ever won? Check. You can’t drink enough to take the pain away, but that doesn’t stop you trying because the sleep that you need just won’t come and your heart has been beating pretty irregularly recently and you really want to get that checked out, but you don’t think you could take any more bad news and what you really need to do is just to talk to someone, just to open up, but everyone hates you and the last time you went out for dinner, a fat man with a red face tipped his pint over your lap and told you to fuck off and you can’t really deal with this sort of thing anymore? Check. 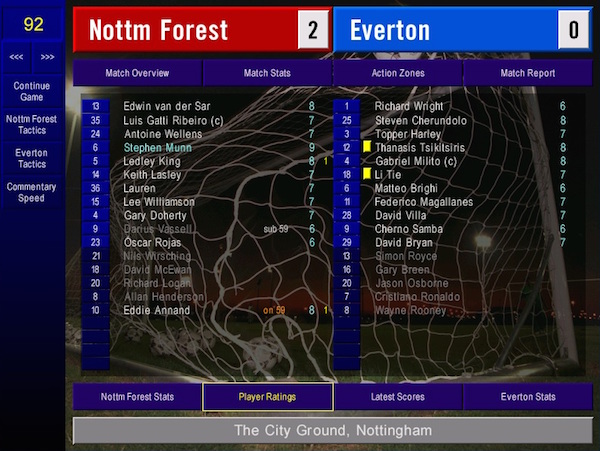 In the morning, I feel a little better. Not least because the reserves have had themselves quite a result with Tim’s formation. Now it’s worth pointing out once again that nearly every player in this team is on the transfer list or hasn’t been played in the first team since Belinda Carlisle was topping the charts. In fact, the two wingbacks, a fairly critical department in a formation like this, are both ‘greys’, the spare players that the game creates to make up the numbers. And Everton’s stiffs hit five goals. Something to ponder. 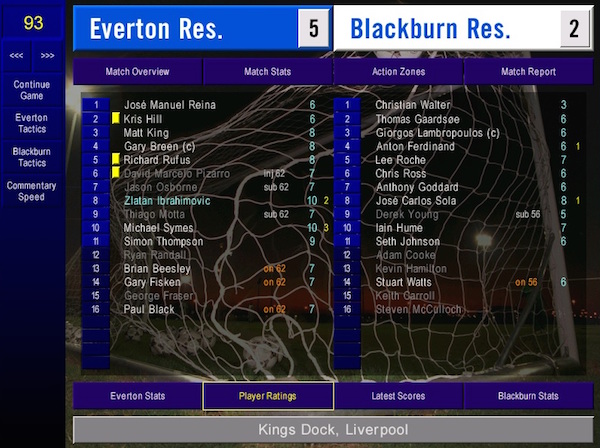 So let’s see, for shits and giggles, how that formation does in a Premier League game, shall we? After all, it can’t be any worse than what we just served up in the League Cup. But first some housekeeping. De La Pena has gone. He will not be missed. 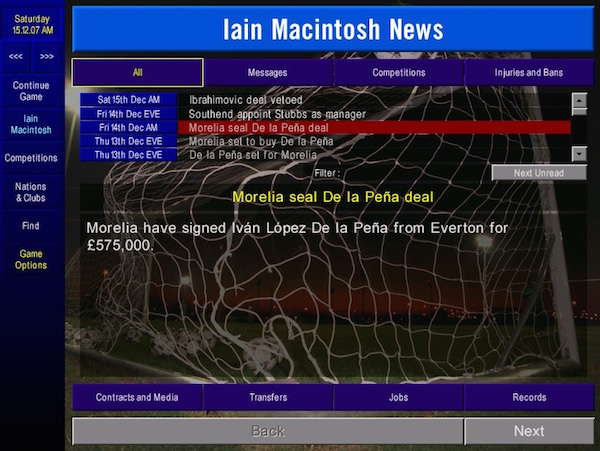 But there’s been a development in France. It seems that Lyon have messed up their paperwork and the deal to sign Zlatan has collapsed. He was never a free transfer though, so I suspect this is some kind of bug. 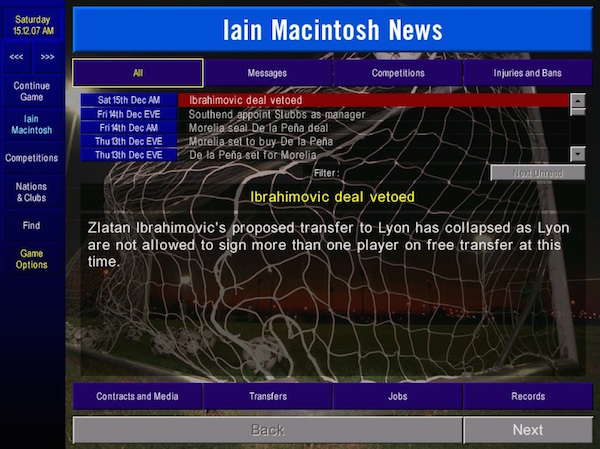 Now, a similar thing happened last season when I mistakenly believed that Magallanes’ best days were behind him. That turned out pretty well. Let’s see if the same thing happens again. It’s a million to one shot, kid. But that’s all we’ve got right now. Actually, it’s not, we’ve won four consecutive league games, but this is quite exciting and my judgement is so far off centre now that it’s a wonder I’ve still got my pants on. 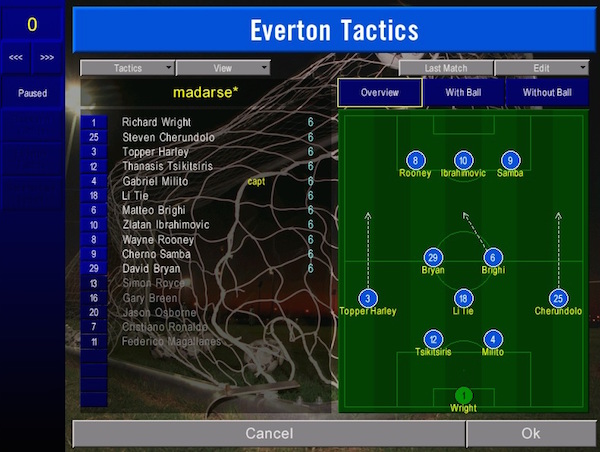 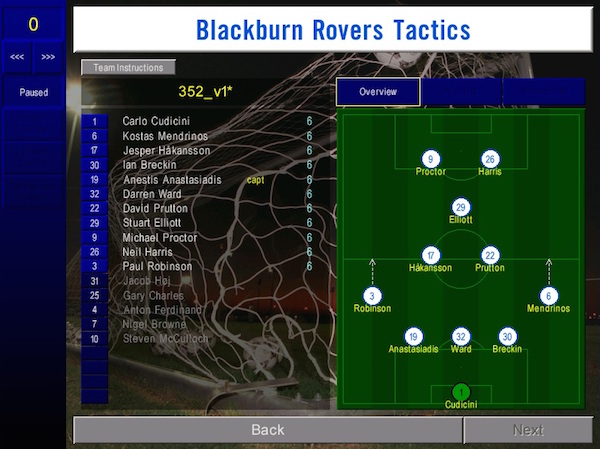 Interesting. Very interesting. The shift to three up front certainly eradicated our ability to keep the opposition’s shot count down, but given that they generally score with everything they hit, maybe that’s not such a loss. Away from home, we rattled up 12 shots, but with only five on target. Zlatan didn’t hit the target once. But we won. Our fifth consecutive league win and our sixth league game without conceding a goal. 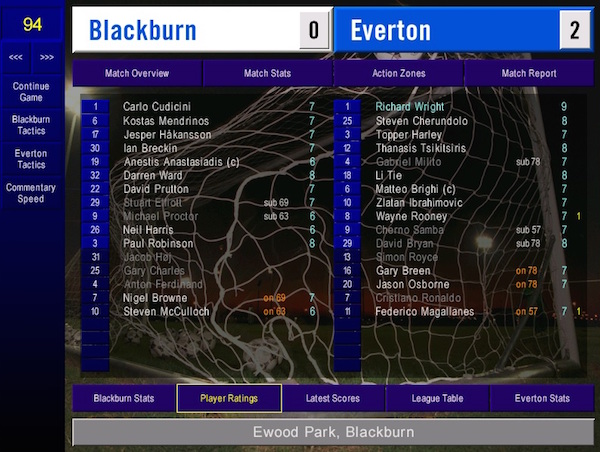 It’s something to think about, isn’t it? Can you recover from the limitations of a compromised ‘mad arse’ formation by somehow becoming ever madder? We’ll find out next week. And it might be nice if the board calmed down a bit… 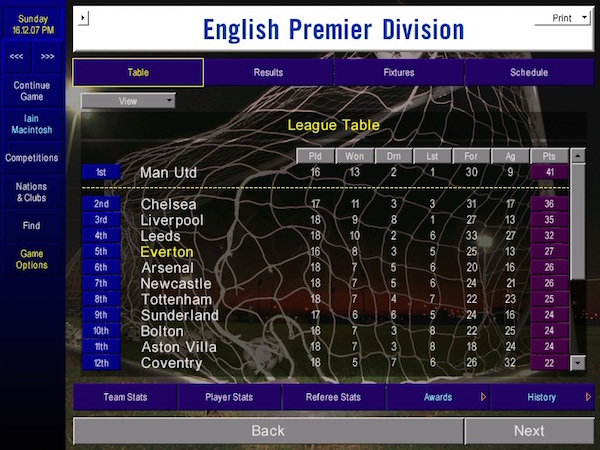 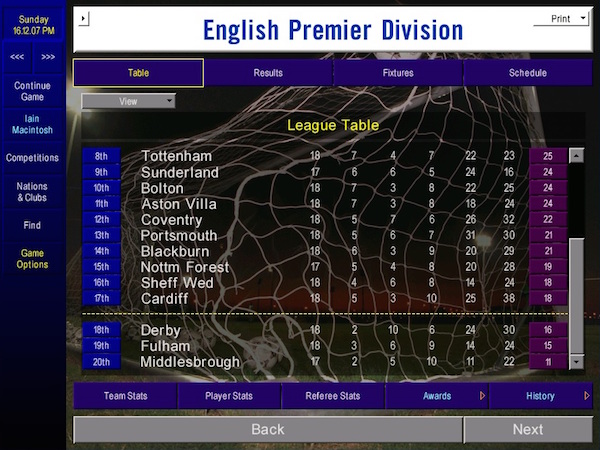 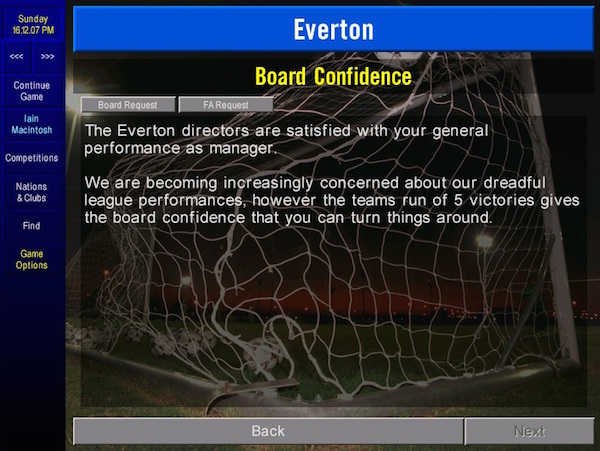