Three new signings (four if you count the Bosman capture of homesick Pepe Reina) and the mood of the fans at the Kings Docks is suddenly buoyant. Every new name meets with approval. Of course, I’m old enough to remember the days when we all got excited about Carlos Dure, God rest his soul.

@thesetpieces @iainmacintosh Can't wait to wear this season's shirt down the Dock. Going to be a good year I think. pic.twitter.com/LdPomF2oVu

@iainmacintosh Creativity 20, Passing 20, Tackling 8…. I don't think I like this new breed of English footballer.

@iainmacintosh Pizarro is amazing, excellent signing Macca. Make sure you play him enough for the work permit not to be an issue.

But there’s no easy start for the new arrivals this season. We open the campaign at Wembley, thrust into battle against the best team in England, nay, the best team in the CM01/02 universe.

After 19 years of success under Sir Alex Ferguson, John Toshack was an odd choice of replacement by Martin Edwards, but goodness me, it’s a gamble that’s paid off. Two league titles in two seasons, two Champions League finals and one victory. And he’s done it all with a back three and without spending more than £10m on a single player.

They don’t have weak spots, this lot. You just have to be as strong as possible in every department and then hope you get a bit of luck. We’ll be playing in pretty much the same system as last year, the time honoured ‘mad arse’ formation, but with a few tactical tweaks. With so much pace up front and such exceptional passing attributes in the middle, we’ll be asking all midfielders to play through balls wherever possible. Perhaps that will make the difference for our forwards. Naturally, Federico Magallanes will continue to exercise the freedom to fire at will. He’s earned that right.

You may notice a few little tweaks to the saga this season, the most noticeable of which will be the inclusion of opposition line-ups. The game is rolling into uncharted territory now and this should help keep up with developments elsewhere. 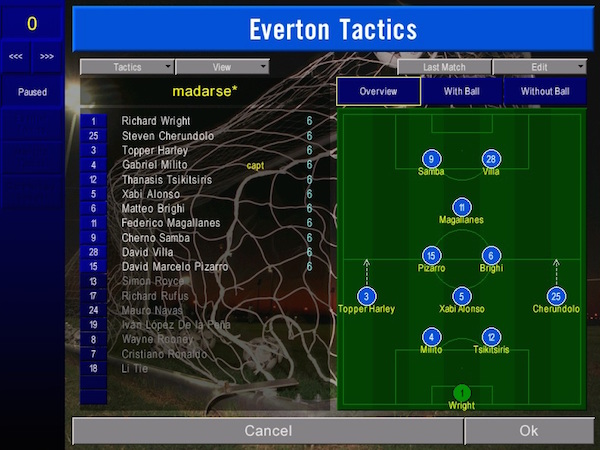 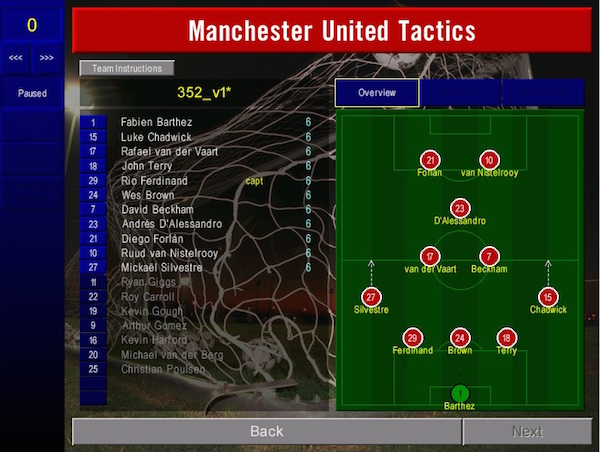 What began as an encouraging test of our mettle ended with not just one, but two significant setbacks. An injury to Topper Harley and a suspension for our captain Gabriel Milito. Fortunately, Harley’s injury is minor, but Milito’s act of two-footed malice towards David Beckham in injury time was utterly pointless and will see him miss the first three games. Not only that, but it means that if he gets sent off again, he’ll be in for an even longer punishment. I love that man, but he can be such a tit sometimes.

As for the game itself, I was relatively pleased with our efforts. Diego Forlan scored with United’s first chance, but Magallanes, assisted by Cherno Samba, equalised soon after. They kept us at bay with a degree of comfort, thanks largely to the efforts of former Bayern Munich man John Terry, and on the off chance that we got through their defence, Fabian Barthez was more than equal to the task.

We might have nicked it, but Toshack’s inspired swap of Rafael van der Vaart for Christian Poulsen solidified their midfield and shut down the few avenues we’d opened. Terry headed home a corner shortly after his introduction and even the arrival of Wayne Rooney and Cristiano Ronaldo made little difference. But we were not outclassed and so I am not too concerned. 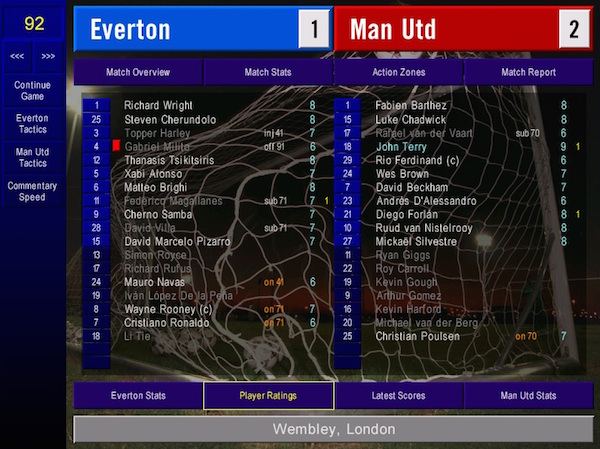 Besides which, it’s the Charity Shield, and it means very little. I’d take defeat at Wembley in exchange for a good start in the league. An opening game at home to Middlesbrough is the sort of first day at work I think I can live with too.

Boro spent four seasons in the Premier League, fannying around in the middle of the table before suddenly collapsing to a surprise relegation in 2005. Steve McClaren was replaced by David Jones and he worked quickly, winning the Championship in his first season and then fannying around in the middle of the table. They play a diamond 4-4-2, which can be very effective in this game, so they’re not to be taken lightly. But I think that we should be okay as long as we don’t do anything really stupid. 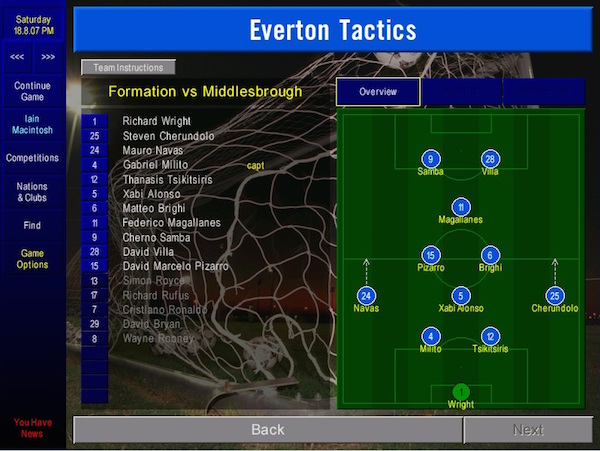 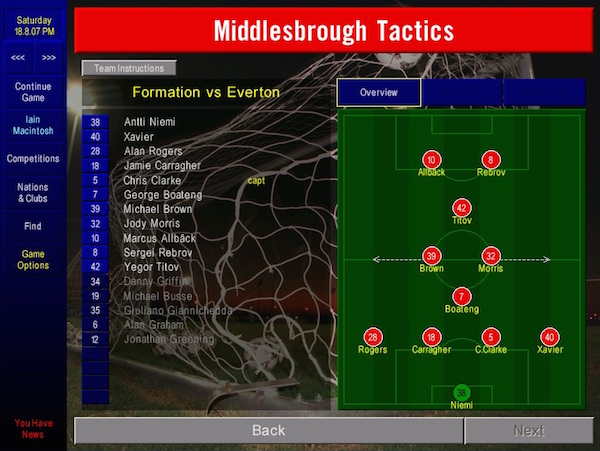 Well, that was really stupid. We had that game in the bag before half time and it really, really should have been four or five nil. Antti Niemi made sure that didn’t happen, but we were always comfortable, even when Marcus Allback scored a late one with what was Boro’s second shot of the day. But even that was okay. We would have held out.

What wasn’t okay was Magallanes getting himself sent off in injury time for shoving Michael Brown over. He’d had such a good game up until that moment, scoring twice and threatening plenty more throughout. While David Villa, who left early with a short term injury, couldn’t get a single shot off, and Samba only managed two, Magallanes had five on his own. We’ll miss that when he becomes our second key player to earn himself an entirely pointless suspension. The absolute dick. 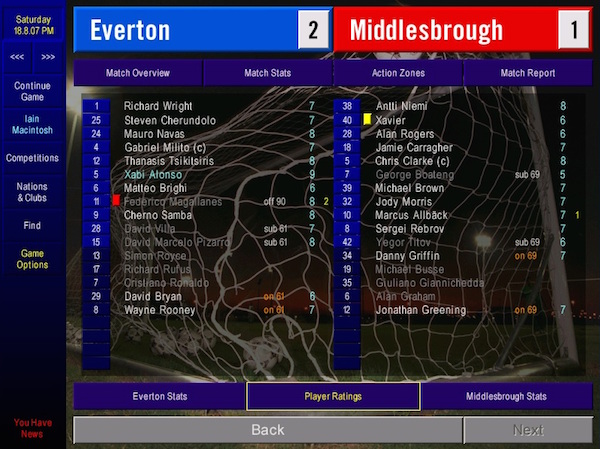 It’s a good job we won. Manchester United’s involvement in the European Super Cup and Chelsea’s Champions League preliminary round means that we haven’t got another match this month. So while everyone else canters off through their first three games, Everton will remain stuck on one. You can get into a lot of trouble in a very short space of time if you match a bad start with a fixture list like that. We’ll have to wait until September 8 for our next match; the visit of Leeds United to the Kings Dock. And, of course, Leeds have started like a train. A good train too, one of those double-decker French ones.

That will give us plenty of time to consider our European challenge. The Champions League draw is complete and we’ve ended up with Real Madrid, Benfica and Bordeaux. That would be bad enough in modern day Champions League football, but these are the dark days when the unharnessed greed of the big clubs gave us two group stages, the first of which was supposed to be a revenue generating rollover for the bloated elite. This will be rather more of a challenge than I initially expected. 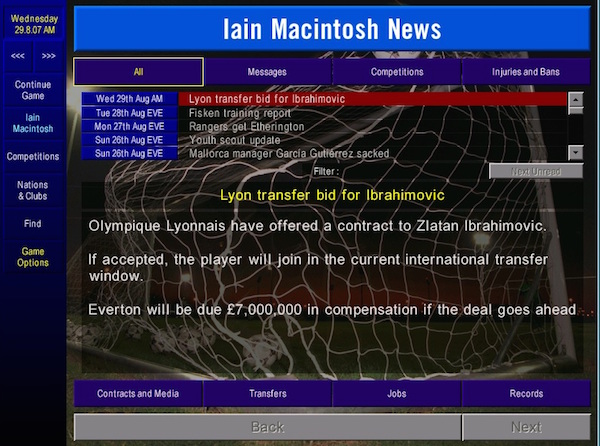 But at least there’s some good news. We may finally have found someone to take Zlatan off our hands. The weird ‘unprotected contract’ rule means that we can’t haggle on the price, but £7m for someone who has never quite clicked for us sounds fine to me. He arrived as a King, he left as one of those minor Barons who only ever appear on the later pages of Hello Magazine when the desk suddenly realises that they haven’t done enough puff pieces that week and that they need to fill space with oversized pictures of weak-chinned aristocrats drinking their way through that crushing sense of meaninglessness brought on by repeated invitations to the opening nights of ill-conceived London boutiques, the sort who grin for the cameras as their eyes flicker across the room in search of someone better because the hunt for verification never stops, even though, deep down, they know that the verification that they need doesn’t exist and that perhaps it never did and that there’s no-one in this hotel who will hold them when the terrors come.

You know the sort. 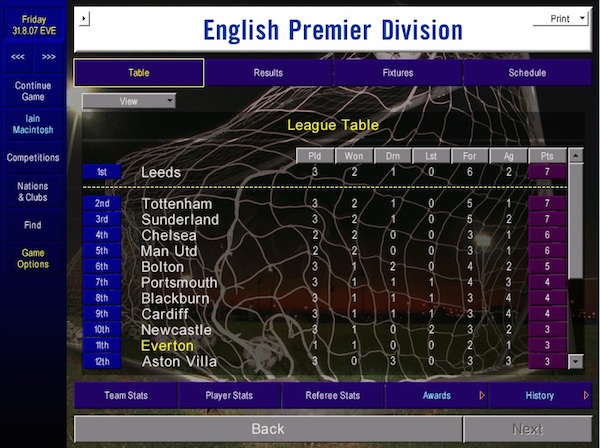 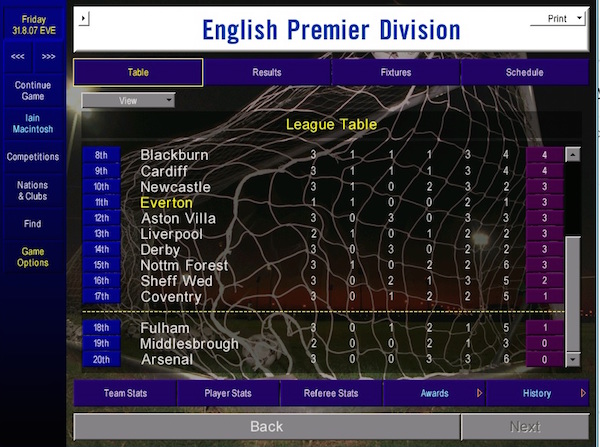