There’s something about Merseyside as a new football season approaches. Something supernatural. The very pavements themselves seem to crackle with electricity as this extraordinary city charges itself with hope, excitement and optimism. Sometimes I feel that the faith of these magnificent people is like a drug and I want to stuff as much of it up my nose as I can.

But while the fans can get as excited as they like, it’s important to keep a cool head and make sure that the reinforcements we need are in place in time for the Charity Shield clash with John Toshack’s Manchester United.

For the first time in this adventure the answer to the question, “What do we need?” is not, “An entirely new team.” We really only need three players. One hotshot striker to provide competition for Wayne Rooney and Cherno Samba, and two midfielders to upgrade on Gary Fisken and the all-of-a-sudden-he-thinks-he’s-a-centre-forward Thiago Motta. Speaking of which, Mike has been in touch and he makes a very good point.

@thesetpieces @iainmacintosh I think it's worth seeing if anyone will nibble at Motta for £10m. He's 24 now, and not actually THAT good…

We’ll give Motta a bit of a chance up front, but I don’t have high hopes. And, as much as I wish we could get £10m for him, I think we’ll be lucky to get £5m. Zlatan’s been on the list for the better part of six months and I can’t even get £7m for him. The only club that are expressing any kind of interest are Millwall and they really need to shit or get off the pot.

And so we launch into our pre-season friendlies, the first three of which are presented here in a no-frills manner because pre-season friendlies mean absolutely nothing in this game or in actual real life. It’s just a case of getting players fit. Or, in some cases, sober. 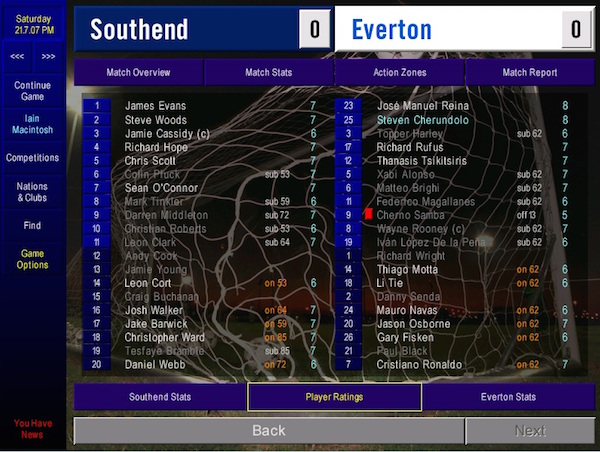 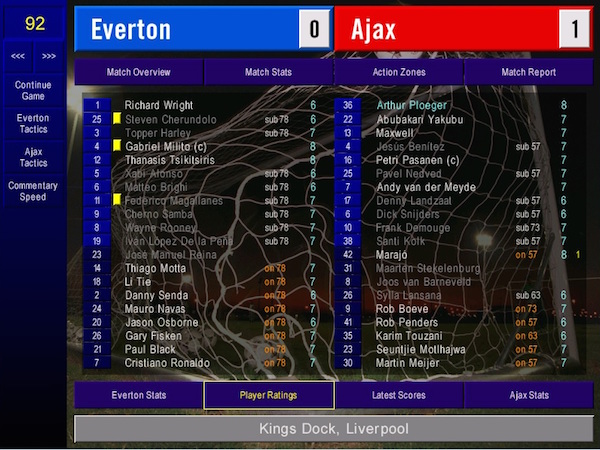 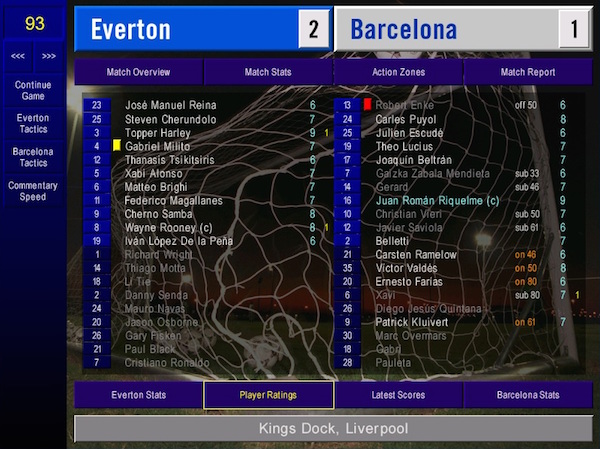 For all that stuff about friendlies being meaningless though, who else but Everton could struggle against Southend United and then beat Barcelona? So many people describe Everton as a very “special” football club, but how often have we stopped to ask ourselves whether or not those speech marks are sarcastic?

As always, our transfer intentions are inhibited by our relative lack of resources. Despite the new stadium, despite the improved performances and despite the League Cup glory, we’ve only really got £12m or so to spend this summer. Liverpool once spunked nearly three times that much on one centre-back. With that in mind, after his flat performances and in accordance with Mike’s wishes, Motta goes on the list. We need fresh blood. 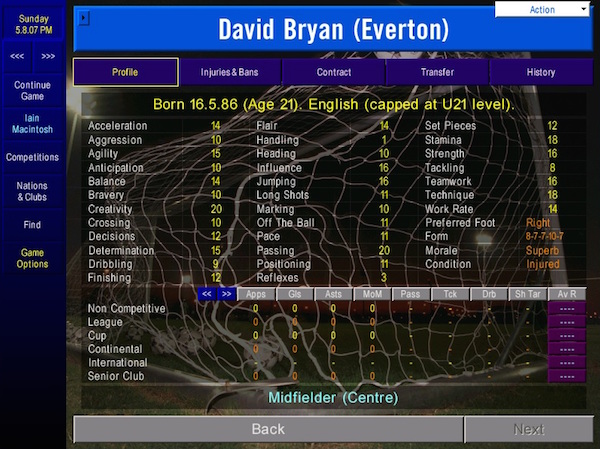 The first of our new arrivals eats up nearly all of the budget. I knew all about David Bryan when the game began. He’s a 15 year old Southend United player with high passing attributes who I would have signed in the first week if, you know, I’d had any money. I wanted him back in 2005, but didn’t have the money to outbid Hull City when they dropped £725,000 on him. But now I’ve got £9.25m that says he’ll be an England regular within three seasons. He made 13 goals for Hull last year and with a passing of 20 and a creativity of 20, I expect the same for Everton. 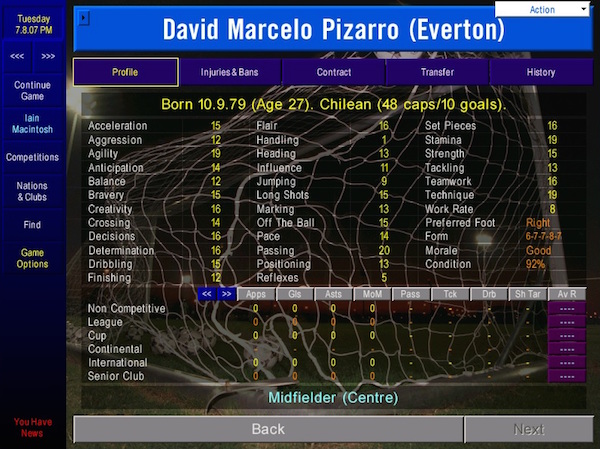 Next up, the bargain of the summer. David Pizarro. I have no idea what Udinese have been playing out with this boy. He’s barely been in the team, he hasn’t been looked after and they’ve left him out on the back step with a £700,000 price tag round his ear. Like Bryan, he’s a creator. And like Bryan, I have high hopes. We now have three excellent midfielders. And that’s not counting Ivan de la Pena. Or Fisken, obviously. 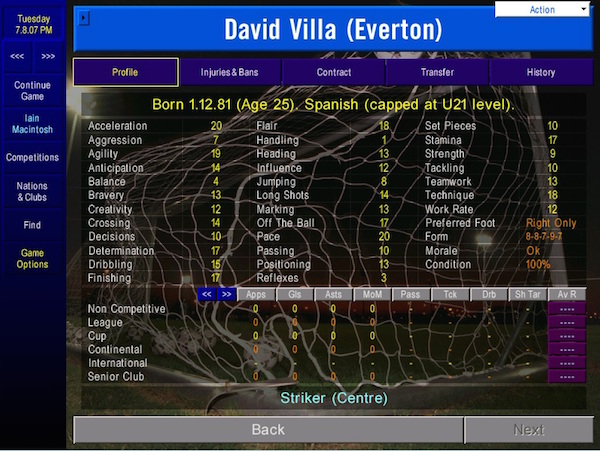 With the remaining cash, I rescue David Villa from Anderlecht for £2.7m. Mallorca paid £9m for him in 2002 and he was their player of the year in 2004 with 19 goals and an average rating of 7.97. I have no idea what happened the following season, but he ended up in the B team and was eventually flogged off to the Belgians for £4.4m. He scored a goal every other game there, but was kept out of the side by a pair of prodigious Greek strikers, both of whom I pursued only to be put off by £20m price tags. But there’s no way those lads are worth ten times as much as Villa. He’s 25, he’s full of pace and flair. 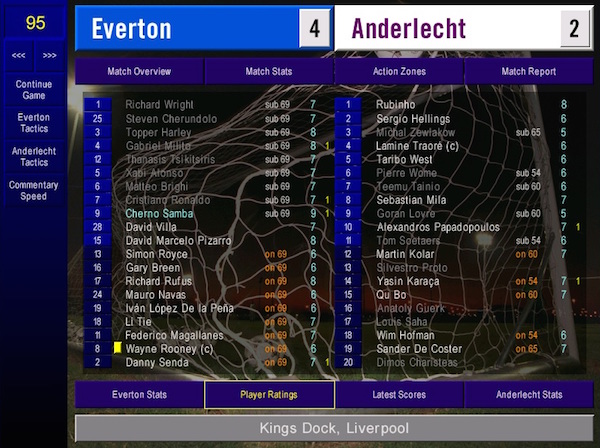 Bryan has a bit of a knock, but Villa and Pizarro do just fine against, funnily enough, Anderlecht in our final friendly. Indeed, the whole side feels more balanced than at any time under my stewardship. I don’t think we can sit and say that another title challenge is on, as the other teams have so much more money than us, but I certainly think that we can hold our own as we fight on so many fronts. There’s a team here, I think. 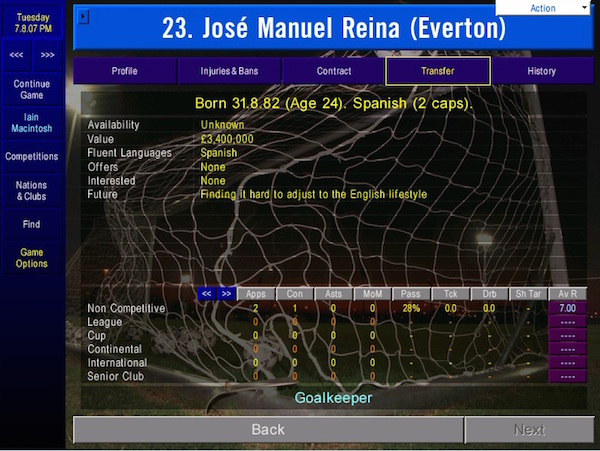 As we head down to Wembley for our first ever Charity Shield, there is only one problem. Pepe Reina, my Bosman signing goalkeeper, is struggling to settle on Merseyside. That’s an unexpected development. With his morale at rock bottom, I don’t really have any option but to send him on leave for two weeks to see if he’ll cheer up a bit. Hopefully, the arrival of fellow Spaniard Villa will help ease his integration. But for now, we’re going with Richard Wright once again. And just for a moment, I feel a bit nauseous.