@iainmacintosh Absolute shambles. Can't blame Xabi for wanting to get off that sinking ship. #MacintoshOUT

@thesetpieces @iainmacintosh See, for all you talk about not doing a Brendan he wasn't gubbed 6-0.

@thesetpieces @iainmacintosh Christ, Iain, the coefficient. It's not just about you any more.

It’s been a brutal month. In three Champions League games, we’ve conceded ten and responded with precisely none of our own. Pepe Reina and Xabi Alonso are both homesick, Alonso to the extent that he’s run away to Spain and, like the spineless fraction of a man that he is, he’s asked his agent to tell me that he’s not coming back.

There is a temptation after a difficult period to slap the reset button. You want rip it all up, to tear it all down, to tip a can of petrol over the whole lot, light a match and laugh maniacally as the flames singe your eyebrows. But that rarely achieves anything. And I should know.

First of all, let’s have some perspective. It’s not that bad. We thrashed Leeds and Newcastle, we’re unbeaten in the league and it’s only the postponement of two of our opening fixtures and two unfortunate draws that’s keeping us off the top of the Premier League table. If Everton, at any stage of the season after the first three or four games, can be in sight of first place, it simply cannot be classed as a disaster.

And we know that this formation works. It worked last season and we’ve got better players now. What would our critics have us do? Return to using wingers even though we don’t have any? Play a back three even though we know it didn’t work for us when we flogged it like a dead horse a few years back? The most we can do is make minor adjustments here and there because, remember, we still don’t have that much money. We generally pick up about £15m from season ticket sales and TV money and that’s it. We can’t just run out to the shops and come back with three world class players.

But in another seven game month, it’s clear that improvement is required if we’re to stabilise. It’s very easy for a wobbly start to turn into a gut-wrenching slump. And again, I should know. We open October at Highbury where Jim Jefferies has struggled to fill Arsene Wenger’s shoes, losing his first three league games before gently improving with four unbeaten games. He can still call on Thierry Henry though, who has refused to jump ship in spite of the Gunners’ continuing incompetence. I’ve made a few changes for this. Cherno Samba’s nine games without a goal mean that he’ll be on the bench. Wayne Rooney and Cristiano Ronaldo will start up front. Matteo Brighi will drop back to the base of midfield, allowing the impressive David Bryan to start. 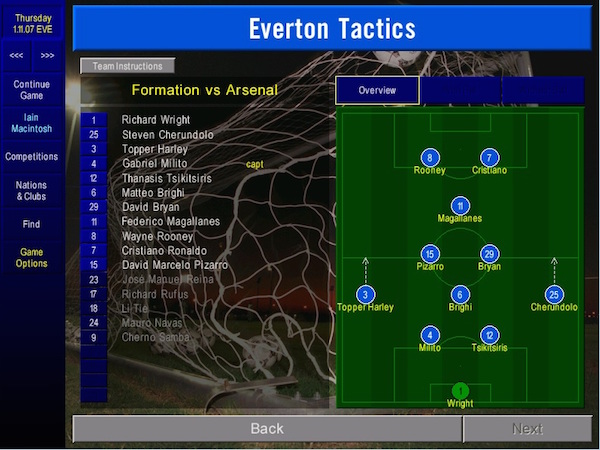 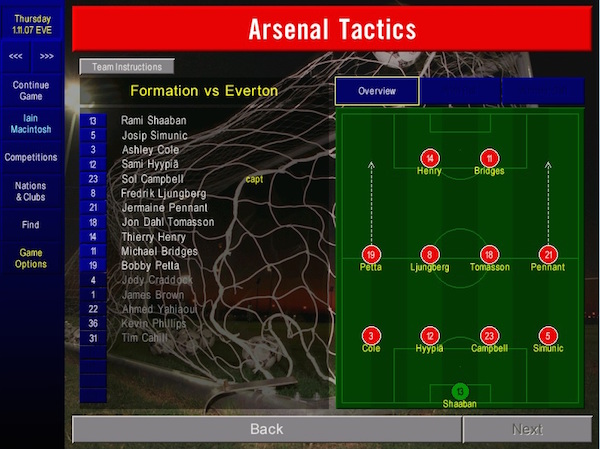 Okay, so we lost. But we lost well. We lost making chances. I am proud of my players. Admittedly, Federico Magallanes had NINE chances to himself, put only three on target and failed to score once, but I can take that. That’s okay. We passed the ball well, we were constantly on the front foot and that’s the way I like Everton to play beca- sweet Jesus, I’ve gone full Martinez. 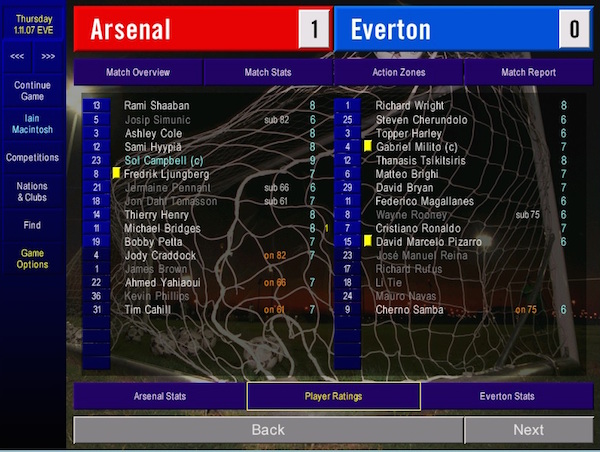 Right, there’s no messing about here. It’s Sheffield Wednesday at home and they’ve only won a single game all season. They’re playing in some kind of deranged, asymmetrical melee of a formation. For my part, I will keep the same team in the same shape and, by thunder, we will rip through them like an act of God and finally bring an end to this horribly anxious start to the season. 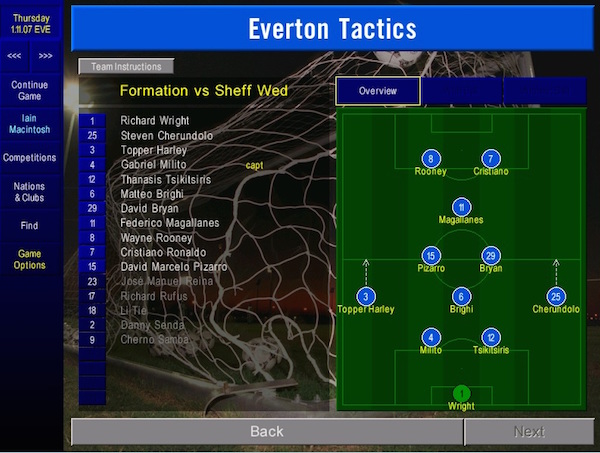 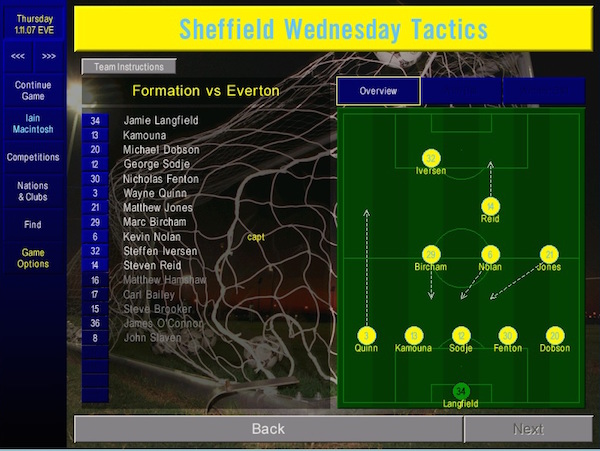 It’s time to slap the reset button. It’s time to rip it all up, to tear it all down, to tip a can of petrol over the whole lot, light a match and laugh maniacally as the flames singe my eyebrows. This is happening every single game now. We’re all over them, we’re banging in chances every five minutes, we’re denied by a suddenly world class goalkeeper, and then we let the whole game slip away at the other end. 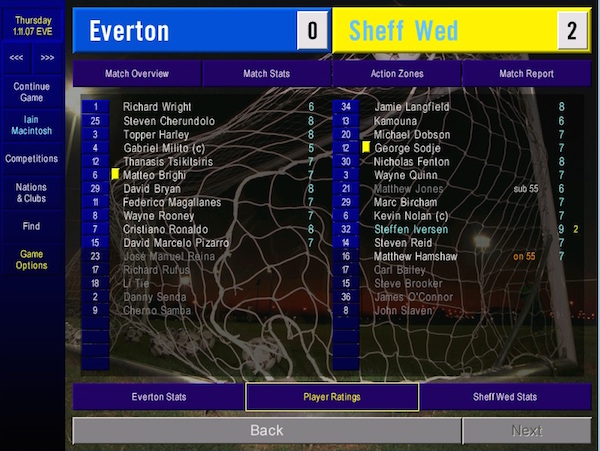 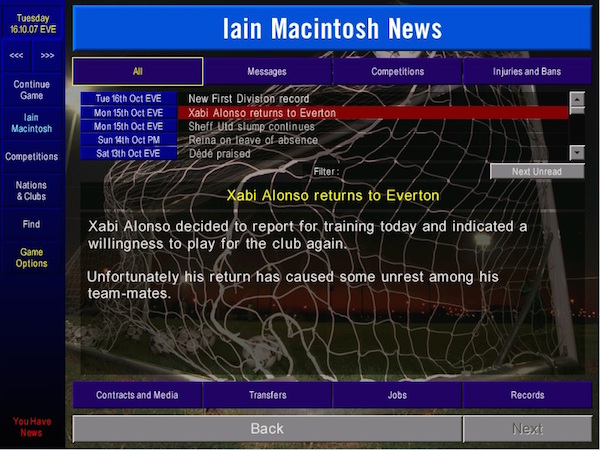 Xabi Alonso has decided to return, tail firmly between his liar’s legs. I’ve taken him off the transfer list, but he’ll have to earn his place back in the team. I’ve got bigger problems than him. I need to turn this side around.

When it comes to a reboot, I believe that you should start with a simple template and then alter where required. With that in mind, we go back to a simple 4-4-2 with all the preset individual instructions. After several years without wingers, there’s not much depth here, but I can use Danny Senda and Topper Harley on the flanks and hope to gain some advantage from all that pace. Magallanes can go up front with David Villa. We were beaten by Bordeaux when we played them in France, but with a fresh start, in our own stadium, maybe we can restore a little pride. Maybe… 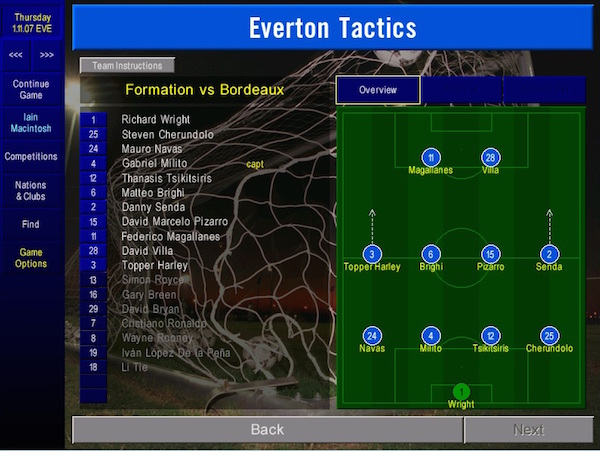 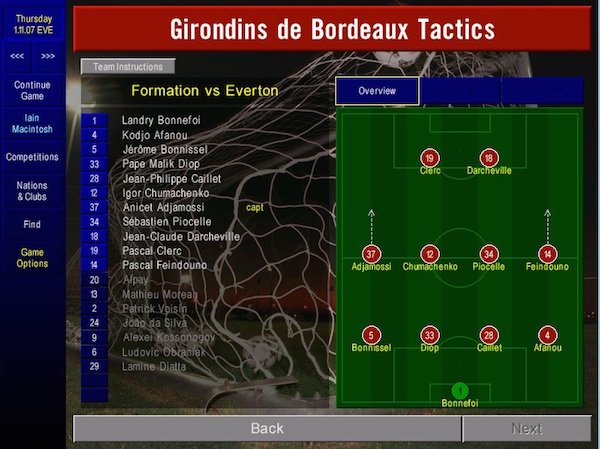 Well, well, well. The scoreline says 2-0, but if it said 4-0 it would still be flattering to Bordeaux. Long live the four four fucking two. We slapped that lot around the face, pulled their pants over their heads and kicked them down a flight of stairs. A man of the match performance for Gabriel Milito was the most gratifying aspect of the night though. He’s been loathsome this season, but hopefully this will signal a return to form. Almost every player had a shot on goal, we put nine on target and we were never troubled at the back. That felt good. That felt really, really good. 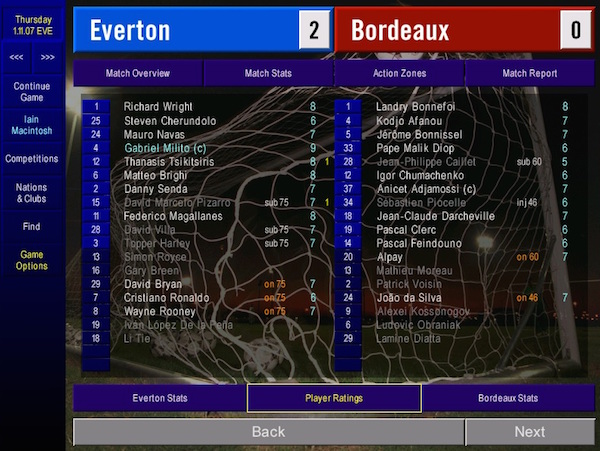 Now to see if we can do it in the league. We’re away from home again, this time to struggling Coventry. They also play 4-4-2, so I see no reason to change. I’m a little worried about Topper Harley, down to 87% fitness, but with Mauro Navas suspended, I have no choice but to play him. Ryan Williams returns to the first team after a long absence because he’s the only winger in the squad. 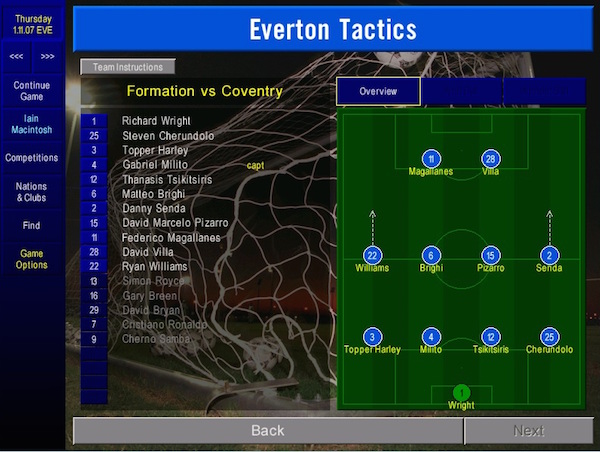 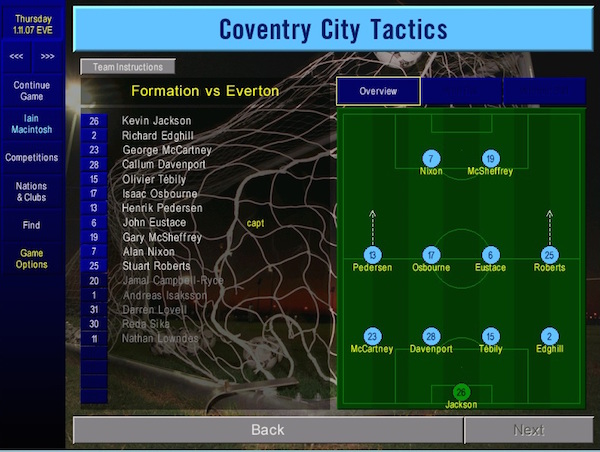 This was my fault. All my fault. We were winning. Magallanes had put us in the lead and we were winning. We weren’t playing particularly well. We were making chances, but we were giving up more. Williams was fine on the left, but Senda markedly less so on the right. And so I decided, with 15 minutes to go, to make a change in an effort to stave off what was looking like an inevitable equaliser. I moved to a narrow 4-3-1-2, packing the midfield to see the game out. Within eight minutes, Coventry had scored twice. Also, we’ve lost Milito for three weeks. I am not in a good place right now. 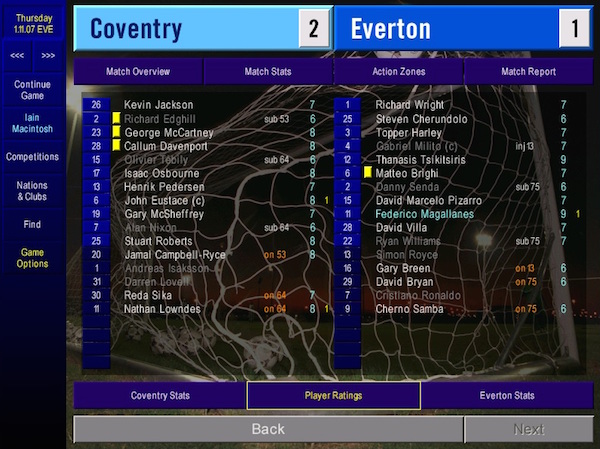 Now, don’t laugh, but if we can take something off Real Madrid, we might actually have a chance of getting out of this Champions League group. And why not? We can…erm…we have…er…oh look, we’ll stick with 4-4-2 and we’ll just see what happens, eh? We’ve got nothing to lose. Except the game. And the outside chance of continued European football and the transformative riches that come with it. And our dignity. And my job. And this series of blogs. Sigh. I need a poo. 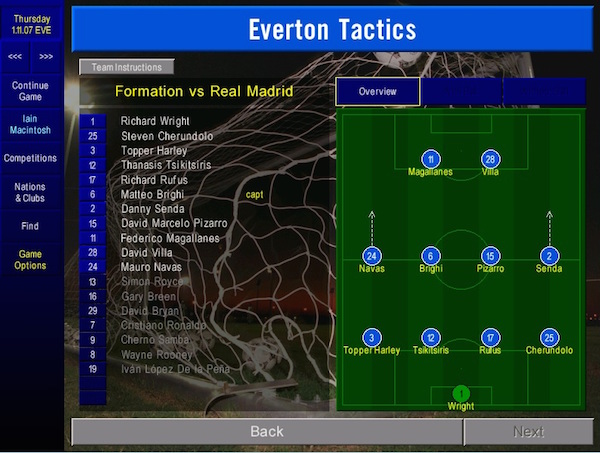 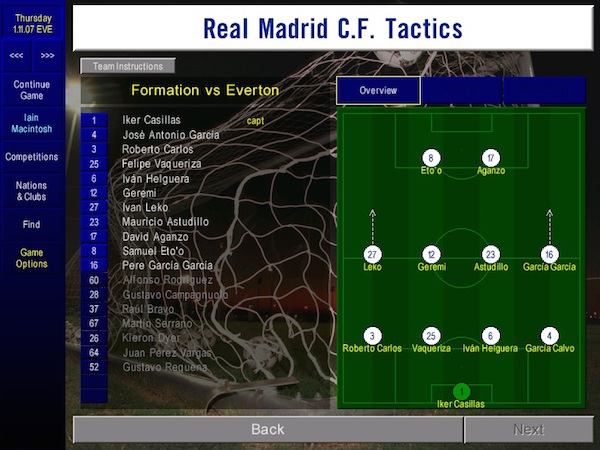 Okay, well, I don’t know what the fuck is going on here. I mean, granted, that wasn’t their strongest team, but we’ve lost three straight games in the league and now we’ve completely outplayed Real Madrid in the Kings Dock. If we beat Benfica away in the last game, we’re in the second stage. And both of our strikers scored. And Richard Rufus was magnificent. And no-one got sent off. These are strange times, my friend. 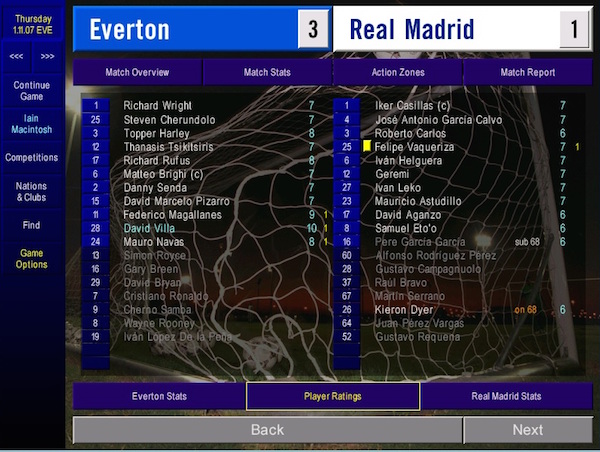 Right, I know that we really need to win every game we play, but we REALLY need to win this one. Forget about Europe, we’ve gone from being two points off the top of the Premier League with two games in hand to being three points off the relegation zone. Navas is serving the final game of his suspension, so back comes Ryan Williams on the left. Let’s hope it works because this is getting silly now. 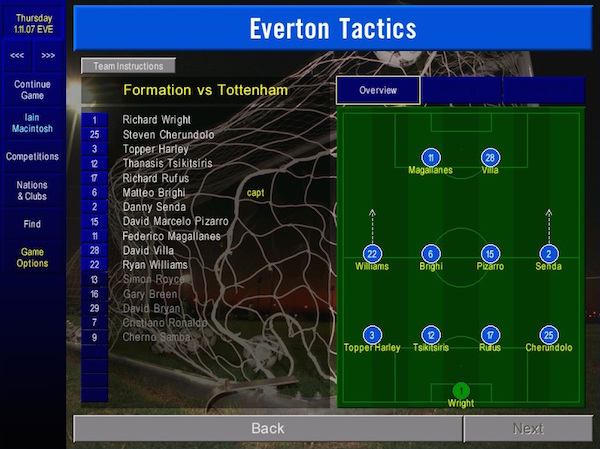 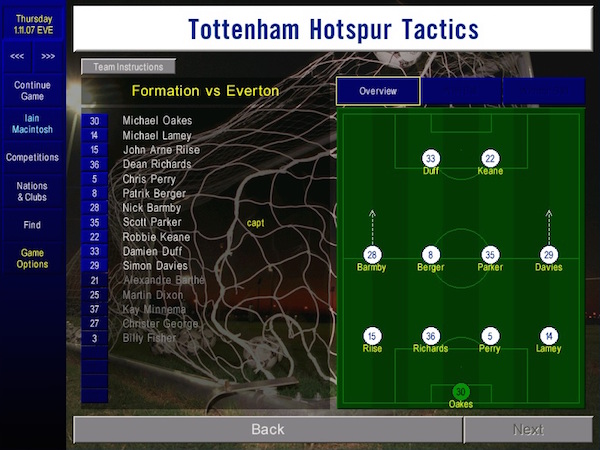 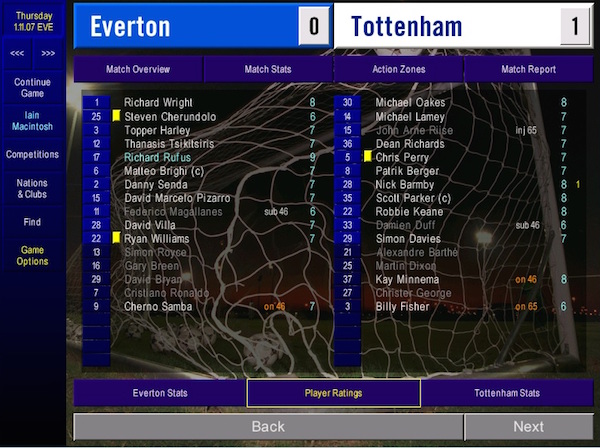 We close out the month with a League Cup game. We’re the holders, remember? As if that matters anymore. As if a gloom hasn’t descended upon us that blocks out all memories of joy and levity. As if all of this isn’t utterly meaningless anyway, a shallow diversion from the horrifying realisation that every passing minute of our lives simply draws us closer to death and that when we slip into the darkness, we will do so without leaving a single trace that will last longer than our children’s children. 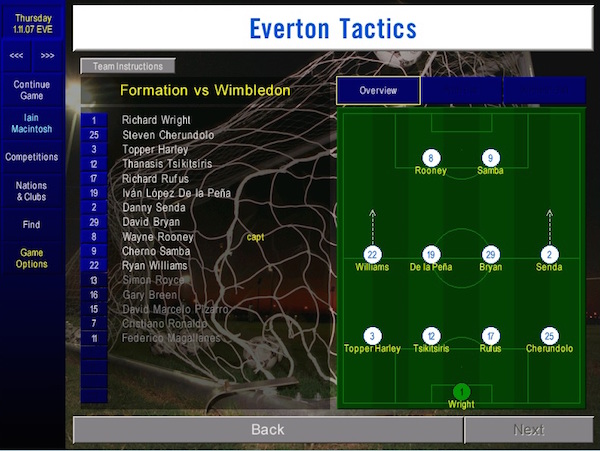 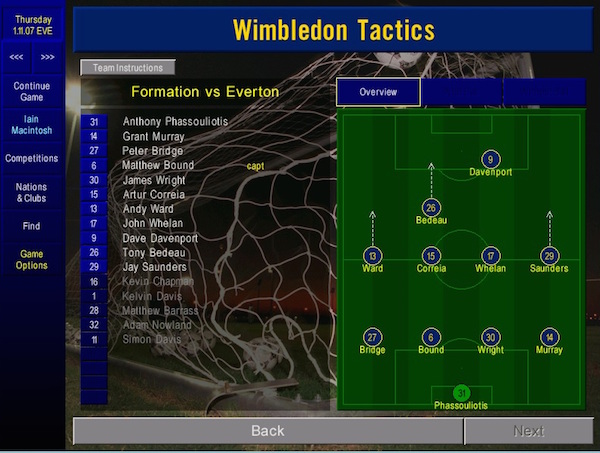 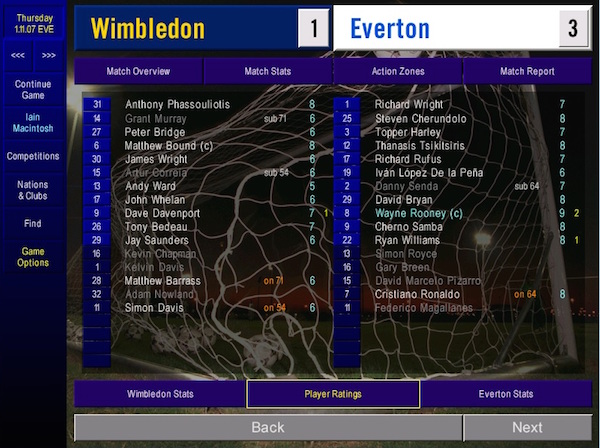 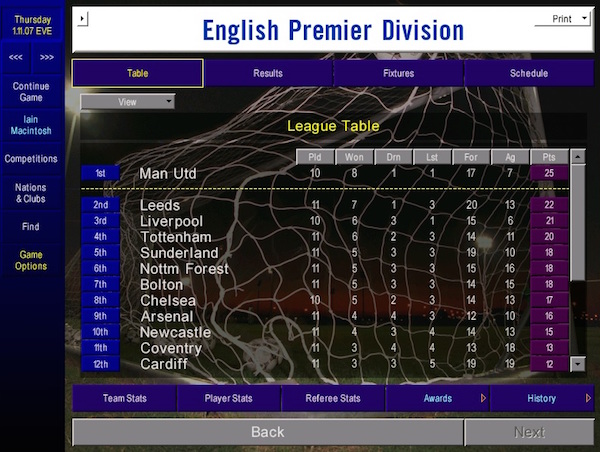 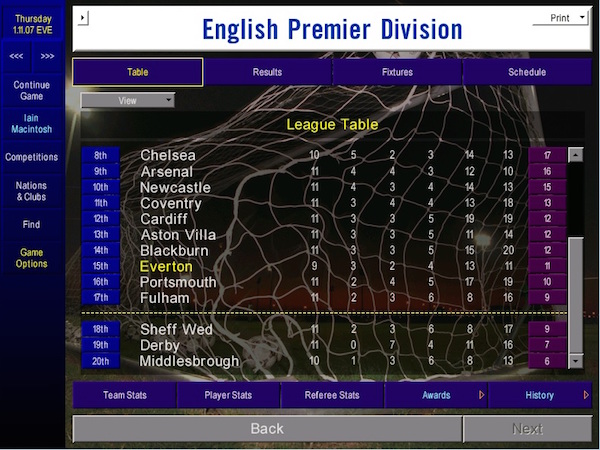 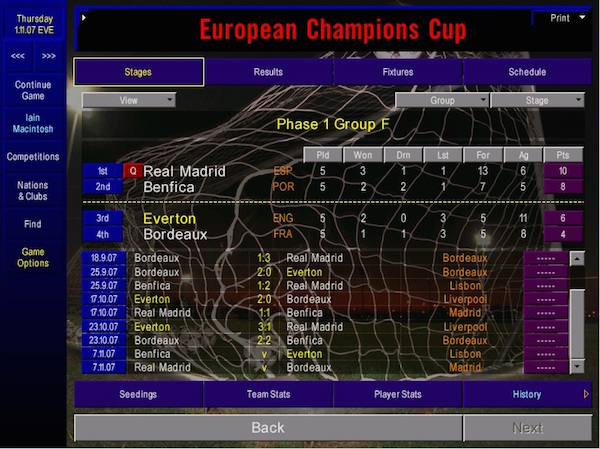 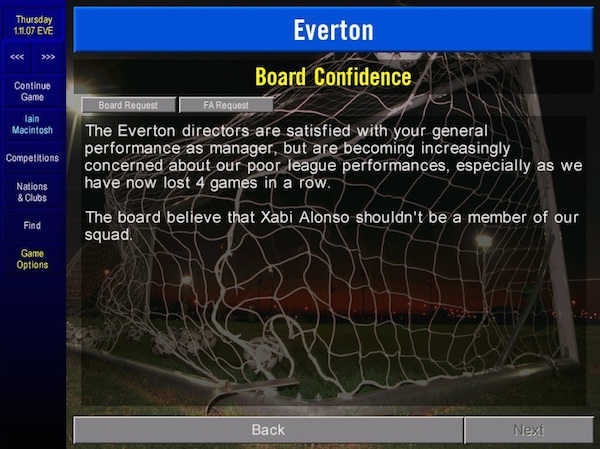