We say goodbye to a former player today. Though not much of one. Pepe Reina was supposed to put pressure on Richard Wright and perhaps replace him between the sticks. Given that Wright has been immense this season, perhaps it’s mission accomplished, but I’m still saddened by how this ended. Reina never settled and I can’t have a £45,000 per week player moaning about gloomy weather and shit telly all the time. And you have to say, we’ve done well to turn a profit here. 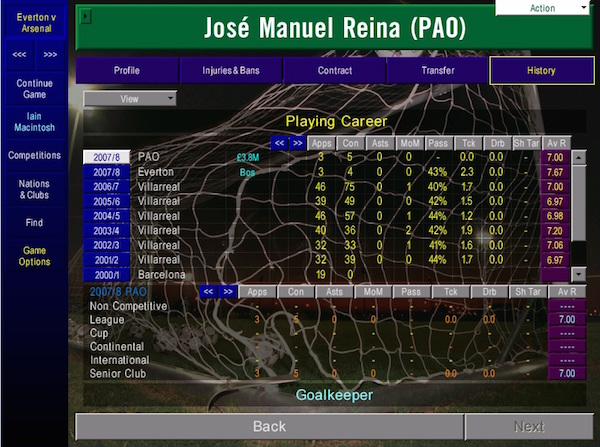 As the good ship Everton slowly veers from the iceberg, the phone-ins and messageboards buzz with excitement. How did this happen? How has a team that look destined for the drop been turned around? It’s fair to say that the supporters are split.

@iainmacintosh transfer listing your attacking players really seems to work wonders for them. A managerial maverick at work

Pah! Only historians debate the past. Visionaries forge the future. And that’s what we’re doing today. Or at least, that’s what I hope we’re doing. Middlesbrough are bottom. Since sacking David Jones in December, they’ve been without a manager. Instead, they have sports psychologist Bill Beswick. He’s playing a very odd formation that is packed with defensive midfielders. I feel like Fantastic Mr Fox when he sticks his nose out of his hole and senses that something is wrong. I don’t like this. I can’t smell Boggis, Bunce or Bean and there’s no tangible reason to be scared, but I’m scared. I keep the team the same, giving Federico Magallanes another chance in this new creative forward role. But I’m watching closely for any signs of danger. 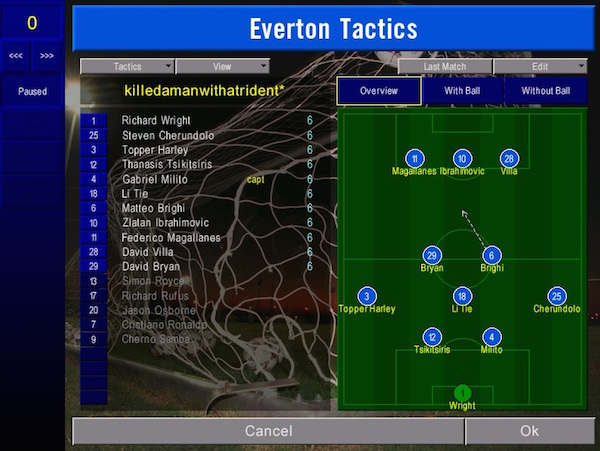 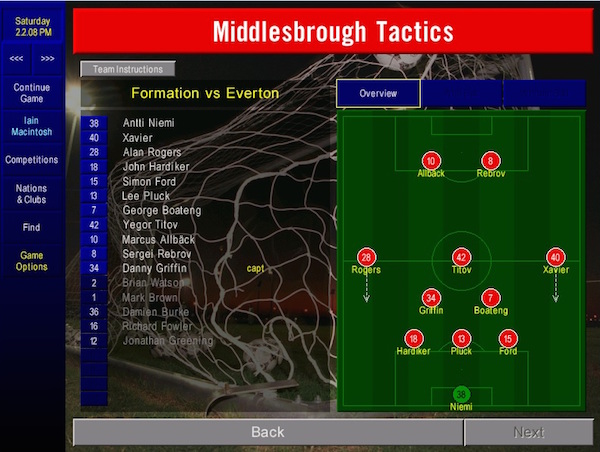 And a fat lot of good it did me. We’re very flat in the first half and Middlesbrough take the lead through the ageless Sergei Rebrov. They’re worth it too. We’re barely getting a kick. I give them 18 minutes in the second half to prove me wrong, but with no improvement I shift to a new shape to try to break them down in the centre. 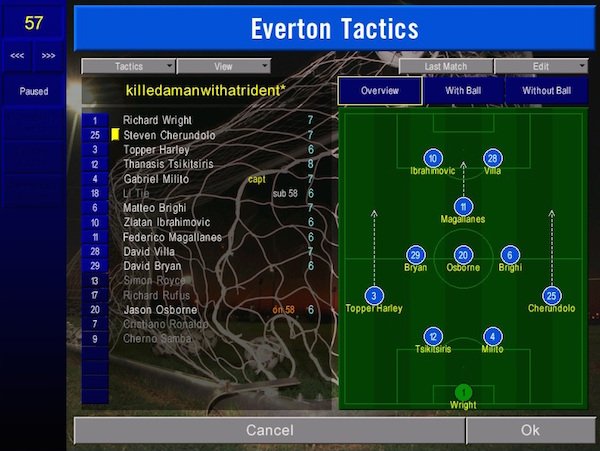 Now we make chances, but a familiar foe stands against us and he will not be beaten. I really should have signed Antti Niemi at some point in the last five years, if for no other reason than to stop this sort of thing happening. 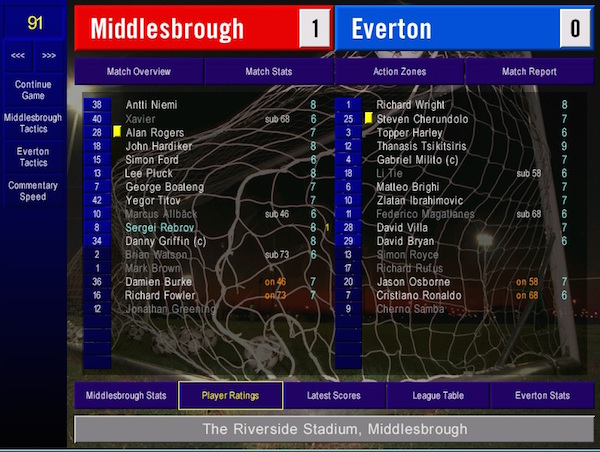 Beswick has done well here. He enjoyed a little bit of good fortune when Zlatan Ibrahimovic’s goal was disallowed, but let’s not be churlish. His unorthodox tactics caught us out. So it’s quite a surprise to see Boro replace him the very next day with Gary Megson. He deserved better than that. I would have enjoyed crossing swords with him again in the future.

We can’t sit by and worry about other people though. We have our own problems. It would have been nice to go into our FA Cup third round tie with Manchester United on the back of a win. Instead, we do it after a shock defeat. I’m sure that will set us up nicely. I take out Magallanes, who has struggled a bit, and replace him with Cristiano Ronaldo. It is unlikely to be enough. This, after all, is the team that won the treble last season. 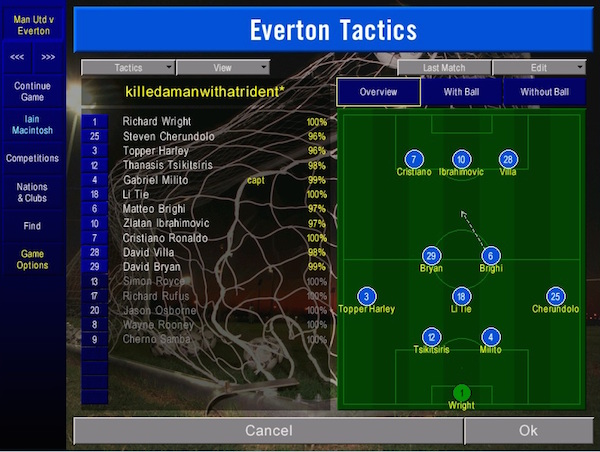 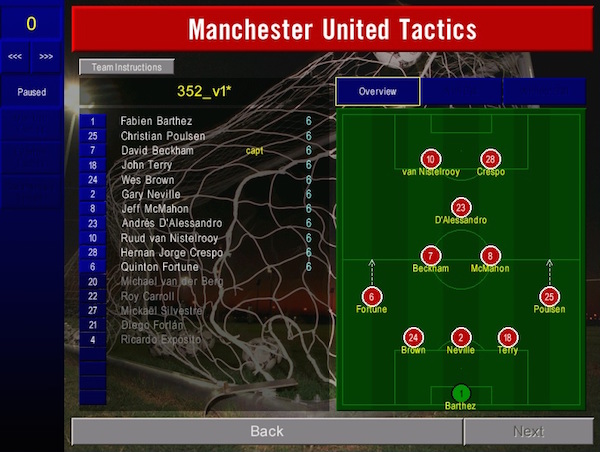 For once, a bit of justice. I’m not saying that we were at our best out there, but we didn’t deserve to lose. Zlatan had a stinker and was duly replaced by Cherno Samba, but the rest of our game was fine. Ronaldo had a goal disallowed, Villa hit the post twice and I was quite surprised when he scored in injury time and earned us a replay. Not least because he hardly ever scores. And also, we’re Everton. Nice things don’t generally happen to Everton. 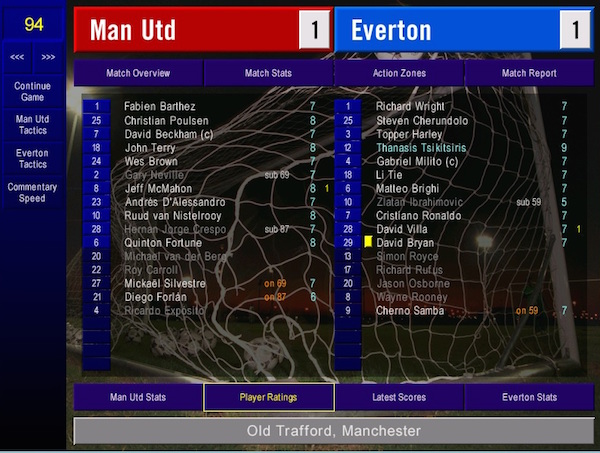 Because of that fixture pile-up in August, we now have to go back to Old Trafford and play them again, this time in the league. After a brief diversion with Jim Jeffries struggling Arsenal, we’ll play Manchester United for a third time in four games when they come to the Kings Dock for the cup replay. So we’re going to get pretty well acquainted with lovely John Toshack and his comforting, powerful musk.

I’ve noticed that Topper Harley has been a little below par, so he’s coming out for Mauro Navas. I know that there’s a lot of love for Zlatan out there, but I can’t condone his last performance, so Cherno will come in as targetman. Apart from that, it’s all the same. Many of my players, by the way, are unhappy about the lack of squad depth. This is problematic because the players I want are proving hard to secure. A move for a Ukrainian defensive midfielder breaks down because of a work permit. We may not be able to do anything until the summer. But let’s get there first before we start worrying. 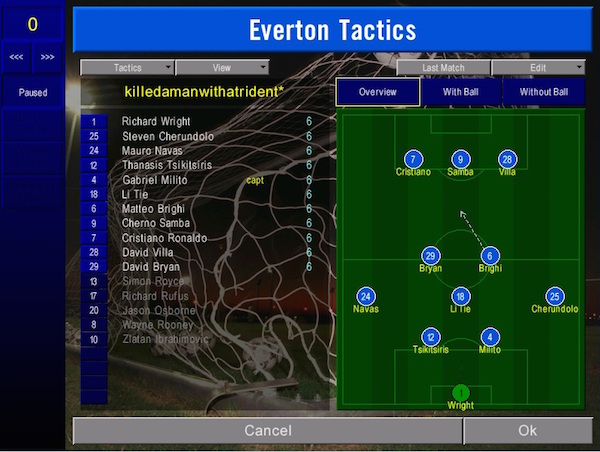 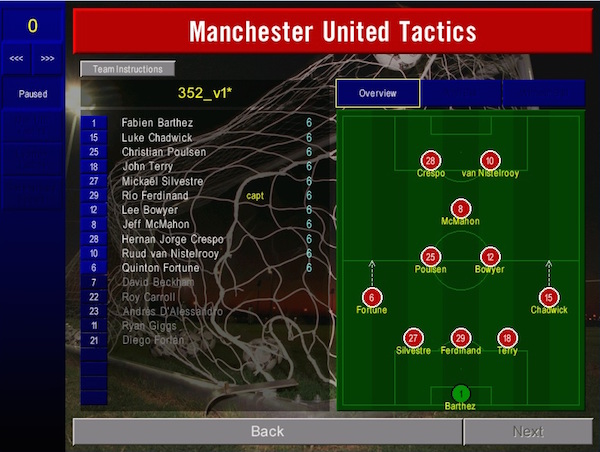 This time there is no hug from Toshack. He just shakes my hand and strides down the tunnel, a face like a natural disaster. This sort of thing doesn’t happen to Manchester United. Not at Old Trafford. Not on the telly. But it DID just happen. We played them off the park and Ronaldo hit a wonderful hat-trick. Cherno was brilliant as the target man. The defence held strong. The board is delighted with the result, though they still seem miffed at our ‘dreadful recent performances’ which is a bit harsh, but I have a thick skin and I’m trying not to let it bother me. This is the sort of result that I could never have imagined just six months ago when I was fairly sure I was going to get sacked. These are good times indeed. 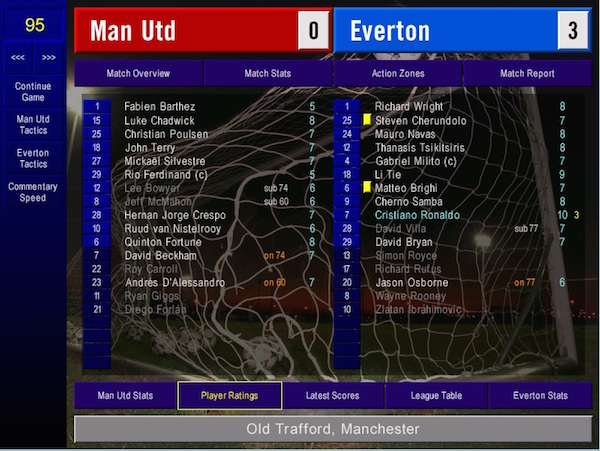 Next up is Jim Jefferies’ struggling Arsenal. It’s fair to say that Arsene Wenger (currently leading the Scottish Premier League with Celtic) will be enjoying the way the Gunners have responded to his departure. They are, and I realise that there’s an element of stone-throwing in glass houses here, completely shit. They’re not in Europe, they exited both cup competitions at the first hurdle and they’re stuck in mid-table, despite having Thierry Henry up front. Actually, they remind me a lot of Everton at almost any point over the first five years of this project. But you can’t take anything for granted in this game. Middlesbrough taught us that. And if you think I’m going to change a team that just humiliated Manchester United at Old Trafford, you must think I’m completely mad. Same team. Same formation. Let’s hope it’s the same result. 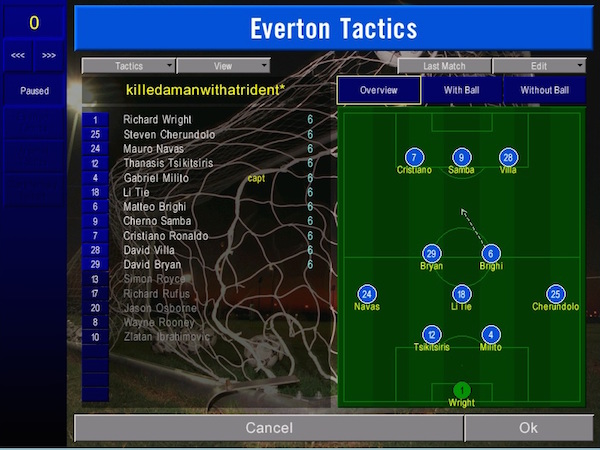 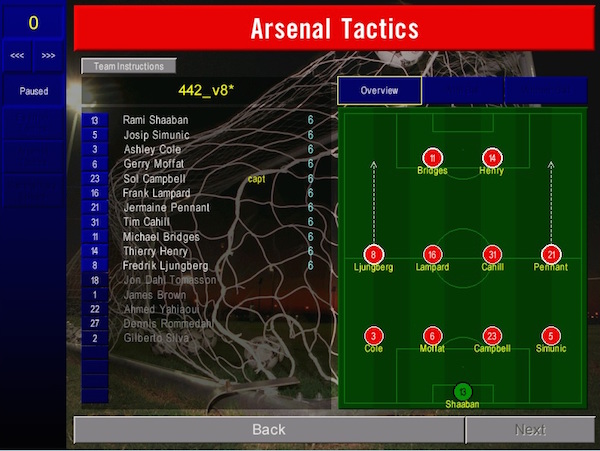 It IS the same result! And isn’t Ronaldo settling into this new role well? He’s making everyone look good now, inspiring them with his brilliance. Arsenal were just blown away here, they were not a threat at any point. That’s two 3-0 wins in a row against the best two teams in the country (when the game starts). We’re up to third in the table now and even the board are commenting on how well the team is performing, even if they are ruining it by remarking on our continued ‘dreadful run of form.’ I try to break them out of whatever this glitch is by requesting an investment in youth development for about the seventeenth time. They refuse to put their hands in their pockets and their contempt for my management continues to linger. This is a concern. But hey, we’re winning games! 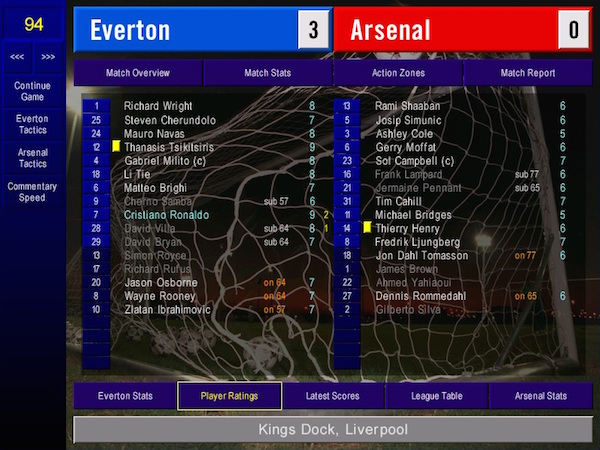 Now back to the FA Cup and our third meeting with Manchester United. If we can put in a performance as good as last time, we should progress and then, you’d have to say, the road to Wembley is well lit and wide open. Topper Harley will return after his rest, but there will be no further changes. 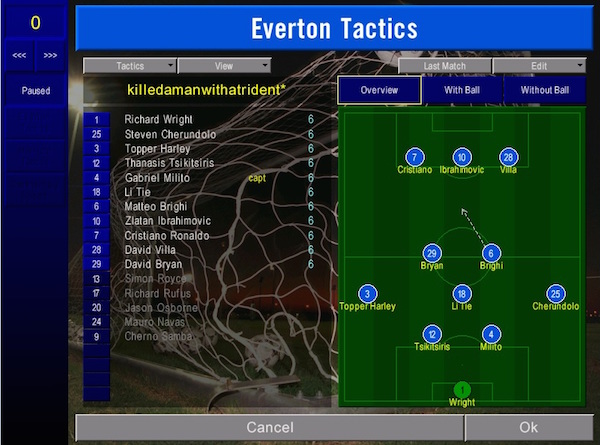 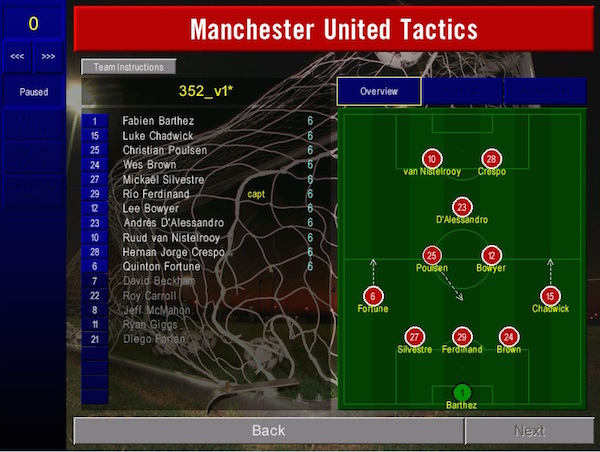 You would have to say now that we can count ourselves as genuine rivals to Manchester United. Last season, we chased them all the way in the hunt for the title. This season, we’ve smashed them up in the league and knocked them out of the cup. The rivalry with Toshack is real. But so too is the respect and the burgeoning home-erotic tension every time we hold each other. He just smells so reassuring.

We took the lead through a penalty, we don’t get many of those, effortlessly converted by Ronaldo. We should have doubled the lead, but we wasted too many chances and then lost our lead too soon. After that, there was no separating the two teams. Full time came and went, so too did extra time. In the end, it was settled from 12 yards. Our players were nerveless. Theirs were not. That was the difference. This month did not start well for us, but it’s certainly finishing in a bit of style. 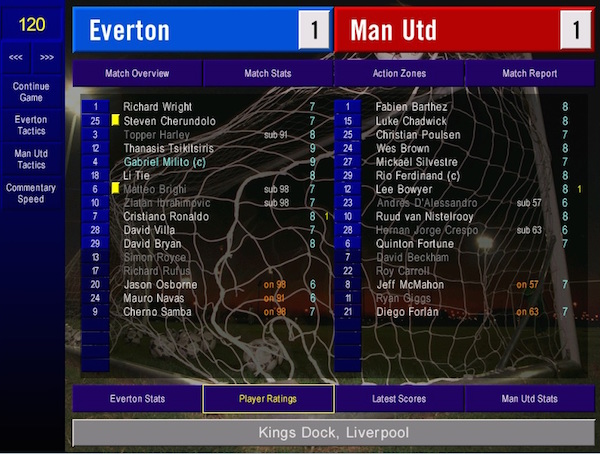 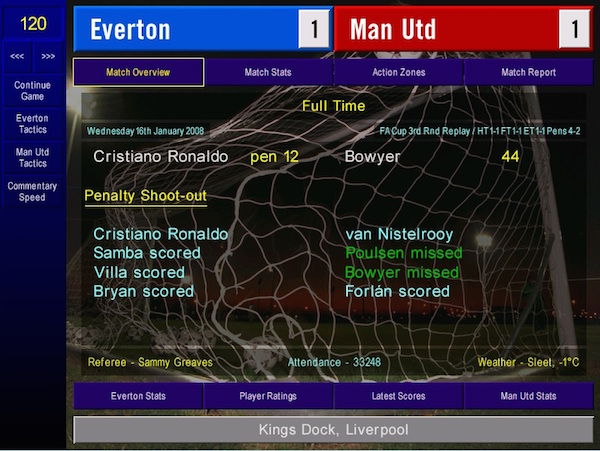 And so to the final league game of the month, the visit of Lovely Leeds. They’ve done well under Alex McLeish, rising to fifth in the table just a couple of points behind me. Again, we’re not going to make any changes, though I do need to give young David Bryan a rest soon because his fitness is falling. Unfortunately, with Xabi Alonso and David Pizarro still unsold, I don’t have much cover. He’ll have to carry on for now. 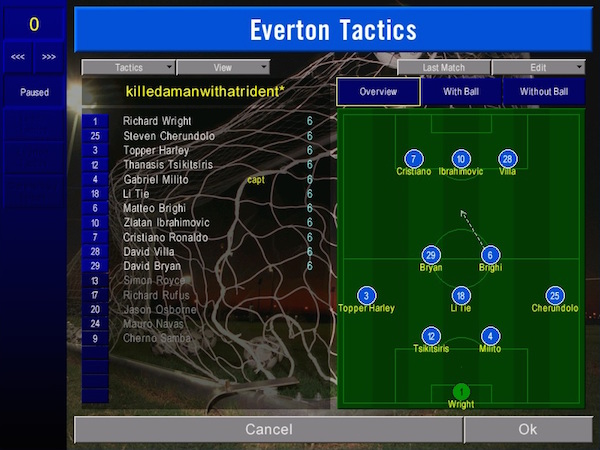 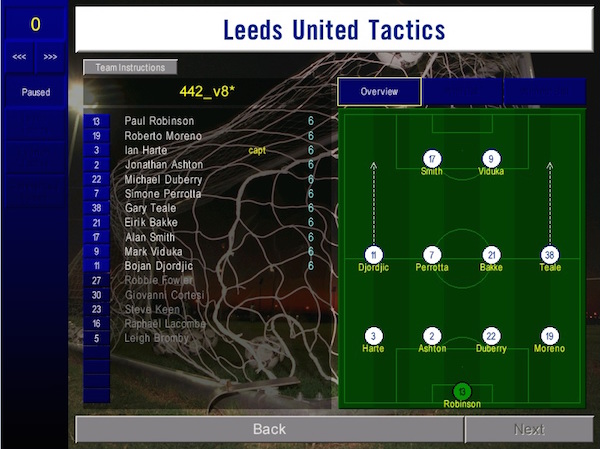 A sticky performance, but a result that we might not have attained earlier in the season. Marginally the better side throughout, we took the lead on the hour when the Greek lad headed home from a Ronaldo cross, but Leeds responded well and Roberto Moreno quickly equalised. After that, it was one way traffic from McLeish’s men and I was forced to shut the game down and preserve the point with a 4-5-1. That’s okay though. Just because we’ve had a few good results, we shouldn’t expect to march to places like Elland Road and take victory for granted. 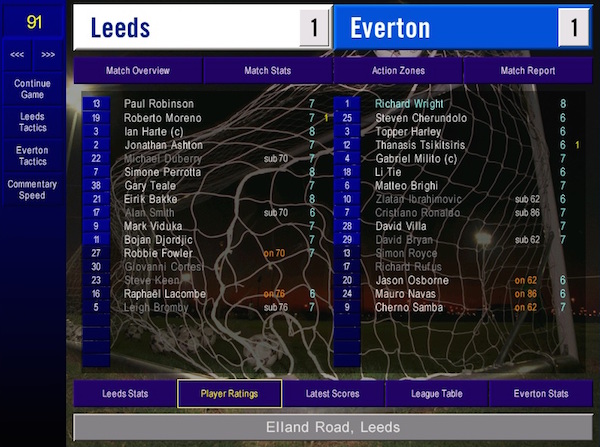 We should be able to beat bleeding Leicester at home in the cup though, shouldn’t we? They’re 16th in the second flight and they’ve got Darren Eadie up front. After his brief revival, Zlatan has gone shit again, so this is his last chance before I have to give Cherno a swing at the target man role. My patience has limits. But this is a perfect chance for him to get going again. 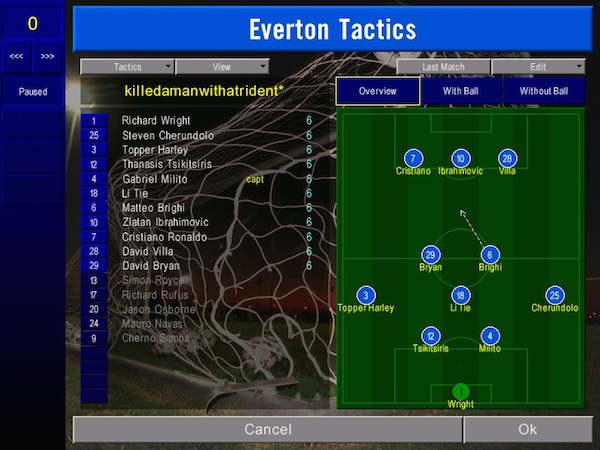 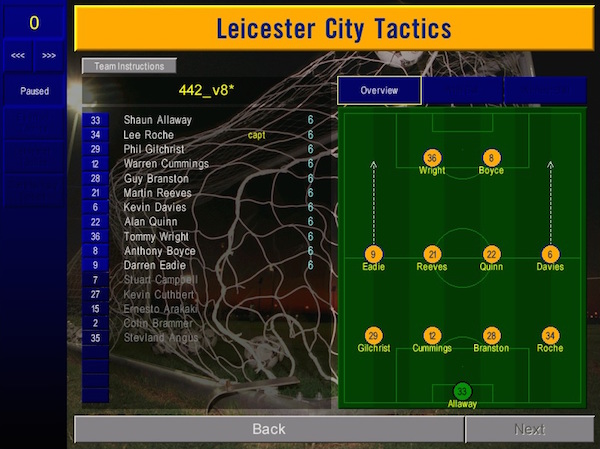 But he didn’t want to take it. We didn’t need him anyway. We had goals from elsewhere, including another for Ronaldo, his 11th of the season, but when I withdrew Zlatan from the fray, Samba came on and scored. So that’s that settled for February. And let’s not be too down. We’re into the fifth round of the FA Cup and we knocked the best team in the country out back in the third round. There’s a chance to do something here. 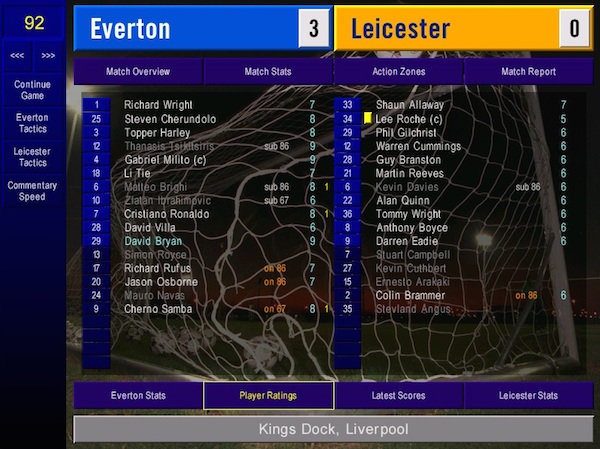 So, let’s review: We’re 4th in the league; we’re cruising in the cup; we’re scoring goals for fun; Ronaldo loves his new role. That must be enough to cheer the board up, right? Right? Oh. 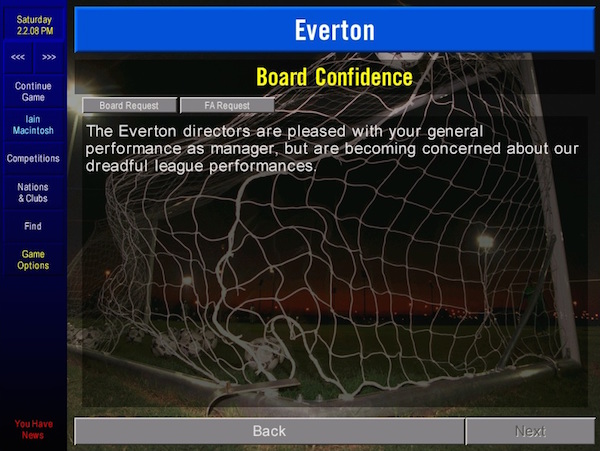 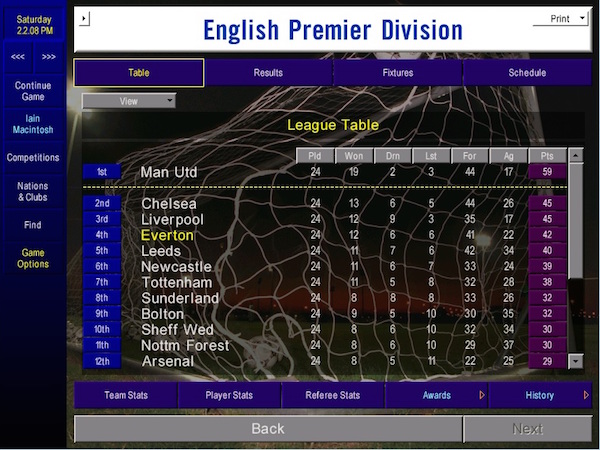 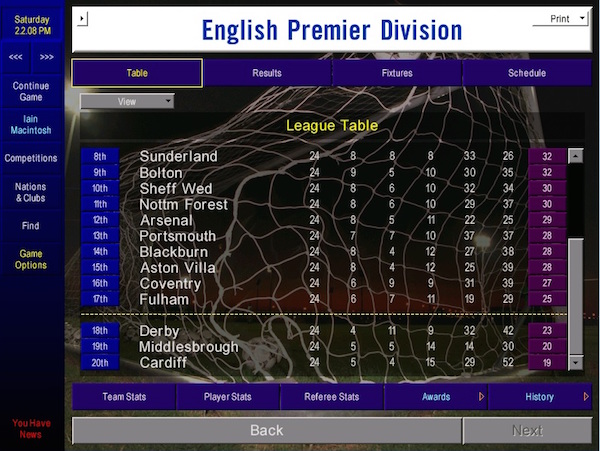