@iainmacintosh @thesetpieces Oh my giddy aunt you are going my nut in with your stupid formations and persisting with Samba. Pick your best

@iainmacintosh at the risk of sounding like the slave who rode behind Caesar at the Triumph: “Everton will make it, you may not”

@iainmacintosh @thesetpieces Your mate 'Tim' is bang wrong about CM not liking 2 strikers. The answer is 4-1-3-2 Iain.

You wouldn’t believe that we’ve just won five league games on the bounce, would you? Or that we haven’t conceded in 540 minutes. Or that we’re fifth with two games in hand. No, no, no. Everyone wants to focus on the silly little things like getting gubbed six nothing by Real Madrid, crashing out of the Champions League, messing up the UEFA Cup and relinquishing our hard-earned League Cup with a spineless defeat to Nottingham Forest while the squad I’ve so patiently assembled tears itself apart in front of me. You people are awful. But I do like you.

Now, I know that a lot of you will have looked at Tim’s uber-aggressive three striker formation from the last episode and you’ll have had your doubts. You’ll think, ‘One win over a crap Blackburn side is no mandate for shifting to such a reckless tactical shape,’ and you’re right. You really are. Especially against a team as good as Claudio Ranieri’s Chelsea. I mean, it would suicidal to go out there with three strikers against one of the best teams in the league, wouldn’t it? 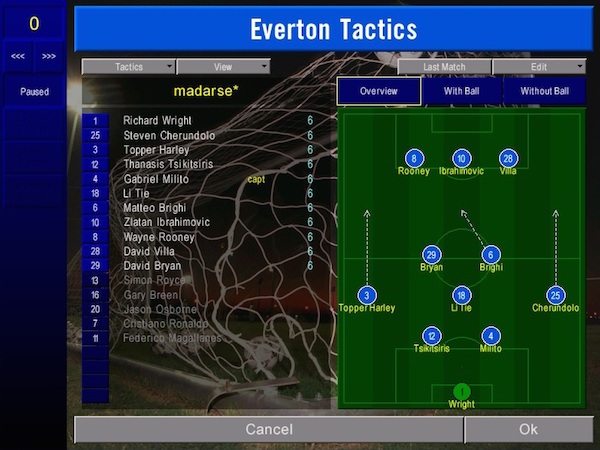 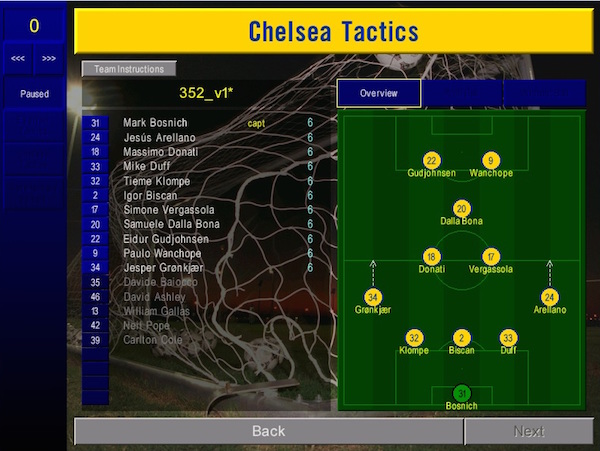 I know that hindsight is always 20-20, but looking back I do think that the appropriate time to revert to a more prosaic, defensive formation was after half an hour when we were 3-0 up. I know, I know. People will say that I’m being too hard on myself and I accept that viewpoint, but I really do think there was a case for shutting the game down at that point rather than getting over-excited, spinning around on my chair, shouting, “Oh my God! I’ve cracked it!” and then watching in horror as Chelsea quickly restored parity.

Still, let no-one say that you don’t get value for money on your season ticket at the Kings Dock. Positives? Well, Matteo Brighi loves his new found freedom and there were goals from Zlatan Ibrahimovic and David Villa. Negatives? Our clean sheet record is properly fucked. 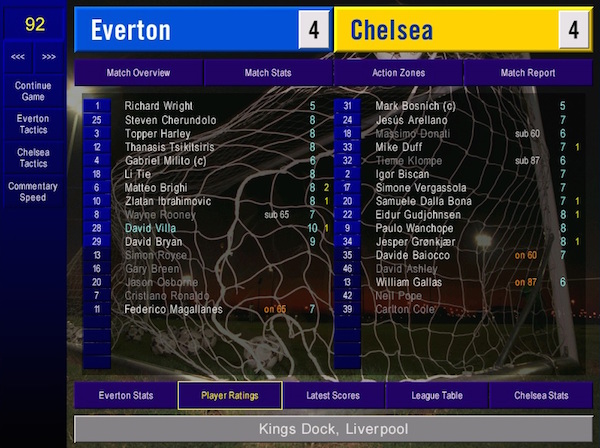 Weirdly, because of all the fixture chaos at the start of the season, our next league game is also against Chelsea. Now, I’ve been tinkering with Tim’s tactic with the reserves, trying to find a way to shore it up a bit at the back and make it safer. You’ll see here that the wing-backs don’t push up as much as they used to, but they’re still allowed to run with the ball. Let’s see if it works. Danny Senda steps in for the tiring Steven Cherundolo, but there are no further changes, your honour. 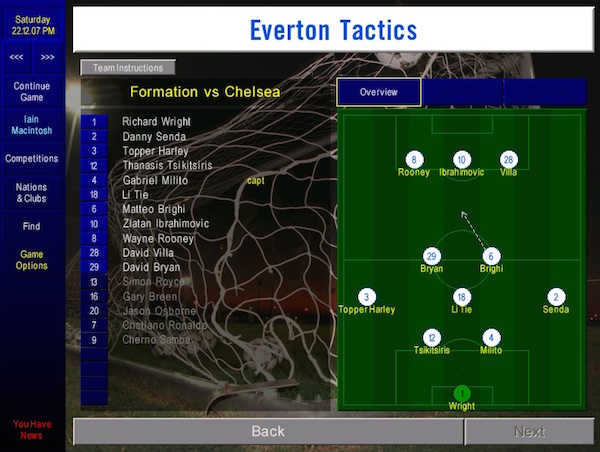 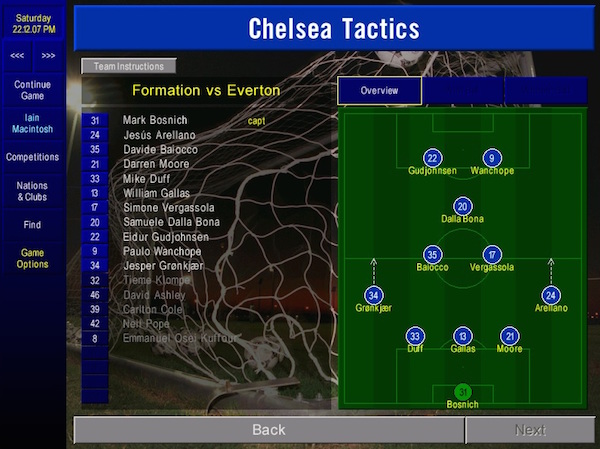 Better. And now the tables have turned. Chelsea go in at the break with a two goal lead, but we’ve not been too bad at all. A couple of changes, the introductions of Cherno Samba (two goals all season until this point) and Cristiano Ronaldo, seem to tip the balance and this time it’s Everton who haul back the deficit to save a point. I think we might be getting somewhere with this. 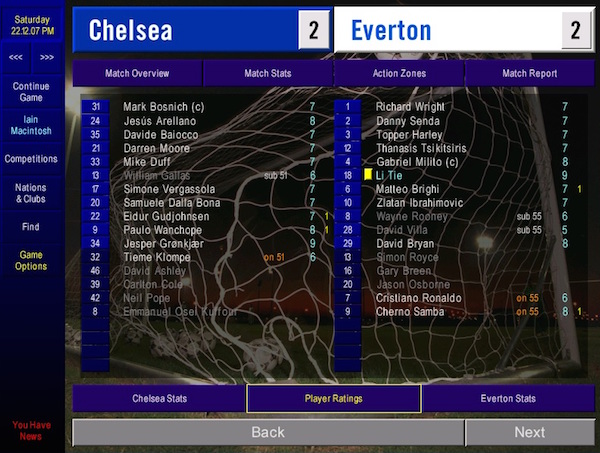 Of course, there’s only one way to find out if a tactic is really any good and that’s to use it against the best team in the game, a team that sweep to victory in nearly every competition, a team so lavishly funded that they have their pick of the greatest players on earth. It’s time to go head to head with John Toshack’s Manchester United. I’ve made a few more changes now. I’ve switched to a more direct style of play and I’m using Zlatan to hold the ball up in the final third. No-one’s allowed to do long shots though. Not even him. 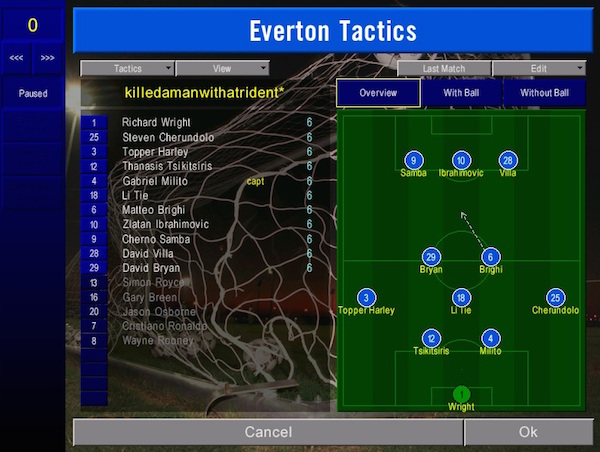 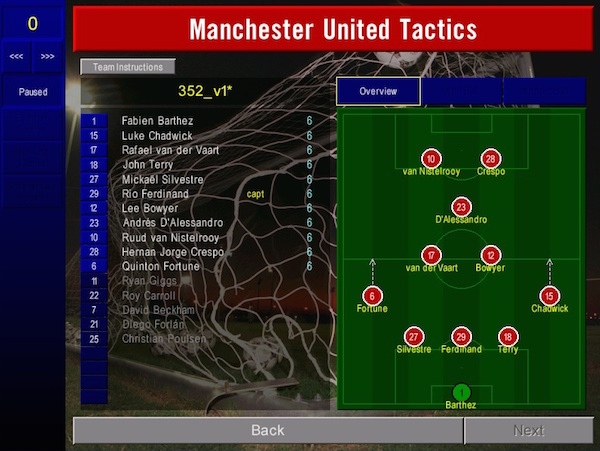 At full time, I go to shake Toshack’s hand, but he grabs me, pulls me in and holds me close, patting me hard on the back. “Well done, son,” he shouts above the roar of the Kings Dock crowd. “Well done.” I let myself unfold into him, my head lolling on the warmth of his thick sheepskin, my nostrils filling with his heady musk; raw Welsh masculinity with just a splash of Old Spice. He’s a proper football man. He knows what I’ve been through. He’s been there himself. He knows what haunts me. And in that moment, intoxicated with emotion, I feel as if I’ve come home.

This isn’t enough to make up for the last four months, but it does at least convince me that I’m not done yet. With the ball played at his great big head, with the instruction to hang on to it and bring others into the game, Zlatan is a man transformed. With more caution on the flanks, we’re better at protecting leads. And with a new, conservative formation for the final stages of games, we’re growing more disciplined. 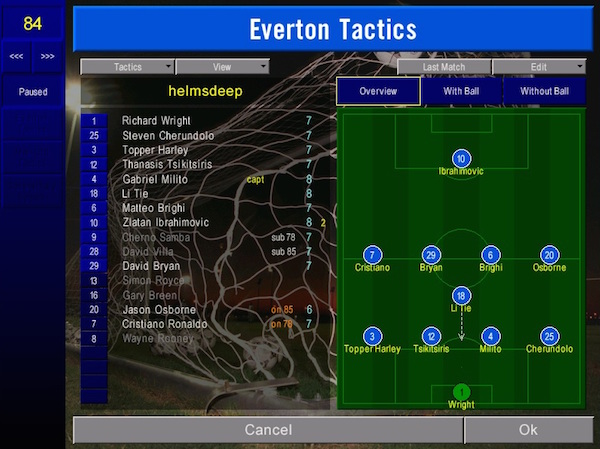 We were well worth this win and, if we can beat Manchester United, we can beat anyone. There’s no need to be afraid anymore. We can use our strikers, we can go for the jugular, we can entertain the fans. Okay, so we can’t hope to win anything this season, but we can certainly make a concerted push for another top four finish. I wish that I had more than £1.1m to spend on reinforcements, but until I ship out a few of the old failures, I’m stuck with the squad I have. But on the evidence of this, they’ll do for me. They’ll do for me. 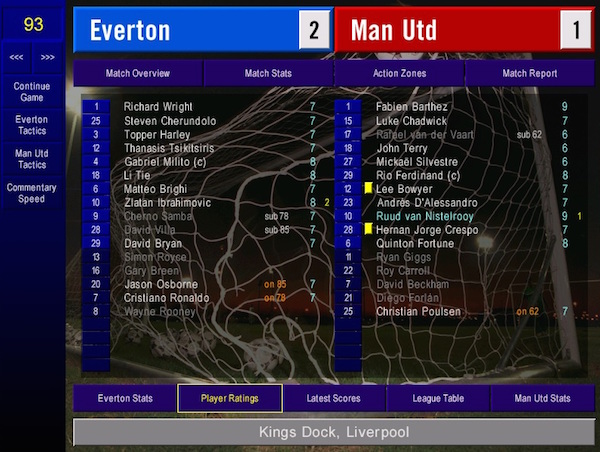 But for all the pleasure to be taken from a result like that, I do feel like the board could chill out a bit. A nine game unbeaten run is fairly concrete evidence that the dreadful run is over, isn’t it? I mean, it’s nearly a quarter of the season. 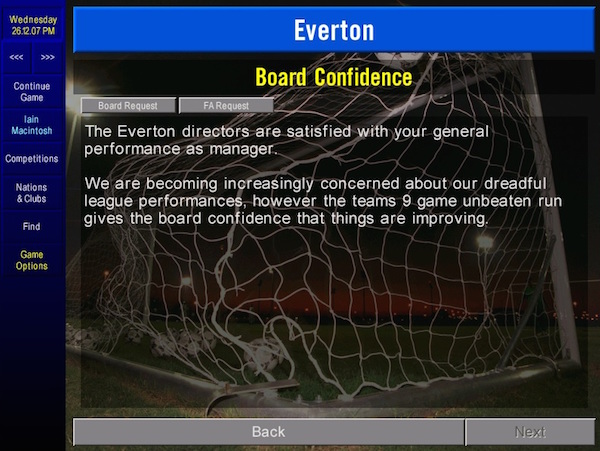 Now, if we can just close out the month with revenge over Nottingham Forest, I can go away happy. I’m not done with tinkering just yet. I want to find a way to bring out the best in Federico Magallanes, who usually plays behind the strikers instead of right up with them. I switch him to a free role, give him free kicks and make him the only player on the pitch who’s allowed to have long shots. I only do that for very, very special people. 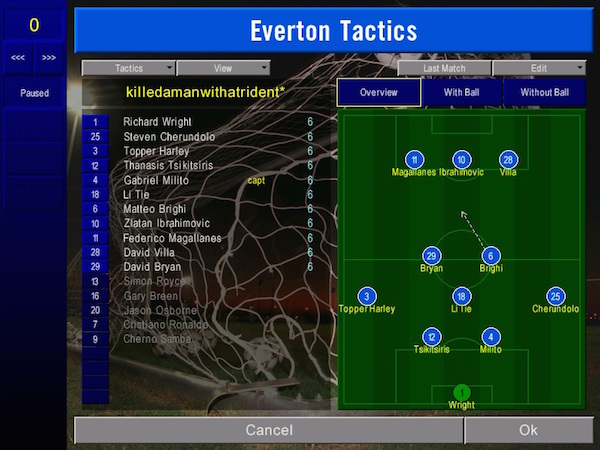 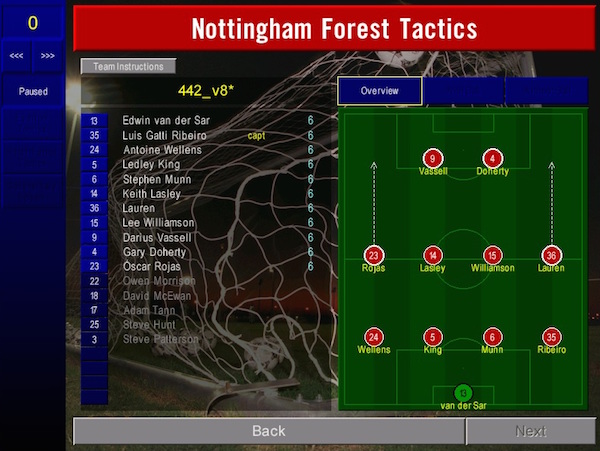 This is marvellous. We are solving problems all over the place. It didn’t quite work out for Magallanes in that free role, but it certainly did for his replacement Cristiano Ronaldo who finally broke Forest’s resistance with a late goal. After so long in the reserves, Zlatan tired quickly, but Samba is a big strong lad and he looked much more comfortable as a target man. Another win. A clean sheet for the first game in three. We’re still fifth in the table which is absolutely fine because we’re Everton. And what’s that? A giant bottle of Scotch and a gaudy trophy for the mantelpiece? Yep. Everything’s coming up Milhouse. 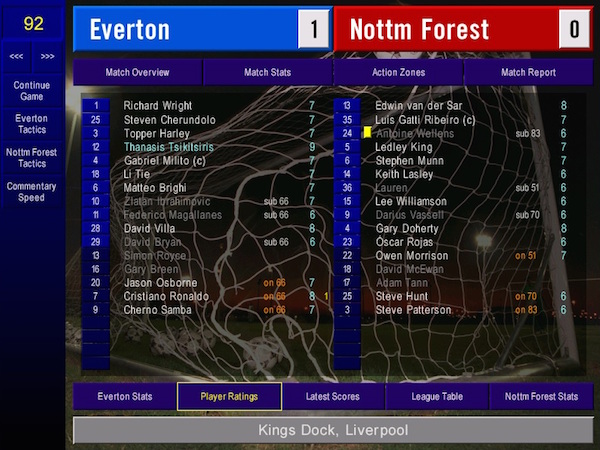 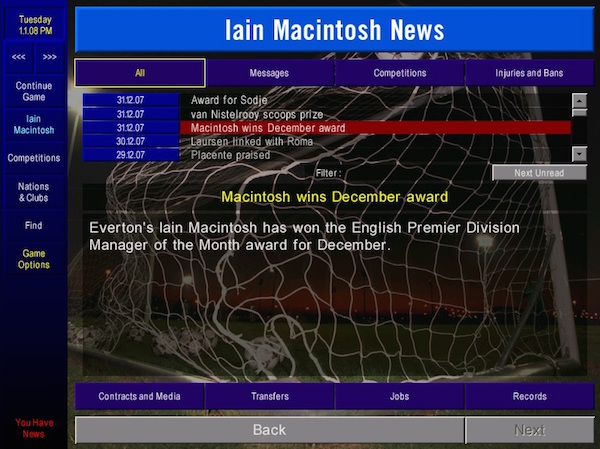 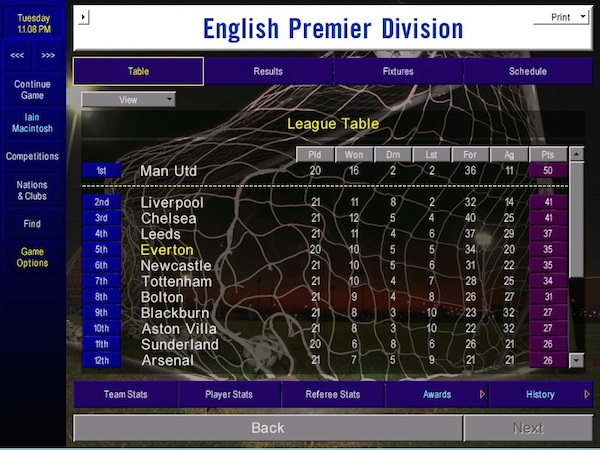 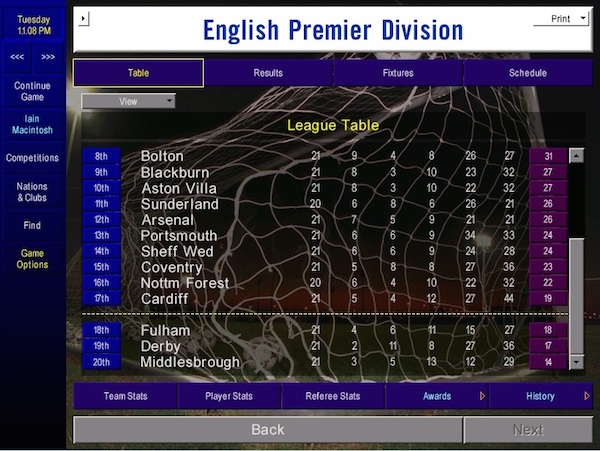