THE MISSION: You returned to Championship Manager 01/02. You rescued Everton. You won something. But after seven years the dream turned sour and after a particularly humiliating Wembley defeat, you walked away. Now rebuild your reputation.

@thesetpieces @iainmacintosh This is one of the saddest things I've ever read.

@thesetpieces @iainmacintosh spineless. What a shame. Getting just rewards now.

The last week has been hard. There’s been no escaping it. Perhaps in London I could slip away into the crowds like a fart in a jacuzzi. You can be anonymous in London. But not on Merseyside. The people of Liverpool have never been slow to thumb their nose at the famous. Everywhere I go, someone has an opinion. Even as my possession are loaded onto the removals van, the driver takes a moment to offer me a piece of his mind.

“You should never have dropped Zlatan, you daft twat,” he says as I sign the paperwork. I smile politely and tip him in coins. “And failing to provide adequate cover for Matteo Brighi was a fucking masterstroke as well, you tight-fisted wanker!” he shouts as I walk away.

So what do I do? I can’t seem to get a job. Spurs didn’t want me. PSV didn’t want me. Ajax didn’t want me. I’m left to watch in helplessness as the season begins without me. And so I do the only thing that I’ve done consistently since this project began. I keep trying. 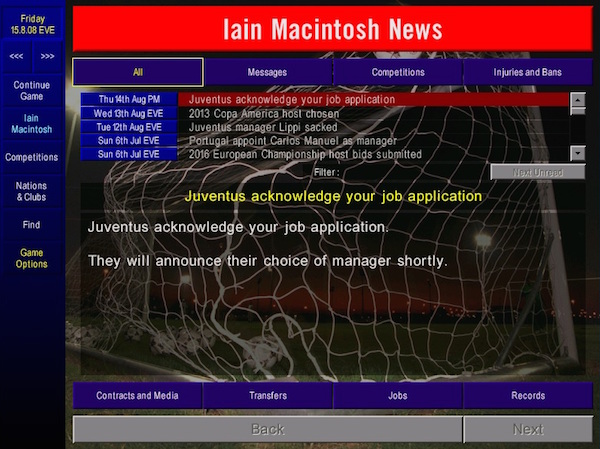 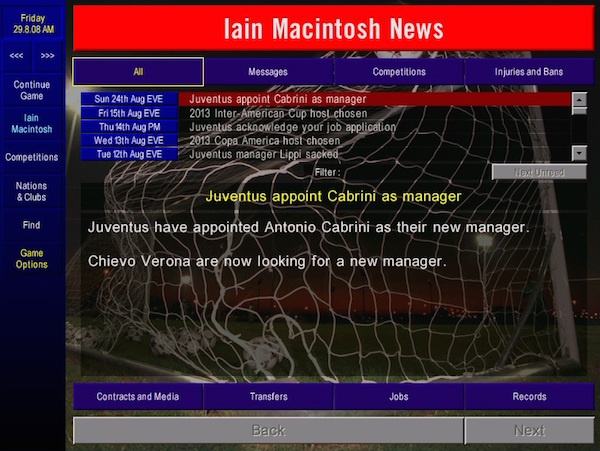 In the meantime, Alex McLeish has put his own stamp on my old Everton side. He’s signed a wodge of mature defenders, a couple of back-up goalkeepers to help out while Richard Wright serves a three match suspension, he’s switched to 4-4-2, pushed Topper Harley and Brighi out onto the flanks and restored Wayne Rooney to the front line. I’m staggered. I tried 4-4-2 plenty of times and it never worked. He must be mad. But it seems to work. 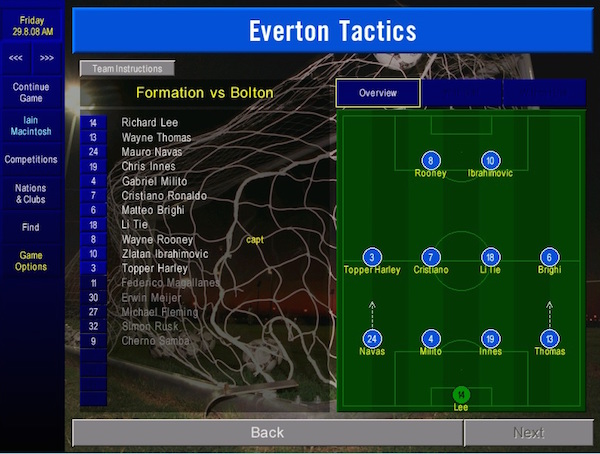 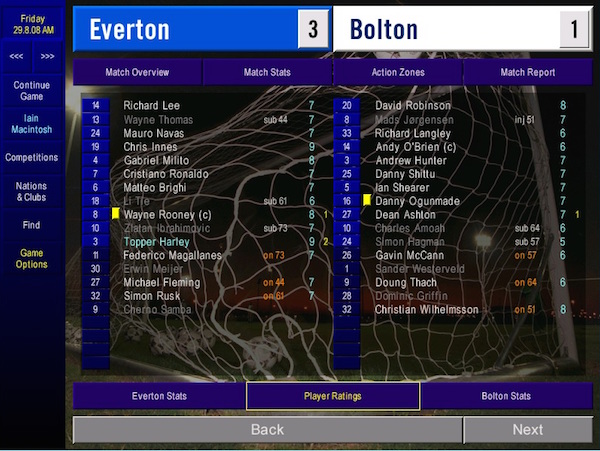 And so I continue to spend my mornings in the reception area of my modestly priced hotel, enjoying free refills of adequate filter coffee and making small talk with the staff. 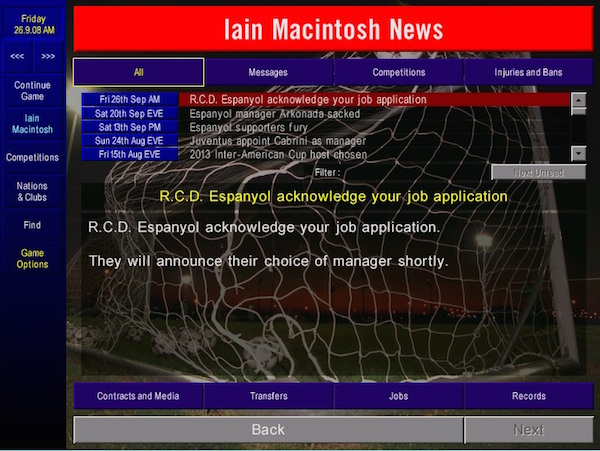 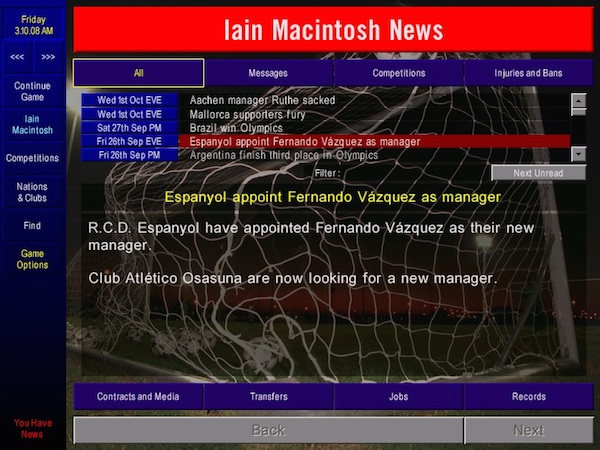 Without me, football continues quite happily. My misery is intensified at the sight of John Toshack’s Manchester United, unstoppable for three years, suddenly faltering. For the first time in an age, the Premier League is wide open and a surprise challenger emerges. 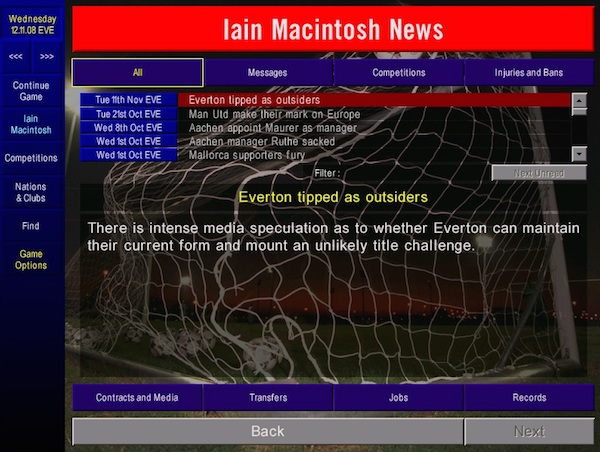 I am just at the point where I’m starting to consider opportunities in the lower leagues when I receive a phone call. It’s Portsmouth. They’re in trouble. And they want my help. I remember Portsmouth very well. At Everton, we beat them in all but one encounter; the game we needed to win to qualify for the Champions League three years ago. They won their last game under a caretaker manager, but they’re 16th in the Premier League, having won only three games as the half way point approaches. Fratton Park holds just under 20,000, but they have some serious money to spend. There’s £35m in the bank and £25m is mine to play with. That’s more than I ever had at Everton. It’s certainly going to be a challenge. A quick glance at their squad reveals little in the way of quality. But it’s a way back…. 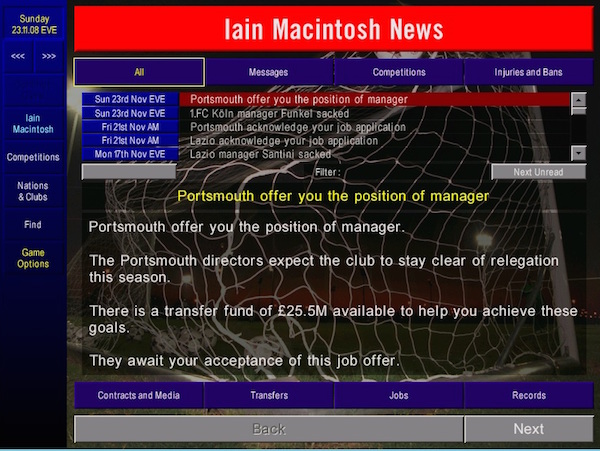 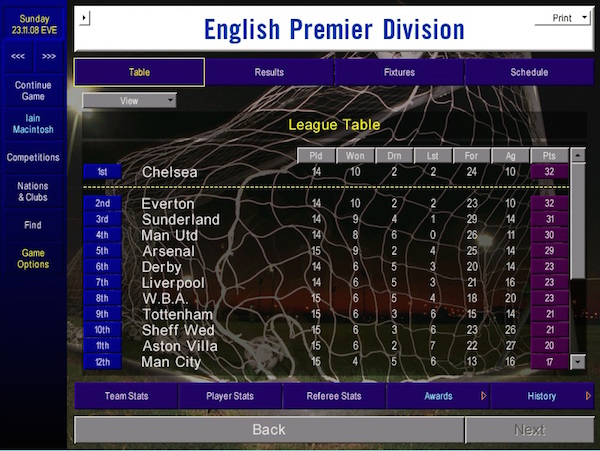 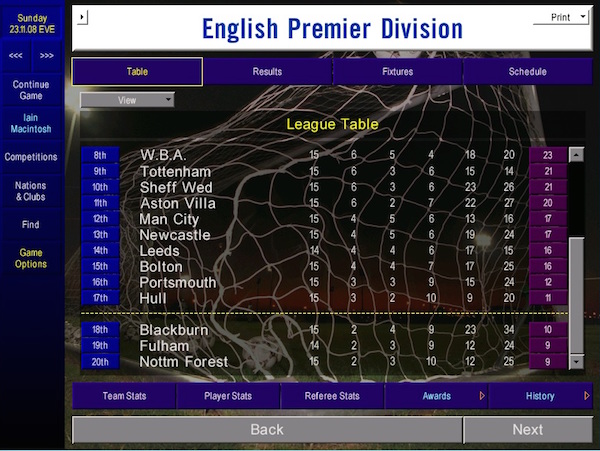 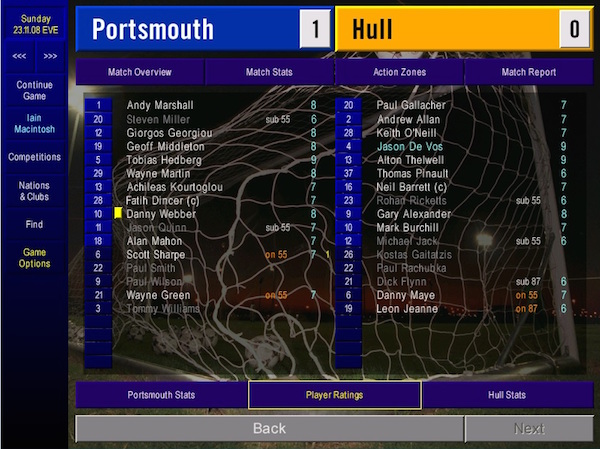 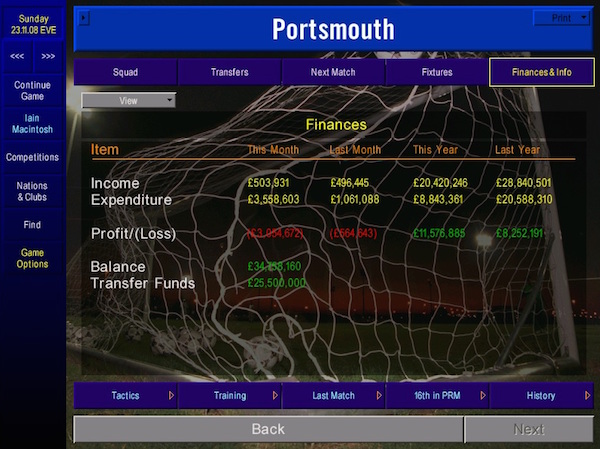 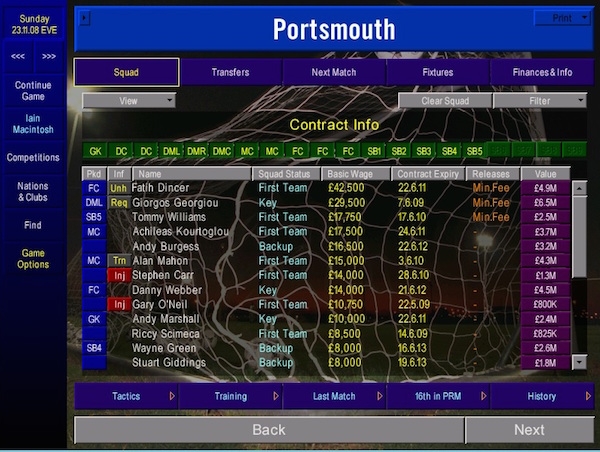 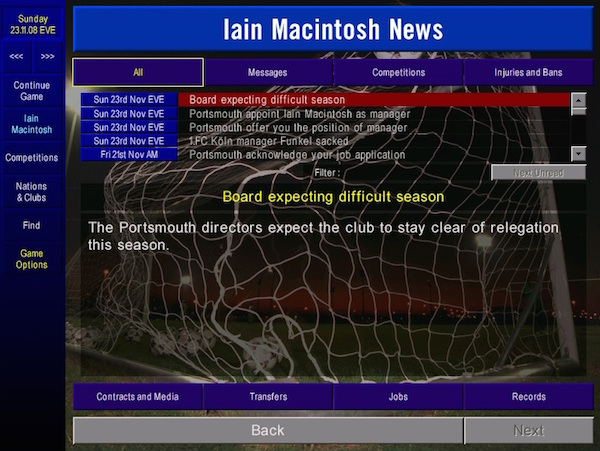 And so, with a spring in my step, I get to work. And it is work too. The whole squad is assessed, player by player. There are few superstars here. Fatih Dincer wants to play for a bigger club, but he’s not in the same class as players that I used to leave on the bench for Everton. Giorgos Georgiou is probably the best player, but he’s already had a transfer request accepted and I can’t convince him to stick around. Alan Mahon, arguably the next best, has already signed for Manchester United, but won’t leave until December. Achileas Kourtoglou has promise, but hasn’t fulfilled it. Then we’ve got loads of 20-year-old Scotsmen and former Old Trafford hopeful Danny Webber. There’s no use in beating around the bush, this lot are crap. I need to overhaul the whole squad.

In fact, I need to overhaul the whole club. The coaches are fairly good, and mainly tied to long contracts. The scouts are dreadful. I found one with single figure ability judging attributes. Enraged, I sacked all of them and start again. God knows, I’ll need to quickly identify talent. Halfway through the eighth season, there’s no value in knowing the powers of people like Mike Duff and Mark Kerr. They’re all approaching 30.

I then spend several hours scouring the transfer market, identifying targets. Naturally, I start at Everton but they’re not playing ball. Bids for Brighi, Federico Magallanes, Ryan Williams and Mauro Navas are all rejected. It gives me no pleasure to see Cherno Samba out for almost a year with a cruciate injury. Moving to Europe, I make bids for Petr Cech and Dimitar Berbatov, both of which are accepted, but both of which rely on work permit regulations. That may take some time. Too long for the first game of my new life.

Sheffield Wednesday away is such an awkward first fixture. They’re not so good that defeat can be shrugged off, they’re not so bad that they can be swept aside. They also play with an irritatingly inventive formation that will require careful attention.

Reasoning, as I always do, that some variant of 4-4-2 is always the best place to start, I shuffle my deck accordingly. This team is set up with caution in mind, but hopefully with enough oomph to get a result. They can pass short, they’re encouraged to play through balls for Webber to race onto, and there’s lots of invention on the wings. Defensively, there’s a lot going on under the hood. Everyone is man marking and our wingers will come inside to take Douglas Ramsey and Craig Easton, giving us an extra man in the middle, one to stop Steven Thompson’s runs, another to make the counter-attacks.

I haven’t put this much thought into an Everton team since the impoverished days when we needed every possible advantage. Perhaps I should have kept doing it. Was I arrogant to think that we had improved to the point where it was more advantageous to give the players freedom and then let the opposition worry about us more than we would worry about them? Perhaps. But those days are gone. We cannot change the past. The future, however, is up for grabs now. 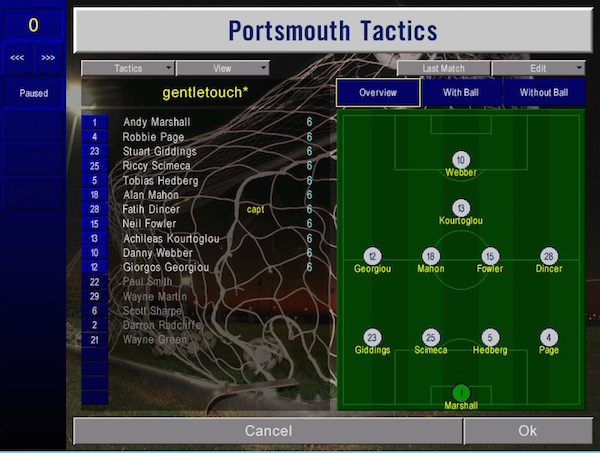 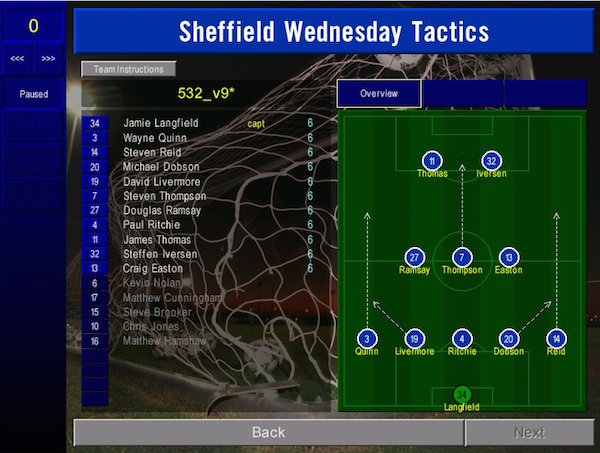 I tell you this. I tell you this for nothing. We left so much out there on that football pitch, so much sweat, so much blood, that scientists could rebuild every one of my players with the discarded DNA. Wednesday fought for everything, they were in no mood to allow me a honeymoon. But we were better. We held out. Just about.

What a start to the game. Webber scored early, Steffen Iversen responded and in the 18th minute, Kourtoglou put us back in the lead. Dincer, awarded the captaincy in the hope it might cheer him up a bit, was fairly average, but no-one else was. We lost Mahon to a knee injury early on and replaced him with Scott Sharpe, a man more suited to attack than midfield, but we’re low on numbers. The real problem though was Riccy Scimeca’s inability to match Iversen in the air. At half time, he had to be replaced with Wayne Martin, a curious sort of centre-back in that he has excellent jumping and heading attributes, but single figure tackling stats. Not that I had any choice. If I’d left Iversen to dominate, we would certainly have lost. Wednesday shifted their team around after 50 minutes, necessitating a lengthy counter-shuffle, but they couldn’t break through. We held on for three of the most satisfying points I can recall. 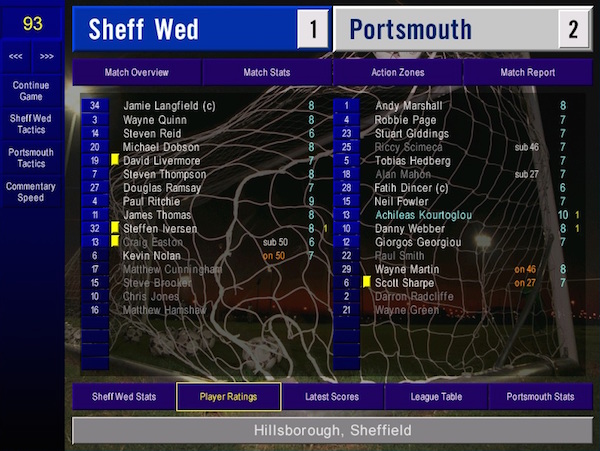 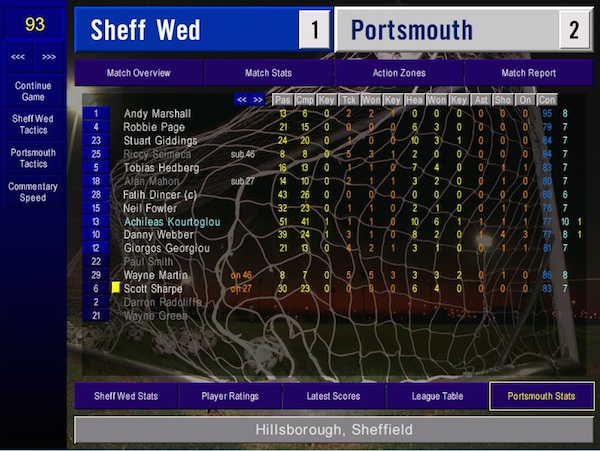 And so, here we are. It’s December 2008 and I have a new home. There is money to spend, lots and lots of money. But there seems to be a bit of spirit to build on too. Facilities are only ‘adequate’ and the stadium is relatively small, but perhaps that will change if we can provide the impetus. I’m genuinely excited to see what I can do here. I think we can win things. Maybe not the league. Maybe not in Europe. But I reckon there’s a cup run or two in this lot. And by the time I’m finished in the transfer market, well…who knows?

Frankly, if it wasn’t for the news from Merseyside, I’d be turning fucking cartwheels. 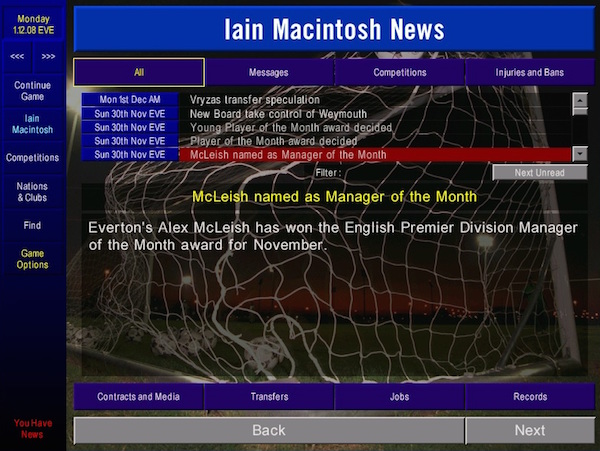 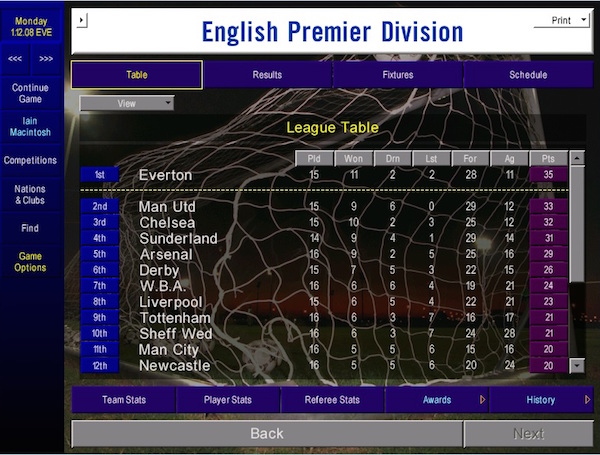 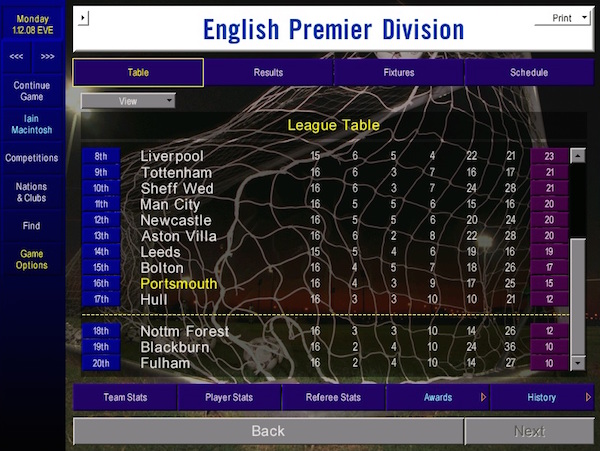