THE CATCH: Everton were in financial trouble. You had to play for nearly three seasons without resources. The books are balanced now, but all the legendary players have been snapped up by your rivals. Respond. No wait….not like that! 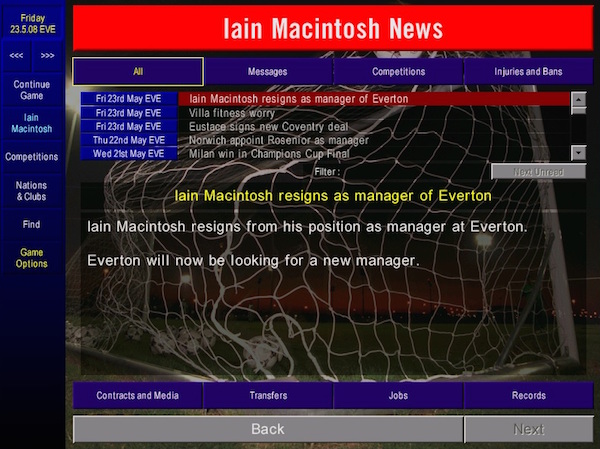 You know, I sort of expected a bit more of a reaction. Nothing dramatic. No hysterics. Perhaps a bit of, “Oh no, don’t leave us. You’ve done so much for the club, you saved us from relegation and the inevitable financial apocalypse that would have followed.” But no. Nothing. I accept that no man should be bigger than the club, but would a whip-round for a card and a cake have been too much?

I had to go. For years, I have railed against those in football who claim, moist-eyed, that they take ‘full responsibility’ for their latest humiliation before popping up to repeat the process all over again. Well, there’ll be none of that duplicity from me.

I was the manager who dropped Zlatan Ibrahimovic for Cherno Samba. I should have been stronger. I allowed the power of narrativium to get the better of me. I dropped the bollock, so I should pay the price. And so, with heavy heart and after a full sixty seconds of finger-hovering, I resign as manager of Everton Football Club. 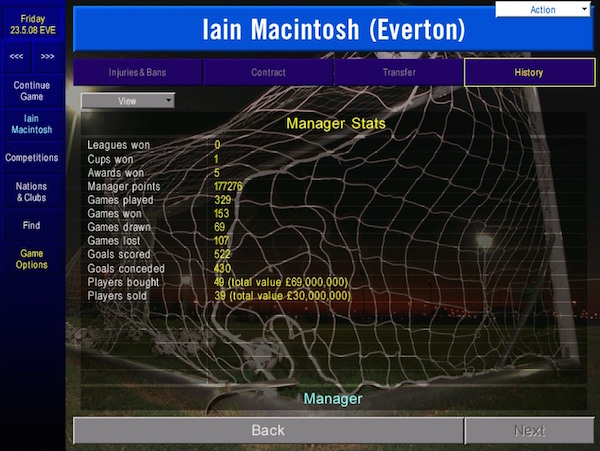 Don’t cry for me. I should be okay. I’m ranked fifth in the country and a slightly disappointing 92nd in the world. But I’m still young and I have a very positive record if you don’t look too closely at the middle of my career and that awkward period where I started having visions of Howard Kendall. 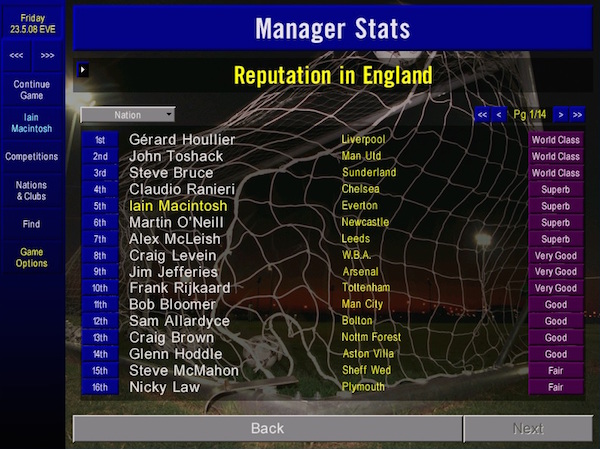 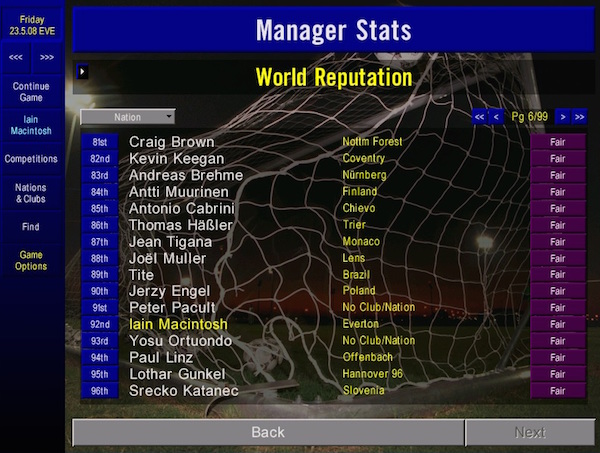 But it wasn’t just the cup final that forced my hand. It was time to go. Oh, it was time. Seven long seasons at the helm have taken their toll on me. I was 37 when I started this project. Now I’m 38. Where does the time go? It might have been different if I’d ever been able to build anything properly, but the club were never interested in improving the actual structure of the club. With ‘awful’ training facilities, there was never any point in developing young players. There was never any sense that I was building something that might outlive me. Every summer was just a desperate bid to glue on new players and hope that it all worked out. 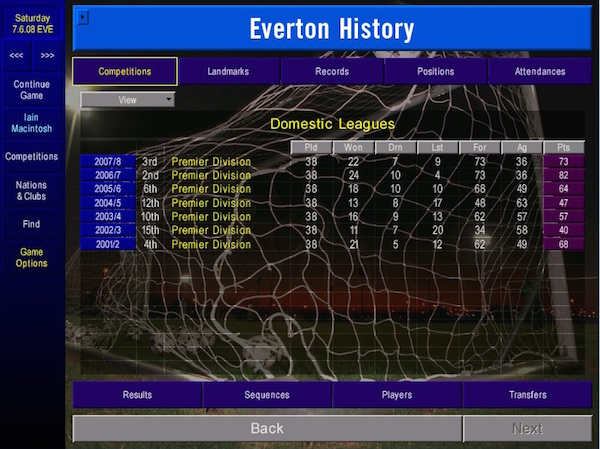 I am proud to say that it *did* usually work out. Sure, we had our slips and our stumbles, but over those seven seasons we lifted ourselves from an absolute basket case of a football club into a contender. And we won a League Cup, let’s not forget that. But it’s not really about the trophies and the glamour, is it? It’s about the friends you make along the way. And it’s so hard to say goodbye to some of those friends. Richard Wright, my goalkeeper throughout those seven years. Li Tie, who never complained and never let me down. Sweet , sweet Gabriel Milito, whose arrival heralded a new dawn of not-quite-success. The Greek Lad. Moving on will be so hard, but it’s for the best. It’s for the best. 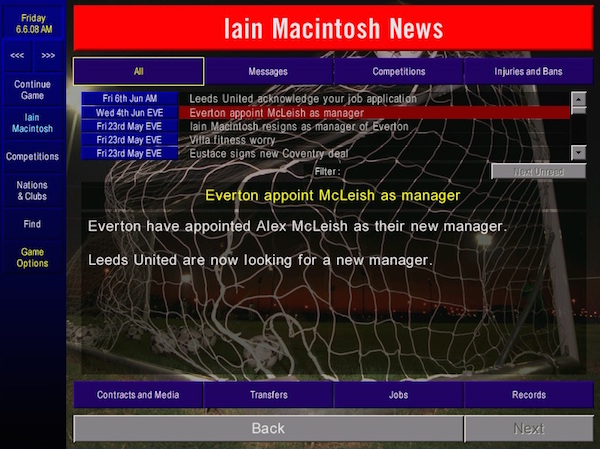 Everton replace me within the fortnight. Alex McLeish is lured in from Leeds United. He likes to play 4-4-2 and I’ve left him barely any players capable of going on the flank, so good luck with that. Mind you, it does leave an interesting vacancy over at Elland Road. Under the watchful eye of Peter Ridsdale, Leeds have become one of the richest clubs in the country. They have a 40,000-seater stadium, outstanding facilities and the ability to pay their players as much as £80,000 a week. I never paid anyone more than £40,000. I stick my CV in the post. 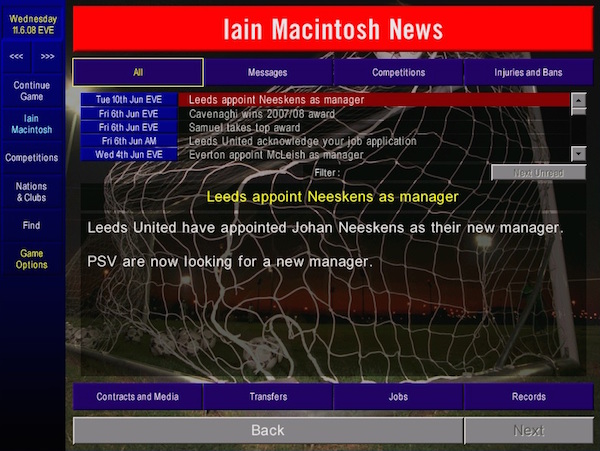 You know, I have never liked Leeds. They may have money, but the game isn’t just about money. It’s style and glory too. I wish Johan Neeskens all the best of luck, but I never fancied it. Mind you, it does leave an interesting vacancy over at the Philips Stadion. They have a 41,000-seater stadium, outstanding facilities and not an awful lot of money. I stick my CV in the post. 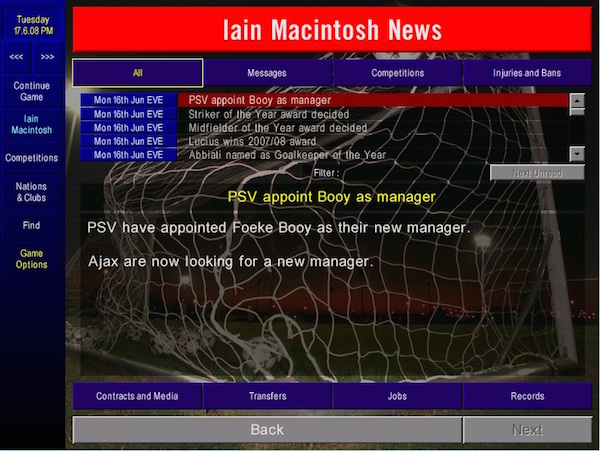 You know, I have never really considered PSV Eindhoven to be the biggest team in the Eredivisie. I wish Foeke Booy the best of luck, but I didn’t really fancy this job either. Mind you, it does leave an interesting vacancy over at the Amsterdam ArenA. They have a 51,000-seater stadium, outstanding facilities and they might enjoy a dramatic change of ideology. And Frank Rijkaard has just been given the heave-ho from Tottenham, so I’ll give them a bell too. 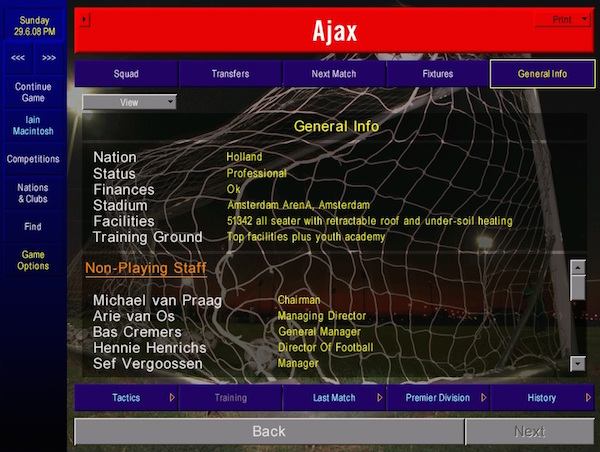 Ajax don’t even tell me when they hire Sef Vergossen. Not even a letter saying that they’ll keep my CV on file in case any other positions become available. Wankers. I hope someone hires me soon. Doing punditry with the lads on ITV’s coverage of Euro 2008 is all well and good, but I need to make a living. England’s dignified quarter-final exit to Spain on penalties means that I can’t even do that job. 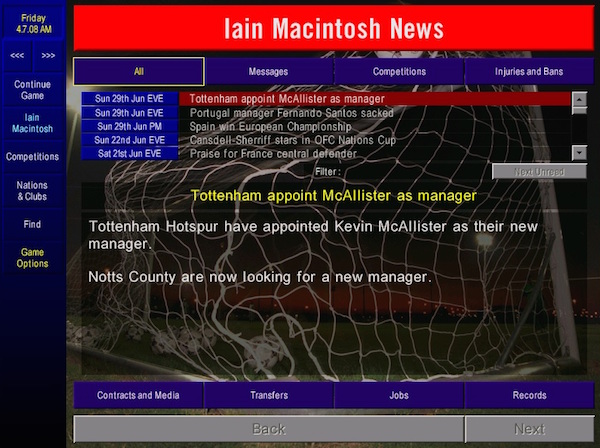 This is just humiliating. I was the fifth highest rated manager in the country. I’ve finished in the top three in the Premier League for the last two seasons. I’ve taken Everton to two cup finals in two seasons. Surely, I’d get the nod over the manager of fucking Notts County? But, no. This is how far I have fallen. I am, it seems, unemployable.

The rest of the summer passes quickly. Players are signed, players are sold, managers make speeches about expectations and journalists make predictions that they sincerely hope no-one remembers in nine months’ time. But no-one offers me a job.

When the season starts, I find myself on my sofa in my pants, phone in one hand, tin of lager in the other, watching Jeff and the boys. After all I’ve done in my career. Unbelievable.