It seems funny to think it now, given how bad things were earlier in the year, but this could turn out to be one of our best seasons ever. Back in the darker months, we were hovering above the relegation zone, half the players had lost confidence in me and I couldn’t buy a win. Now we’ve got an evens chance of finishing fourth and we’re two wins away from an FA Cup Final. That’s not bad, considering that we never have anywhere near the resources of the other big clubs. But there’s still time for it to all go horribly wrong. Let’s not forget that we’ve also got an evens chance of not finishing fourth, a slight chance of finishing outside the top eight and we’re really only one defeat away from FA Cup ignominy.

But before any of that, we have to play Liverpool. Our record against Liverpool is well known. We have only ever beaten them once and this is the seventh season of the project. They always have more money than us, they always buy better players than us and, no matter how badly they start, they almost always finish above us. But we beat them at the Kings Dock last season and we finished above them last season, so maybe the balance of power is finally shifting. But for how long? Matteo Brighi is injured and so too is the Greek lad. I know that Richard Rufus will never let me down at the back, but who do I play alongside the assist-monster (14 so far) David Bryan? It’s a choice between Li Tie, defensively minded but utterly loyal, or David Pizarro, who hates my face. I go with what I know and stick Li Tie in the team. 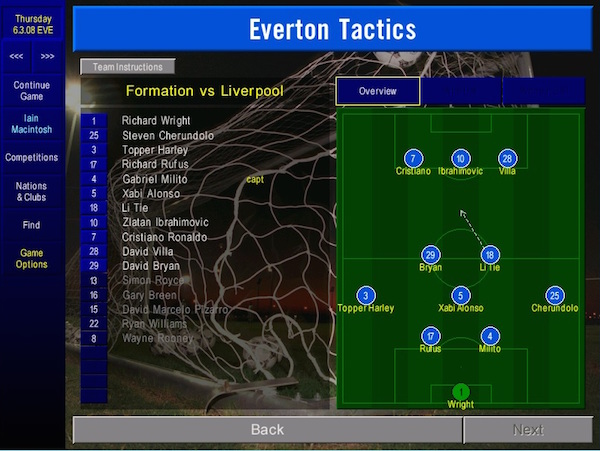 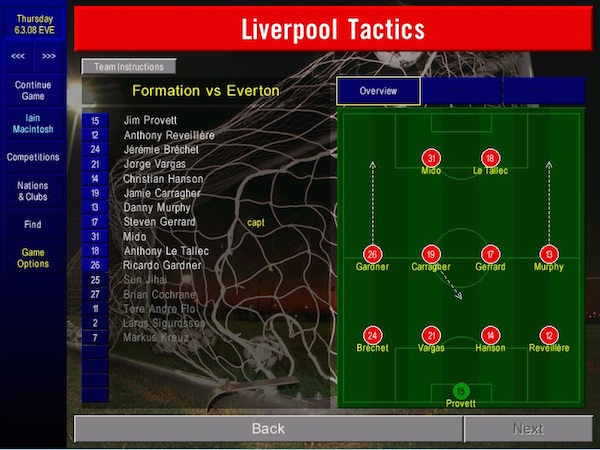 Oh, happy day. Not only do we win, not only do we win well, but we win with such comfort that I can start pulling off my best players before full time. And all we get at Manchester City is an orange and a cup of tea etc, etc.

David Villa opens the scoring early, his tenth of the season in all competitions, a rate which is now somewhere in the vicinity of respectable. We don’t hold onto the lead for too long because Liverpool spent £12m on Mido a couple of years ago and he’s always good for a header or two.

Poor Li Tie is doing his best in the middle, but it’s a role to which he’s not really suited and so at half-time, I bring David Pizarro back into the fold. “Get out there and do your best, son. I hope you can score for us,” I say to him as we leave the dressing room. “I hope you contract a terminal disease,” he sneers and spits on my shoe. It’s early days. But our fractured relationship doesn’t affect his professionalism. He scores within two minutes of the restart and then Ronaldo adds another. Liverpool have been bested and we’re now just a point behind in the chase for third place and automatic Champions League group stage qualification. 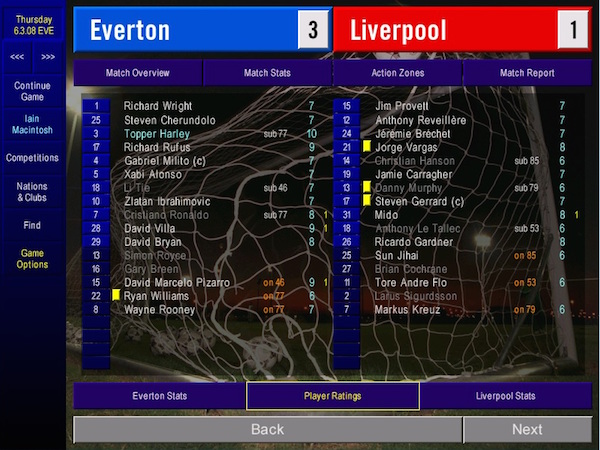 That’s four straight wins in the league now, with 16 goals scored, but the board are still harping on about our dreadful league form. I’m starting to get a very bad feeling about this. I’m sure an FA Cup win will cheer them up though. Everyone likes a trip to Wembley. There’s just the small matter of Cardiff City to deal with first. Brighi is back. The Greek Lad is back. We are officially full strength. Fully armed and operational. Lock and load. Eyes open, guns up. And various other lip-stiffening sorts of words. 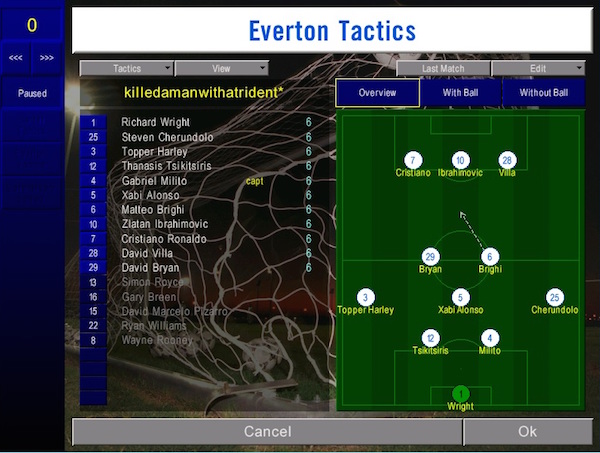 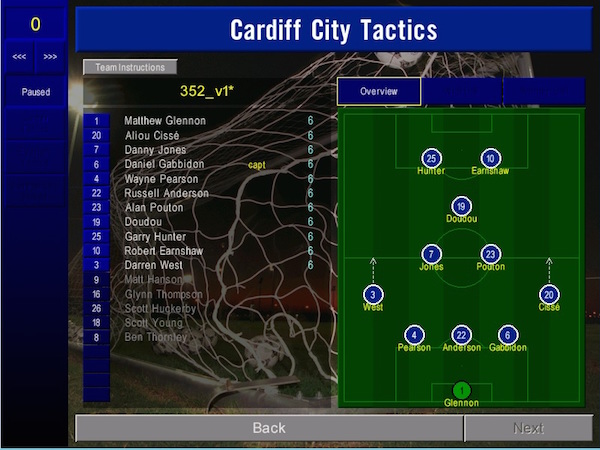 That was as straight-forward as you could ever hope a cup tie to be. Ronaldo scored early. Ronaldo scored again before half time, Cardiff barely threatened after the first hour. We are into the semi-finals, where we will play Millwall, currently one point above the drop zone in the second division. 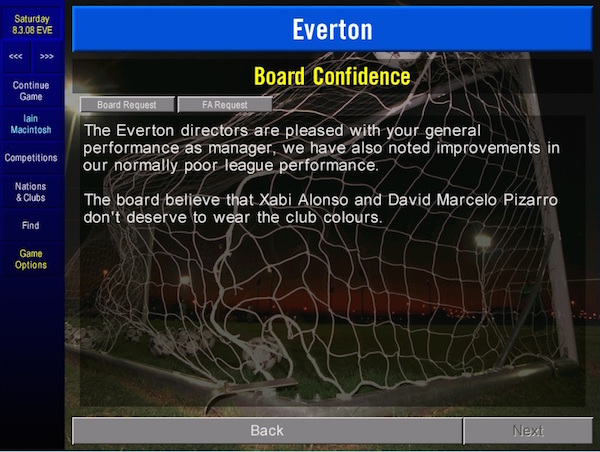 Even more importantly, the board have finally cheered up. I believe this season may have been the equivalent of bungee-jumping with a line that stretches to within two inches of the pavement and survival is really just a matter of whether or not you had a poo before you jumped. We pooed. 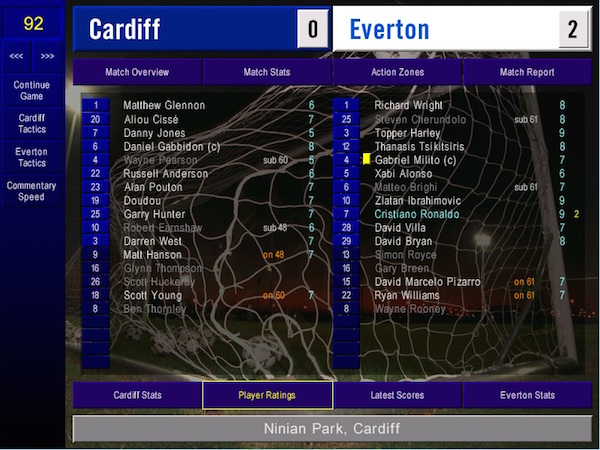 Thiago Motta has gone. We’ve take a big financial hit on this, but at least his £27,000 wage bill is finally off the books. It never really worked out for him here, not least because he suddenly decided he was a striker when I really just wanted him to be a deep-lying midfielder. Never mind. I hope it works out for him at Craven Cottage. 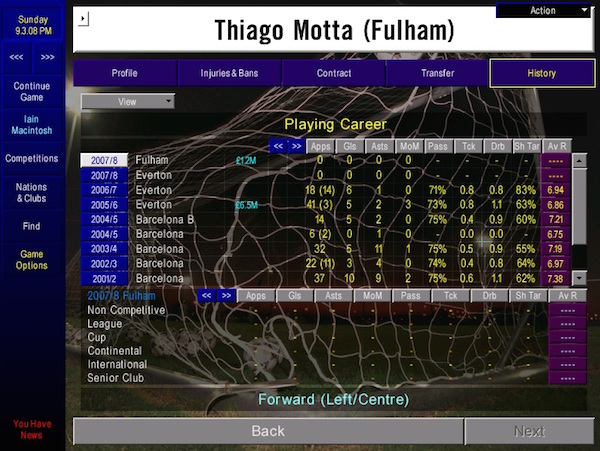 And you’ll never guess where we’re off to now. Yes, it’s Craven Cottage and Fulham. It would have been nice to invoke one of those gentleman’s agreements to prevent Motta from playing, but you know what? If he wasn’t good enough to play for us, I don’t see why I should worry about him playing against me. This team, with its micromanaged targetman/freeman/paceman trident attack, is picking itself right now. The only way Motta would have got a game for us would have been if the team bus had fallen through a wormhole and blinked out of our existence.

I think we’ll be fine. We’ve lost Zlatan to an arm injury though. So we’ll have to give Cherno Samba another go. He’s an enigma, is our Cherno. We know he’s good, we know that he can do it, but it just hasn’t happened. I wish I could just get him in a room, sit him down and talk to him. Find a way to unlock his magic. But I guess the only person who can help Cherno is Cherno himself. 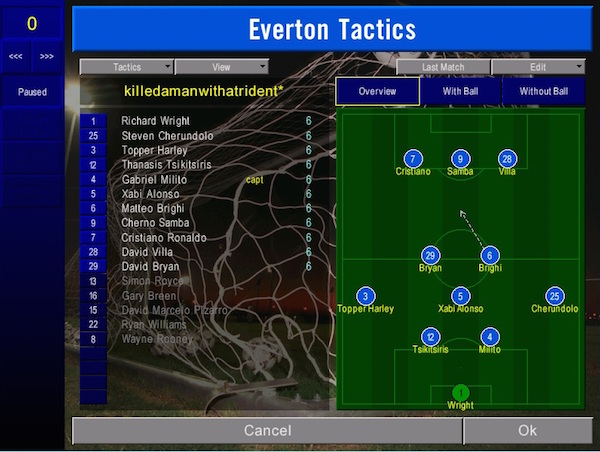 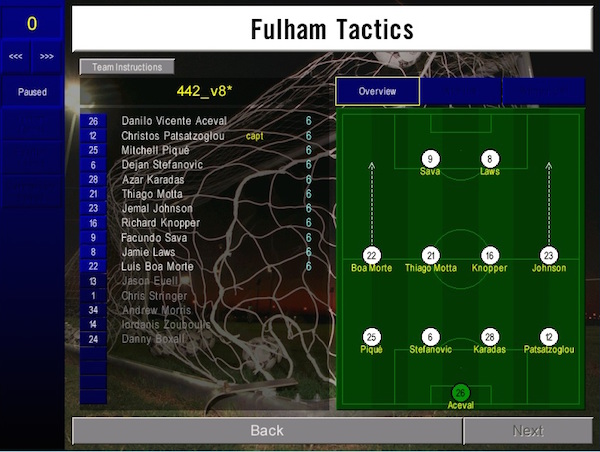 Cherno helped Cherno! He scored what was only his third league goal of the season inside the first half an hour and then led the line like he’d been doing it all of his life, winning knockdowns and dominating the Fulham defence. As for Motta, he gave a solid performance as one of a central midfield two, which is pretty much all I ever asked for him at Everton. Foolish boy. But enough about him. We’re up into third place. We’re a whole 20 points off the leaders, reassuringly musky John Toshack’s Manchester United, so let’s not get too excited, but it’s nice, isn’t it? 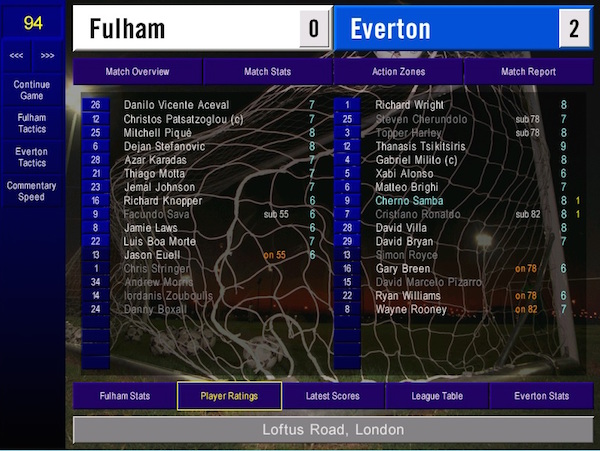 And so we close out the month with the visit of Coventry, a mostly crap collection of journeyman and chances who nevertheless have something of a hold on me. We’ve only lost twice in six meetings, but it feels like far more. Coventry used to do this in real life, back in the day. They’d just hang around quietly, occasionally humiliating teams when they least expected it. Now they’re doing it to me.

Cherno was brilliant against Fulham, but Zlatan is fit now and I don’t want to upset the balance of this team. The big Swede is our second highest goalscorer, despite the fact that he’s only played half a season. I have to stick with him, in spite of that man of the match display from Cherno. These are the hardest decisions of all. 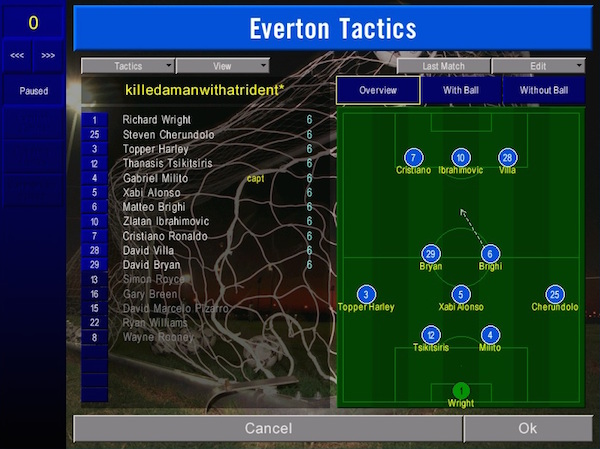 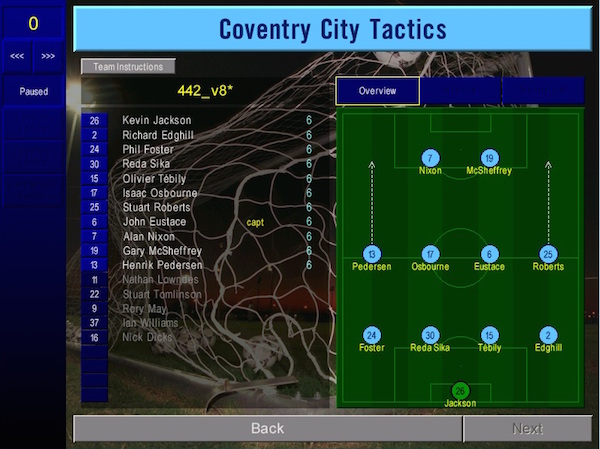 Yes, well…I probably didn’t have to worry too much after all. An absolutely barnstorming start, particularly from Gabriel Milito, produced four goals inside the first half hour. As has happened so often this season, I left the team to attack in the hope that we might do something astonishing, but the goals dried up and then Coventry ruined a nice run of clean sheets by grabbing one back in the last minute. 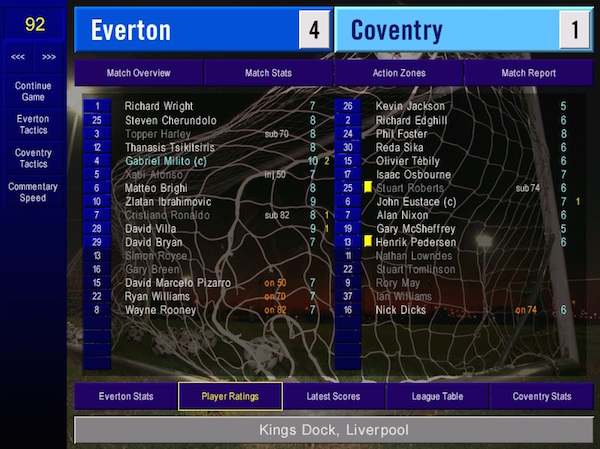 But any irritation at that evaporated when I saw that Liverpool had been beaten by Manchester United. It means that Toshack could wrap up the title next week, which is nice because of the way he smells, but it also puts us four points ahead of Ged Houllier’s hoofball merchants. And with only seven games to go. If we can hold onto that lead, I’ll be very happy indeed. But before we play April’s league games, we’ve got an FA Cup semi-final to look forward to… 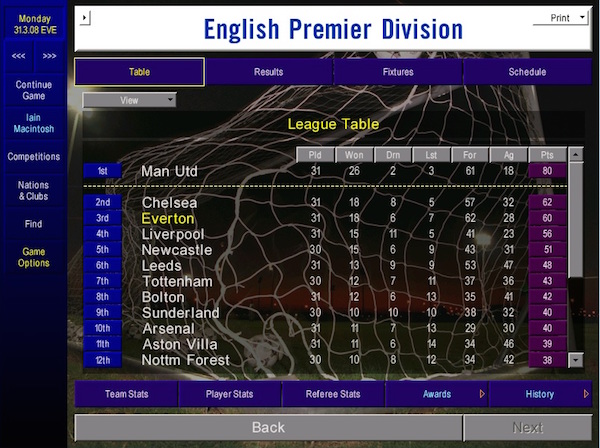 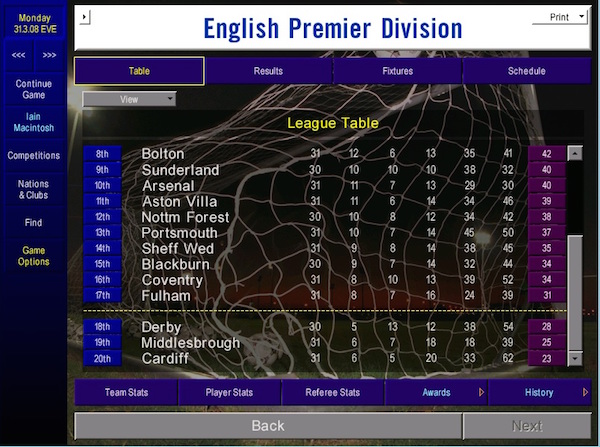