@thesetpieces Chose to come home and watch this rather than pick up the wife's prescription. Don't let her death be in vain!

On this day, not only the fate of the FA Cup is at stake but the bragging rights in Liverpool too. G'luck @iainmacintosh and @thesetpieces !

I wake up early. Very early. Three in the morning. The cat has eaten a giant garden slug and has sicked it up on my bedroom floor. Still mostly intact, its shiny black corpse glistens in a pool of thick orange vomit. I haul myself from the bed, fetch a sandwich bag, a wad of kitchen towel and some disinfectant. In the moonlight, I get down on my hands on knees and do what has to be done. From the doorway, the cat watches me as I toil, a look of total contempt upon her face. Looking back, I really should have taken this as some sort of omen for what was to follow…

Obviously, we’re all desperate to get on with the cup final, but there is the small matter of the Premier League to finish first. Ordinarily, on the weekend before a cup final, I’d drop all my key players and put the kids out. The risk of losing someone to injury is just too great. But we can’t do that. Although we’re guaranteed a top four finish, I don’t want to have to go through the qualifying rounds to reach the Champions League group stage. A win here will guarantee third. So with that in mind, this is very nearly a full strength side. Very nearly, because I’m going to give 45 minutes to Cherno Samba and 45 minutes to Zlatan Ibrahimovic. And, you know, the Greek lad is still suspended. Let’s do this and let’s get in the right frame of mind for the final. 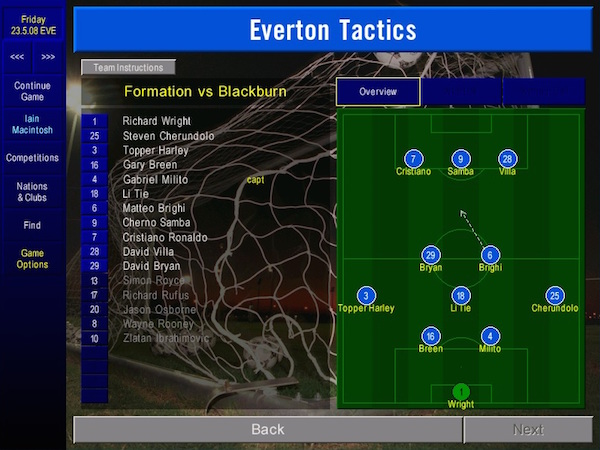 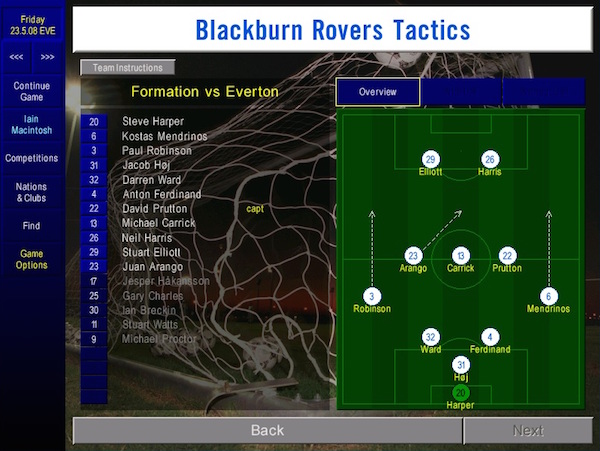 That was lovely. Absolutely perfect. After a dominant first 40 minutes, Cristiano Ronaldo opened the scoring and we never looked back. Another goal for David Villa sealed a result that, to be perfectly honest, was never in any doubt. Across the board, it was a fine performance, composed and effective. Samba made Ronaldo’s goal and was so impressive that I left him on a little longer than I planned, replacing him midway through the second half with Zlatan, who held the ball up nicely when I shut the game down… So there’s a decision to be made about who starts in the cup final. 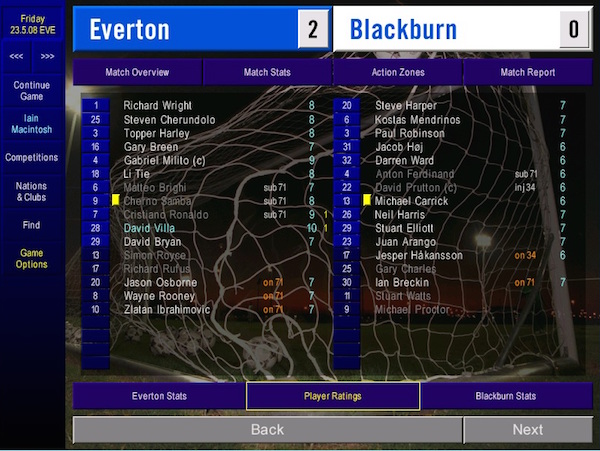 The players are fit and confident, their morale is high and I was even able to withdraw Ronaldo and Matteo Brighi towards the end to ensure that they’ll be 100% for Wembley. Better still, our victory ensures at least a third place finish. Better than that even, Liverpool dropped two points away at Sheffield Wednesday and El Hadji Diouf, who has been weirdly impressive for them, did his hamstring.

Unfortunately, Chelsea beat Nottingham Forest which means that, while third place at least is certain, second place is almost beyond us. If we win away at Forest next week and Ranieri’s side are beaten by a Manchester United side likely to be playing in flip-flops, then our superior goal difference will give us the runners-up spot, but that does seem a little unlikely. Besides, given the way we started the season, we should be absolutely over the moon just to get on the bleeding podium.

But enough of that. It is time for Wembley. And it’s an absolute honour to welcome the real Cherno Samba into the office as my new assistant manager. I am convinced that Cherno’s experience in the game will be an asset to Everton Football Club as we prepare for this, the biggest game in my career.

Now, I don’t employ yes-men. I don’t see the point. If I want someone to stay quiet and accept my decisions, I’ll bring my cat into work. I want to be challenged. I want my assistant to say what he thinks. But we’ve got an immediate problem. Real Cherno Samba is adamant that Computer Cherno Samba should start ahead of Zlatan.

It’s not completely out of the question. Granted, Computer Cherno has only scored five goals in all competitions, but he’s been improving a lot recently and impressed in the last match. I’m not comfortable with the idea of dropping Zlatan, but Real Cherno is insistent. And, to be fair to him, he has come all the way up the Northern Line for this. What sort of employer would I be if I ignored my new number two’s first major call? Zlatan sits on the bench. Wayne Rooney isn’t even granted that honour. He’s left out of the squad altogether in favour of Ryan Williams. But I’m still confident. Man for man, we’re a better team than Liverpool. All we have to do is show up and prove it. 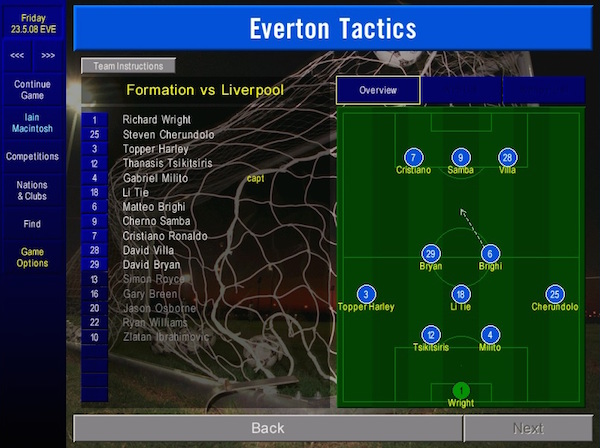 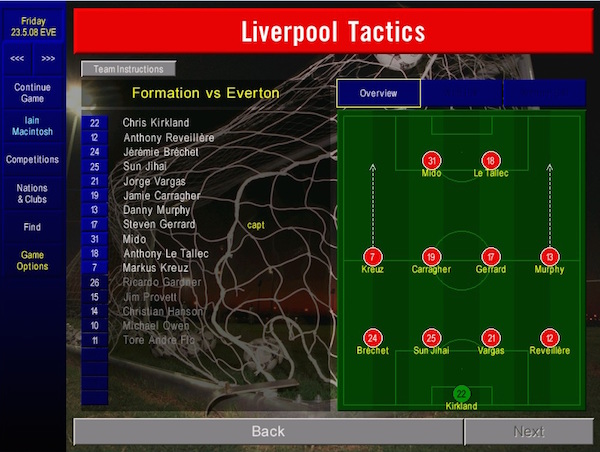 We didn’t show up. We just didn’t show up. Of all the days to put in a completely substandard performance, we chose this one. We haven’t played that badly since those dark days at the beginning of the season. There are no positives. None at all. I feel as sick as a cat. 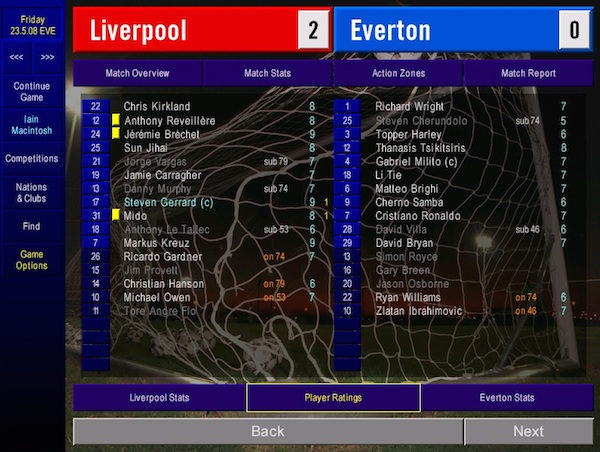 You can watch the game in full, every hideous misstep, in this specially produced livestream. I haven’t watched it. I will never watch it.

So where does the blame lie? Does it lie with Richard Wright? Liverpool had four shots on target and scored with two of them, first through Steven Gerrard in their first attack of the game, then with a Mido header ten minutes before half-time.

Do we blame the full-backs, both of whom flopped horribly, winning just one tackle all game between them? Do we blame Gabriel Milito, who won barely half of his tackles and headers? We don’t blame the Greek lad, he had a stormer. But what about Li Tie, whose passing accuracy was less than 60%? What about Matteo Brighi and David Bryan, who were shadows of themselves? What about Pretend Cherno, who a won only a single header all day? What about David Villa, who was barely there? And what about Real Cherno, whose advice would backfire so horribly? No. No, the blame does not lie with any of them.

The blame lies with me. I am the manager of Everton Football Club. I take responsibility for the team and for their performances. I clicked the mouse. I changed the team. I upset the applecart.

@thesetpieces @iainmacintosh terrible waste of annual leave/flexi that. Will be working some long shifts next week to make up my hours.

@TMortimerFtbl @thesetpieces That's what you get for letting Tony Hibbert go.

The board are unhappy, the fans are unhappy and you’re unhappy. And I understand that. I accept that. A Wembley final and a top three finish hardly constitutes evidence of a failing football club, but it doesn’t feel that way now. I’ve let you down. I’ve let Everton Football Club down. But most of all, I’ve let myself down. 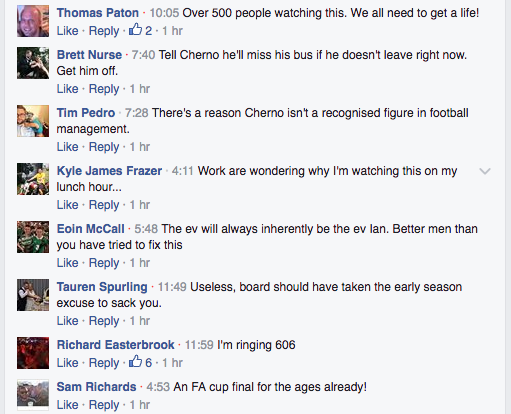 I want to go away. Far away. Somewhere no-one recognises me. Where no-one can see me hurting. But the season isn’t over yet. And so, with heavy heart, we must complete our final fixture. This time, Zlatan starts. 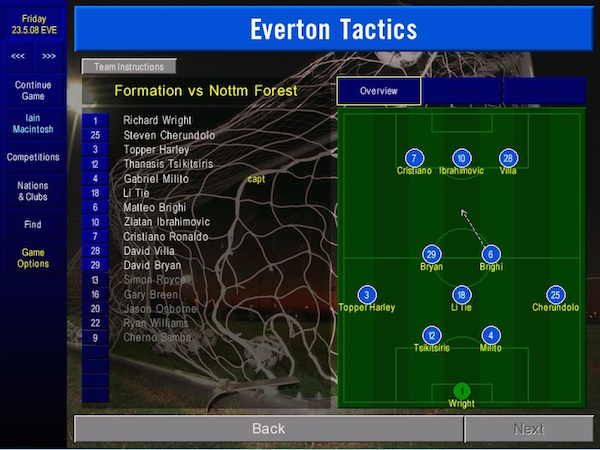 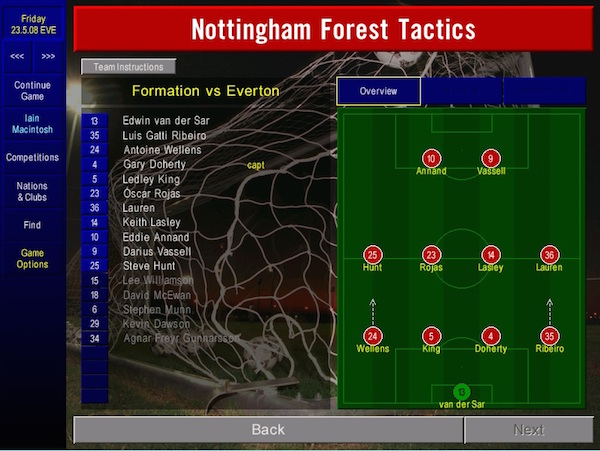 A disaster. We go behind, we lose Richard Wright to a first half red card, we lose the game to three goals by a 35-year-old Scottish striker. Entirely to be expected, of course. Morale is rock bottom. In the dressing room and in the dug-out. And in the boardroom and in the city. This is a low. A new low. And I didn’t think there were many more of those to be experienced. 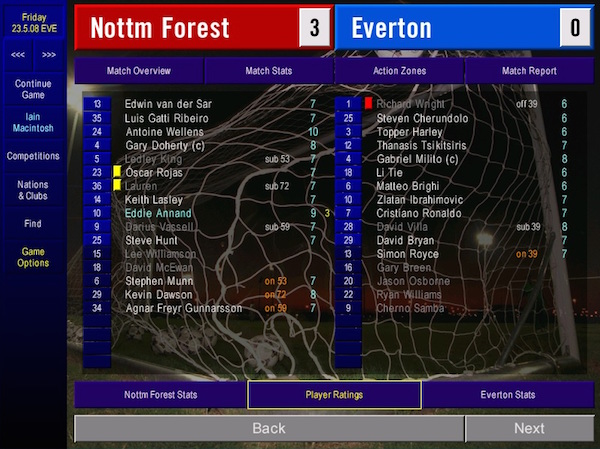 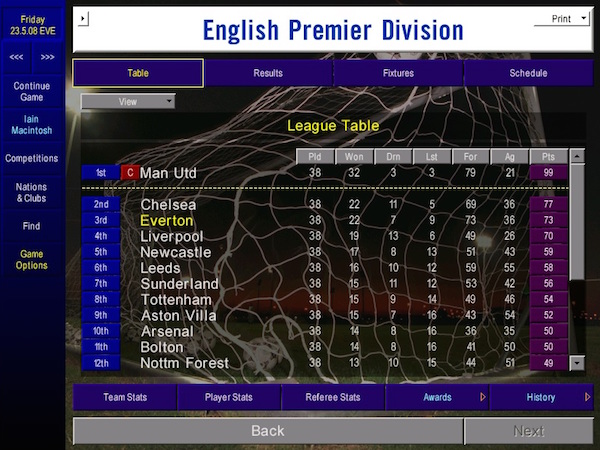 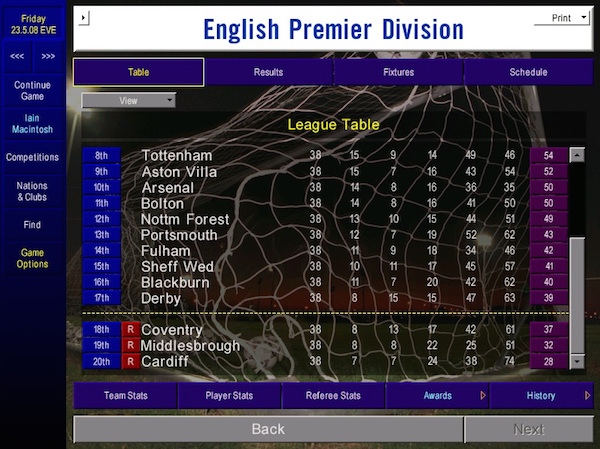 I stand up and I straighten the flower in my lapel. It too has wilted in the Wembley heat. My footsteps echo off the walls of this vast dressing room. I stand in the doorway for a moment and look back. All those memories. All those dreams we shared together. I know what I have to do now.

I switch out the light and I walk away.

“My work here is done.” Great to have Cherno Samba in the office today for the FA Cup final in CM01/02 ⚽️?