For the first game of the month, we’re on the road again. The longest road, in fact. We’re away at Sunderland, up against “world class” manager Steve Bruce and his Pablo Aimar-infused Black Cats. Now, we coped with Sheffield Wednesday’s similar formation very well last week, but there’s a key difference here. Sunderland are really good. They’ve got Matty Piper.

We’ll be doing the same complicated man-marking job on this lot. But they also have a young goalkeeper with a textbook regen name, so rest assured, we’ll be shooting on sight when we come up against 21-year-old Ashley Terry. It’s nice to catch up with my old mucker Thomas Gravesen too. He’s 32 now and he’s still playing well. I wish him all the best. My old defender Li Weifeng is playing for Sunderland too, but he’s a treacherous, Bosman-invoking shit and I hope he breaks his leg. 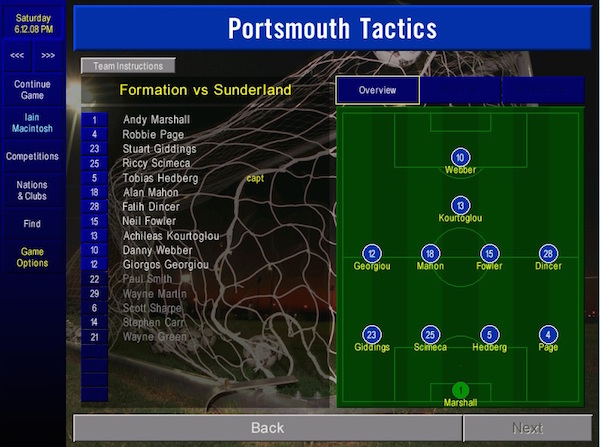 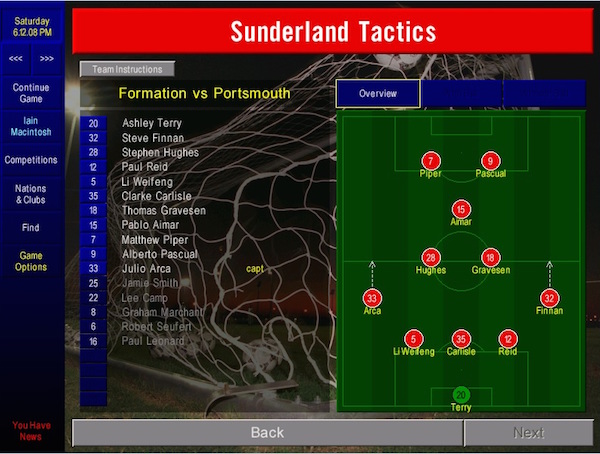 After 15 minutes, Sunderland have had nine shots, seven of which have been on target. So that’s not good. Somehow, it’s still 0-0, but I’m old enough to know a hint when I see one. We scrap the Plan A and move to Plan B, a brutal 4-5-1, defensive and using the counter attack. They eventually make the breakthrough on the half hour. It’s Li Weifeng, the shit. Piper adds another before the break too. We’re terrible in every department.

Neil Fowler’s only job is to sit on Pablo Aimar, but at half time he hasn’t won a single tackle or header. Robbie Page is only 18, but I shift him to the defensive midfield role and welcome Stephen Carr back from injury to replace him at right-back. Page has only marginally better luck with Aimar, but he does at least crash home a consolation goal towards the end. Riccy Scimeca is withdrawn midway through the second half and I don’t think he’ll be long for this football club. He’s offered me nothing. Moves for a new goalkeeper and a new striker are advanced, but if this game has proved anything it’s that we need a new centre-back and a new midfielder too. And possibly a winger. 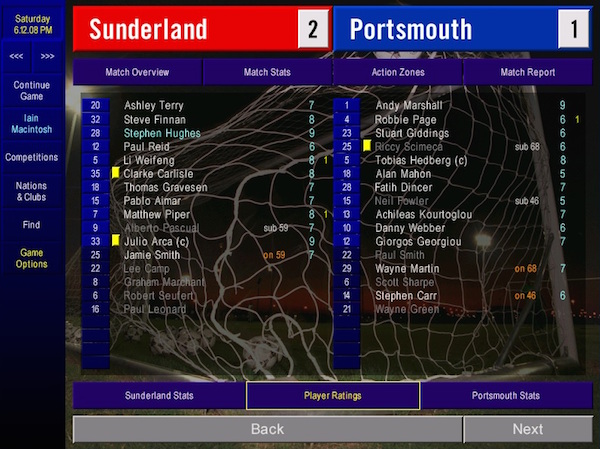 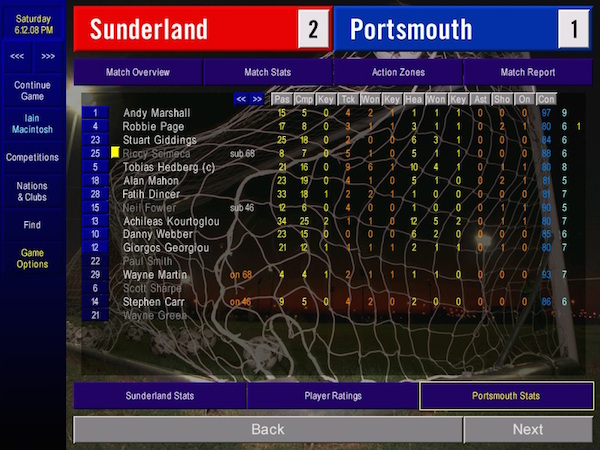 We definitely need a winger. Giorgos Georgiou’s contract is expiring and Newcastle have made a move. I try again to keep him, but he’s not interested. We’ll get £3.2m in compensation, but that’s a heavy blow. He’s one of the few people at this football club who is any good at football. In the meantime, I’m working with the reserves to see what sort of quality we’ve got in the youth ranks. Lee Holmes (technique 19, passing 14) will move up to the senior squad. Paul Wilson (pace 15, finishing 19) looks a decent striker and Darron Radcliffe (tackling 19, strength 20) could be moulded into a very good full back. But all three will take time to develop. And I don’t have much time. I need quick fixes and the first arrives in the form of Adam Thwaites. A utility man who can actually tackle, it’s likely that his team-mates will be a bit baffled at first. 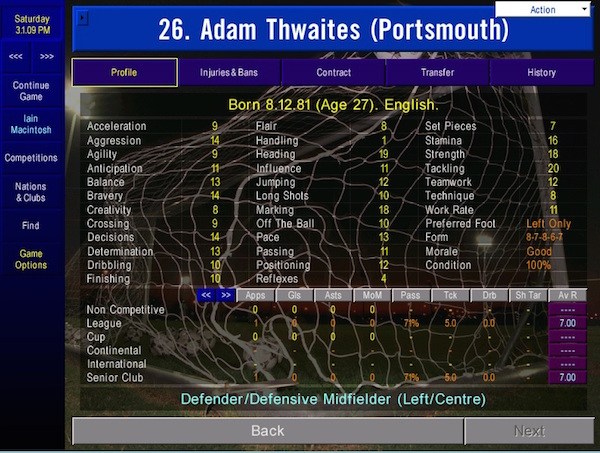 I make my home debut against Fulham, one of the few teams beneath Portsmouth in the league and a side that usually play 4-4-2. Scimeca is out, he’ll sit on the bench as a spare midfielder while Thwaites plays in his place. Alan Mahon can go too, he’s clearly not up for this. He’ll be at Manchester United soon anyway, the deal was finalised before I arrived. Twenty year old academy graduate Lee Holmes makes his debut in the middle. Steven Carr starts at right-back. Hopefully, this will be a better afternoon for us. 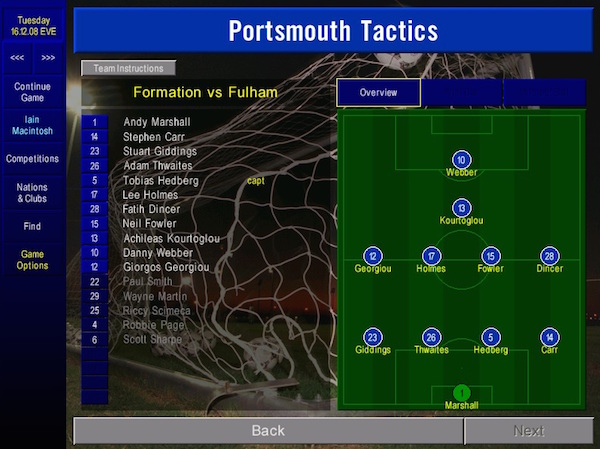 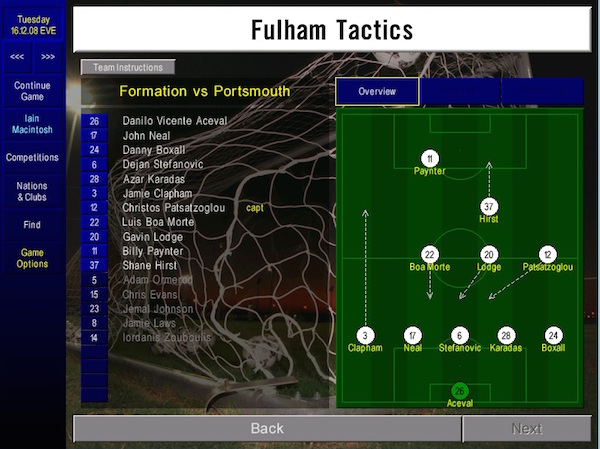 I’ll never miss my old life at Everton with results like this. Fulham went with a very defensive formation and then rocked us back on our heels with an early goal from Dejan Stefanovic. It came in the eleventh minute and it was their first and last shot of any kind in the entire game. Thwaites was decent enough at the back, but picked up an injury that rules him out for the rest of the month. That went well. Holmes had a solid debut. Giorgos Georgiou was brilliant on the left, but it didn’t make any difference. We equalised before the break through Danny Webber and toiled in vain until the final whistle brought an end to our efforts. A 1-1 draw is not what we deserved from this game. But at least we played well. I’d rather draw playing well than playing badly. 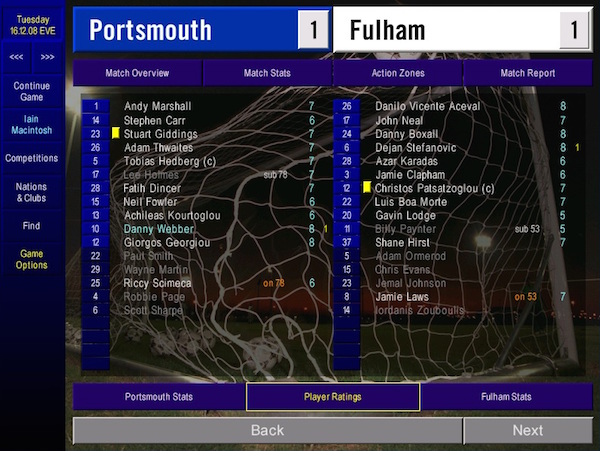 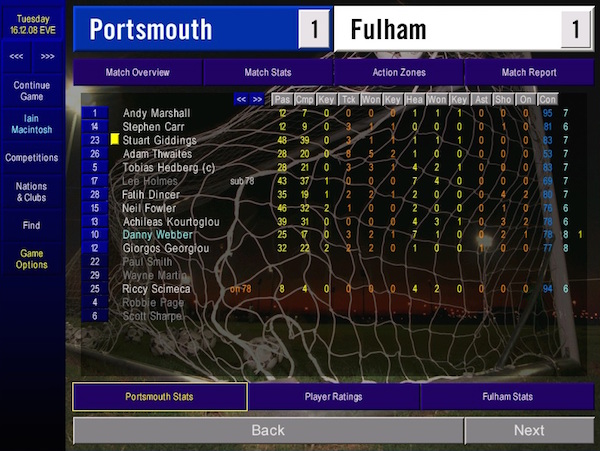 The new players have started to arrive. Ahead of the trip to Blackburn Rovers, we’ve been able to pick up Petr Cech for £1.3m. He’ll go straight into the team along with Danny Gabbidon, who brings some urgently needed pace to the back line. 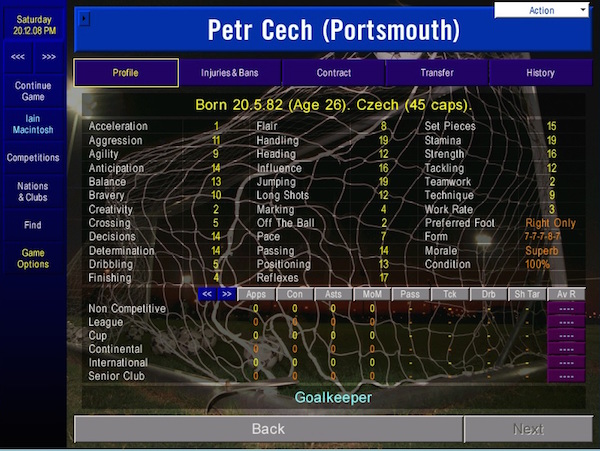 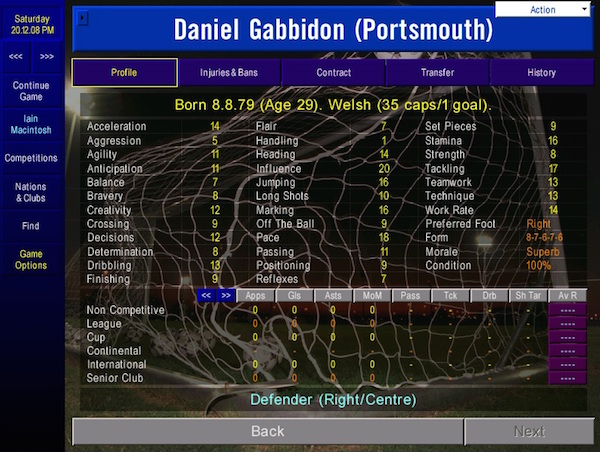 Both new arrivals will play on Saturday and, to combat Blackburn’s unpredictable ways, I’m going to give Riccy Scimica a go in midfield. His contract is running out and I need to make a decision on him. Apart from that, it’s much the same. But we now have bids in for five other players. These are exciting times. 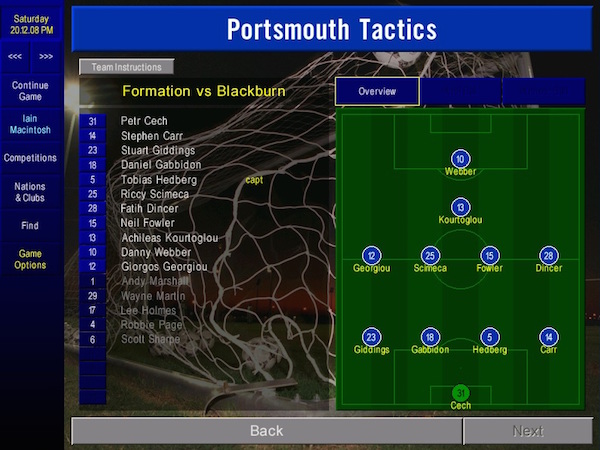 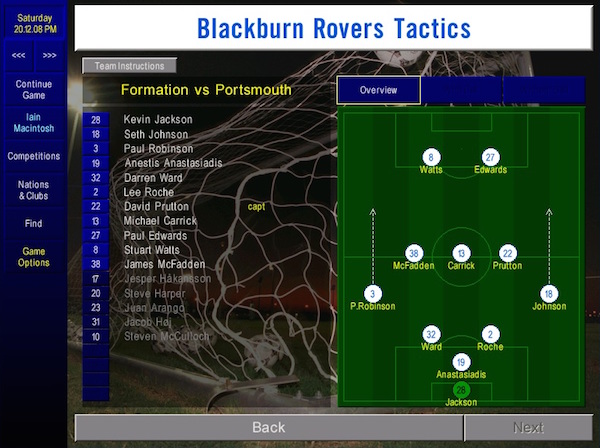 Well, that was certainly exciting. Not necessarily what I would call ‘good’ however. For starters, Cech had an absolute horror show the likes of which even Richard Wright never experienced. Blackburn had five shots and four of them went in.

We might have been able to cope with that, but unacceptable performances across the park made that impossible. The two full backs offered nothing. They didn’t shut down the flanks and they didn’t provide anything in attack. Neil Fowler was wretched. Shit on the ball, shit off the ball. He’s not good enough. Achileas Kouroglou, who got a ’10’ in our first game, barely showed a leg. Throw all of those factors together and you’re going to lose. We need to get more bodies in. 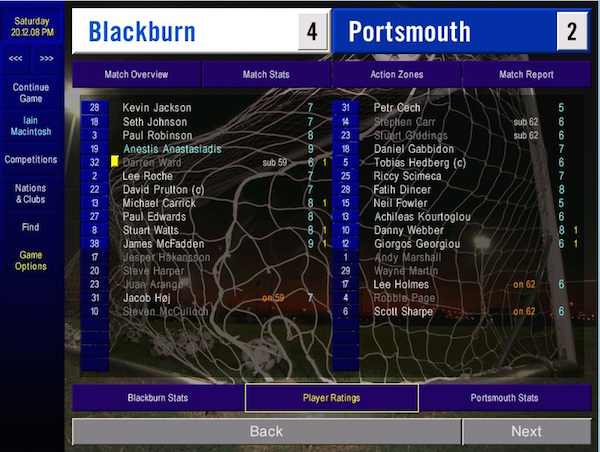 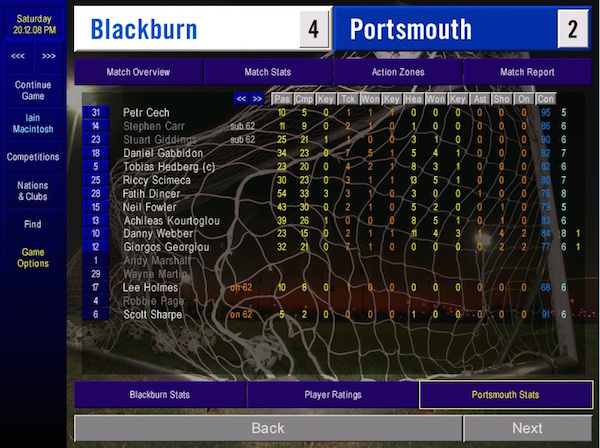 Now here’s a body. And a face too. And all for just short of £7m. Behold, the glorious future of Portsmouth Football Club. If I can just find a solid midfielder then I’ll have laid down a completely new spine for the team. 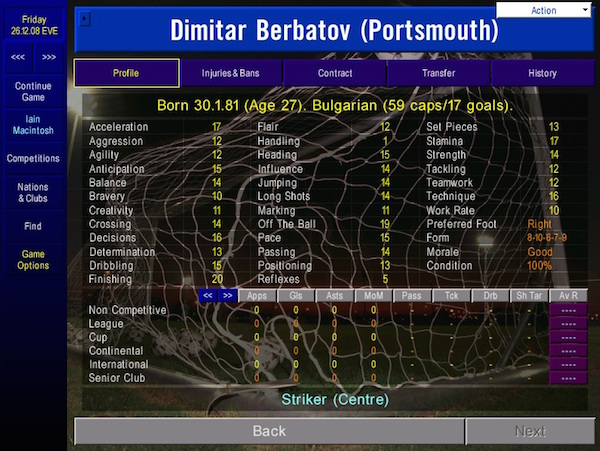 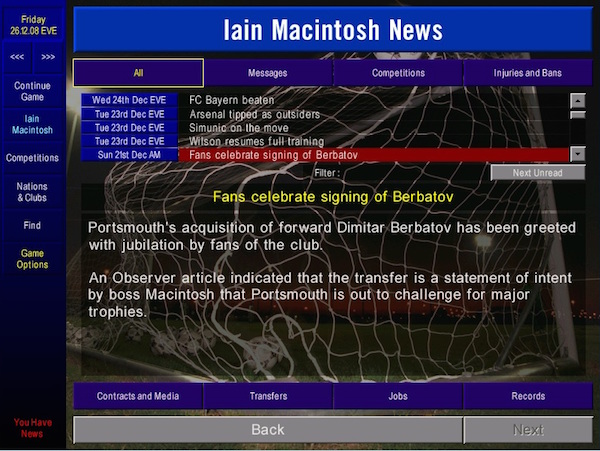 What would be nice now is a home game. A good, winnable home game. Instead, we have to play a fourth away game from my opening five fixtures. And it’s at Manchester United, currently battling away with Sunderland at the top while, regrettably, Alex McLeish’s Everton slide into fourth.

I don’t think we have any chance at all, personally, but it doesn’t seem like a good idea to tell the players that. John Toshack will know it though. He knows everything. But he doesn’t know that I’m going to try to make attack the best form of defence. He doesn’t know that I’ve killed a man with a trident. 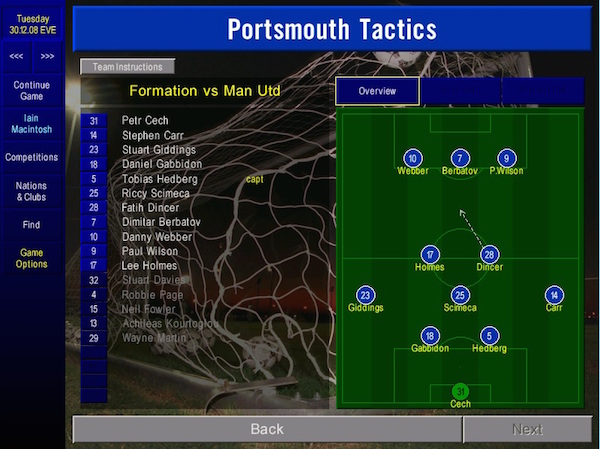 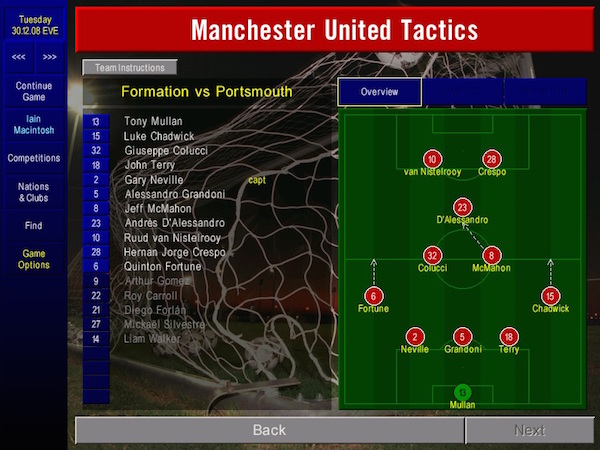 I try to be understanding with my players, but I really do need to have a bit of a conversation with Cech. He’s new here, and so am I, but perhaps he isn’t aware of my expectations. He has now faced eight shots and he’s conceded seven goals. This falls beneath my expectations.

I would also expect Tobias Hedberg to get a little closer to Ruud van Nistelrooy. One successful tackle from five and one successful header from THIRTEEN is even further beneath my expectations. It’s a shame really because apart from that, it wasn’t too bad. Berbatov was a little quiet and Webber was poor, but 20-year-old Paul Wilson, on his full debut, played very well indeed. We got far more out of the full backs in this formation and we made nearly twice as many chances as United. But they had a goalkeeper who can catch and that really was the difference. 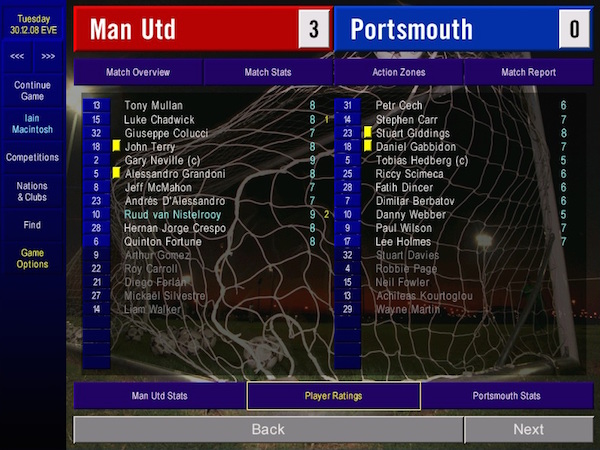 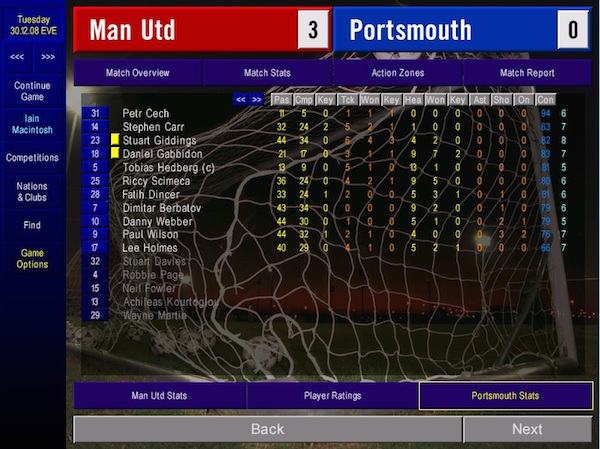 My nemesis, Ged Houllier, has returned. And we are not in great shape. We’re at home, for once. But that’s just about all we’ve got going for us. I can’t even put Andy Marshall back in the team while Cech settles because he’s injured. I have to hope that Hedberg copes better here than he did at Old Trafford. I have to play Neil Fowler again because young Lee Holmes, while being a very talented midfielder, has a stamina of 6 and the midfielders I’m chasing are locked in work permit talks. So we go again. We just pray for a different outcome 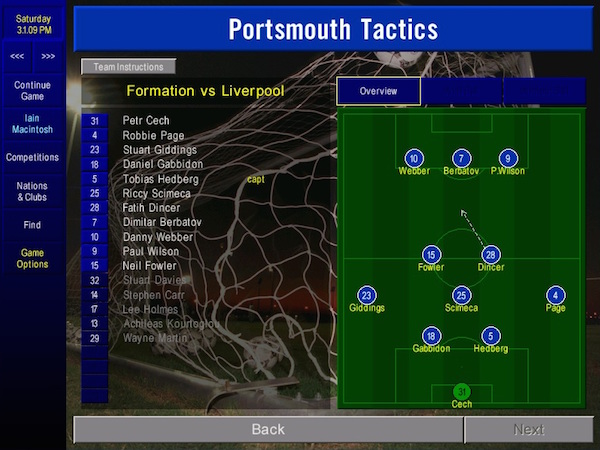 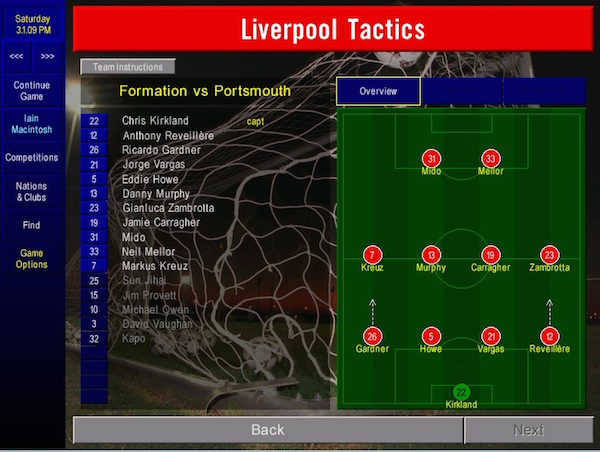 Well, that was better. But still not good enough. Mercifully, Cech actually seems to be settling, albeit while still conceding goals. Once again, the full backs enjoyed themselves in their advanced roles. The defenders did well too. But the midfield was deeply average. There’s no leader like Matteo Brighi, no pass-master like David Bryan. Fowler is terrible, Scimica is average and for a man who wants a move to a bigger club, Fatih Dincer doesn’t seem to have much to make him stand out in the market place. Berbatov hasn’t caught light yet and I’m worried that he didn’t win a single header. But we made a game of it. We’ll settle. Eventually, we’ll settle. 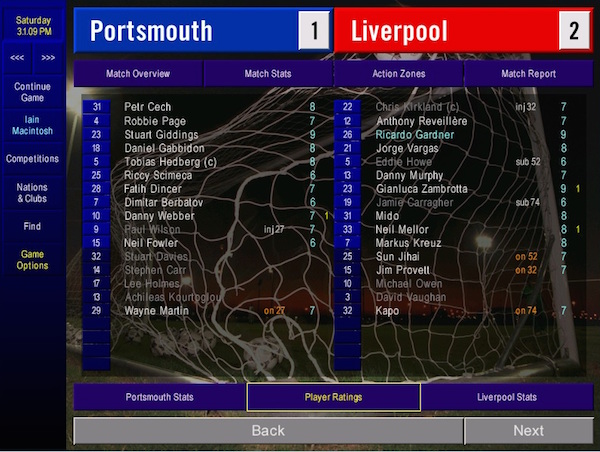 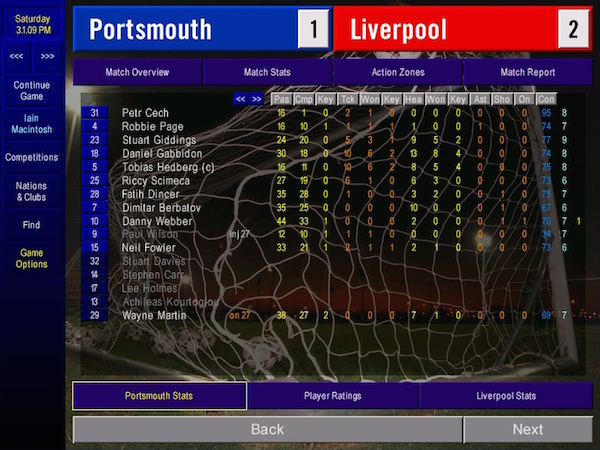 The new faces continue to roll up in reception. Here’s Stefan Moore, fresh from a £3.6m move from Kilmarnock. It’s not the greatest league in the world, admittedly, but those attributes are eye-watering. I have high hopes for that boy. 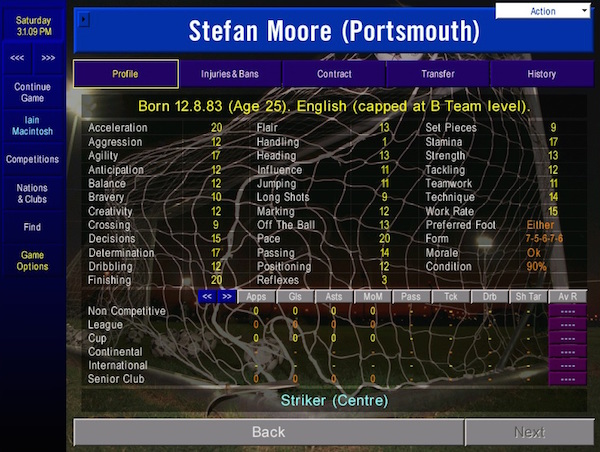 But as 2008 turns to 2009, there’s no way of getting away from the fact that Portsmouth have slipped back into the relegation zone. Having won my first game, I’ve taken just a single point from the next five. But I’m not going to panic. I am bringing in players that are better than the ones already here. I am slowly discovering who can play and who cannot. A formation of sorts is slowly coming together. We will improve, I have no doubt of that. This has only just begun. 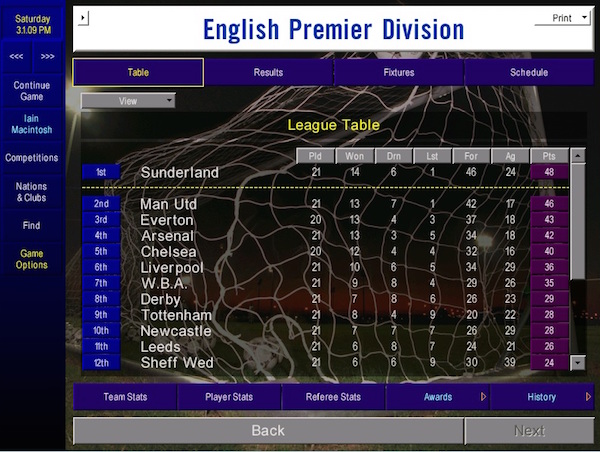 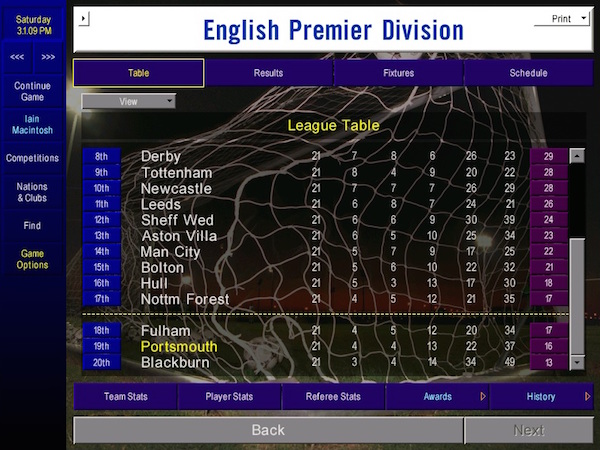