March used to be such a busy month at Everton, especially in the last few seasons when we were always pushing for Champions League football, or chasing domestic silverware. It’s a little different here at Portsmouth. I guess the best bit about life at Fratton Park is that I no longer have to worry about fixture congestion or squad rotation. We have just two games to play and only about 13 players that I’d trust not to piss in their own bathwater. And I’ve recruited most of them myself in the last three months.

Not that it’s helped much. Petr Cech is great now, but his wobbly start cost us crucial points. Stefan Moore has been slow to light up and Dimitar Berbatov has been genuinely awful. He’s supposed to be the pivot for everything, but he’s been offering nothing. And the reaction from February’s efforts suggests that you’re losing patience with this. I don’t blame you.

@thesetpieces @iainmacintosh finally plays his best 4-3-3 formation, wins at Chelsea and changes it for no reason. Loses. Textbook Macintosh

@thesetpieces @iainmacintosh "Look, I know we're bottom and concede 4 goals a game but I feel like we're getting somewhere" pic.twitter.com/dkvgPQaf5W

Allow me to retort. Just because a tactic works well away from home against an excellent team, doesn’t mean that it’s the right one to use at home to mid-table cloggers. We had to go defensive against Chelsea because we’d have been slaughtered otherwise. But why not take the game to West Bromwich Albion? Why not seize control of our destiny? Why not say, “I have spent nearly £20m on this team and I didn’t spend it so that we could hide in our own half tugging each other off.” We may not have much here at Portsmouth, but we’ve got our pride. So, I stand by that tactic and, you know what? I’m going to use it again, away at Manchester City.

City are no good. They play 4-4-2 and you know by now that a trident always pierces a 4-4-2. Our best chance is to hit them hard, get ahead, get a cushion and then Helm’s Deep our way to the end. We’ve got goals in this team. I know that we have. When Berbatov starts firing, when Moore finds his feet, when Webber…well, you never know. I’m happy with the boys at the back. We obviously need more quality at wing back. What I’d give for Danny Senda and Mauro Navas right now. But Adam Thwaites is a vicious bastard and if Gary O’Neil and Achileas Kourtoglou click, I think we’re a decent team. And no, there are no Americans in Baghdad. 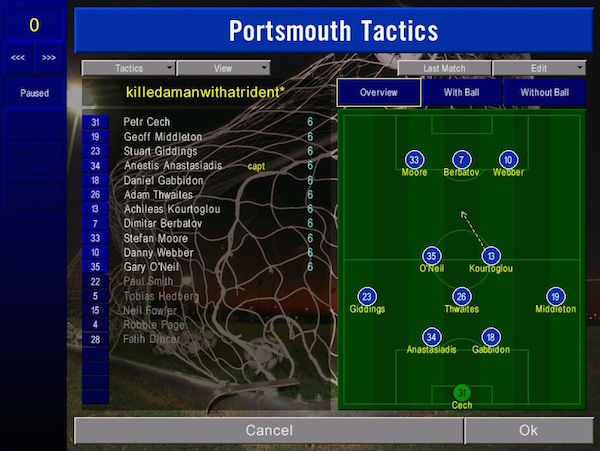 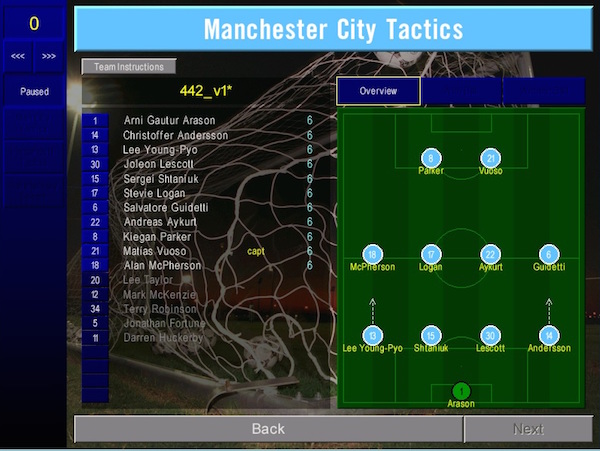 What a performance! I knew that this would work. Right from the start, we were in City’s faces, throwing them off balance, making them panic. Gary O’Neill smashed home a free kick after ten minutes and we followed it up with a volley of chances, with Stefan Moore going close twice, hitting the woodwork and then somehow missing an easy opportunity. City’s full backs, Christoffer Andersson and Lee Young-Pyo were causing a little bit of discomfort, but it was their goalkeeper Arni Gautur Arason, a former nemesis of mine, who was the biggest thorn in my side. 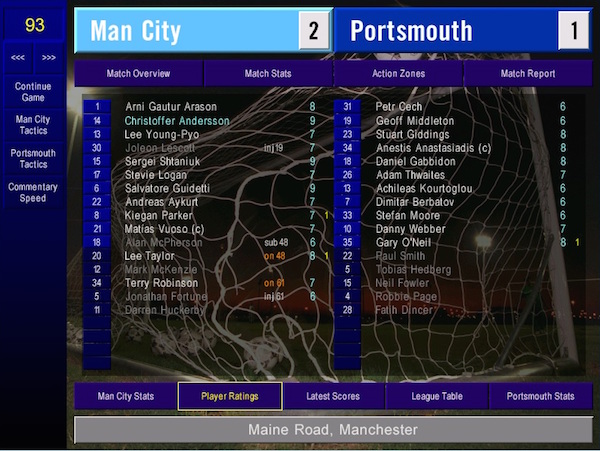 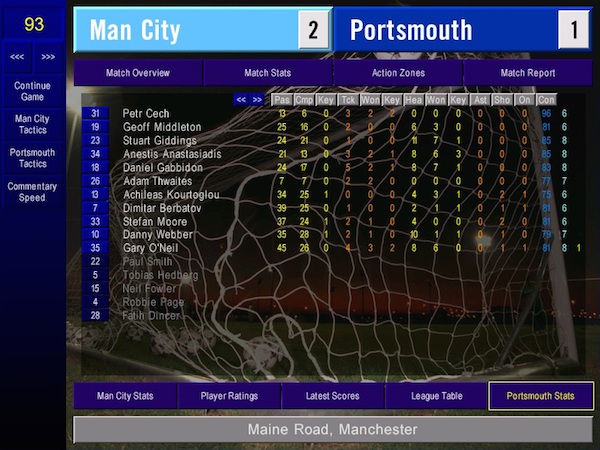 How do you recover from that? I’m serious, someone tell me. Because it’s not just any game coming up now. It’s Everton at home. Yes, I know that I need three points quite desperately in order to avoid relegation, but it’s bigger than that. It’s more important than that. This isn’t just about Portsmouth and the financial apocalypse that awaits them in the event of relegation. This is about my ego.

I walked away from Everton because I felt that I’d taken them as far as I could. I didn’t have the resources to overtake John Toshack’s Manchester United and I probably never would. I didn’t have the facilities to create any kind of progression from the youth team that might enable us to save a bit of cash. I could only make do and mend every summer, knowing that any slight fall back from our regular top four challenge would see me sacked. The club needed fresh ideas and fresh impetus. And yet…

Look, I’m happy in Portsmouth. I’d be happier if we were, say, 9th or something, but it’s been fun. I’ve spent more money here than I ever did in a season at Everton. And yet…

When I see Everton locked in their joyless 4-4-2, when I see them bobbing around outside the top four, when I see them running around signing bog standard regen centre-backs instead of exciting, but volatile South Americans, I get a twinge in my heart. I built that club back up when it was about to fall down. I made it vibrant again. That was my empire.

But if I’ve learned anything from life, it’s that you should never acknowledge painful feelings of loss and regret, you should always bury them deep down where they can’t hurt you. And if those feelings should bubble back up like rising magma, then you must expel them violently in the direction of others, lashing out and laying waste to their hopes and dreams instead of questioning your commitment to your own. And the best way to prove to Everton that I’ve moved on and that I don’t think about them first thing in the morning and last thing at night is to kick them in the testicles so hard that they are sick and then to bend them over and rub their face in their own vomit. 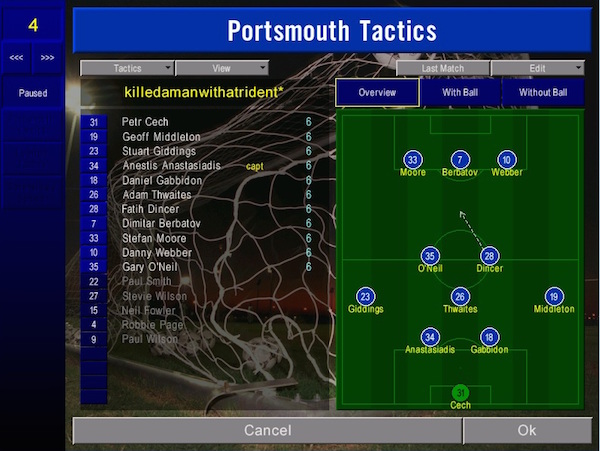 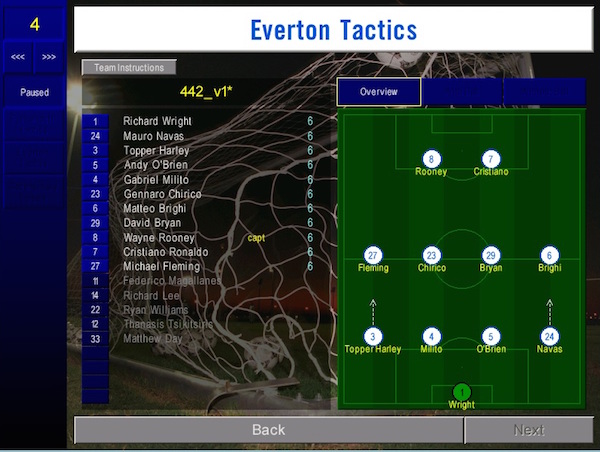 Credit to McLeish, he’s built a solid side for himself there. My Everton either won well or lost badly, but his are altogether more redoubtable. But we are finding our feet, finally. I always say that I don’t mind losing if we play well. If we’re playing well, if we’re making chances, if we’re only being undone by bad luck, silly red cards or odd refereeing decisions, you have to put your faith in the immutable law of things evening themselves out. Today might be the day that balance is restored in the universe.

Everton do most of the early running, with Wayne Rooney proving far more dangerous against me than he ever was *for* me. But Stefan Moore opens the scoring in the first half and we start to settle down. For some reason, McLeish has dropped his Greek lad in favour of Andy O’Brien and by half time, we’re in the ascendancy, testing Richard Wright again and again.

But Rooney scores straight after the break and we visibly sag. We’re not there anymore. I start to drift. I had a dog once. She was called Anna. She was a rescue dog with eyes moist with unquestioning love and ears that turned inside-out when she ran. But she came into our lives with serious baggage. I don’t know who owned her before she was picked up by the RSPCA or what they did to her, but I hope they have lived unhappy lives because every time one of us took a shoe off, Anna would cower behind the sofa and whimper. I think of Anna (who died fat, happy and utterly loved in 2003) as I watch Portsmouth shake in the storm of Everton’s revival. Are we Anna? Have we been broken by evil?

No, we have not. With 15 minutes to go, Fatih Dincer, back in the team for the injured Kourtoglou, swings in a free kick and Berbatov finally justifies his £6.5m transfer fee with a deft header into the back of the net. Everton rally, Everton attack, but Everton cannot get through that triangle of Cech, Gabbidon and New Greek Lad. We’ve done it. We’ve won. And we’re back in the fight. 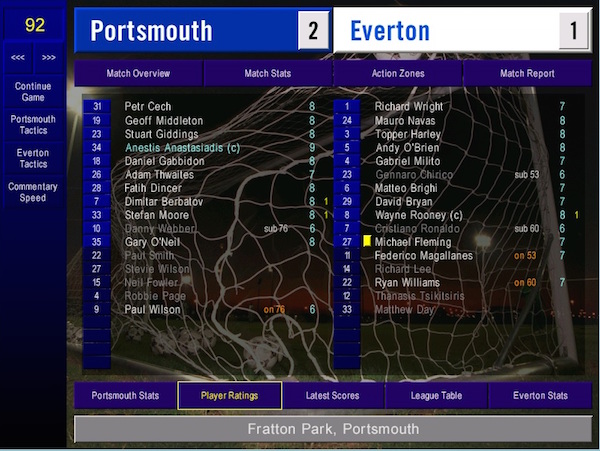 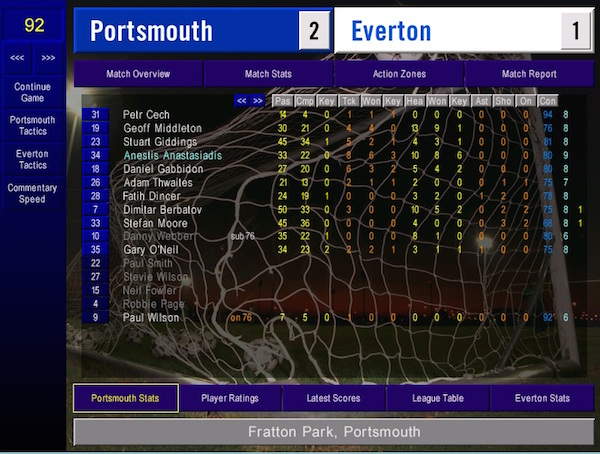 We’re still bottom, but we’re not as bottomy as we were. I can’t even think about the Manchester City game without getting upset, but we have to let that go. There are five teams within a single victory of us. We need to put three of them below us and we have only seven games in which to do it. There isn’t much margin for error now. April will be absolutely pivotal. This isn’t over. 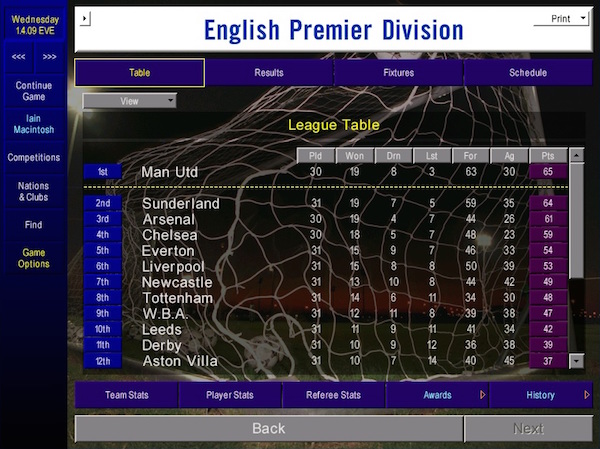 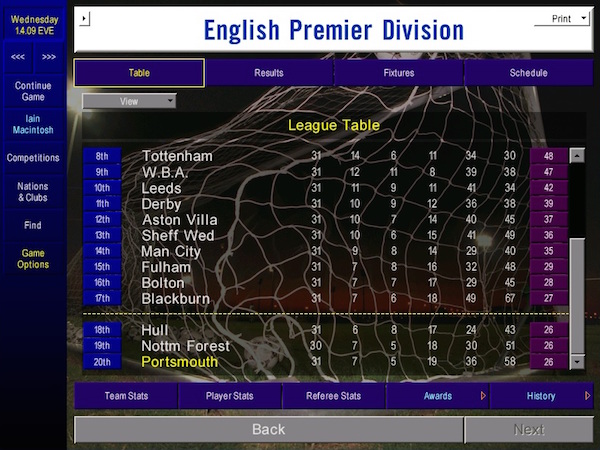