This is hard. As hard as it ever was at Everton. Despite large scale investment in big name players like Dimitar Berbatov and Petr Cech, we are going backwards. If it’s not one thing, it’s another. We started well against Leeds, but were down to nine men in the 48th minute and got battered. We started well against Aston Villa, but Petr Cech was suspended and his replacement Andy Marshall let everything through and so we got battered again. Weirdly, we’re playing well enough, we’re making chances, but we just cannot get the bit of luck we need to get a run together. And it’s not going to get any easier now.

Newcastle, a fine team under Martin O’Neill, are in town and they’ve got Carl Cort. He’s like a golden bullet. I can’t recall a time that I’ve come up against Carl Cort and he hasn’t scored. So whatever happens, we’re going to have to score at least two. We’ve still got Marshall in goal because of Cech’s suspension and we’re still sticking with this 3-5-2 that should give us coverage all over the pitch. It is high time that we got another win because, I don’t want to worry anyone, but my bum is beginning to squeak 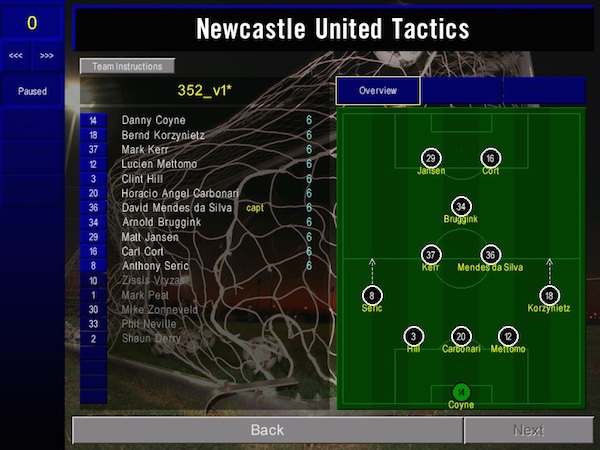 We didn’t score two. We scored three. And as well we might because we made 14 chances and put 13 of them on target. The only problem was that Newcastle scored four. It’s another disappointing performance by Marshall, but the real problem was young Darron Radcliffe getting himself sent off after 53 minutes on his full debut. We had no chance after that. Matt Jansen dealt the killer blow and, try as we might, we couldn’t get back on level terms. To make matters worse Gary O’Neil, our only really decent midfielder, was carried off in the second half and will miss the next game. I don’t what to say to the players. They did mostly what I wanted. That’s a good performance. But it’s another defeat.

After some deliberation, I go for the same formation for the trip to Nottingham Forest. It wasn’t the shape that got us beaten last week, it was the red card and the goalkeeper. Well, I can change that. Third choice stopper Paul Smith comes into the team while young Robbie Page fills the void on the right. I feel like I’m getting somewhere, I feel like the players are beginning to understand what I want from them. But by thunder, we need a win here. We’re in a lot of trouble. 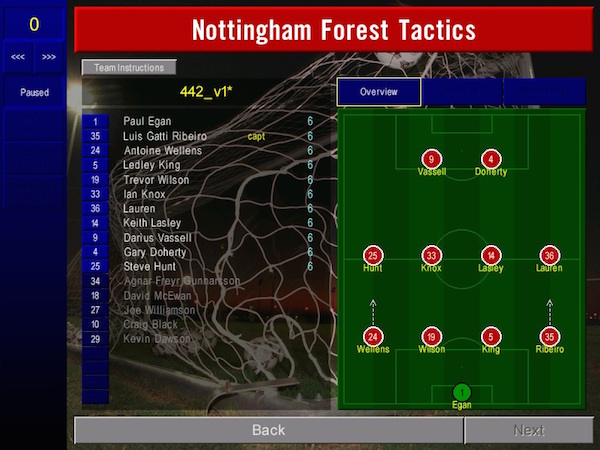 This really isn’t looking good at all. Again, we make plenty of chances. Again, almost every player has done their job. Page wasn’t the best and Williams has been better, but the rest of the team did just fine. It’s just that Forest did better. When we made chances, Paul Egan was equal to them. When Keith Lasley made chances for them, well, we got beat. This season is getting out of hand already. There are only eleven games to go and I think we need to win at least six of them to survive. We need to take drastic action.

When sorrows come, they come not in single file, but in battalions. We really could do without Chelsea away from home when we’re on a run like this. We cannot play the 3-5-2 against Claudio Ranieri’s side, they’ll rip us apart. We can’t go for the throat and play the trident either because we’ve already established that that’s stupid against markedly better opponents. There’s no point even thinking about a 4-4-2, which incidentally has led to Everton’s slow slide out of the title race. It’s clear that 4-4-2 isn’t going to work. So what? What can we do with a difficult trip to Stamford Bridge.

I seem to recall that we had runs like this back in the old days, when Goodison Park was being demolished around our ears and we were playing in front of a crowd of about 3,000. We had a shape that gave us cover on the flanks, a defensive midfielder and enough support to the lone striker to hit on the counter-attack. I’m just about out of ideas now, so I sincerely hope this works.

Look, we’re all adults. We know that this series will have to come to an end soon, but the idea was to play out another couple of seasons and then bow out with a bit of dignity as the regens take over. The idea was not to get my pants pulled down some six weeks before the new game comes out. This isn’t just embarrassing, this is inconvenient on a corporate level. What the hell am I supposed to write about if I get sacked? I can’t write about real football. I don’t know anything about real football. This is supposed to be the one thing in my life that I’m actually good at, a fifteen year old computer game. I’m doing my best to hide it from my friends and family, but I am seriously buckling under a combination of pressure and shame. So…yeah…we’ll take each game as it comes, Clive. 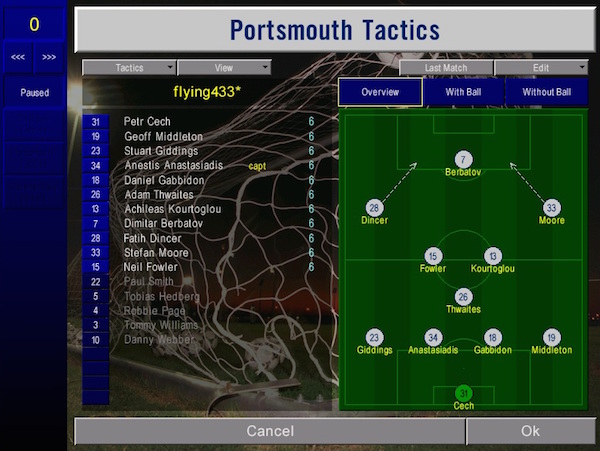 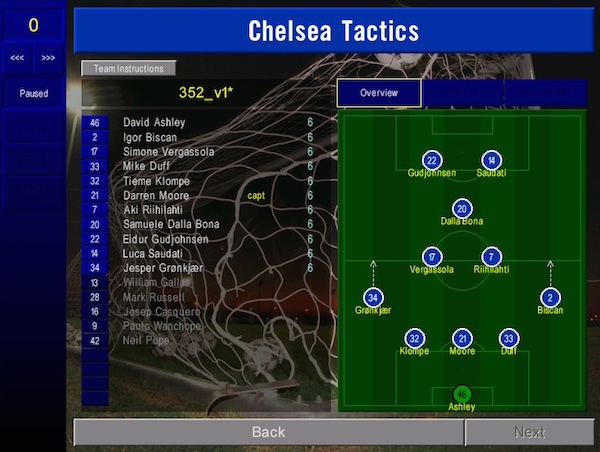 There are some days when the idea of sitting in front of a laptop exhorting greater efforts from a collection of numbers seems something of a waste of time for a grown up. And then there are some days when the feeling you get from reading a simple text description of a full time whistle is better than a significant percentage of your sexual experiences to date. Today, finally, everything came together. Cech was brilliant in goal. My two new centre-backs, Danny Gabbidon and Anes…Anet…the new Greek lad were indomitable. Regen Geoff Middleton was outstanding. And yeah, the midfield was a bit of average, but it did its job.

Chelsea were kept at bay all the way to the 76th minute and then, hold me close, oh Fatih Dincer slammed home a free-kick to put us in the lead. That was it. No fucking about. The new formation was immediately replaced by the Helms Deep, 4-5-1, everyone behind the ball emergency tactic. And we held out for 14 increasingly tense minutes. We are now just two points from safety. Just when we thought were out, we pulled ourselves back in. This isn’t over. You might like to think it’s over, but this isn’t over. And now we launch our counter-attack. 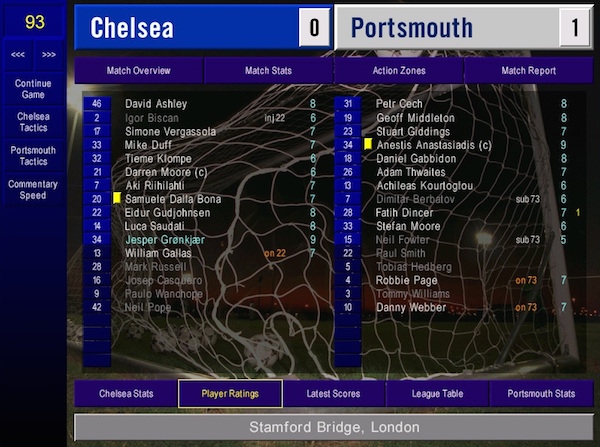 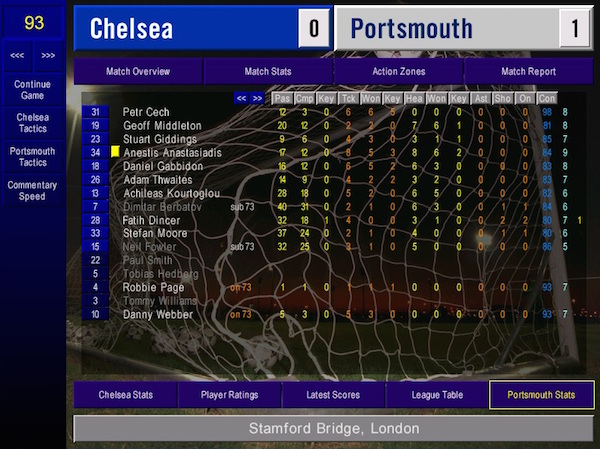 West Bromwich Albion play 4-4-2. They have always played 4-4-2 and I suspect they always will. And you know what punctures a 4-4-2? A trident. A big trident with three great strikers on the end of it. We are not done here. We will not go quietly into the night. We will go kicking and screaming and thrashing around, waving whatever comes to hand at whoever gets close enough. This is it. This is our moment. This is when the world discovers of what dark matter Portsmouth Football Club is made. Well, let me tell you right now. It is made of testicles. Get out there and fuck them up. Cry God for ‘arry, England and St George! 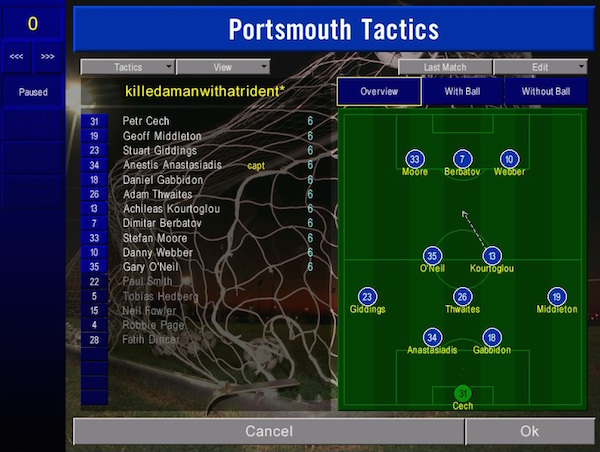 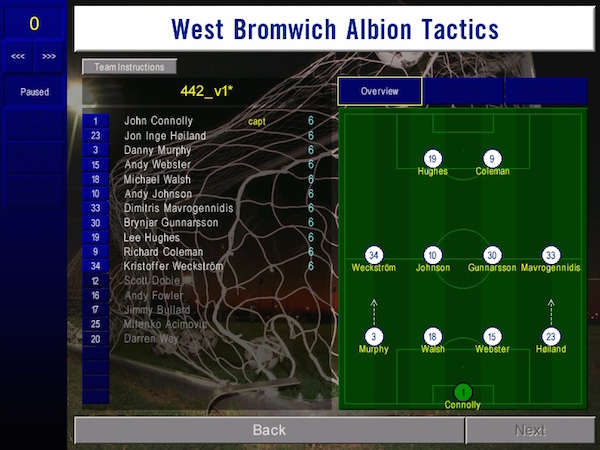 Their goalkeeper was the man of the match. That’s all you need to know. He was the man of the match. The man of the fucking match. Scroll down. Look at the stats. No-one played badly. Everyone played well. Seven shots. Seven shots on target. Look what we did to their boys. But John Connolly was there to stop it all. We need a cushion. My God, we need a cushion. That was all I said during the second half. A second half, I might add, that we played without Stefan Moore, whose fitness was draining away as he complained of a knee injury.

Dincer, for whom there was no room in this game despite his heroics last week, was hurled on, but we couldn’t get anything out of him in his familiar attacking midfield position. It was only when he went out of position up front that he started to perform. But by then it was too late. With seven minutes to go, even as I reached for the tactics button, Jimmy Bullard smashed our dreams into a thousand pieces. How costly will those two lost points prove in the final reckoning? How do we pick ourselves up from this? And how will we far under pressure in our two games in March? Especially when one of them is against Everton… 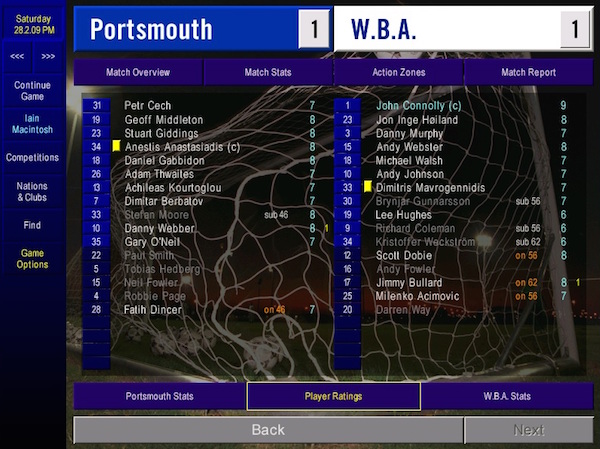 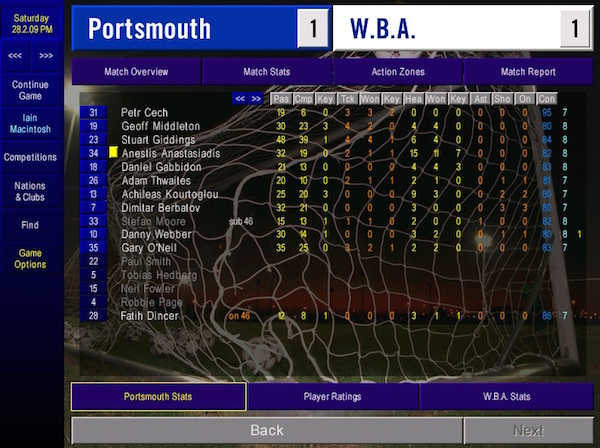 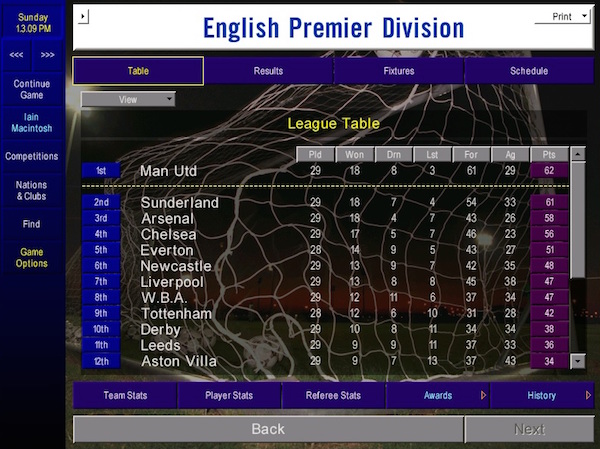 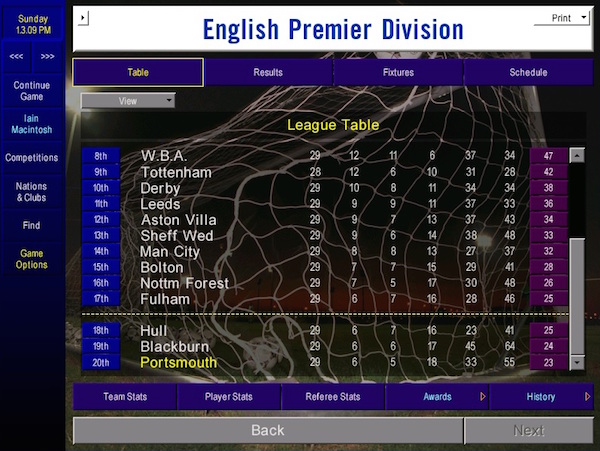