Sometimes, in order to take several steps forward, you need to take a few steps back first. We spent a fortune on new players in December and we didn’t win a single game. But I’m not too concerned. Because there is class in this team now. I’m not saying that I haven’t made mistakes. I think perhaps that choosing to play a super-attacking trident formation at Old Trafford was, in retrospect, a little unwise. But you have to try these things. So I understand why the supporters are divided.

We have what should be a straight-forward start to the month with a trip to struggling Bradford in the third round of the FA Cup. Unfortunately, we’re not in the best shape for a scrap. Our Christmas exertions have left the squad drained and I’m still without a number of players. My midfield is desperately weak, reinforcements are held up by work permit wranglings and Gary O’Neil is still injured. Petr Cech and Dimitar Berbatov have been, and let’s not beat around the bush here, woeful since they arrived and we’re having trouble finding a balance in the team, given that Giorgos Georgiou, my best winger, has agreed a move to Liverpool and is no longer interested in playing for Portsmouth. So we need to start again with a fresh plan. And I recall being in a similar situation at Everton, defensively sound, creatively flustered. It’s time for a back three. 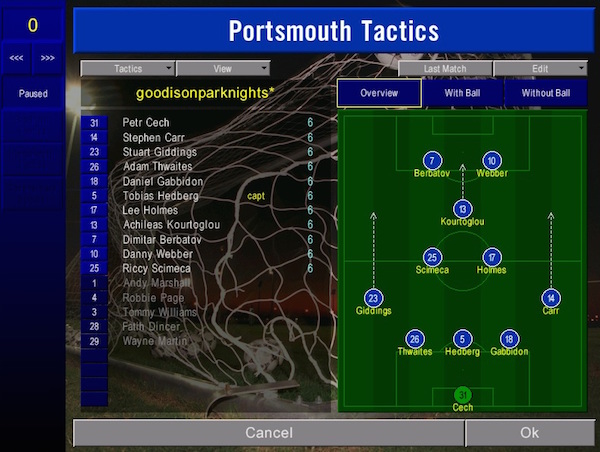 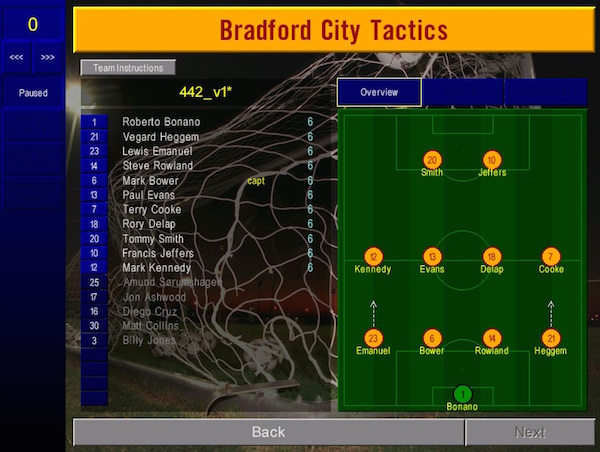 The first half is an unmitigated disaster. Bradford pour through us at will, scoring once and threatening to do it again repeatedly. For our part, we lash a few shots miles wide and that’s it. The full backs offer nothing, the midfield is dreadful and the strikers are blowing out of their arse. I make two half time substitutions and return to a more conventional 4-4-1-1 in the hope that it solidifies the team.

It does exactly the opposite. The second half is another unmitigated disaster in a city still recovering from the first unmitigated disaster, like a tornado hitting Los Angeles immediately after a volcano. Absolutely everything goes wrong and, while I realise that this is a particularly strong field, it might be the most humiliating result in my career. It’s hard to know what to do at this point, but going over the road to the pub would be at the top of the list, were it not for the fact that it’s only 10am. That said, there’s an off licence not too far from here… 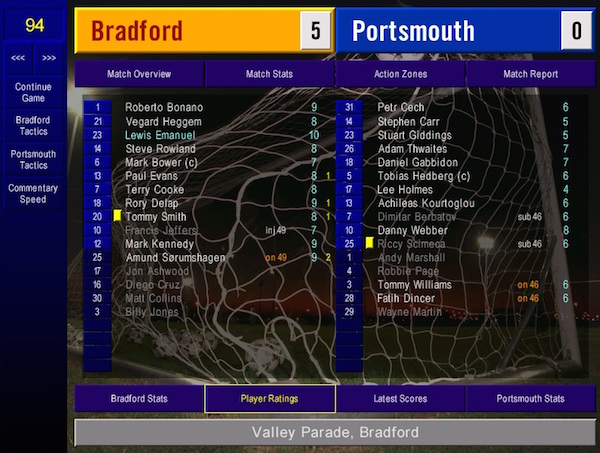 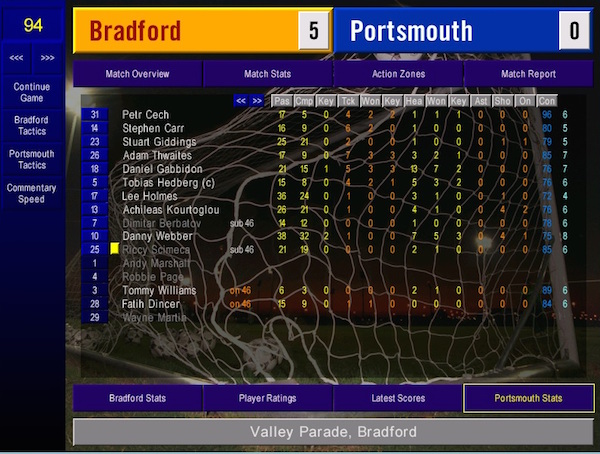 Arsenal away isn’t really the sort of fixture you want when you need to recover from a pounding, even if it’s Jim Jefferies’ Arsenal. They’ve still got Thierry Henry, 31 now, but a continued threat to Premier League defences. They play a simple 4-4-2, but we can’t do that because we don’t have the wingers and you saw what happened at Bradford.

I think our other major problem is that we don’t have the midfielders either, so perhaps we can help ourselves out by just playing more of them. I alter the formation slightly to pack the middle. Three midfielders. All rubbish, but safety in numbers, eh? Stefan Moore will make his debut, but I wish he wasn’t the only new face. I don’t know what they’re doing at the Home Office, but I’d really like them to process this work permit application now. 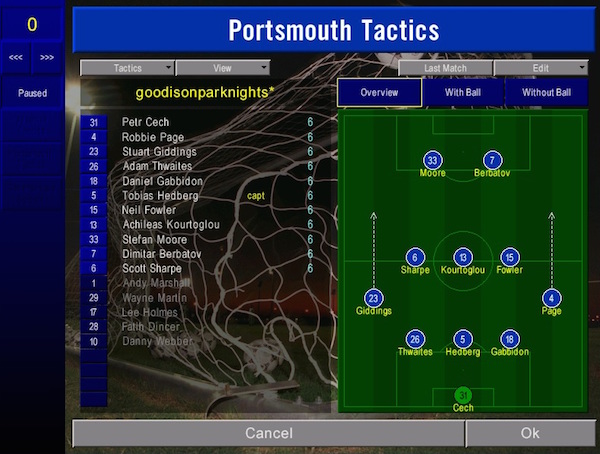 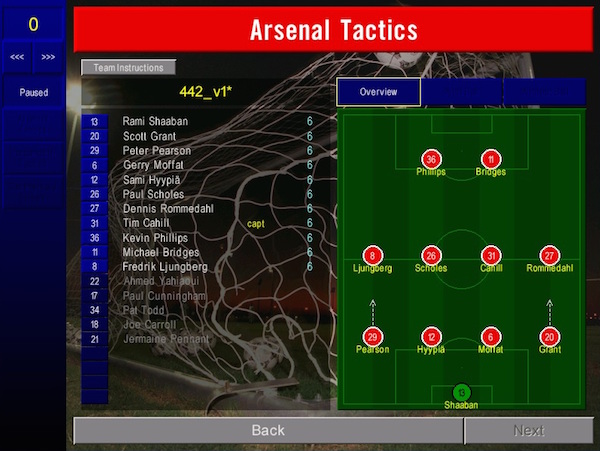 An improvement of sorts. But not enough. While there are positives to which we can cling, we’re second best and indebted to Cech for keeping the score down. Dennis Rommedahl gives Arsenal the lead midway through the first half and it’s not until the last 20 minutes that we start putting shots on target. Berbatov gets the ball in the net in the 80th minute, but it’s disallowed for offside. That’s the closest he’s come to scoring since I spunked all that money on him. This really isn’t going very well at all and for the first time, I’m wondering if perhaps I should have taken a deep breath and carried on at Everton. I mean, they were quite good really. You know. When you stop to think about it. This lot though…this lot are rubbish. 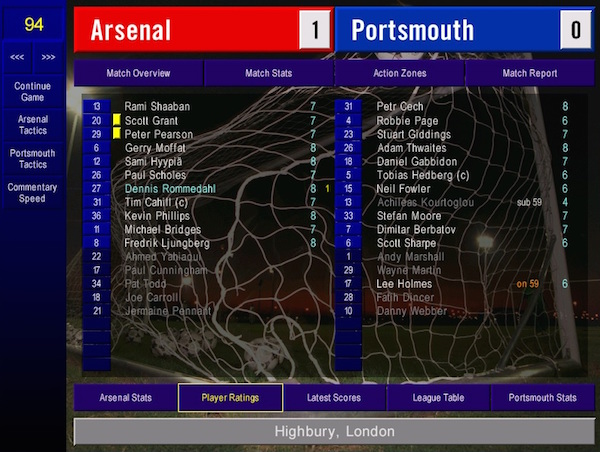 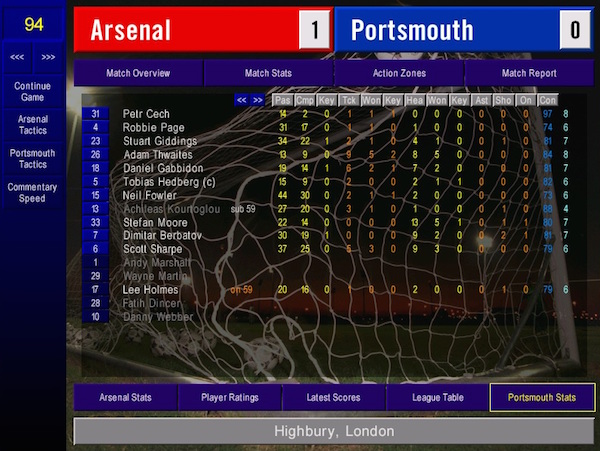 We have to get things sorted out now, but it’s Bastard Bolton and you know what they’re like. Always getting in the way and Boltoning things up for us. But it is at Fratton Park and they are, when it comes down to it, just a mid-table side. We should be a mid-table side too. God knows, I’ve spent enough money on these players. We just need to get the balance right. I move Neil Fowler, the young regen with great defensive attributes and horrific match averages, into the middle where he can man-mark Bolton’s number ten. Then I tinker with Scott Sharpe and Achileas Kourtoglou’s instructions so that they do all the attacking while Fowler sits deep. And then I’m really very much out of ideas. I’ve tried 4-4-2, I’ve tried the Trident, I’ve tried the back three and now I’m trying the back three with a reinforced midfield. If this doesn’t work, I’m not sure where to go. 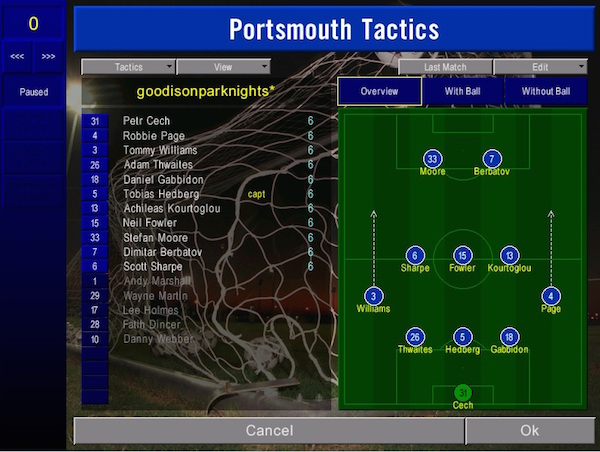 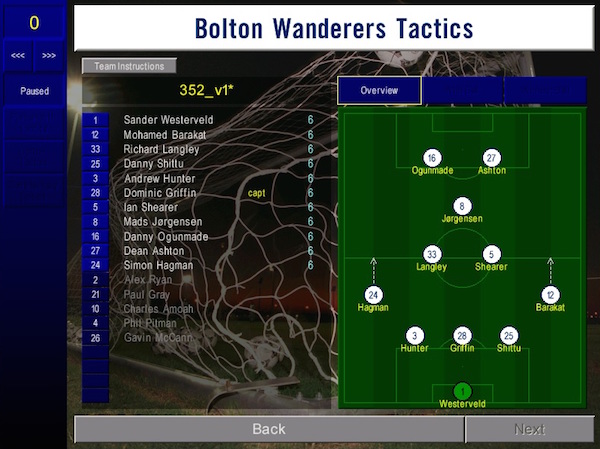 If I said that a result like this had been on the cards, it would be disingenuous, but there had been clues that we were turning a corner. Petr Cech, after making a horrible debut and an even more horrible follow up, has been steadily improving. Adam Thwaites has never let me down, Danny Gabbidon has settled quickly. It’s always been about the midfield. Well, today the midfield performed. We took the lead through Kourtoglou and really should have extended it. Obviously Bolton came back at us because that’s what Bolton do, that’s why they’re bastards, but we held our nerve and Kourtoglou grabbed another. The only change I dared to make was to put Fatih Dincer in as an emergency left wingback when Tommy Williams’ lack of fitness betrayed him, but that worked out fine. I feel a profound sense of relief. Let’s hope that this is a turning point. 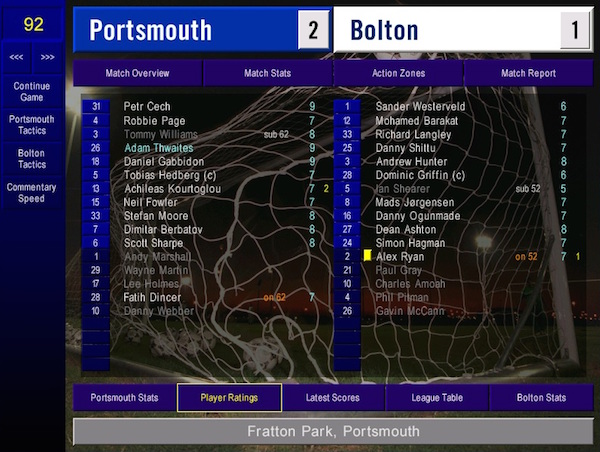 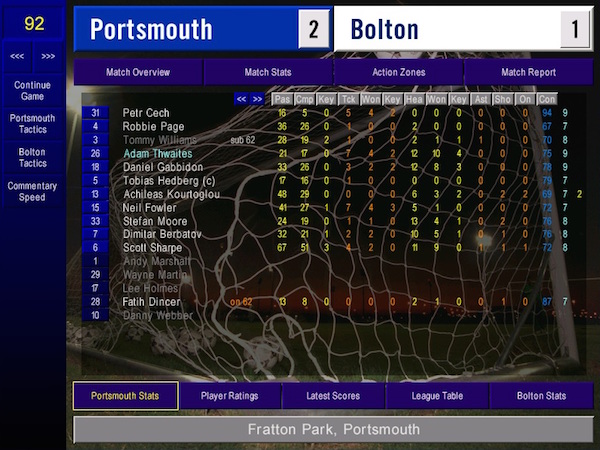 Good news and bad news arrives in the wake of that crucial victory. We are delighted to welcome Anestis Anastasiadis to Portsmouth. A colossus for Ipswich and Blackburn, he’s going to be the centrepiece of Portsmouth’s defence for the next five years. The bad news is that, despite having plenty of money left in the bank, the board have reduced my budget to £1m, which means that the brilliant Chilean midfielder whose work permit I’ve been waiting on is now out of reach. This is a problem. In a desperate bid to balance the books, I put Steven Carr, Wayne Martin and Lee Holmes up for sale. 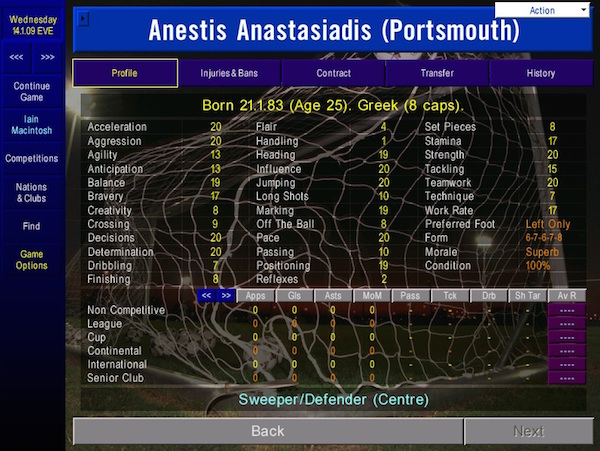 But it’s Leeds United that occupies my thoughts for now. I so nearly became their manager in the summer, denied only by the slight hitch that they didn’t want to hire me. They hired Johan Neeskens instead. Oh, how different this season could have been. They also play a 4-4-2, so much for continental sophistication, but they haven’t exactly set the Premier League alight and are wedged into 11th place. Hopefully, we’ll be able to do something about that. New Greek Lad makes his debut on the left of defence and I’m moving Thwaites into the midfield where he might have an influence on the others. Gary O’Neil finally makes his first appearance for me. We’re almost full strength. 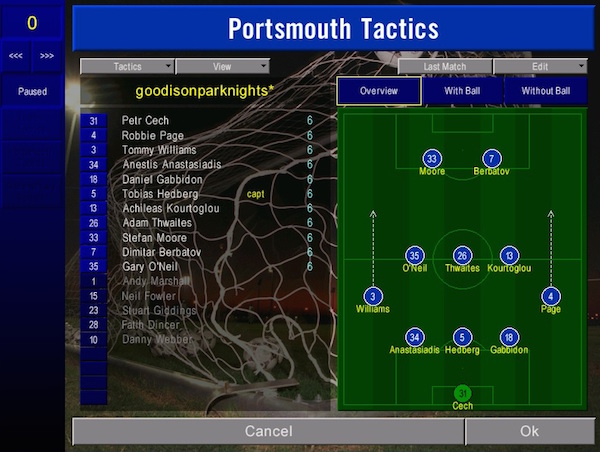 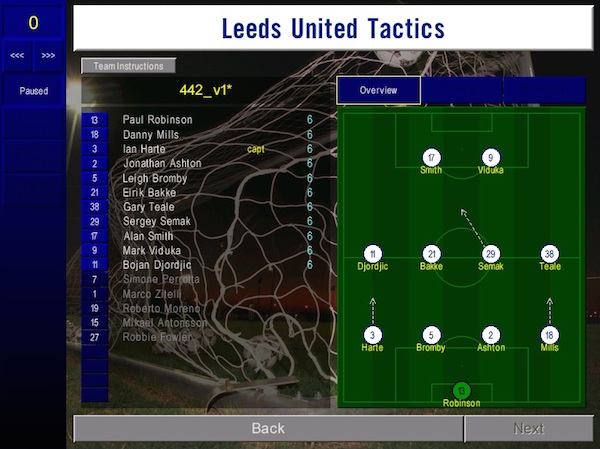 Thwaites certainly does have an influence. He shoves Danny Mills over in the 10th minute and is shown a straight red card. Petr Cech saves a penalty, but then decides to join Thwaites in the bath shortly after half time when he fells Mark Viduka in the box. His replacement Andy Marshall fails to get close to Ian Harte’s spot kick. With nine men, we haven’t got a hope in hell, but it’s nice to see the New Greek Lad get off the mark with a consolation goal. That’s the only positive from this though. We wanted a result that would help us build on the Bolton win. We got another disaster. 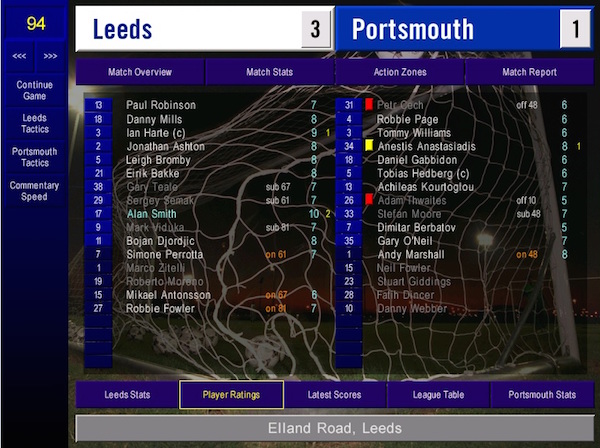 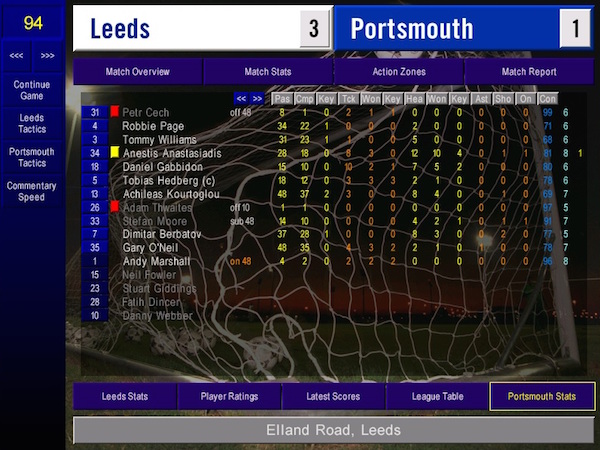 Worse still, the Home Office finally get back to us about our Chilean midfielder. The work permit is accepted. It’s just that we no longer have the £4m in the transfer budget to buy him. I delay the deal for a week and ask the board to free up some of that cash they’ve got rattling around in their vault. They’re not playing ball. This is awkward. Seven days later, the transfer is cancelled. 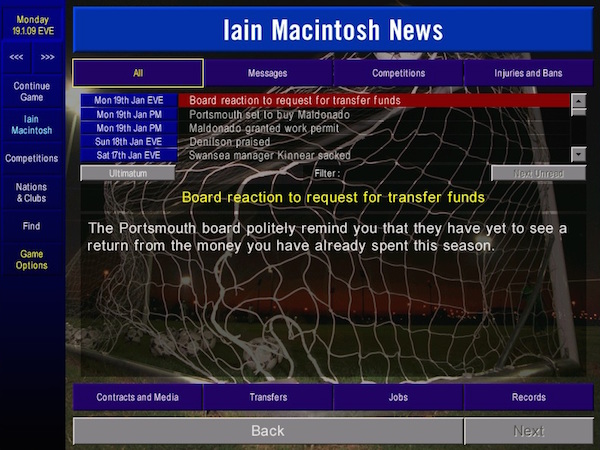 We end the month with a chance to beat Aston Villa at home. If we can pull this off, I think we can feel pretty positive about January. More excellent new arrivals and two wins. Not too shabby. But if we slip up again, there’s no disguising the fact that we’re in a spot of bother. We’re not helped by three suspensions (New Greek Lad was carrying a lot of yellow cards). In comes Andy Marshall, Neil Fowler and hopeful regen Stevie Wilson. This could be a bit tricky. 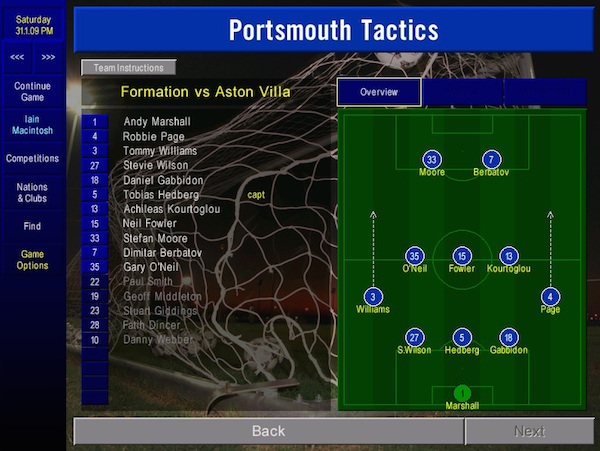 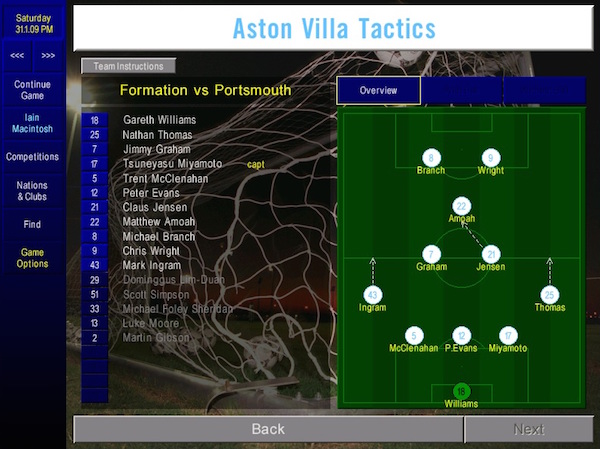 We made chances, put them all on target and scored two of them. Stefan Moore is up and running. The midfield was excellent, a perfect blend of silk and steel and high ratings all round. Defensively, we were pretty decent too. Not water-tight, but pretty good. Aston Villa only made five chances all day. But if I have just one, tiny little quibble, it’s that all of them went in. I felt guilty about dropping Andy Marshall when Cech arrived. I don’t feel guilty anymore. 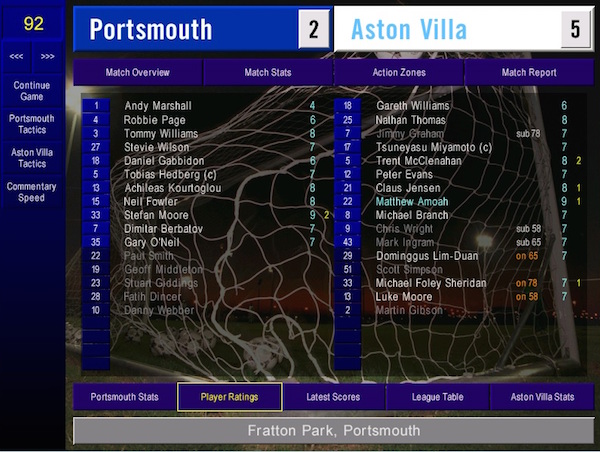 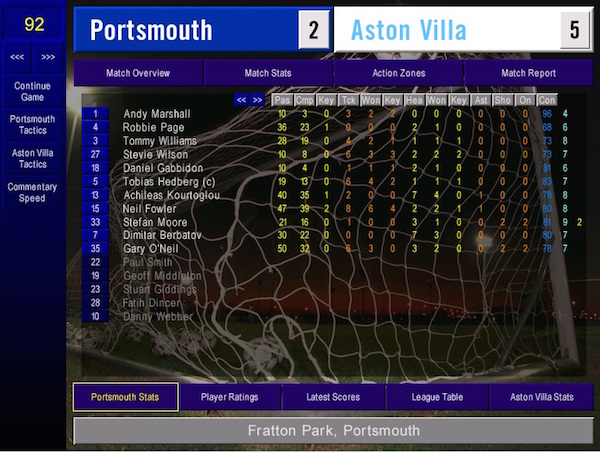 I still believe in this. We have better players, we’re playing better football. We’re two months into a huge rebuilding project. But I have to be honest. We’re not making as much progress as I would have liked… 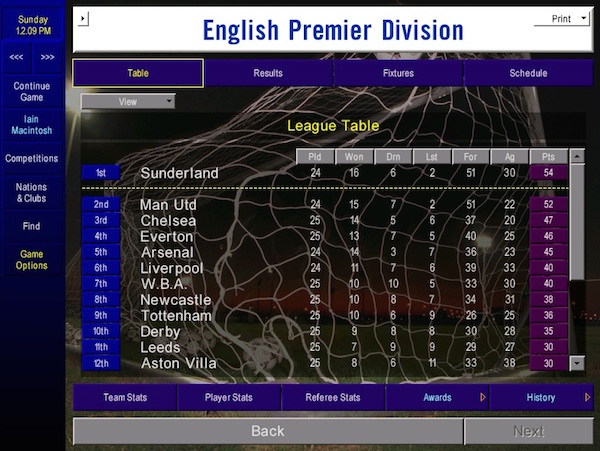 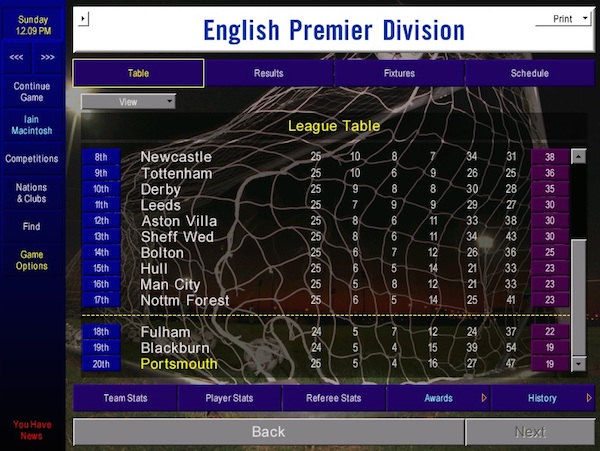