Can a man who failed so miserably with Everton perform any better when bestowed with immortality and granted complete control of an ancient society of hunter-gatherers? Weirdly, it seems that he can. The Aztecs have been slapped so hard that they won’t leave their frozen wastes in the north. He could have protected the Indians, but he preferred to let the French chase them from their lands. The Mongols did nothing to him, nothing whatsoever, but he effectively wiped them out anyway. And now he turns his eye to the French. This man shares with an office with us. He always seemed quite nice, but something changed. We’re freaking out a bit. Send help before he annexes the kitchen.

Episode 1 (Birth of a Nation); Episode 2 (The Race for Copper); Episode 3 (Love Me Tender, Love Me Dead); Episode 4 (The Hills Are Alive With The Sound of Screaming); Episode 5 (He Would Do Anything For Chelmsford. Including *That*); Episode 6 (On My Signal, Unleash Montserrat Caballe); Episode 7 (War Is Over. If You Want It…); Episode 8 (Behold, The Hanging Gardens of Chelmsford); Episode 9 (Hans? Are We The Baddies?); Episode 10 (The Essex Superstate Takes Shape); Episode 11 (You Cannot Kill Keith Richards); Episode 12 (I Still See Gandhi’s Face At Night When I Close My Eyes); Episode 13 (For Some Reason, The Natives Resent Colonialism); Episode 14 (Lemmy Crushes The Resistance); Episode 15 (Soon I Will Be Invincible) ; Episode 16 (You Should Not Have Lent Me That Napoleon Biography); Episode 17 (Buster Bloodvessel’s Blitzkrieg); Episode 18 (See How They Run); Episode 19 (Tony Blair Has Had Just About Enough Of Your Shit)

No-one ever wasted any time on reconnaissance. As my forces recover from their exertions in Mongolia, I send a couple of explorers into French territory to assess their military. We have been at peace with the French for so long that we have an open borders agreement, so this won’t even arouse any suspicion. Those poor fools. They probably think I’m just updating my maps. By the time they discover the horrible truth, it will be too late.

Like the Mongols, it seems that the French shifted their production efforts to colonisation when I sold everyone the technology that allowed ocean-going galleons. They’ve already started to send settlers across the oceans to the unclaimed southern continent. That doesn’t concern me. The northern territory of the new world is all I wanted anyway. But it’s kept them busy and, most importantly, it’s stopped them from building up their armies. And why would they? Their Essex neighbour to the north has signed an open borders agreement with them. It is a peace in their time. Ha! Idiots. 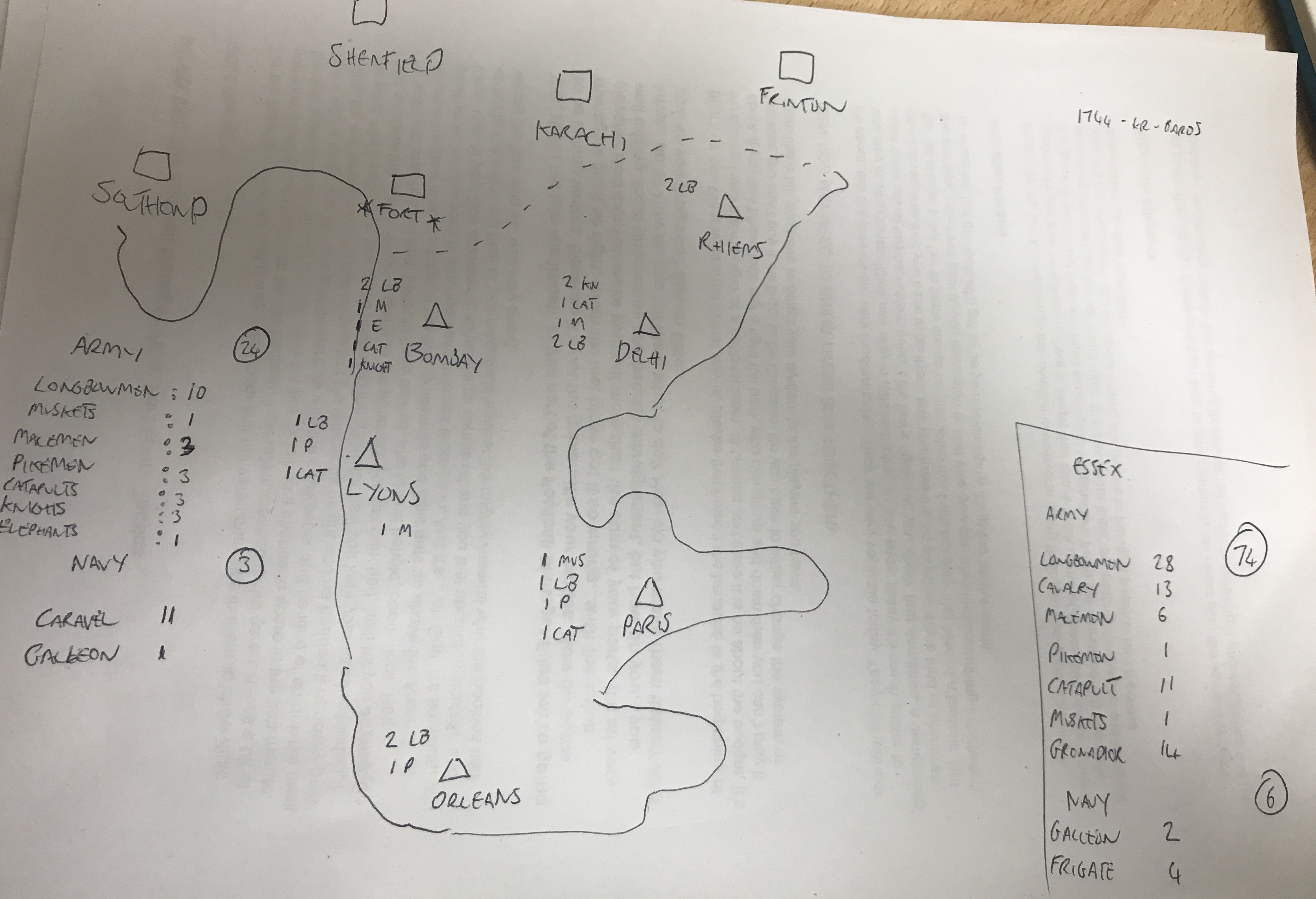 Not only do we dramatically outnumber them on land and sea, but we’ve also developed rifling which means that we can upgrade all of our units with that pile of cash I’ve been saving. Riflemen have a strength of 14, which is nearly three times that of an axeman. Grenadiers have a strength of 12 and Cavalry units are up at 15. Add in the fact that my soldiers are experienced campaigners with multiple bonuses and you’re looking at soldiers with actual strengths of nearly 20. The French are in so much trouble. 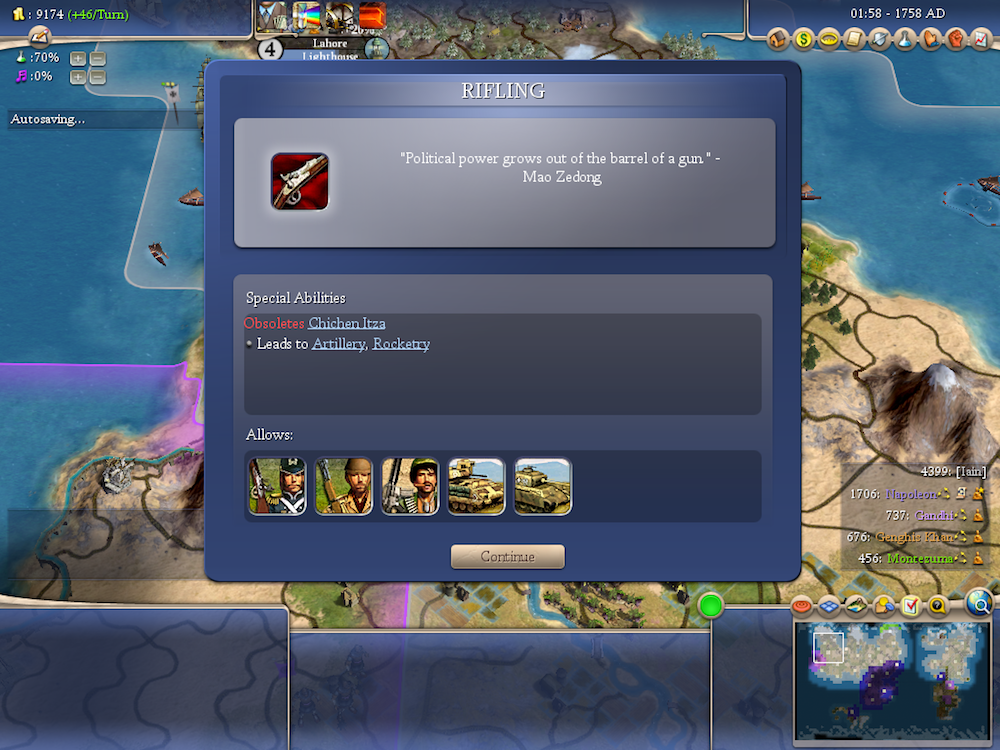 As with the Mongolian campaign, and inspired by the work of the real life Napoleon, I break my units up into three “Corps” so as to create a mobile, dynamic fighting front able to react to changing battlefield circumstances. Each group has riflemen, grenadiers, cavalry and catapults.

Rod Stewart will lead Attack Group 1 against Bombay. This is the most heavily defended of all the French cities and it will require Stewart’s group to traverse considerable distances before the assault begins.

Bruce Springsteen will lead Attack Group 2 against Delhi. This will also require him to travel through enemy territory. I expect any counter-attack to come through these central lands. But Springsteen is ready for anything.

Henry Rollins, that magnificent hero of the Essex Empire, has earned the easiest mission. Rhiems is protected by only two longbowmen. They won’t even have time to recognise what has hit them. 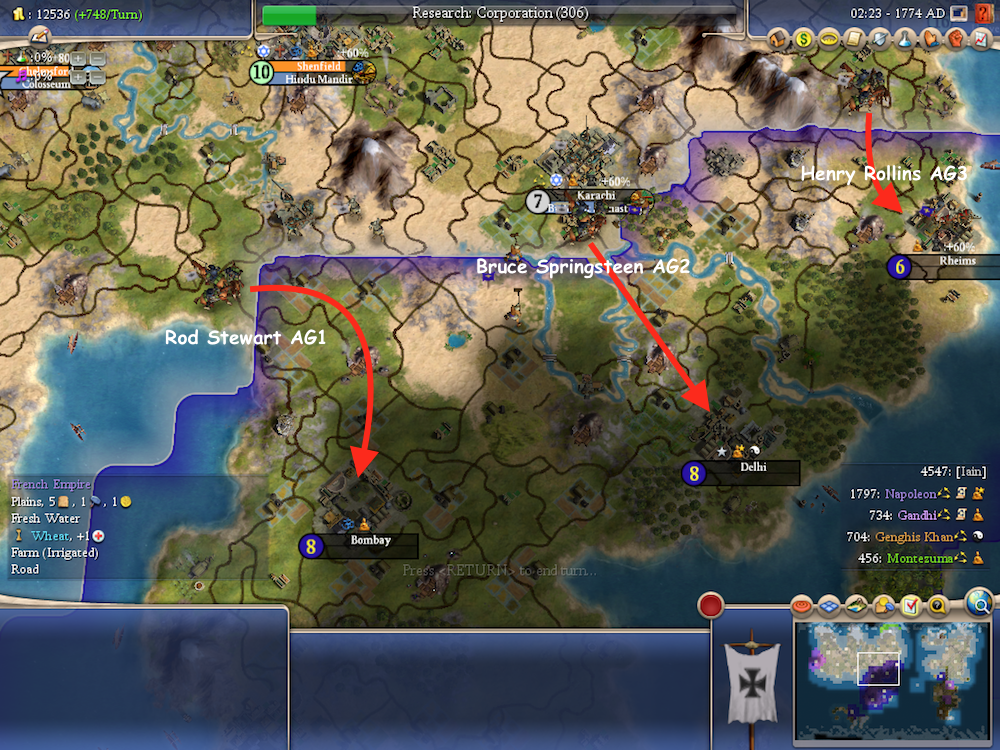 It only remains for me to tell Napoleon what’s about to happen. I’m actually a little surprised that he hasn’t figured it out already. I did take the precaution of amassing and organising my units to the north of Shenfield so as to minimise the possibility of tipping him off, but even so…I mean, has he even been watching? I can’t respect him. 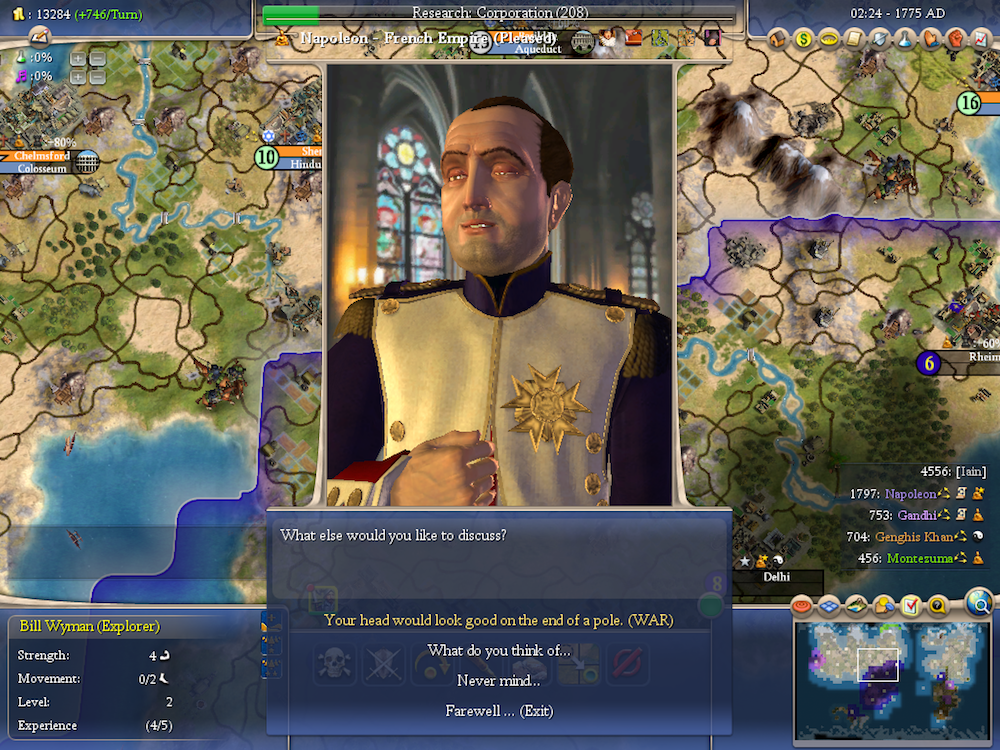 The war is short and horrible. Rheims falls immediately and burn it to the ground with such ferocity that only the blackened stones could tell you that there was once a city here. 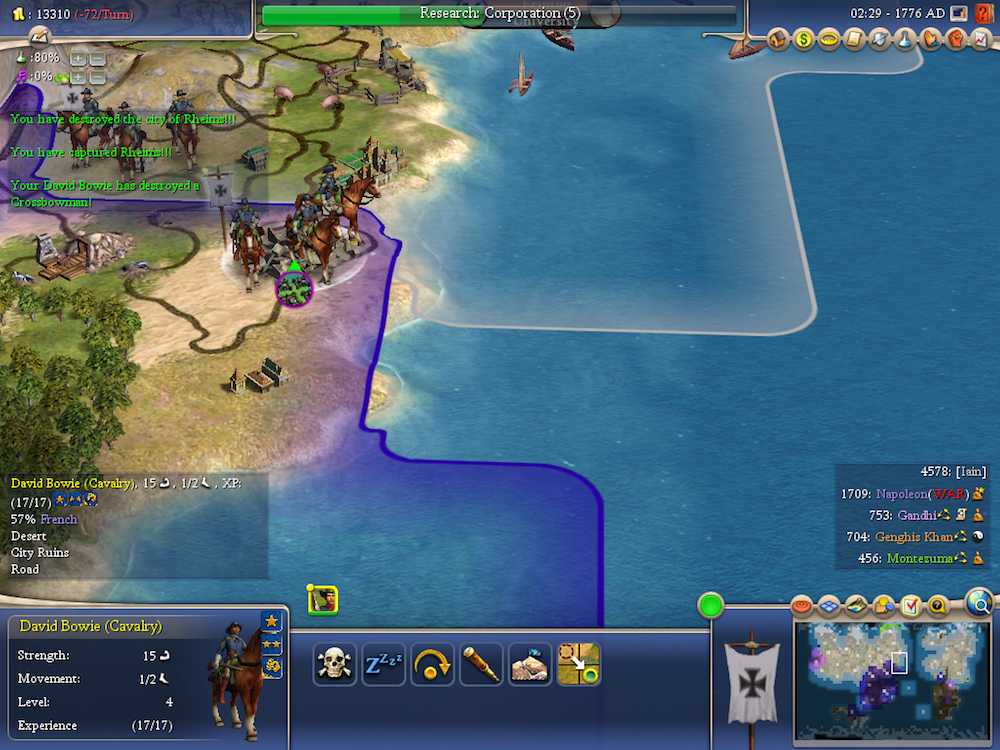 Bruce Springsteen’s Attack Group 2 are slowed only momentarily by a group of four French units, but they dismiss them without losing a unit. Delhi holds out for slightly longer than Rhiems, but not by much. It too is swept from the land like a dropped muffin. 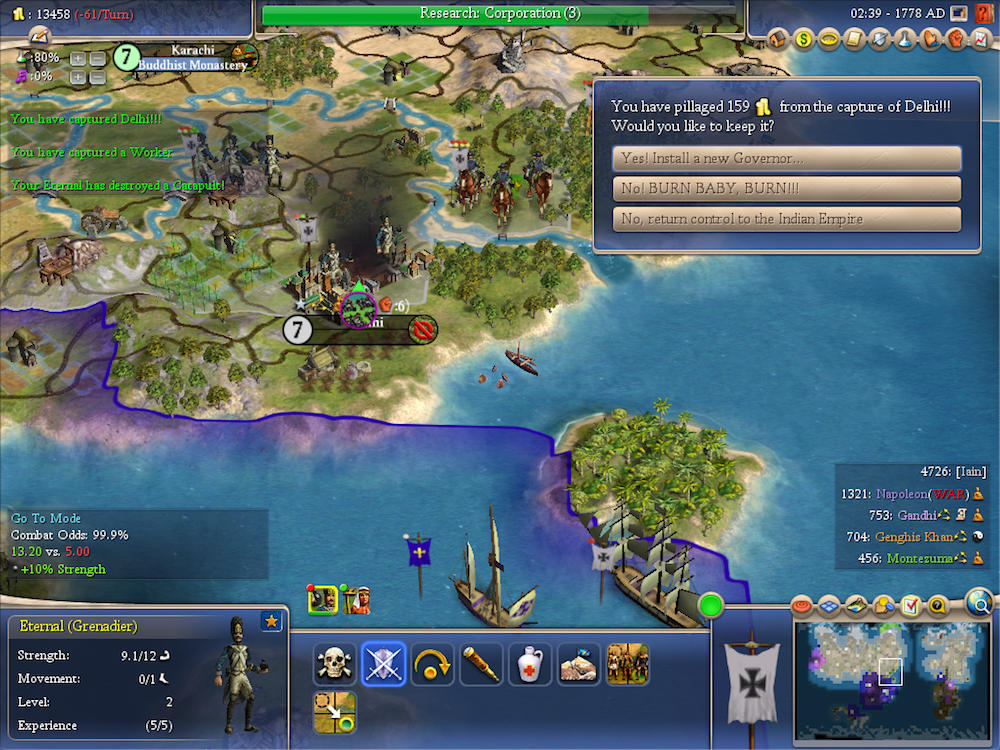 Courtney Love needs no second invitation to visit hellfire upon the citizens of Bombay. She’s seen it all, she served me well in the northern Mongolian lands. She understands death. She respects it. But she does not fear it. She has made it her slave. She’s also a keen ornithologist. 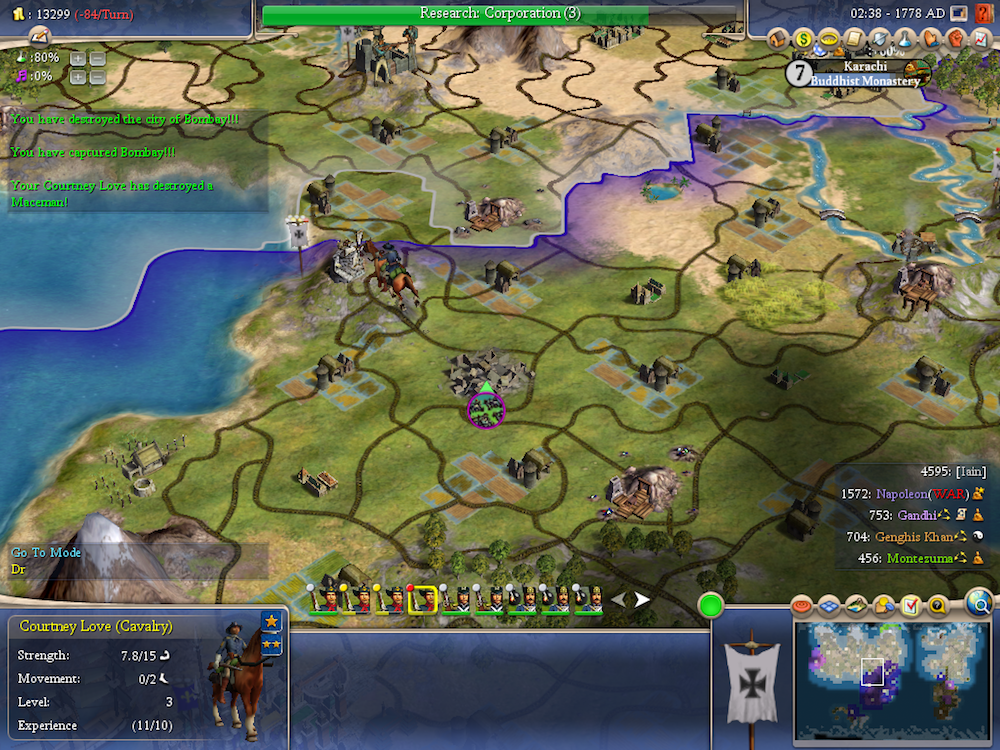 Lyon, her garrisons depleted by Napoleon’s unwise counter-attack and her walls levelled by the HMS Run DMC, receives the same sentence as her sister cities. But there is no pause. There is no let up. While Attack Group 3 sweeps around to consolidate the battle field and guard against any lingering unit foolish enough to continue the fight, Groups 1 and 2 clatter down the country to surround Orleans. 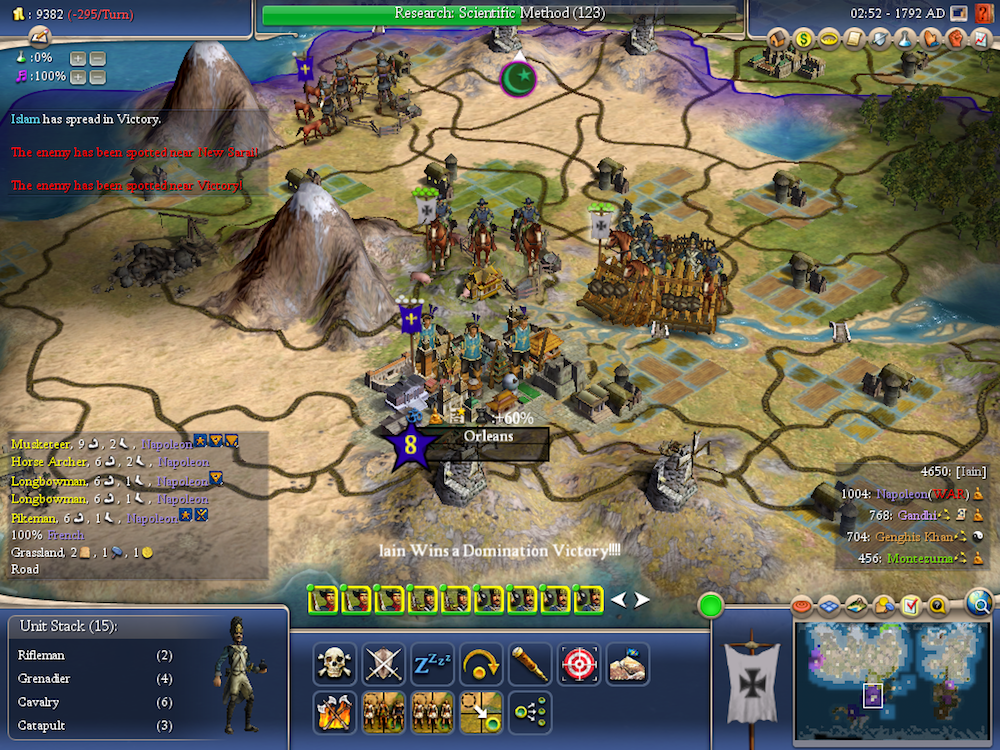 With the population of the Essex Empire far in advance of our rivals and her territory expanding with every turn, it only takes one settler unit to unload the wagons and bestow a suitably triumphant name upon the camp and victory, total victory is ours by way of domination. 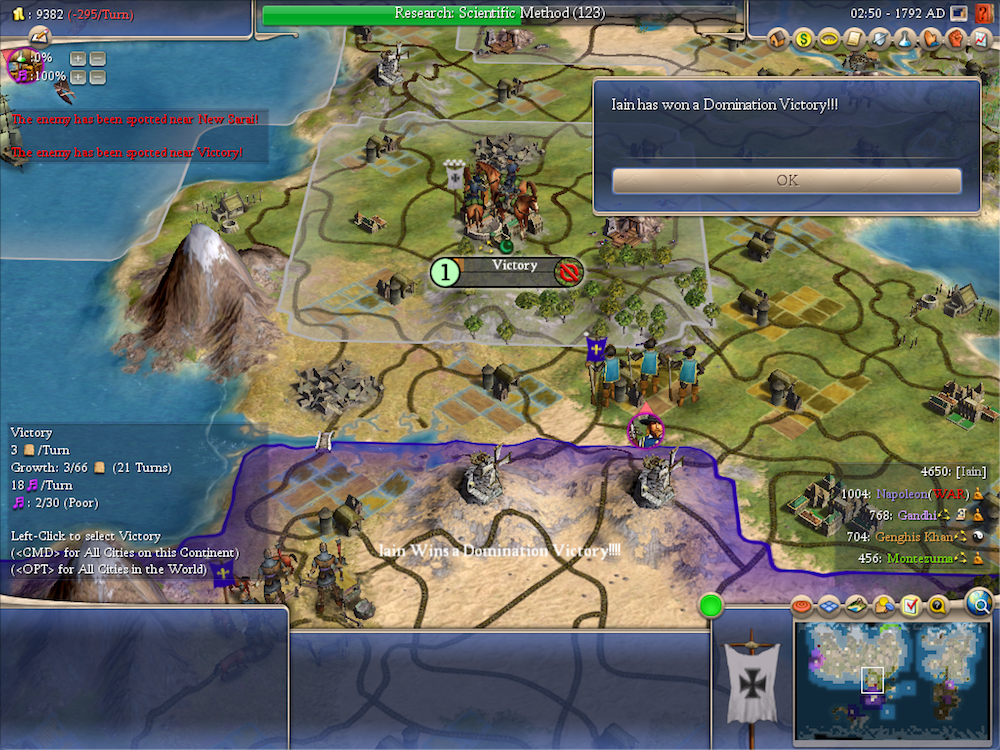 In 1792, the continent is ours, save only for the small enclaves of beaten nations I allow to survive for posterity. 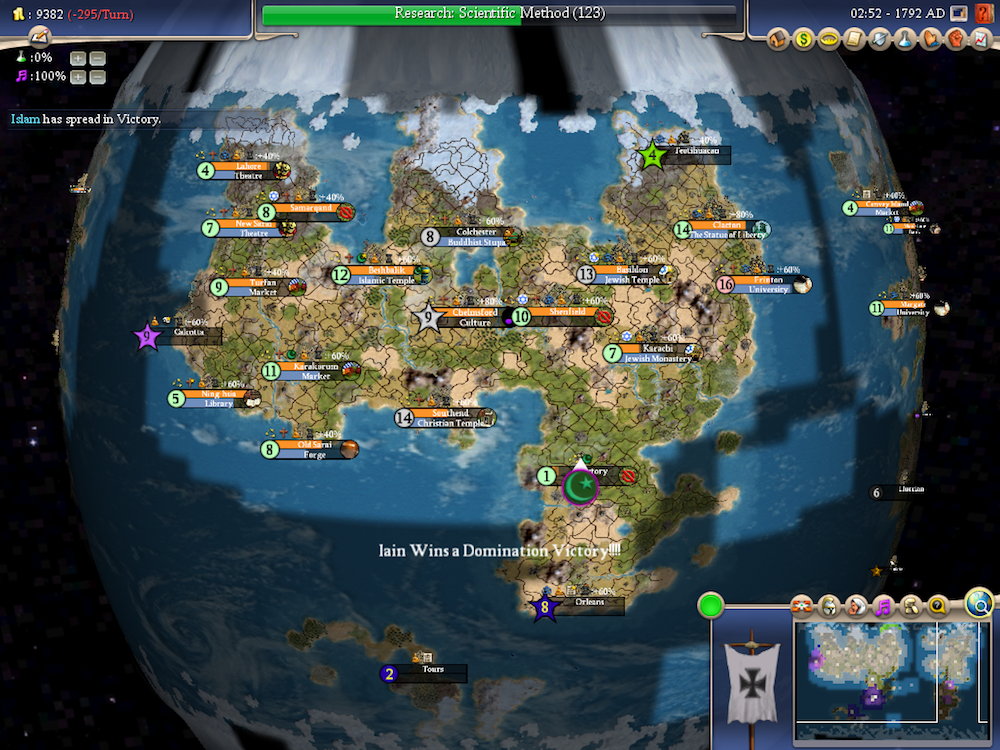 The northern territories of the new world are ours as well and I care not for the southern lands where pitiful wretches scratch out a living alongside barbarians. 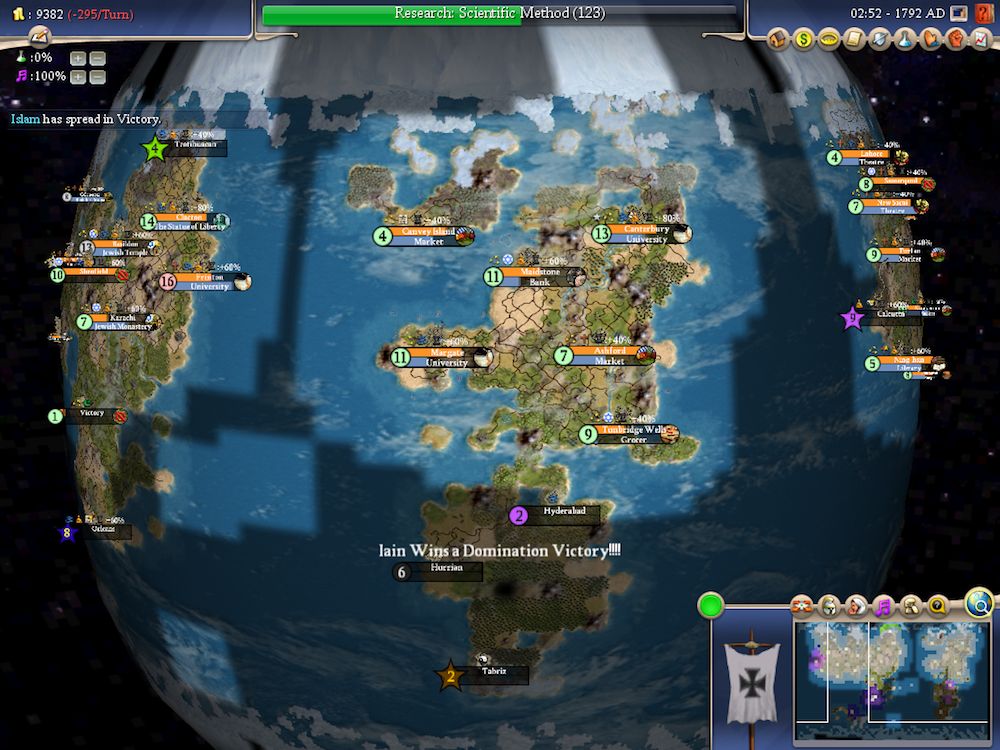 As you can see, there was a very clear moment when a strong position became a winning position and then an unassailable position. 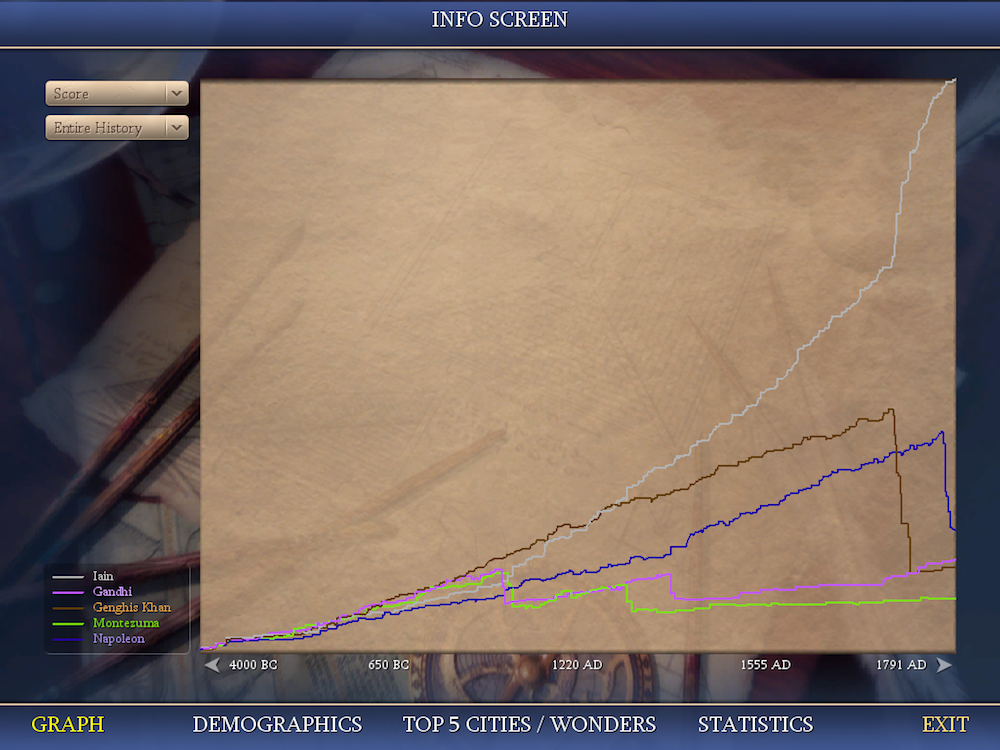 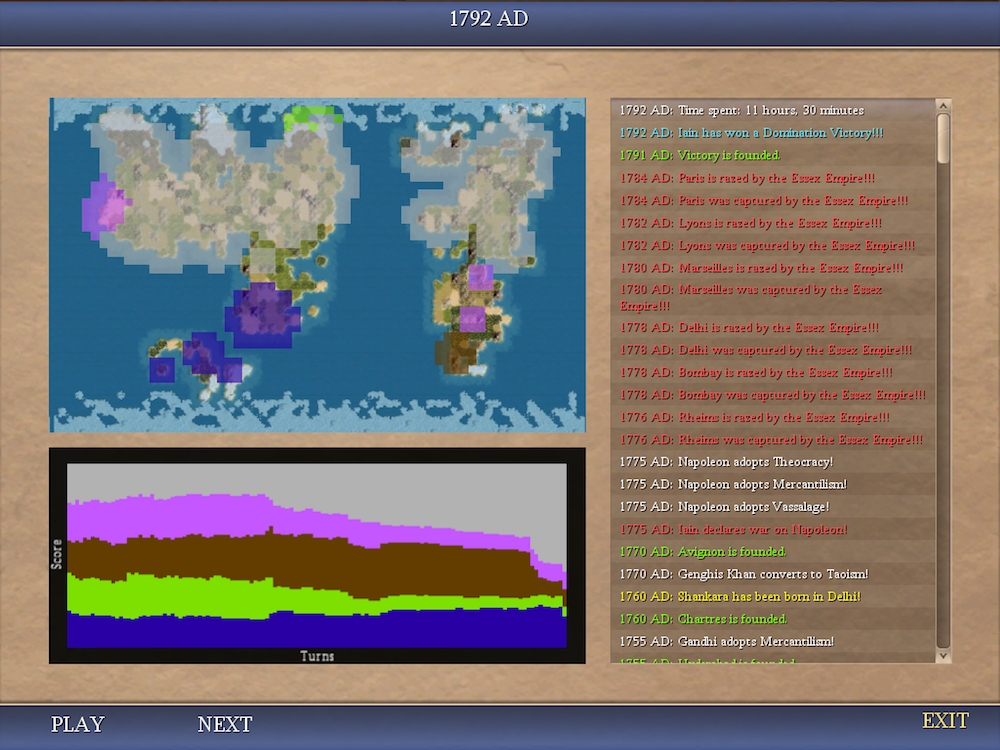 I am delighted that Clacton has been recognised as the greatest city in the world. We took it by force from the Aztecs long ago, but turned it into something very beautiful. The Notre Dame, the Hagia Sophia and the pier with the ten pin bowling. 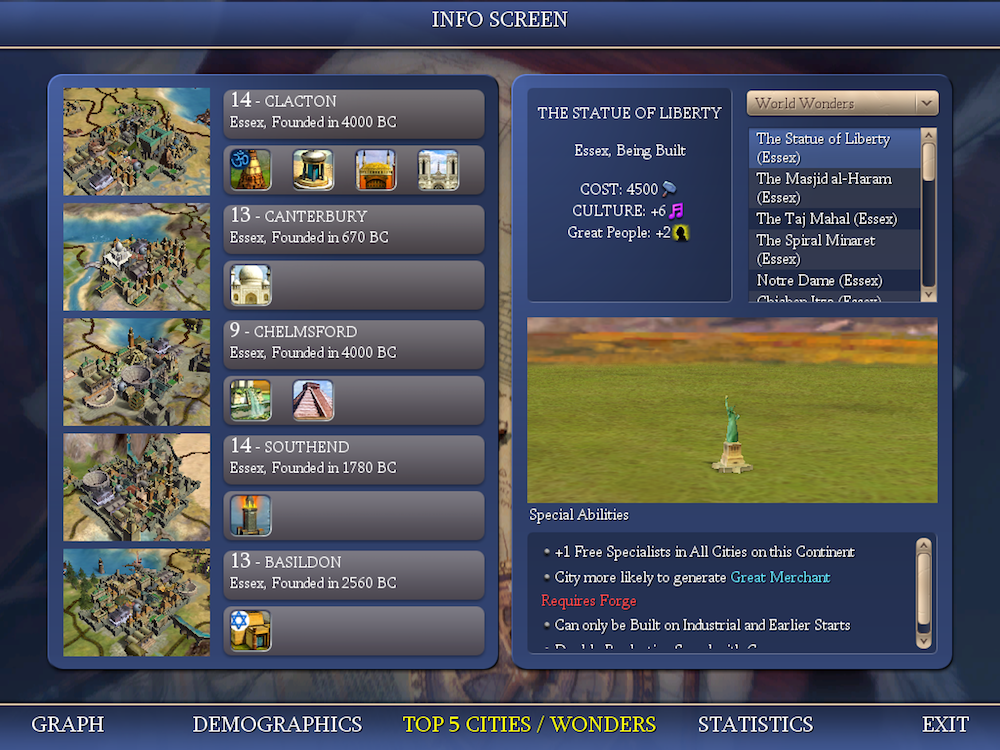 I am a little miffed not to have finished higher up the scoreboard than this, but you know what? Anything above Dan Quayle is generally considered a good result in these parts.

And there it is. The end of Civilization IV as we know it.

The French are still alive, as are the Mongols, the Indians and the Aztecs. But I believe that they have learned a very important lesson about the nature of power. As the years pass and new generations grow to replace those who have fallen, the world will speak with a broad Essex accent. That is my legacy and yes, you are welcome. 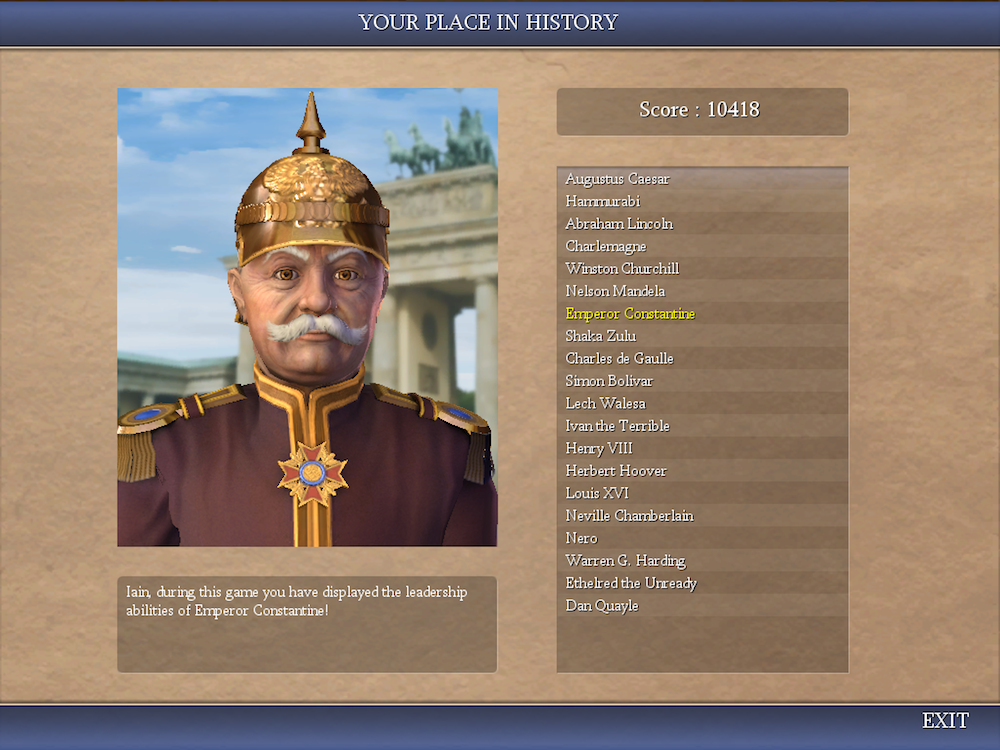 This ridiculous farce was played out on Civilization IV, released in 2005, but still available on Steam and still gloriously playable even with the lowest spec machine. I’m playing a random Terra map (one continent where everyone starts, but there’s another mystery one out there across the ocean) on Marathon speed at Prince level.