Can a man who failed so miserably with Everton perform any better when bestowed with immortality and granted complete control of an ancient society of hunter-gatherers? Will he win the space race or will he be crushed between the French and the Mongol empires? Find out now in the series that is starting to feel like an allegory for something else.

Episode 1 (Birth of a Nation); Episode 2 (The Race for Copper); Episode 3 (Love Me Tender, Love Me Dead); Episode 4 (The Hills Are Alive With The Sound of Screaming); Episode 5 (He Would Do Anything For Chelmsford. Including *That*); Episode 6 (On My Signal, Unleash Montserrat Caballe); Episode 7 (War Is Over. If You Want It…); Episode 8 (Behold, The Hanging Gardens of Chelmsford); Episode 9 (Hans? Are We The Baddies?); Episode 10 (The Essex Superstate Takes Shape); Episode 11 (You Cannot Kill Keith Richards); Episode 12 (I Still See Gandhi’s Face At Night When I Close My Eyes); Episode 13 (For Some Reason, The Natives Resent Colonialism); Episode 14 (Lemmy Crushes The Resistance); Episode 15 (Soon I Will Be Invincible) ; Episode 16 (You Should Not Have Lent Me That Napoleon Biography) 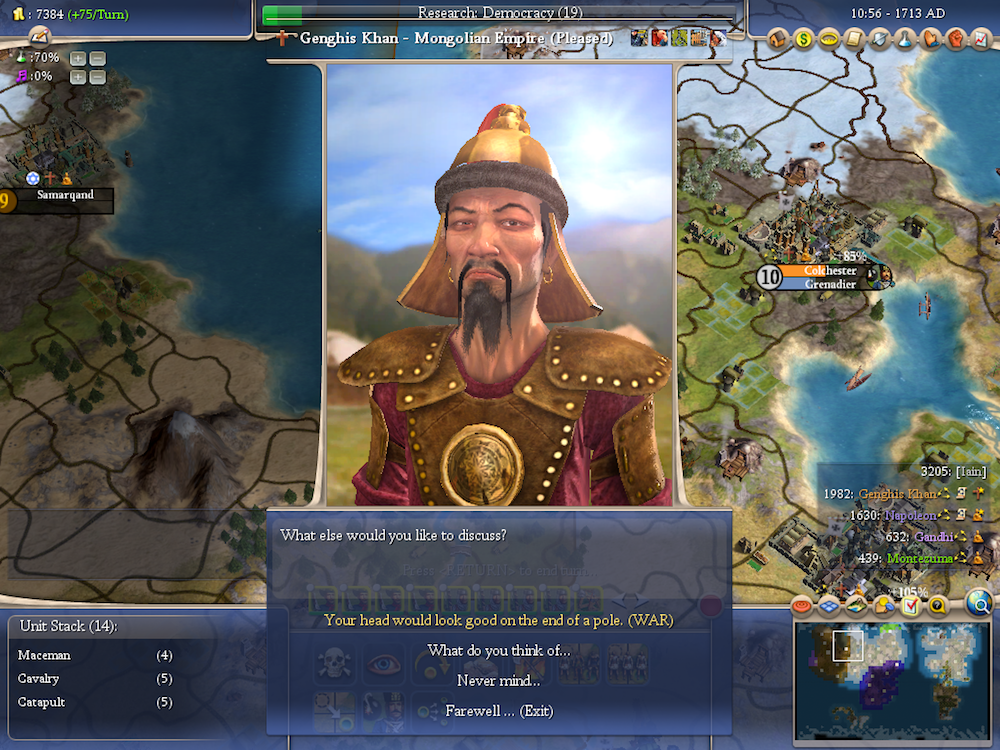 And so it begins. Our surprise is total. Genghis was initially pleased to see our ambassador, but he’s certainly not pleased to hear what he has to say about poles. The full weight of the Essex war machine is about to drop right on top of his head.

Attack Group 1 move into the forests near Beshbalik – securing them will minimise the effect of any counter-attack. I realise to my horror that I’ve dropped a bollock already by failing to move Attack Group 2 into a position where they can immediately secure the even safer forested hills to the east of Karakorum. That’s an inexcusable error. 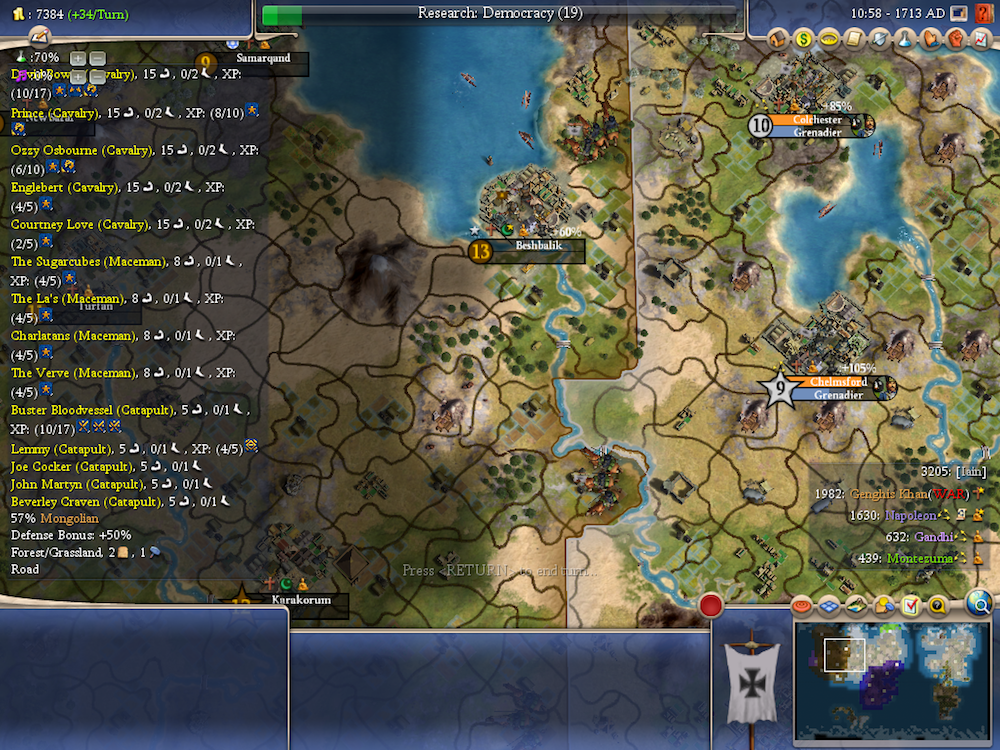 Further to the south, the HMS N.W.A begins the bombardment of Old Sarai while Attack Group 3 move into position. They’ve taken an elevated position as well. As Meatloaf, Gods rest his soul, once said, two out of three ain’t bad. Christ, I miss him. 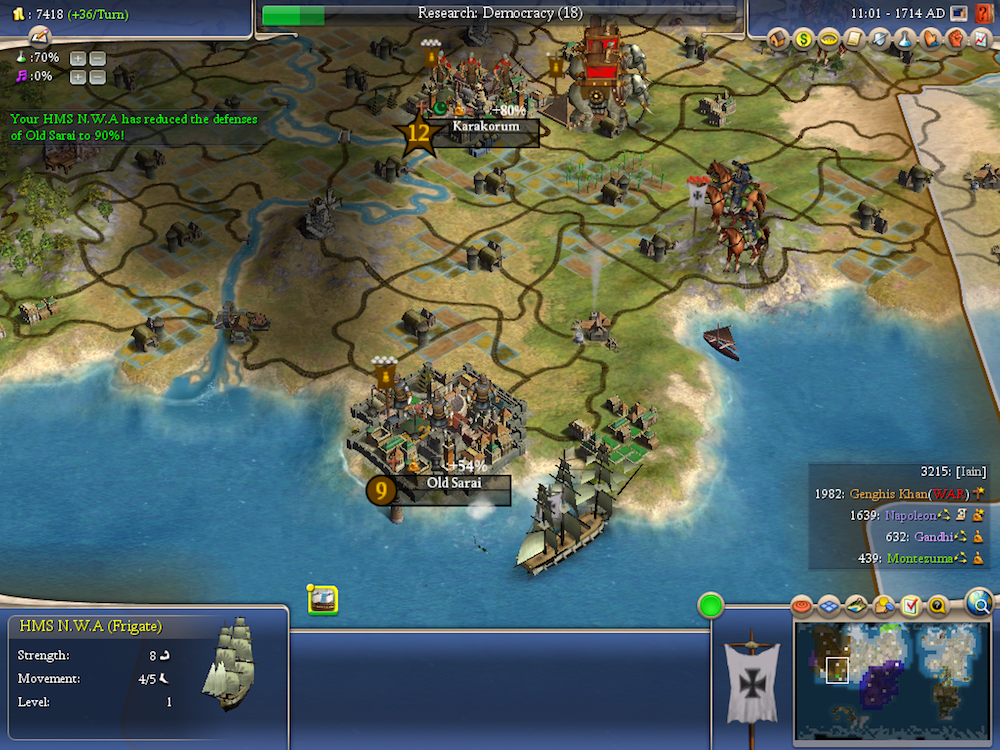 There is no serious Mongol counter-attack. A single elephantine unit approaches as Attack Group 2 finally takes a secure position. I think, on balance, that we can probably take them. 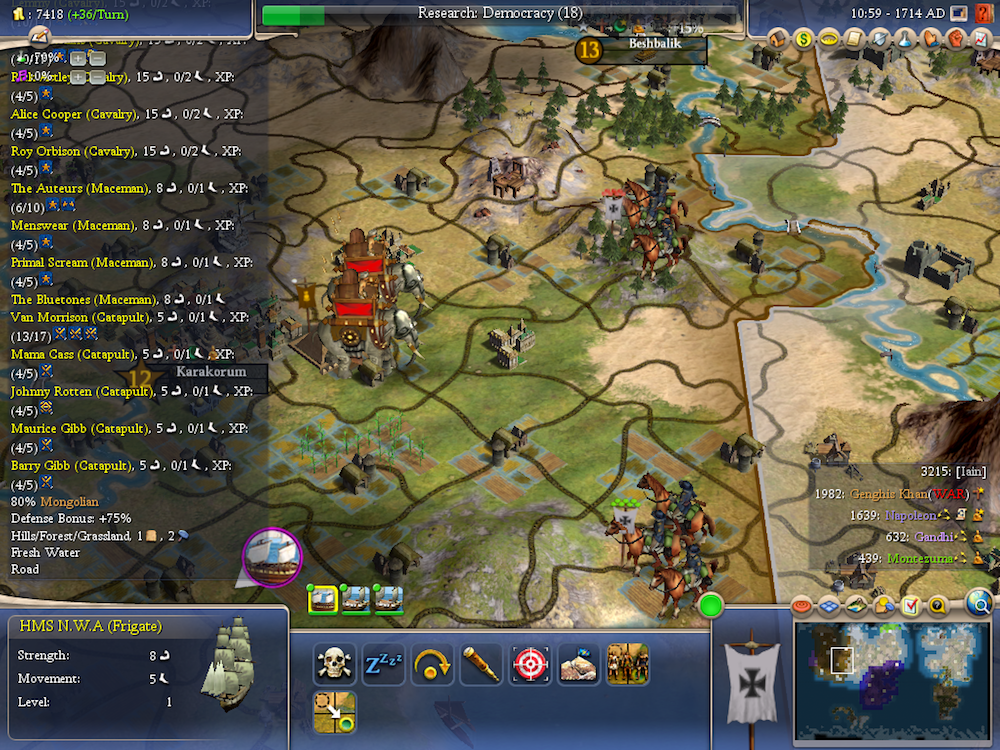 Meanwhile, the bombardment of Beshbalik begins in the north. Beverley Craven completes the brutal assault that leaves their city in ruins. With no city walls and a defence made up almost entirely of longbowmen, this really shouldn’t take long. 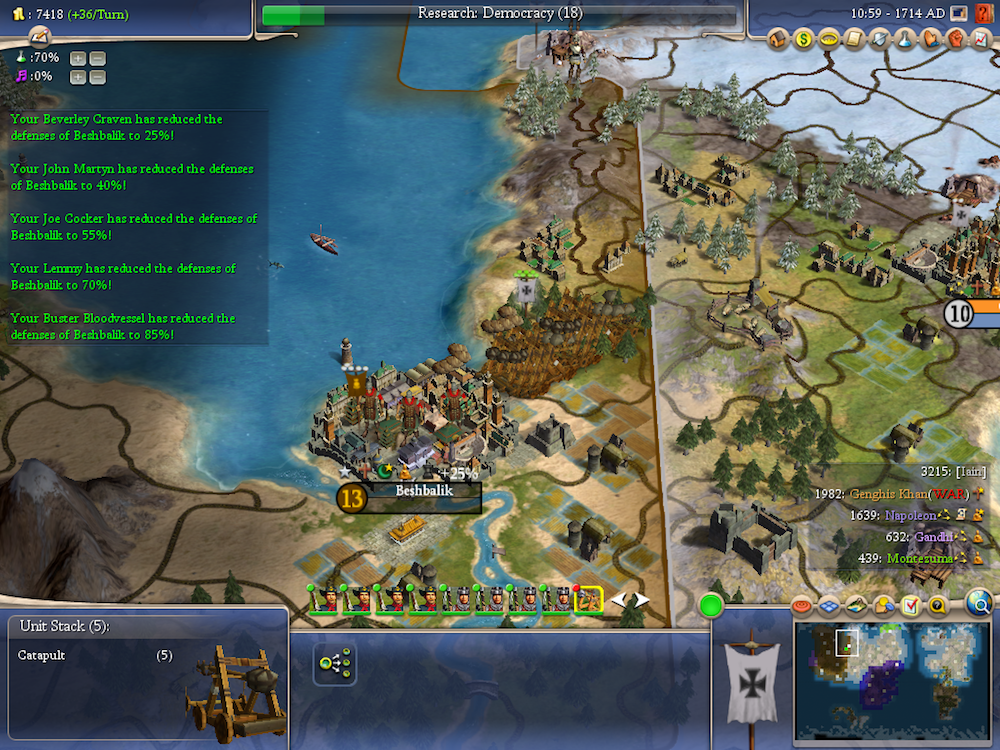 That single detachment of Mongol elephants wisely evades Attack Group 2 and makes a bee-line for Southend. But this is where Genghis discovers the last part of the maskirovka.

Just before we completed our attack groups, the Essex boffins made significant advances in chemistry. The more eagle eyed of you may have noticed that we’ve been building Grenadiers for the last decade or so, twice as strong as swordsmen, 50% stronger even than macemen. And definitely stronger than elephants. Iron & Wine delivers his delicate, acoustic meanderings with deadly force. 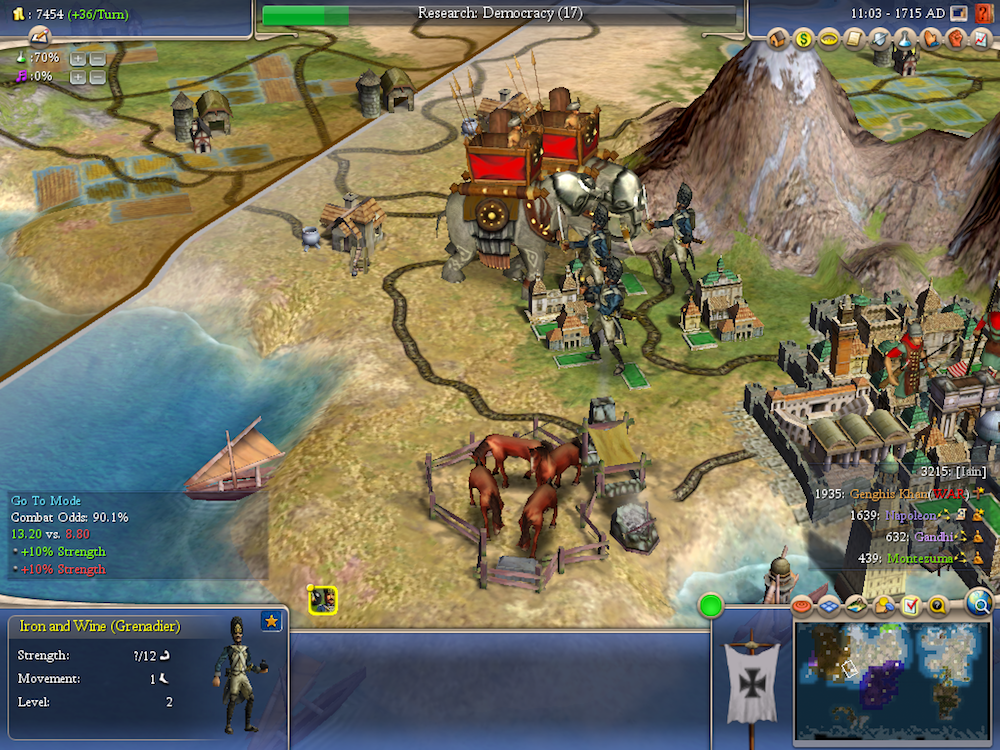 A group of musketeers make a break for it out of Beshbalik to try and outflank us, but to no avail. David Bowie’s cavalry unit cuts them down easily. 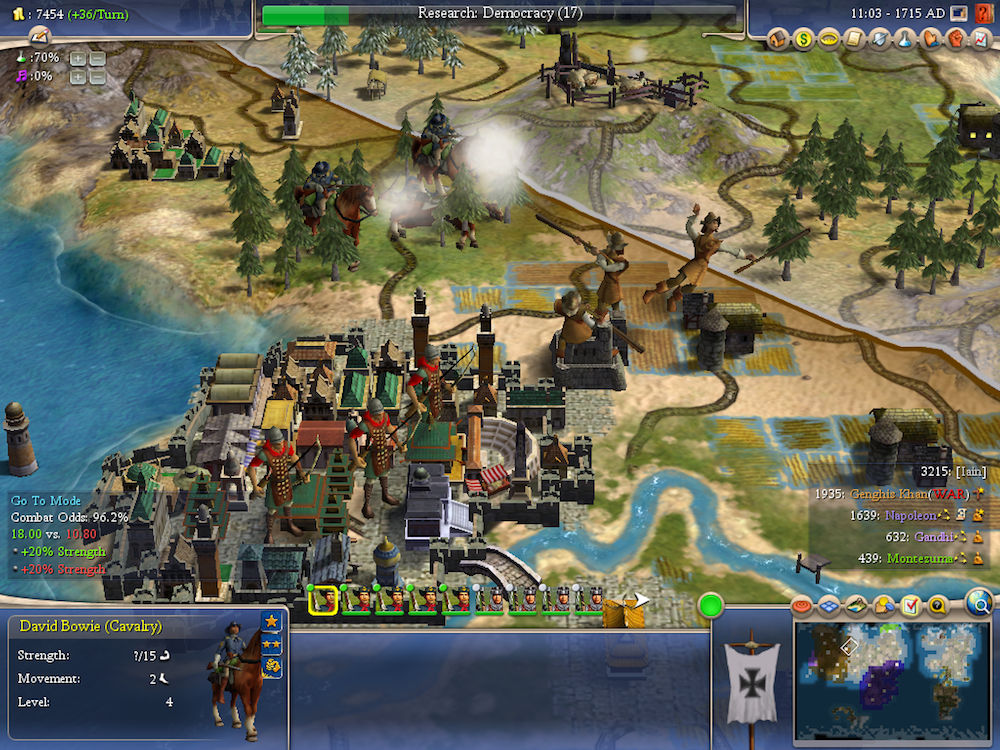 It falls to Courtney Love to complete the rout. We take Beshbalik without losing a single unit. Quickly, I move my troops into the city to rest and recover. I’ll need them again soon. 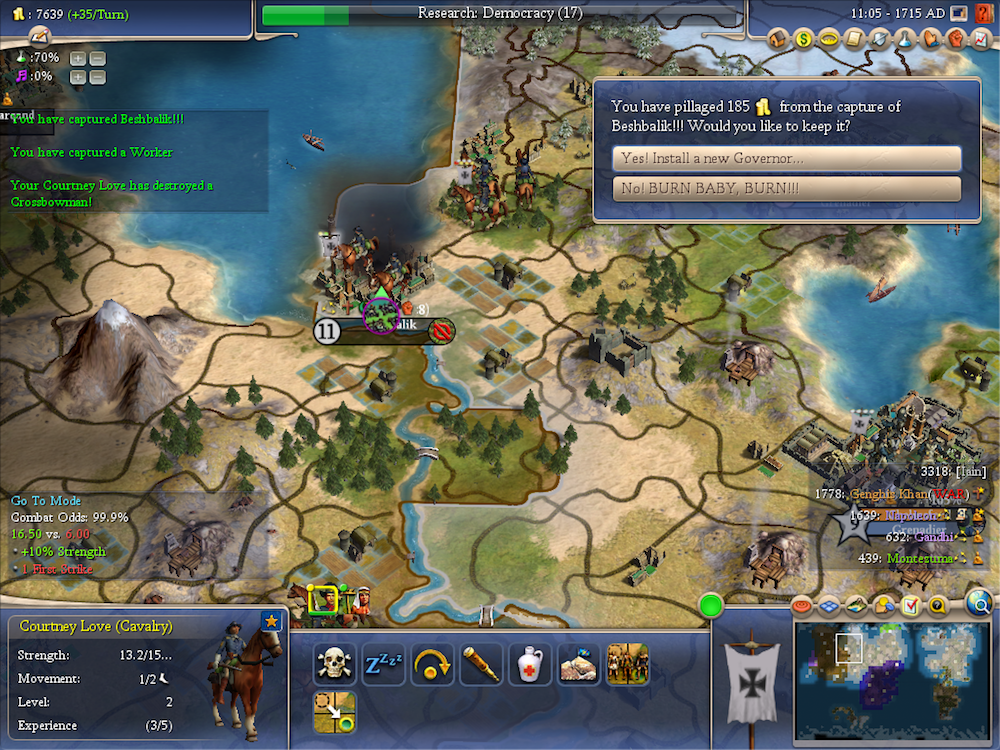 Down in Old Sarai, the Mongols mount their response, bombarding my men with their catapult. This is the risk of sending stacks of units into the same space. One bombardment can reduce all of them to a level that can ruin any hope of launching an attack. On this occasion, we suffer damage to six units. 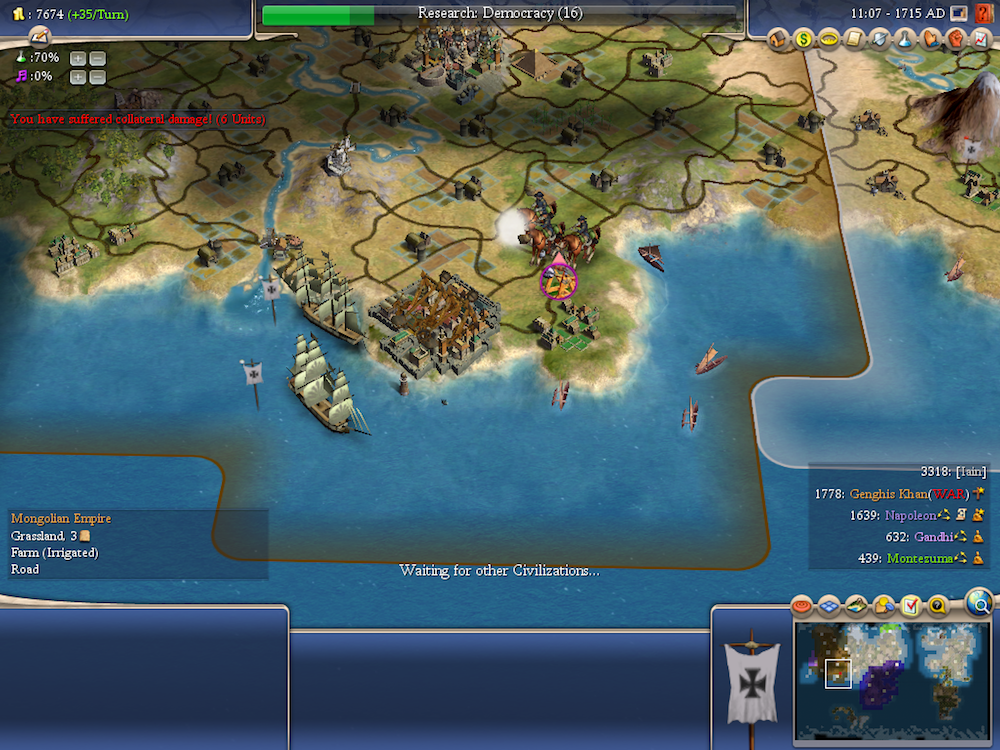 The city elders of Old Sarai are far smarter than their compatriots in Beshbalik. They have taken the time to build walls and that means a far more difficult siege. I wish that I could report another flawless engagement, but tragically we lose Monkee Mickey Dolenz in the assault. He will be remembered. 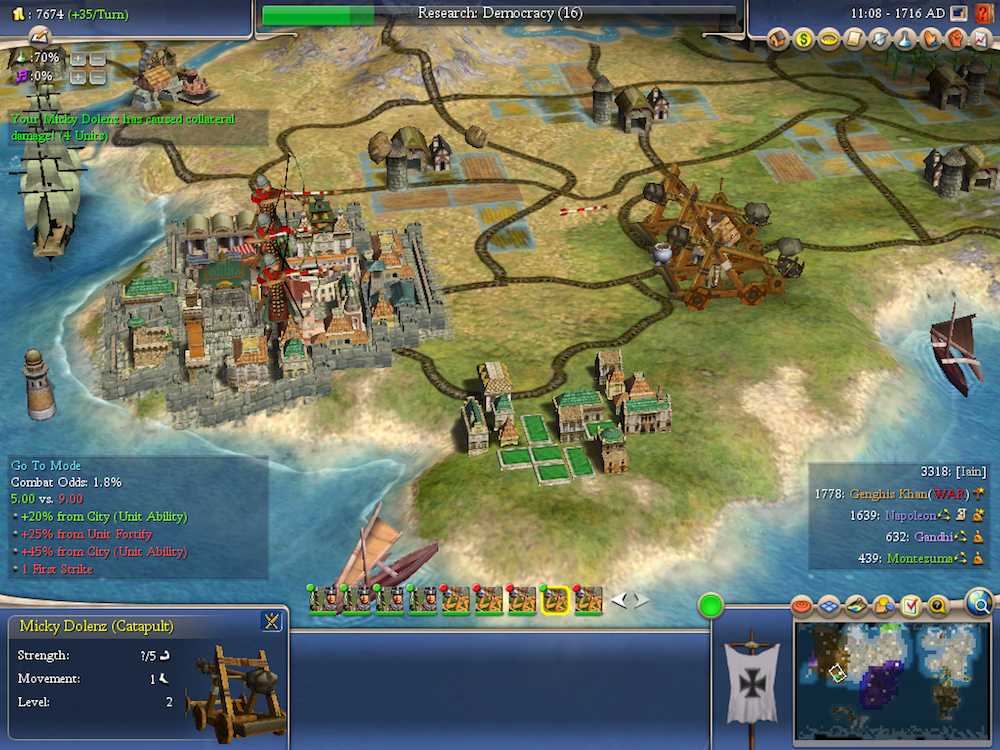 But he does not die in vain. Old Sarai falls under the attack of veteran outfit Sleeper and we claim our second Mongol city. 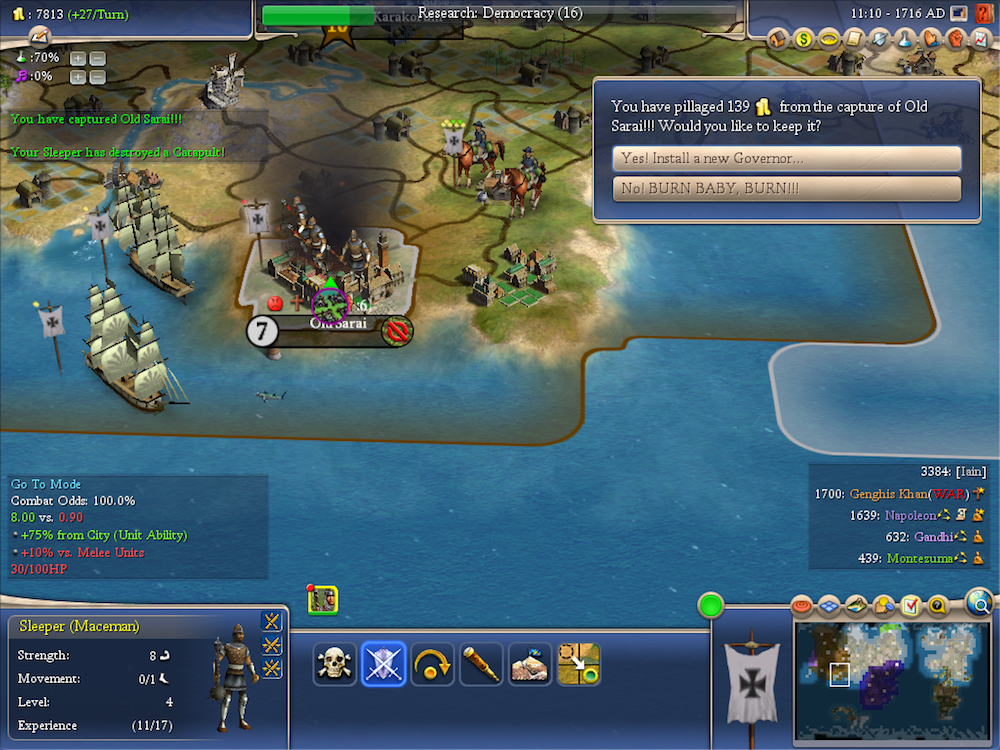 In the meantime, as Attack Group 2 approaches the capital city of Karakorum, the Bluetones detach and destroy the copper mines. It’s a small thing, but it reduces the industrial output of the Mongols and further reduces the chance of a damaging counter-attack. 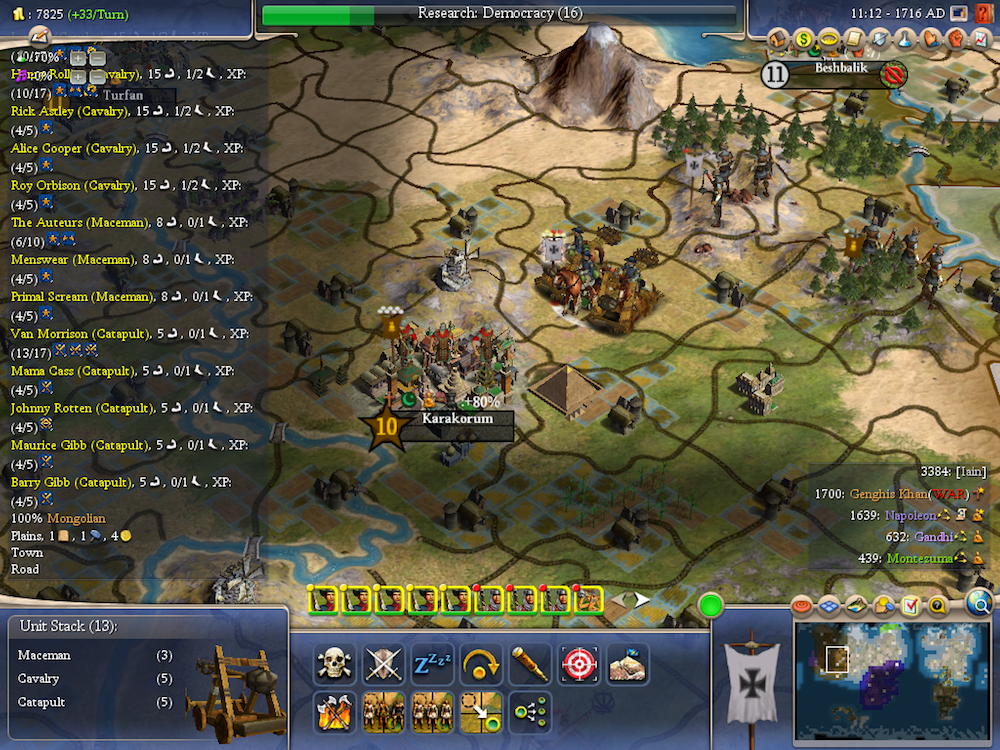 This war is not fought exclusively on land. There are two Mongol caravels hassling my coastline in Kent and so I send the galleons to intercept and destroy them. But after all the success on the mainland, we suffer our own Graf Spee moment when we lose the HMS Cypress Hill to the weaker opponents. That’s a bit embarrassing. 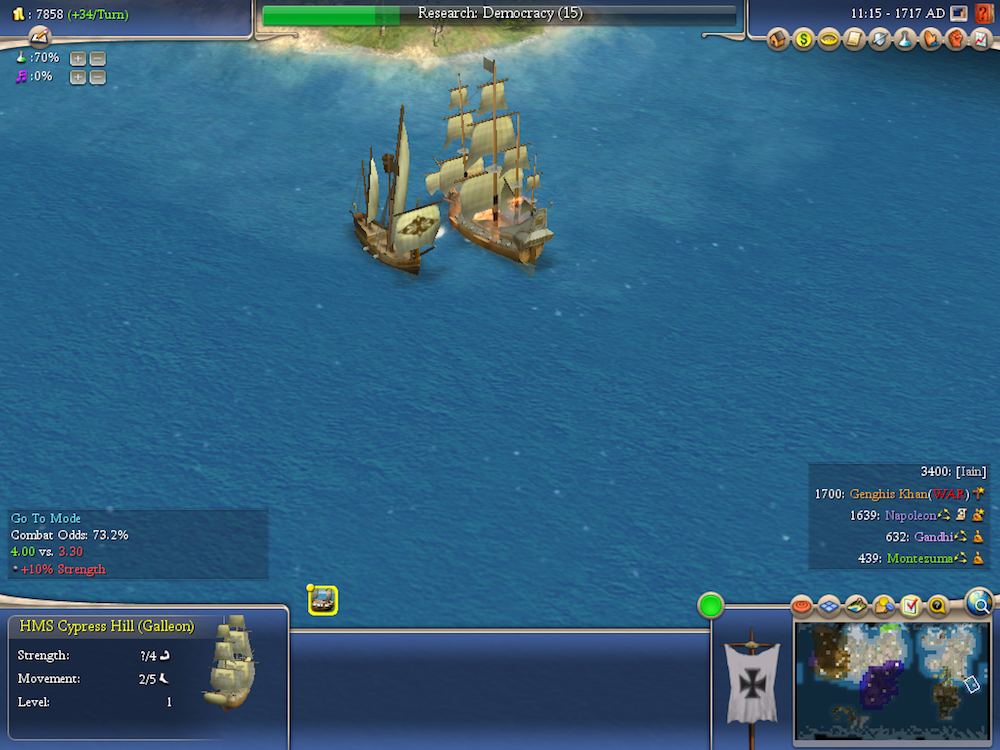 But the Mongol joy is short lived. The HMS Wu Tang immediately sweeps in to deliver bloody vengeance. 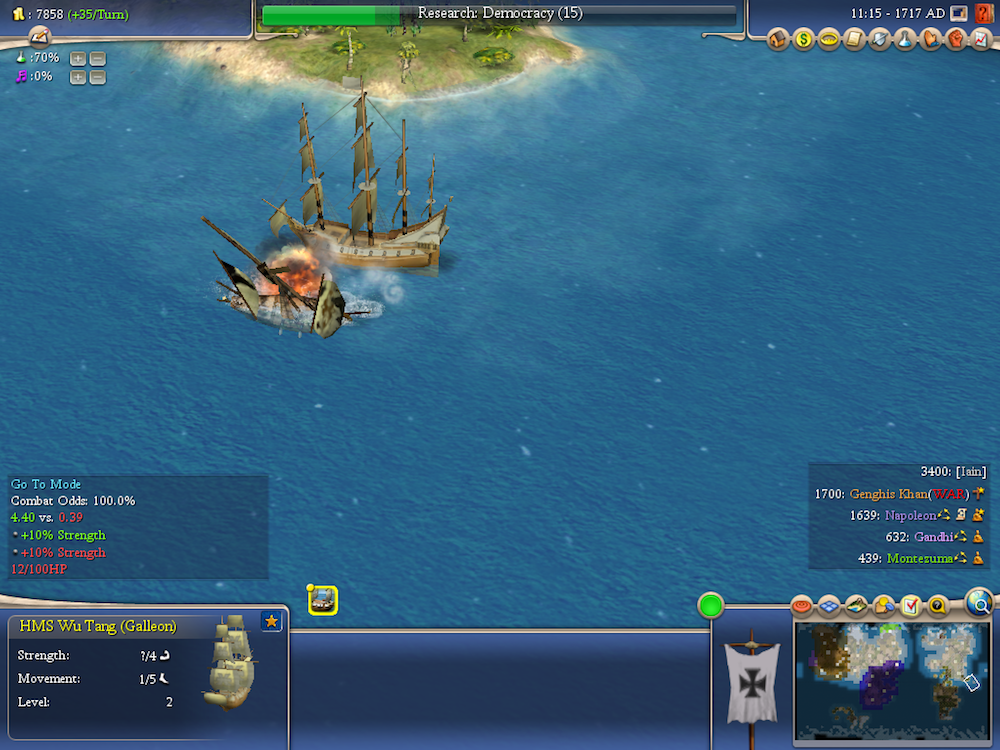 With Old Sarai down, it’s time for the sweep of this Essex Schliffen plan to take effect. The HMS Sugarhill Gang and the HMS N.W.A begin a combined bombardment of Ning hsia. 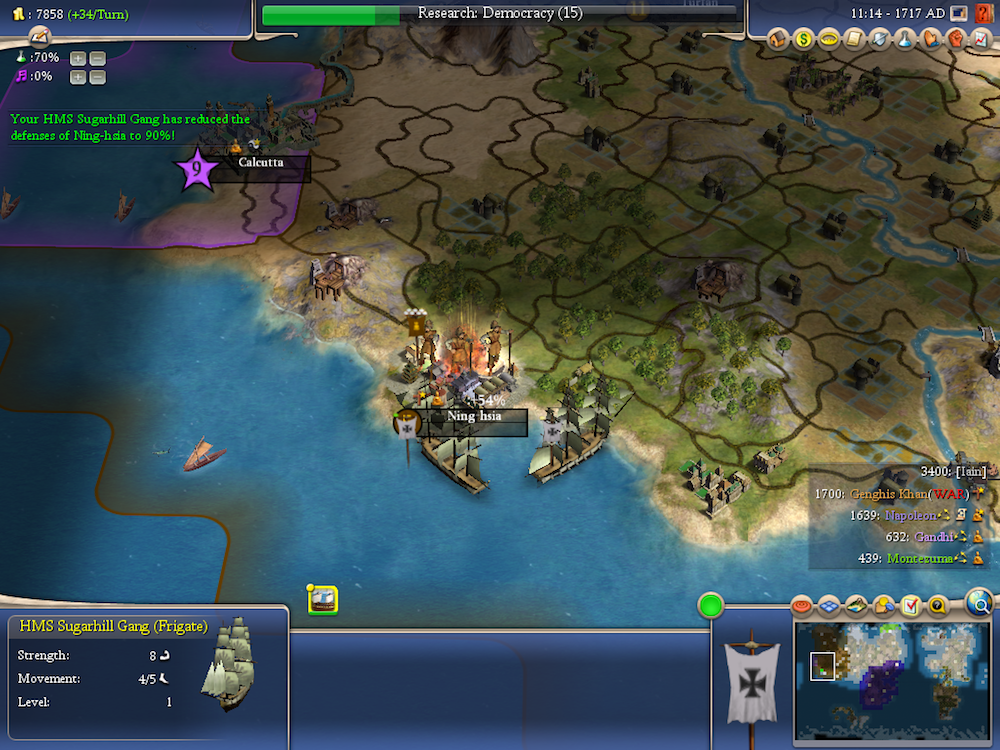 The Mongols do land their blows from time to time and you have to salute their tenacity. A unit of macemen cross the border and destroy a workshop. They too are vanquished by the surprisingly ruthless Iron & Wine. 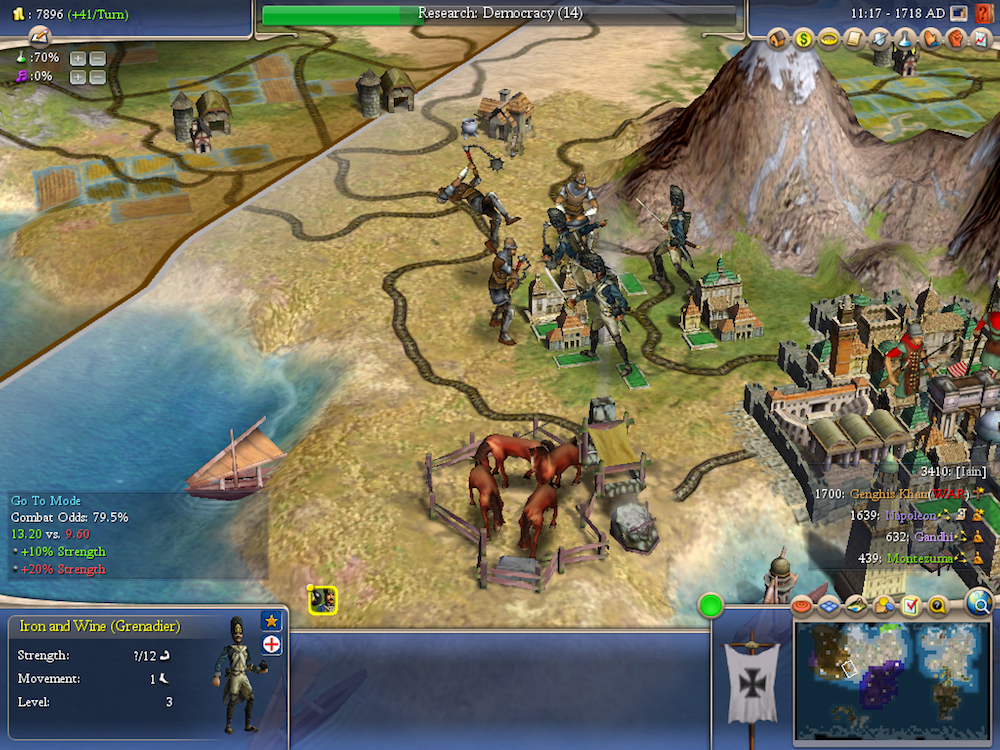 By 1718, we reach the outskirts of Karakorum, the jewel in the crown. Built on a tall hill, it’s not an easy city to take. Regrettably, we lose Van Morrison in the initial attack. But not before the big man lands some heavy blows on those archers. 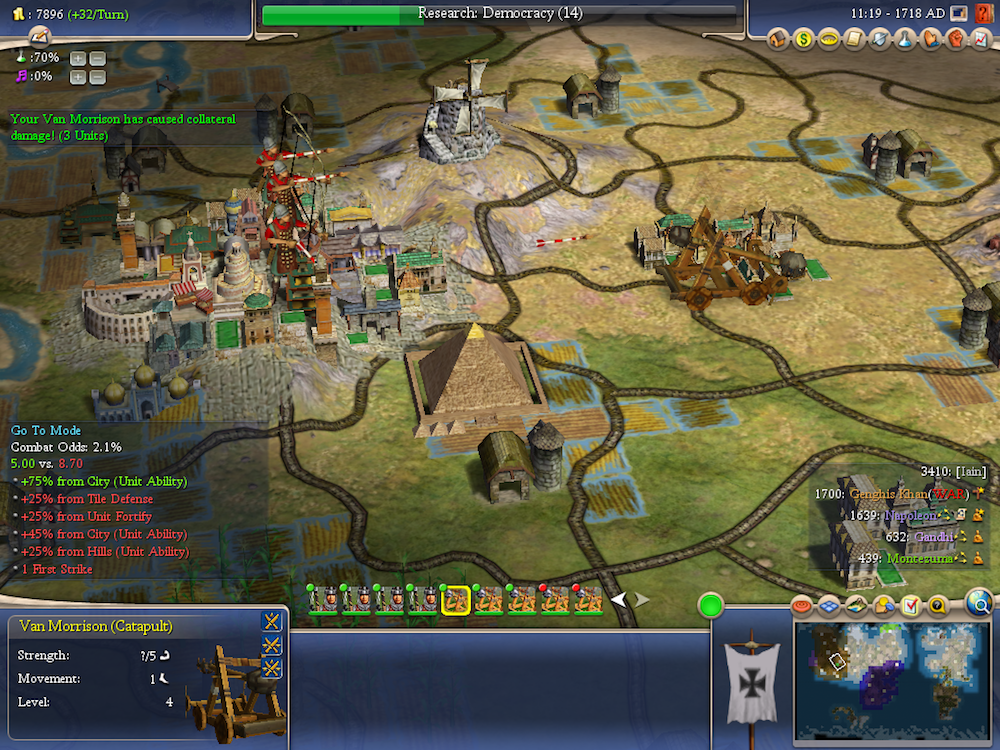 The HMS Public Enemy continues the pursuit of that last Mongol caravel and sinks it as a group of Kentish workers look on in delight. 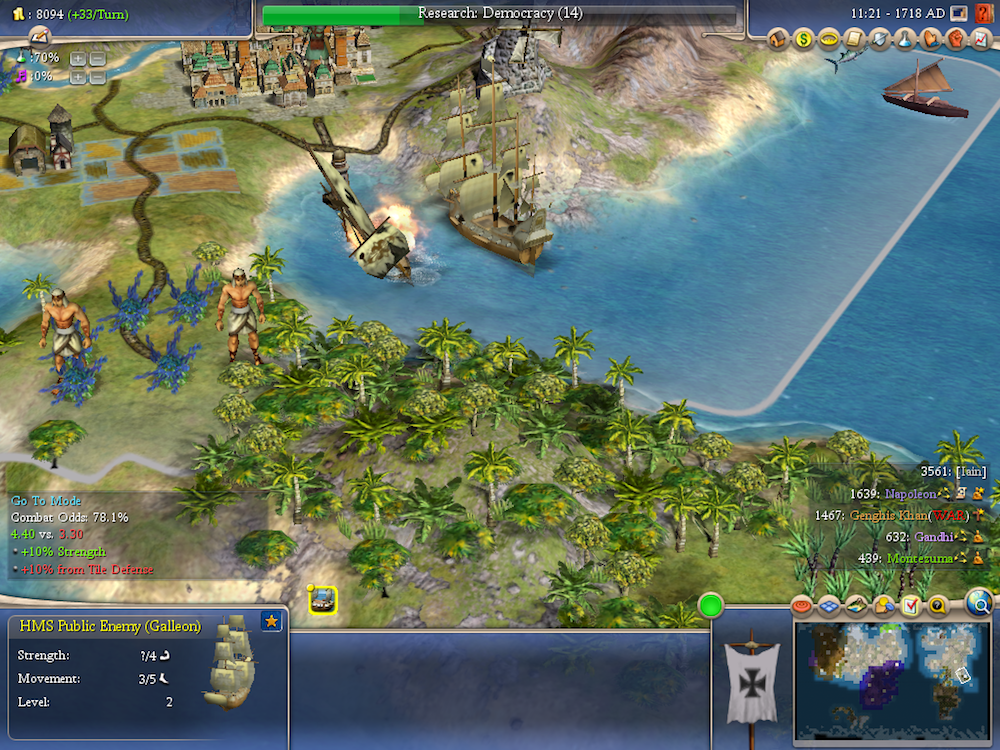 And then, finally, Karakorum falls. As Attack Group 3 accelerates towards Ning hsiu to complete the job, the Mongols are in disarray. We’ve taken three cities, slaughtered entire armies and we’ve only lost three units in doing so.

I would expect the French, given their lack of response, to view this as a fantastic opportunity to fill the power vacuum. I would expect them, now that I’ve traded them the ability to build galleons, to be diverting all their resources to the colonisation of the land that we have left bare in the New World. They will have watched this war from afar and considered themselves the beneficiaries. They are not the beneficiaries. 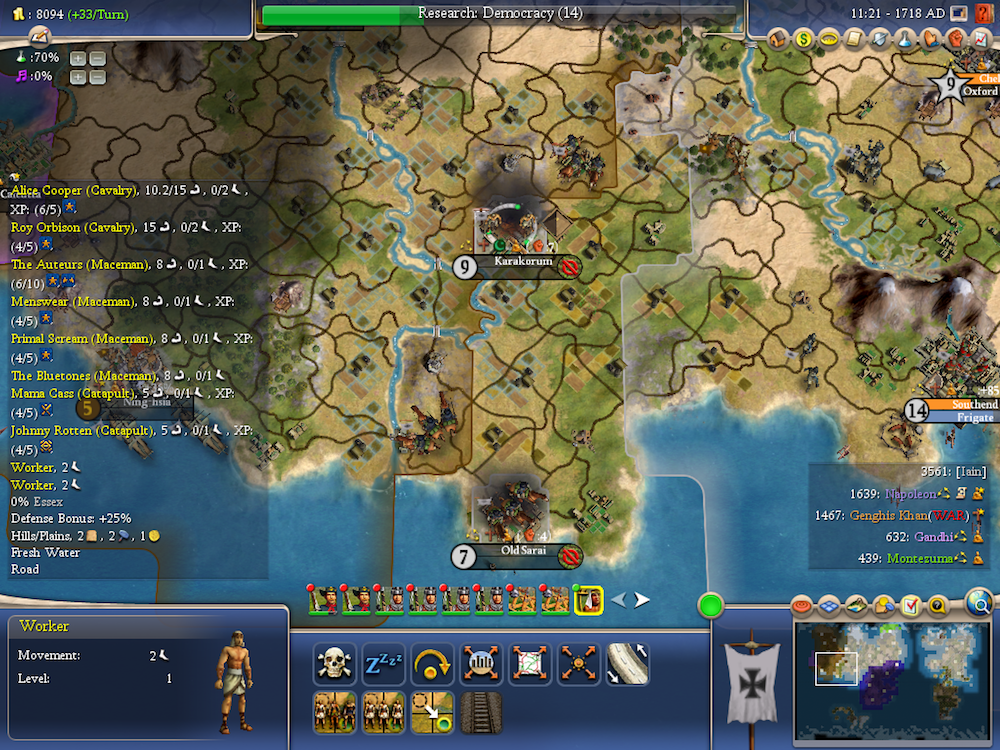