Can a man who failed so miserably with Everton perform any better when bestowed with immortality and granted complete control of an ancient society of hunter-gatherers? Will he be wiped out in 2000 BC by the Aztecs? Find out in a preposterous exercise that somehow attracted enough readers last time to warrant a second episode.

And when Damon Albarn saw the breadth of his domain, he wept. For there were no more worlds left to conquer. Like Alexander the Great, however, Damon is wrong. There *is* a new world out there somewhere across the impassable ocean. Sadly, we won’t know anything about it until we discover optics (as in telescopes, rather than improvements for the palace bar) and build a caravel. But we’re a long way from that day. Right now, our boffins are in a field, aiming arrows at a nearby tree with only mixed success.

Albarn’s not entirely wrong, mind you. We have pretty much explored the entire continent. We have Mongols to the left of us, Aztecs to the right and here we are, stuck in the middle with rudimentary hand tools. The Indians seem nice, they’re off to the south-east and below them are the French. The less said about that lot, the better, mind. 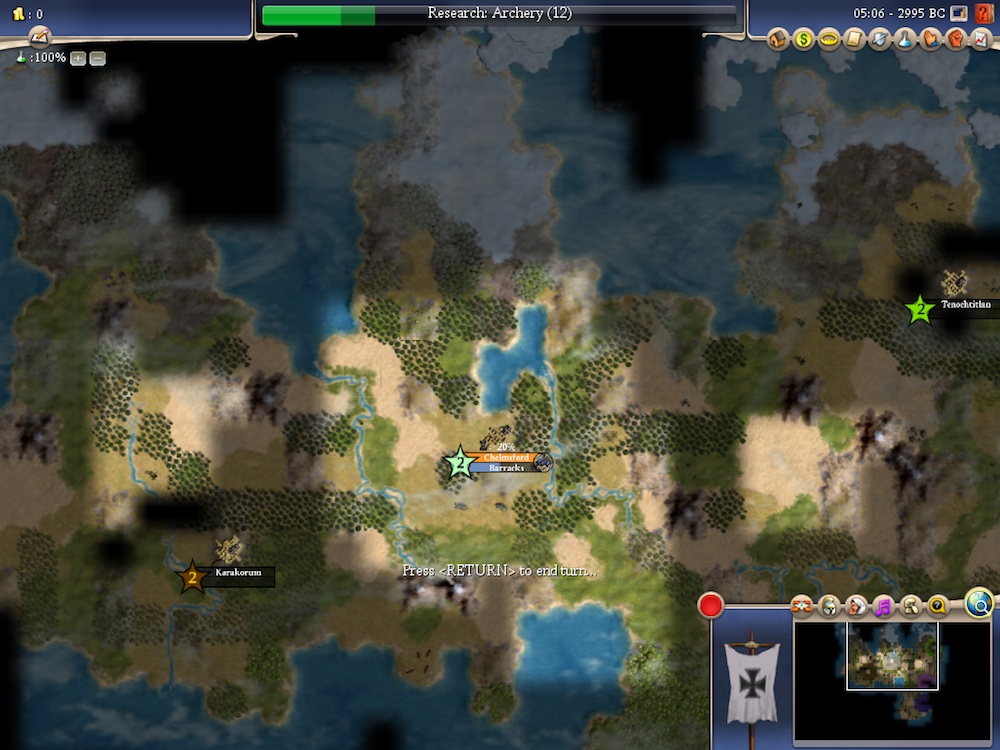 Now that we’ve invented writing, we can sign open borders treaties with our neighbours, allowing us free passage through their territory and encouraging trade and the propagation of new ideas. I am all for that, but not with the fucking Aztecs. I only have three rules in my life: Never drink in a pub with a flat roof; never eat meat that is only described as, ‘meat,’ and never, ever, ever sign an open borders treaty with a man who wears a skull as a hat. 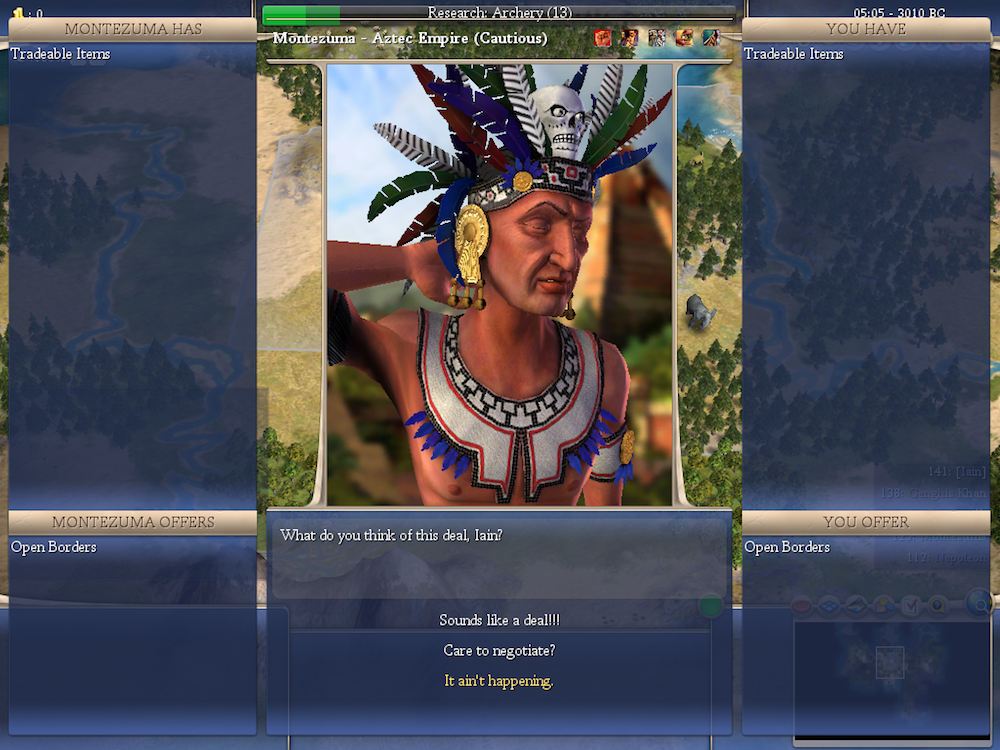 Everyone else is cool though. Especially Gandhi. I wish he lived next door. He looks like the kind of chap I can trust not to come storming over with a load of catapults for no discernible reason. We’ll sign deals with all of the other nations (I still don’t know where the sixth civilization is, I’m sure I selected six) and send Elvis Presley to every capital for a cultural exchange of songs and cheeseburgers. 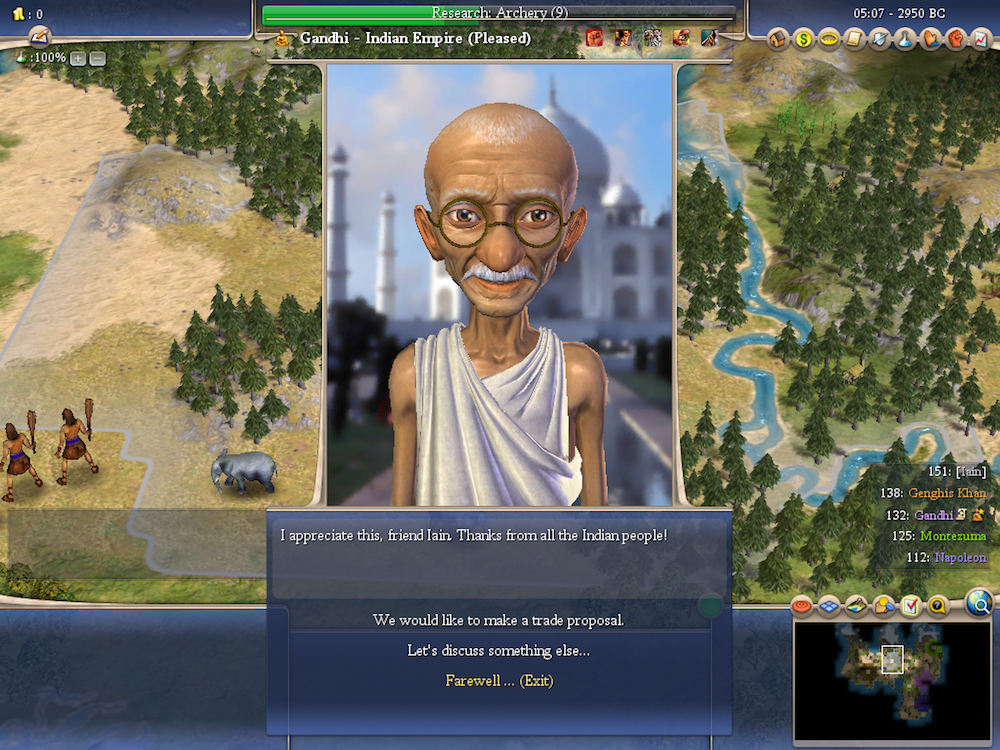 Now in real life, mankind has matured and developed to a point where religious differences aren’t really seen as differences at all. I mean, we’re all just people, right? We’re all happy to let each other worship in whatever way brings them comfort? Of course we are. But in Civilization IV, as ridiculous as it sounds, religion can be a real bone of contention.

Indeed, sometimes people will even go to war over religious differences. That’s why I’m concerned to see that Montezuma has just got into Hinduism in a big way. Because now he’ll hate anyone who doesn’t worship with him. And Gandhi, who I like to consider my best mate in the game, is a Buddhist. Because of our open borders deal, Buddhism will probably be the dominant religion in Chelmsford before long. So, you know, there may be trouble ahead… 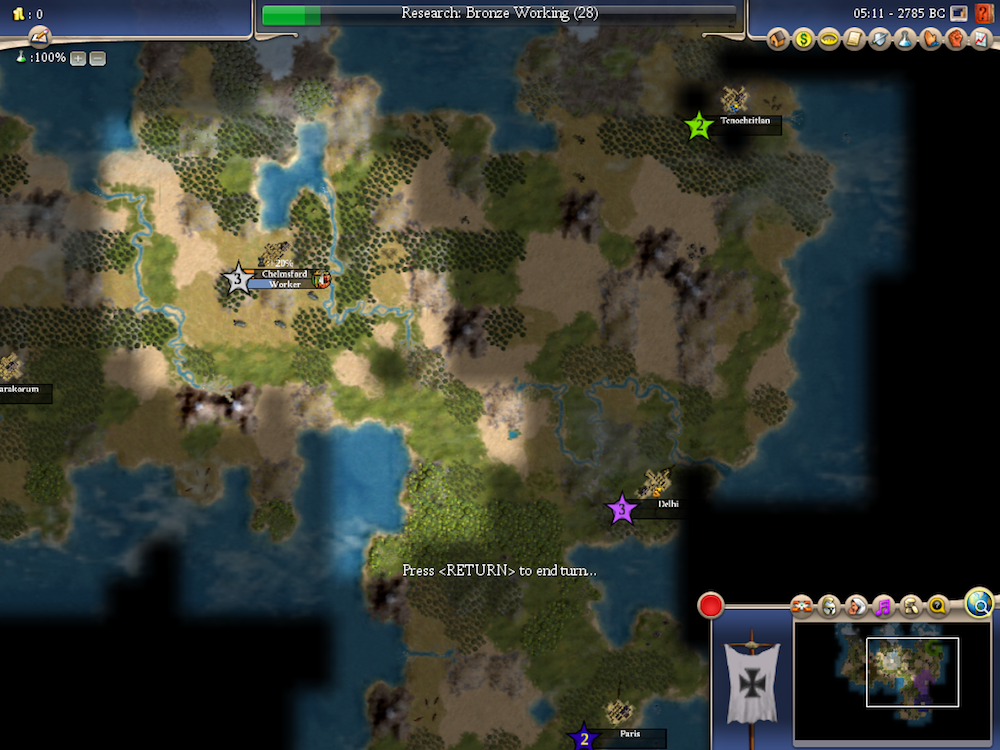 If I can get a load of those axemen together, I’ll have an army capable of repelling anything that anyone can throw at me. I won’t be able to take cities (at least not without serious losses) until I invent catapults, but I can certainly keep my borders clear. It is possible to survive without copper (or iron, which appears later), but you need a lot of archers, a lot of luck and all of your rivals to find something more interesting to do than invade your lands, steal your money and ravage your elephants. And there isn’t much more in this world that’s more interesting than a night out like that. 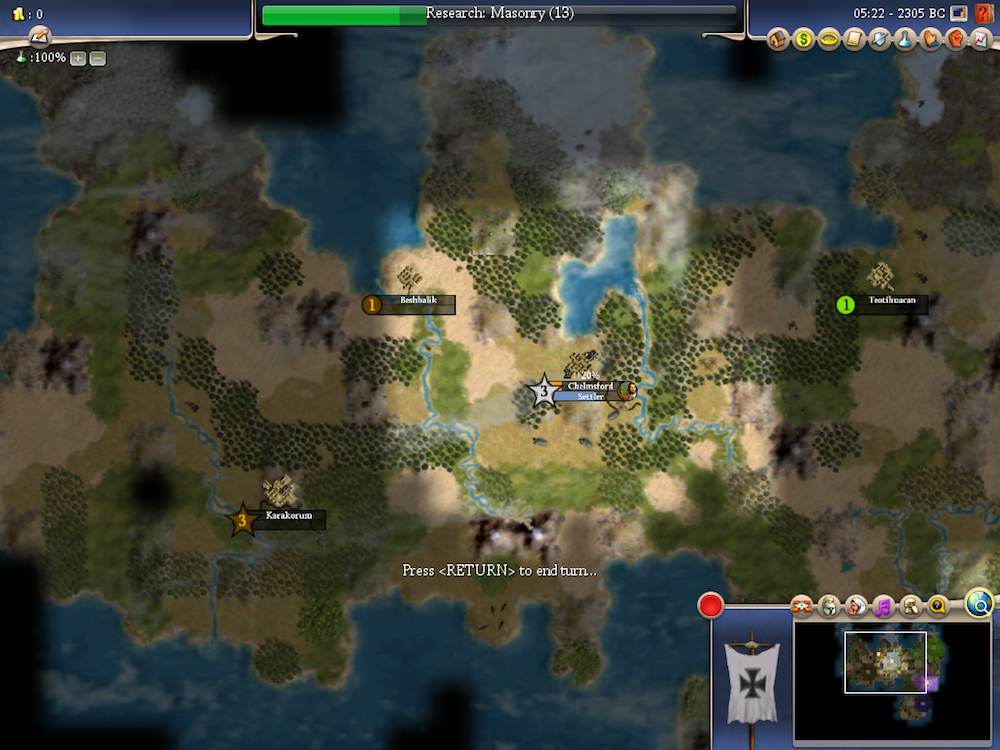 But it seems that there’s one bit of good news and three bits of bad news. A game-changing deposit of copper is within reach (good), but it’s too far to the north for us to secure (bad). We must expand and build another a city; a city devoted to the acquisition and refinement of that copper. And we have to do it quickly because the Aztecs have built a new city to our east (badder) and the Mongols have another to our west (badder still).

And so we prepare a settler unit; a band of plucky adventurers tasked with building what, with a little bit of luck, will one day become the mighty city of Colchester. Around us, y’see, the world is shifting. Elvis’ reports from the road are now filled with stories of expanding empires and new cities. Given the crippling inevitability of a war between ourselves and the Aztecs, I’ve broken my third rule of life and signed an open borders treaty just so that I can scout their land for weak spots.

And what a good job that I did. Because they have copper too. And it’s right next door to their capital. Oh, and look there, on those hills between Beshbalik and Karakorum. The Mongols have got copper too. Fantastic. Everyone’s tooled up. If I was Gandhi and Napoleon, I’d keep my head down. This is going to get proper naughty in absolutely no time, you see if I’m wrong. 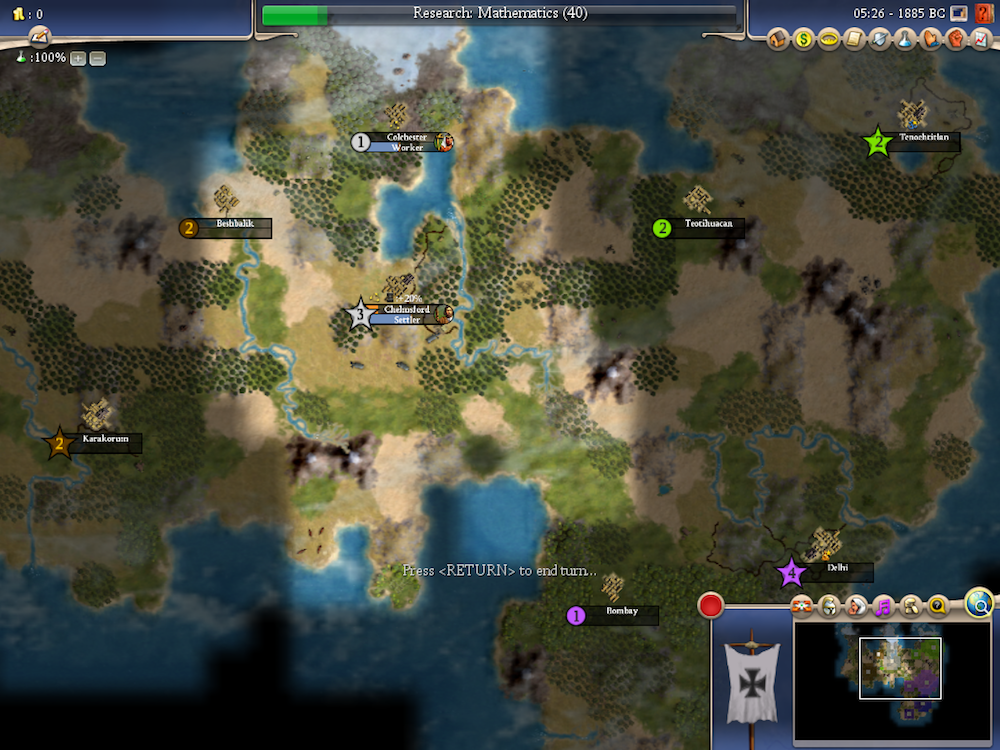 So what’s my plan? Well, I’m glad you asked. My plan is to build a third city, Southend, to ensure that we have a central chunk of territory. After all, you know what they say about acquiring land: You may as well buy it, they ain’t making any more of it.

It’s an awful risk though. What I should really be doing is building archers, trained specialists at defending cities. I should batten down the hatches and prepare for war. But if I can get that settler unit out and down to the southern coast, I’ll have enough territory to make a decent fist of this. And I’ll have horses too. Horses are fun. I’ve already moved Blur down there to provide some sort of protection. They’re not archers, but they can play Song 2 really loudly, if push comes to shove. 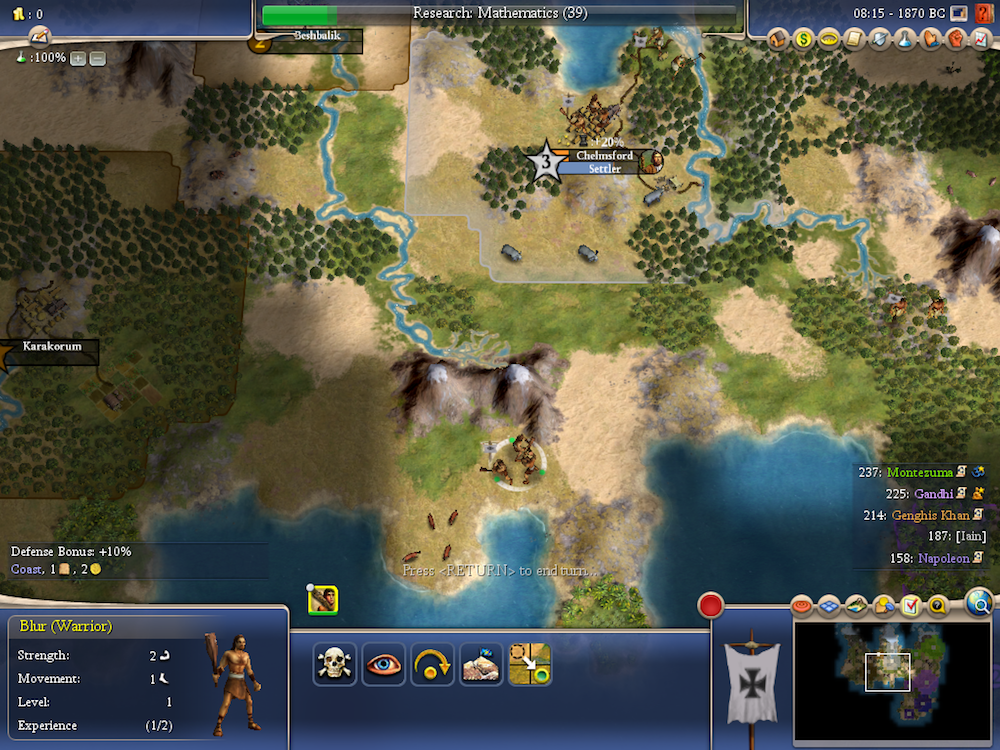 And so now it’s just a case of holding my breath and hoping that I’ve timed this right. If so, I’ll have three cities and I promise that I’ll devote the next 100 years to training archers for their defence. But if I’m wrong…oh, if I’m wrong…then this will be a shorter series than the first Everton FM17 project.