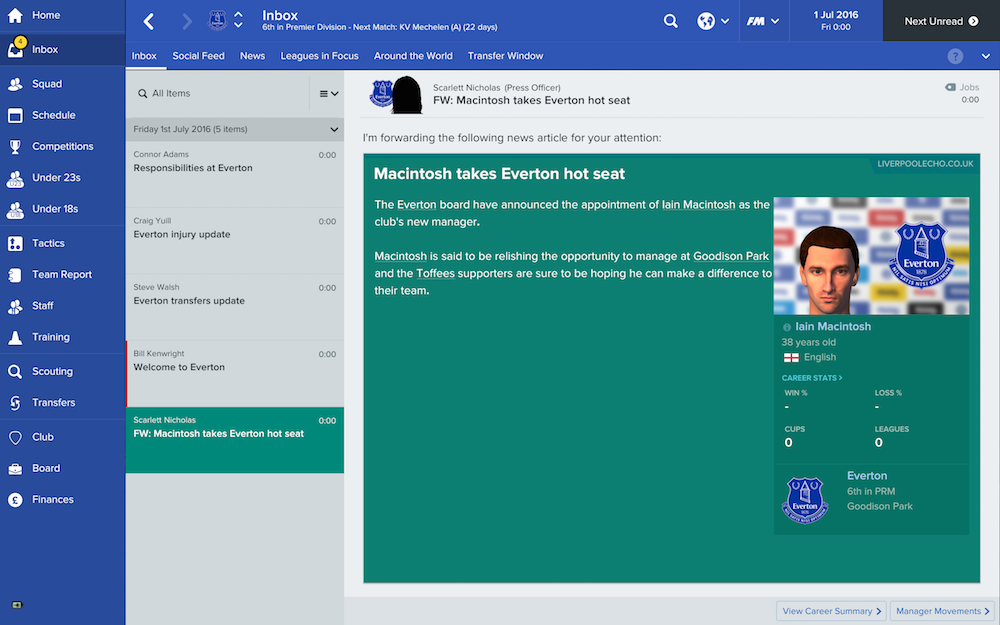 They say that you should never go back, but do *they* really know what they’re talking about? After all, it seems to be going well for Nigel Clough at Burton Albion. Tony Pulis did his best work in his second spell at Stoke City, Harry Redknapp won the FA Cup when he came back to Portsmouth and, if you’ve got an hour or so, I’d be happy to tell you about David Webb’s triumphant return to Southend United in 1988.

Okay, so there was Kevin Keegan at Newcastle, Kenny Dalglish at Liverpool, Steve McClaren at Twente and, perhaps most pertinently, Howard Kendall (twice) at Everton. But let us not dwell on such things. Just because I was a phenomenal success at Everton on CM01/02 (it was a golden age, we won a League Cup, please don’t take that away from me), it doesn’t mean that I’m doomed to failure on FM17. So fuck you, Amelia… 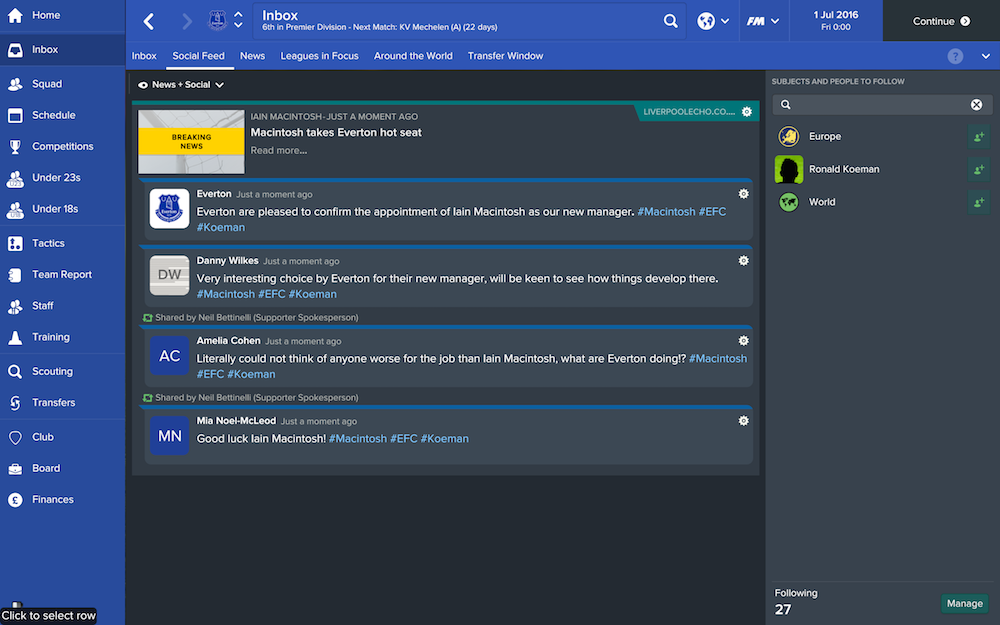 At least some people seem to have some confidence in my abilities.

@iainmacintosh I have faith, Iain and can see you being at the helm for many years. Good luck! pic.twitter.com/DpjfcNVguZ

But I’m scared. I am really scared. I must have put thousands of hours into CM01/02 and, even though I couldn’t spend money for two and a half years, I did at least have an understanding of how the game worked. I survived.

I have no understanding of how this one works. I played half a season with Southend on the Beta and it went quite well, but you can get away with a lot in League One. It will be very different here. And I’m doing it all for the first time. In public. Which means that for the first time in the 24 years that I’ve played this game, I can’t just give up and start again if it all goes wrong. This save is permanent. And, to prevent you, dear reader, from being overwhelmed with names and information, I’ve disabled the transfer budget too. No new players for anyone until January 1, 2017. 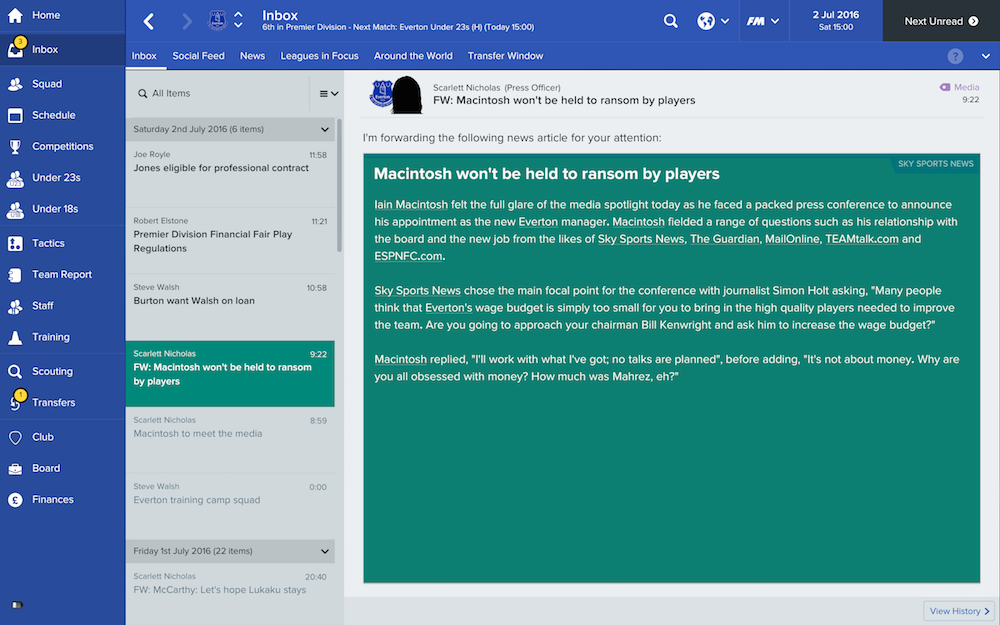 Worryingly, the club seems to be £7m in debt. And we haven’t exactly been granted the easiest start. Manchester City on the first day of the season and Arsenal shortly afterwards. I could have done without that. 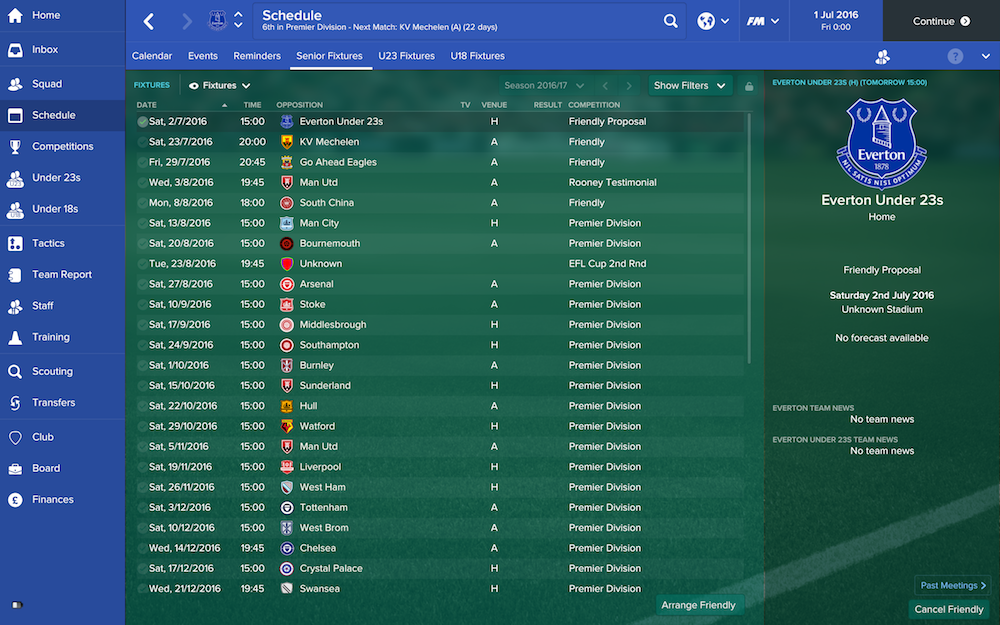 However, there are a number of things in my favour. I am (and 14-year-old me is delighted by this turn of events) literally being paid to play. That means that I can justify treating it like a proper job. I have time to do *everything*. I can scout opponents, plan set pieces, study the numbers and make sure that I don’t miss a trick. I can also call in favours from people who know more than me, which is basically everyone except my cat. Expect that process to begin very swiftly.

But where do I begin? CM01/02 was small and basic. FM17 is ENORMOUS. How am I going to do all that needs to be done? Well…pretty much the same way that you eat an elephant. You take one slice at a time. I take the laptop to a nearby cafe, get myself comfortable in the corner and spend three real hours doing stuff before I press the continue button. 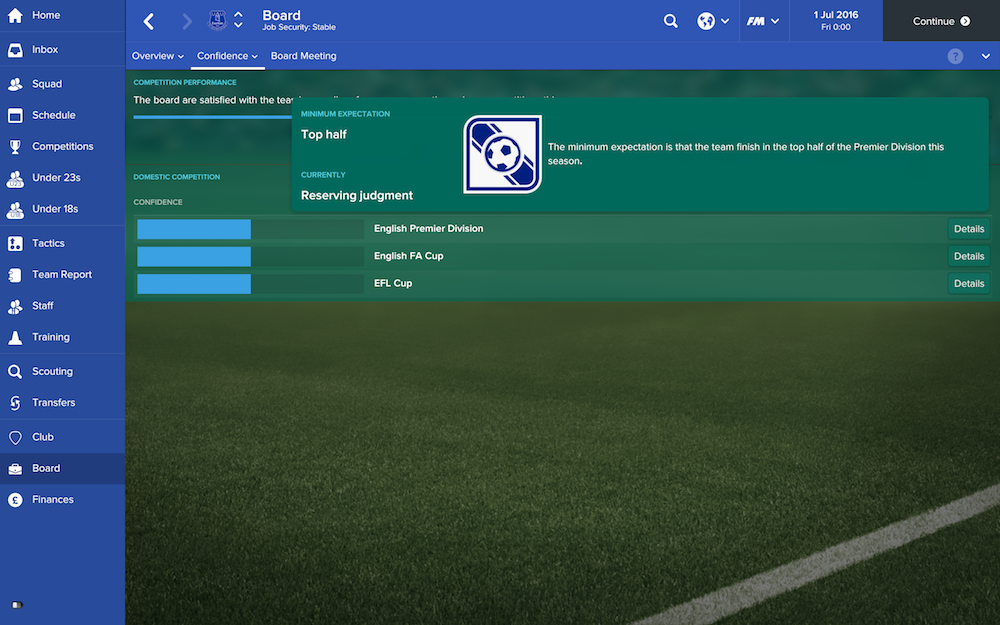 I was worried about working with Duncan Ferguson again after what happened on CM01/02, but it’s the sight of assistant manager Erwin Koeman in my introductory meeting that proves most disconcerting. After all, I’ve essentially just fired his brother from a job he hadn’t even started yet. I’d expect him to have some rather strong feelings about that. Consumed by a very English fear of confrontation, I’d like to terminate his contract and move on, but it’s a really long and lucrative contract, so we’re both going to have to get on with it. I’ll need the money for new players. In the meantime, I take the option to extend Phil Jagielka’s contract and throw down two incredible offers to Ross Barkley and Romelu Lukaku. 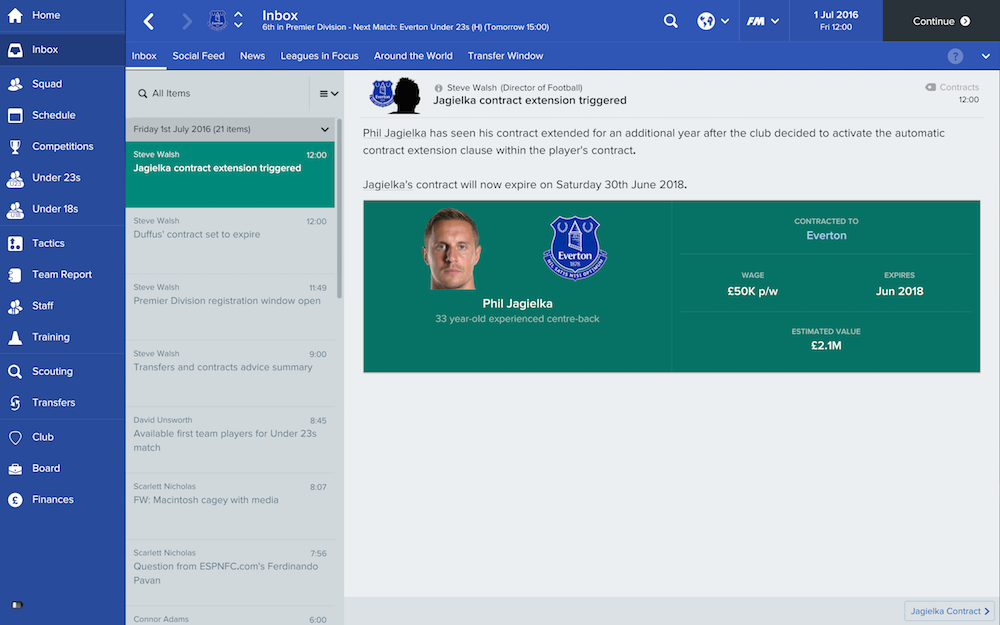 The coaching team isn’t at the level I’d expect. We can get three to four stars in every department, but no higher and I’m not allowed to hire new staff. We’re just going to have to get on with that as well and wait for natural wastage. I try to get the squad focused on fitness, I resist the temptation to impose individual routines just yet and I move on to scouting, where everyone is assigned to local patches. Call me paranoid, but I fear that we won’t be able to compete with the big boys in the transfer market, even with our new owner and his great big wallet. We need to find the talent as it develops.

I want to keep the tactics pretty simple at first. As regular readers will know, I have a policy of starting with 4-4-2 and then adapting accordingly, but that would be quite mad here. Who partners Romelu Lukaku? It’s Oumar Niasse, Arouna Kone or Enner Valencia and I really don’t think there’s a right answer to that question. Heaven help me if Lukaku gets injured.

We’re going to work with a 4-4-1-1 shape that can go to 4-1-4-1 or 4-2-3-1 depending on circumstances. Team instructions are at a minimum and there are no player instructions as yet. Let’s start simple. 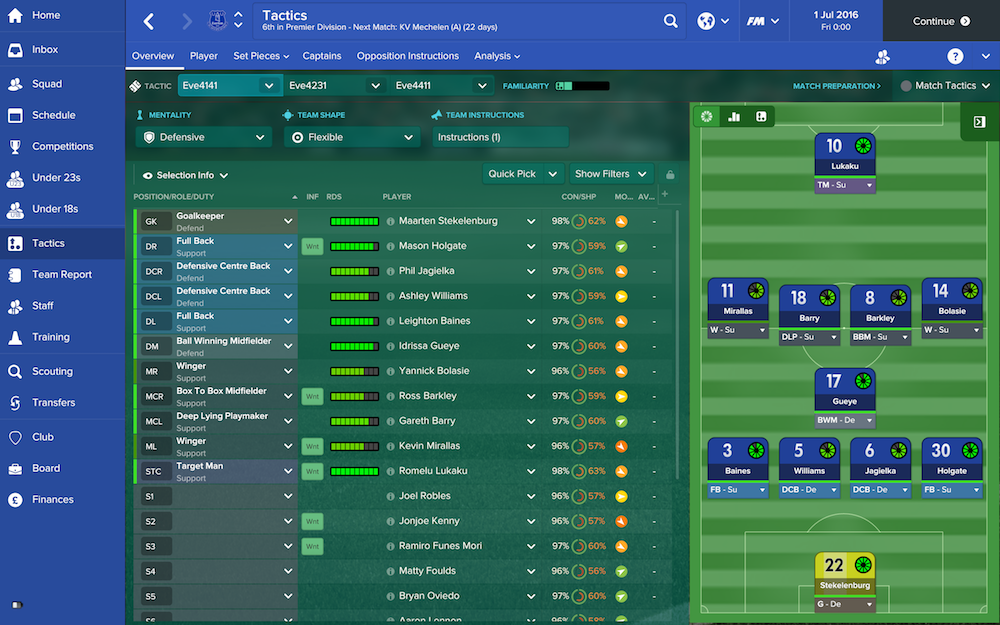 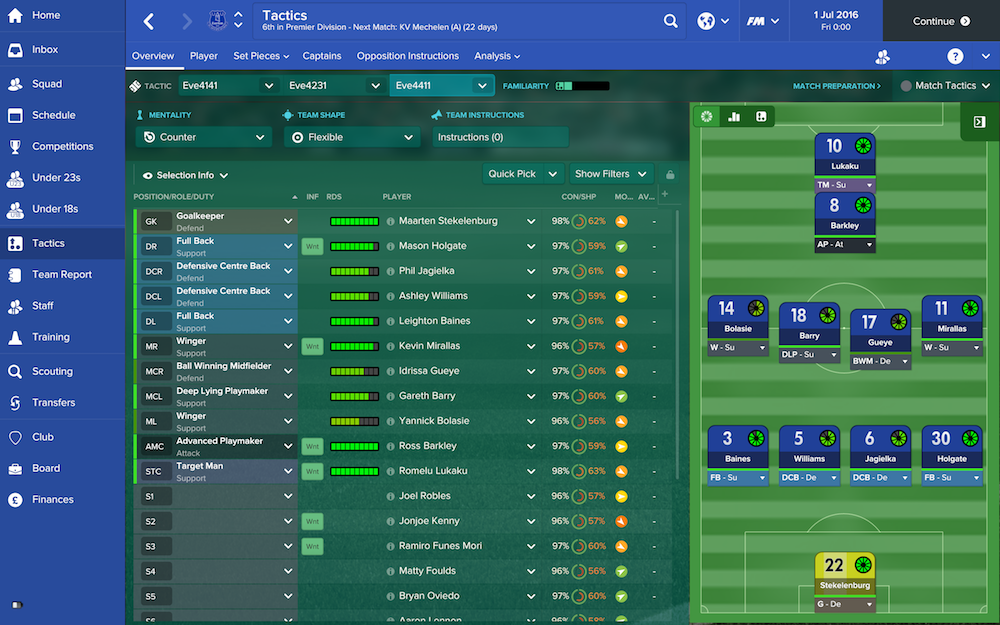 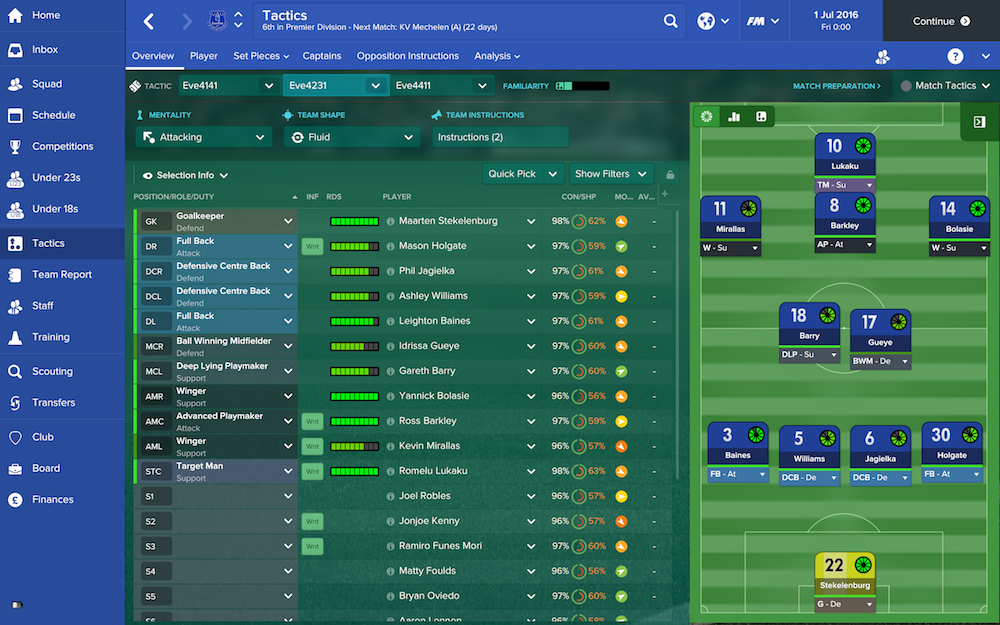 I’ve got time to map out a few set pieces too, ones for defending that should allow us to break and ones in attack that will hopefully pay dividends. Here’s one that relies upon no-one realising for the first few weeks that I’m doing short corners. 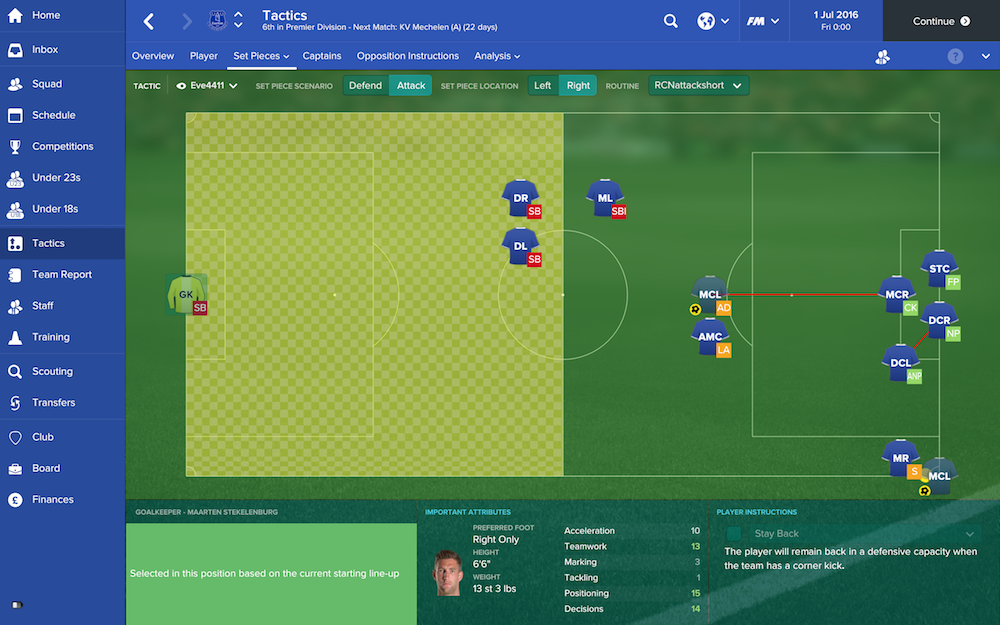 I love managing the youth teams normally, but given the pressure here, I think it’s best if I just focus on the first team. Besides, who am I to usurp Kevin Sheedy (U18) and David Unsworth (U23)? I’m sure they know what they’re doing. I give them free rein to manage to their teams as they see fit. And, when everything is done and the cafe’s breakfast rush has ebbed and flowed into the lunchtime rush, it’s time to take Unsworth on behind closed doors at our training ground.

Playing against your own youth team is never a satisfactory experience. If you win 6-0, it proves nothing. If you don’t win 6-0, you’re terrified that you can’t even thrash of team of children. There are no real benefits, save for a bit of familiarisation. But that’s what I need. I need as much preparation as possible.

We start with an attacking 4-2-3-1 and what seems to be my strongest possible line-up. I tell them not to worry too much, that this is just to help their fitness. Romelu Lukaku and Yannick Bolasie take this very badly. That doesn’t bode well at all. Still, let’s get out there and see if we can’t do irreparable damage to the confidence of our much heralded youth team. 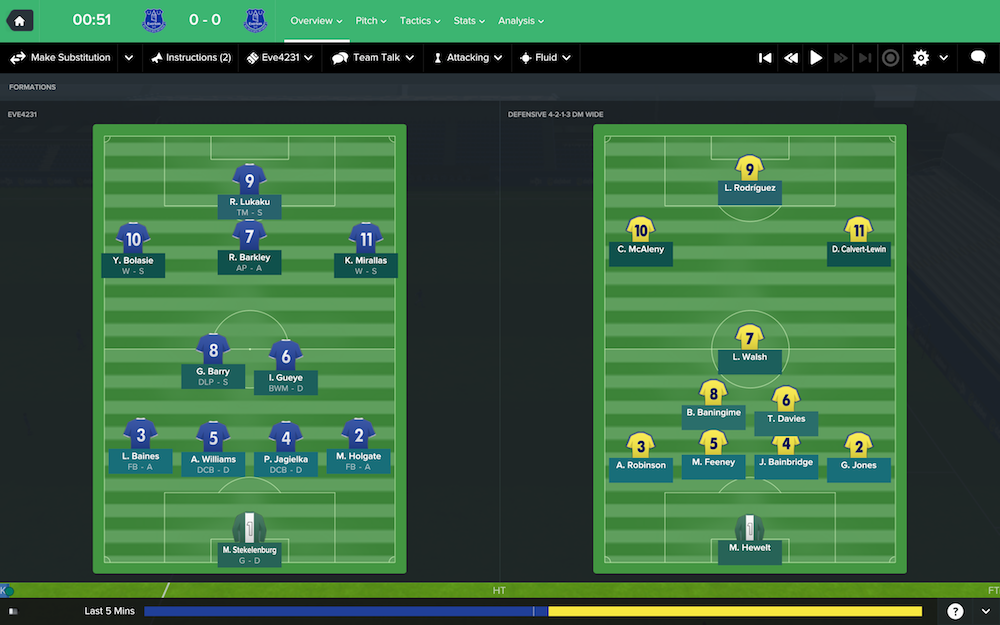 In keeping with pre-match expectations, that was a thoroughly unsatisfactory experience, not least because I watched the full match highlights in the hope that I learned something. The only thing I learned is that my U23 manager David Unsworth is a total bastard. His ploy of filling the middle of the park and dropping deep meant a long, frustrating afternoon. I might have to try that myself when Manchester City come to town.

The first ten minutes were startlingly bad. We were spread so wide that we somehow managed to make every attacking player look isolated and lonely. The midfield, with Idrissa Gueye dropping back, was swamped and we created hardly anything because we just kept smashing the ball up in the air and hoping it landed somewhere good. Midway through the first half, I made sweeping changes. The full backs were instructed to overlap, Kevin Mirallas was turned from a winger to a playmaker and we began to dominate possession. We also scored, which was nice, a Mirallas free-kick blasted through the hands of Mateusz Hewelt. They all count.

Half time brought a complete set of substitutions and the addition of a second striker with Enner Valencia supporting Oumar Niasse. Another goal followed, but if you think I’m taking the credit for Gethin Jones blasting the ball into the arse of Dominic Calvert-Lewin and into the back of the net then….well, actually, yes, that was all part of my plan.

But this wasn’t a good performance. We made very few proper chances, even when we switched to attacking football. Still, there was a nice link-up between Valencia and Niasse for a late third goal. So, you know, there is that. Perhaps I won’t have to have him ‘disappeared’ for the insurance money. 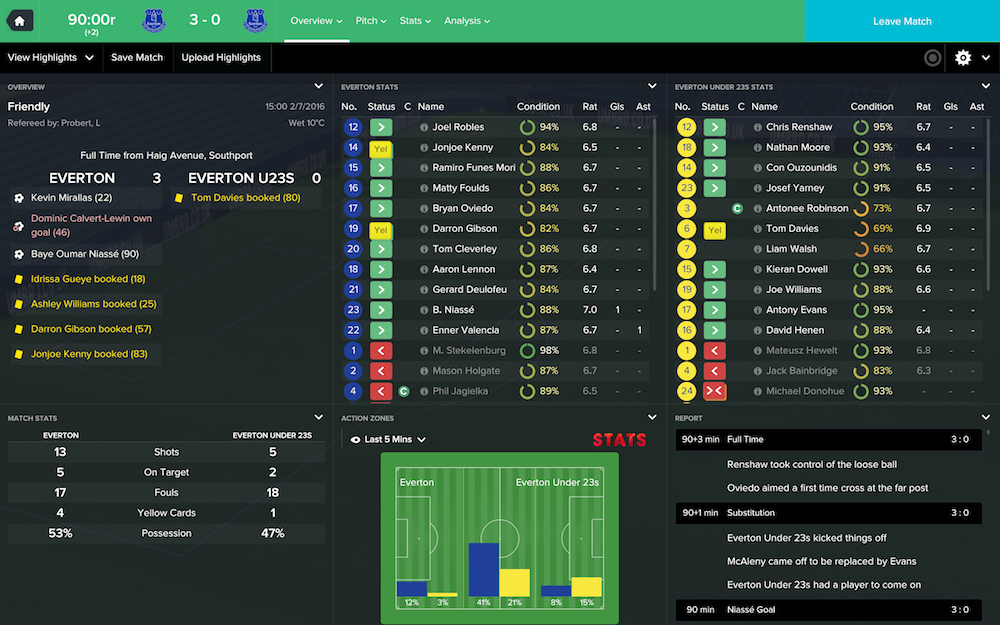 But let’s not kid ourselves. There is a phenomenal amount of work ahead of us. That was a youth team. Soon we’re going to have to play senior teams. Soon we’re going to have to play Premier League teams. I saw nothing today to convince me that I’ll still by Everton manager by Christmas. I need to fine-tune these tactics. I need to win over these players. I need to win. Because this is my actual, real life job. And I’d quite like to keep it.