Can a man who failed so miserably with Everton perform any better when bestowed with immortality and granted complete control of an ancient society of hunter-gatherers? Will he be wiped out in 2000 BC by the Aztecs? Find out in what promises to be the shortest-lived experiment in the brief history of e-gaming. 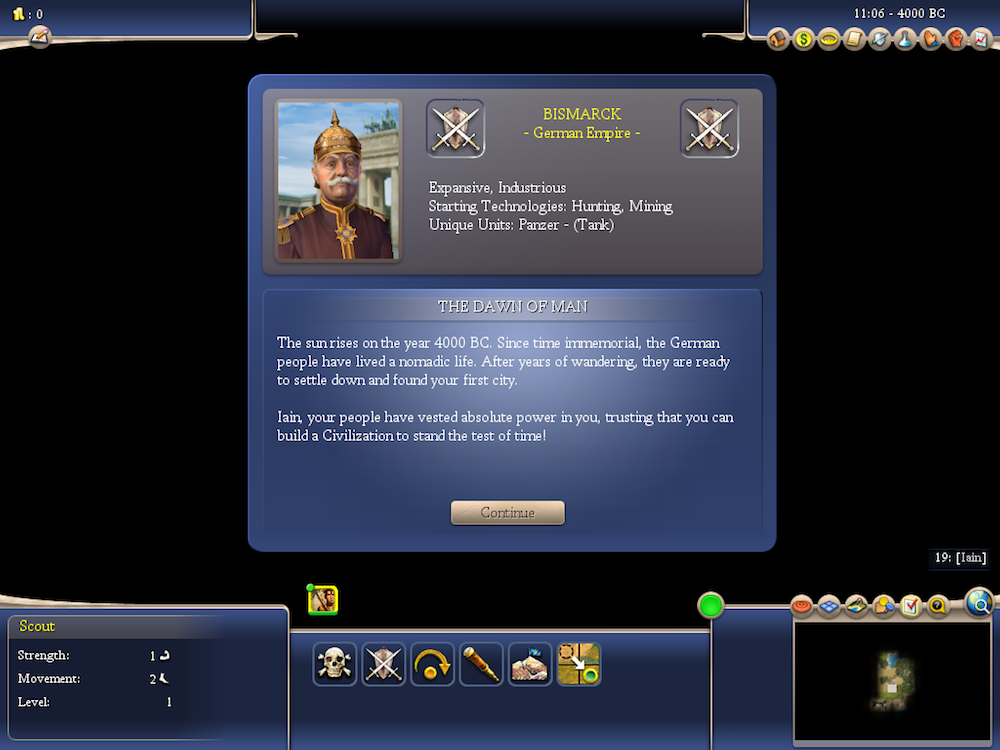 Dawn breaks and I wake to find myself curled uncomfortably under a fur skin, out on a dusty plain. I lift my head and note with interest the stretchings, yawnings and surprisingly volatile expulsions of 100 or so men, women and children. We seem to be in a valley of sorts, next to a large expanse of water, the extent of which I cannot see. Wooded hills surround us on all sides, save for a narrow, flat pass to the west. From somewhere to the south, I hear the distant trumpeting of elephants. And Elvis Presley is standing in front of me with a expectant look upon his face.

Elvis is a good lad. Not much of a fighter, but boy can he move. As a scout, he can cover twice the ground of a normal man, and he’ll even defend himself should the need arise. But I hope it won’t come to that. At the very dawn of history, we really don’t want to lose the King. I ask him to make a wide circle of our perimeter and report back. “Uh-huh,” he says, and vanishes over the hills. I hope that I will see him again soon.

In the meantime, we the people need to put down roots. And so Chelmsford is formed in the year of our as-yet-undesignated-Lord, 4000BC. We move quickly to separate the strongest fighters from our pitiful ranks and train them as warriors. Warriors, you see, are twice as strong as scouts. And they can start fights, as well as finish them. This, I suspect is a dangerous world, and we need all the protection we can get. 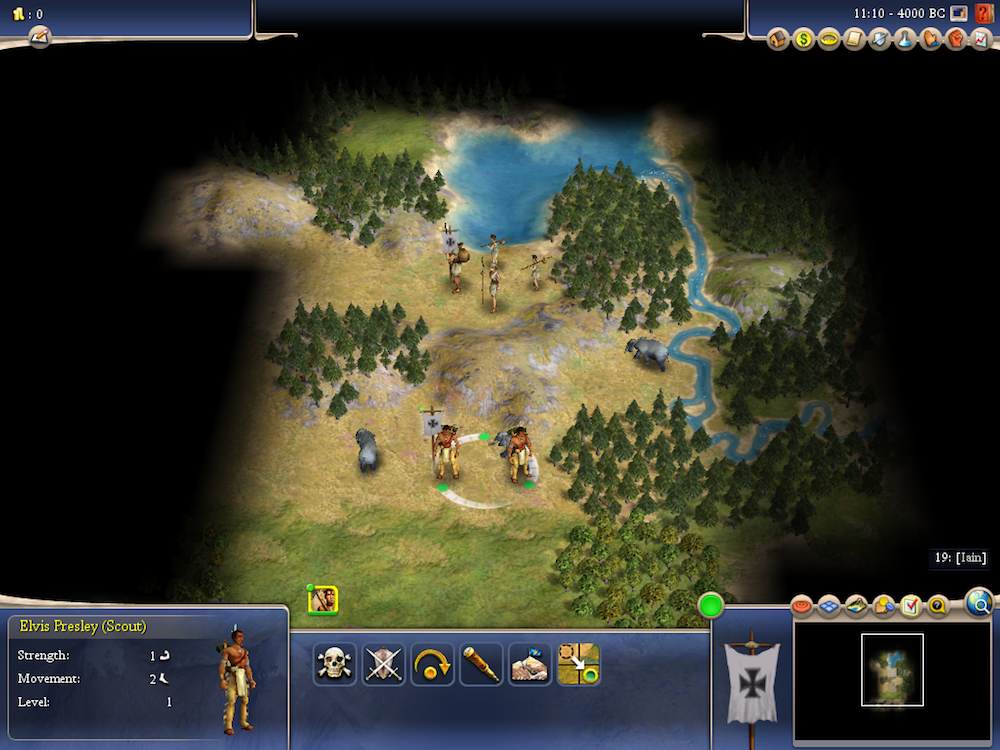 Alas, I am proved correct. Even as our scholars are attaching worms to lined hooks and hurling them into the lake to see if we can ‘capture’ fish, Elvis reports back that he has met with a delegation of Mongolians from the west, led by a chap who styles himself as Genghis Khan. But, in fairness, he seems pleasant enough and Elvis certainly enjoyed the feast. 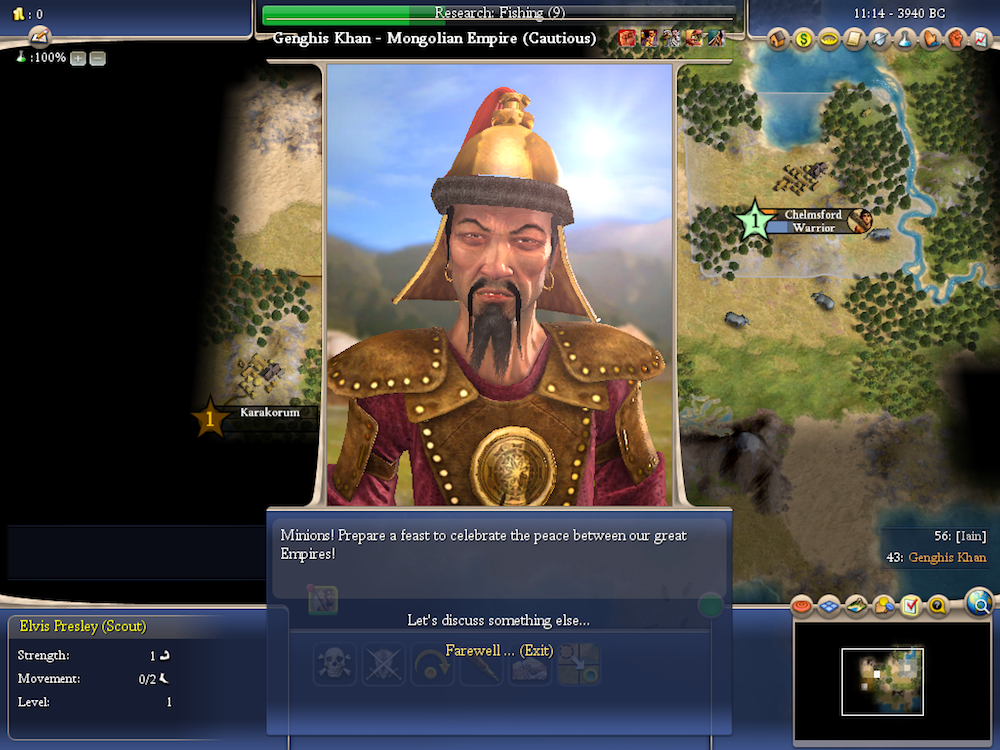 I am less enthused by our neighbours to the east. There’s something about Montezuma and his Aztecs that unsettles me. It might be his cold, shark-like eyes, it might be his Keegan-chin, or it might be the fucking skull that he’s wearing as a hat. Also, I don’t have 50,000 slaves. There’s barely 10,000 people in Chelmsford and I have no desire to sacrifice any of them. Well, apart from the bloke who keeps eating apples on public transport. I’ll drive him over myself. 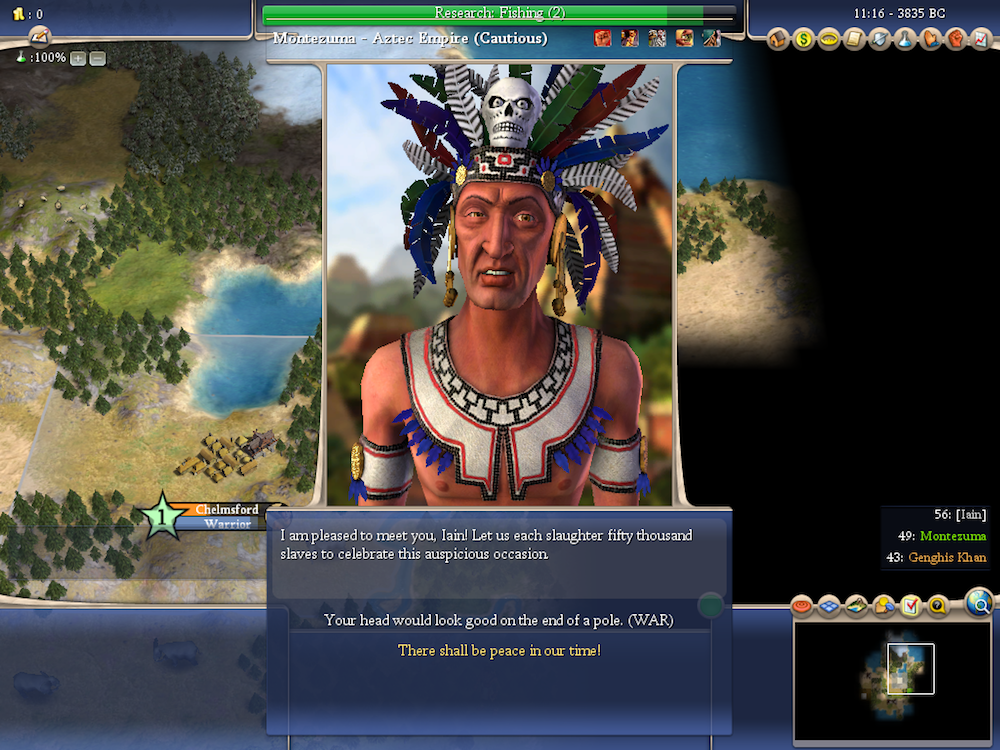 By 3775 BC, my first band of warriors is ready. They are hard, they are unrefined, they are set to take the world by storm. They are Oasis. And they are heading north. In the meantime, our boffins can figure out how to turn this dusty land into a source of food. Good luck with that. 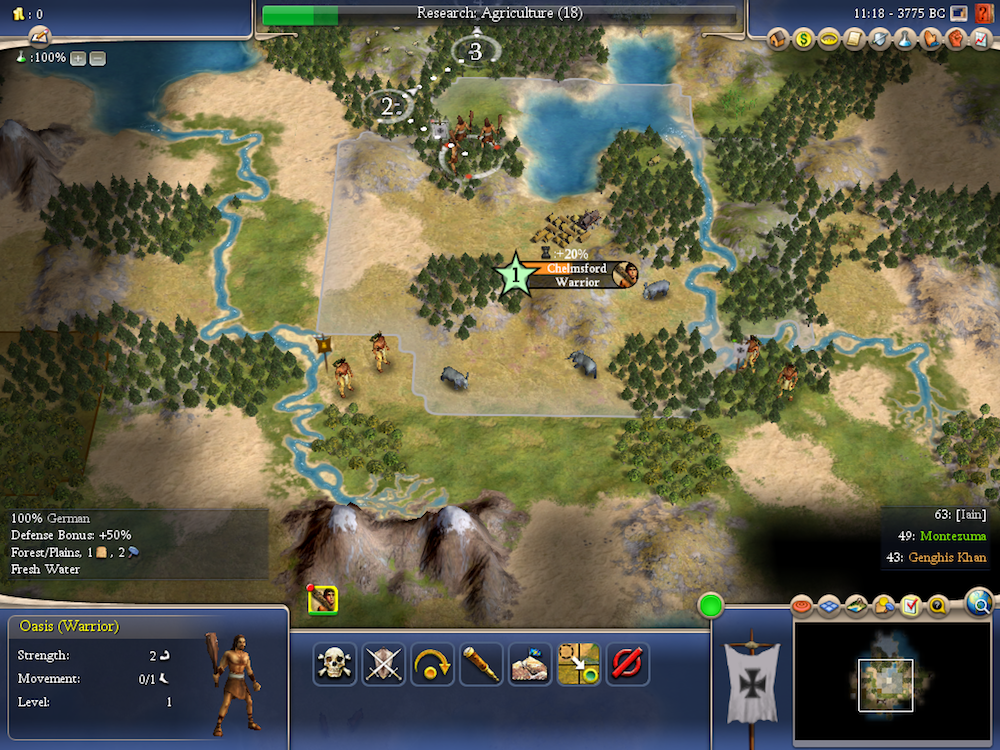 Meanwhile, Elvis is still scampering through the wilderness, having adventures and making new friends. To our south-east, he finds Ghandi and the Indians, who seem nice. If a little snobby. 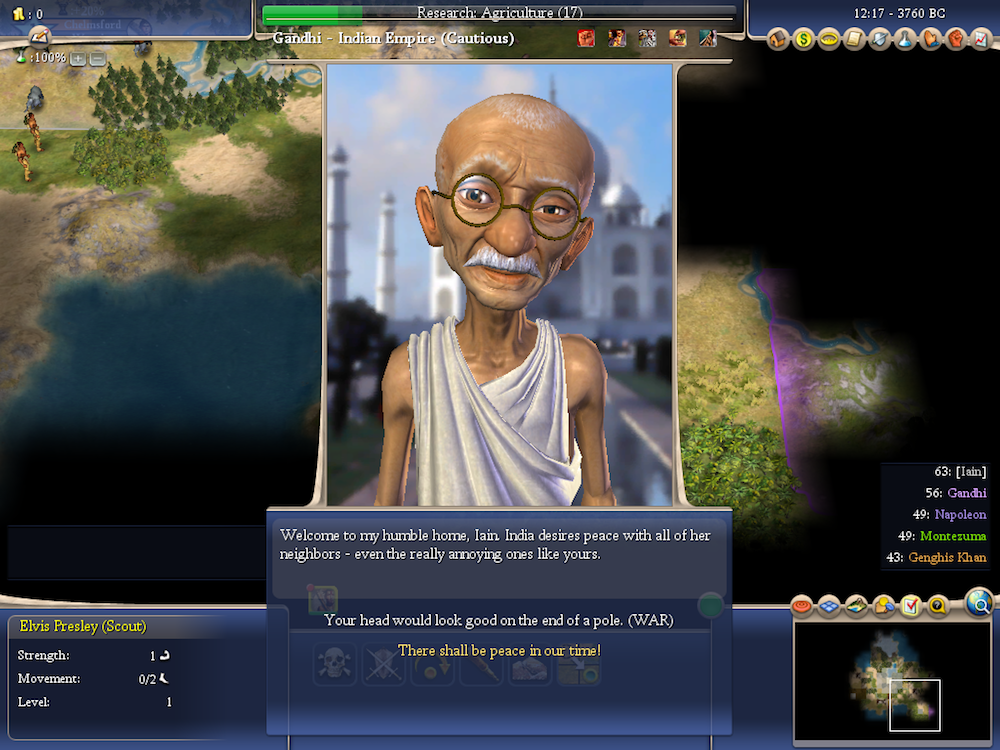 Further south still, we find the French. And call me suspicious, but I have a feeling that we should keep an eye on Napoleon. 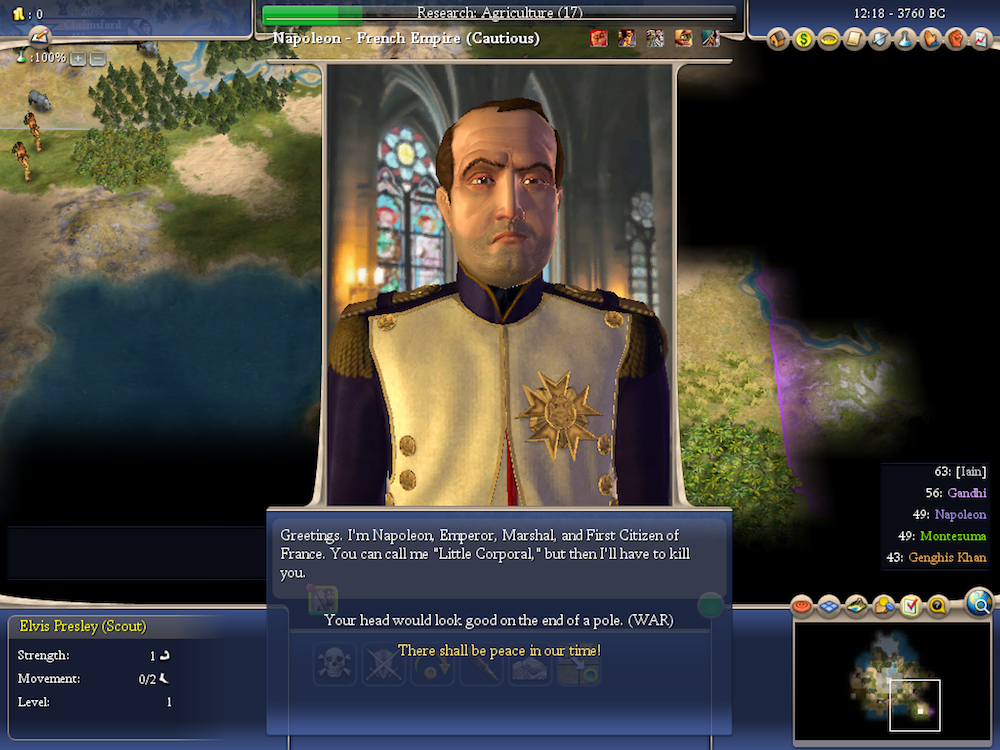 But complex matters of geopolitics will have to wait for another day. At this stage, it’s all about staying alive. Because of our location, stuck out on the plains and bereft of useful resources, we’re not going to grow very fast. And if we can’t grow very fast, we can’t build very fast, learn very fast or make bundles of money very fast. At this stage, our priority is to protect ourselves from immediate danger, discover as much as we can about our surroundings and build a base for a civilization that will, hopefully, last thousands of years. And everyone is out to get us, even the animals. 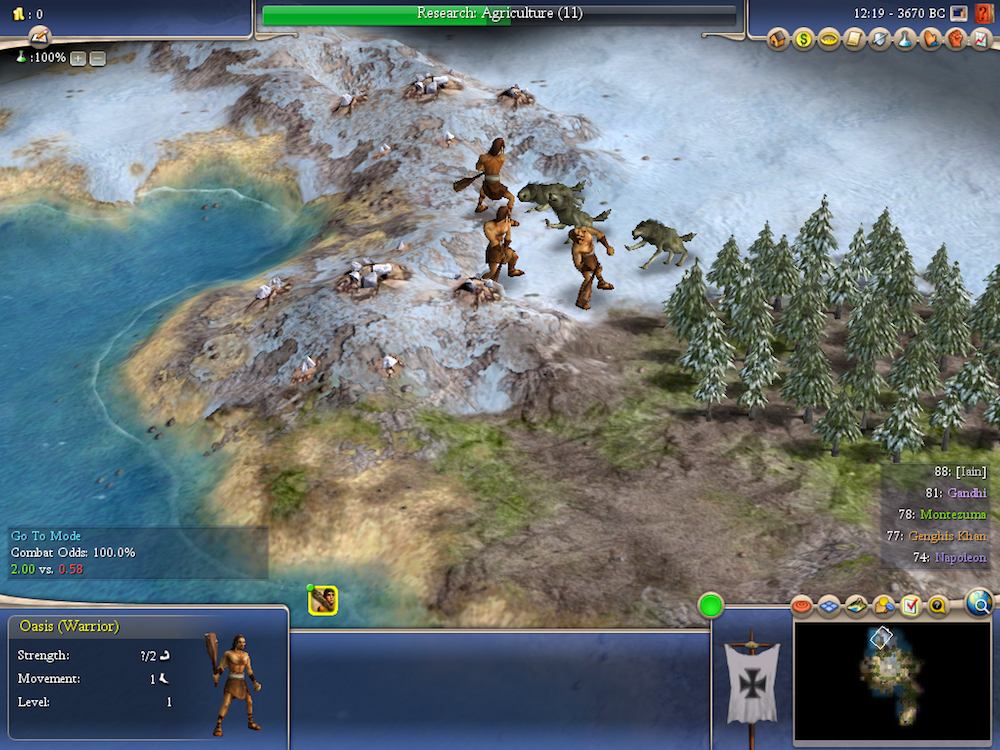 The first attack comes from the north, where a pack of wolves descends upon Oasis and eats Tony McCarroll. The rest of the band members are quick to respond and the animals are soon routed, but at what cost? The cost of the original drummer, that’s what. Fortunately, if we let them rest up a bit in those nearby woods, Alan White will be along in a jiffy.

It’s no more pleasant out there for our second band of warriors. While scouting to the north-east to find the location of the Aztec cities, Blur are attacked by wolves too and I’m not sure that Graham Coxon will ever be the same again. With these unpredictable attacks becoming more frequent, I leave the third band of warriors in Chelmsford to protect my civilians. This sacred burden of responsibility will weigh heavy on the narrow shoulders of Jarvis Cocker’s Pulp. I think a barracks will be required to give our brave boys and girls of Britpop the best possible chance of survival. 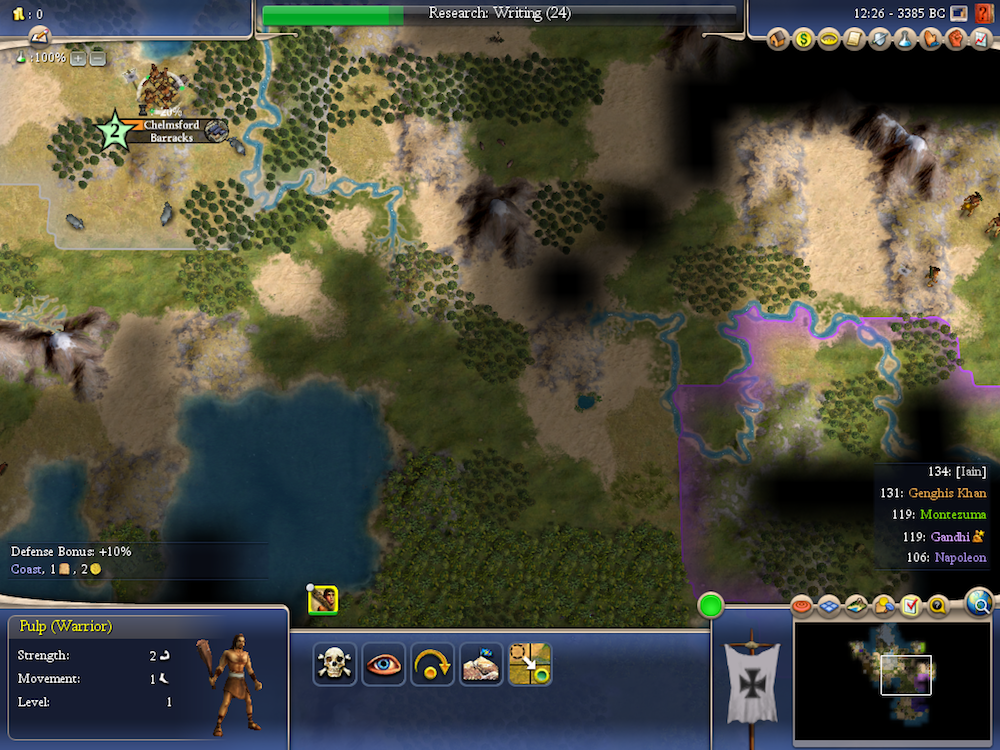 But it’s not all doom and gloom. We’ve worked out how to fish and how to farm, and we’re cracking on with writing in that hope that libraries give us power. Elvis is still galumphing across the hilltops of this strange world and I think we may already have mapped most of the continent. There’s still one more rival civilisation out there somewhere and things are bound to get heated when the more useful natural resources like copper and iron are discovered, but for now, let’s focus on the positives. I’ve led my people through nearly 1,000 years of history and I haven’t got anyone killed – apart from poor Tony. I think, bearing in mind what happened at Everton that time, this is a very reasonable start.

This epic story of love and betrayal in a world gone mad is being played out on Civilization IV, released in 2005, but still available on Steam and still gloriously playable even with the lowest spec machine.