Can a man who failed so miserably with Everton perform any better when bestowed with immortality and granted complete control of an ancient society of hunter-gatherers? Will he win the space race or die in the dark ages? Find out now because if you keep reading it in the numbers we’ve seen so far, we’re sort of obliged to keep publishing it.

It’s a tale as old as time itself. A hopeful despot is caught between a bold plan to rapidly expand his empire or the sensible option of protecting what he already has with garrisons of archers named after 1980s pop groups. I choose to expand and I pay for it with my blood pressure. With every passing year, we draw closer to the completion of the long-prophesied city of Southend, but all the while the risk of a Mongol, Aztec or barbarian invasion grows. And we are not prepared for an invasion. 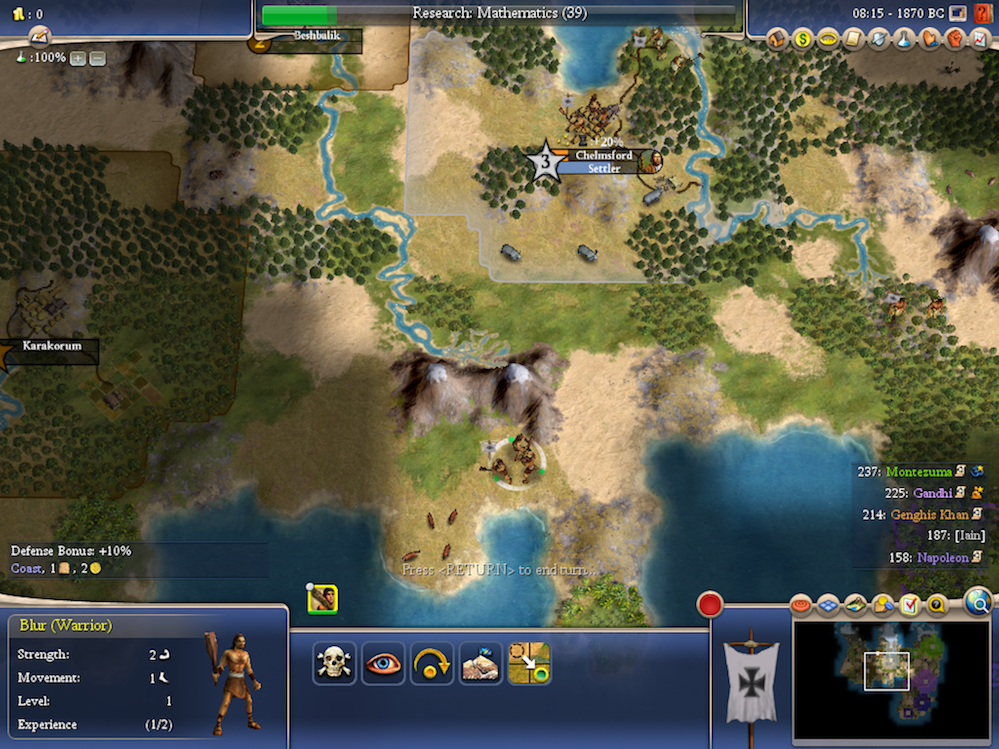 Fortunately, by chopping down a forest to the north-east of Chelmsford, we are able to clear the production line swiftly. The settlers wave their goodbyes and march south where Blur are patiently awaiting their arrival. But as they travel, they notice smoke rising from settlements to the east and the west. The Indians have expanded, building Madras so close that they could lay a claim to Chelmsford’s resources. On the other side of our capital, Beshbalik is already in place. There isn’t much unclaimed land now. The people of Essex are caught between three rapacious empires. And we still haven’t built those bloody archers. With substantial work completed on Chelmsford’s barracks, I take one further gamble and finish it off to ensure that future units are of the highest possible quality. 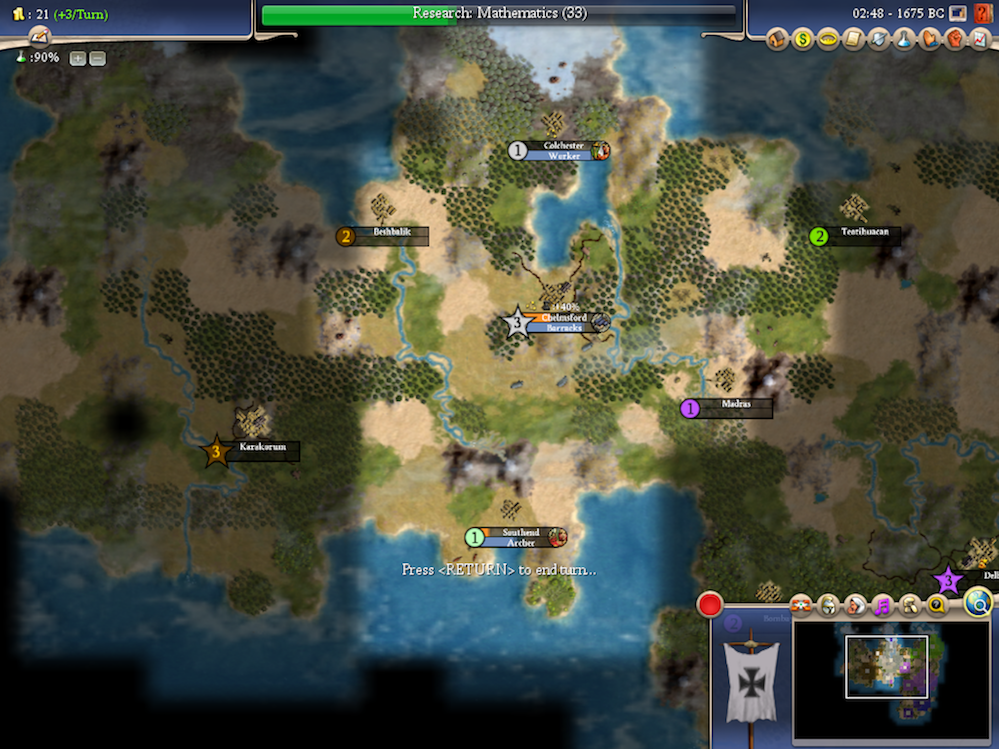 And finally, the first of the archers is complete. Blur are no longer left to their own devices in Southend. Duran Duran are now in place, commissioned specifically to keep that Essex riviera safe. That’s one less thing for me to worry about. 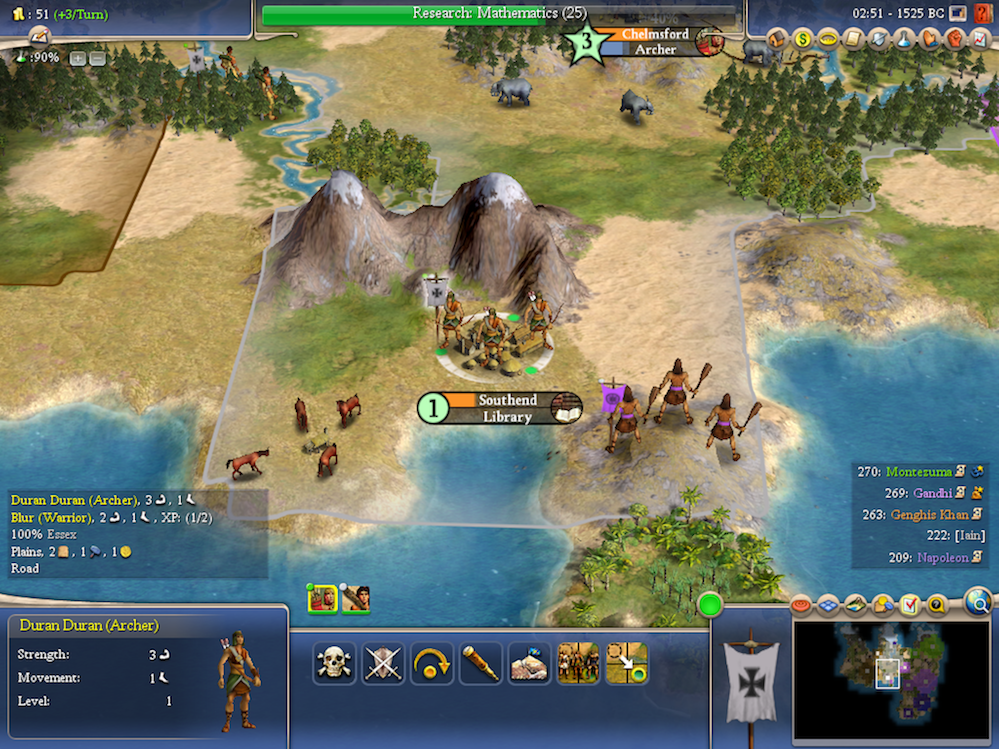 Sadly, there is no shortage of new concerns. The news I had been dreading since the dawn of time breaks and our people are heartbroken. Elvis Presley is dead. Our wise men say only fools rush in to the unexplored northern wastes of outer Mongolia, but this appears to have been precisely the problem. Elvis, our scout, our inspiration, our friend, was ambushed and murdered by barbarian archers. But at least he didn’t die on the toilet this time.

I’m also alarmed by a message from Montezuma of the Aztecs urging me to break off diplomatic relations with Gandhi. Obviously, I refuse. Soon afterwards a message arrives from Gandhi, telling me to break off diplomatic relations with Montezuma. I don’t want to do that for the moment either. He’ll get upset. Maybe ask me when two of my three cities aren’t woefully under-prepared for a punitive invasion, eh? 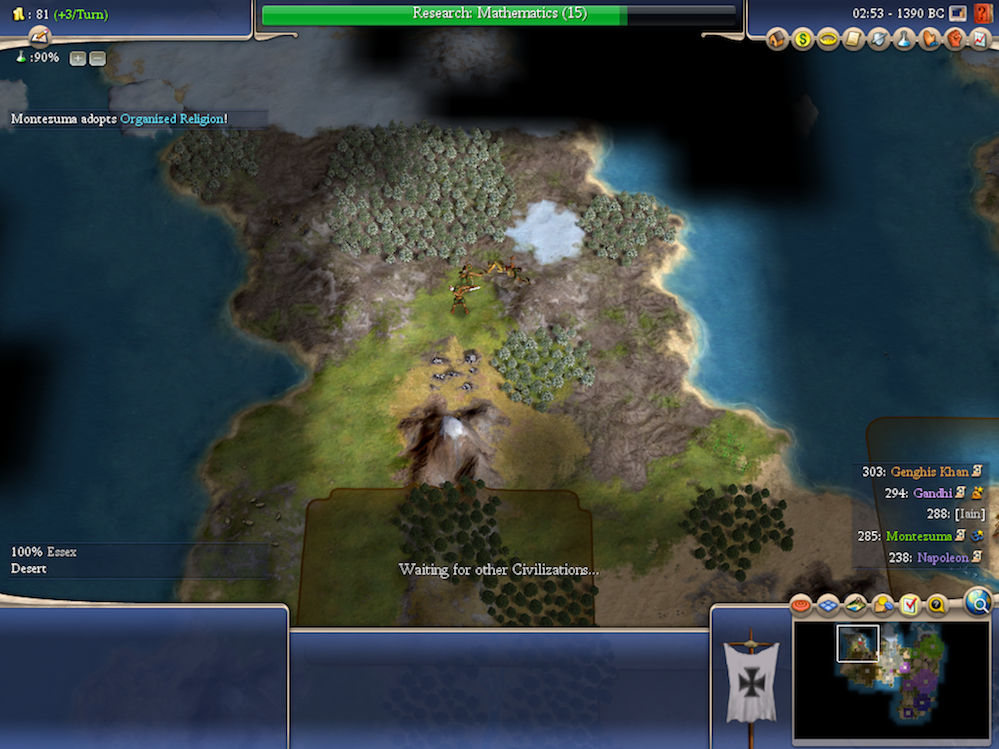 For the first time, barbarian units are moving into my territory to attack. They’ve only brought warriors with sticks but as I only have warriors with sticks in Colchester, there is a sizeable risk here. Fortunately, I’ve built a road connecting Chelmsford with Colchester and I can get Pulp up there to help Oasis hold the city. Unfortunately, after taking this screenshot, I clicked continue without actually clicking for Pulp to move. I am my own worst enemy sometimes. 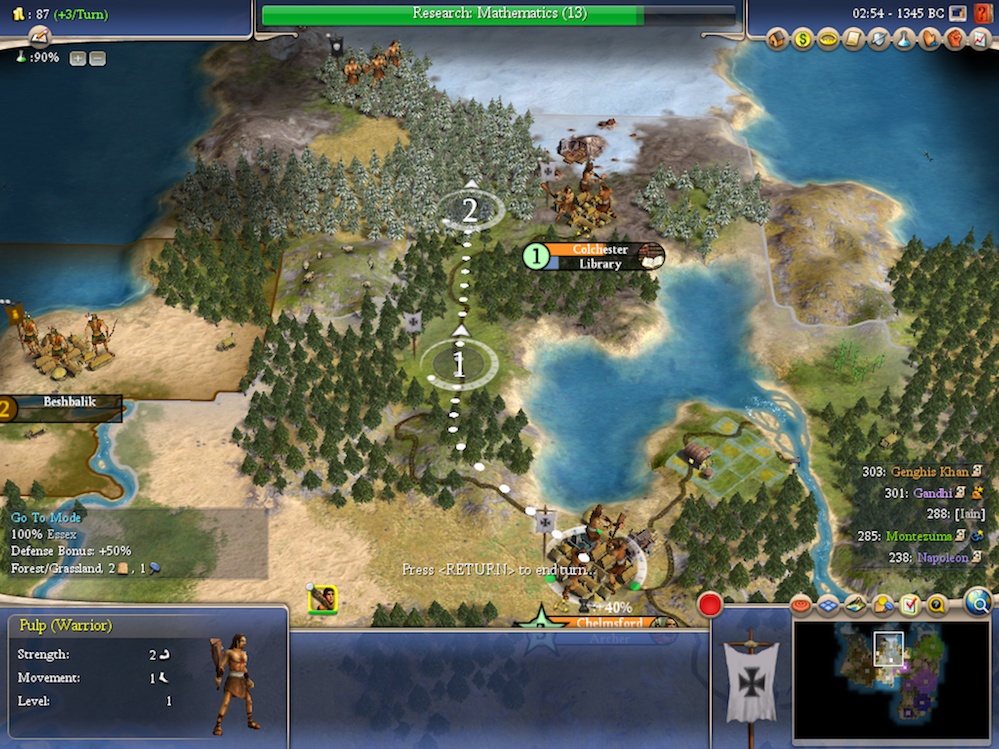 No thanks to Jarvis Cocker and the gang, Oasis hold out and earn themselves a promotion in the process. And back down in Chelmsford, Spandau Ballet are ready to serve. We’re getting there. But there is still much to do. 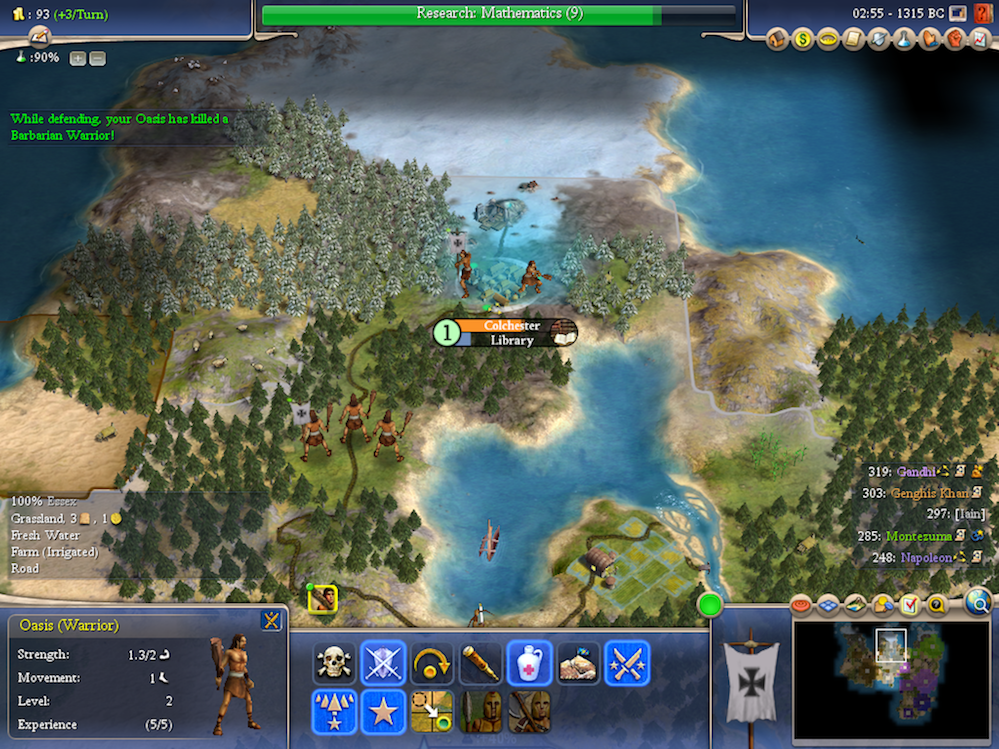 Now, it’s time we had a little chat about culture. Culture spreads, you see. The more cultural buildings you have, the more the people in the nearby fields and hills are impressed with you. Those coloured shapes around the cities that you can see, they represent the extent of your reach. Produce more culture and watch happily as the shape spreads out. If it washes over resources, you can claim them. And if it washes over a rival city, it may incite the residents to take up arms against their leaders and join your empire. And that’s how I aim to flex my muscles in the medium term. Libraries generate culture and if I have three of them in my three cities, there’s a chance that we’ll snatch land, and possibly the very cities of Madras and Beshbalik. And that would be nice, wouldn’t it? Especially Beshbalik. It’s on the coast, so it will be nice for ship-building, trade and slightly disappointing family holidays. 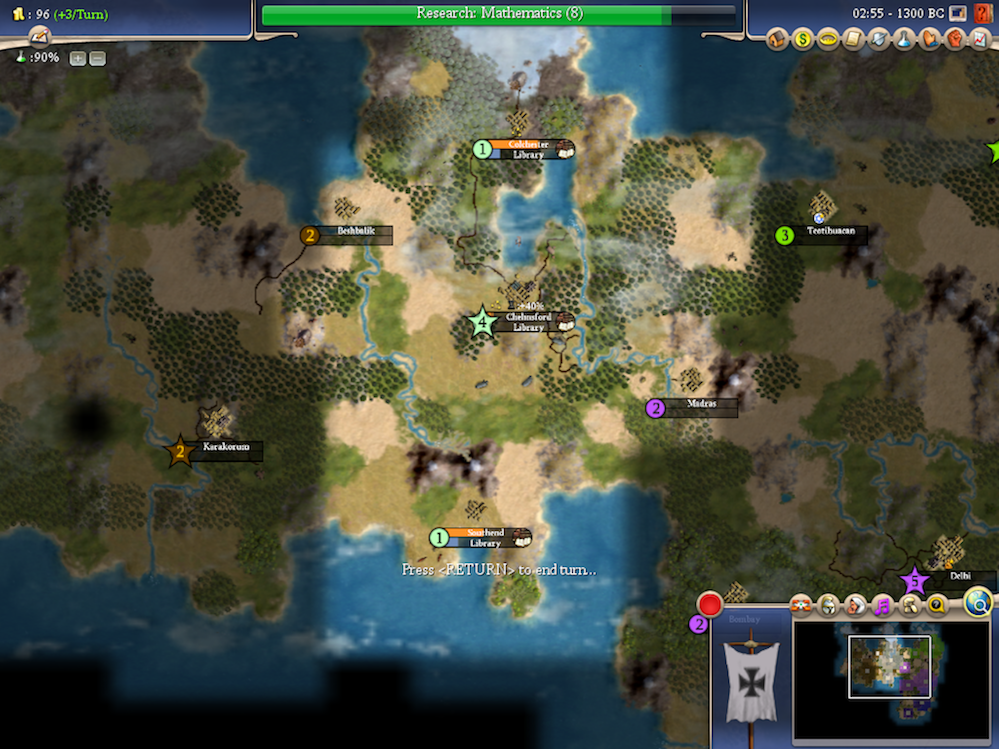 But while I’m sending copies of ‘Copper Mining for Beginners’ and ‘Elvis Presley: The Real Story of a Real Hero’ up and down the empire, I can’t build new military units. The barbarians continue to pour over the border and they have already evolved into something more threatening. Now they have axemen. Axemen are bastards, they have a strength of 5, higher than archers (3) and warriors (2). There are various defensive bonuses in play for archers, not to mention defensive promotions that make them stronger, but this is still a very dangerous situation. The defence of Colchester will fall to Spandau Ballet. And thank our as-yet-undesignated-God, Tony Hadley holds the line for the loss of just a single Kemp. The smaller one. The one who wasn’t in EastEnders. Alan or something. 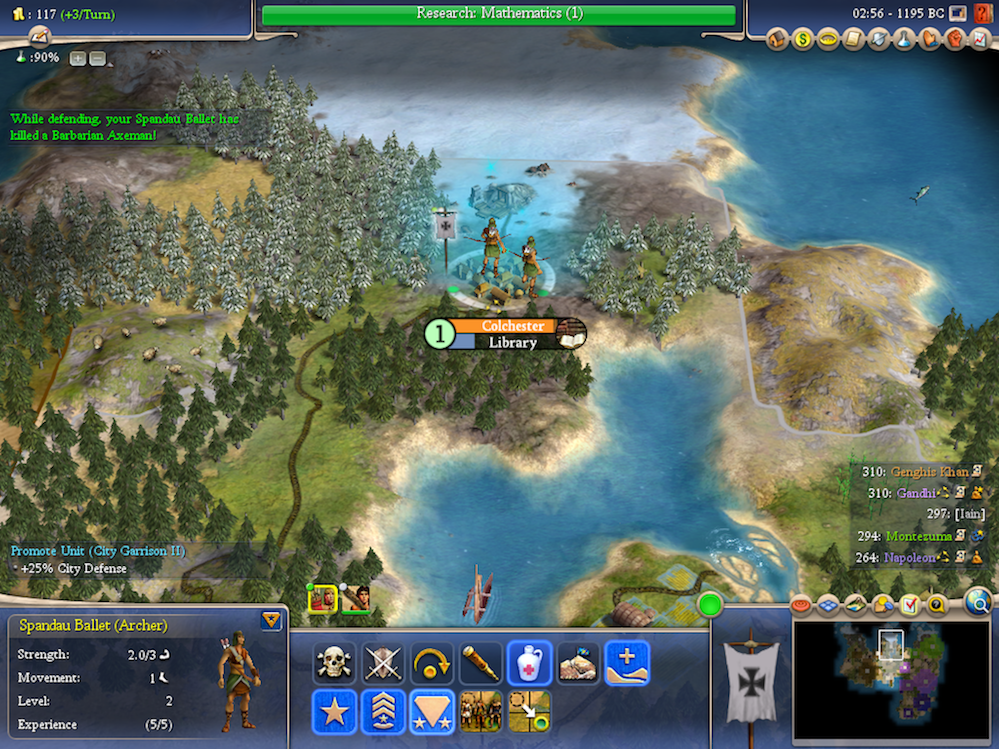 But I don’t want to be this vulnerable for much longer. In order to bolster my military, I’ve made sweeping cuts to public services and raised the funds for an upgrade. Behold, Pulp the Axemen. They are a different class. 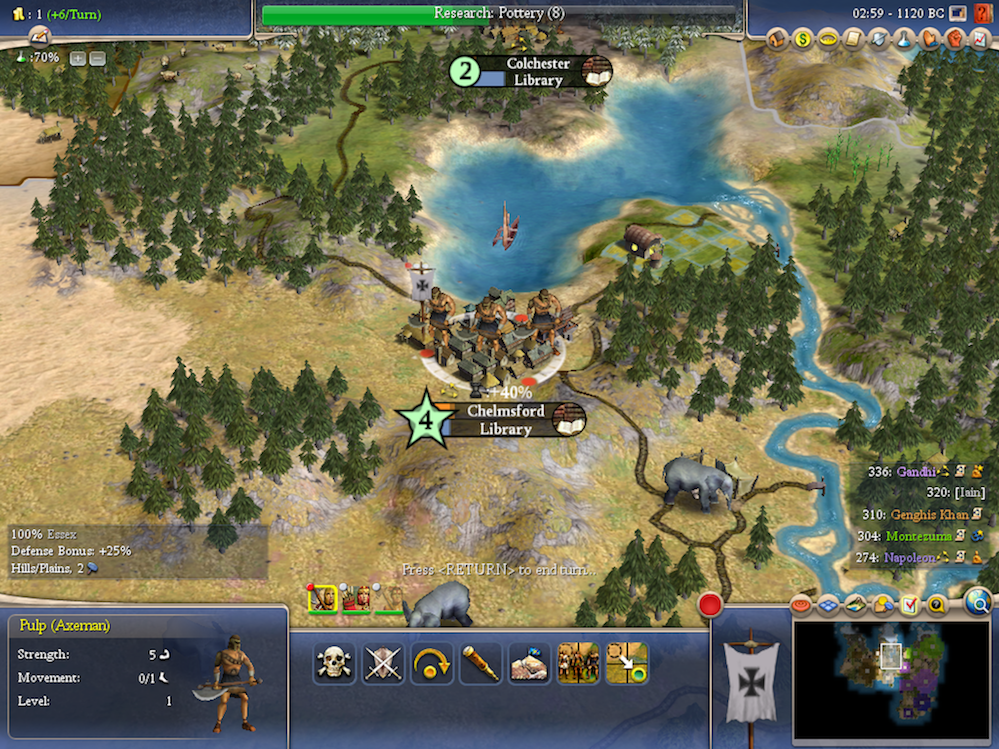 And so, as we enter the final millennium of the pre-Christ era, this is the state of play. We remain surrounded on all sides. The Aztecs to the east worry me. The Mongols to the west worry me. The Indians are probably okay, but Connor clearly disagrees.

@iainmacintosh Mate, get rid of Gandhi ASAP, or he'll go metal & nuke *everything*

Militarily, we’re still pretty weak and it’s not ideal to have just two archers for three cities, but there has been a trade-off for that. We now have two worker units bustling up and down the empire building mines to speed up our production or farms to increase our growth. We are well on the way to having three libraries radiating culture and, hopefully, wooing rival cities into our grasp. But at some point, someone is going to kick off. I just hope it’s not for a few hundred years yet. 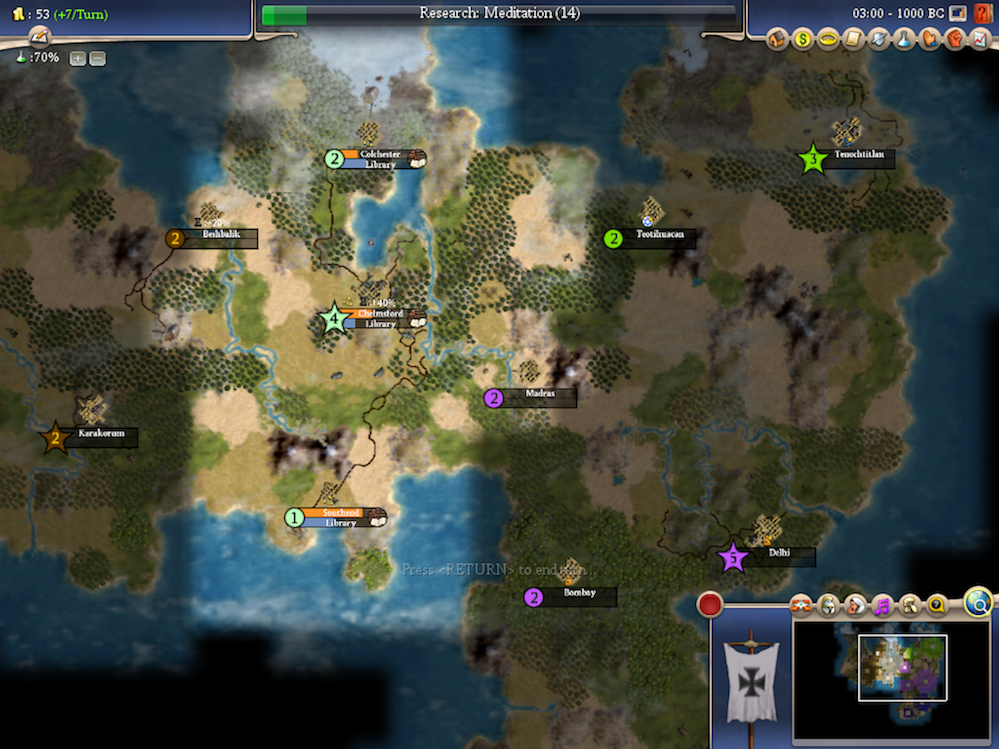 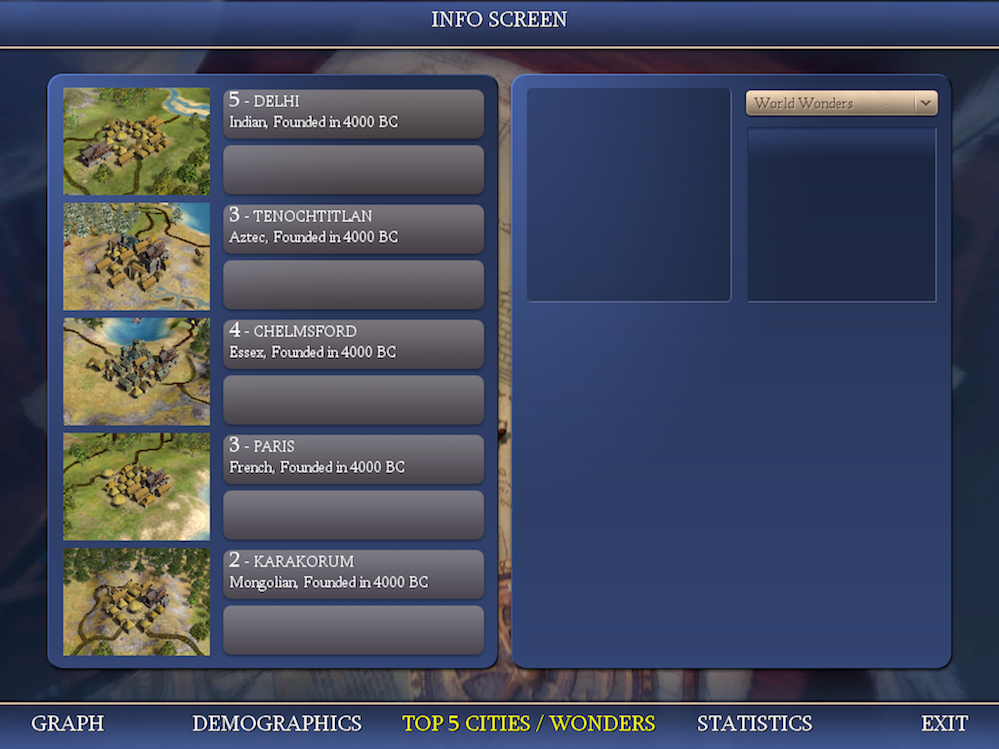