Can a man who failed so miserably with Everton perform any better when bestowed with immortality and granted complete control of an ancient society of hunter-gatherers? Will he win the space race or die in the dark ages? Find out now because otherwise I’m just a 39 year old man playing a 12 year old computer game alone in a windowless office wondering about his life choices.

My old nan used to say to me, “Si vis pacem, sunshine…para bellum.” It was a strange sort of saying and I don’t know why she only said it in the queue at the Post Office, but she was a fine woman and I won’t hear a word against her. And she was right too. If you desire peace, prepare for war. And that’s what they’ve been doing for several hundred years in Colchester.

All of our cities are now well protected. With judicious chopping down of forests, they’re all protected by high walls and garrisoned by well trained troops from the Chelmsford Barracks. Spandau Ballet and Depeche Mode are in Colchester, The Bangles and Bananarama guard Chelmsford and Southend is under the reassuring aegis of Duran Duran and the Thompson Twins.

But it’s not enough just to cower behind our walls. We need melee units to repel an invading army. I have put my faith in Oasis, Teenage Fanclub and Suede, with Blur and Pulp in reserve. If the Aztecs want my land, they’ll have to take it from the cold, dead hands of some of the 1990s most enduring pop stars. 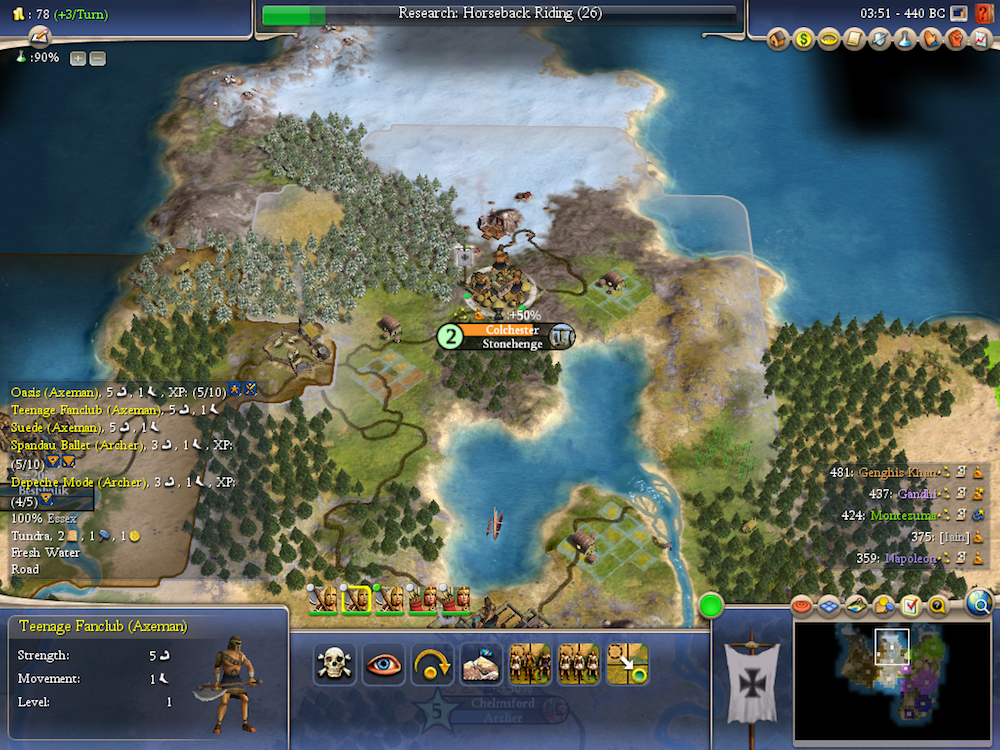 We’ve had something of a spiritual awakening too. In 710 BC, we really got into Buddhism, you know? We can’t do the leg-crossing thing and we haven’t gone so far as renouncing all our possessions, but we’ve got that cook book that everyone keeps going on about and we’re feeling much more chilled about stuff. And that’s important because the world is a scary place. As we’re anxiously watching the borders, wondering who is going to attack us first, Napoleon makes a move. But it’s not against us. Instead, his forces pile into India. And both parties want me to get involved too. 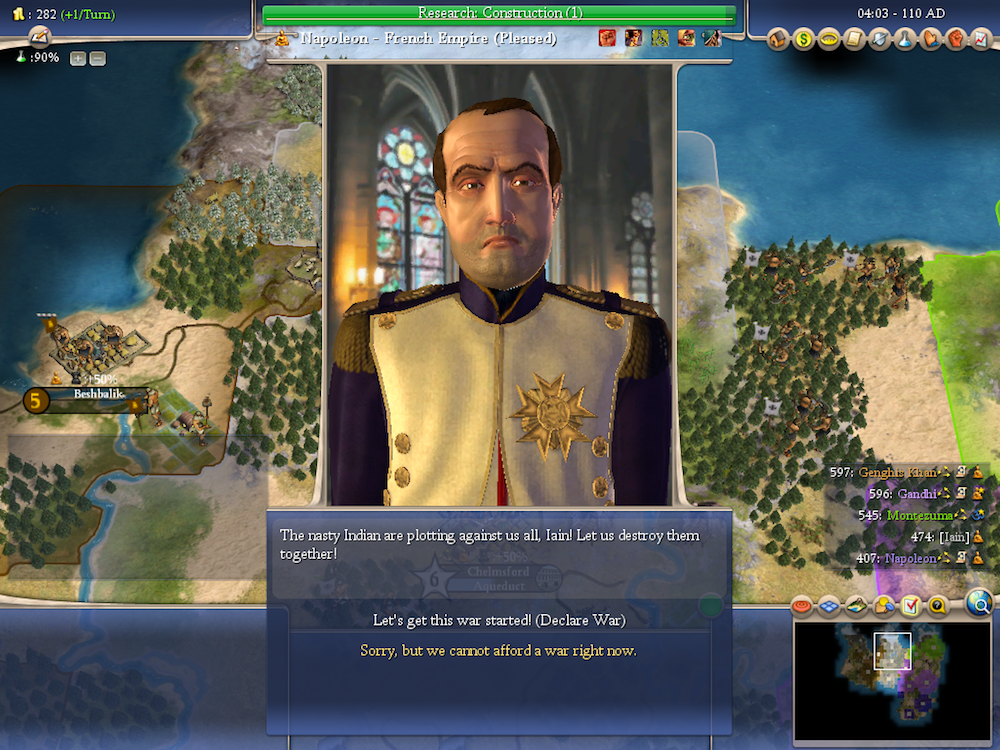 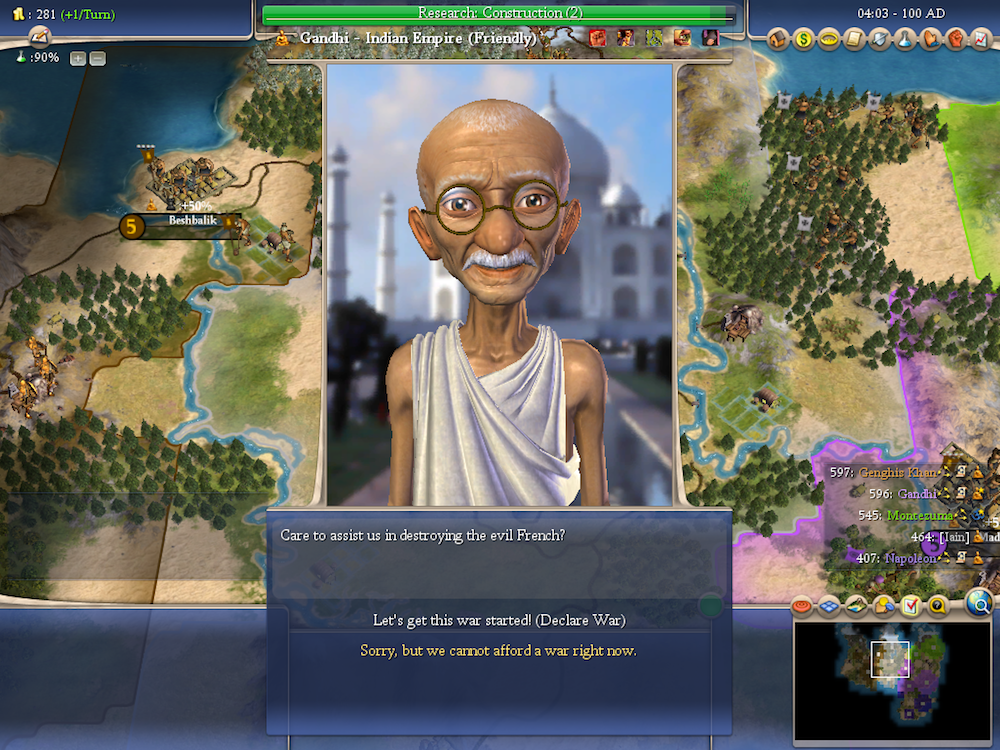 And it’s the right decision. A few decades ago, the Aztecs broke off diplomatic relations with us for no apparent reason. They are now the outright favourites for the title of, ‘First Nation To Try To Smash Us Up’ and I am very concerned.

Every nation gets a special bonus at the start of the game. My people are very organised, so I can build workers quickly. The Aztecs are double-hard bastards. All of their troops come fitted with a combat bonus. If they come out of a barracks, they’ll have two bonuses. You do not want to spill their pint.

To guard against them, I need to take up defensive positions. The forest to the east is the best bet. You get a 50% defence bonus for hiding in there and it lifts by another 25% if you can spend five turns digging in your fortifications. There’s just one problem: We don’t own the forests. We can hide there, but the Aztecs can march freely through our lines and all the way up to our borders before declaring war. That would be embarrassing.

So we need to bring the borders to the forests. To this end, I accelerate the development of cultural buildings. We’ve already got libraries in every city. Short of building a wonder of the world, and I’ve tried and failed to do that, the next best thing is to build monasteries and temples. If I get my axemen in position, hopefully the borders will spread over them and we’ll have a good chance of keeping the Aztecs at bay.

Of course, if the Mongols decide to ride across our unprotected borders in the West, I’ll look quite the dickhead. 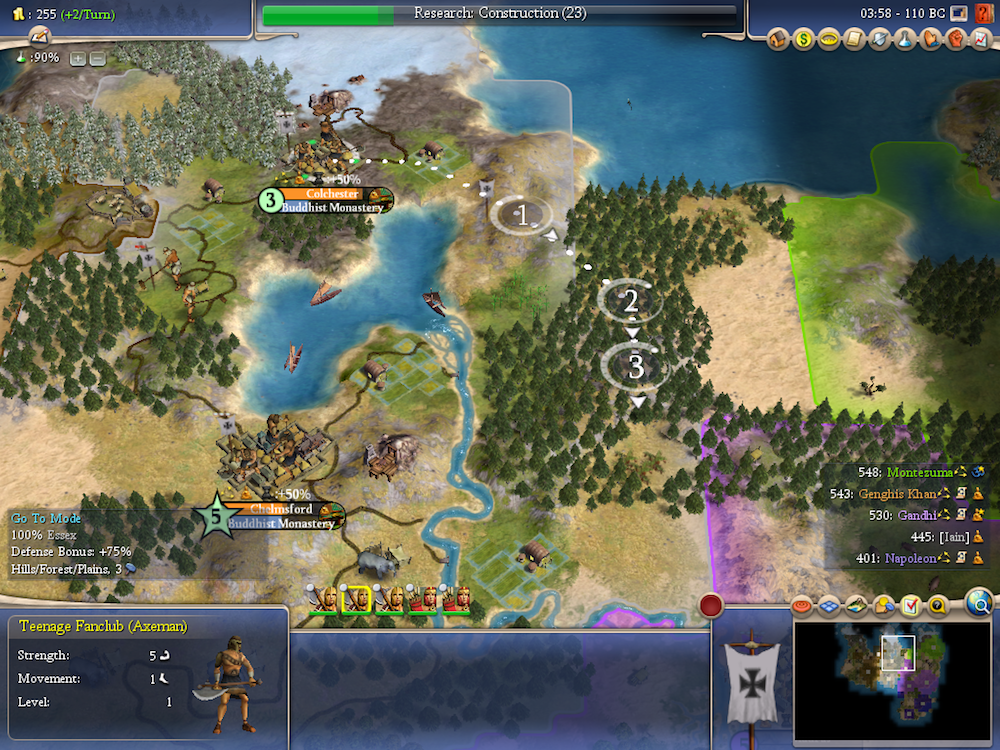 It’s a good plan, it really is. There’s just one problem. The Aztecs are on the move already. They have three axemen and they’re all promoted to terrifying levels of ferocity. We won’t beat them in a straight fight and if we stay in the forest, they’ll march straight past and have a clear run at our cities. We scramble back for the hills. There’s a 25% defence bonus in the hills. Perhaps it will be enough. Perhaps. 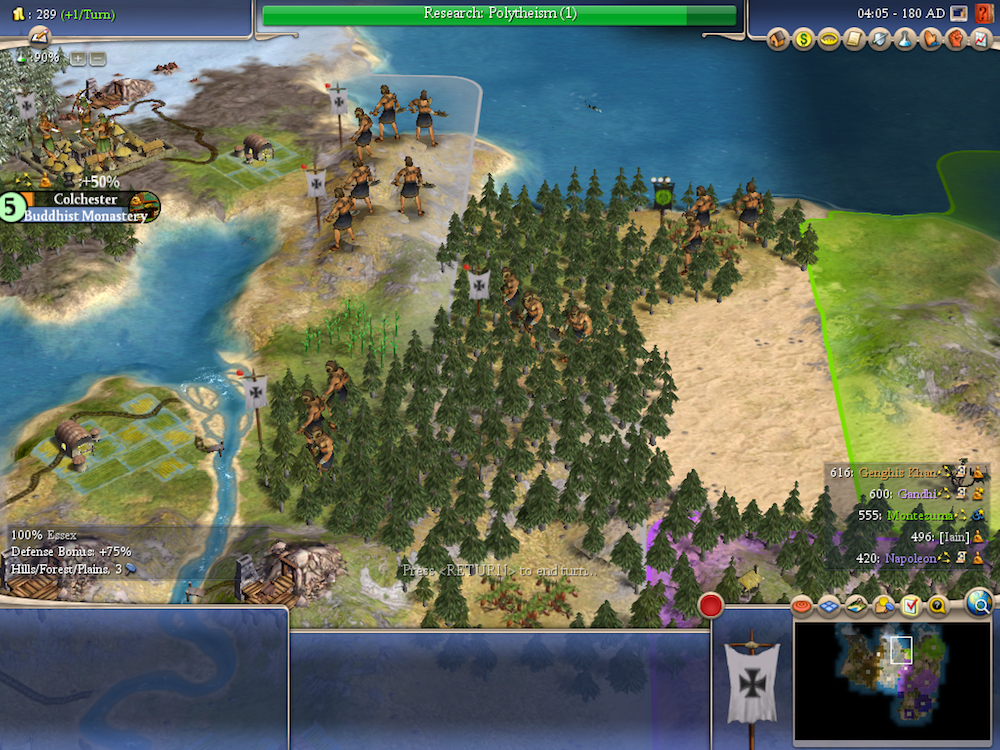 I split my forces into two groups. Oasis and Pulp take the hills that stand between the Aztecs and Colchester. Teenage Fanclub and Suede move behind the River Chelmer to protect Chelmsford. My God, here they come. Their drums echo in the night. They are terrible. 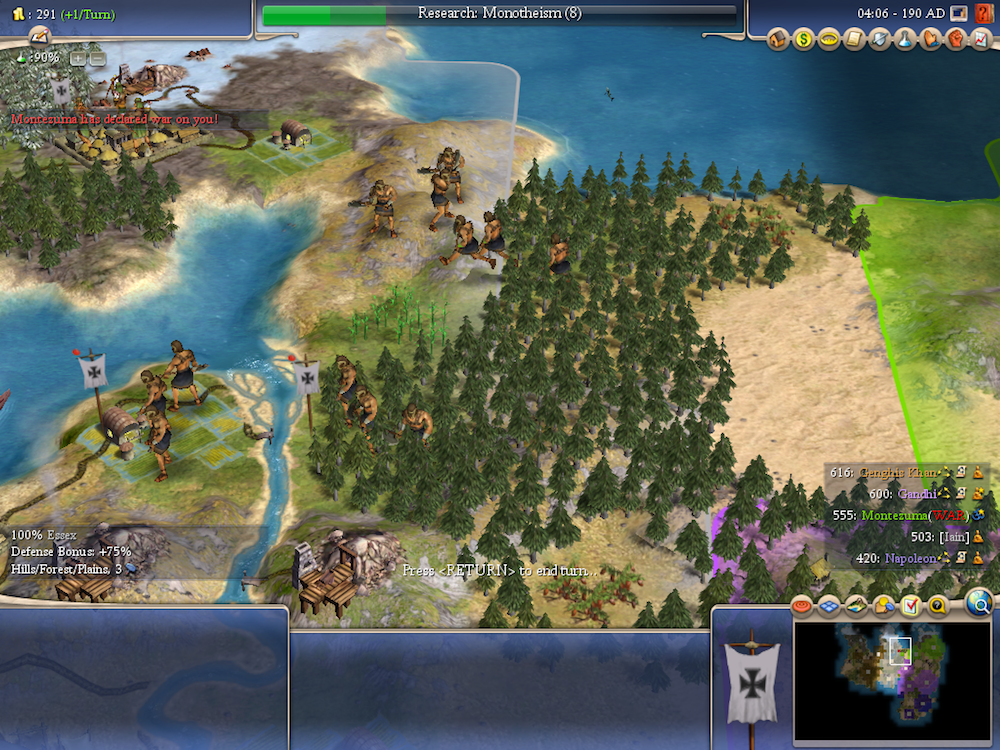 The fight is short and brutal. Hordes of super-charged, combat-ready Aztecs bound up the hillside and lay waste to my men. Oasis are killed by the first wave, their catchy, but derivative sub-Beatles melodies proving no match for hot steel. Liam Gallagher always strutted through life like a God, but he died as easily as any mortal I have known.

Pulp put up a better fight, destroying one unit of axemen and damaging another, but any hope of us meeting up in the year 2000 ended in 190AD when Jarvis Cocker took an axe in the back, his lifeblood spreading quickly across his crushed velvet jacket. This was a cruel slaughter and I was forced to watch it all. There was nothing I could do. Behind the river, Teenage Fanclub and Suede wept as the sound of screams drifted in from the hills. 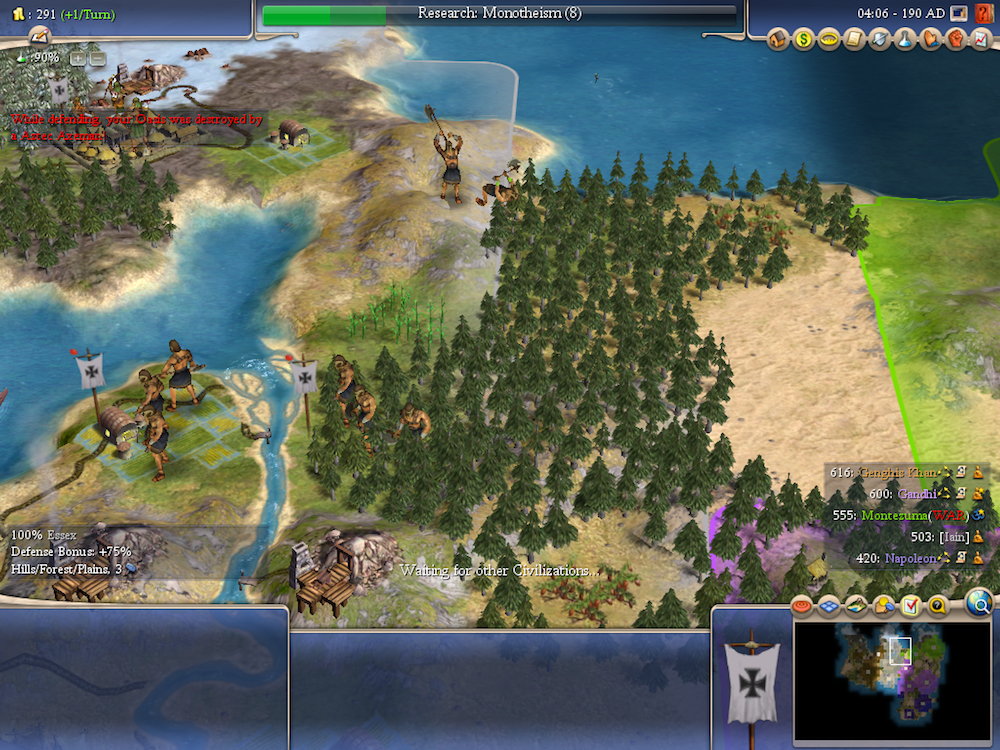 With the attack over, Montezuma does me the honour of officially declaring war. Thanks. For. That.

My civilization is bruised and bleeding, but we will not yield easily. My walls stand strong and my archers have quivers filled with feather-tipped retribution. He can throw whatever he likes at us, but we WILL hold our cities. And when I’ve invented catapults, I will march into his territory, set his farms ablaze, degrade his sheep, spit in his tea and finish his crossword before he’s even opened the paper. There will be a reckoning for this atrocity. 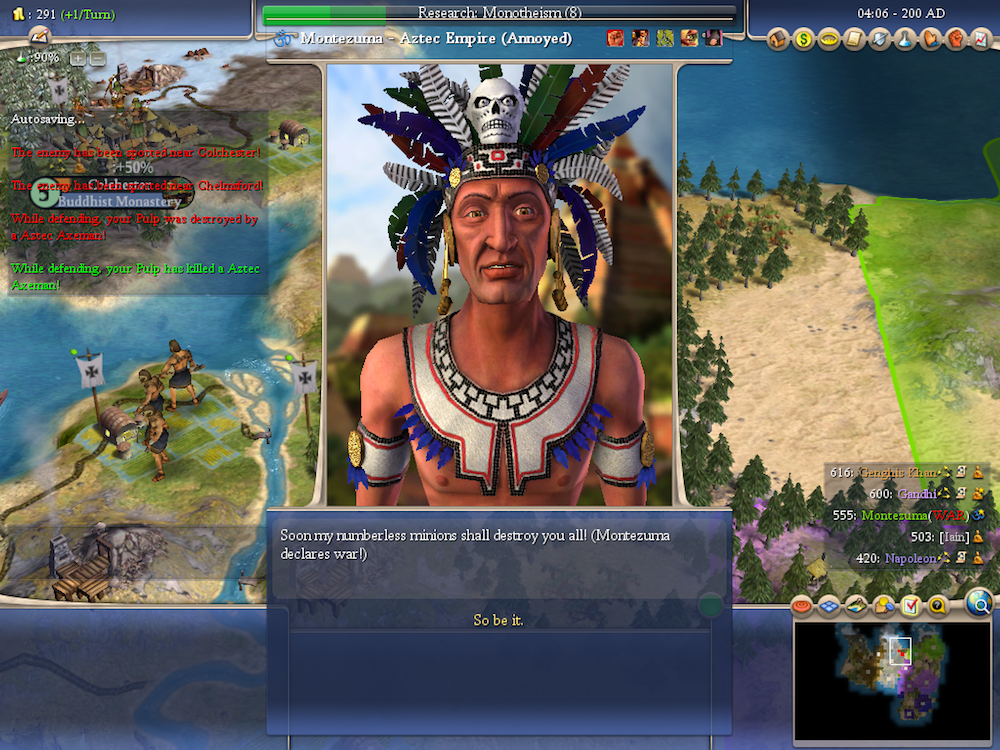 It is 200AD. I am about to put Essex on a war footing. Total war. No more aqueducts, no more monasteries. I want catapults and axes. I want vengeance. I want Montezuma’s head on a spear and for Essex’s best comedian to jerk his gaping chin up and down while I drink his wine cellar dry and smoke his cigars. It’s not much to ask. 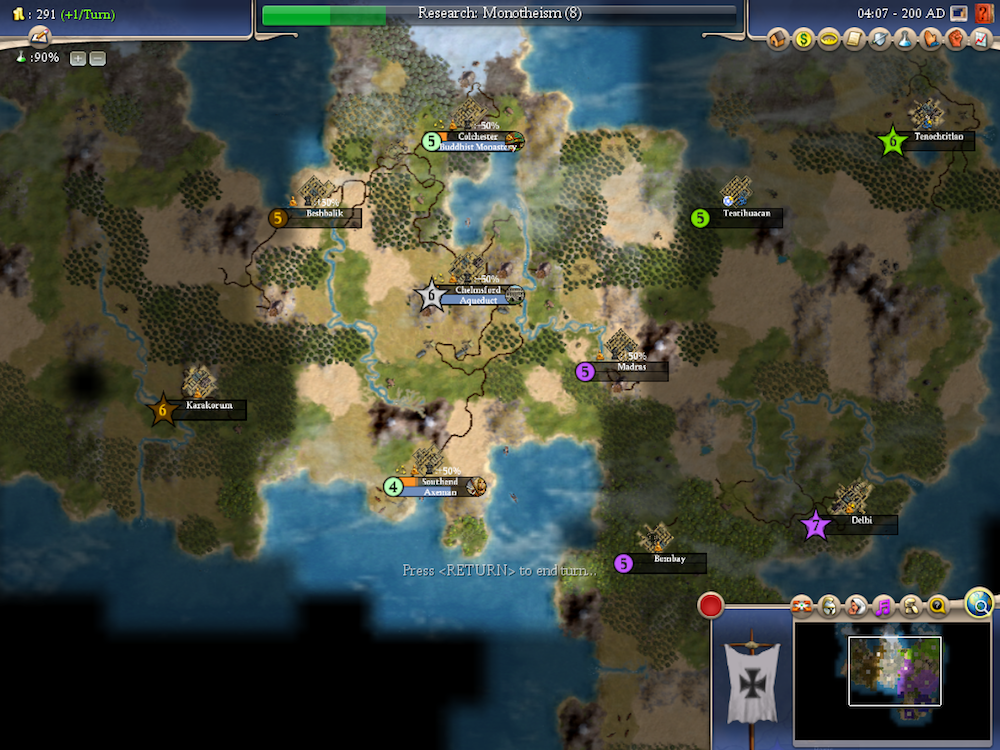