Can a man who failed so miserably with Everton perform any better when bestowed with immortality and granted complete control of an ancient society of hunter-gatherers? Will he win the space race or die in the dark ages? Find out now because my wife left me and you are all I have left.

These are dark times for the people of Essex. Literally, because we are still at least fifteen hundred years away from the invention of electricity, but metaphorically too because of the unprovoked Aztec invasion that threatens our existence. Oasis and Pulp, two of our finest units, were cut down in the hills outside Colchester, slaughtered by axemen. Jarvis Cocker’s misshapes took out one Aztec unit, but two more, promoted and carrying terrifying combat bonuses, now approach our cities. We are in grave danger and we can call on only three units of axemen to protect us. 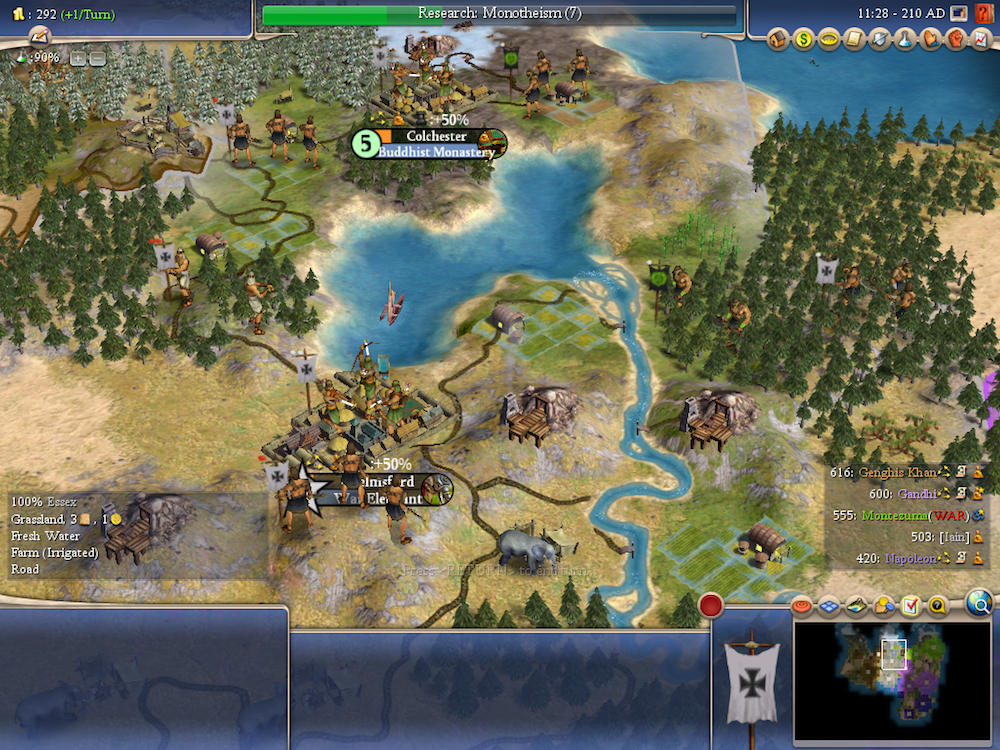 Suede stand bony-shoulder-to-bony-shoulder in the forests east of Colchester, fortified and protected, to provide valuable reconnaissance and beguiling sexual ambiguity. Blur race to reinforce our capital city of Chelmsford. Teenage Fanclub head north to secure the copper mines. If the Aztecs take them, we’ll be unable to produce any more axemen. And then we really will be in the brown stuff. 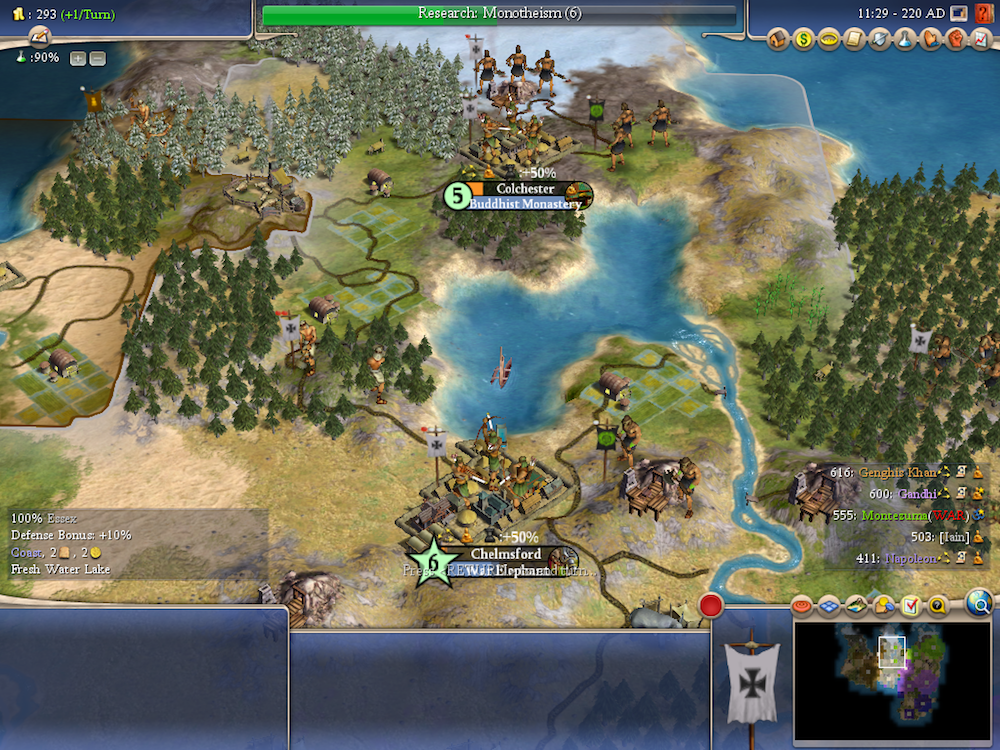 The Aztecs hit our capital first, pillaging the mines and then charging towards our Bananarama-fortified city walls. The Aztecs are brave, but they’re not clever and besides, it ain’t what you do, it’s the way that you do it. Even super-charged axemen are no match for Siobhan Fahey and the girls. Chelmsford holds strong and the south of our nation is clear. 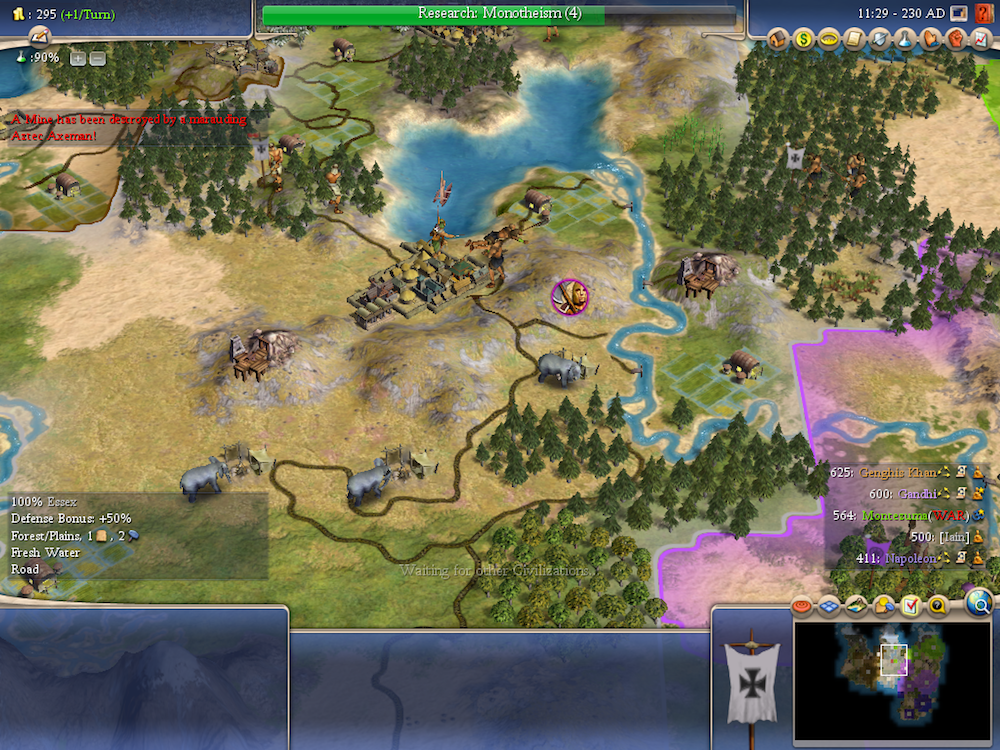 Alas, it’s a different story in the north. Teenage Fanclub defend the copper mines with all the resolve and courage that you’d expect of one of Scotland’s finest pop exports. Scores of Aztecs fall under the whirling axes and delicate harmonies of Norman Blake and Raymond McGinley, but not enough. Not enough.

The invaders overwhelm them and turn the snow crimson with their blood. But their names will echo through history. We may even make ‘Sparky’s Dream’ the national anthem. The surviving Aztecs are a pitiful band and are easily eliminated by a vengeful Depeche Mode. We have repelled the invasion. Essex is safe. And now…allow me to retort. 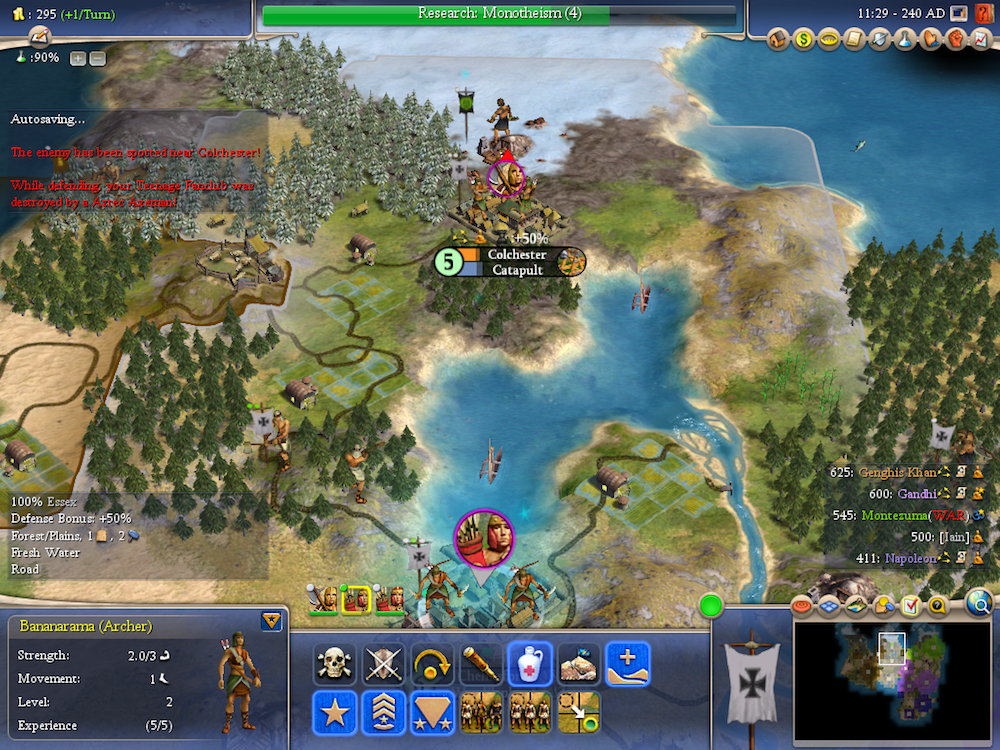 Every resource is directed to the war effort. If we cannot take down their axemen with our own, perhaps we can do it with elephants. Behold, the fearsome aggression of muscle-bound renaissance man Henry Rollins. Elephants cannot fortify and have no defensive bonuses, presumably because they find it difficult to hide behind trees, but they have a strength of 8, which is considerably stronger than an axeman (5). With the help of some catapults, I intend to wreak bloody havoc in the east. They will pay for what they have done. All I need is about 100 years to build a task force. 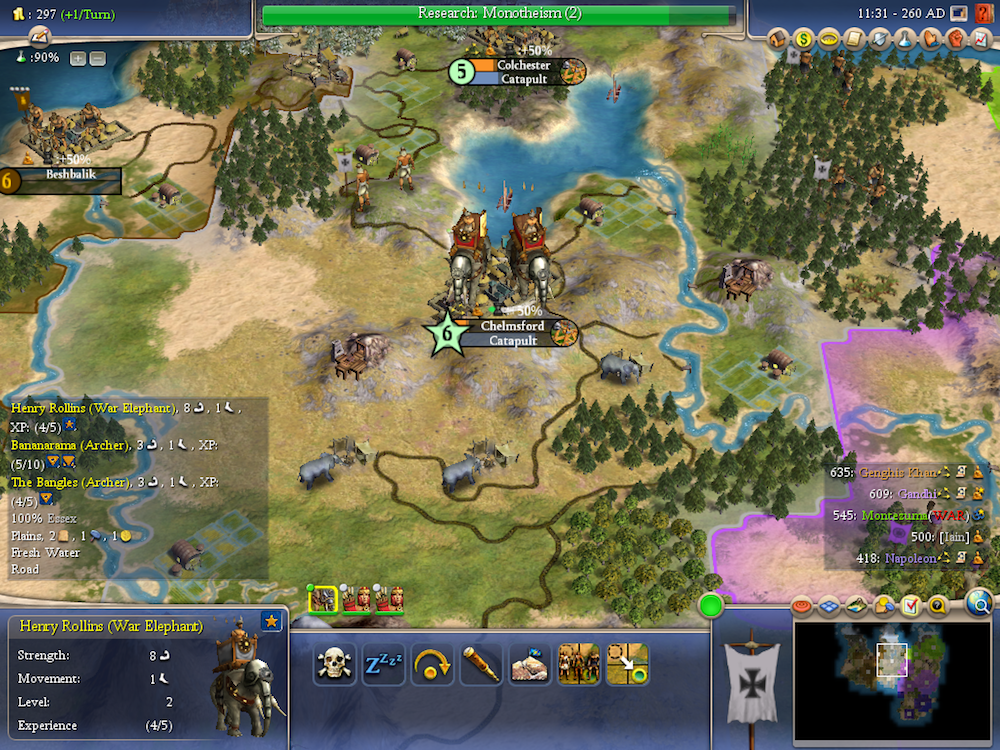 But all I get is 30 years. I destroyed everything they sent over the border, but they still have more to give. They must have incredible resources at their disposal. First a lone axeman sneaks through my lines, then another axeman and two spearman follow. I can’t hold them off, but there are alternatives to fighting. I scarper back towards Chelmsford and try to lure them into vulnerable land from the other side of the river. 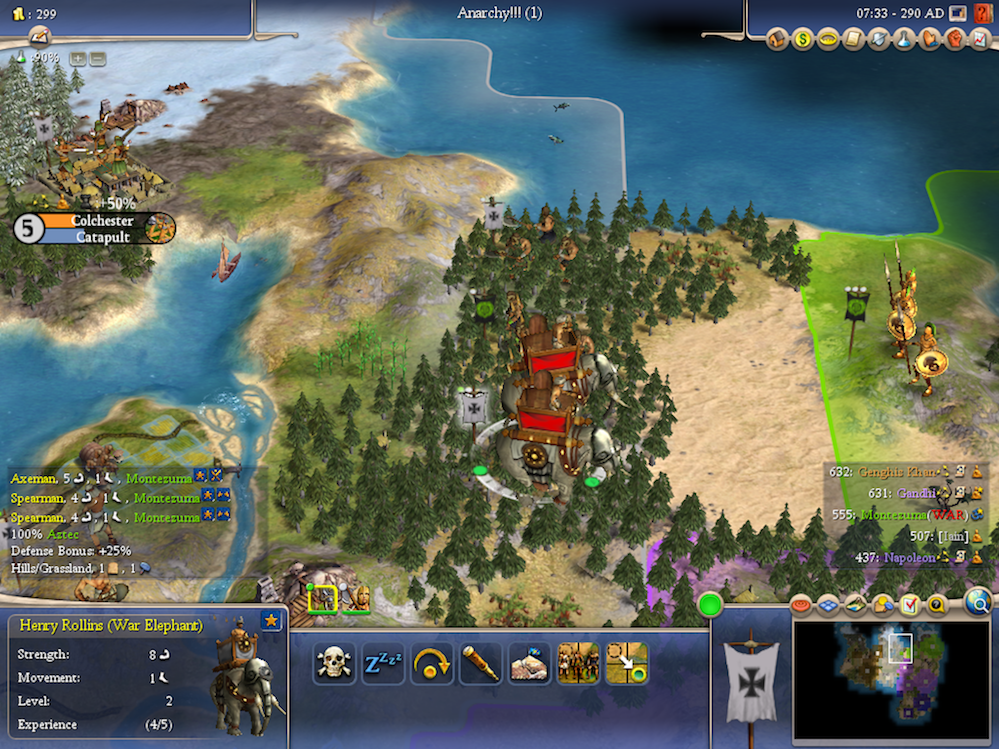 And it works. The lead axeman barrels down the hill to flat, undeveloped farmland that offers no protection at all. It’s the last mistake he ever makes. With a roar of righteous fury, Henry Rollins clatters across the River Chelmer and stamps him into the ground, before withdrawing to safety. 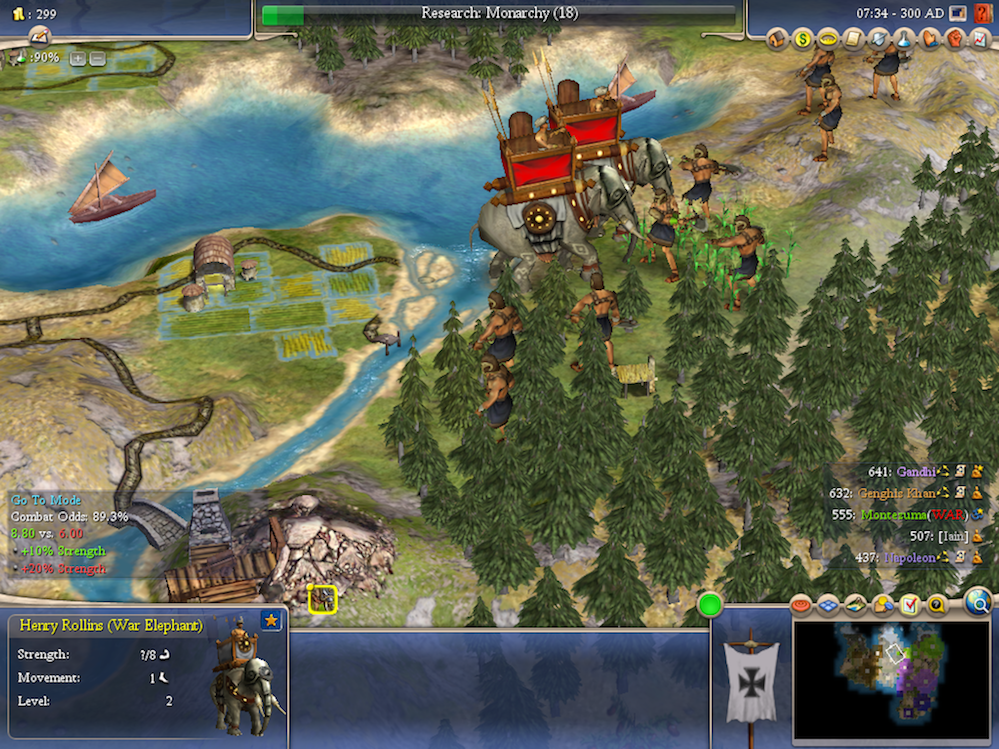 But Henry isn’t strong enough to mount another attack yet and the remaining force of two spearmen (deadly to mounted units) and one axeman is able to cross the river and take up position on the hills outside Chelmsford. Suede aren’t strong enough to fight Aztec axemen, especially in hilly terrain, but if they’re not stopped they could pillage the entire area, devastating my productivity. They have to be stopped. And they can be stopped. At a cost.

Meat Loaf, my first catapult unit, is ready. When you get attacked by someone like Meat Loaf, you stay attacked. Catapults damage multiple units if they’re in the same tile. The only drawback is that it’s highly likely that Meat Loaf will die in the assault. But he says that he will do anything for Chelmsford. Including that. 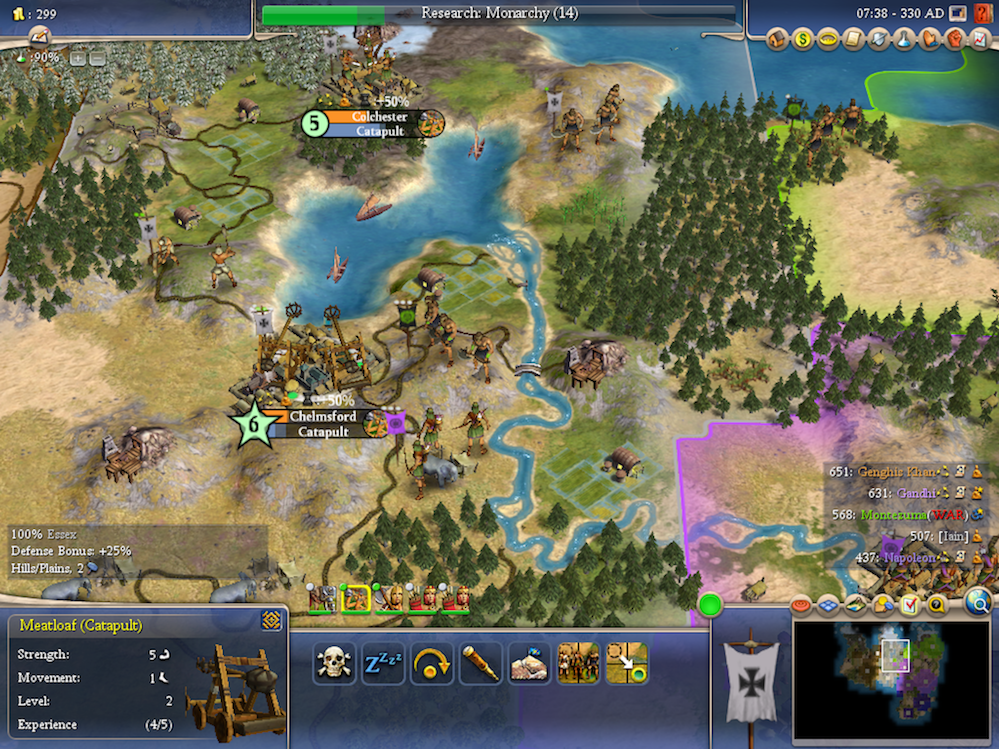 It begins. And much like the ten minute album version of ‘Bat out of Hell,’ the noise seems to last forever. But when the dust settles, the Aztecs are grievously damaged. Meat Loaf, sadly, is no more. Into the melee leap Suede, all cheekbones and swirling guitar solos. An Aztec spearman falls. 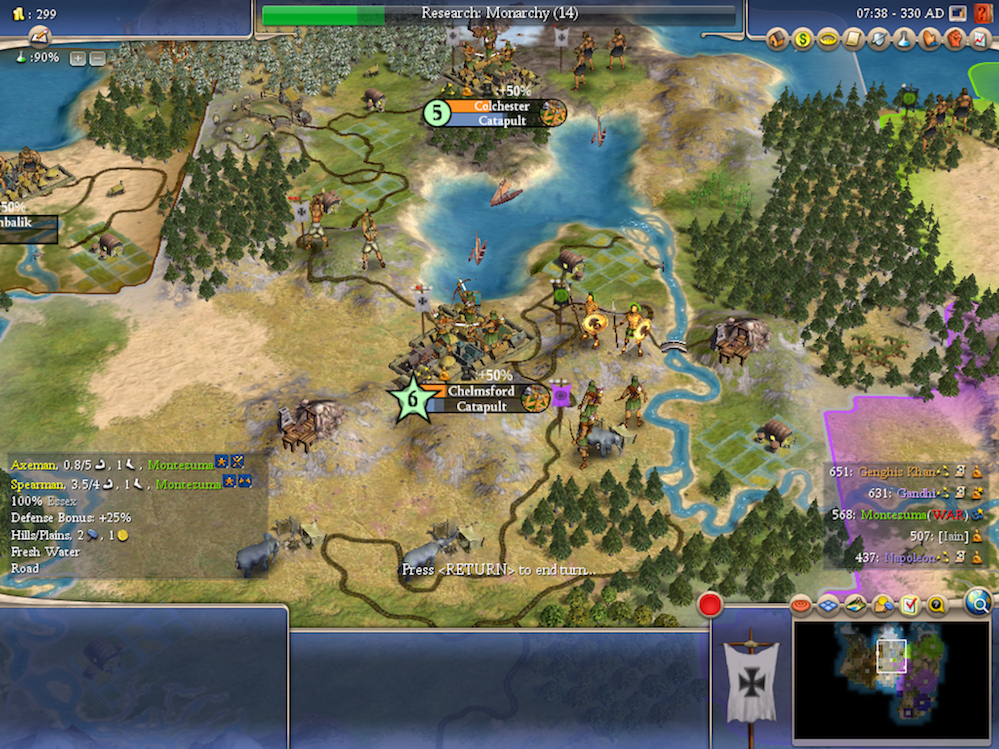 The survivors try to make a break for it, but Rollins is too quick for them. There is no mercy. There are no prisoners. I couldn’t stop him now even if I wanted to. And I don’t want to. 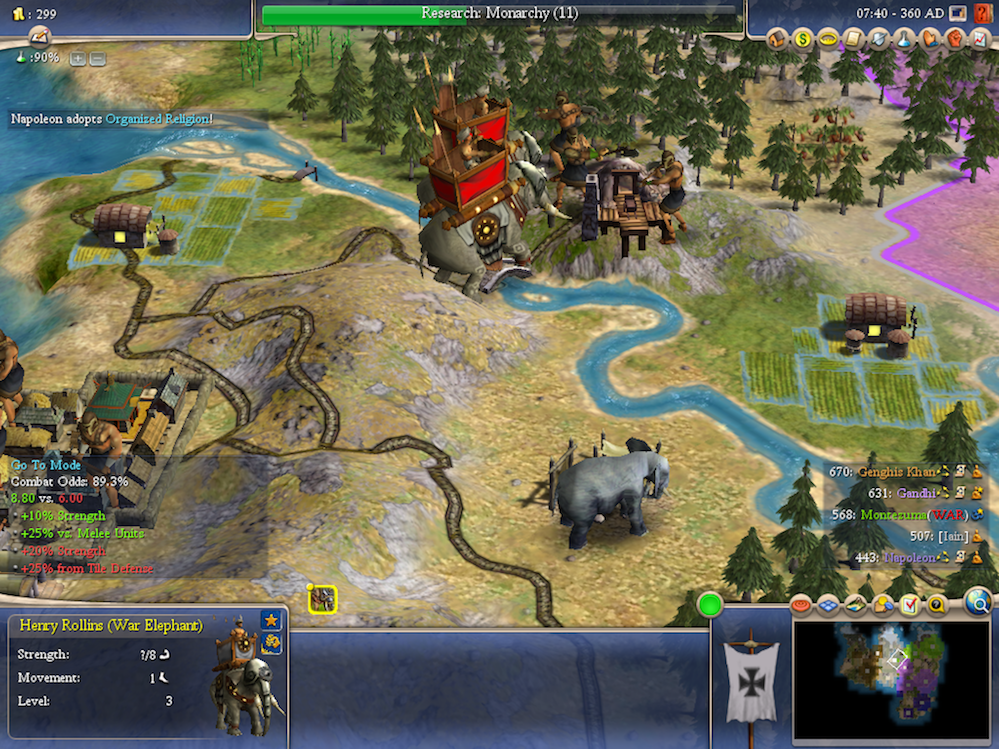 With our borders clear once again, guess who gets in touch? Montezuma wants to talk peace. Not a chance. Not now. I’ve killed six of his units for the loss of just two of my own. I’ve got the momentum. And when I’ve got four catapults to my name and four fighting units to back them up, I’m taking one of their cities. No, Montezuma, you can stick your olive branch up your arse. You owe me a debt of blood and I intend to take every drop of it. Plus interest. And a punitive charge for writing this letter. 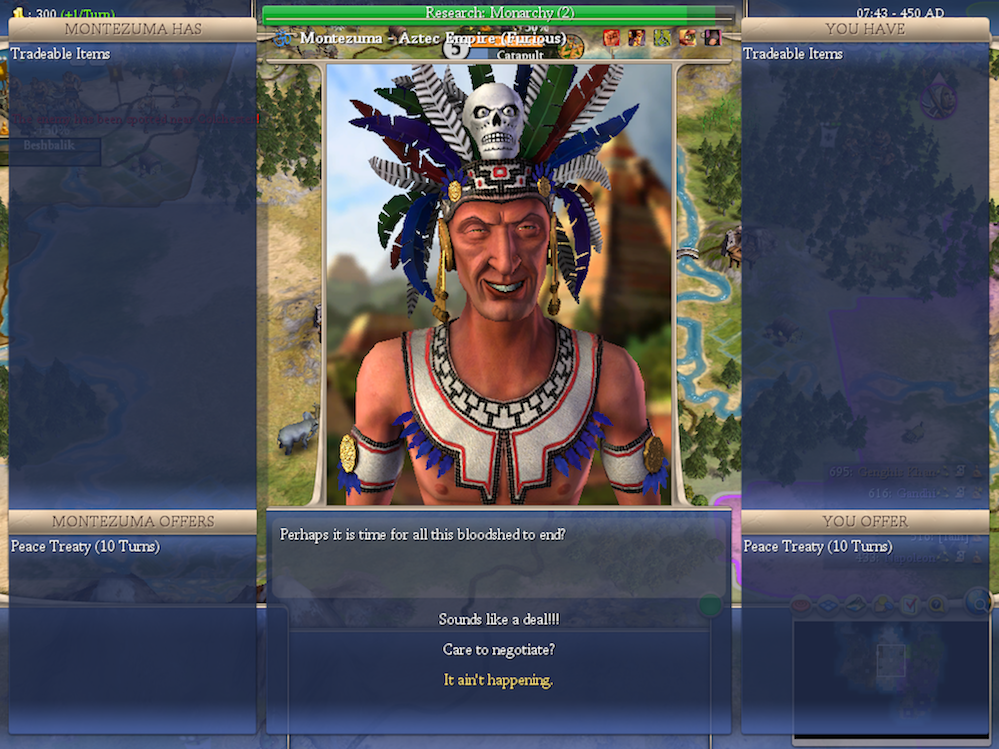 Almost immediately, I see new forces massing in the east. Three groups of axemen/spearmen partnerships. We’re outnumbered and unprepared. And you know what? 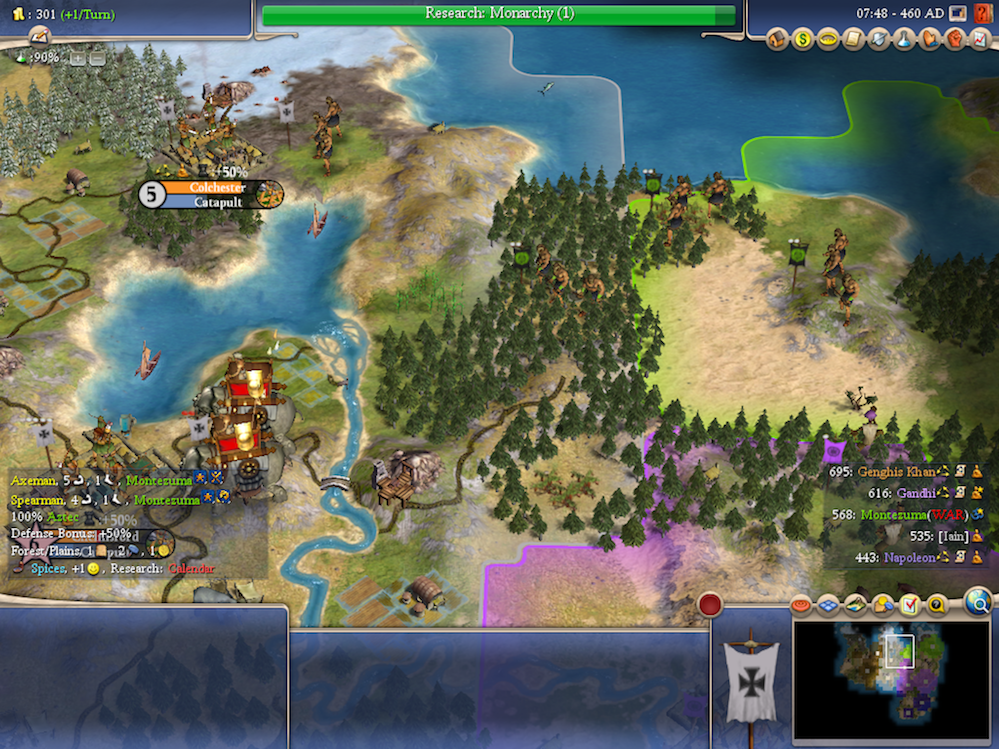 Maybe it is time to give peace a chance. For now. But this isn’t over. The people of Essex will never forget what happened here. They will never forget how the Aztecs invaded our land, killed the cream of Britpop and laid waste to our farms. And they will never forget that Meat Loaf laid down his life for the city of Chelmsford. A peace is agreed, our forces fall back… 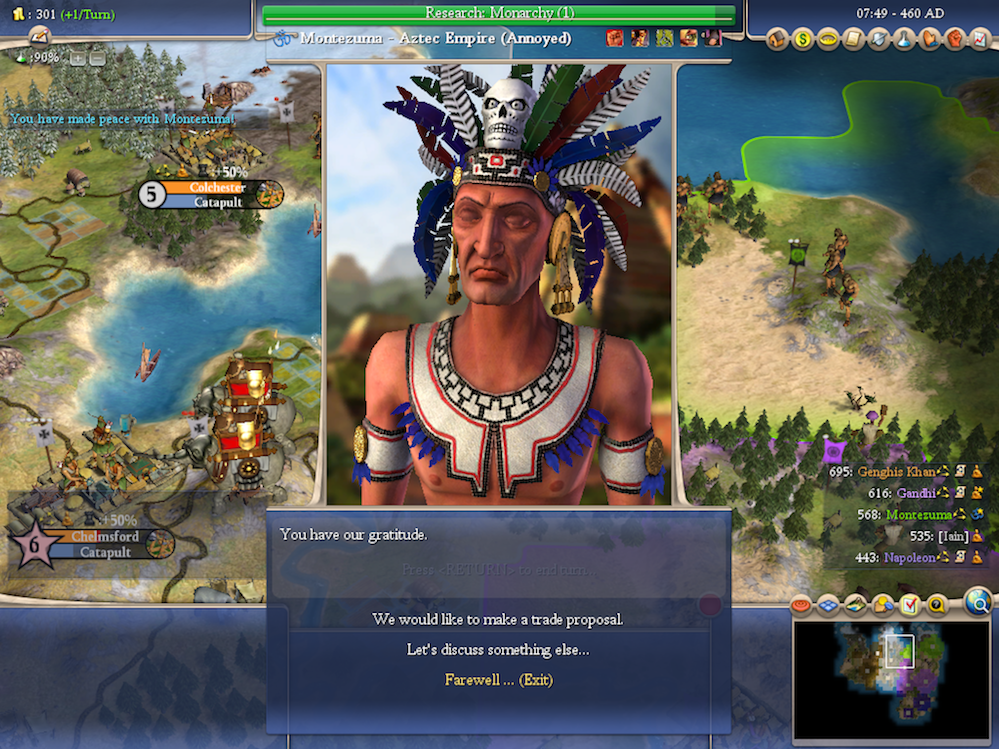 But as day turns to night, an ominous clanking echoes through the streets of all three of our cities. Ready the catapults. Train the axemen. Next time, we’ll be ready. Next time, we will end them. 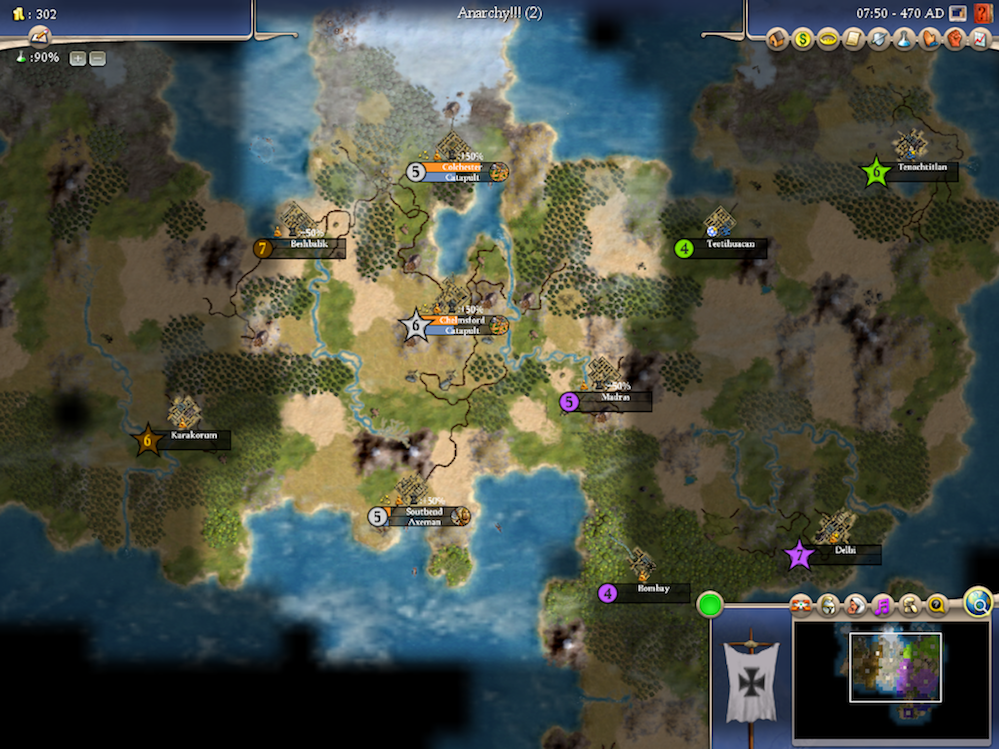