Can a man who failed so miserably with Everton perform any better when bestowed with immortality and granted complete control of an ancient society of hunter-gatherers? Will he win the space race or die in the Dark Ages? He’s certainly given the Aztecs a good seeing-to. But what now?

It’s 820AD and the first great war of this world is over. Essex 1, Aztecs 0. We have cut down the best of their fighting men, we have conquered two of their cities and we have renamed them in our own custom. I look forward to the development of Basildon and Clacton. But here the war must end. If I wipe them out, I only leave more room for someone else to expand in their place. Better to have three weak rivals to my east squabbling amongst themselves than to allow one of them to grow and test my patience. We will have enough to contend with to the west, where the Mongols grow quietly powerful. 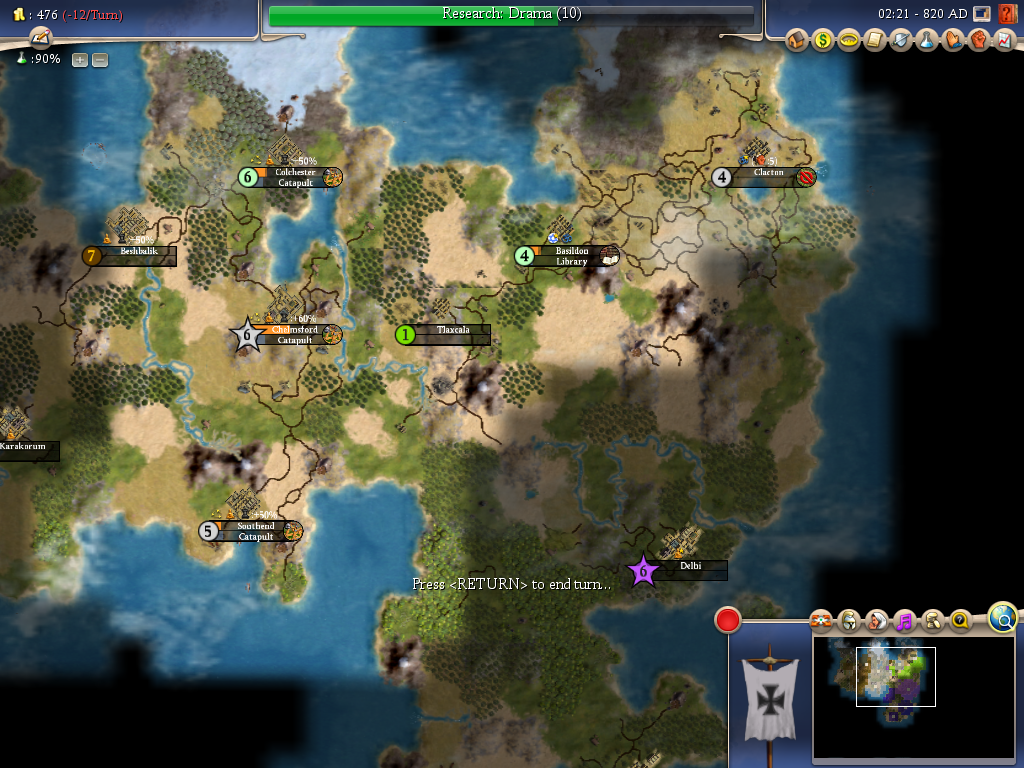 And so, although I would dearly love to rub his face in his own vomit, I make peace with Montezuma. He may seek revenge, though that would be extremely stupid given the size of my battled-tested army, but I rather hope he’ll focus his attention on someone else now. 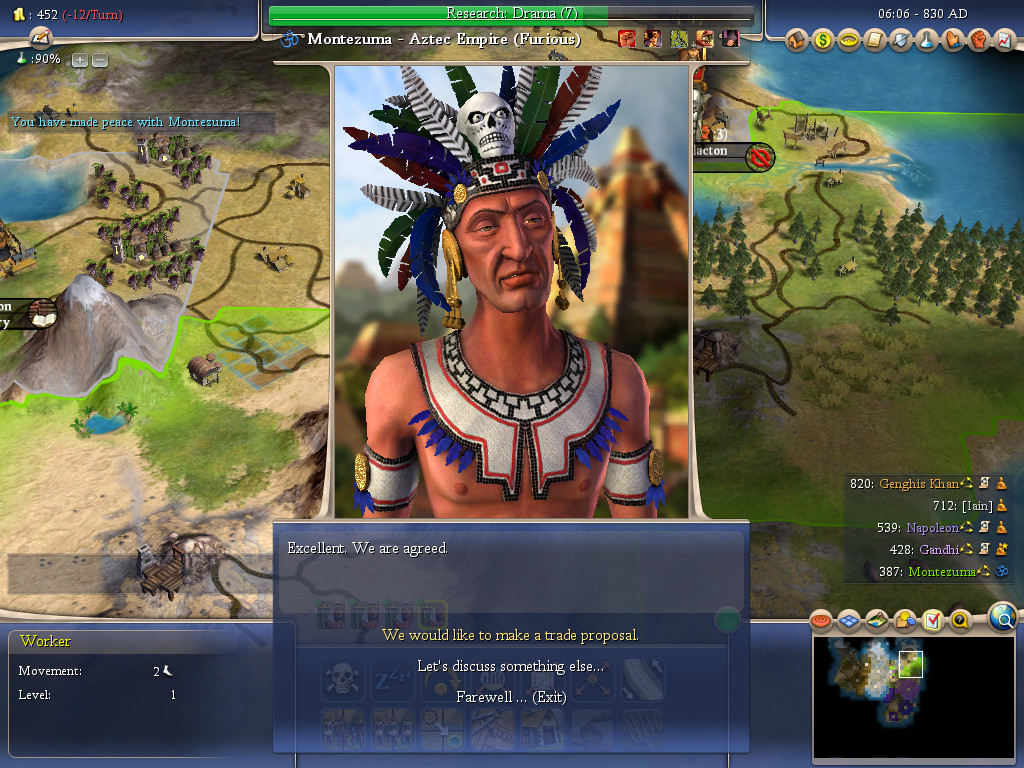 And so it is that Essex embarks upon a cultural revolution. Culture, you see, is very important. It’s what pushes those coloured borders out around our cities. When the people see our theatres and our libraries, and more importantly, our hanging gardens and our lighthouse, they’ll be desperate to be a part of it all. And that includes that irritating little Aztec city between Chelmsford and Basildon, control of which is likely to pass to us very soon. 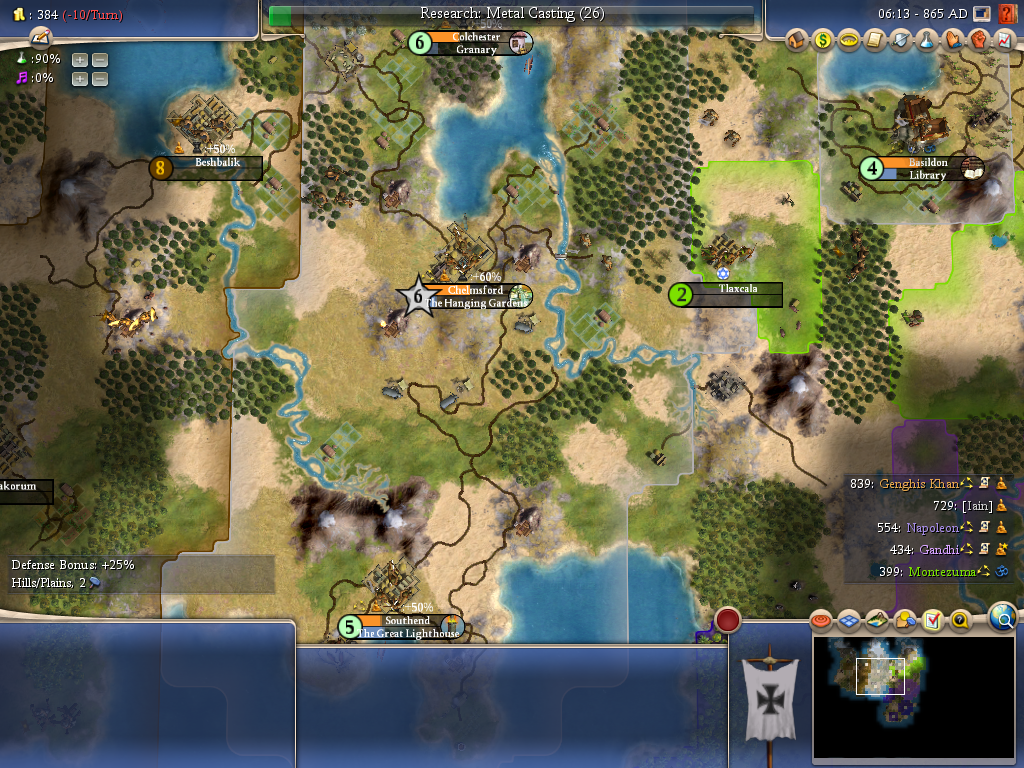 And sure enough, there’s a revolution there in 940 AD. It’s not successful, the first one never is, but the next one will do the trick. Especially now that Basildon and Clacton are building libraries of their own. Of course, I am a little concerned that some Aztec settlers have sneaked up to the north and built a new Tenochtitlan. How original. But I’ll deal with all that in due course. In the meantime, we have replenished our catapults (welcome to the team, John Martyn, Mama Cass and Joe Cocker) and we’ve sent a new axeman to guard the Western frontier with Mansun (and hello to the Bluetones.) 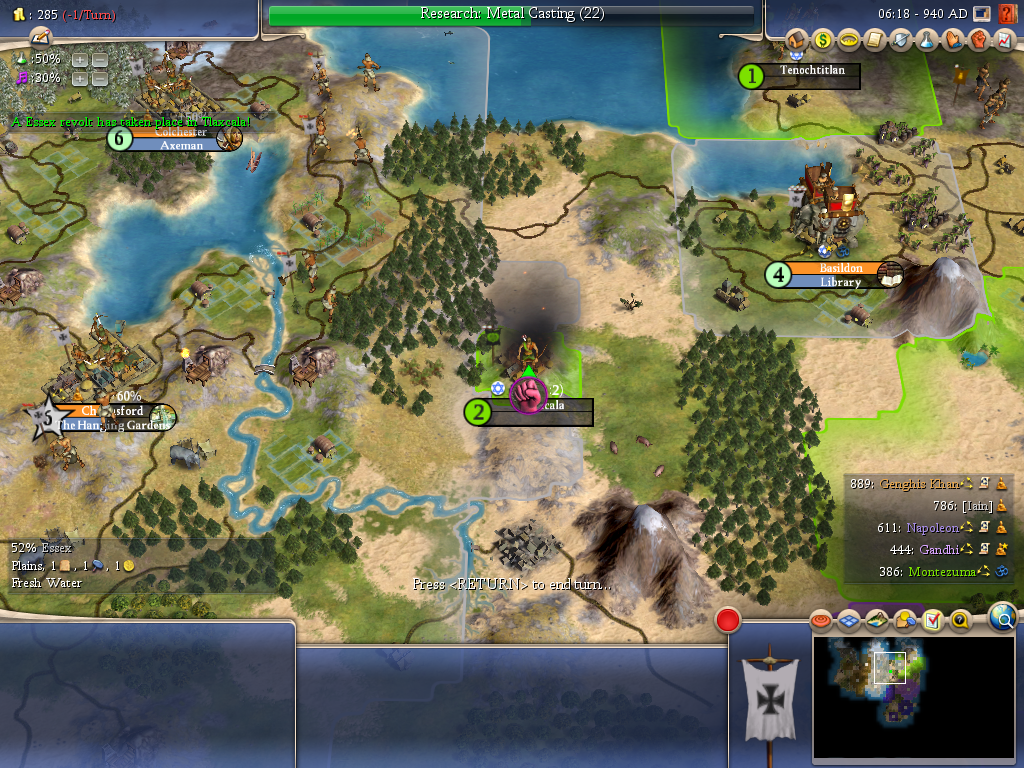 With the help of some cultural grants, siphoned from our science budget, Basildon expands. Sadly, so too do the Aztecs. Another small city appears to the north of Clacton. They must be mad. They’ll never get anywhere building cities in the snow. Not until the late stages of the game, of course, when there’s a chance they’ll find oil or aluminium. But there’s a long way to go before anything like that happens. 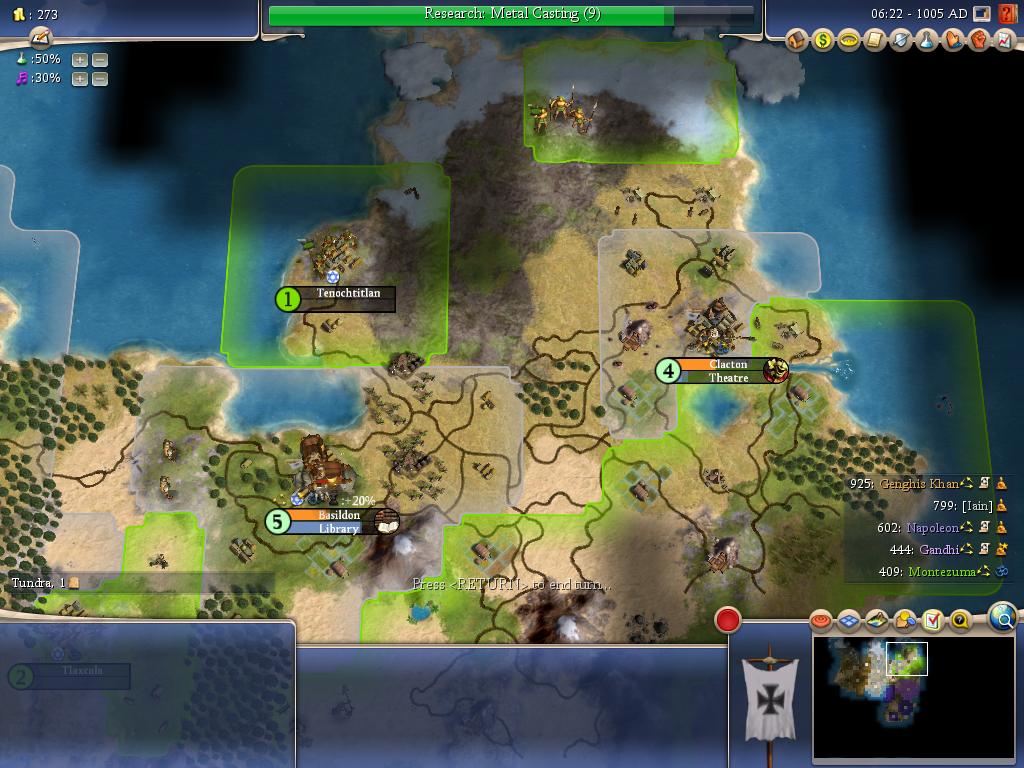 And so, as the new millennium dawns, we unveil our first wonder of the world. Behold, the Great Lighthouse of Southend. It’s not quite as good as the real life pier, obviously, but it’s pretty fancy and it’ll give a whopping great cultural boost to the city, along with some trade benefits that are simply too boring for me to tell you about. 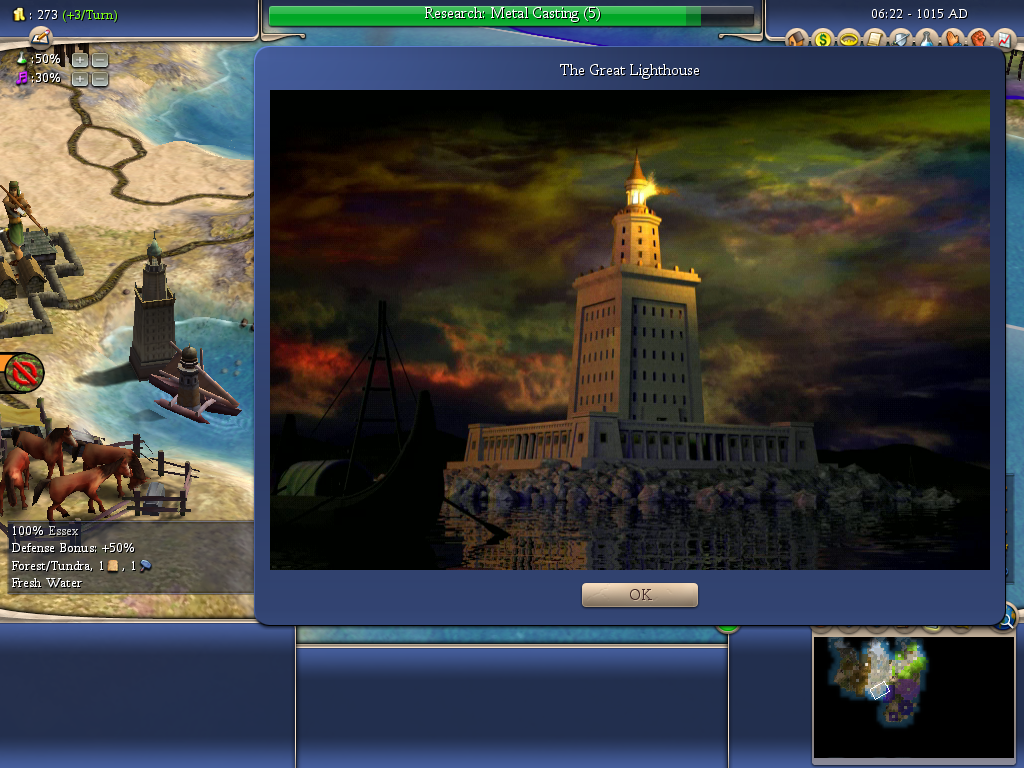 And behold, the Hanging Gardens of Chelmsford! This brings a huge population boost to the empire as well as significant health benefits and the obligatory cultural adrenaline shot. Chelmsford hasn’t had this much to crow about since the Mike Flowers Pops played the first V festival in 1996. 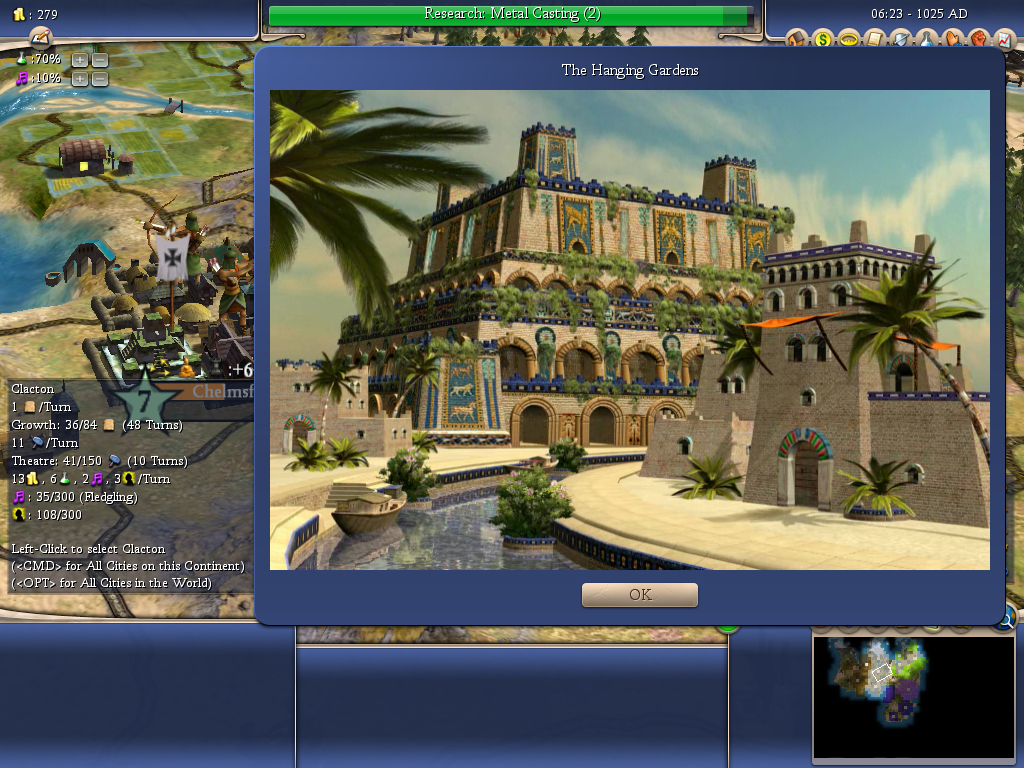 Now that there’s a lull in what has been perpetual war with the Aztecs, I’ve had a chance to train a new scout, Lonnie Donegan, and send him to map the Mongol lands. It appears that they have quite a lot of cities. It also appears that the Indians, fleeing French persecution, have set up two new cities themselves, right on Ghengis Khan’s borders. I am sure that this is a foolproof plan with absolutely no potential to end in bloodshed. 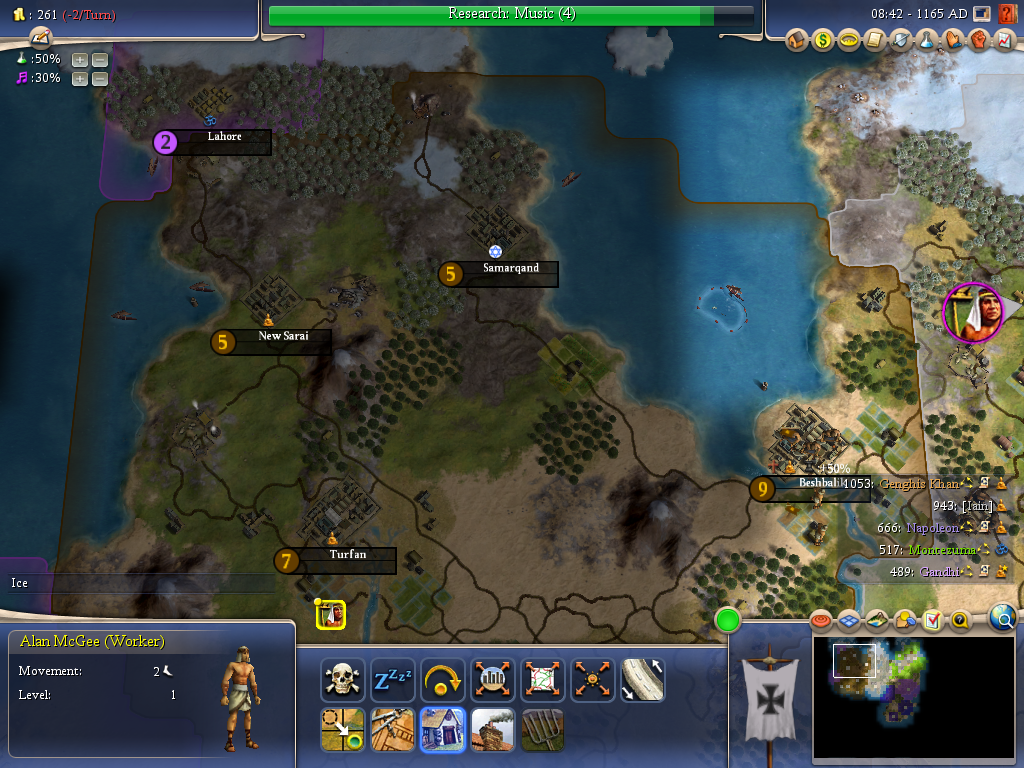 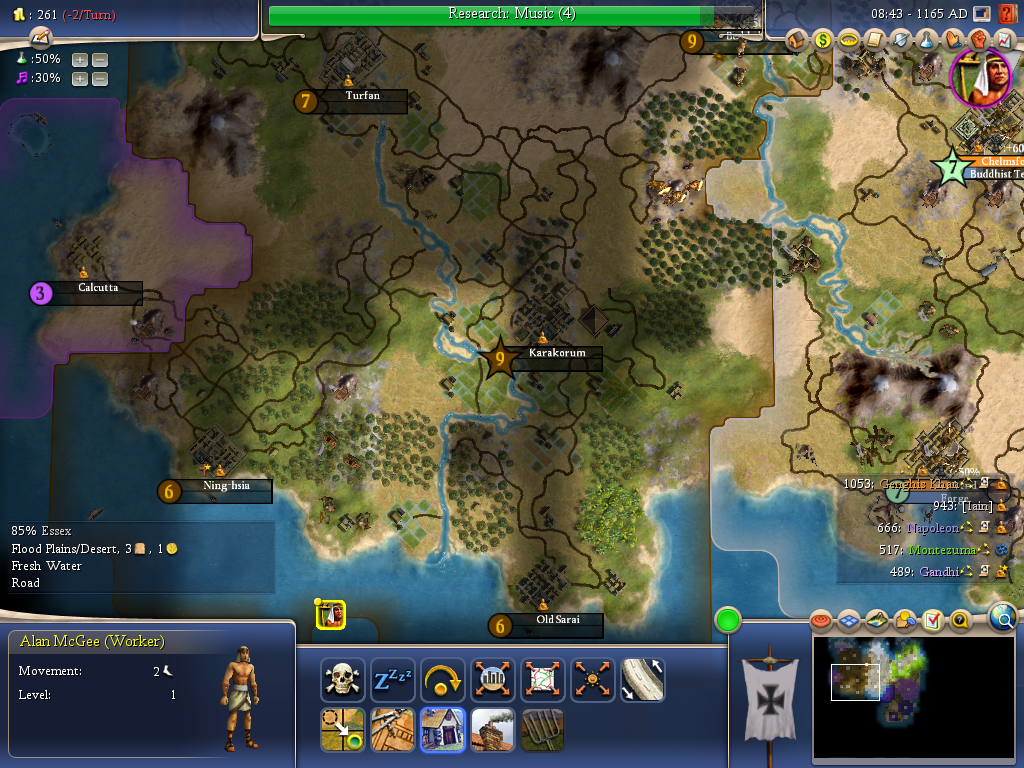 But we’ve got a new city as well. The flood of culture in the heartlands of Essex has convinced the people of Tlaxcolo to shake off Aztec rule and join us instead. This is a small, but potentially prosperous location where trains can stop for a moment and then head onwards either to Chelmsford or to Southend. I shall call this city…Shenfield.

And so, in the year of our Buddha 1274AD, we exist in a state of surprising and rather disconcerting peace. The continent is full. There is no room left for expansion. It may well prove that the build-up of population pressure leads to a new, and even more destructive conflict. We have the army to defend ourselves, should that be the case. But I think that the future lies overseas. I think that when we can invent a boat that can travel the oceans, there is another world out there, waiting to be conquered. But hey, I thought that Elastica could comfortably take a copper mine from Aztec axemen. What do I know? 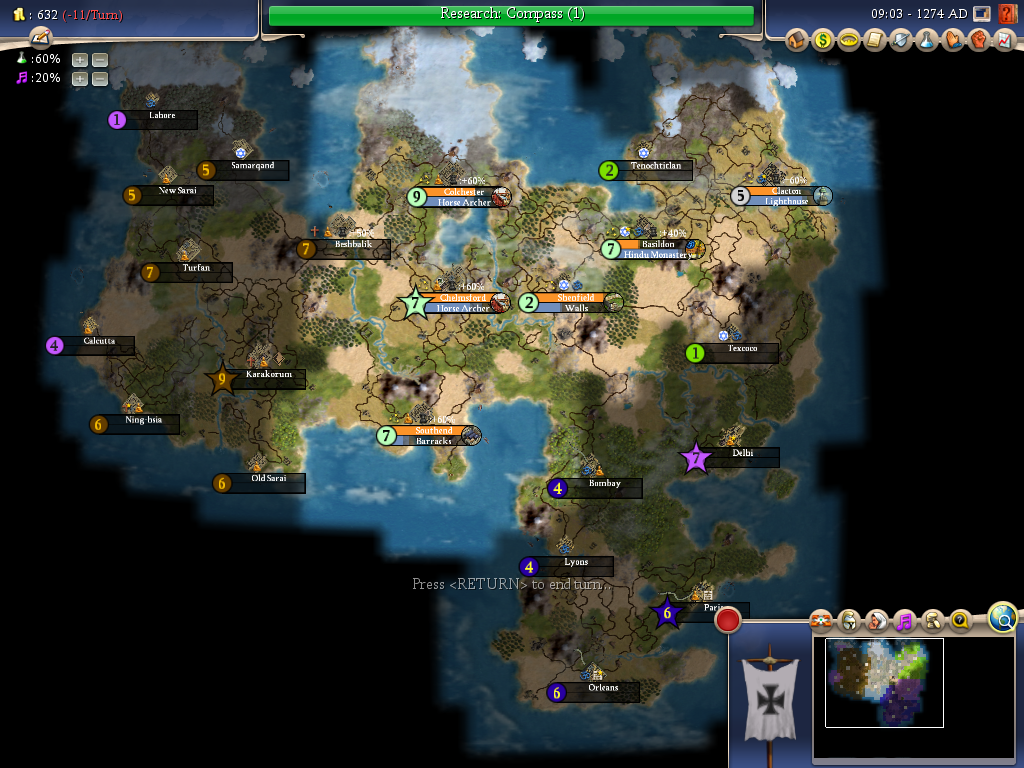