Episode 1 (Birth of a Nation); Episode 2 (The Race for Copper); Episode 3 (Love Me Tender, Love Me Dead); Episode 4 (The Hills Are Alive With The Sound of Screaming); Episode 5 (He Would Do Anything For Chelmsford. Including *That*); Episode 6 (On My Signal, Unleash Montserrat Caballe); Episode 7 (War Is Over. If You Want It…); Episode 8 (Behold, The Hanging Gardens of Chelmsford); Episode 9 (Hans? Are We The Baddies?); Episode 10 (The Essex Superstate Takes Shape)

We are not quite at ‘the sun never sets’ stage but just look at the breadth of the Essex Empire now. From the sands of Southend to the cliffs of Frinton, we dominate the continent. Yes, the Mongols are the undisputed power in the west and yes, they did just break off diplomatic relations with us on account of all the Aztec slaughter. But still, it’s going pretty well. 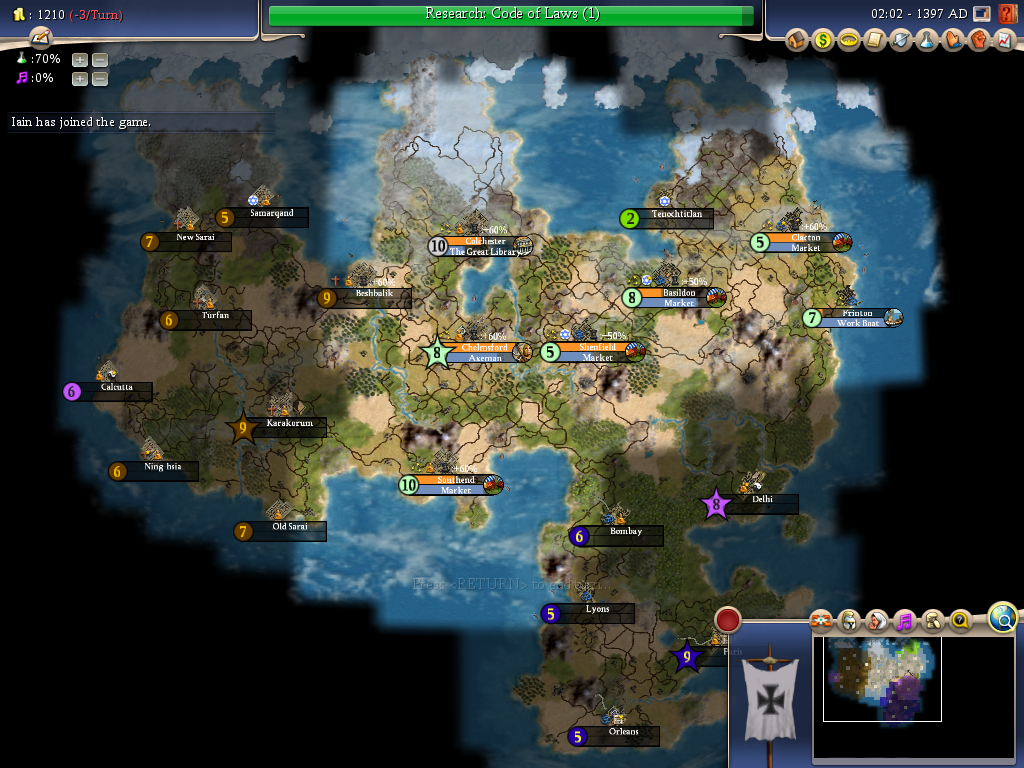 The priority now is to replace the military units lost to the Aztecs, which doesn’t take very long, and to redeploy them accordingly. That means that the east and west task forces from earlier will now become West One and West Two, holding position in two forts to the west of Chelmsford. 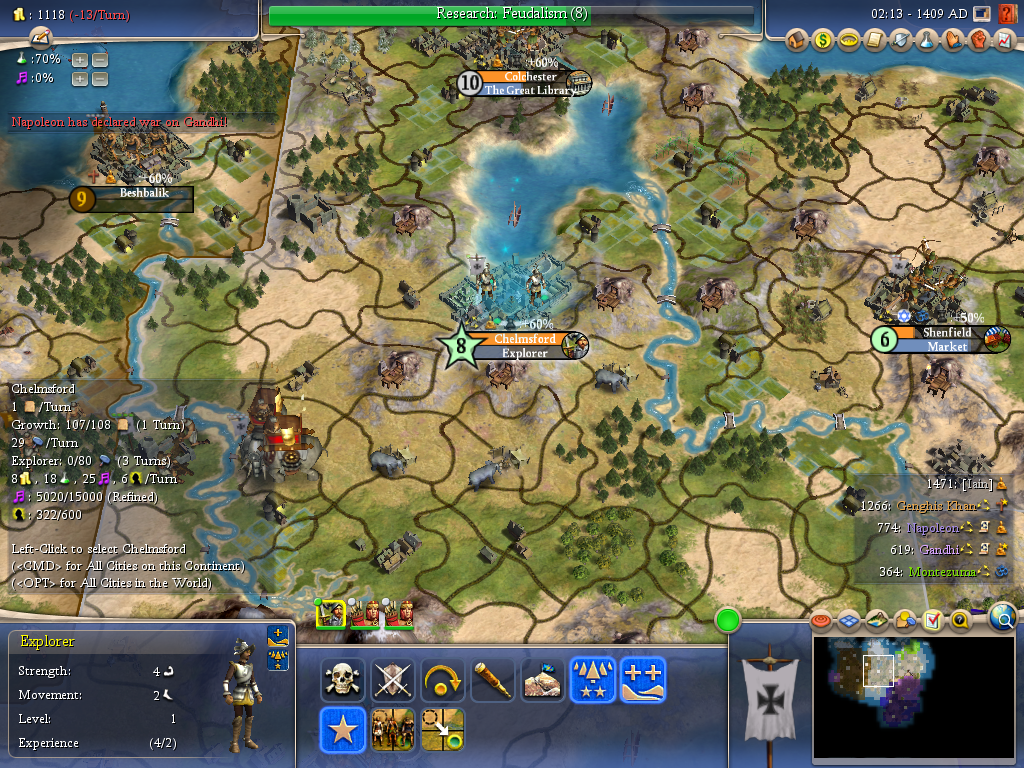 With that complete, the next task is to seek out the unknown. While all that fighting was going on, we discovered the technology required to build boats that can cross oceans. For the first time, we now have a navy. The HMS Sugarhill Gang will take our explorer Mick Jagger south-west. 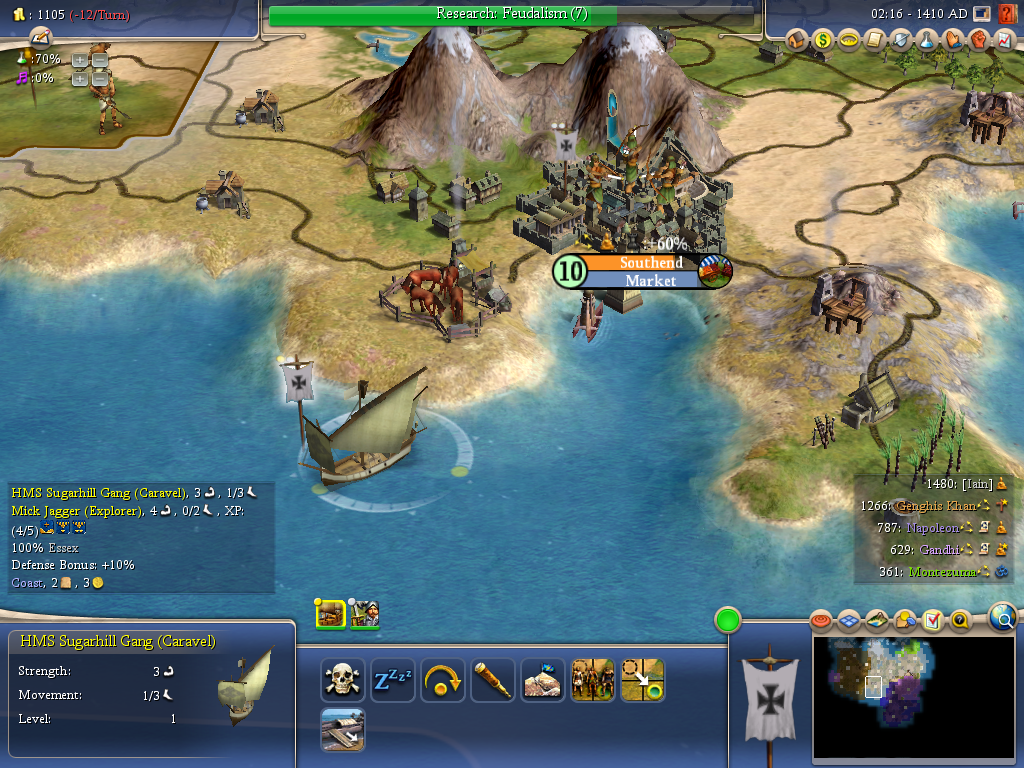 Meanwhile, the HMS N.W.A will take Keith Richards out east, where I suspect a new continent lurks. And while they’re boldly going, we can keep pushing on with our domestic policies. We have too many cities, you see, and our economy is overheated. We need markets quickly. 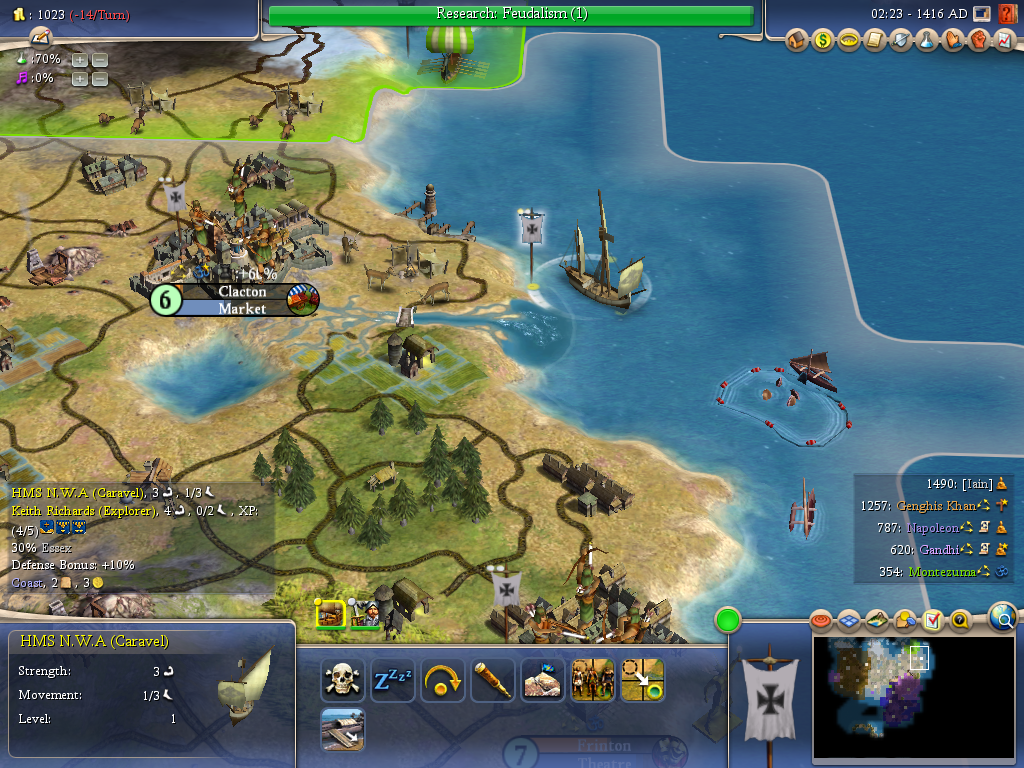 It isn’t long before the Sugarhill Gang make landfall on a new landmass south of the French empire. It’s cold and barren, but could prove strategically important. We can’t do anything with them until we invent astronomy, sadly. These valiant caravels will only carry explorers. But it’s good to know what’s out there so that we can marshall our resources accordingly.

In other news, Montezuma’s latest ploy is to declare war on our friends, the Indians. As much as I would like to weigh in and finish them off for good, I think that might very well draw the Mongols into a fight that I would probably win, but certainly don’t want to risk. 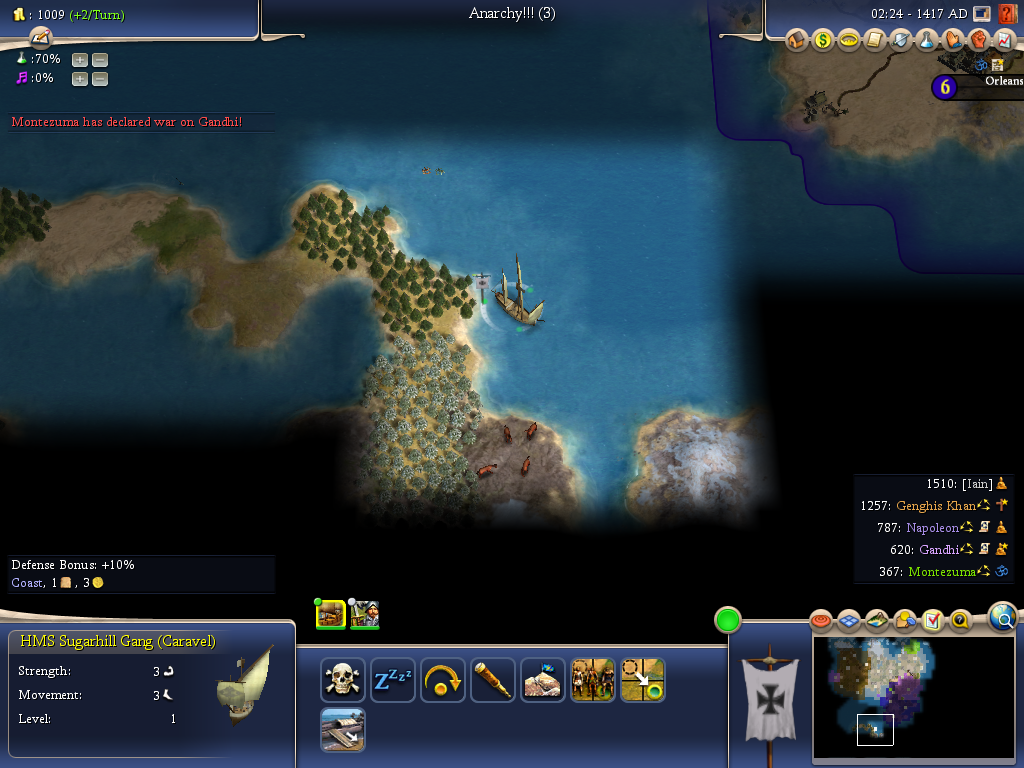 I’ve put together a little force to the south of Basildon; not much, but just enough to hold off anything the French might send up. I’ll now use that to keep an eye on the Indian conflict. The poor bastards are at war with the French too and I really don’t want them to lose. It’s one thing to have the Mongols at the front door, it’s another to have the French at the back gate too. 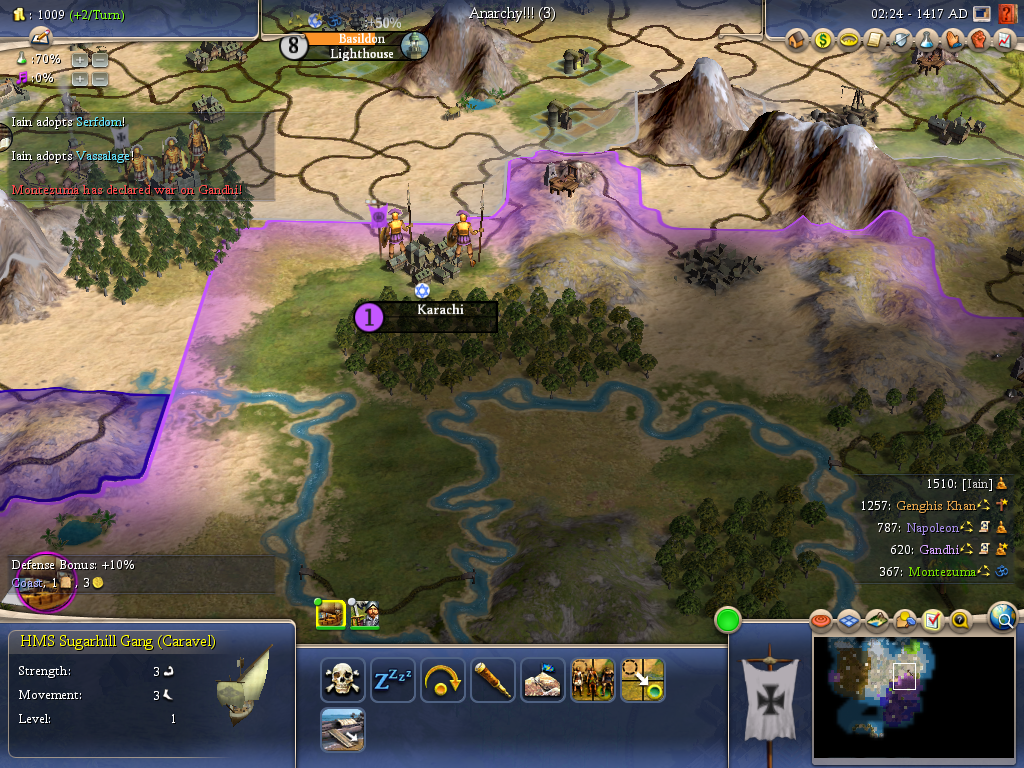 And, in the spirit of the Lend-Lease agreement, I’ll give Gandhi the technology of ‘Feudalism’ which will enable him to build longbowmen, twice as good at defending cities as your standard archers. My assistance, however, is not without its price… 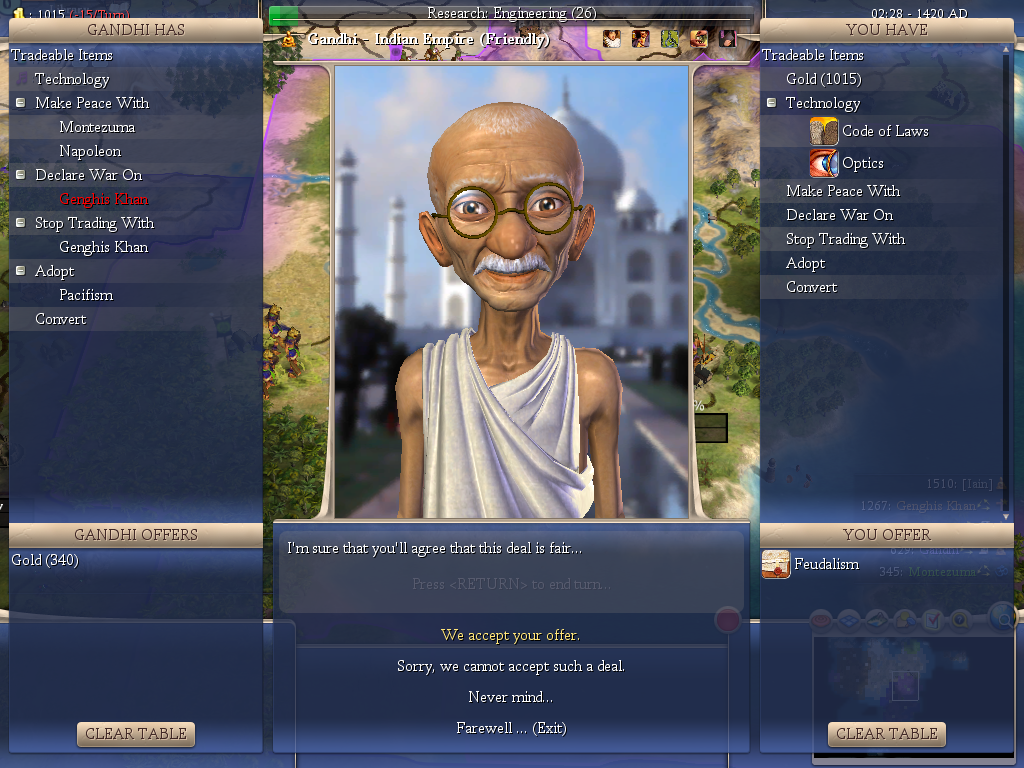 And my help, albeit my indirect help, continues when the cultural weight of Basildon finally swamps Tenochtitlan, or at least the latest incarnation of Tenochtitlan, and brings it to my heel. However, my economy is stretched enough as it is, so I have the city disbanded and take the garrisoned troops for my own. 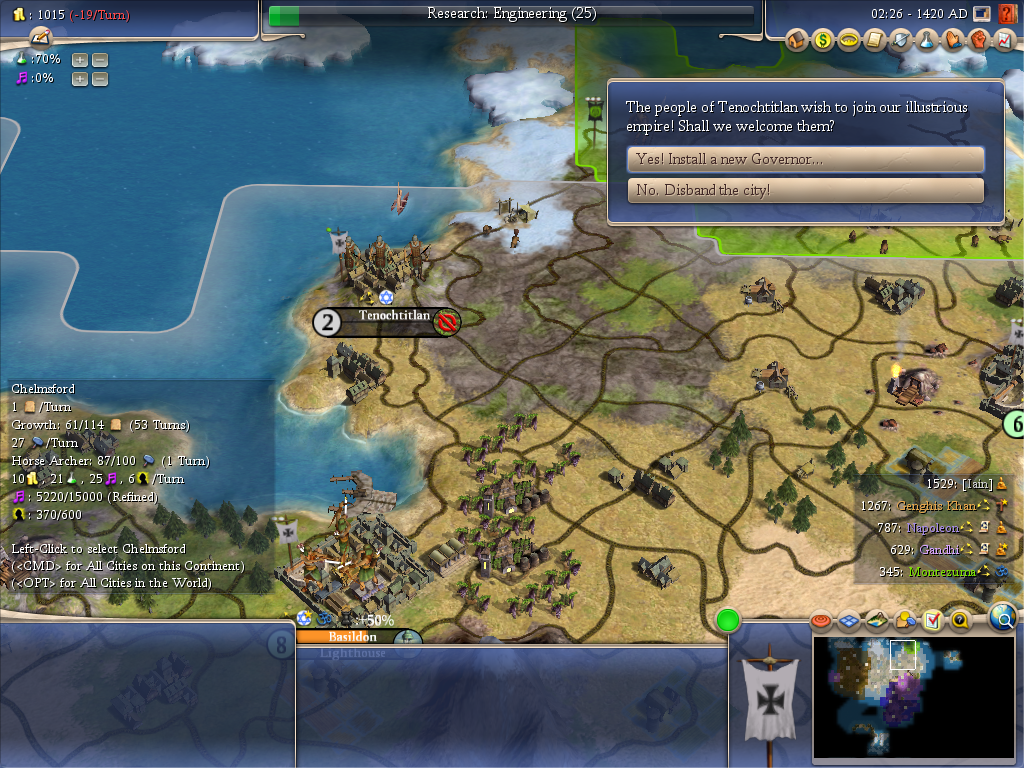 Meanwhile, the N.W.A has discovered a mighty continent over the sea in the east. Its true scale can only be guessed at, but it looks pretty sizeable. I’m going to need to straighten out my economy as soon as possible if I am to colonise it effectively. 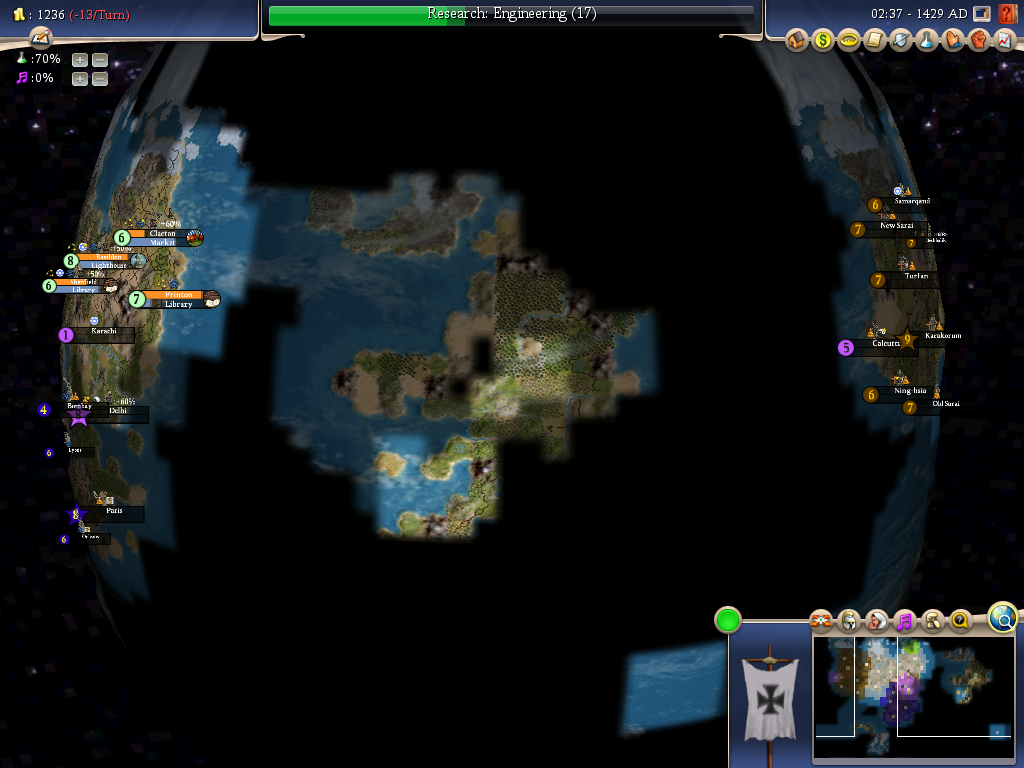 But there are some issues. Barbarians have lived here for so long that they have settled and built their own cities. And they have enormous armies. While exploring the forests of this strange land, Keith Richards is set upon by archers. Three from one side and two more from the nearby city. There is no way that one man can survive an attack like this. 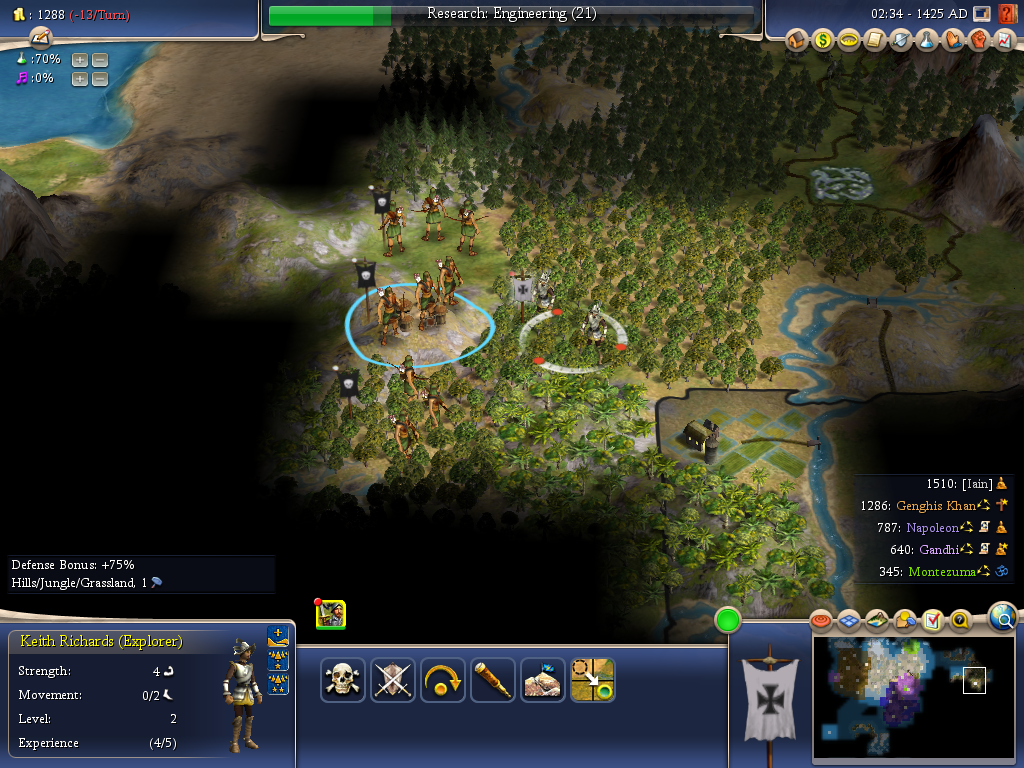 But Keith Richards is apparently invincible. Four archers try and fail to kill him, and not only does he survive, but he’s barely scratched. The fifth unit, up in the hills, chooses to leave Keith to his own devices. A wise move, all things considered. 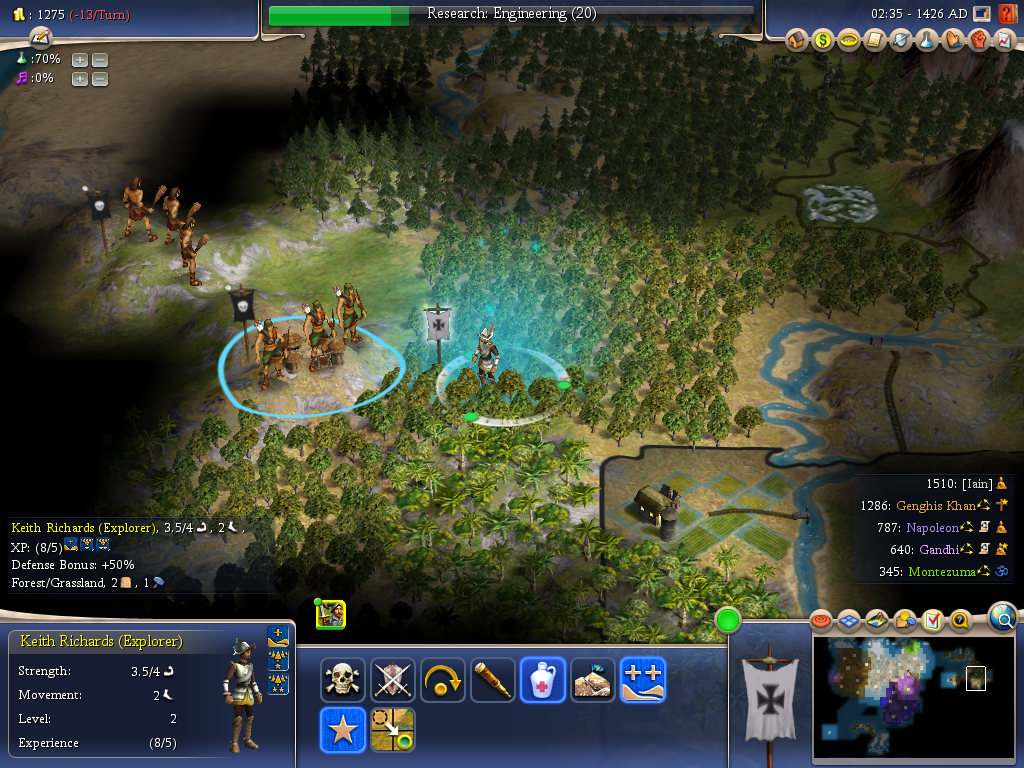 And so we are faced with a choice. Do we embrace the challenges of this new land in the east (by killing all the natives and stealing their land) and expand our empire still further? Do we take a more conservative and moral view to expansion by just claiming that empty land mass to the south, allowing the others to drain their coffers in the New World? Or do we just stay at home, building wonders and banks and things?

I think we all know where this is going, don’t we? 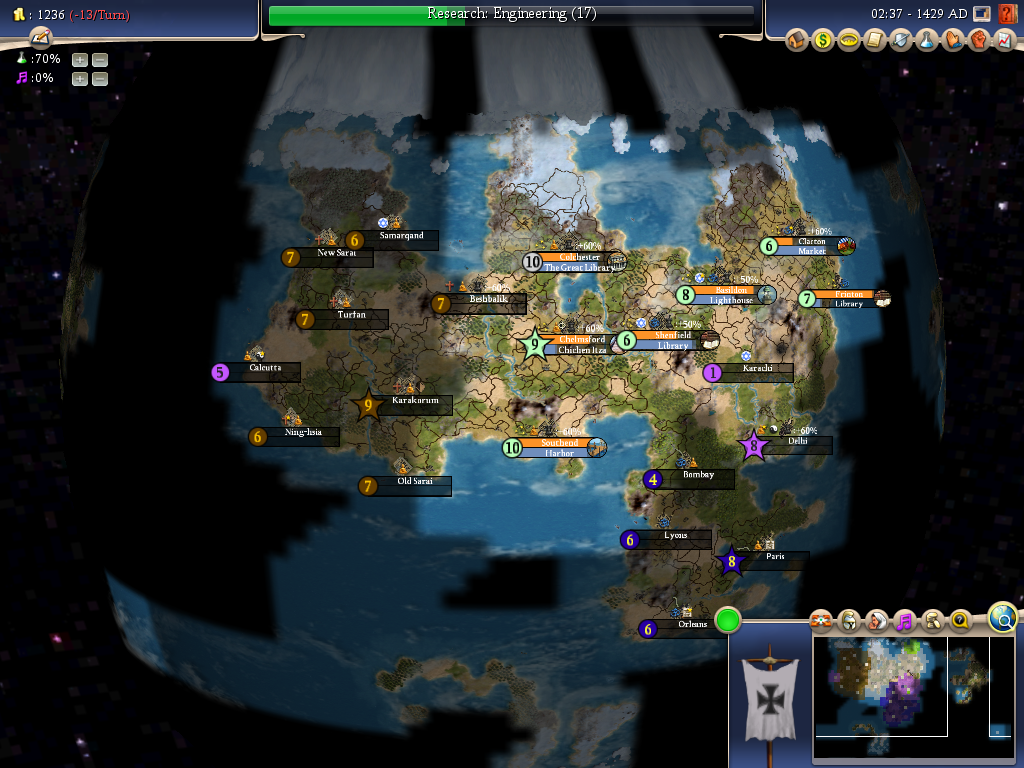