Episode 9 (Hans? Are We The Baddies?)

Montezuma takes the news that a state of war exists between us really well. But don’t feel sorry for him. He attacked me first. We didn’t have to be enemies. It didn’t have to end like this. He killed Oasis, he killed Pulp and, most upsettingly of all, he killed Teenage Fanclub. He deserves this. 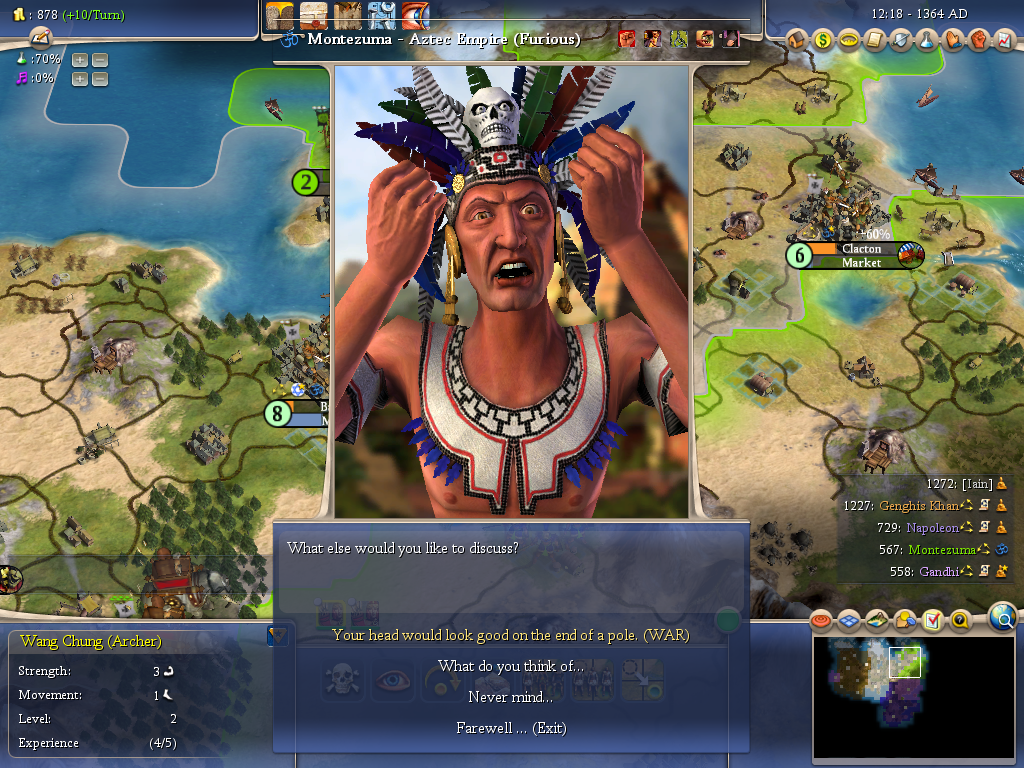 I have two armies at my disposal, but I only send one over the border. They can march on Tlatelolco, destroying mines and quarries as they go. The other force will hold back and wait for the counter-attack. Because there’s nearly always a counter-attack. It’s just that without open borders, I can’t see what troops they have at their disposal or where they are. It doesn’t take long to find them.

One Jaguar (slightly stronger than an axeman) moves in on Basildon, while two more jump off ships at Clacton-on-Sea and set about burning my villages. I regard the peasants as acceptable losses, so this is not a problem. 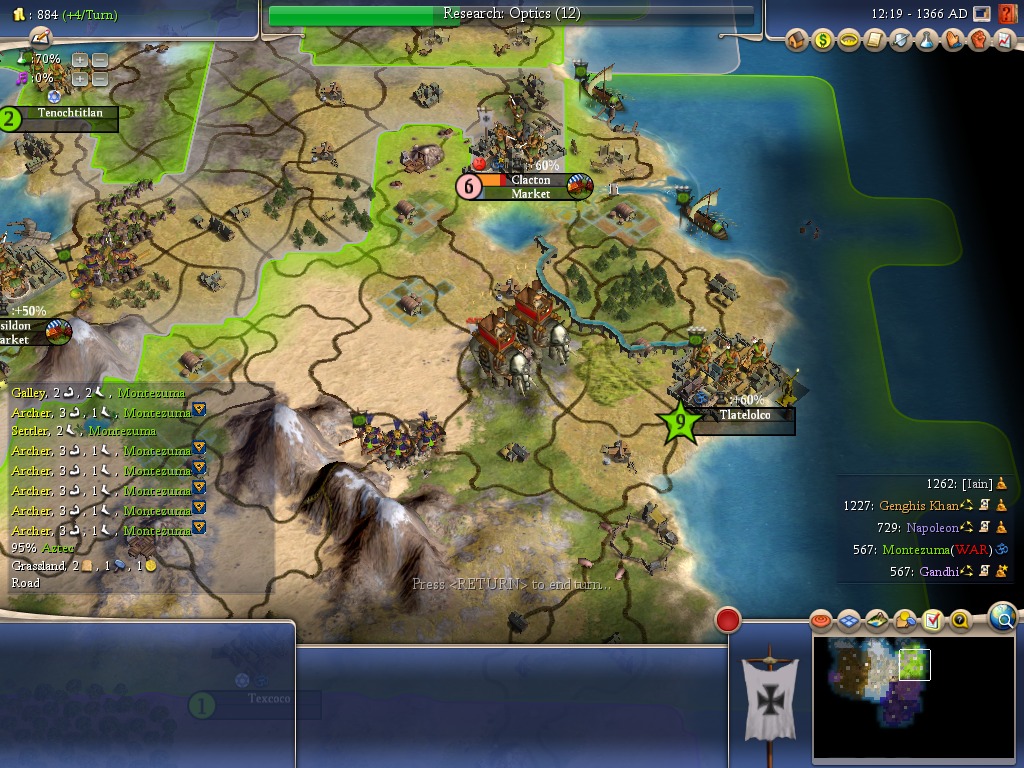 And it’s not long before that reserve unit is sweeping across to deal with them. David Bowie makes short work of the raider outside Basildon. He only has time to pillage one winery before he falls at the lance of the Thin White Duke. 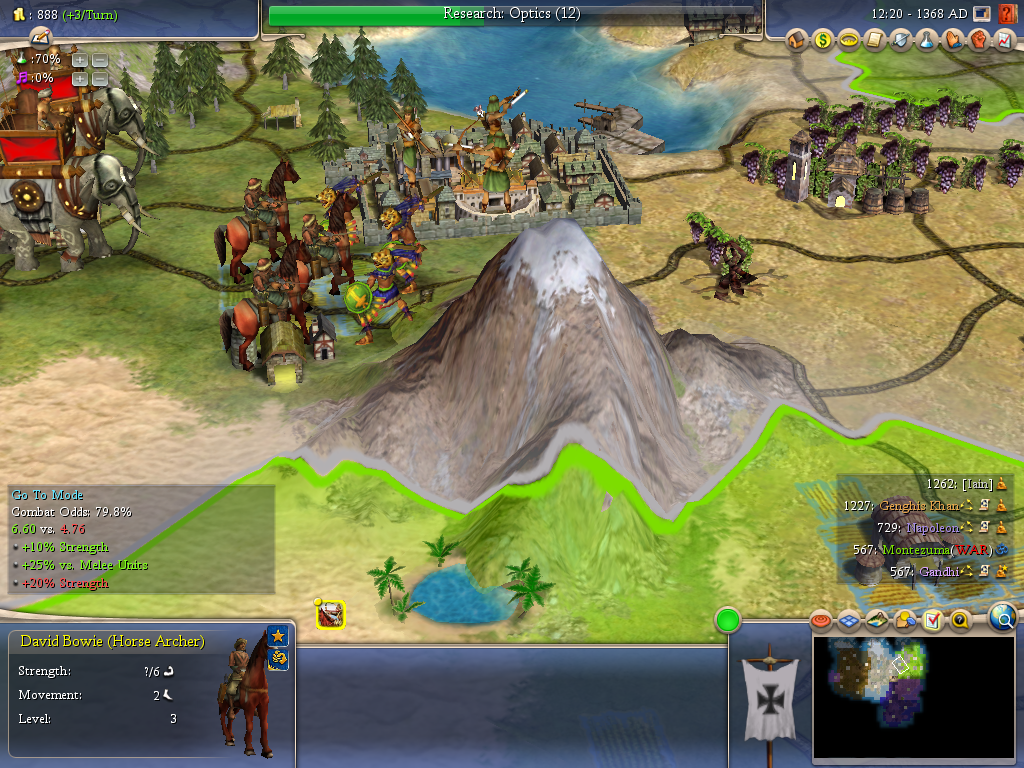 Meanwhile, one of the two Jaguars outside Clacton is killed making an ill-advised assault on the city. Haircut 100 fill them full of arrows from the top of the city walls. If that’s the best that Montezuma has got, he’s in a lot of trouble. 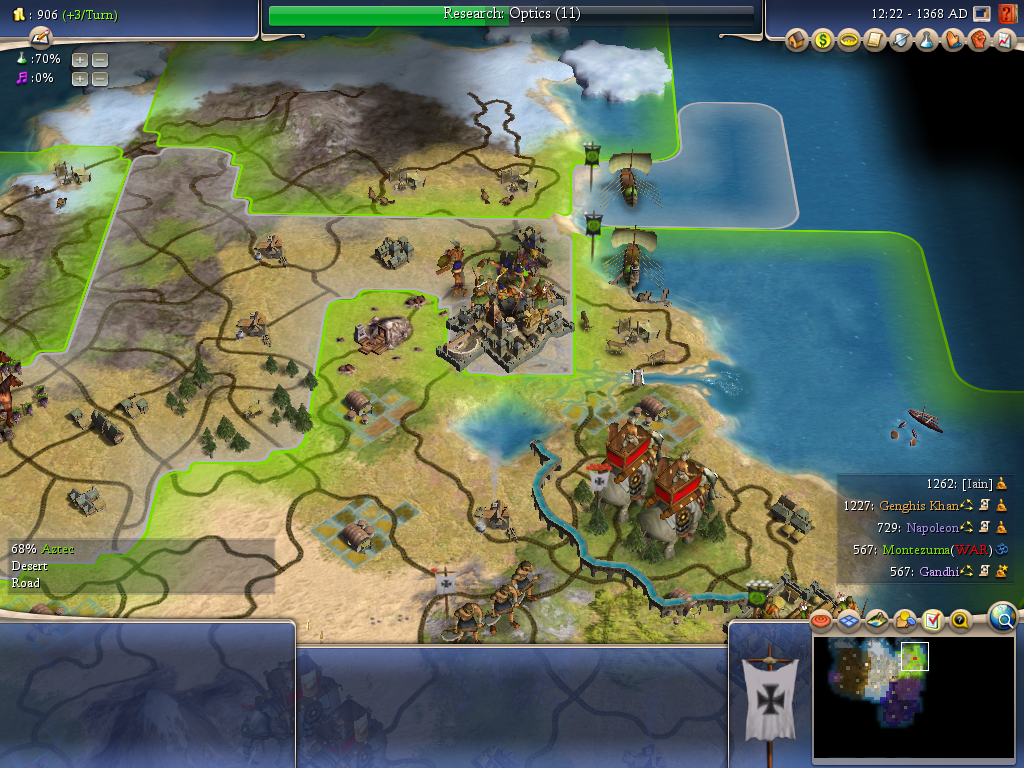 The remaining Jaguar pillages one of my towns and is just about to raze another to the ground when he hears the frenzied galloping of Prince, clattering over the plains with vengeance burning in his eyes. Prince does not condone the slaughter of civilians. That sort of thing gets right up Prince’s nose. 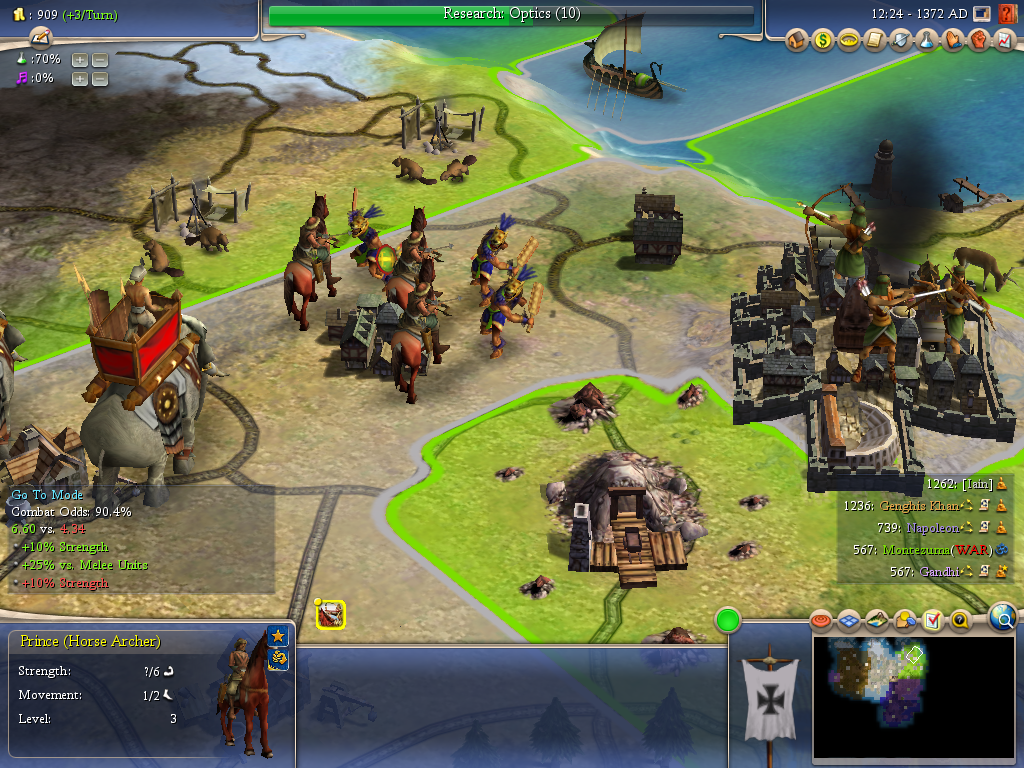 As our own borders are swept clear of Aztec menace, our task forces arrives at the walls of Tlatelolco.

The Aztecs have been busy. They’ve built a colossus in the bay. No wonder that culture was spilling over Clacton. Any more wonders like that and we might have lost the city to them. It turns out that I was right to declare war on such a flimsy pretext. Extraordinary. This is exactly how Tony Blair would have felt if weapons of mass destruction had ever turned up. A mixture of moral vindication and a sneaking suspicion that now would be a very good time to buy a lottery ticket. 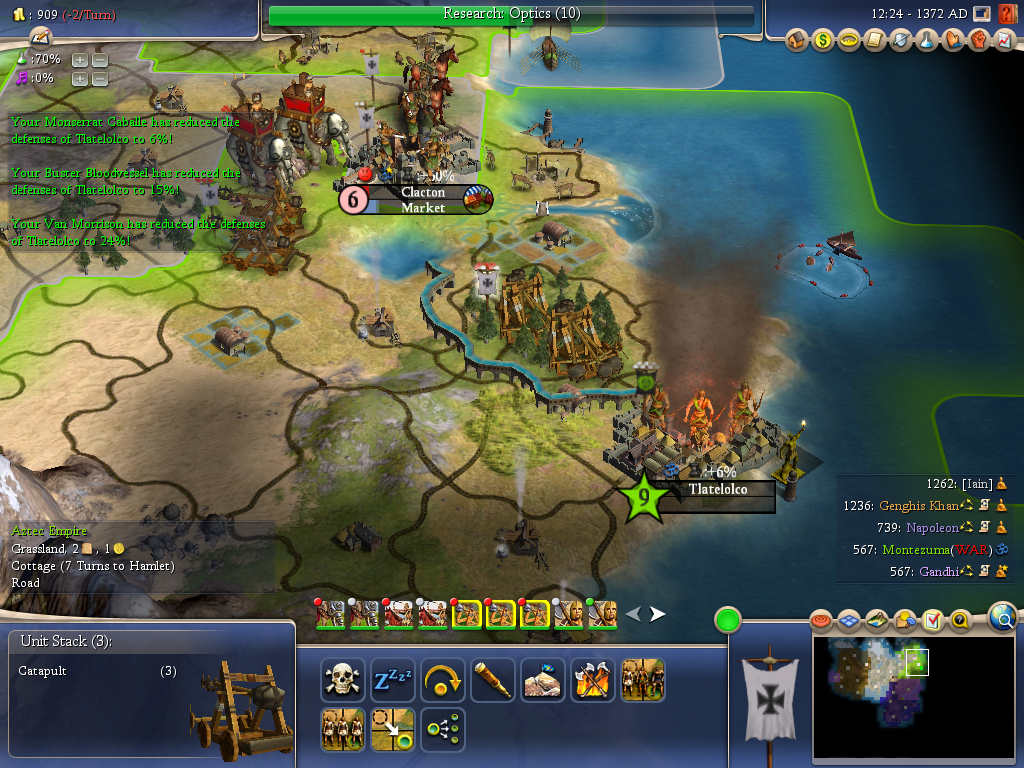 The catapults pile in and reduce the walls of the city. Then the elephants put down their heads and charge. Henry Rollins leads the vanguard on account of him being absolutely fucking terrifying.

Unsurprisingly, the Aztecs have no response. We take the city without losing a single unit. 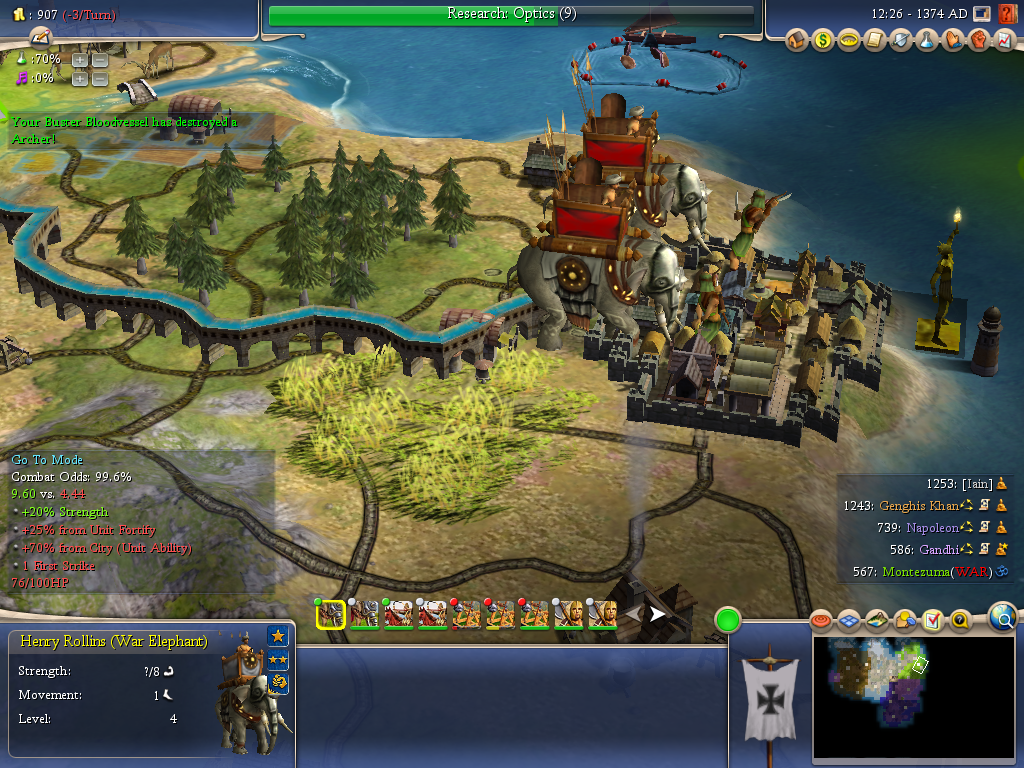 Behold, the Colossus of Frinton! A new wonder is secured for our empire, along with the space we needed for Clacton to prosper. There’s just the small matter of that patch of green to the south. We can’t have that, we might find ourselves in the same situation 200 years down the line. 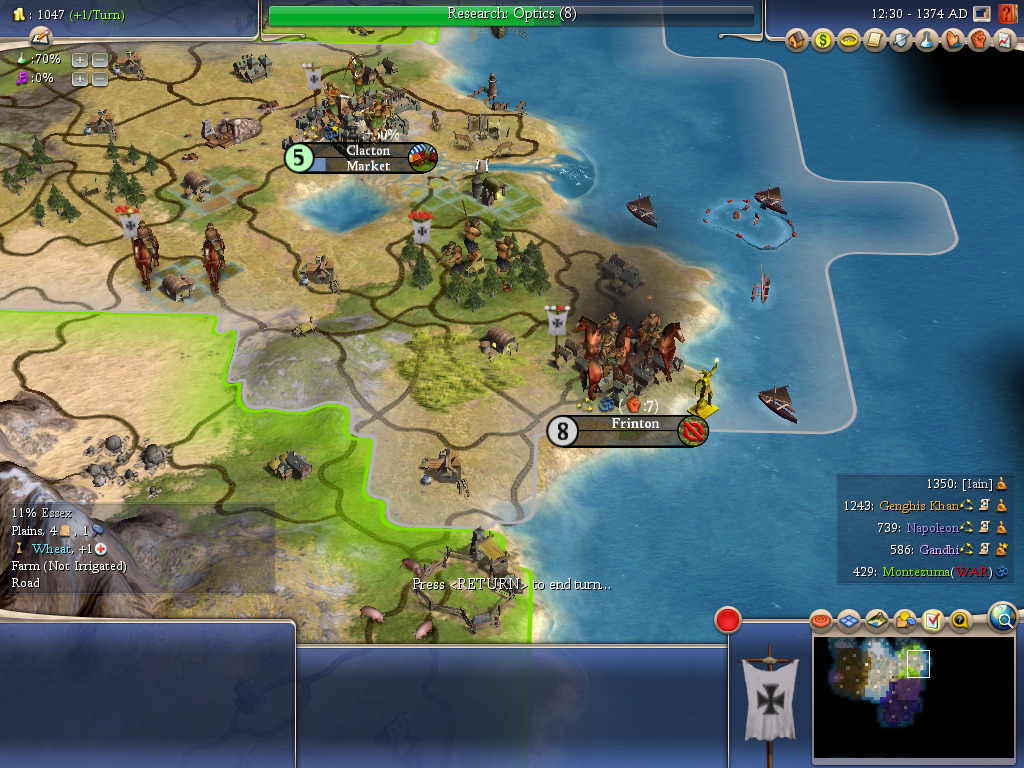 Annoyingly, the tiny city of Texcoco puts up far more of a fight than Tlatelolco. This is partly because I use the other task force, made up of weaker units, in an effort to harden them for future combat, rather than the double-hard bastards brushing themselves down in Frinton.

My strategy is not, it must be said, an unqualified success. 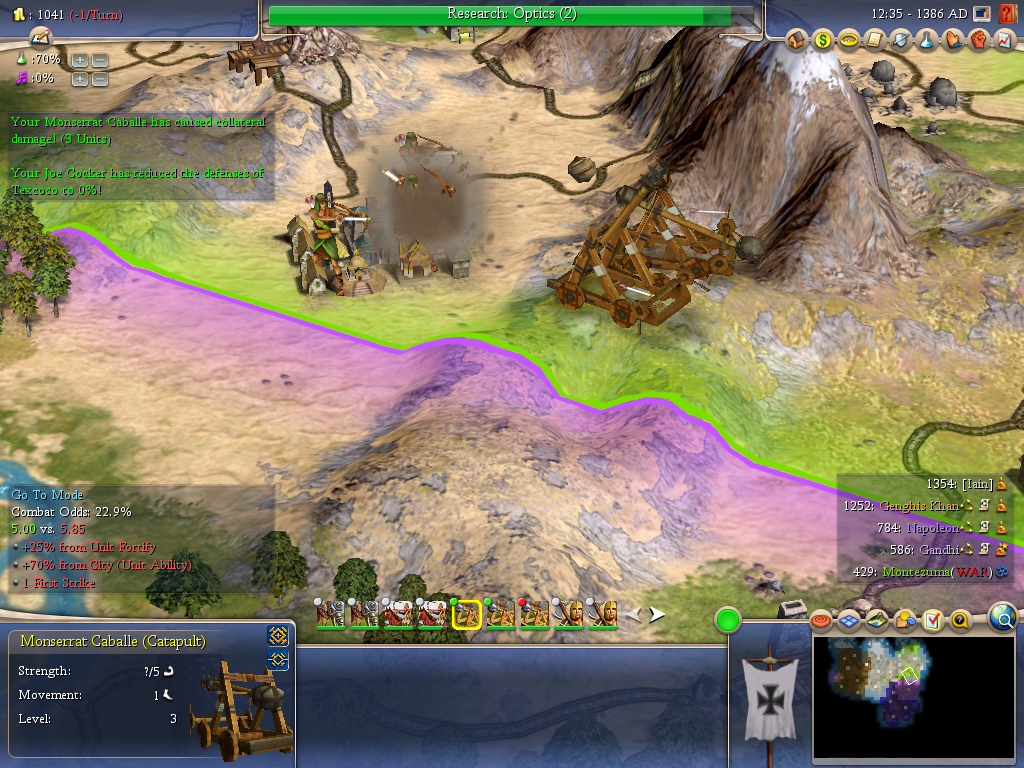 First we lose Monserrat Caballe, then we lose Blur. That’s rather more Essex blood than I wanted to shed. Explaining this to their families is going to be all the more difficult when I tell them that Texcoco was so small, it collapsed into ruins. We didn’t actually gain a new city from the adventure, just a bit more territory. You know what? I might delegate that task to someone else. I’m a very busy despot. 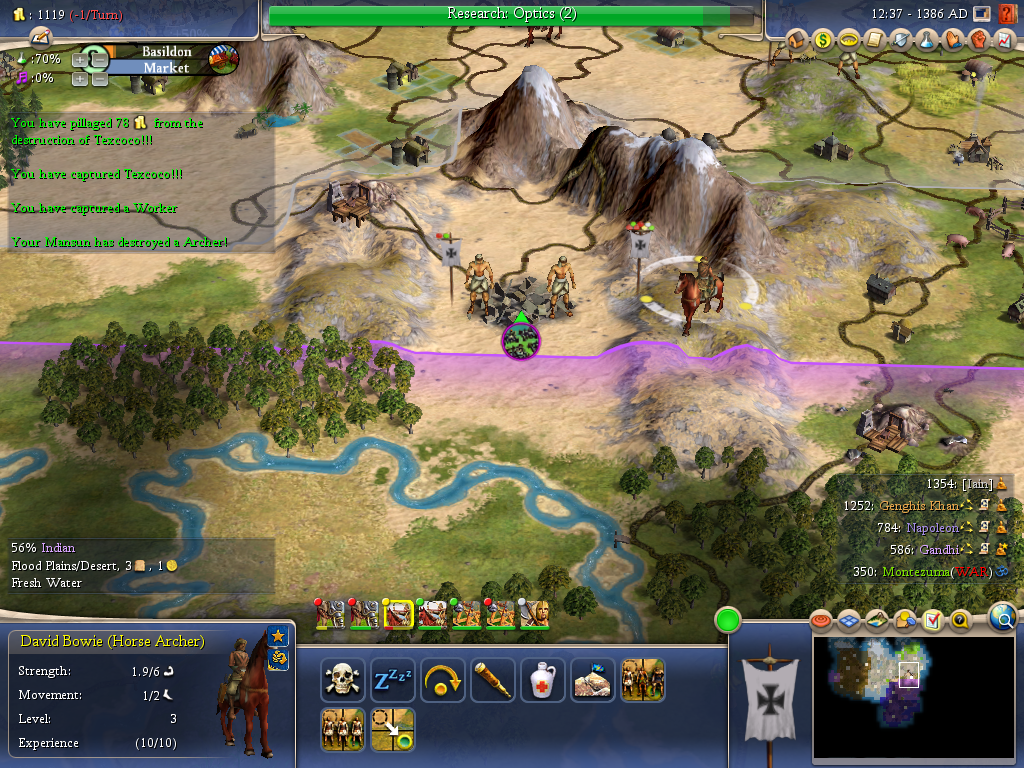 Eager to return to my domestic policy, I thrash out a peace deal with Montezuma (along with some reparations for his part in encouraging this needless conflict) and try to move on. But someone else wants to speak to me. It’s Genghis Khan. Apparently he and Montezuma were closer than I thought. And he’s breaking off diplomatic relations with me. That’s not good news. That’s not good news at all. 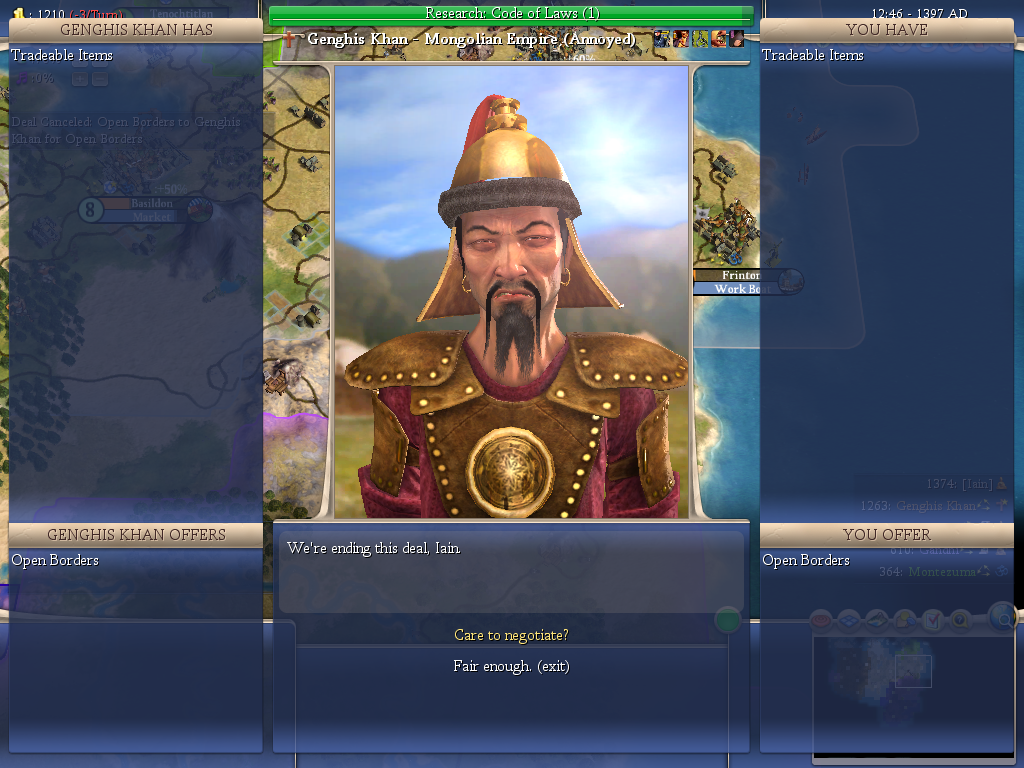 With the Aztecs broken and the French and the Indians weakened, we no longer fear a credible military threat in the east. But in producing that outcome, we have created one in the west. A very credible one. The bleeding Mongols. The next 200 years could be very interesting… 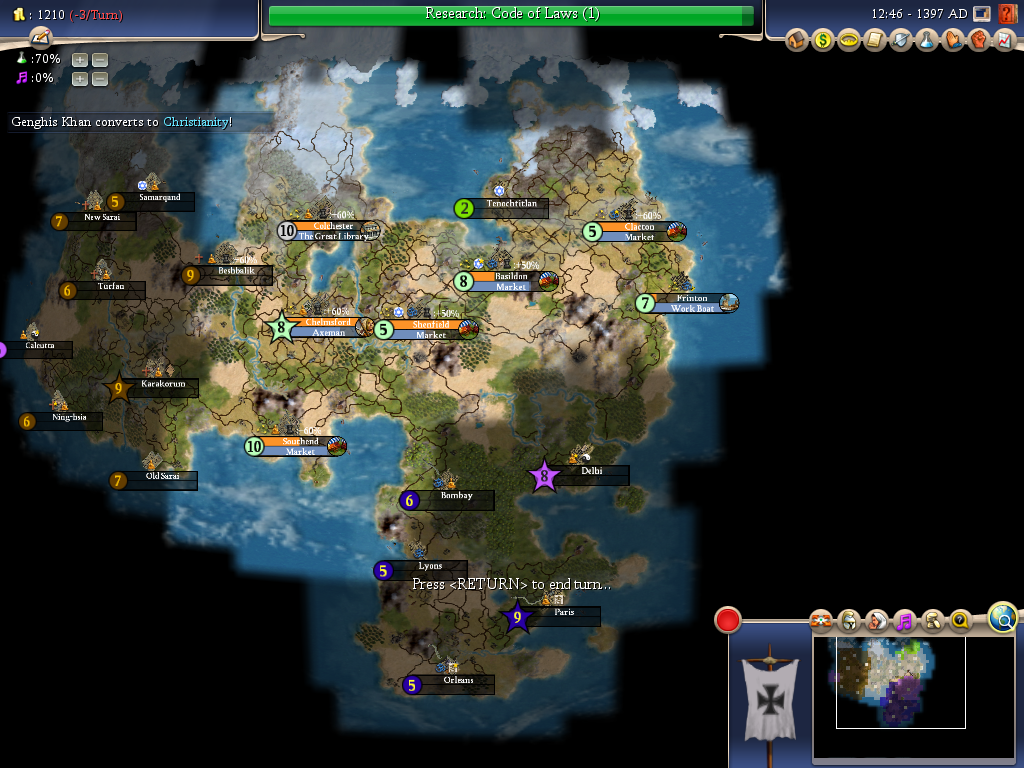