Peace is prosperous, peace is good, but by thunder, peace is dull. Across the empire of Essex, my busy little workers drag the countryside kicking and screaming into the 13th century, building farms and mines and villages and all sorts of other lovely things that will help us prosper for generations. I’ve got roads from one side of the territory to the other. I’ve got temples and monasteries, aqueducts and granaries, every city is encircled by strong walls and teeming with battle-hardened warriors. But heavens, it’s boring.

It is for this reason that I’m actually quite pleased when my scout, Lonnie Donegan, is murdered in the snowy peaks north of Colchester by barbarian axemen. It gives me an excuse to deploy two horsemen, David Bowie and Prince, for a bit of venomous retribution. Poor old Lonnie, though. 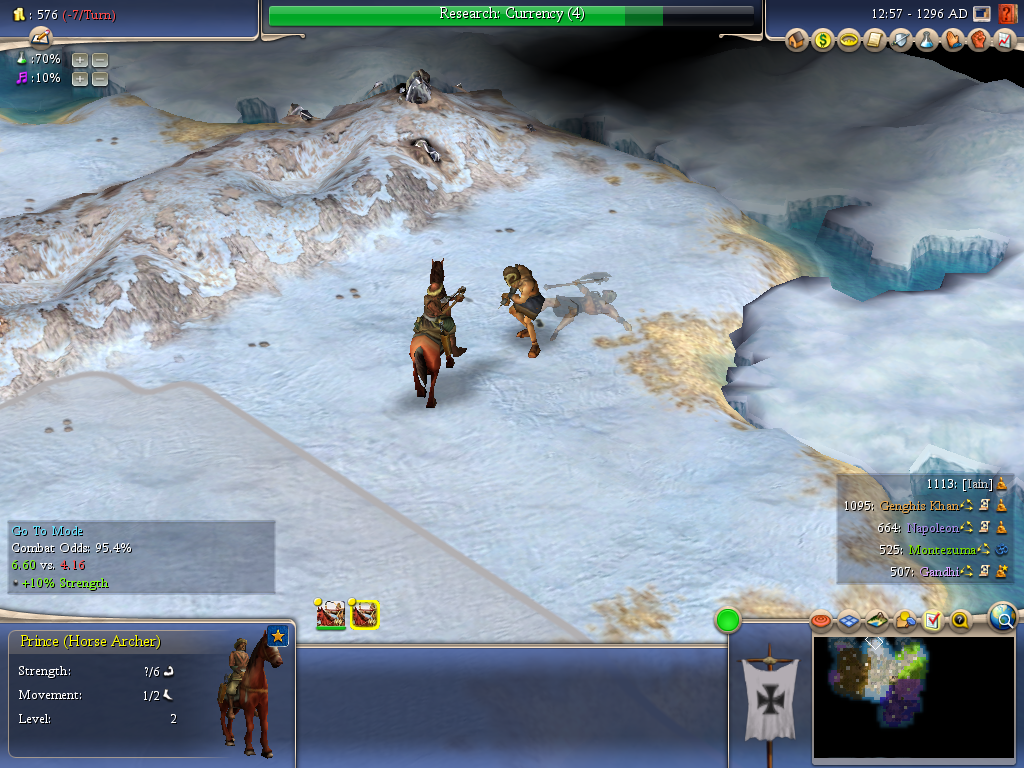 I’ve taken this long outbreak of peace and quiet as an opportunity to strengthen and reorganise my troops. This is my East Force, stationed south of Shenfield, but covering the mountain pass to guard against a surprise French attack. You know…just in case. East Force is made up of three catapults, two war elephants, two horse archers and three axemen. You do not want to spill their pint. 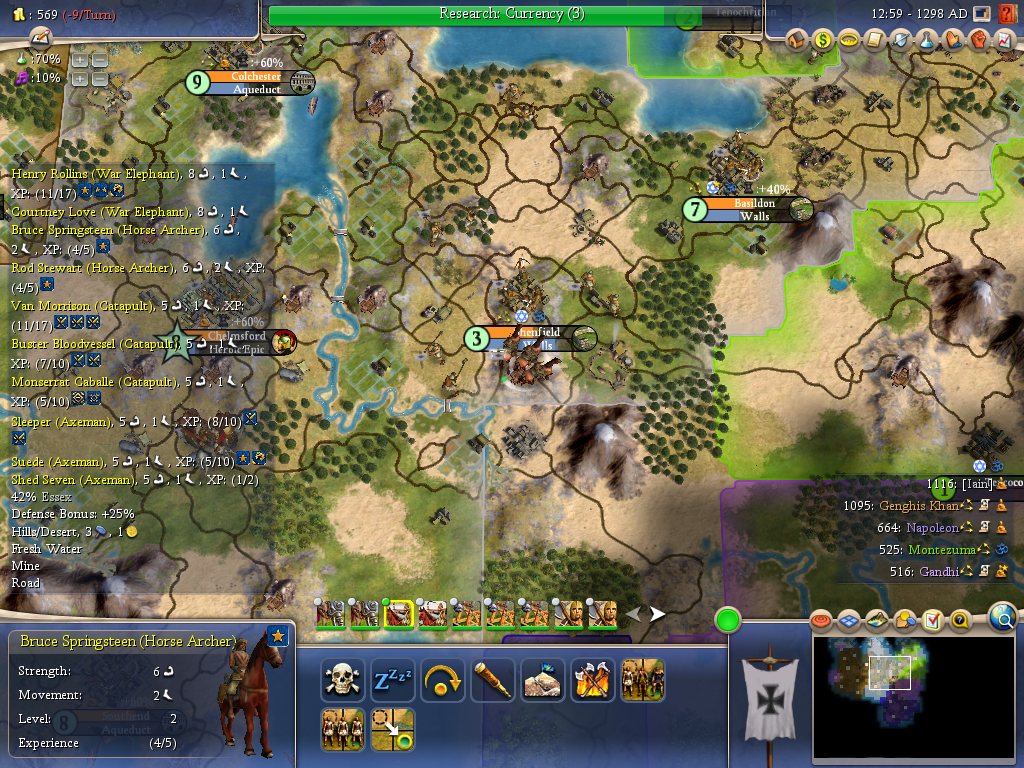 Elsewhere, I’m delighted to report the birth of Zoraster in the seaside town of Clacton. Zoraster is a great prophet and brings a number of potential benefits. I could station him in a city for a bit of money, I could use him to invent something in one turn, or I can use him to build a holy building. Now holy buildings are very useful indeed. Not only do they generate culture, but every city that follows the religion in question earns you money. 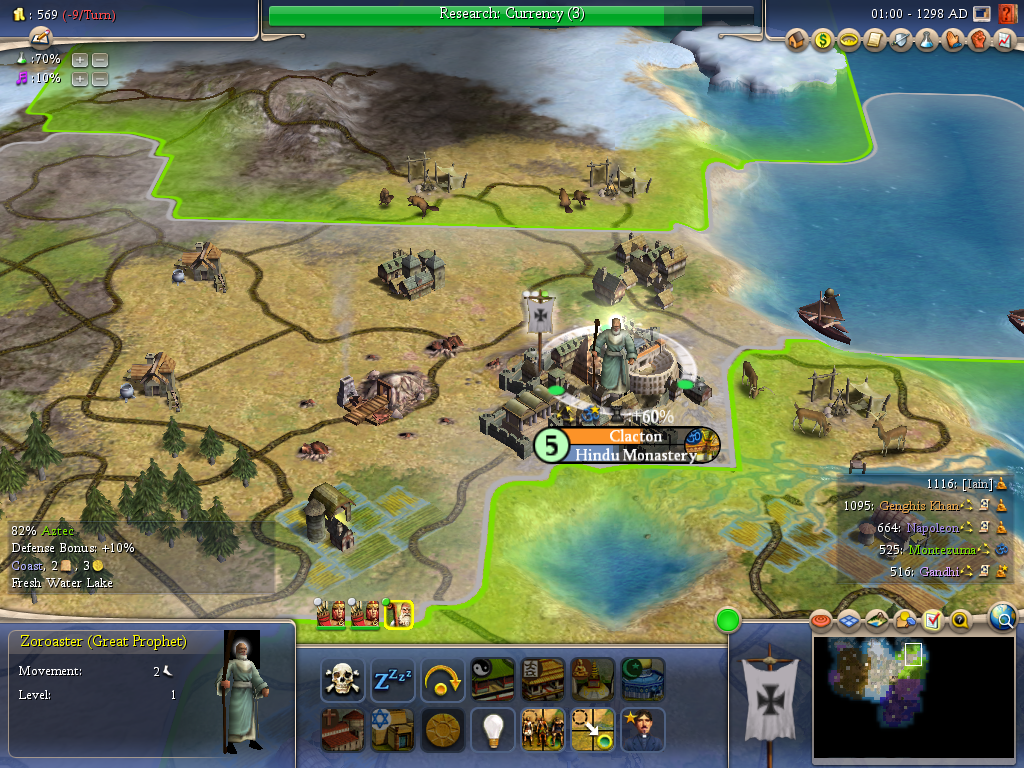 And so Zoroaster travels to Basildon, where Judaism was first brought into being by the Aztecs. He quickly builds the Temple of Solomon and, all of a sudden, we’ve cleared the national deficit. Good work, Zoroaster. 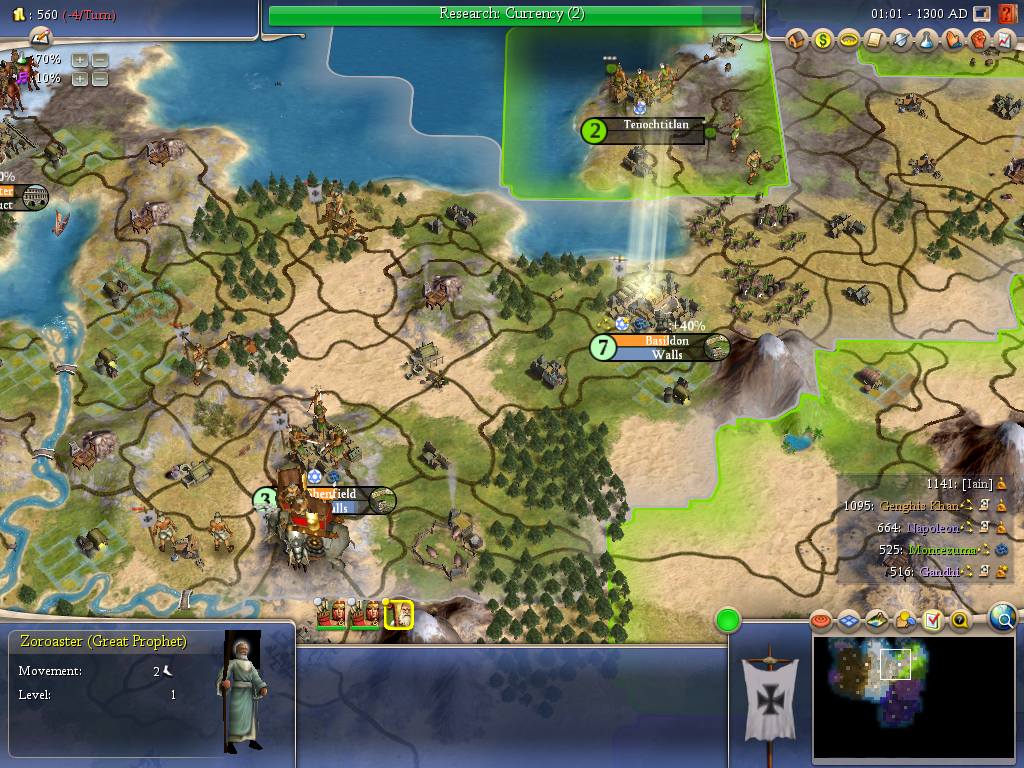 A few years later, West Force is deployed to the south of Chelmsford. In size and make-up, it’s exactly the same as East Force, but with less experienced troops. I don’t think that an attack is likely from either flank, but let’s face it, if anyone’s going to try to catch me out, it’ll be the bloody Aztecs. 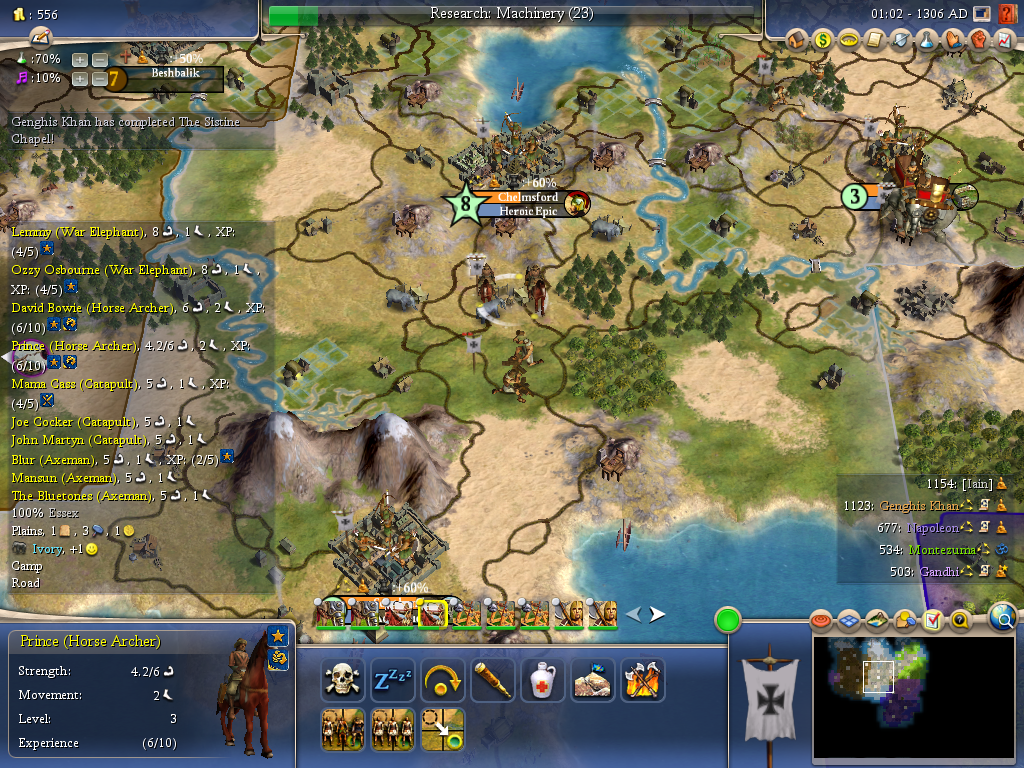 But these are good times. Genghis Khan’s completion of the Sistine Chapel has just pushed him out in front on points, but when it comes to size, there’s nothing bigger than the Empire of Essex. 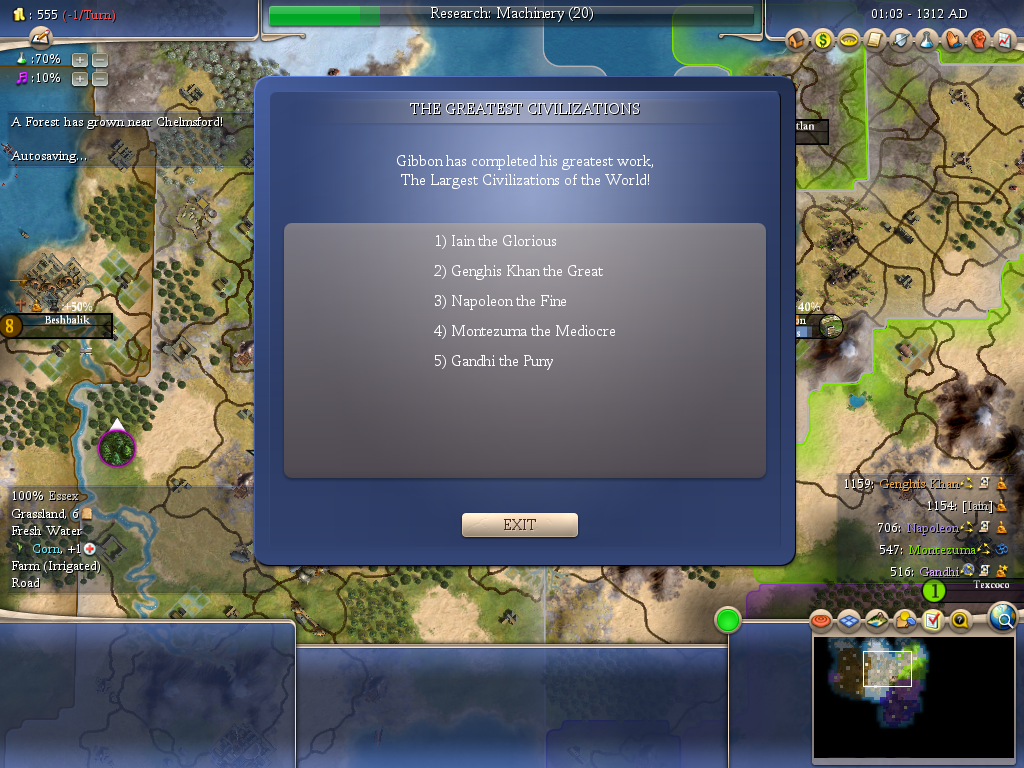 But there are no more barbarians out there to keep things interesting and so, like The Phantom Menace, we find ourselves focusing far more on negotiating trade deals than running around fighting. Sigh. That’s what we are now. We’re the fucking Phantom Menace. A bit of hope, a bit of promise and then an interminable streak of characterless beige across the big screen, a great big toy advert conceived by a man whose early cinematic skills had clearly been the result of a Faustian pact that expired at some point in 1983.

Not on my watch. 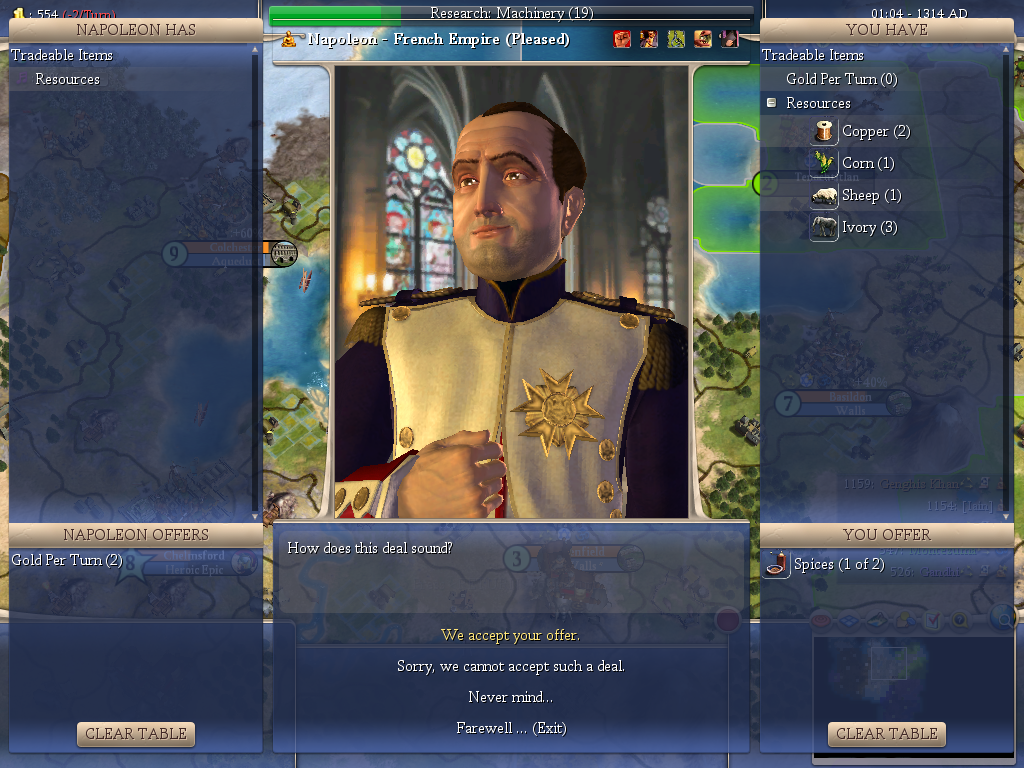 Look over there. The Aztec empire has been stretching out in the east. I don’t know what’s going on there, our closed borders mean that I can’t even see the city that is somehow generating cultural waves powerful enough to snatch some of Clacton’s territory. But I will not tolerate these incursions. Yes, we took Clacton by force in a brutal war that killed thousands and left Aztec refugees sprinting for the snowy wastes in the north, but this is a question of sovereignty. I rather liked that deer farm, or whatever the fuck it is.

We must make a stand. If not us, then who? And if not now, then when? 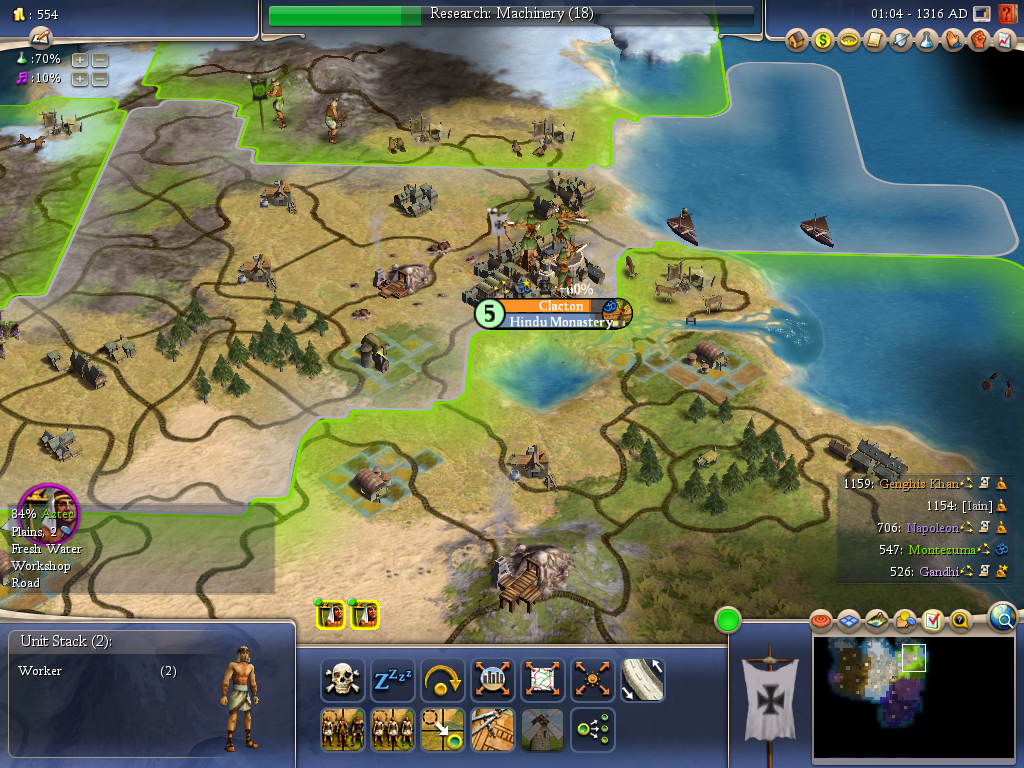 I have two vast armies at my disposal. I have cities so well defended that they could easily withstand any potential counter-attack. Enough of this passionless drive for corporate growth. Enough of the marketplace construction. Tomorrow, we ride to war.

And besides, they started it when they killed Oasis in 190AD… 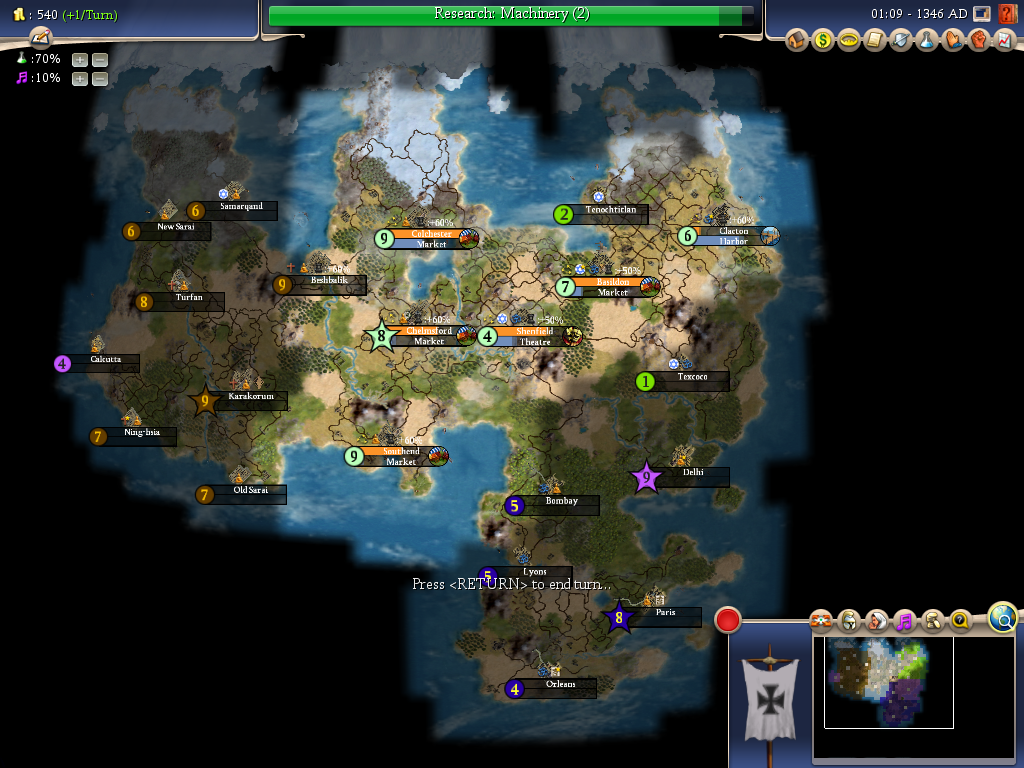