Episode 1 (Birth of a Nation); Episode 2 (The Race for Copper); Episode 3 (Love Me Tender, Love Me Dead); Episode 4 (The Hills Are Alive With The Sound of Screaming); Episode 5 (He Would Do Anything For Chelmsford. Including *That*); Episode 6 (On My Signal, Unleash Montserrat Caballe); Episode 7 (War Is Over. If You Want It…); Episode 8 (Behold, The Hanging Gardens of Chelmsford); Episode 9 (Hans? Are We The Baddies?); Episode 10 (The Essex Superstate Takes Shape); Episode 11 (You Cannot Kill Keith Richards); Episode 12 (I Still See Gandhi’s Face At Night When I Close My Eyes)

The new world is ferocious. For some reason, the natives are aggressively opposed to my plans to strip their land of its resources and funnel the profits back to my capital city across the ocean. I’ve tried explaining how much they’ll benefit when we get around to inventing railways, but they’re not having any of it. You think they’d be grateful for the strong hand of a benevolent colonial emperor, but no. It’s just one guerrilla attack after another. They’re on me within months of the establishment of the Margate settlement. Fortunately, I sent Lemmy over to keep the peace. 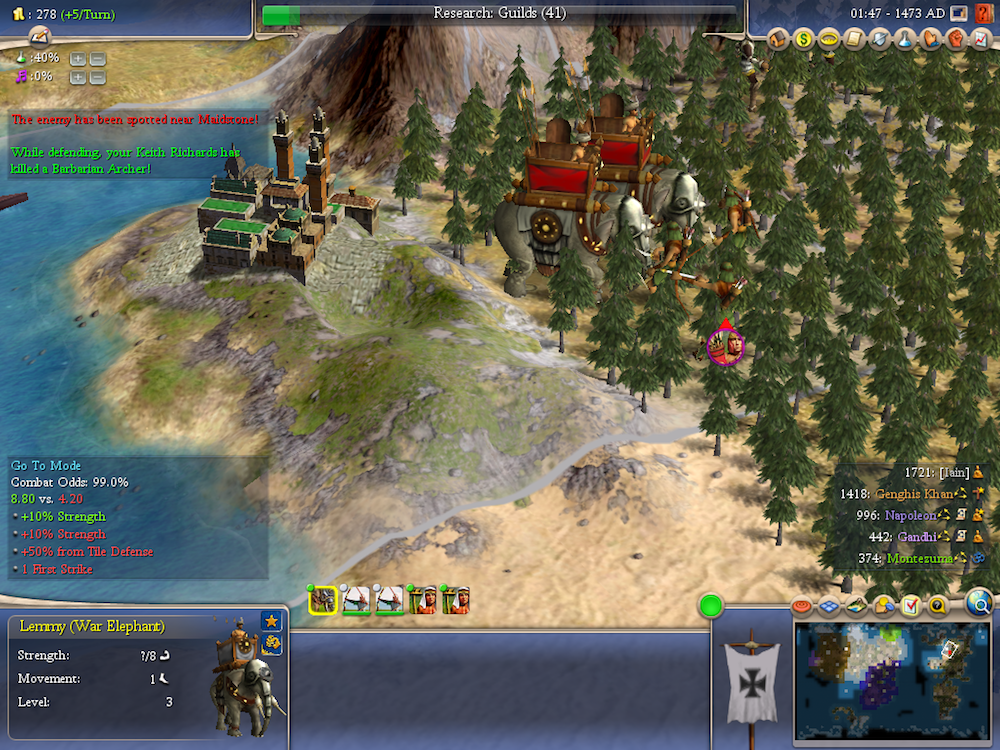 With our new cities under constant attack, I set up a perimeter in the forests. A team of indentured workers, hastily transported across the sea in my galleons, is set to work building roads to link our fortifications. Lemmy is deployed in a free role to reinforce the line where necessary. Keith Richards is directly to the east of Maidstone with Mansun. A couple of clicks to the south, you’ll find Brian Wilson and his longbow men. Suede are in the wooded hills, almost at a right angle between the two cities and then there’s Henry Rollins to sweep up anyone attempting to sneak through to Margate. Under near constant attack, the line holds comfortably. 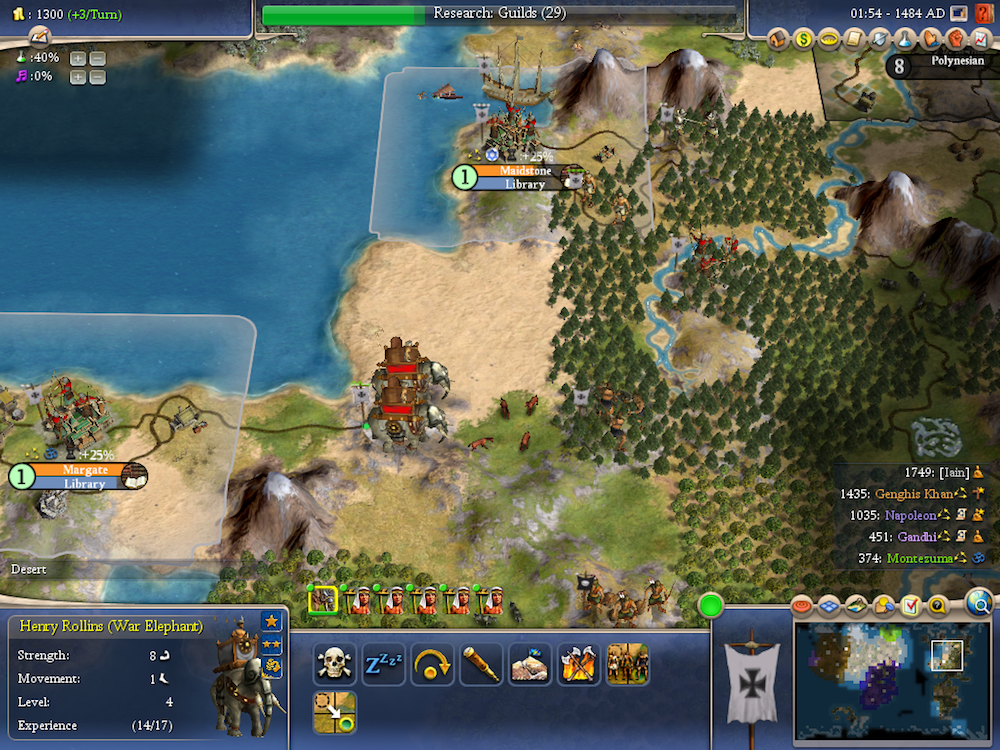 If it wasn’t bad enough that I allowed the Indian cities to fall by failing to buy off Napoleon, I’ve now had to break off diplomatic relations too. I feel bad about it, but there’s nothing I can do. Essex is flanked by the Mongols, who hate me for crushing the Aztecs, and the French, who like me at the moment but can’t be trusted for a second. My survival depends on the delicate balance of this three-way relationship.

If the Mongols and the French team up against me, I’m in a lot of trouble. I have two armies in position by the Mongol border and one by the French, but they won’t hold out for long against a prolonged, two front incursion. I have to keep the French onside. And that means that I can’t see Gandhi anymore. 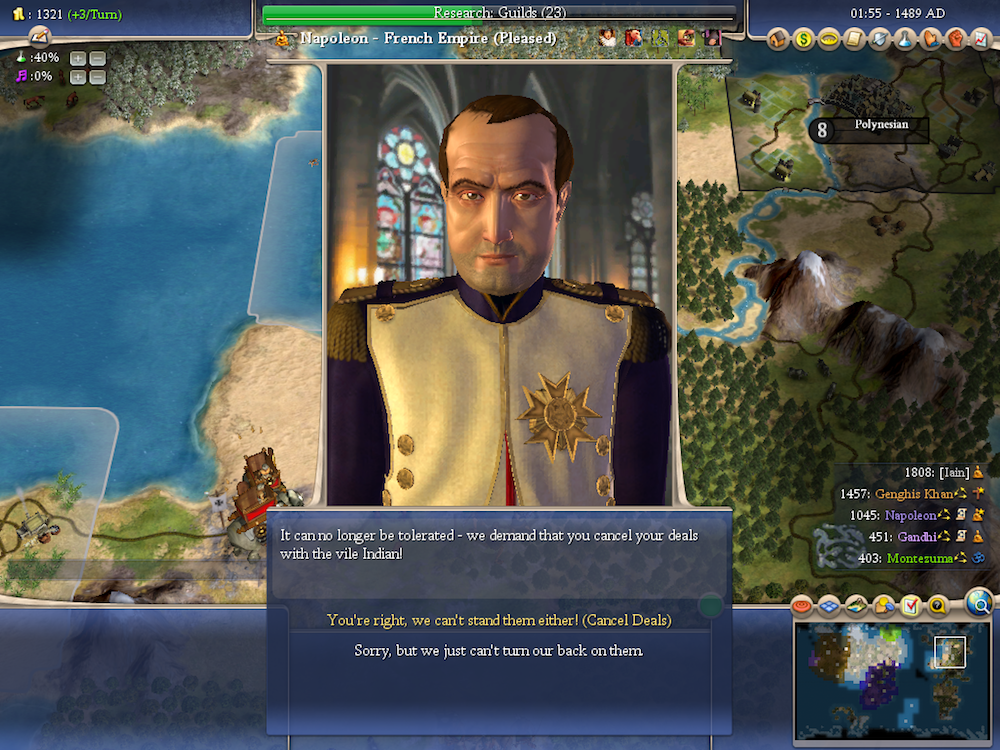 But while I feel a bit of a stinker for that, at least there’s some news from back home to cheer me up. Clacton has certainly put itself on the map with the completion of the Notre Dame cathedral. Our humble seaside resort really is the talk of the empire. 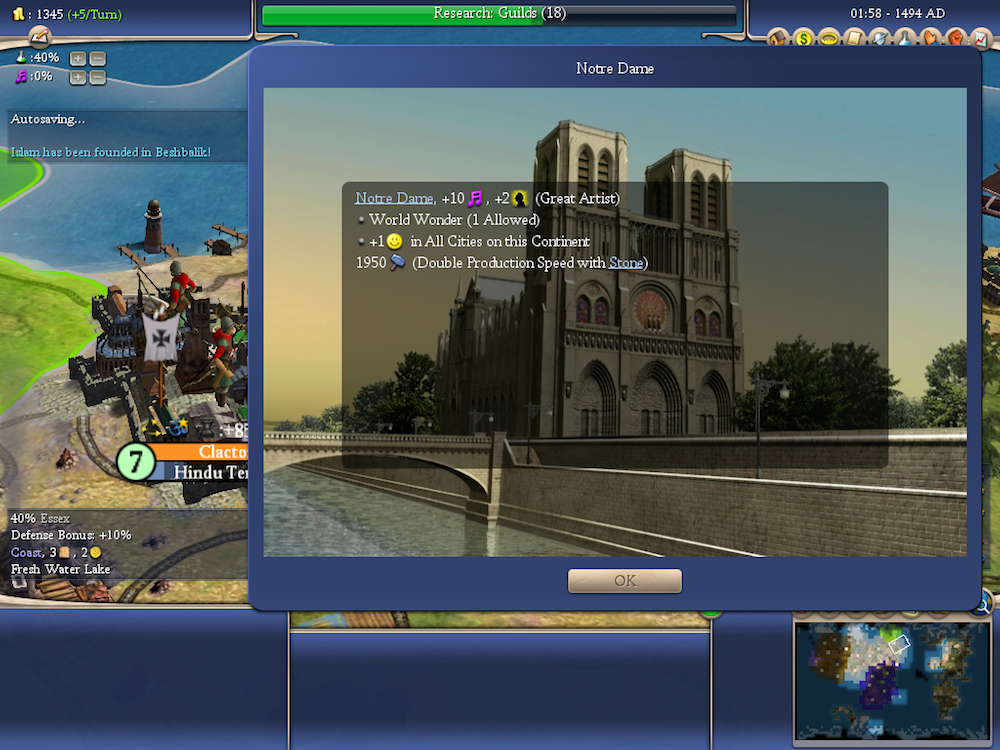 Unfortunately as we head into the 16th century, we find ourselves in the grip of an economic crisis. You see, you can’t just build lots of settlers and tear off across the planet expanding your empire as you go. Each new city brings a slightly higher maintenance cost, presumably the wages of legions of civil servants holding everything together. There’s also a penalty for distance, which means that Maidstone and Margate are costing me a fortune.

They’ll be worth it in the end, of course. I can build courthouses everywhere to reduce costs and we’re close to the development of guilds, which will allow us to build grocers and then banks. But for now, we’re so stretched that I have to lower the science budget to practically nothing. Our imperial nerds are fuming. 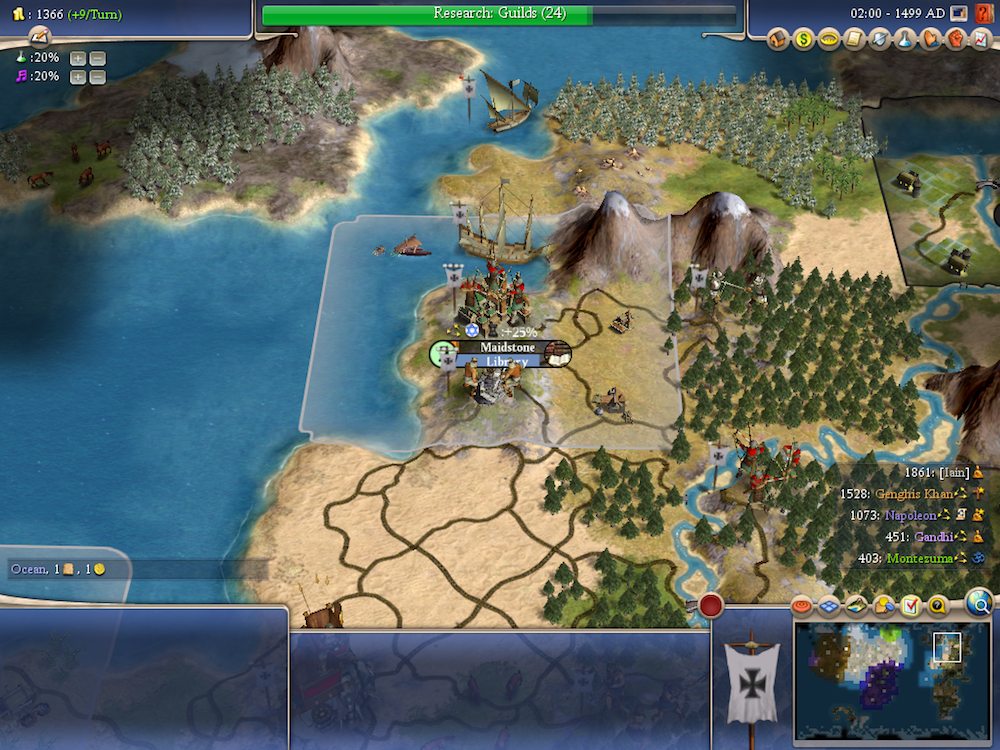 Beguiled by the nearby cities of Shenfield and Basildon, the people of Karachi yearn to be a part of Essex. The French have to put a rebellion down in 1503. 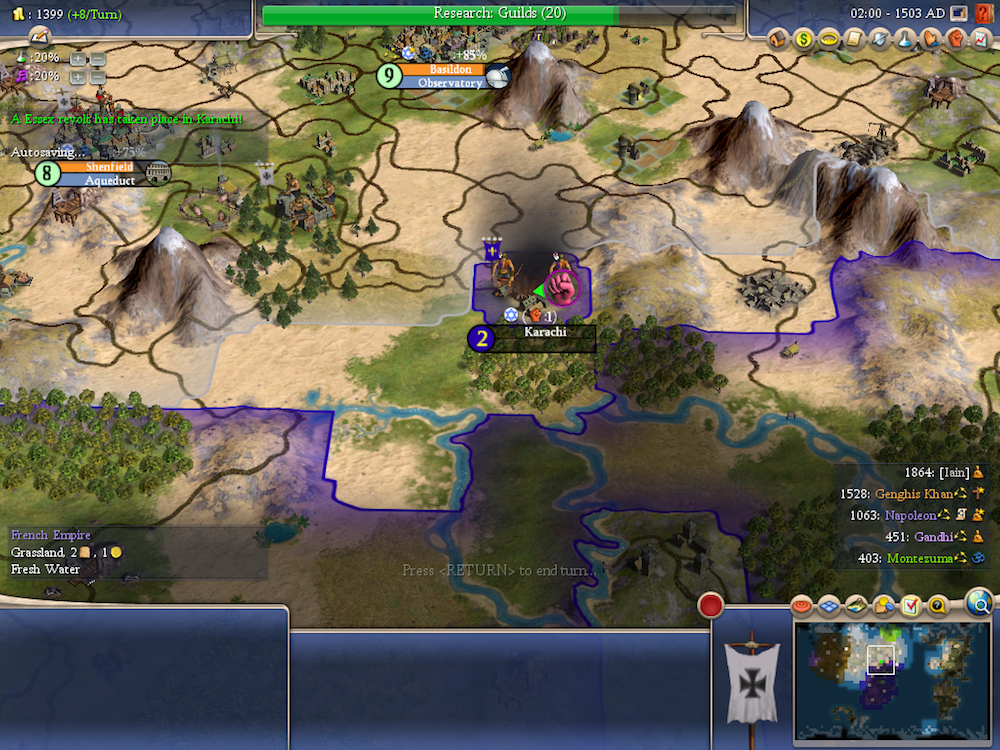 But there’s nothing they can do nine years later when the people rise up and boot them out of the city. Karachi wants to be a part of Essex. Do I shelter them under my wing? I can’t really afford it, but if I don’t take it for myself then the French will just settle on the riverbanks to the south and that will compromise my border. I’ll have to find the money somewhere. 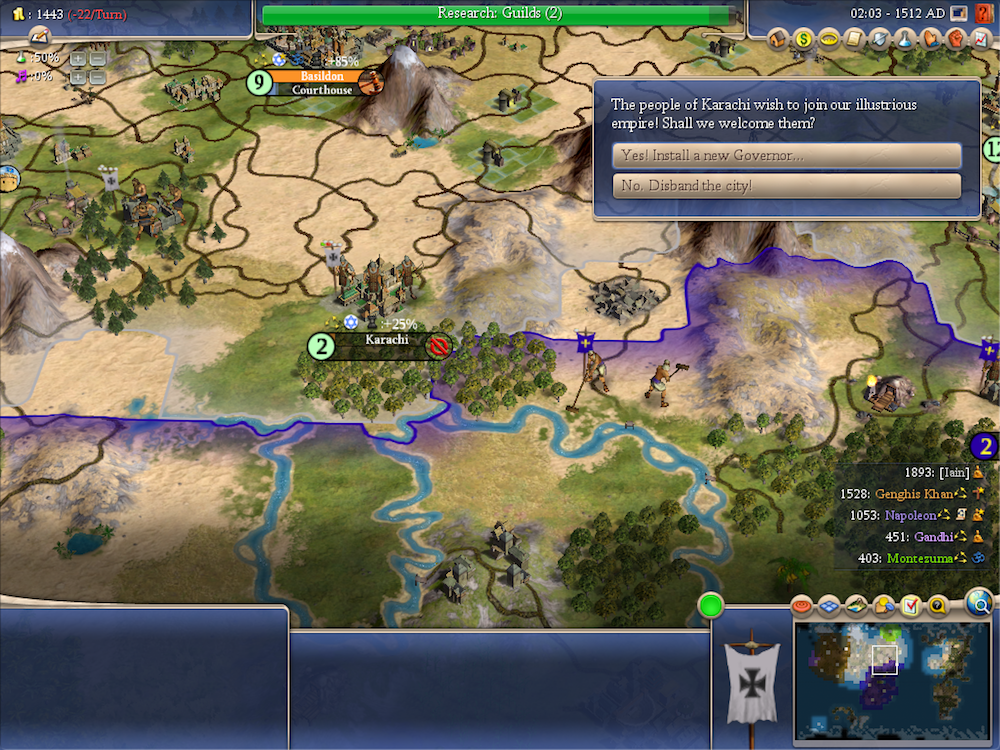 For now, however, there is peace in the old world. The Mongols seem quietly content in their own lands and the French appear to be quietly consolidating their conquests, working the farms outside of Delhi and Bombay. Neither of them have galleons yet, but it won’t be long before they figure them out.

I can see Mongol and French caravels skimming across the seas with increasing frequency. They know the new world is out there, they can see me colonising it. But for now, they can’t do anything about it. As I rebuild my economy with grocers, banks and courthouses, I have to ask myself a question: How much do I dare to expand in the meantime? 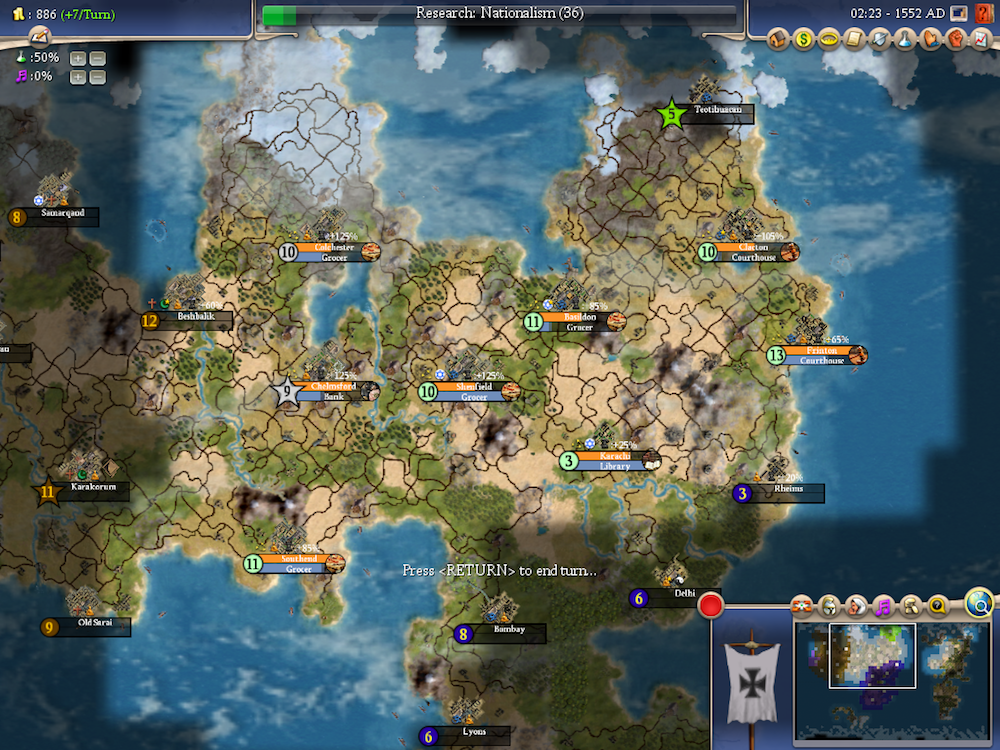 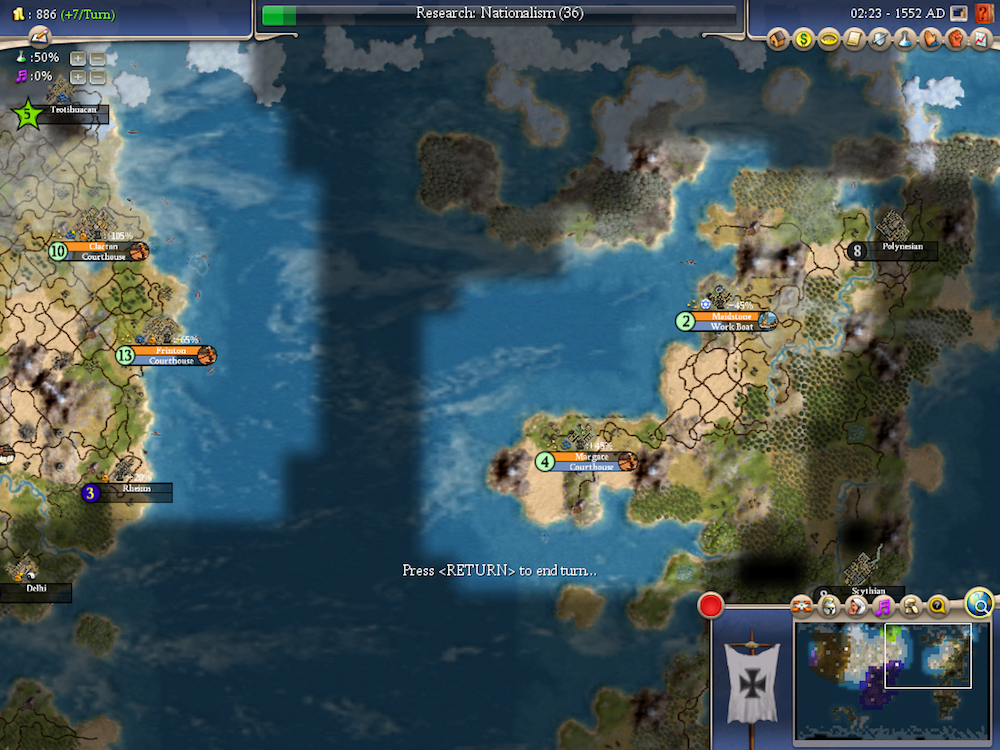