Episode 1 (Birth of a Nation); Episode 2 (The Race for Copper); Episode 3 (Love Me Tender, Love Me Dead); Episode 4 (The Hills Are Alive With The Sound of Screaming); Episode 5 (He Would Do Anything For Chelmsford. Including *That*); Episode 6 (On My Signal, Unleash Montserrat Caballe); Episode 7 (War Is Over. If You Want It…); Episode 8 (Behold, The Hanging Gardens of Chelmsford); Episode 9 (Hans? Are We The Baddies?); Episode 10 (The Essex Superstate Takes Shape); Episode 11 (You Cannot Kill Keith Richards); Episode 12 (I Still See Gandhi’s Face At Night When I Close My Eyes); Episode 13 (For Some Reason, The Natives Resent Colonialism)

As the older part of Essex gears up its economy with grocers, banks and courthouses in every city, the newer part fights for survival. Every year, more barbarians pour over the borders to attack our cities. It’s impossible to negotiate with them, there’s no way to placate them. It’s so unfair. All we’ve done is drop tens of thousands of people onto their ancestral lands and stationed our troops outside their cities while we drill their hills clean of precious metals. They’re so touchy.

Nevertheless, it seems that only way to secure peace is through subjugation. The curiously named city of Polynesian is our primary target, but we don’t have the troops to guarantee success. I’ll need three more catapults at least before I feel confident of going in there. 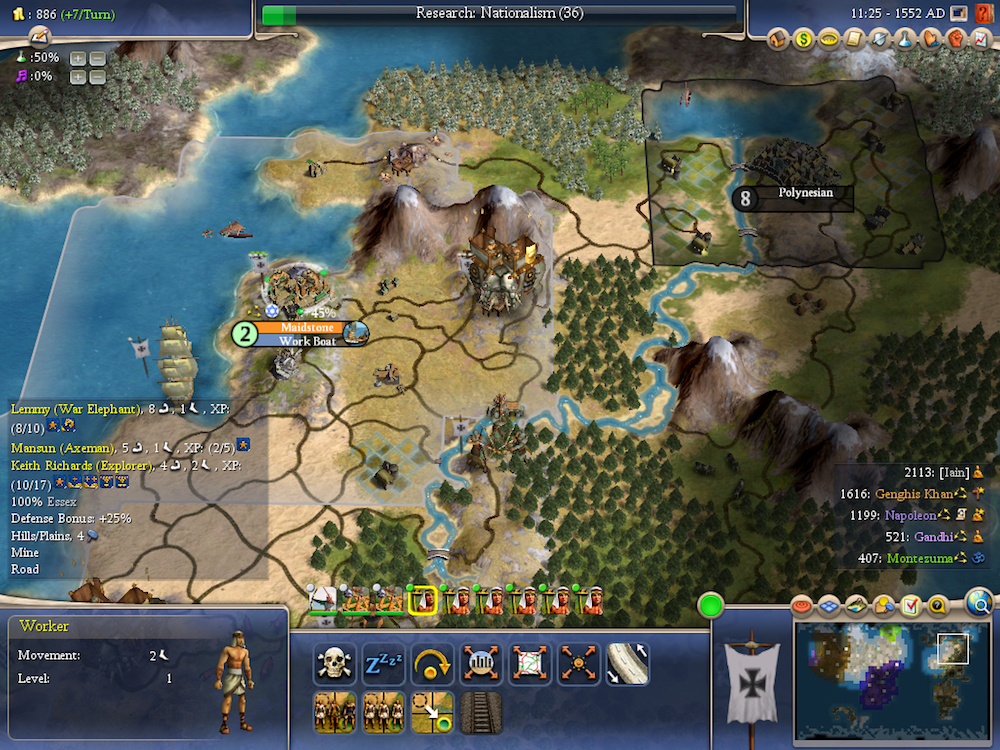 And while I’m trying to get organised, the attacks continue. Fortunately, Henry Rollins and Lemmy seem to have this covered. Nothing is getting past them. 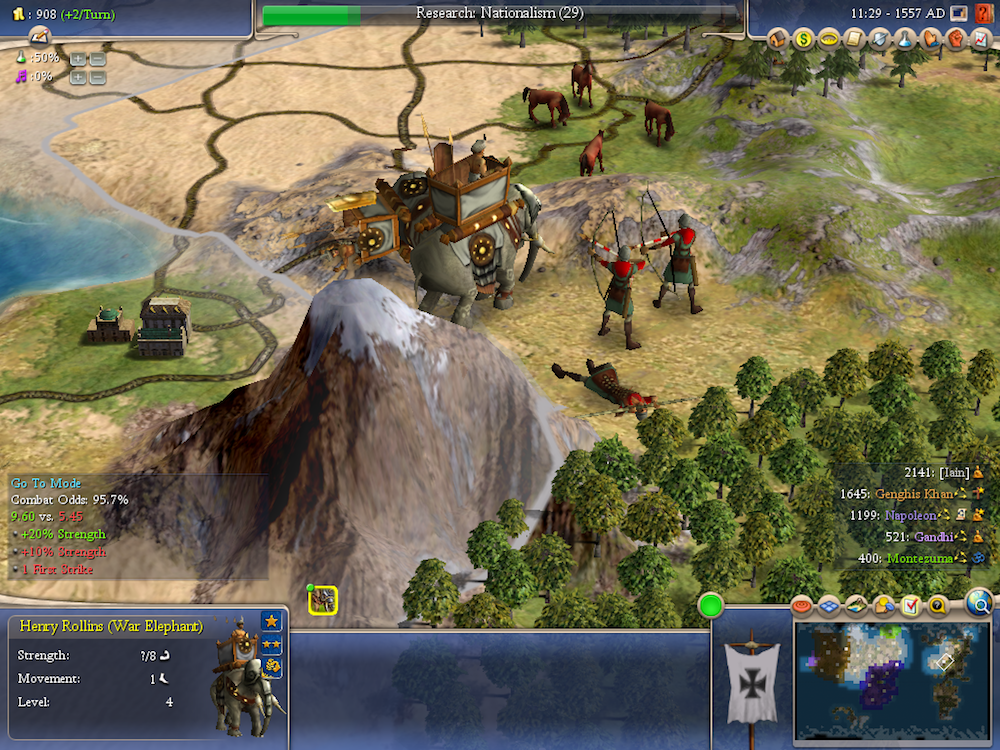 But for bigger missions, we need bigger armies. And that’s why I’ve commissioned Nirvana for the express purpose of pacifying Polynesia. They arrive in 1564 aboard my trusty galleon, the HMS Wu Tang. 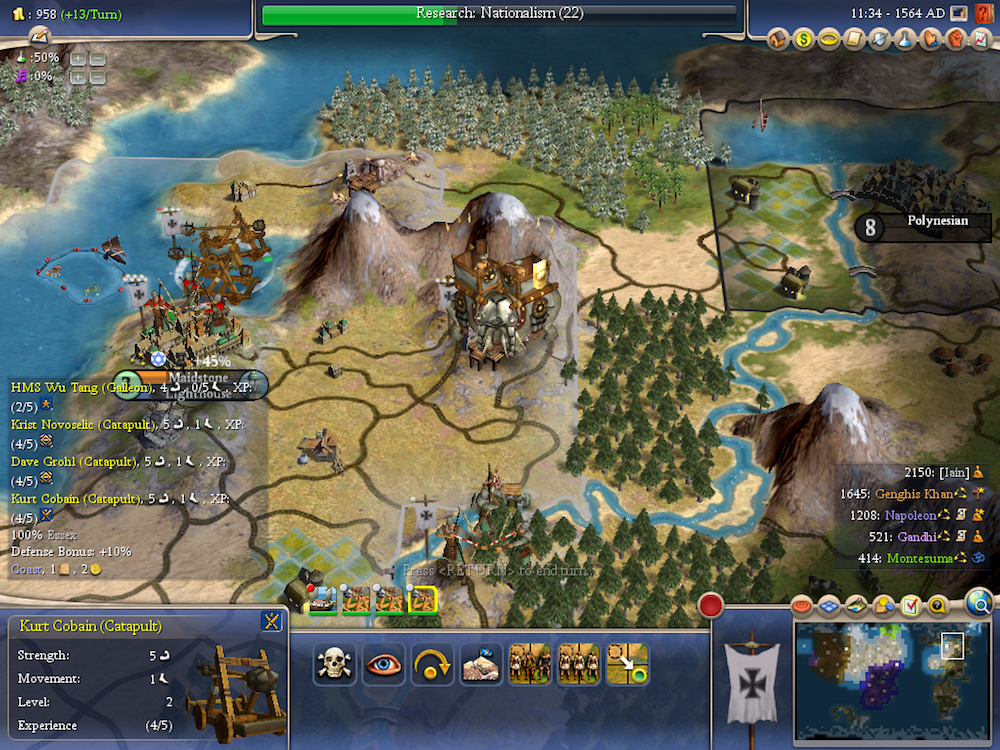 And I was right to take a little extra time on this one. Polynesia is built on top of a hill, protected by city walls and garrisoned by two divisions of longbowmen. In the ensuing assault, I lose Kurt, Krist and That Nice Dave Grohl to their arrows. 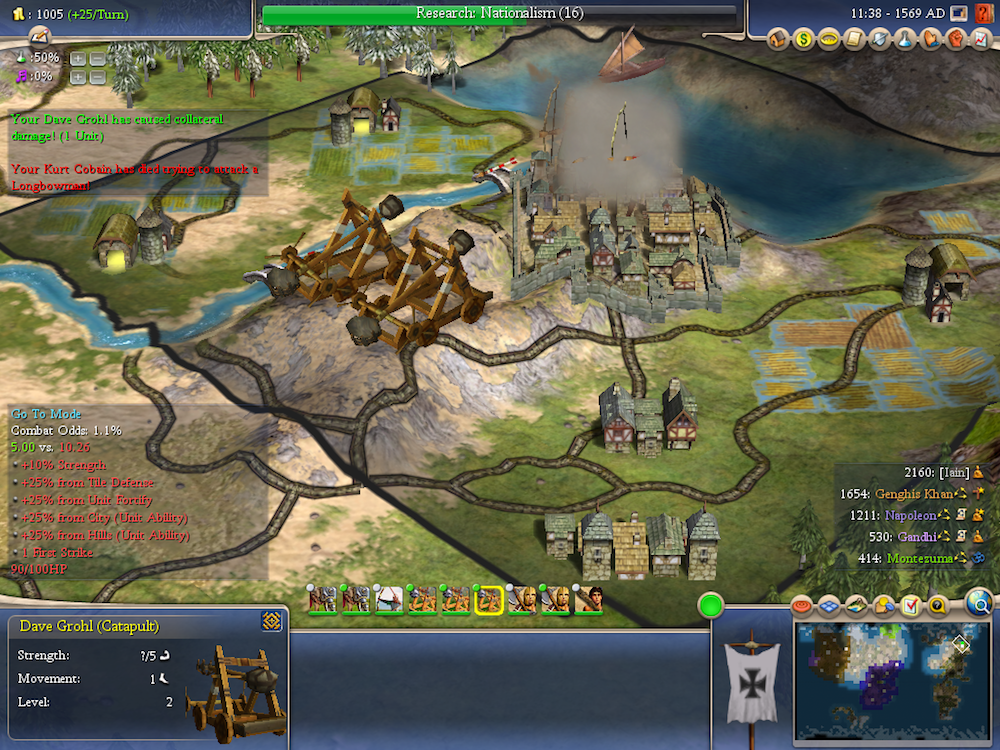 In the end, it’s Lemmy who finishes the job, crushing the indigenous resistance under his mighty feet. The more I think about it, the more I owe Lemmy and Henry Rollins. If you want a job done right, get an elephant to do it. 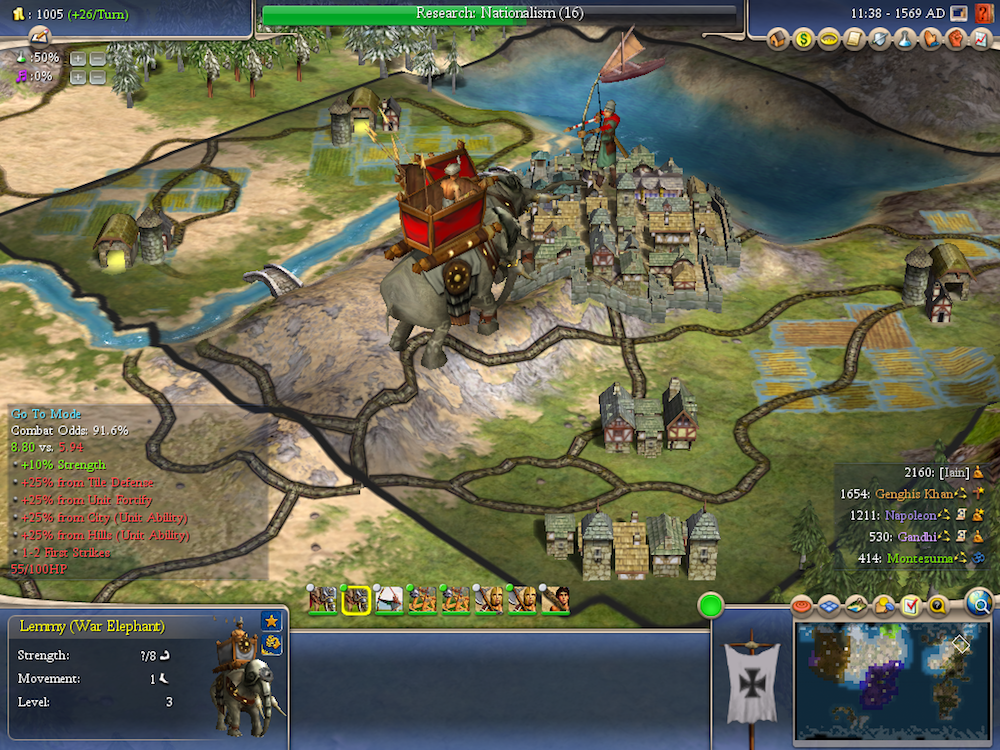 I’m in luck. The extraordinary cultural achievements back in the motherland have granted me a great artist in Clacton. They can expel piles of cultural points that spread the borders of a city in one go and that seems a jolly good idea. The HMS Wu Tang duly sails back to Clacton, picks up the artist, along with a couple of macemen (nearly twice as strong as axemen) as well as Pepsi and Shirley, two newly commissioned longbow…people. A quick bit of rebranding and just look at the success of ‘Canterbury.’ 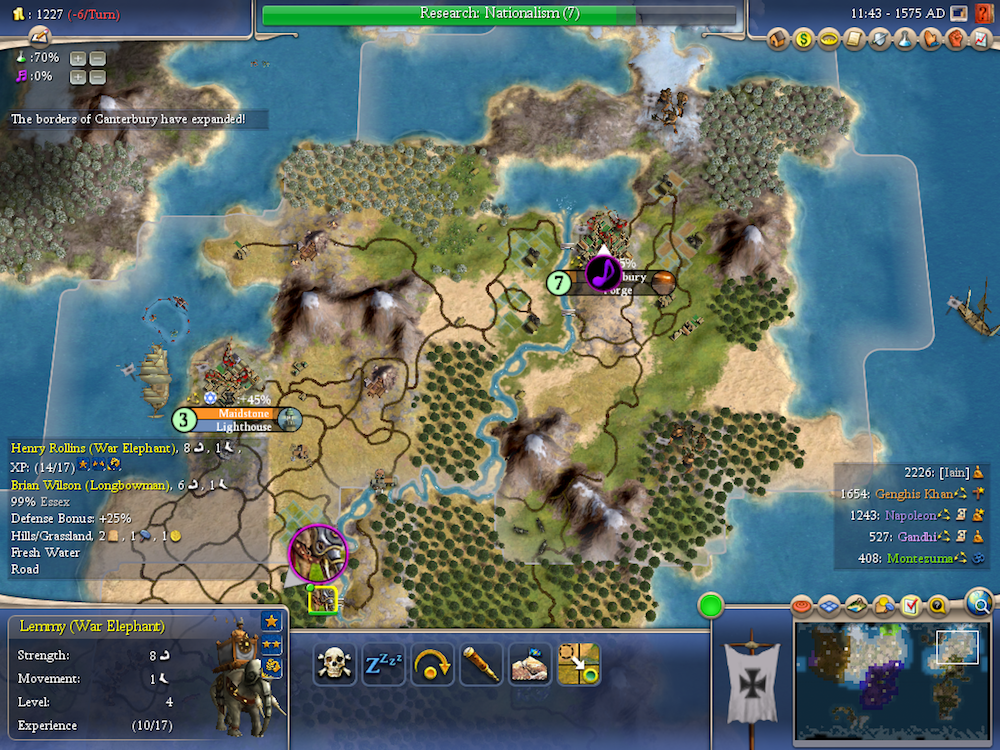 Back home, there’s the slightest bit of trouble when Genghis Khan notices that I’ve quietly made friends with Gandhi again. He is not happy about that at all. I’d like to be friends with everyone. Not merely because I’m a friendly sort of chap, but because I have a powerful economy and open borders are conducive to trade. But I cannot risk alienating Genghis just yet. Sorry Gandhi. 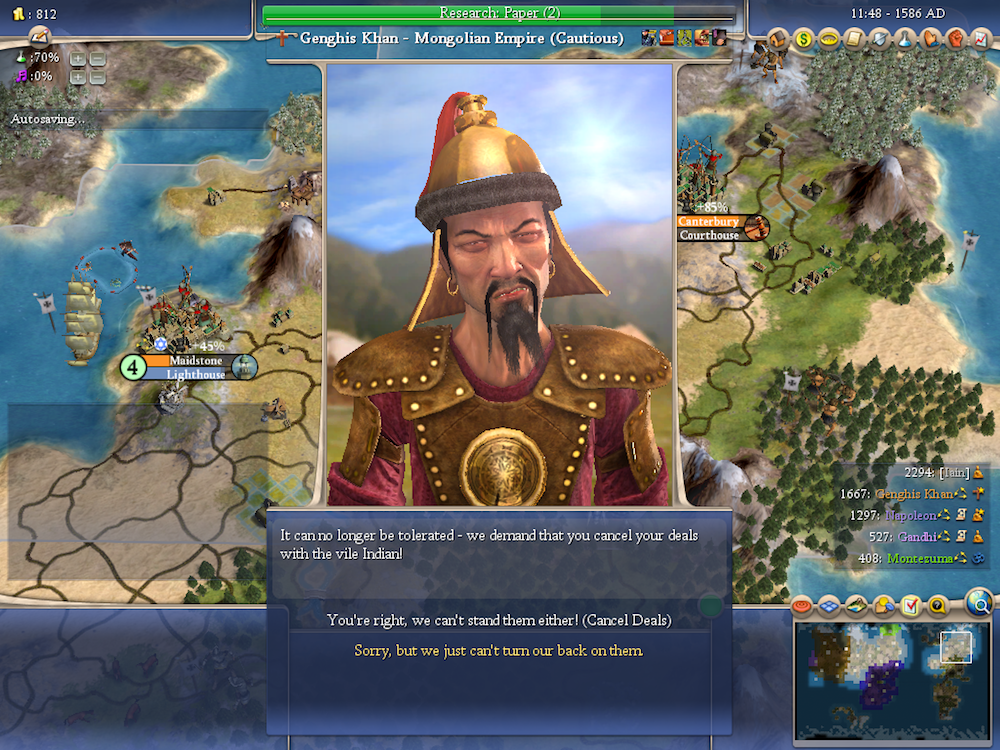 My craven duplicity pays dividends six years later when Genghis offers to open up our borders again. I hungrily accept his terms and conditions. Immediately, I dispatch an explorer to visit every one of his cities and log his troop strength.

Mostly, his cities are guarded by between one and three longbowmen. They nearly all have at least three melee units, mainly axemen, but there are three macemen as well, which is one more than I’ve got. There’s no cavalry, so I won’t need to build pikemen, and there aren’t many catapults either, so a full assault looks unlikely for the time being. As it stands, we could repel an attack from the Mongols, and possibly take a city or two. But a full invasion would be a disaster, we’re nowhere close to being ready for that. Yet. 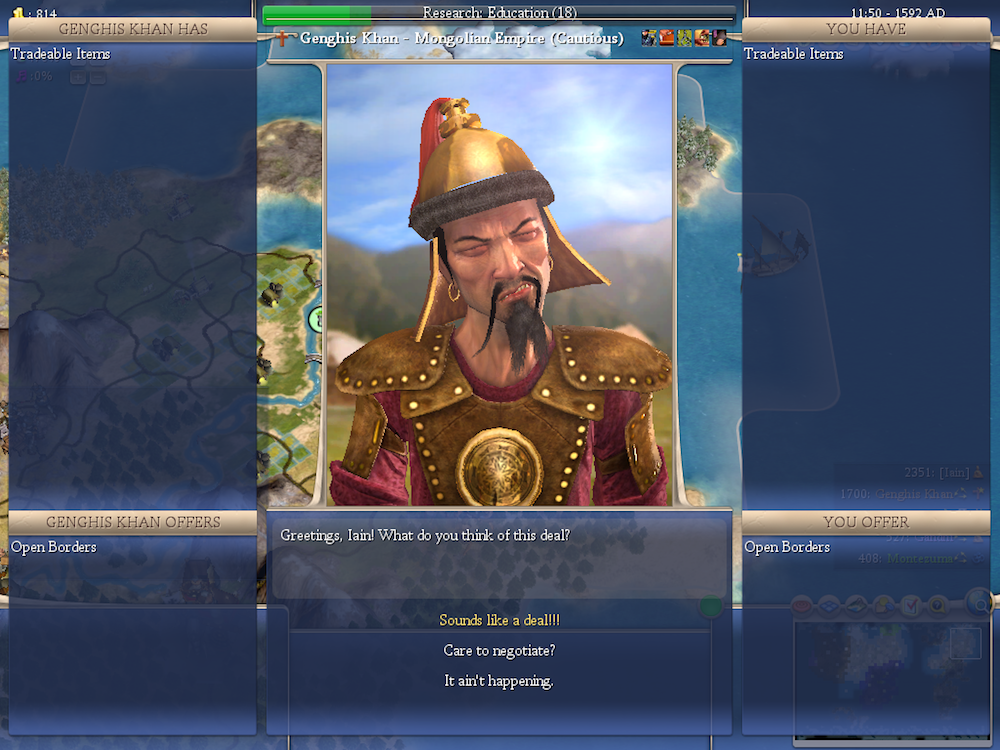 And why would we want to ruin this time of prosperity by embarking on another war anyway? The appearance of a great engineer in Southend is a chance for Canterbury to establish itself as the capital city in the new world. I send him over on the Wu Tang and before too long, he’s clattered together the Taj Mahal. That ushers in an official golden age which, appropriately enough, boosts gold production throughout the empire. 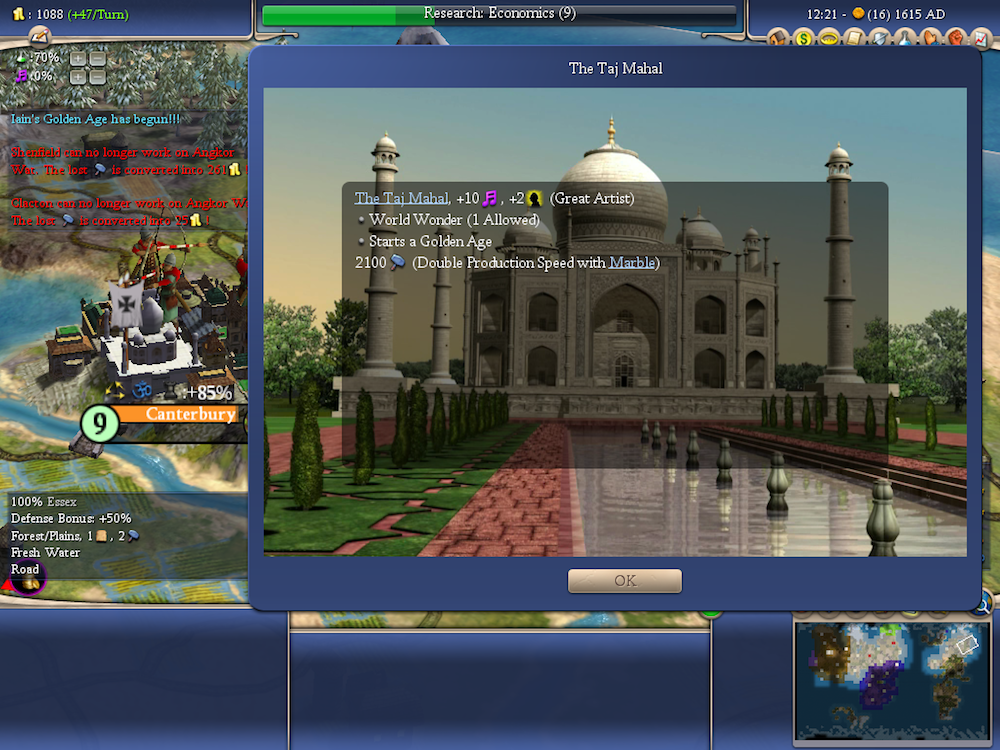 And that’s where you find us in the year of our eclectic range of lords (I’ve never imposed or encouraged a state religion, I was too busy waging war) 1615.

Back in the motherland, we’re starting to build universities in our cities, while everyone else catches up with banks and grocers. The Mongols are powerful, but I believe that my brutal desertion of Gandhi has helped a sort of detente between our powers. The French are pretty tidy too, but significantly smaller and far friendlier. We’re not utterly dominant, but there’s no question of who’s in charge here.

And that’s helped by the fact that no-one else has managed to get to the New World yet. We keep seeing caravels passing by, but they can’t carry troops and settlers, so we’re okay for the moment. I think I should make a move on that large island between Essex and Kent soon, and there’s open territory to the north of Scythian that should be settled soon as well. When we develop free market economics, as we expect to by 1624, then we’ll be the biggest, most populous, most powerful, most educated and most loadsamoney empire in the world. And then we’ll get shit done, you see if I’m wrong. 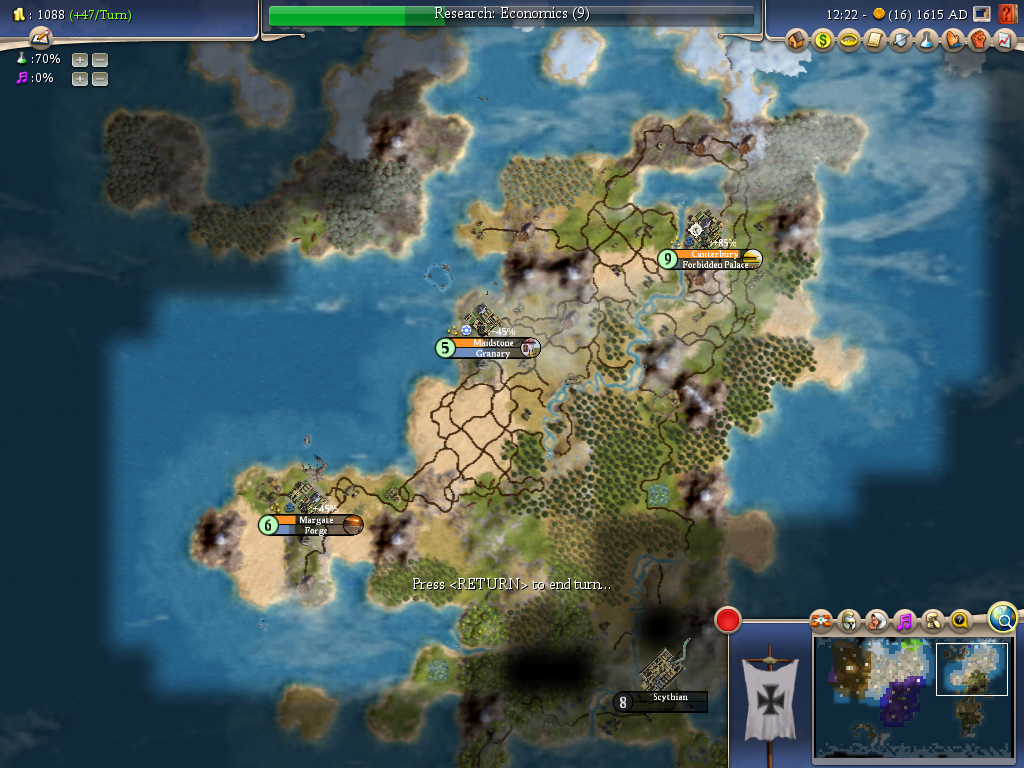