Episode 1 (Birth of a Nation); Episode 2 (The Race for Copper); Episode 3 (Love Me Tender, Love Me Dead); Episode 4 (The Hills Are Alive With The Sound of Screaming); Episode 5 (He Would Do Anything For Chelmsford. Including *That*); Episode 6 (On My Signal, Unleash Montserrat Caballe); Episode 7 (War Is Over. If You Want It…); Episode 8 (Behold, The Hanging Gardens of Chelmsford); Episode 9 (Hans? Are We The Baddies?); Episode 10 (The Essex Superstate Takes Shape); Episode 11 (You Cannot Kill Keith Richards); Episode 12 (I Still See Gandhi’s Face At Night When I Close My Eyes); Episode 13 (For Some Reason, The Natives Resent Colonialism); Episode 14 (Lemmy Crushes The Resistance)

Life is far quieter now that I’m the undisputed, unchallenged superpower on the planet. I have no interest in going to war, I’m carefully managing alliances to ensure that I don’t have to go to war and, as my superiority grows with every passing year, it becomes less and less likely that anyone would be stupid enough to wage war against me.

The development of free market economics and the mass construction of markets, banks and grocers has given me an economy powerful enough to support cities both in the old world and in the new. I quickly claim that island between Essex and Kent for my own (Canvey Island) and then turn my eye to the barbarians in Kent. Slowly, I move my macemen (an advance on axemen and nearly twice as strong) down to form an external perimeter, allowing the workers to keep cracking away without fear of an arrow in the back. I’m a very considerate employer.

In 1637, I eliminate war as a realistic possibility by signing a defensive pact with Napoleon. If Genghis wants to tussle now, he’ll have to take us both on. 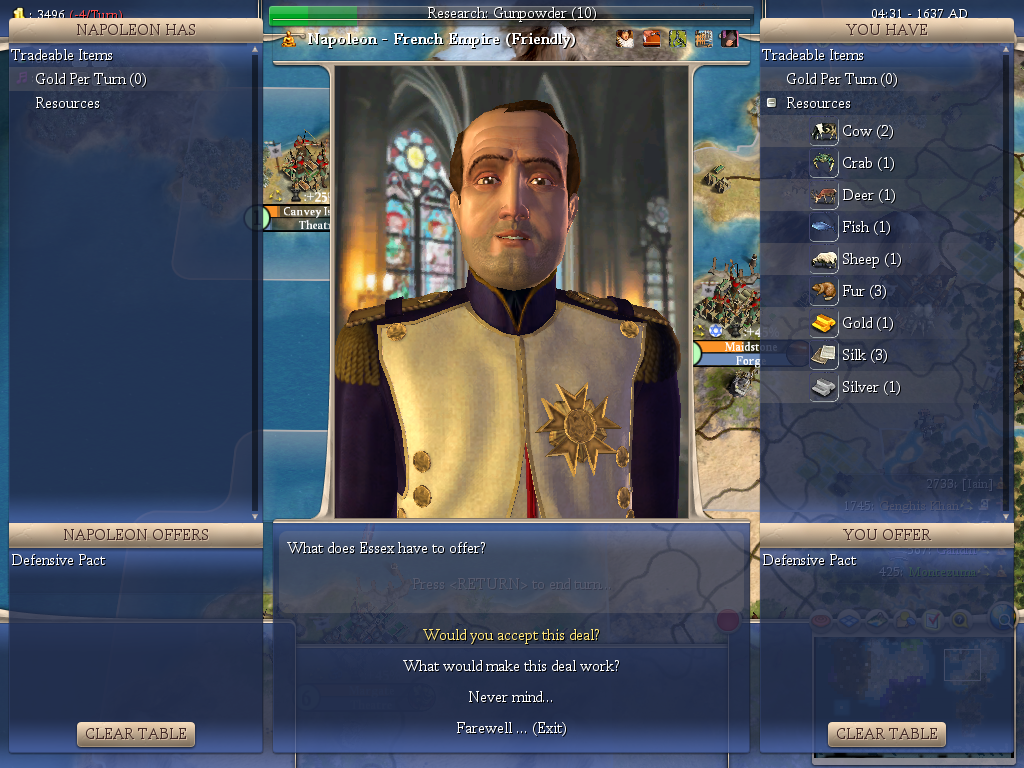 The development of liberalism allows me to further my social programme. In the future, I’ll develop democracy for universal suffrage and emancipation because it causes unrest in all empires without it. But for now, this is pretty positive stuff. We have free speech and free religion to boost culture and science, a free market to boost the economy, and hereditary rule with serfdom to ensure that I and my progeny will reign over these ants forever, dining on the fat of their land and swigging back the sweet sweat of their labour. 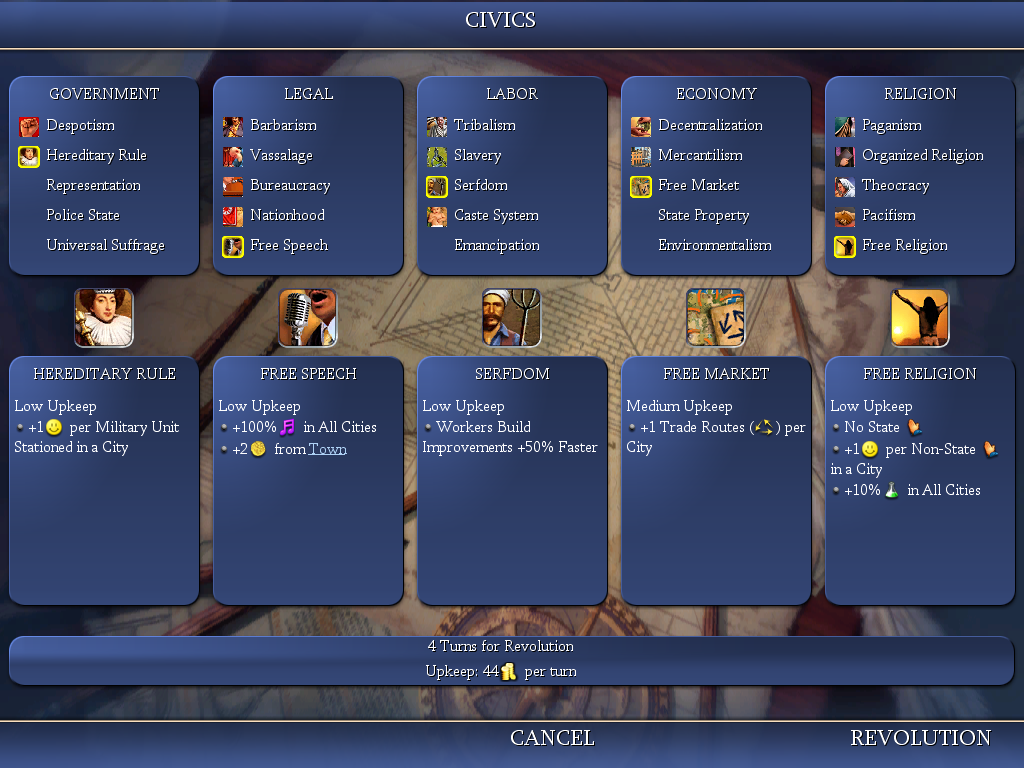 Unfortunately, the defensive pact with Napoleon doesn’t last very long. It’s possible that, as a devout Buddhist, he doesn’t agree with my notion of free religion. This is a shame. I relished that brief period of complete invulnerability. 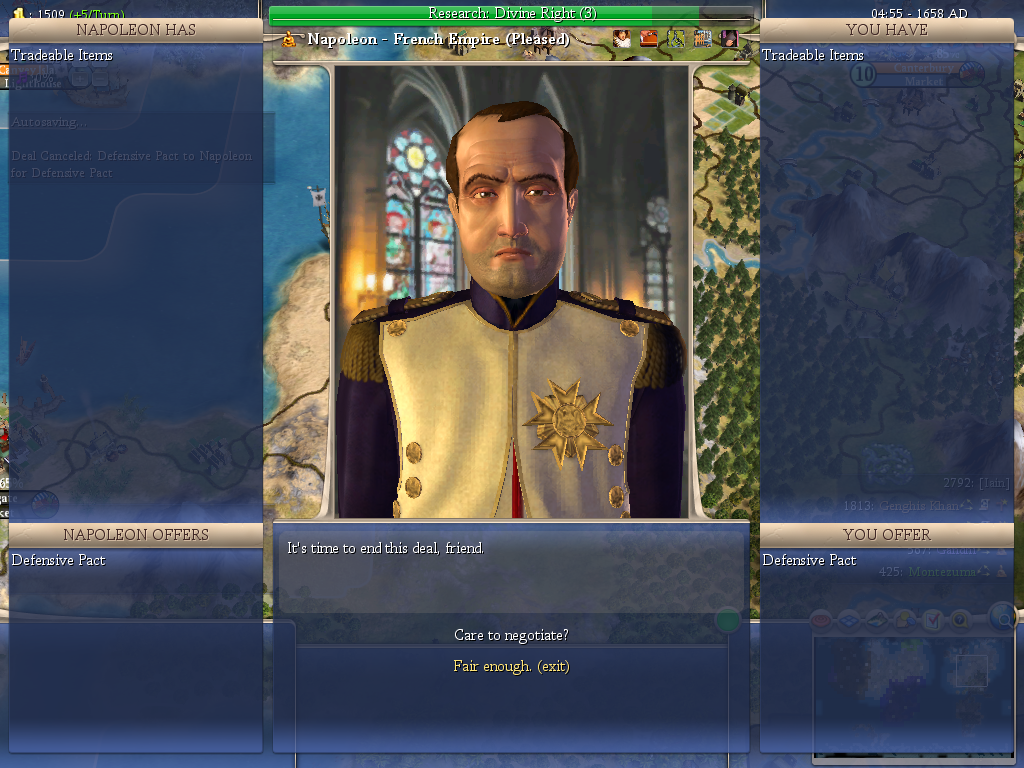 Nevertheless, it behoves us to keep calm and carry on. The New World Army march on Scythian at the same time that a detachment of settlers and archers arrive to fill the gaps in the Kentish territories.

First the catapults go in to soften up the longbowmen, then we hit them with our newly upgraded cavalry units. 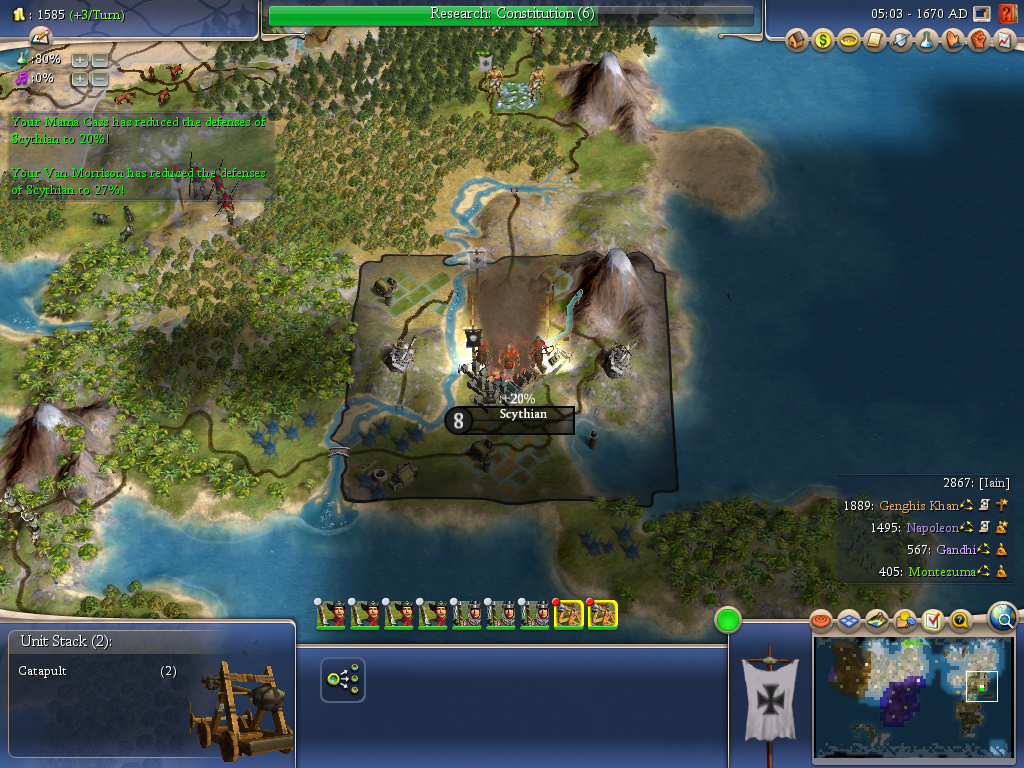 The cavalry are terrifying. They are three times as strong as axemen, nearly twice as strong as macemen. And Scythian has no answer to their firepower. We take the city without losing a single unit. In fact, they barely suffer a scratch. 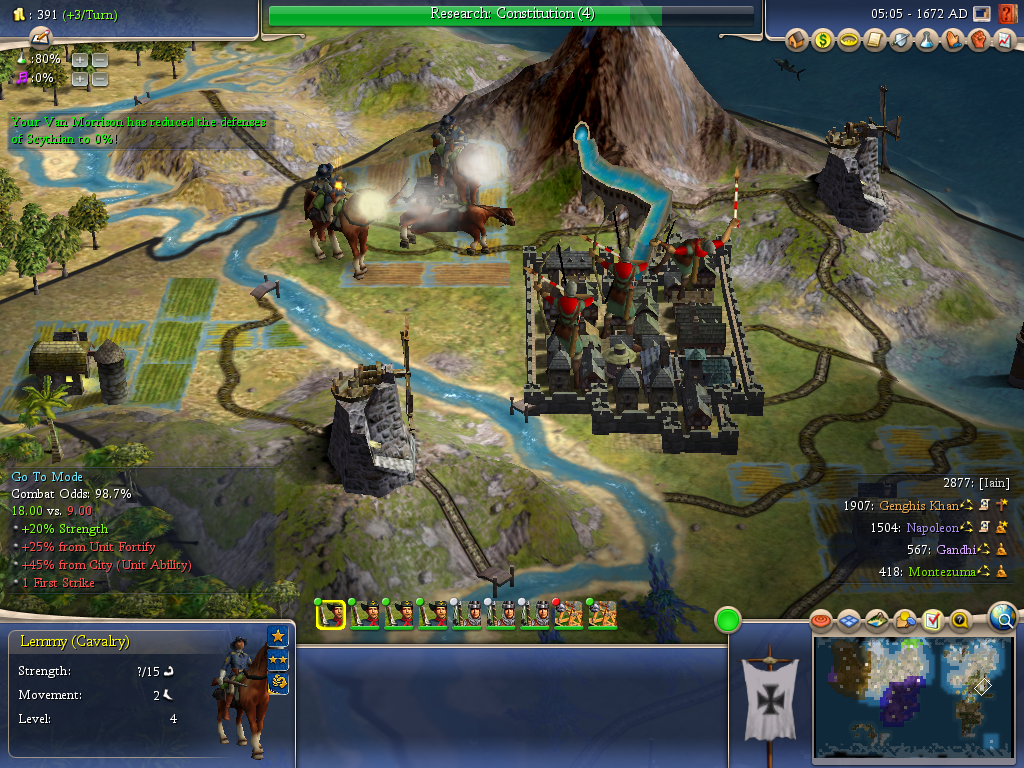 And so the indigenous population is offered the chance to join our swelling empire and recast themselves as the people of Tunbridge Wells. Truly, I am a welcoming, benevolent Emperor. They are fortunate to have met me. 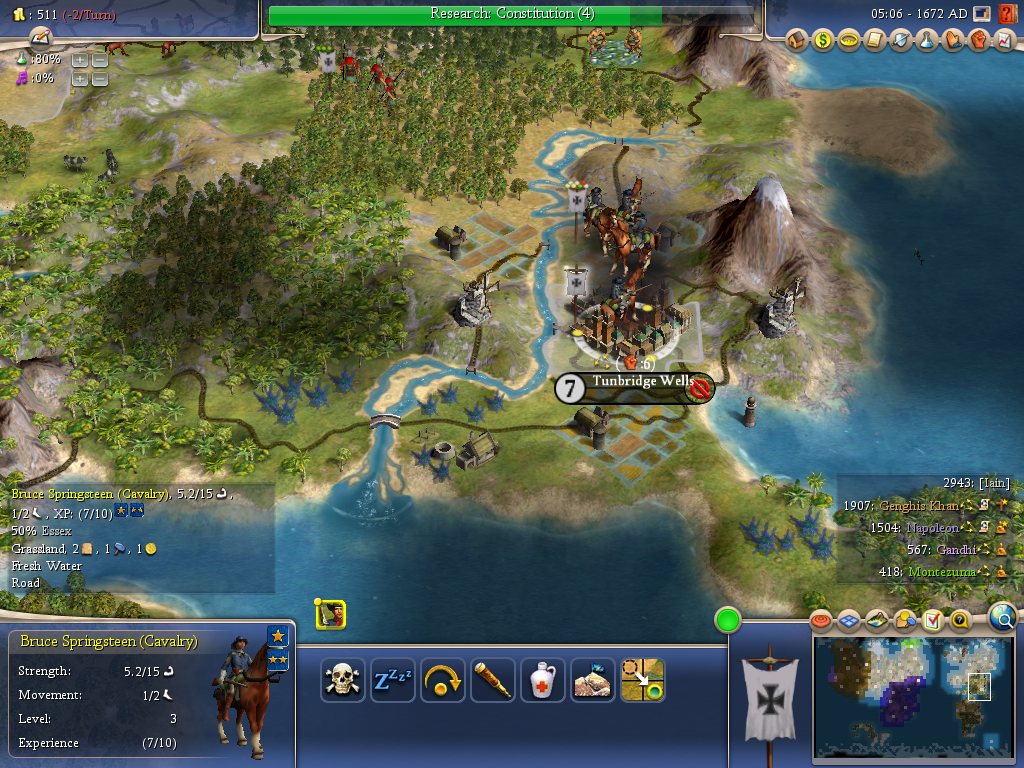 As Tunbridge Wells is pacified, Ashford is established in the forests. We now have almost the entirety of the northern territory. Given that I am still the only one on this world who knows how to make galleons, I could push on and take the whole landmass.

Alternatively, it might be more fun to pursue a different line of thought. If I was to sell them the secrets of astronomy, for an appropriately extortionate price, then they would be forced to rush against each other to snap up the relatively small patch of land still available. They would break their backs to build galleons and settlers, they would think of nothing else but establishing their own colonies. Nothing else at all.

Nothing as boring as…the defence of their own lands. 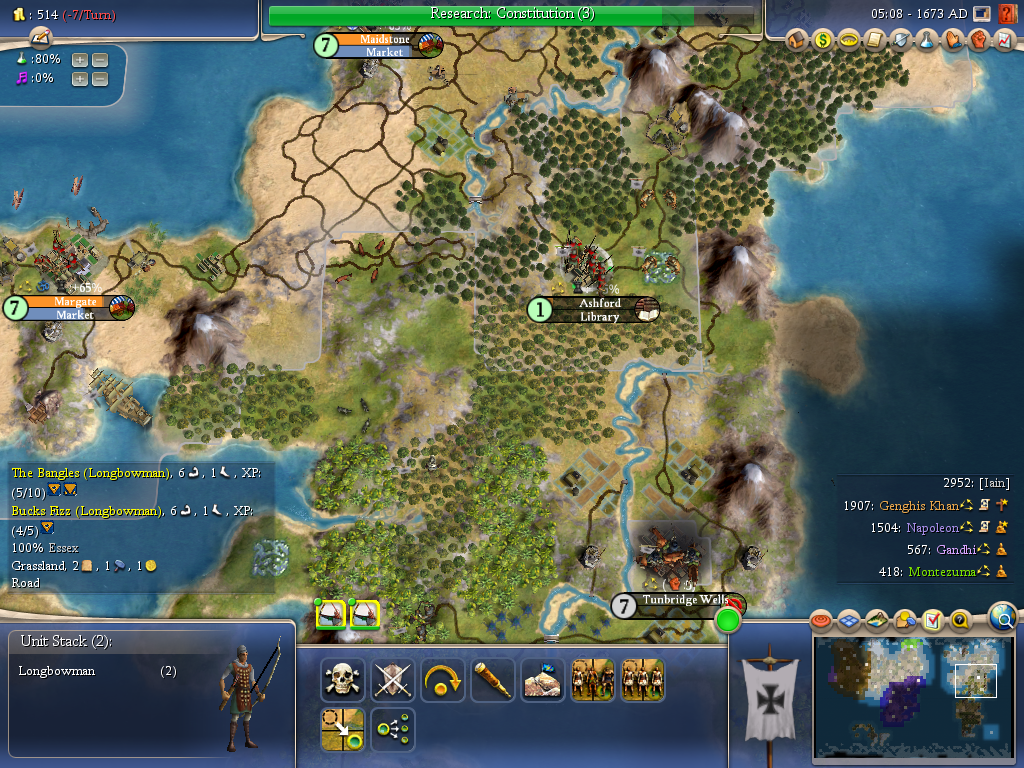 I am not a heartless man, nor am I one who welcomes conflict for the sake of conflict. But it appears that an opportunity has arisen. Distract the rivals with dreams of colonialism and then smite them when their focus slips. We have the ability to build an army that could sweep across the old world, leaving their once proud cities in ruins, their banks ravaged, their aristocratic families destitute, their elders weeping for their slain young and the scent of blood forever on the air.

Dare we take it? 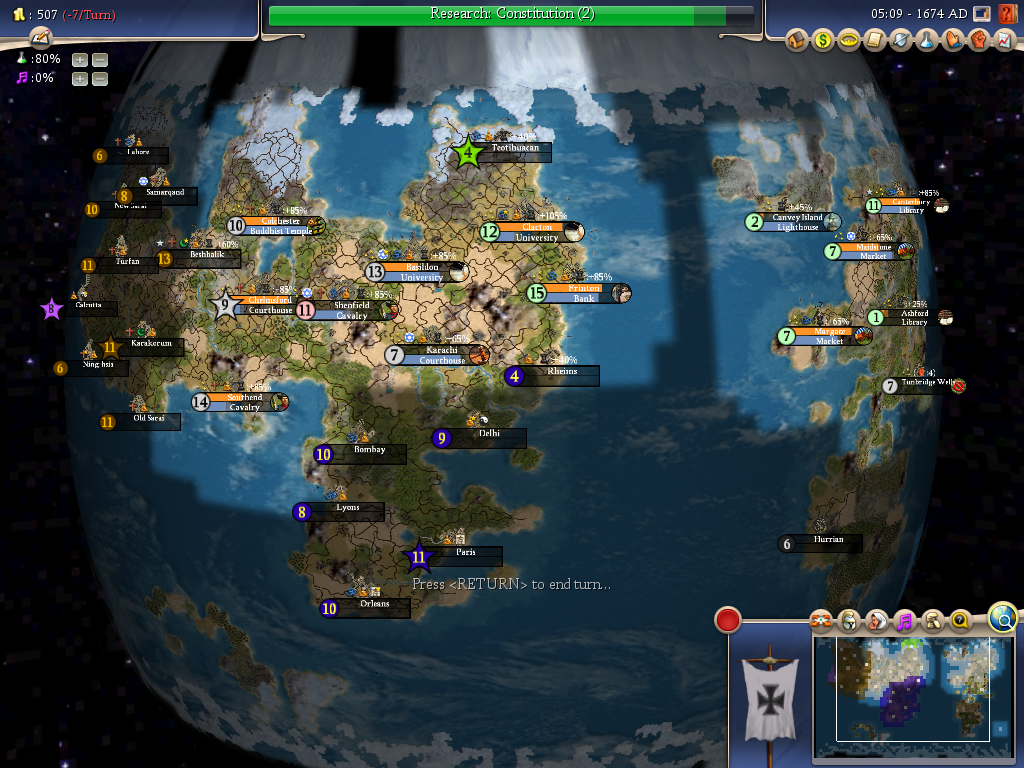 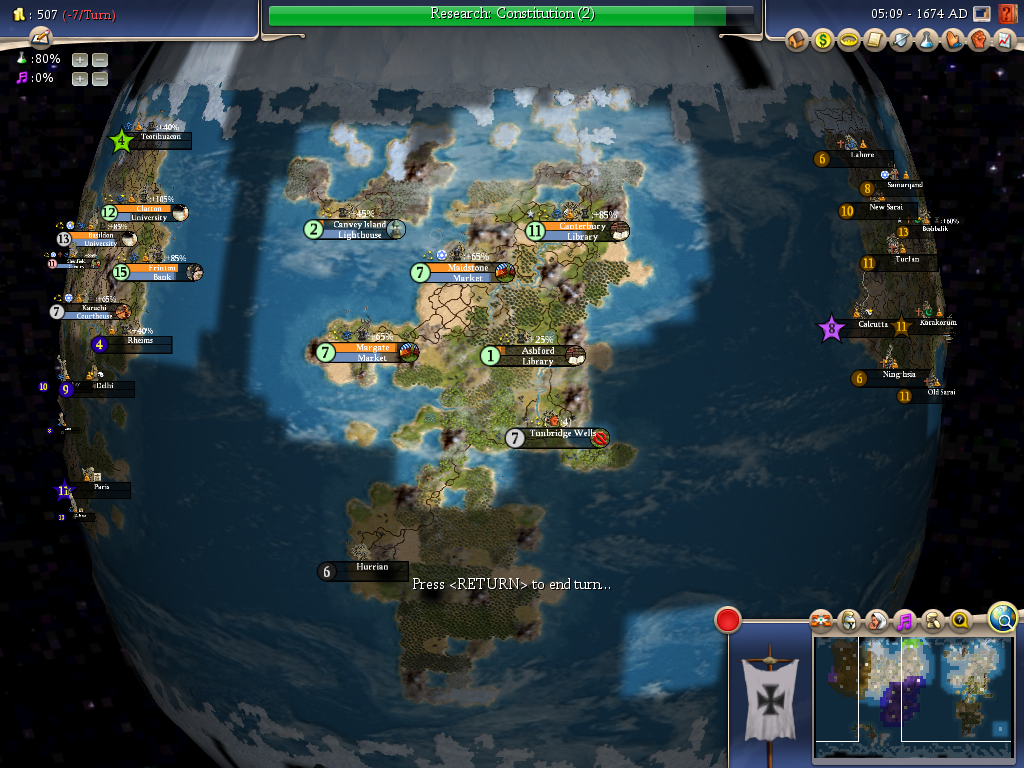