Episode 1 (Birth of a Nation); Episode 2 (The Race for Copper); Episode 3 (Love Me Tender, Love Me Dead); Episode 4 (The Hills Are Alive With The Sound of Screaming); Episode 5 (He Would Do Anything For Chelmsford. Including *That*); Episode 6 (On My Signal, Unleash Montserrat Caballe); Episode 7 (War Is Over. If You Want It…); Episode 8 (Behold, The Hanging Gardens of Chelmsford); Episode 9 (Hans? Are We The Baddies?); Episode 10 (The Essex Superstate Takes Shape); Episode 11 (You Cannot Kill Keith Richards); Episode 12 (I Still See Gandhi’s Face At Night When I Close My Eyes); Episode 13 (For Some Reason, The Natives Resent Colonialism); Episode 14 (Lemmy Crushes The Resistance); Episode 15 (Soon I Will Be Invincible)

If aliens arrived tomorrow, you have to wonder what they’d make of us. Here is a species that crawled out of the water and evolved to dominate their planet completely. Of all the creatures with whom they share the earth, they are not the strongest nor the fastest nor the most organised and yet, in a relatively short space of time, humans moved from caves into cities, they swapped wooden clubs for powerful guns, they looked to the stars and then they reached out to almost touch them. But they live, every single day, under threat of annihilation. They devote huge shares of their collective resources to the construction of apocalyptic weapons and then they point them all at each other. At any given time, this ruptured, factionalised earth could be rendered uninhabitable by its own inhabitants. That cannot be allowed to continue.

If we are to do more than simply reach for the stars, if we are to be all that we can be, if we are, for want of a better phrase, to finally grow up, we cannot do it as a divided people. No longer can our petty differences be allowed to hold us back. For the sake of humanity, I’m about to lay waste to these fuckers and rule the world.

And so slowly I have drawn my plans against the Mongols. The others will be vanquished later. Ironically, I’ve taken a lesson from the real life Napoleon and I’ve decided to create three ‘corps’, smaller and more mobile than a superstacked army, able to adapt to changing battlefield circumstances. With five catapults, five calvary units and four macemen, they’ll be able to do anything from taking a city to holding a hilltop.

I’ve mapped out the Mongol territories and catalogued their forces. They are reasonably well defended, but hardly invulnerable. An initial three-pronged push across the border should be enough to take their nearest three cities, especially with the element of surprise. I expect the Mongols counter-attack to come from their more resourceful northern cities, so Attack Group 1 and Attack Group 2 will take their target cities and hold their position. Attack Group 3 will sweep around from the south in a hook shape, a Schlieffen plan, if you will, though I hope it’s rather more successful. 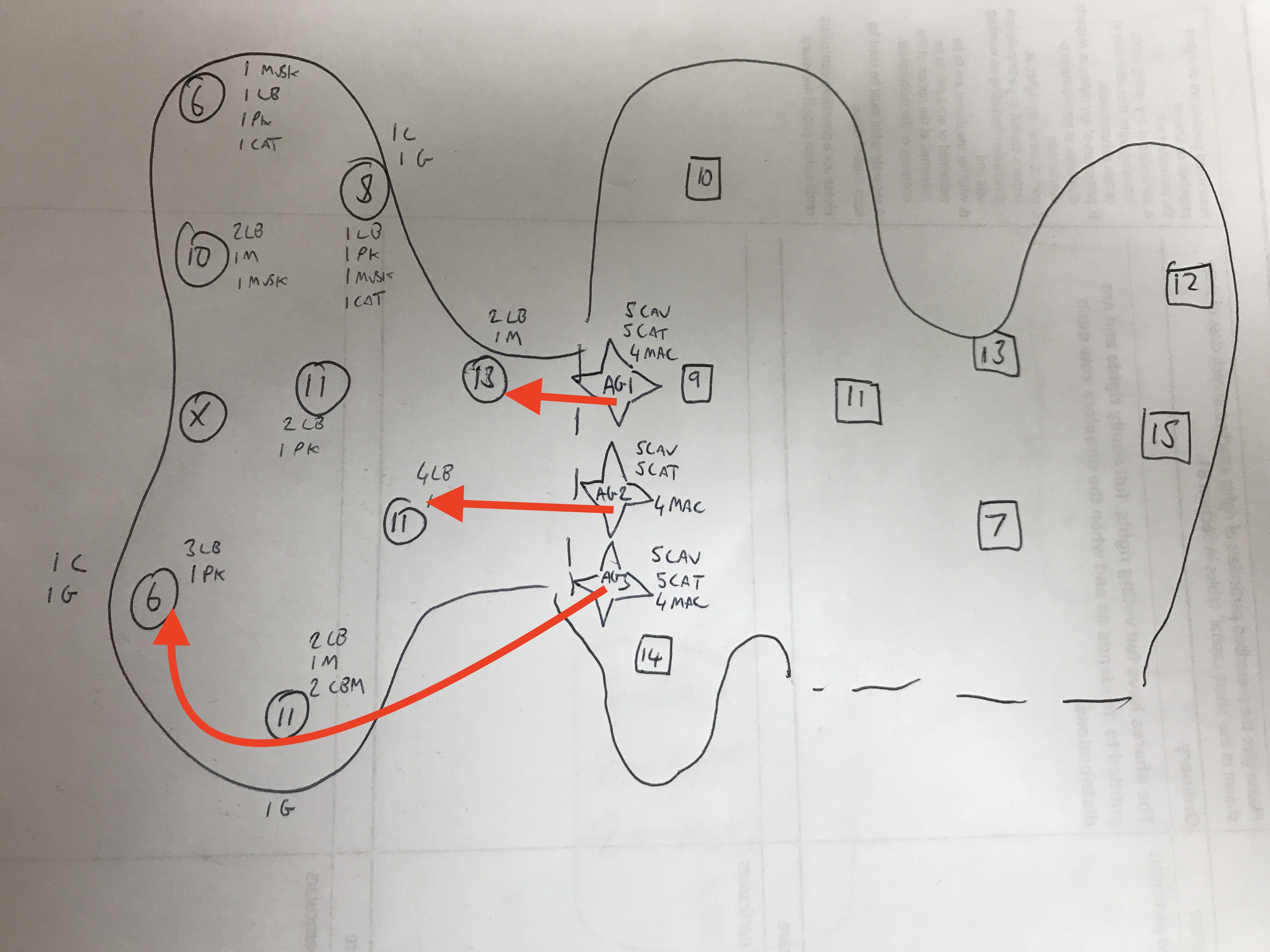 In the meantime, my navy will surge around the coastline, destroying anything in its path and providing valuable intel on troop movements. When the south of the Mongols land is taken, held and reinforced, the three attack groups will push north to complete the job.

There’s only one problem. I don’t have fifteen catapults, fifteen cavalry units or twelve macemen. So I need to get cracking. 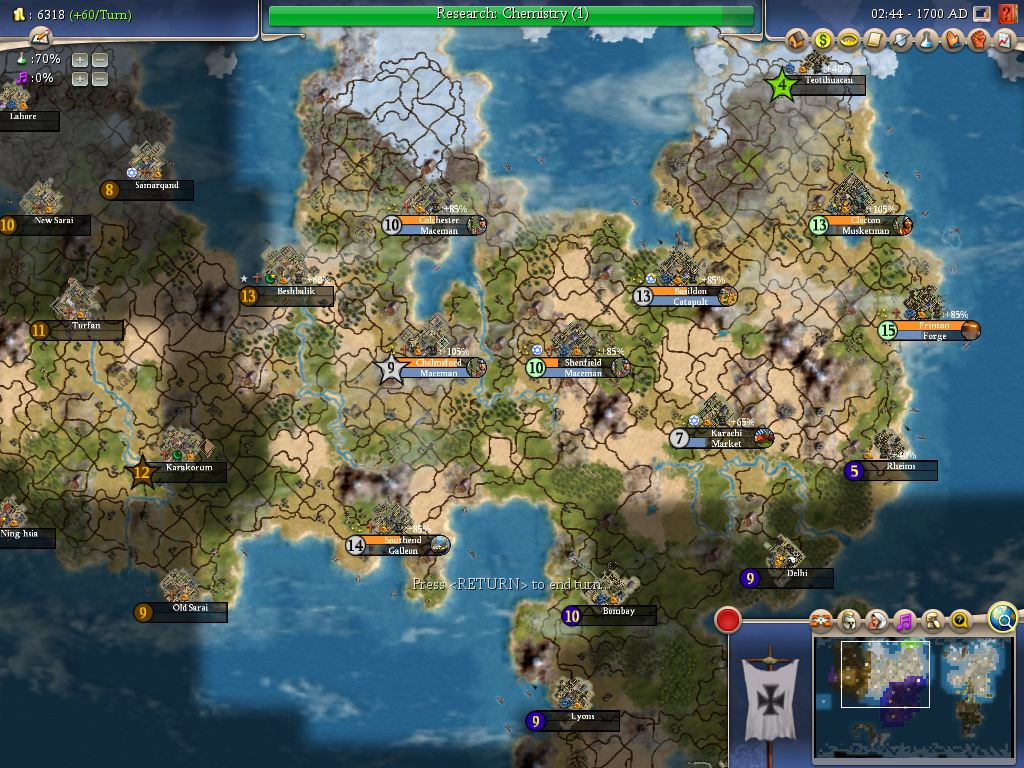 Every Essex city that can construct quickly is therefore ordered to help build me an army. The longer it takes, the more chance that Genghis Khan will suspect something and join in with the arms race. Meanwhile, Kent will focus on financial buildings so as to better support the empire. 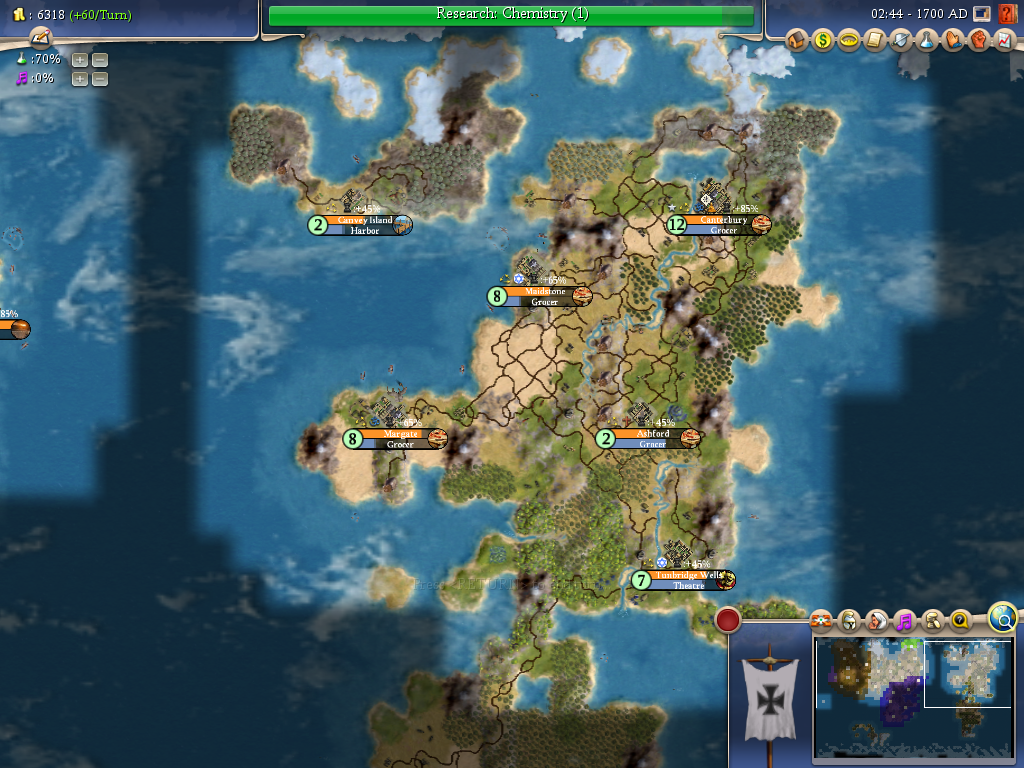 I am also clearing Kent of almost all of their military units, save for two longbowmen in every city and two macemen at the south and north tip to guard against lingering barbarians. No-one else has reached the New World yet and the barbarians are down to their last city. The people of Kent should be quite safe. 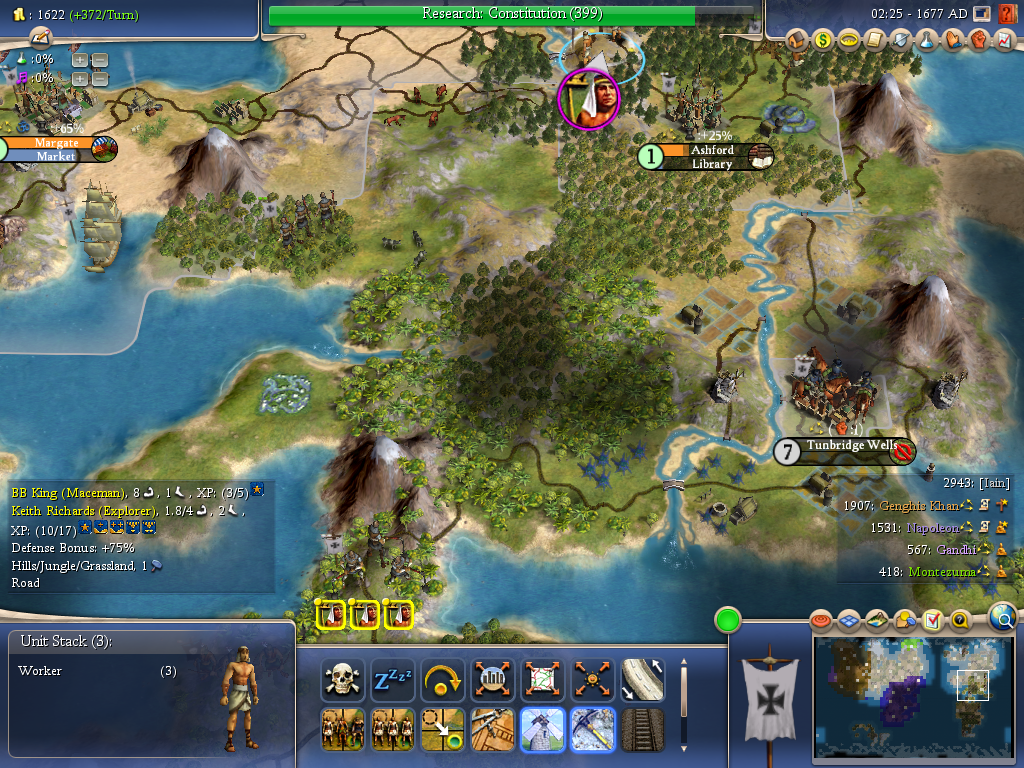 After that, all I need is a suitable “Masikrovka,” a deception to increase the probability of success. The first part of this is simple and again, straight out of the Napoleon playbook.

In the build-up to the Battle of Jena, the little corporal assembled some of his forces near the channel, so as to convince any watching spies that he was continuing with preparations for an invasion of England. Then…whoosh! Off they went to spank the Prussians. All of my troops duly assemble near the French border. If our reality’s Napoleon does anything silly, we’ll crush him. In the meantime, Genghis will have no idea what awaits him.

The second part is even more devious. The secret of astronomy is up for sale and I’ll take whatever you’ve got. You may as well buy it, everyone else will. And once you’ve got it, you can bend your will to crossing the oceans. You can build settlers and workers and galleons. Frankly, I don’t care what you build. As long as you take your eye off the borders and the defence of your lands… 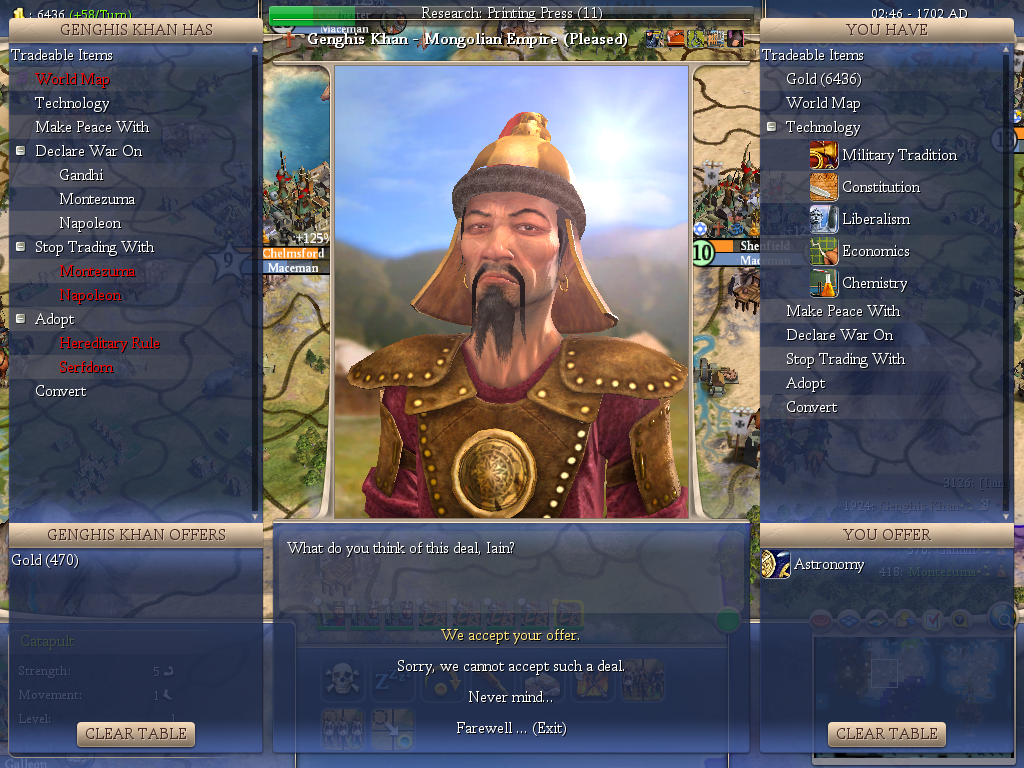 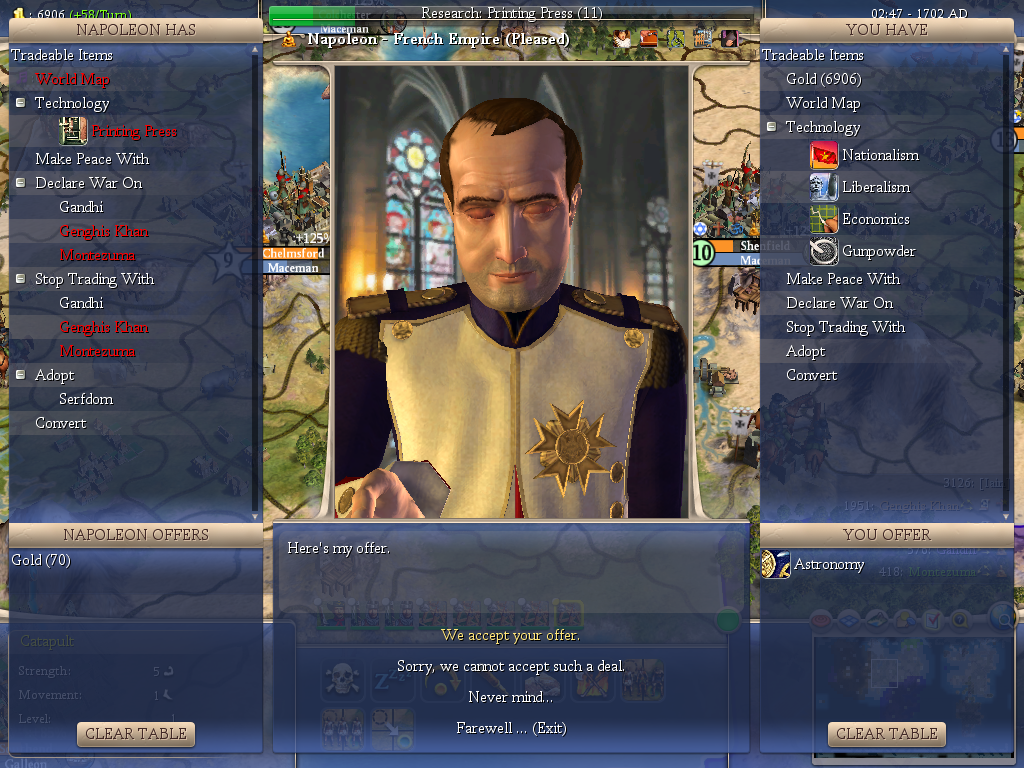 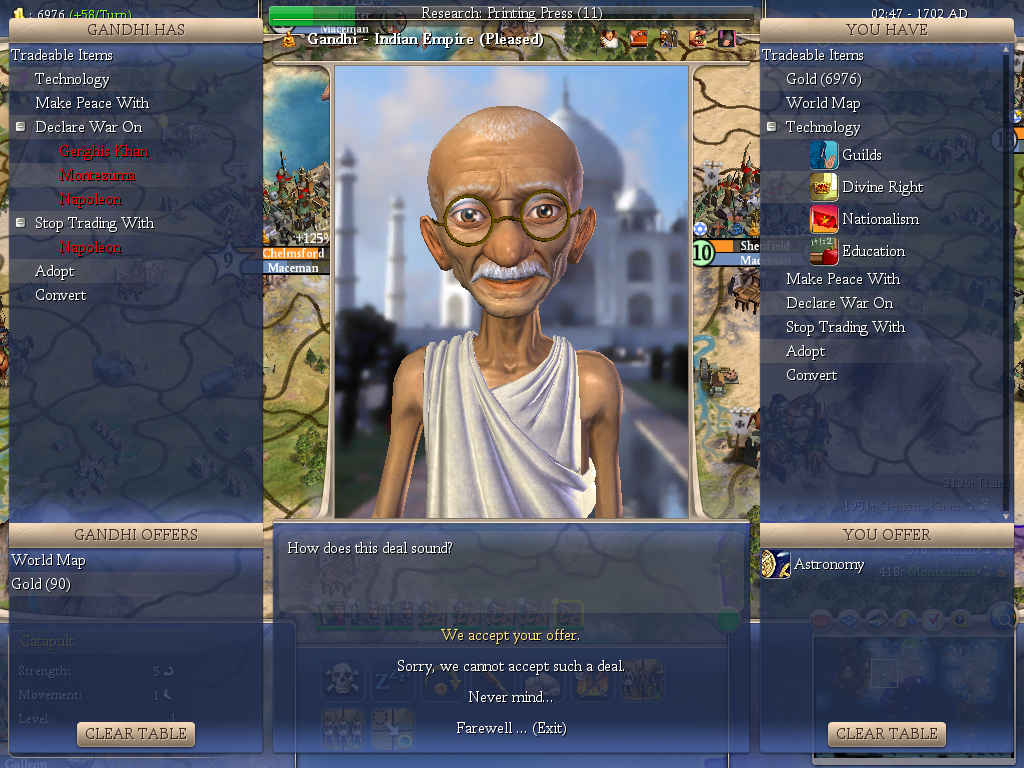 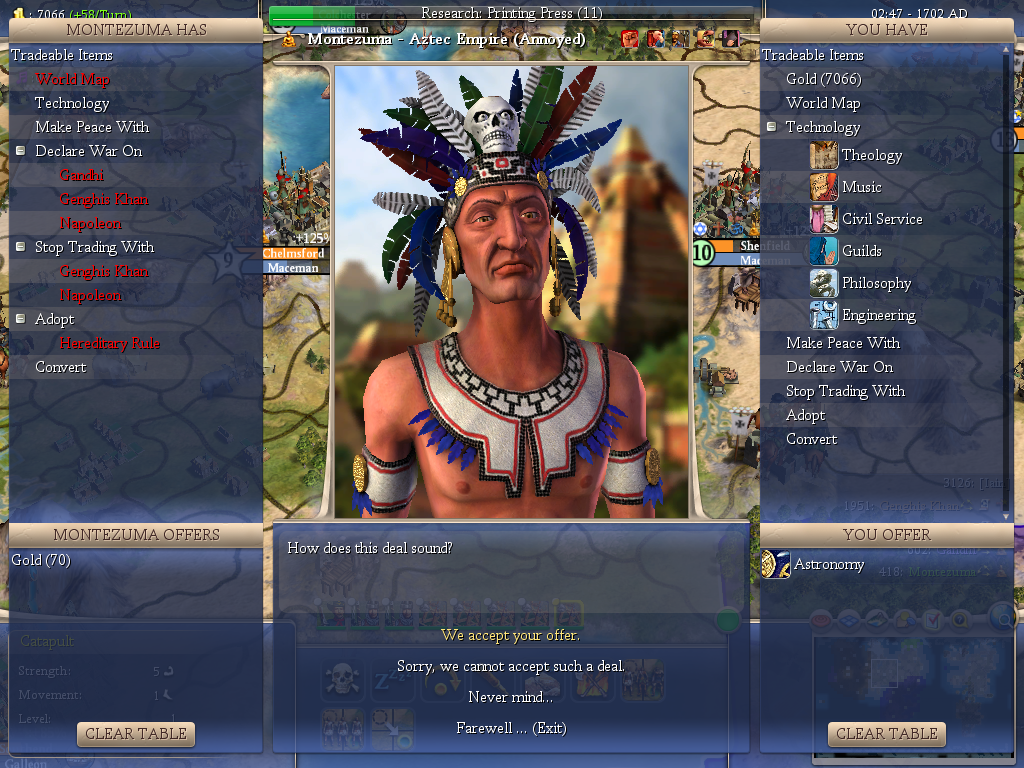 And so, in the year 1713, we are poised to pounce. If we are successful, we will rule the world. If we fall short, well…then ignominy, and I’d imagine a firing squad, await.

Here’s Attack Group 1, led by David Bowie and featuring the not inconsiderable firepower of Buster Bloodvessel. They’ll be taking and holding Beshbalik. 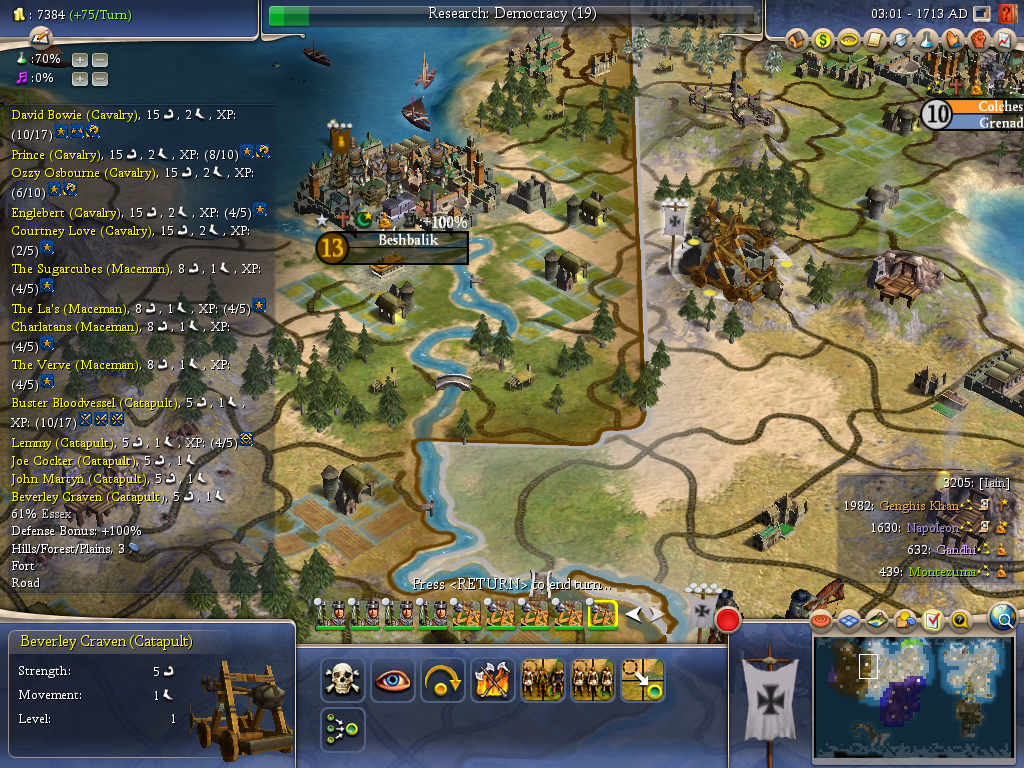 This is Attack Group 2, led by Henry Rollins and backed up by Van Morrison. They have the hardest job as they have to push further in to reach Karakorum. 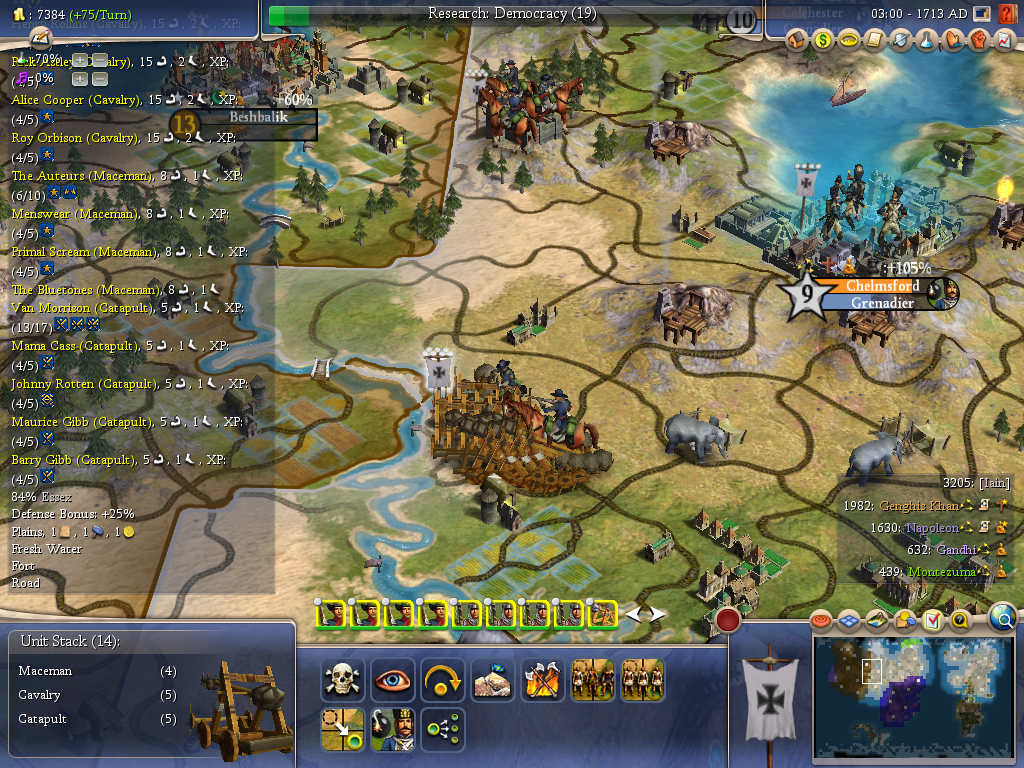 And here is Attack Group 3, led by Bruce Springsteen and featuring every member of the Monkees, but in catapult format. Old Sarai is their target.

There can be no mercy. There can be no truce. Peace, genuine lasting peace, can only be achieved if we unify the planet under the Essex flag. We are doing this for the species, people.

When dawn breaks, we attack. 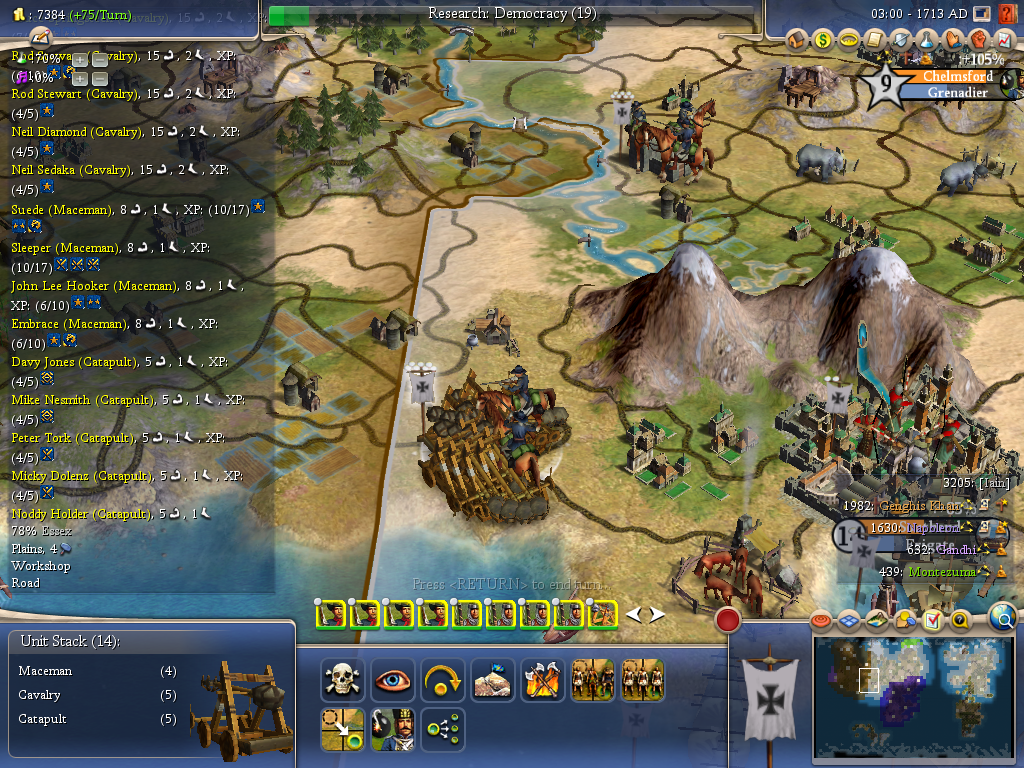