Can a man who failed so miserably with Everton perform any better when bestowed with immortality and granted complete control of an ancient society of hunter-gatherers? Will he win the space race or will his unexpectedly enthusiastic conversion to the principles of combined arms end this affair long before the invention of electricity? Find out now in the series that’s lasted far longer than anyone expected.

Episode 1 (Birth of a Nation); Episode 2 (The Race for Copper); Episode 3 (Love Me Tender, Love Me Dead); Episode 4 (The Hills Are Alive With The Sound of Screaming); Episode 5 (He Would Do Anything For Chelmsford. Including *That*); Episode 6 (On My Signal, Unleash Montserrat Caballe); Episode 7 (War Is Over. If You Want It…); Episode 8 (Behold, The Hanging Gardens of Chelmsford); Episode 9 (Hans? Are We The Baddies?); Episode 10 (The Essex Superstate Takes Shape); Episode 11 (You Cannot Kill Keith Richards); Episode 12 (I Still See Gandhi’s Face At Night When I Close My Eyes); Episode 13 (For Some Reason, The Natives Resent Colonialism); Episode 14 (Lemmy Crushes The Resistance); Episode 15 (Soon I Will Be Invincible) ; Episode 16 (You Should Not Have Lent Me That Napoleon Biography); Episode 17 (Buster Bloodvessel’s Blitzkrieg); Episode 18 (See How They Run)

After a lightning war that has seen more than half the Mongol cities fall into my grasp, I rest my weary troops. Three macemen are left to stand guard in the forests south of Samarqand, just in case Genghis tries anything silly. Everyone else piles into Turfan for a bit of well deserved R&R. After two weeks of open mic nights, bingo, carpet bowls and all the Blue WKD a soldier can drink, I merge most of the three attack groups into one terrifying host and march them up to New Sarai. 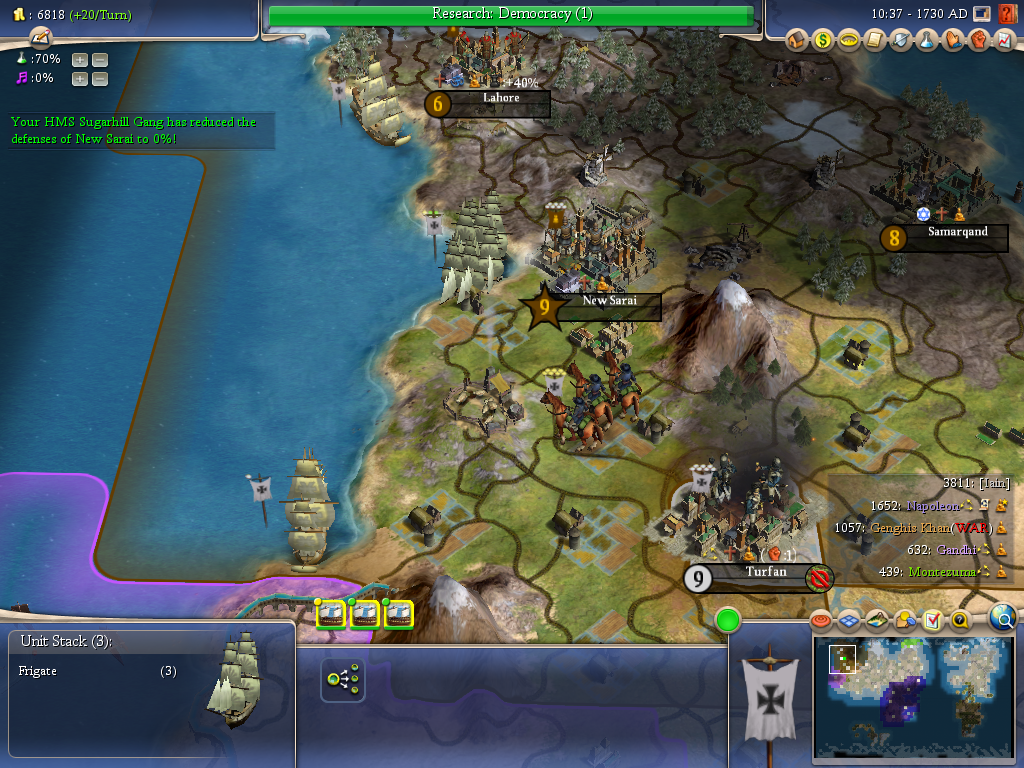 Back home in our capital city of Chelmsford, we’ve finally developed a workable form of democracy. It’s a funny sort of democracy, given that I sit unopposed at the top of the food chain with absolute power over the life and death of every human on earth, but I presume that everyone is okay with this and that the ballot box reflects my universal appeal.

We’re socially liberal, religiously chilled and I’ve taken the handbrake off the economy to embrace the free market with such vigour that onlookers are demanding we get a room. All this, allied to my insatiable pursuit of war, basically makes me Tony Blair. 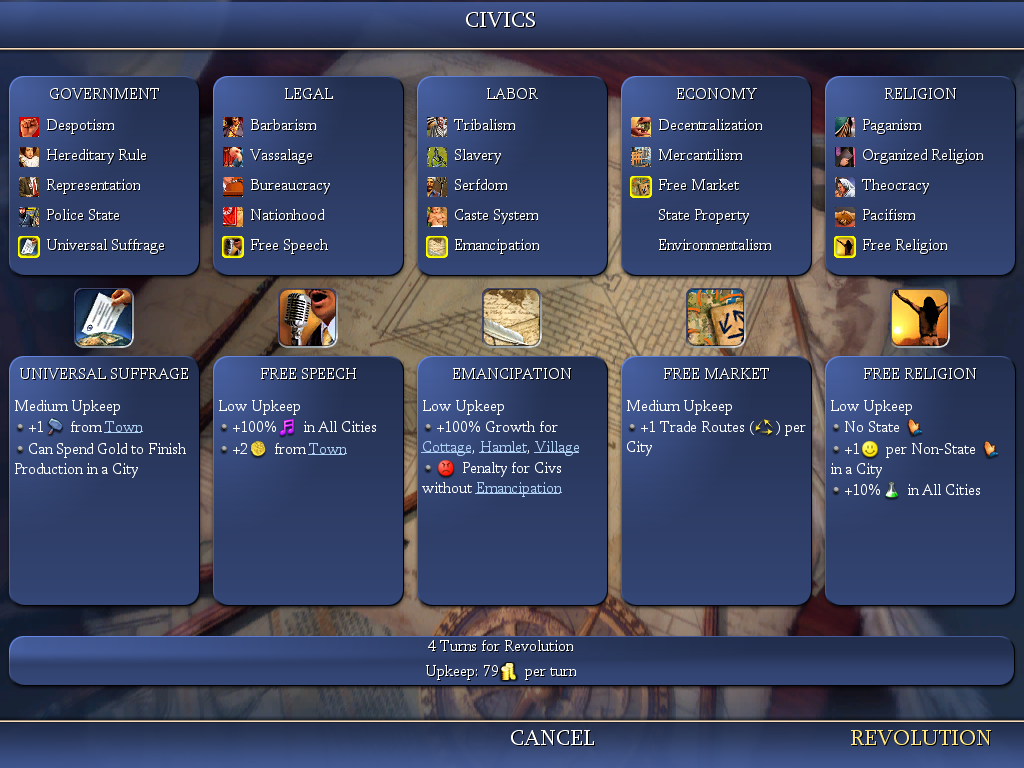 With the walls of New Sarai in ruins thanks to the bombardment from the HMS Wu Tang and friends, the Mongols have no answer to the assault. We take the city without losing a single unit. 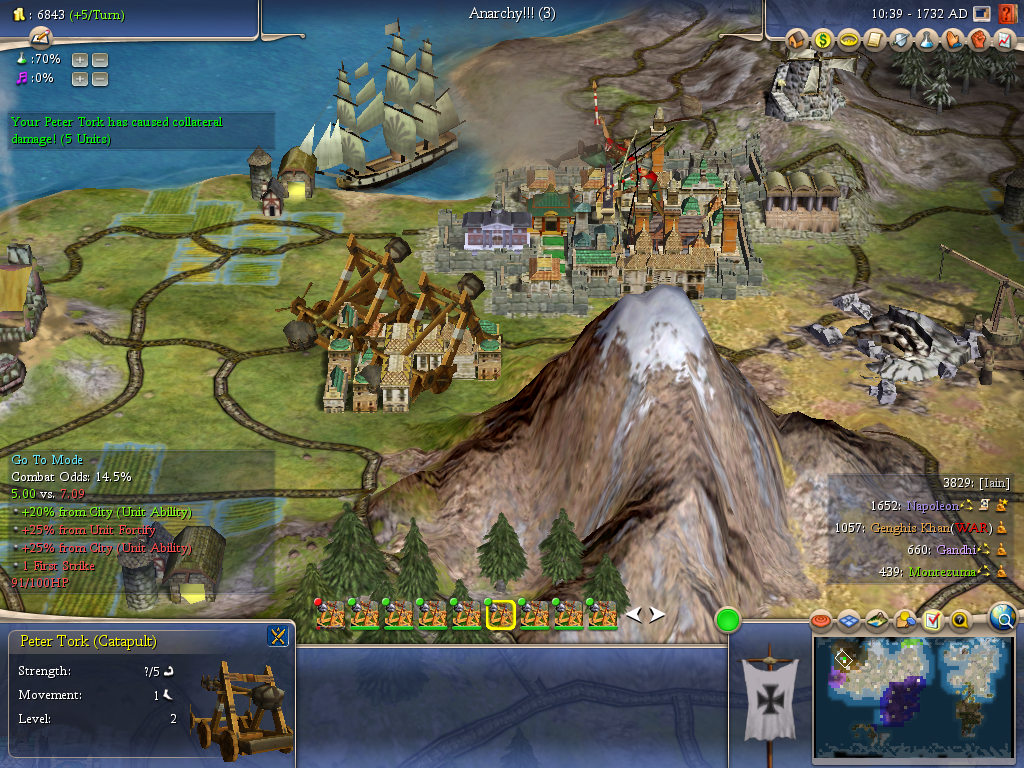 Genghis still holds out in Samarqand and Lahore, but the latter is a tiny city without walls and guarded by only two units. I’ll send a small squad to deal with that and divert the rest of my units east. We shall crush the resistance and then consolidate our position. 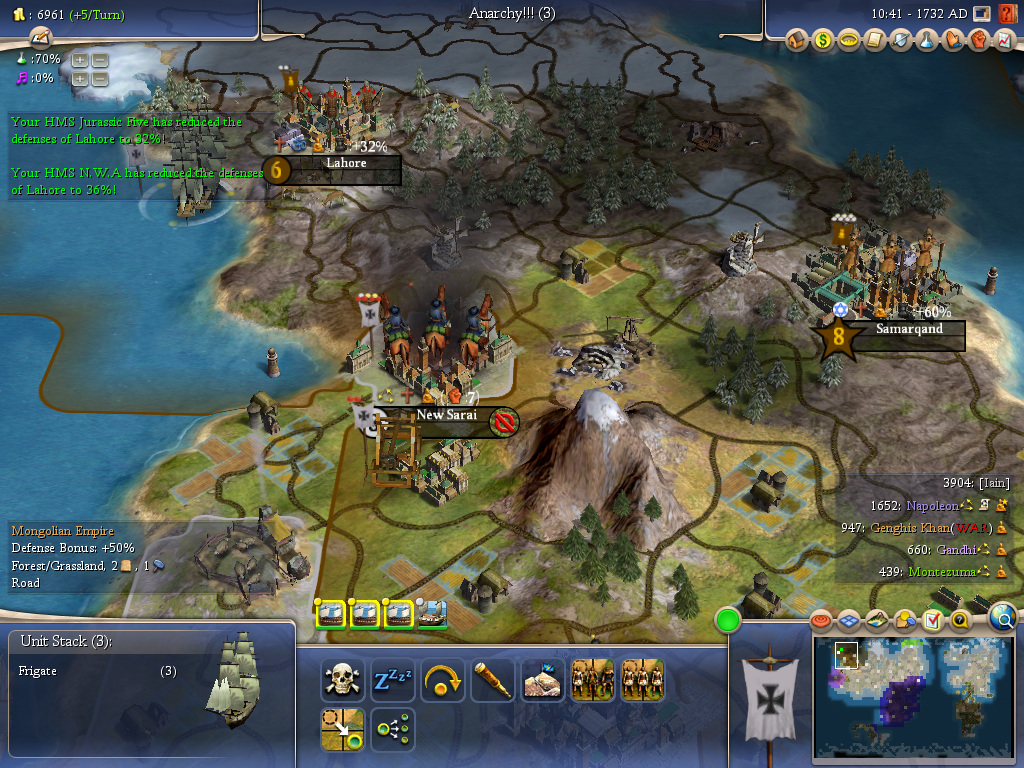 Genghis, of course, wants peace. But I see no benefit in that. I do feel a little sorry for him, but these are dangerous times. Especially if you’re not from Essex. The only way that I can guarantee peace is to wage eternal war. But don’t blame me. I don’t make the rules. 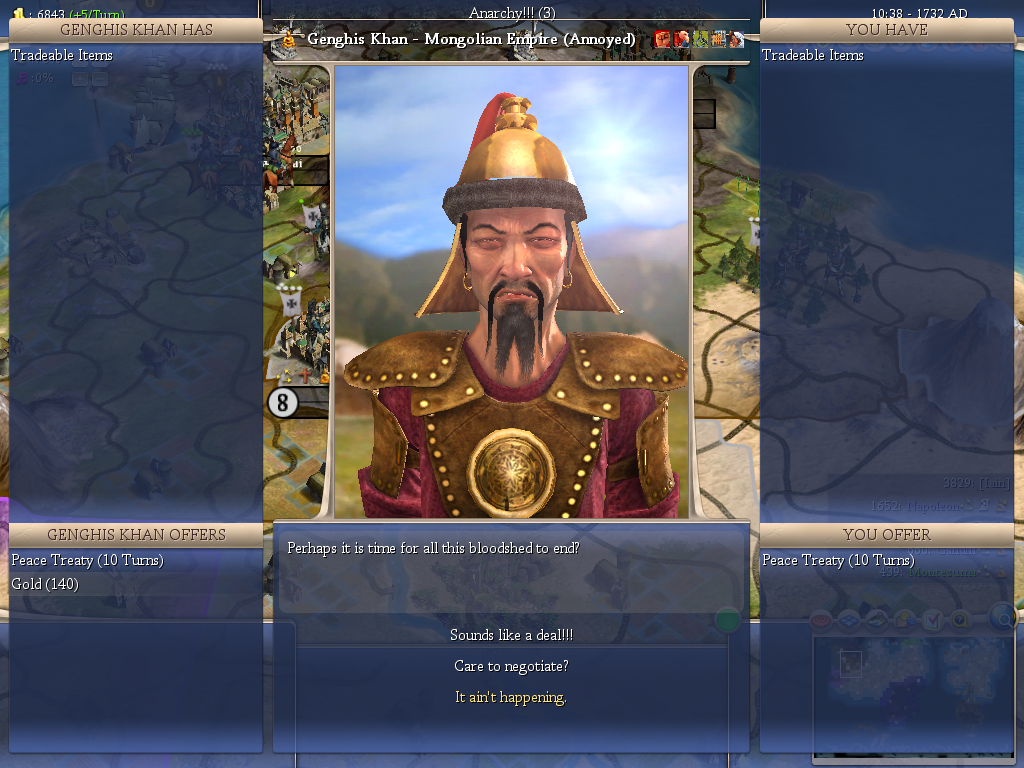 In response, Genghis detaches a suicide squad of musketmen who slay Peter Tork before he can get through the gates of New Sarai to rest. To lose one Monkee may be regarded as a misfortune. To lose two Monkees looks like carelessness. The musketmen are swiftly dealt with. 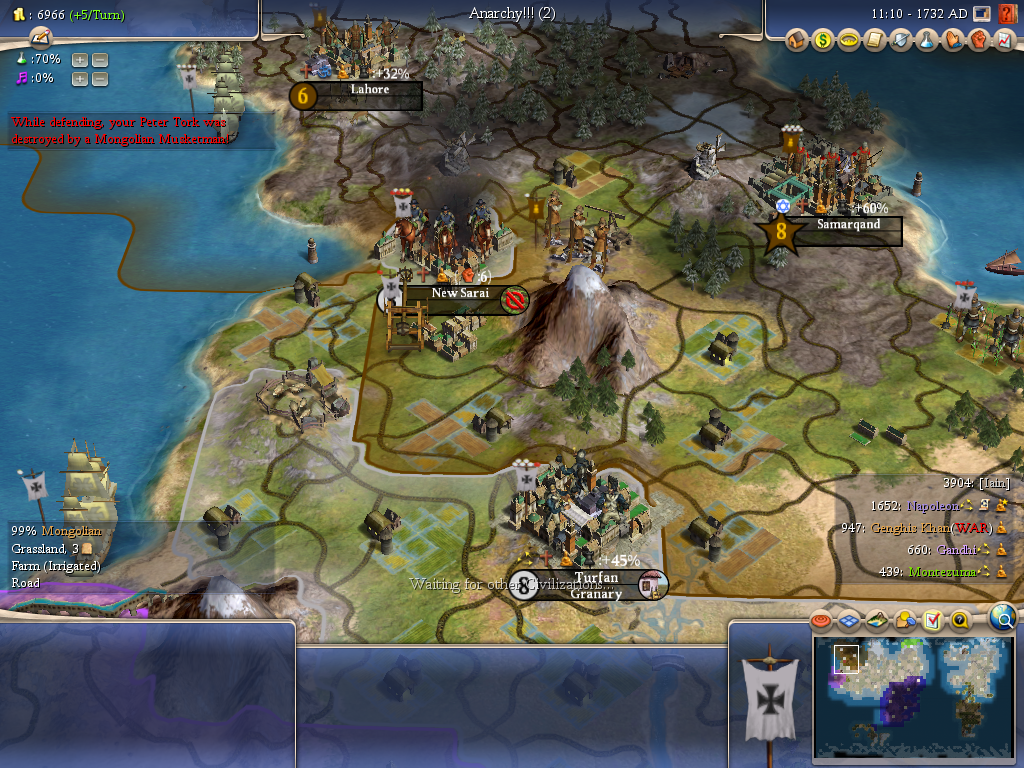 With the navy pounding the city of Lahore, I believe I can take it with just four cavalry units. Another six are dispatched to Samarqand, the final stronghold, along with every catapult I have left. 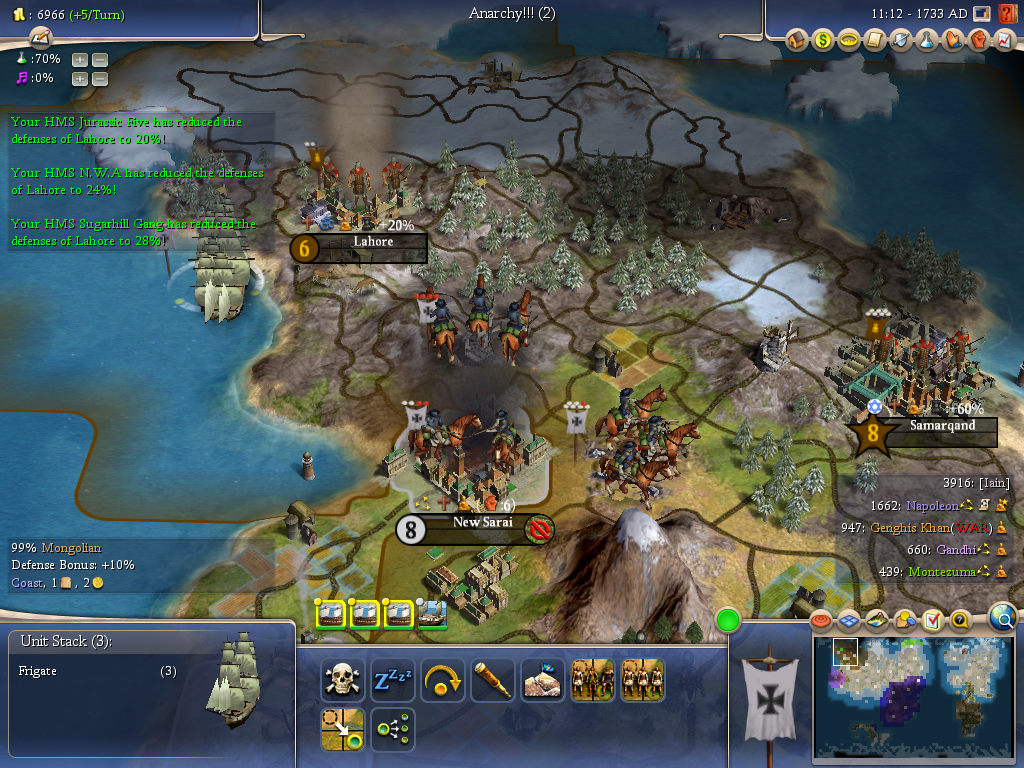 Lahore falls swiftly. Rod Stewart annihilates their pikemen before David Bowie comes in to finish the job as he has done so many times over the centuries. 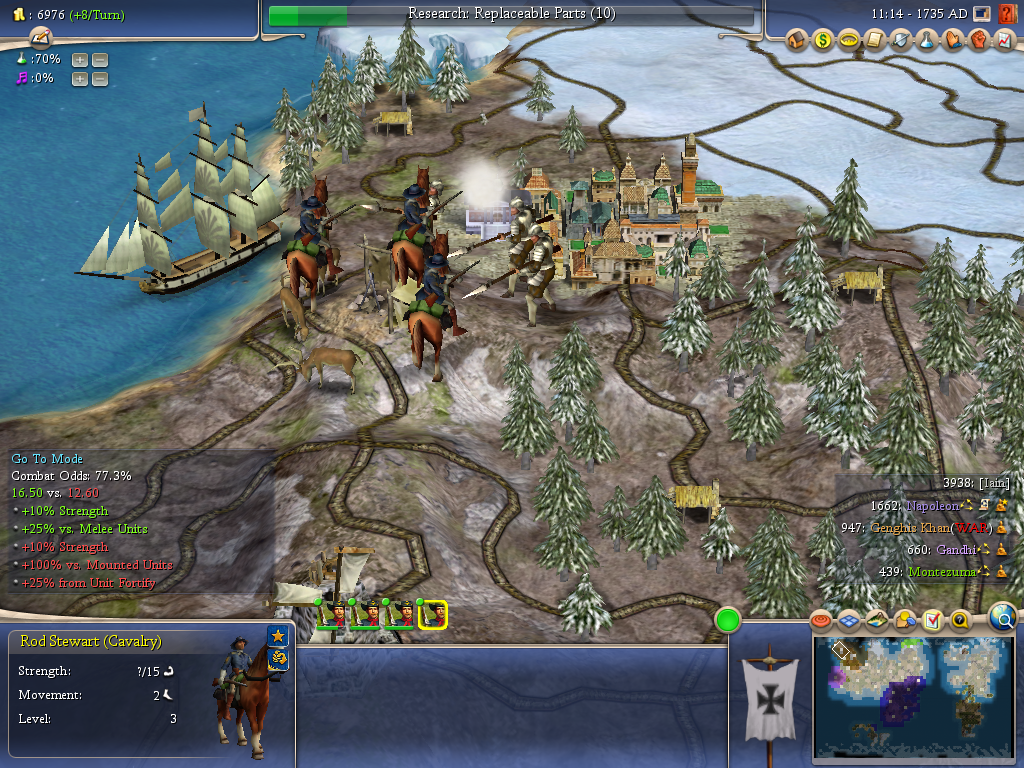 One barrage from our entire collection of catapults reduces Samarqand’s walls to dust. With macemen to the south, grenadiers in the forests and cavalry flooding down from the hills in a glorious torrent of furry death, this battle is a foregone conclusion. Mind you, any battle involving Henry Rollins tends to be a foregone conclusion. 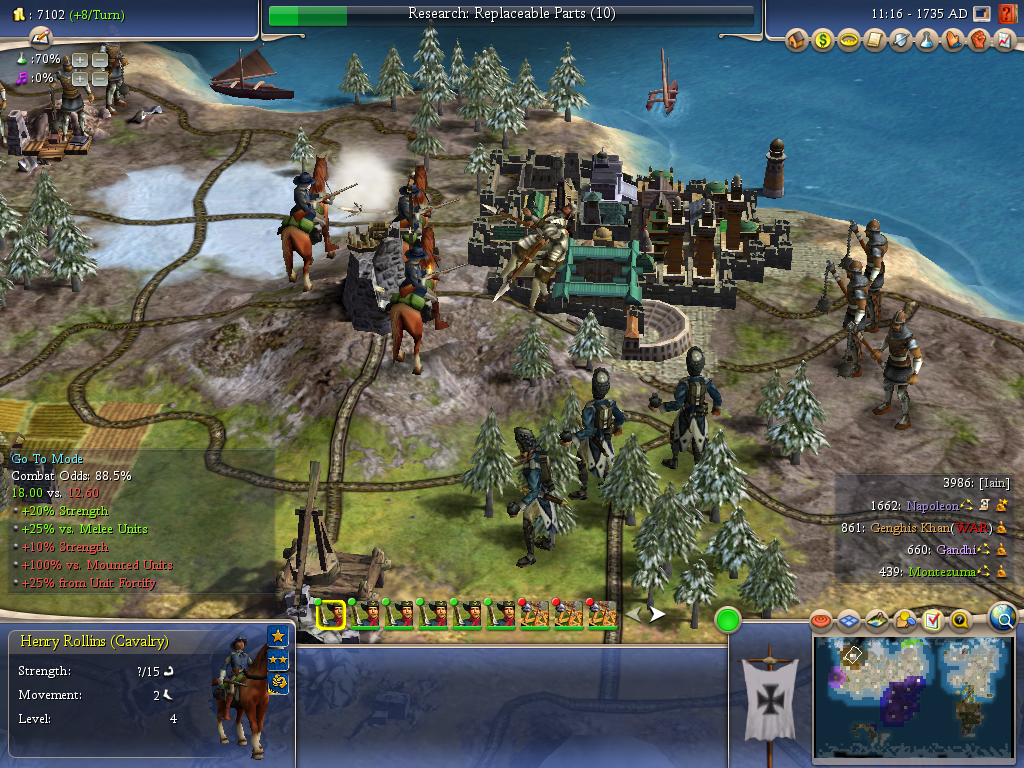 Roy Orbison finishes the job and the last Mongol city on the continent is ours. But the Mongols still live on…somehow. This concerns me. They must have got some settlers off the mainland before the war began. This is proper Nazis-on-the-moon stuff. I dispatch my Navy to scour the globe. I *will* find him. Almost certainly on that southern continent in the New World that I chose not to colonise. 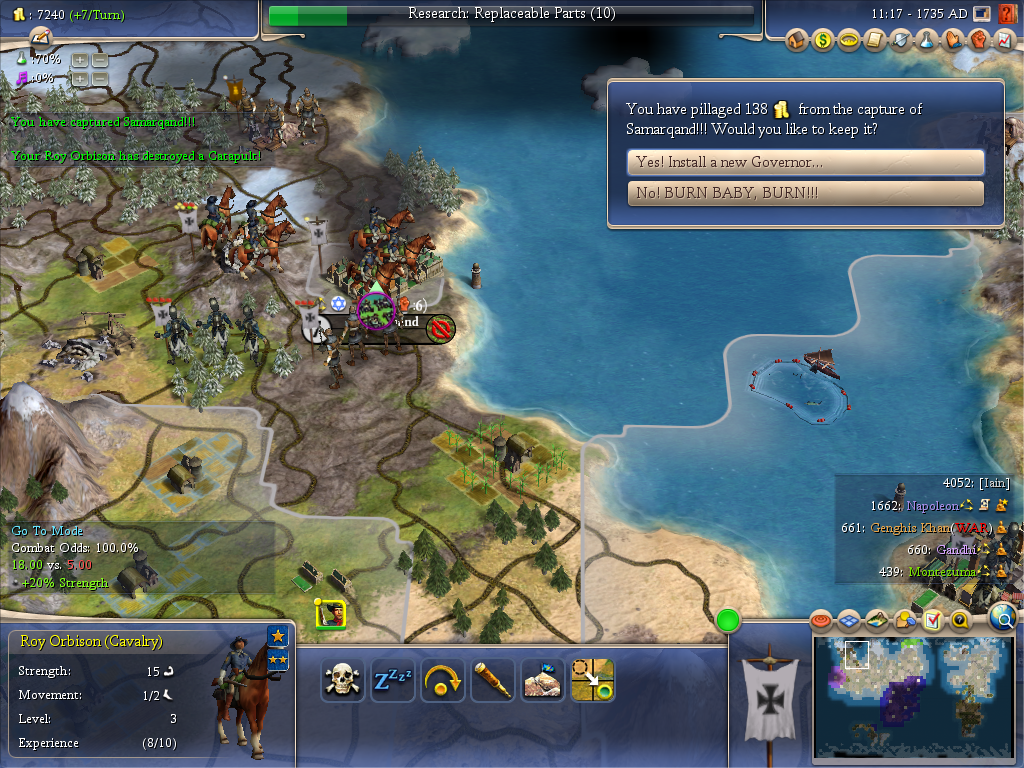 And so this is where we stand in the year of our many Gods, 1735. Soon, I will consolidate my plunder and rename my new cities. I’m going to spare you the hour or so it will take to re-organise and re-deploy my forces. I have graciously allowed Gandhi to continue to exist in the west of my lands. It’s the least I can do. Had I protected him, all those years ago, he’d have a flourishing nation by now. 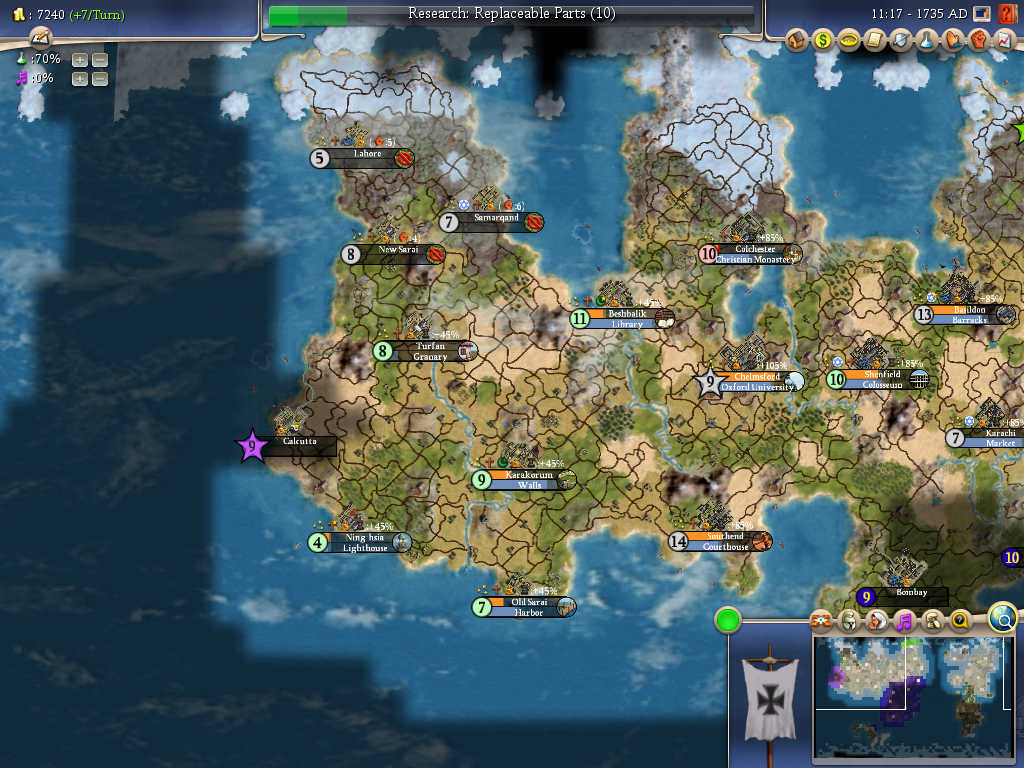 In the east, it’s all about protecting myself from Napoleon now. When I finish developing replaceable parts, I can spend my treasury upgrading every unit to the far superior riflemen. Then I’ll decide what to do with those Aztec dogs in the north. And, of course, I’ll consider what to do with the French. 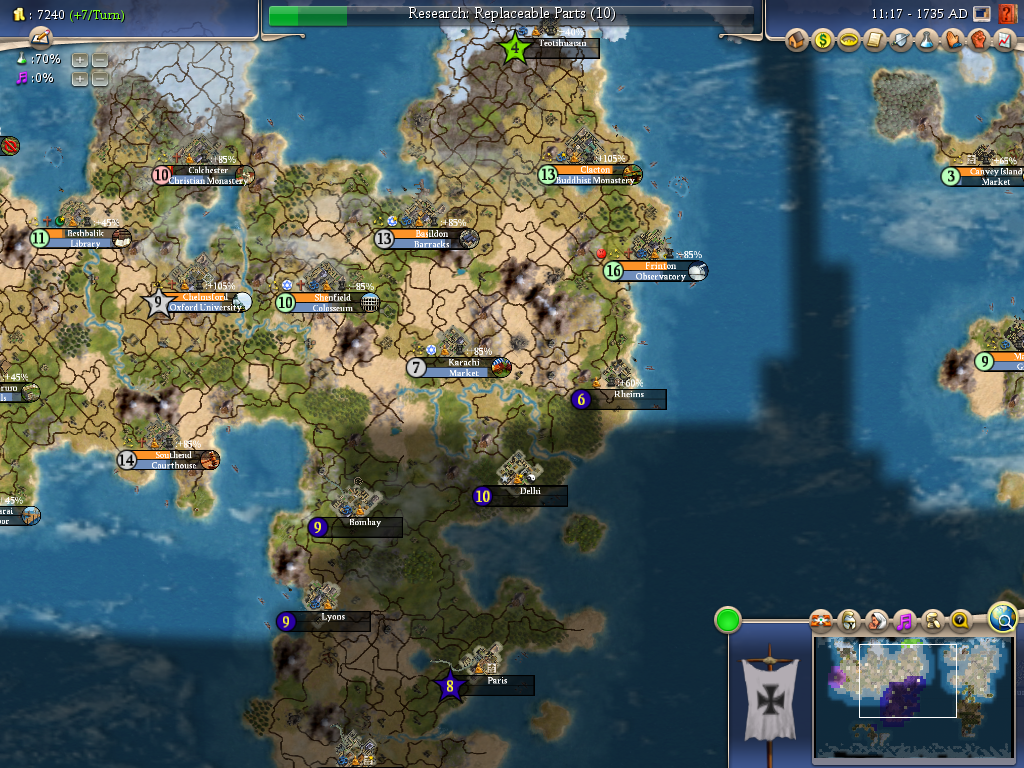 In the new world, we are prosperous and safe. War is something you read about in the newspapers. But that may not last. Somewhere, south of Tunbridge Wells, something awful lurks. A furious, vengeful Genghis Khan, intent on extracting reparations of blood from my people. And I can’t say that I blame him. 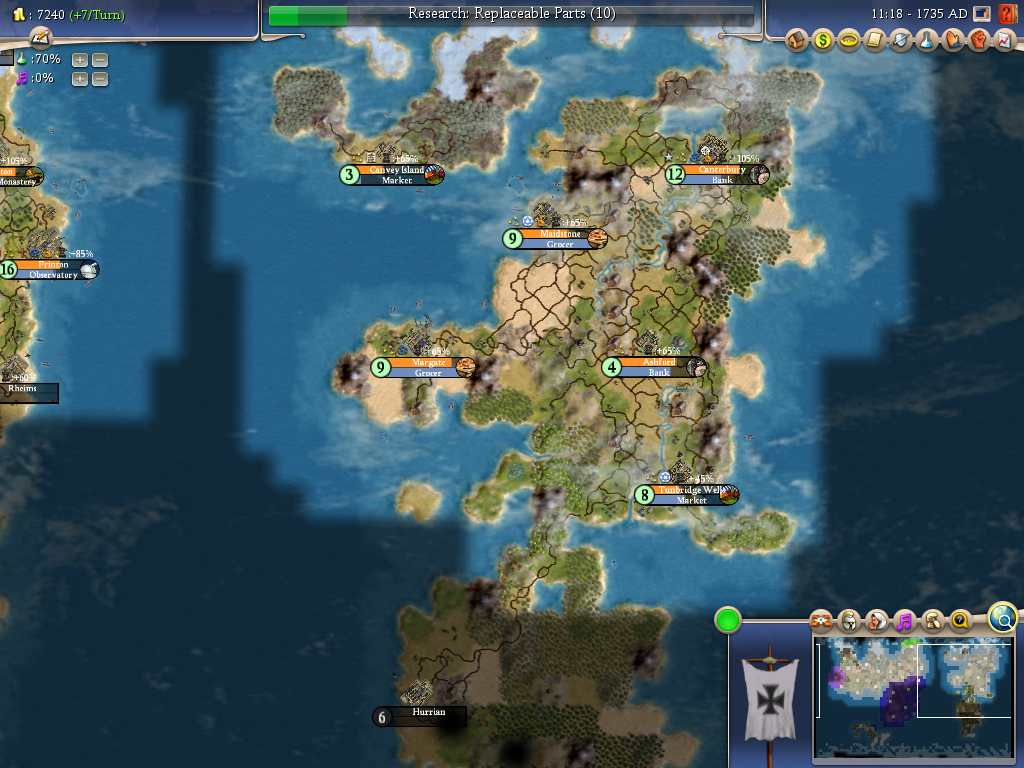