Can a man who failed so miserably with Everton perform any better when bestowed with immortality and granted complete control of an ancient society of hunter-gatherers? Will he win the space race or will his unexpectedly enthusiastic conversion to the principles of combined arms end this affair long before the invention of electricity? Find out now in the series that’s last far longer than anyone expected.

Episode 1 (Birth of a Nation); Episode 2 (The Race for Copper); Episode 3 (Love Me Tender, Love Me Dead); Episode 4 (The Hills Are Alive With The Sound of Screaming); Episode 5 (He Would Do Anything For Chelmsford. Including *That*); Episode 6 (On My Signal, Unleash Montserrat Caballe); Episode 7 (War Is Over. If You Want It…); Episode 8 (Behold, The Hanging Gardens of Chelmsford); Episode 9 (Hans? Are We The Baddies?); Episode 10 (The Essex Superstate Takes Shape); Episode 11 (You Cannot Kill Keith Richards); Episode 12 (I Still See Gandhi’s Face At Night When I Close My Eyes); Episode 13 (For Some Reason, The Natives Resent Colonialism); Episode 14 (Lemmy Crushes The Resistance); Episode 15 (Soon I Will Be Invincible) ; Episode 16 (You Should Not Have Lent Me That Napoleon Biography); Episode 17 (Buster Bloodvessel’s Blitzkrieg)

In one brutal, three-pronged assault, the border cities of the Mongol lands have fallen.

Beshbalik, Old Sarai and the capital of Karakorum are all under Essex control. And now that they are secure, our armies continue to press on. Attack Group 1 heads north to Samarquand, Attack Group 2 to Turfan and Attack Group 3 goes west to Ning-hsia. All of them leave one maceman to garrison the cities behind them, upgraded immediately to the far more powerful grenadiers.

One rebel group of Mongol musketmen is hiding out in the forests to the east of Karakorum, but they are contained by our reserve forces. They should present no serious danger. 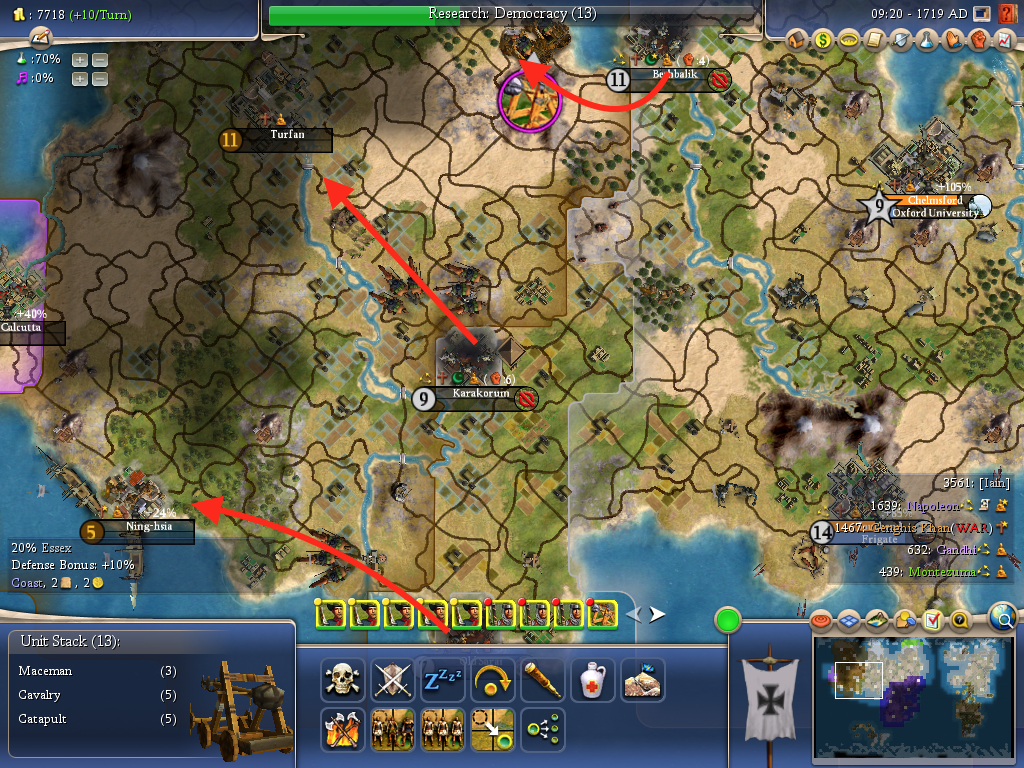 Unfortunately, Genghis Khan has had time to marshal his forces. And he’s quite good at that. Samarquand is now guarded by two catapults, which puts Attack Group 1 at serious risk of bombardment.

They have given up one unit to the defence of Beshbalik and are still not at full strength after the battle. It seems far wiser to divert them to Turfan for now. They will lend their support to Attack Group 2, while remaining close enough to guard the road to Beshbalik. 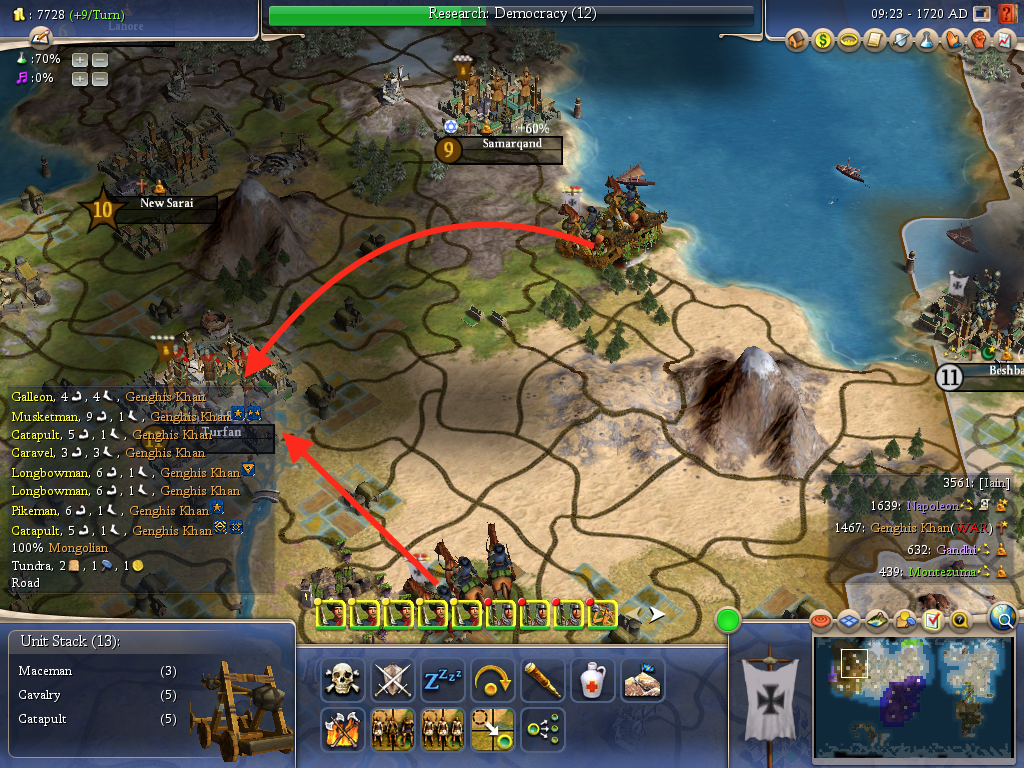 In the meantime, Attack Group 3 closes on Ning-hsia, a city with no defensive walls after a sustained naval bombardment by the Sugarhill Gang and Public Enemy. With their work complete, I send them north to soften up New Sarai. 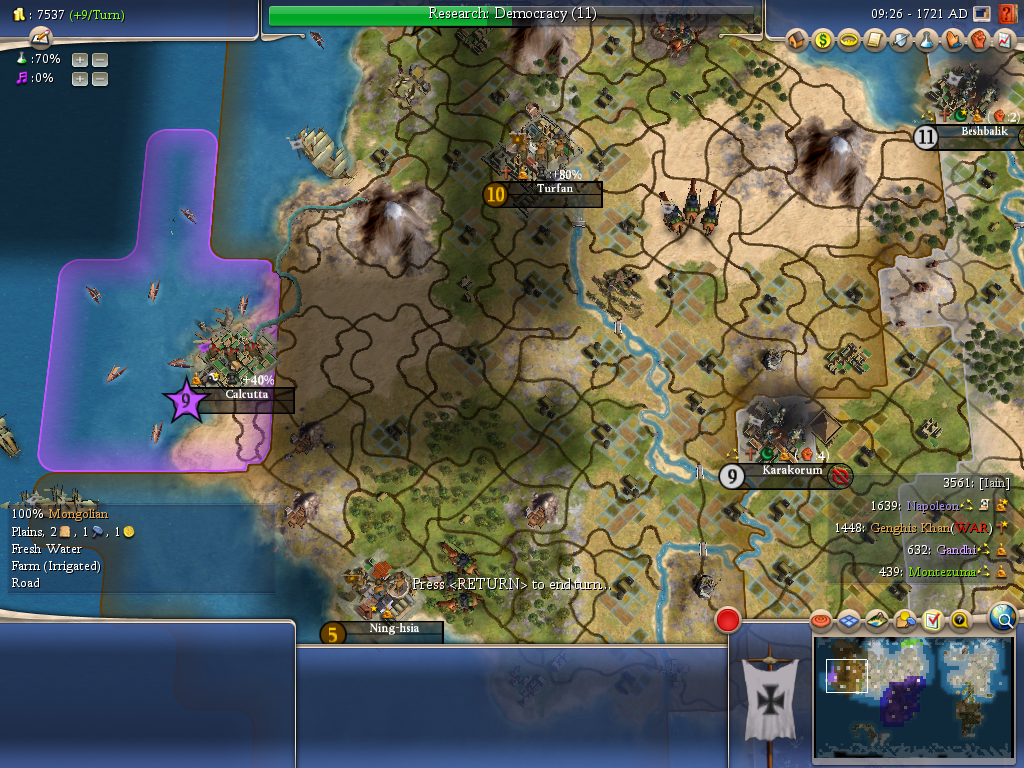 In 1722, the assault on Ning-hsia begins. With their defences turned to rubble by the navy, Mike Nesmith moves in to blast the defending forces. 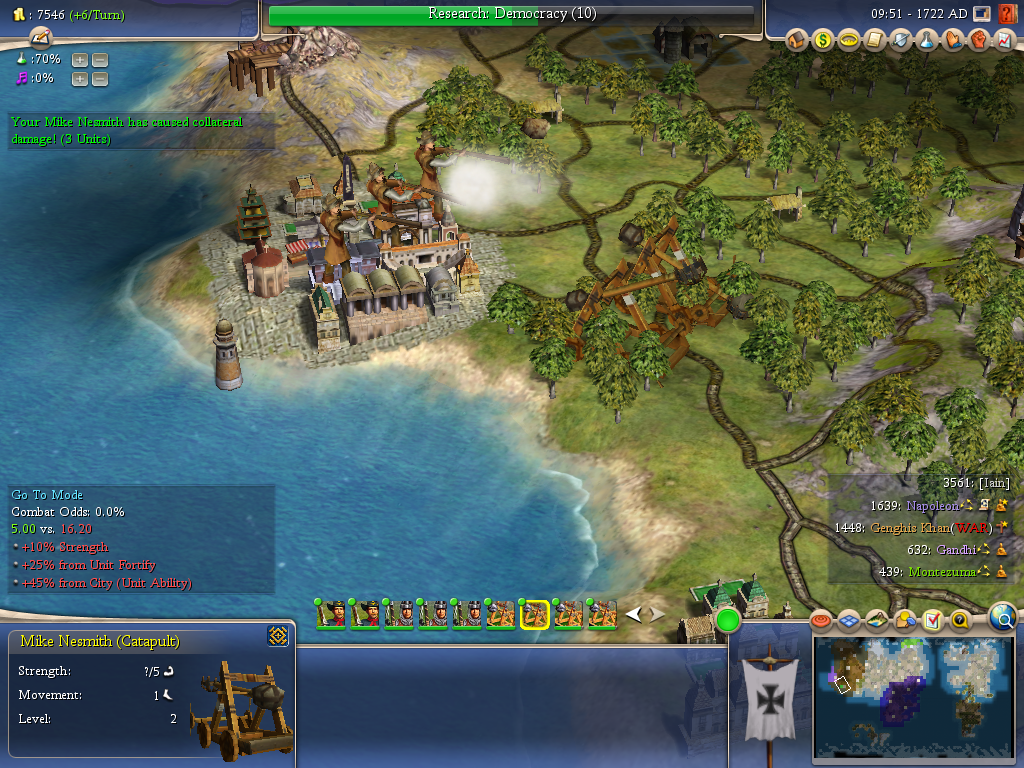 But while history’s most unlikely Monkee causes considerable damage, the Mongols aren’t so weakened that they can’t fight back. We lose Neil Sedaka to the sharpened pikes of their armies. Oh, Neil. 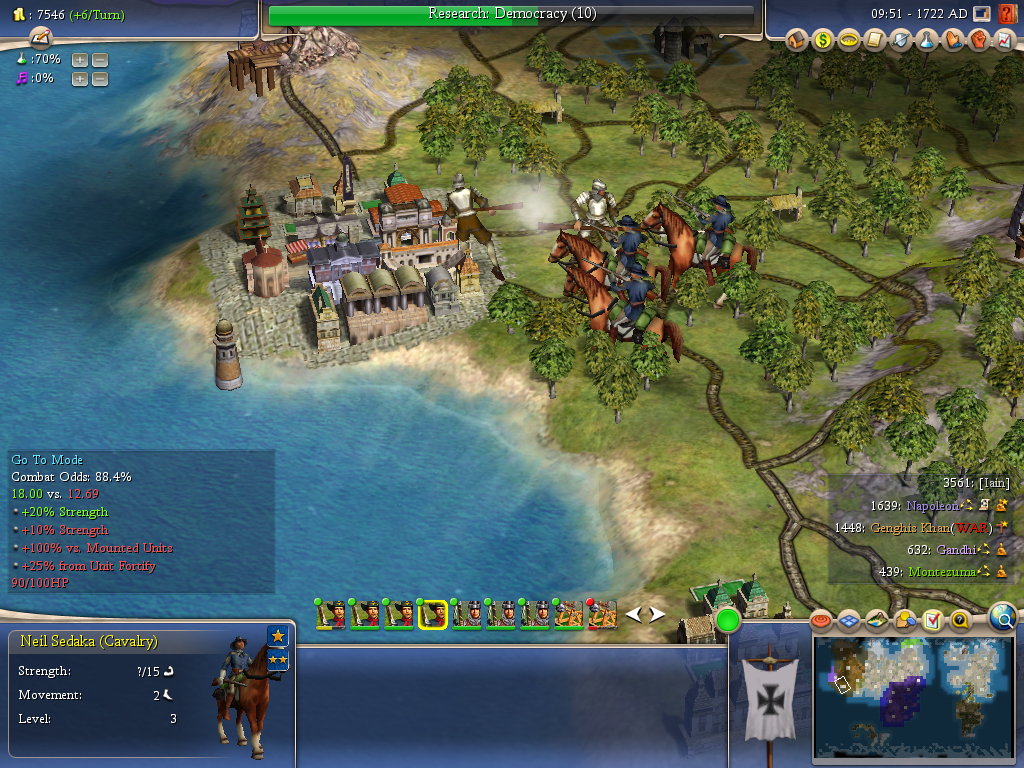 Eager to avenge the death of Sedaka, the rest of Attack Group 3 pile in and take the city. We have taken the south. Now we consolidate and then focus our efforts on subduing the north. I will allow India to live on as a puppet state, in thrall to my majesty and my power. Because I am nice like that. 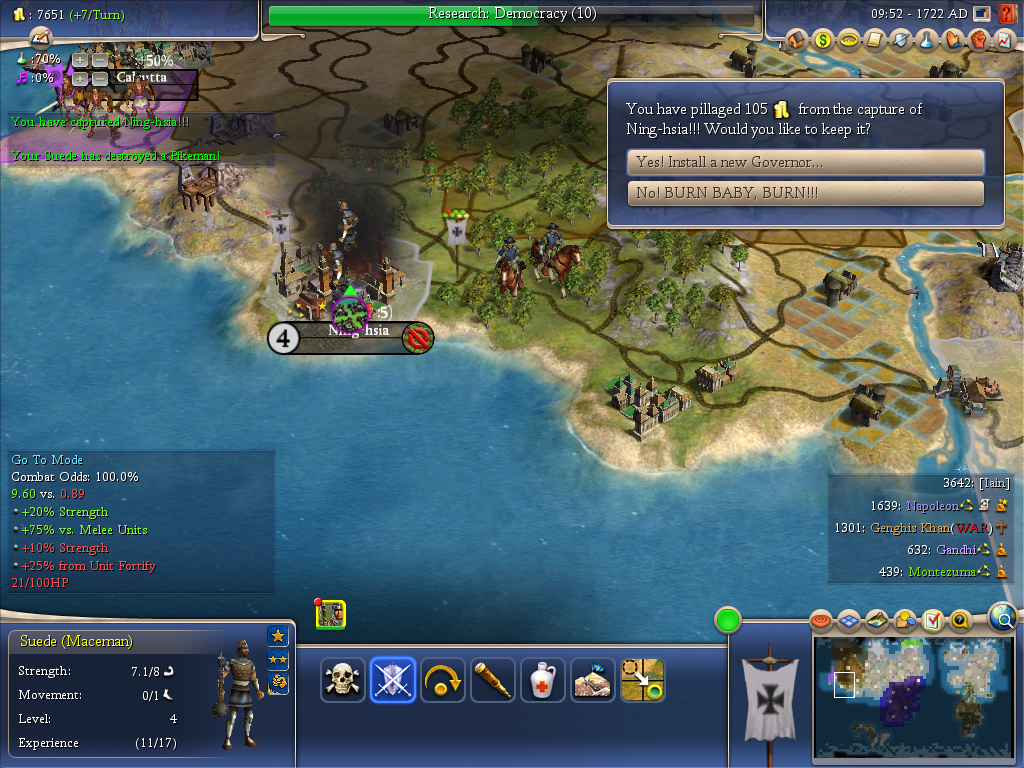 You have to admire Genghis. He will not give this up. Two musketmen units scamper out of Samarqand and make for Beshbalik. I am very glad that I chose to closely monitor that road. 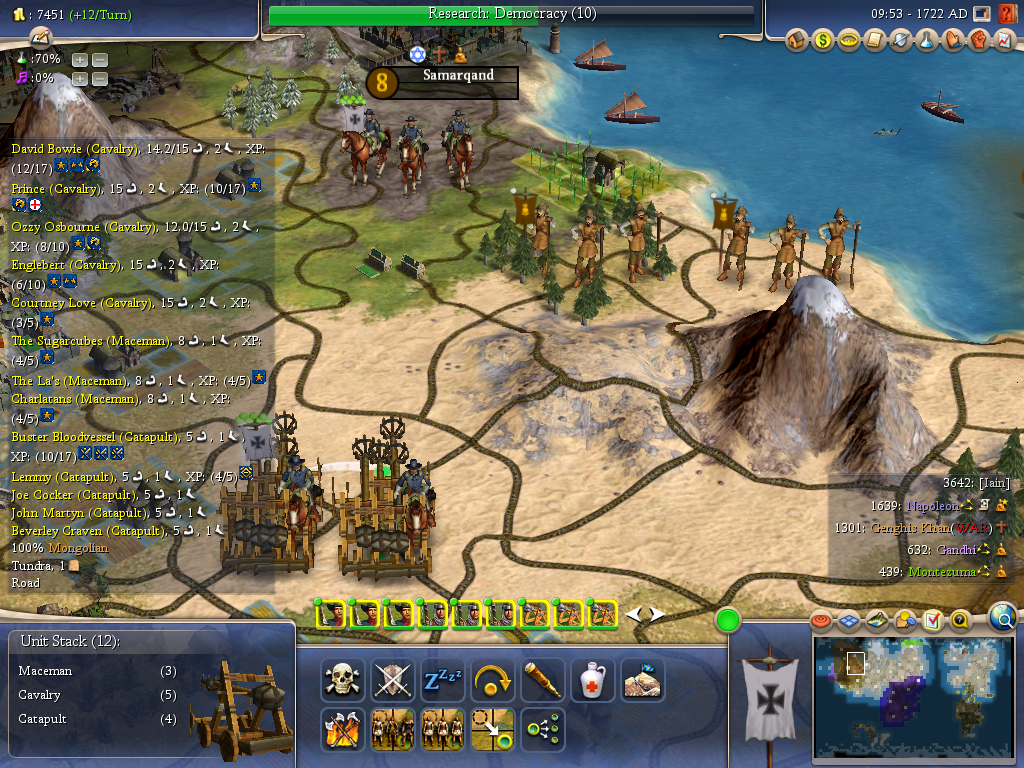 Our cavalry units intercept and Courtney Love boldly charges into the forests to wipe out the last unit. It’s good that we’ve quashed that little uprising, but it does mean that our troops are tired and way below strength. We won’t be able to push on yet. 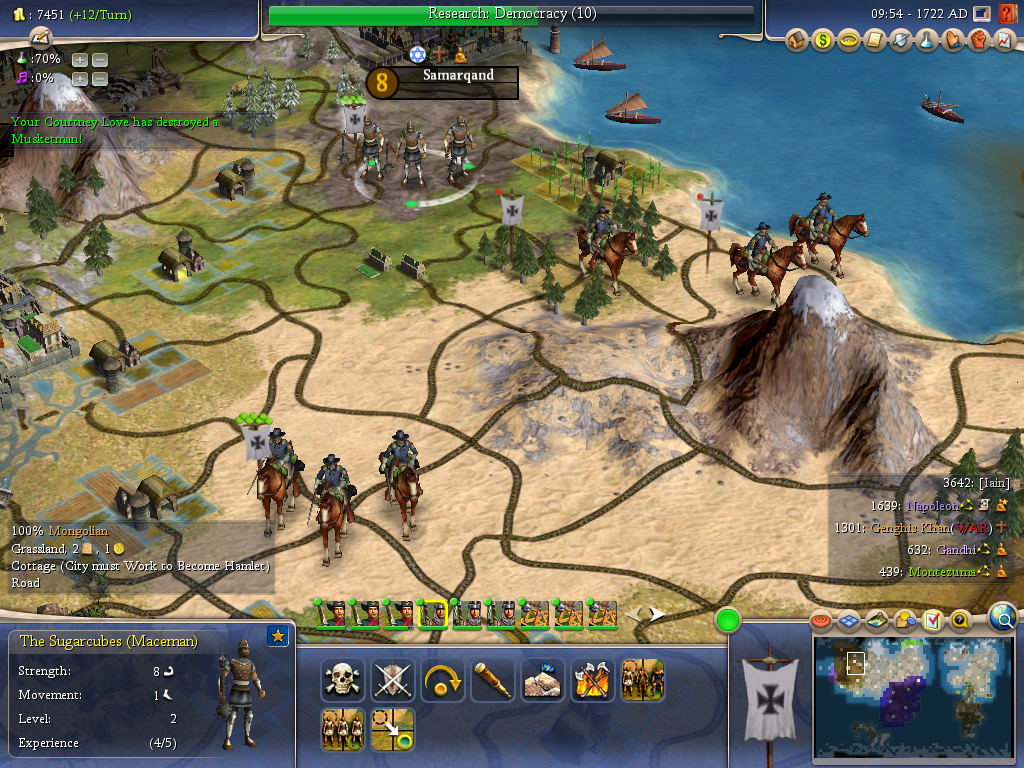 Back in Essex, that lone group of rebel musketmen makes a bold charge into our territory. They are veterans, well trained and highly motivated. They are more of a threat than I anticipated. We eventually wipe them out, but not before losing Goldfrapp in the battle. 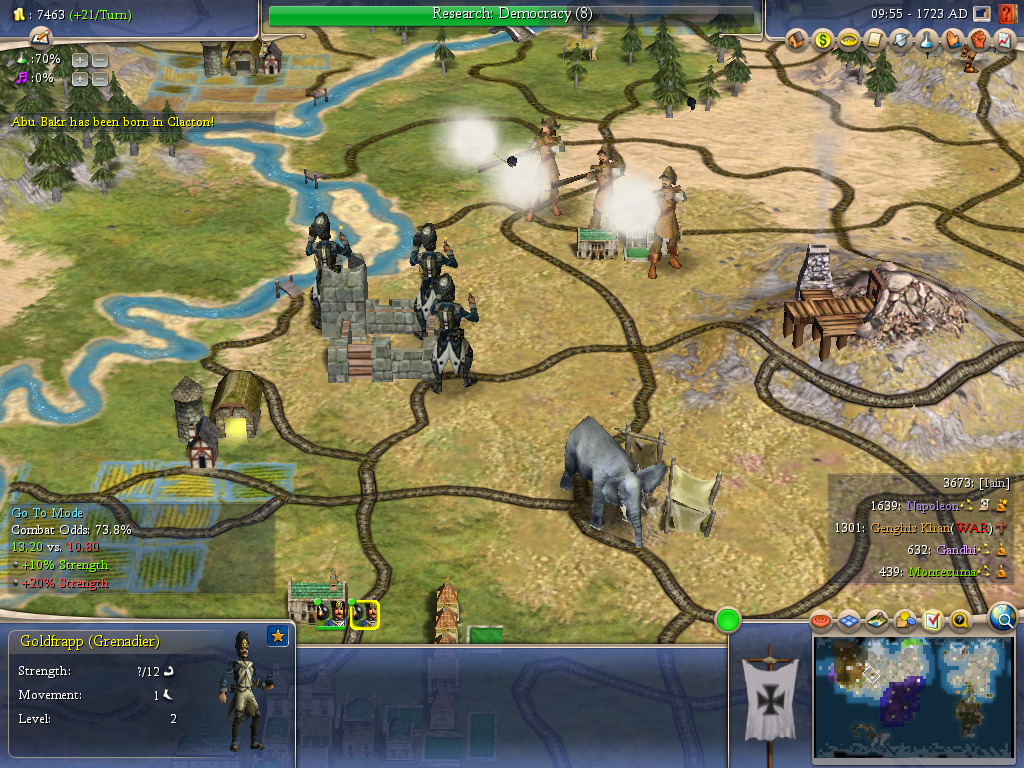 And so with Attack Group 1 weakened and Attack Group 3 holding position in the south, all eyes turn to Attack Group 2 and the attack on Turfan. First we have to bring down the walls. And that honour falls to Barry and Maurice Gibb. 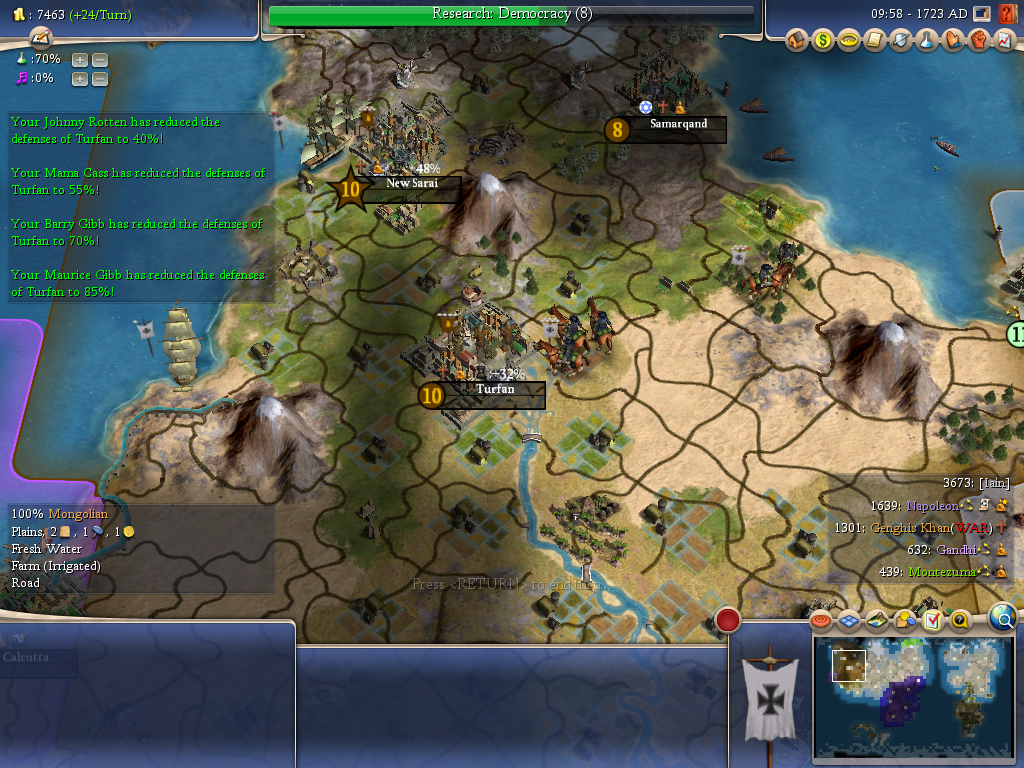 Once again, the attack is not easy. We lose Johnny Rotten and Alice Cooper before we gain the upper hand. But Roy Orbison rode all night to wage war on you. He’s not going to let the death of two of his friends slow him down. 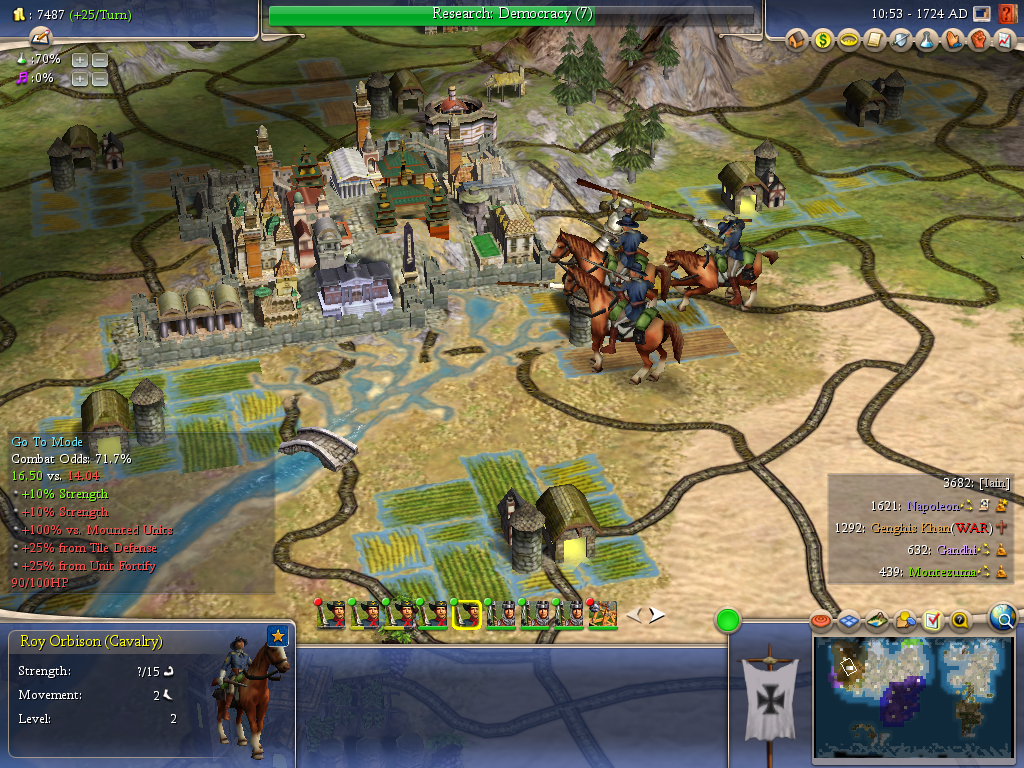 It’s Menswear who strike the fatal blow, obliterating a unit of catapults and then raising our flag above the smoking streets. We have Turfan. We have the bulk of the mainland. But the Mongol is still strong in the north. We must rest up now and lick our wounds. We’ve lost six land units and a galleon in this war. I’m going to need reorganise before our final push.

This isn’t over yet. 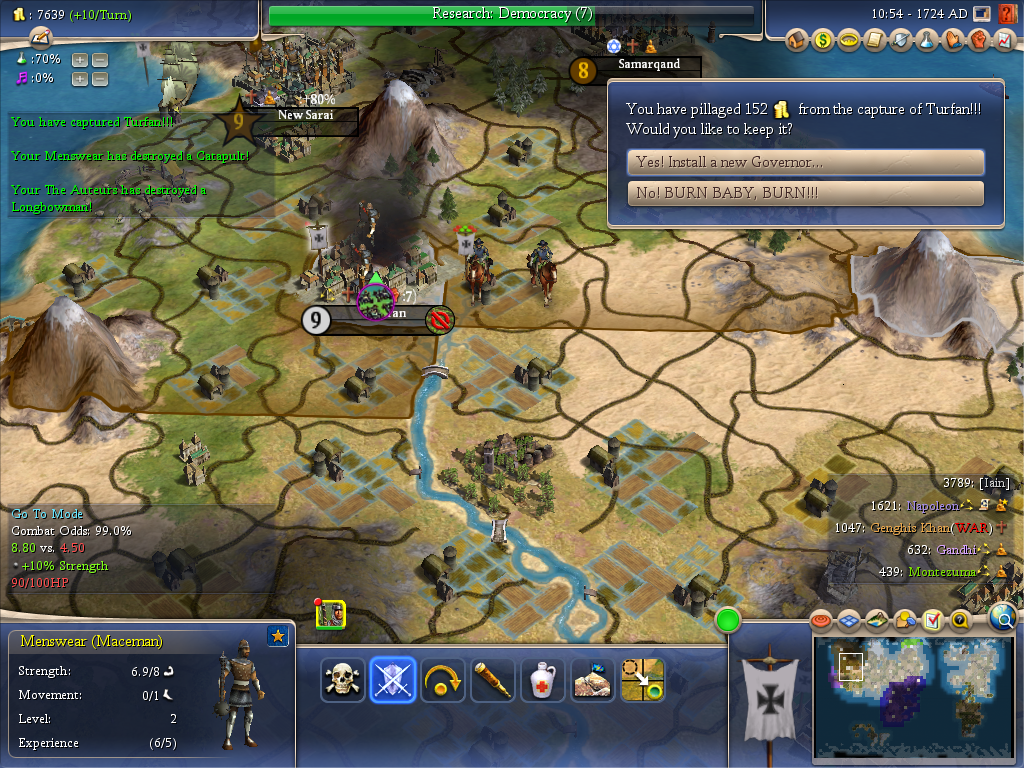