So it’s simple then. If we avoid losing at home to Manchester City on Wednesday and we beat Manchester United at home on Saturday, we’ll be in the Champions League final and one win away at West Bromwich Albion from the Premier League title. That’s easy enough, isn’t it?

No, it’s not. Because matches never sit in isolation. If we slip up against City, we’ll be crestfallen for United and we’ll probably lose both. If we do that, we’ll end the season empty-handed, which would be incredibly harsh all things considered. So, essentially, what we need to do is beat City and beat United and probably beat West Bromwich Albion on the last day of the season too.

Oh, and United aren’t in Europe, so they’ll be fresher. Brilliant. Obviously, we’ll kick off against City in the Klopp Protocol. There’s no point inviting them on with 90 minutes of Castle Protocol. I’ll go with my favoured defensive pairing of Laurent Koscielny and Virgil van Dijk. The rest of the team picks itself. I drop the whole lot of them a little deeper to guard against counter-attacks. We won 2-1 at the Etihad, I would happily take a 0-0 here.

So then, my beautiful boys…in the words of St Francis of Assisi, get out there and don’t come back if you fuck it up. 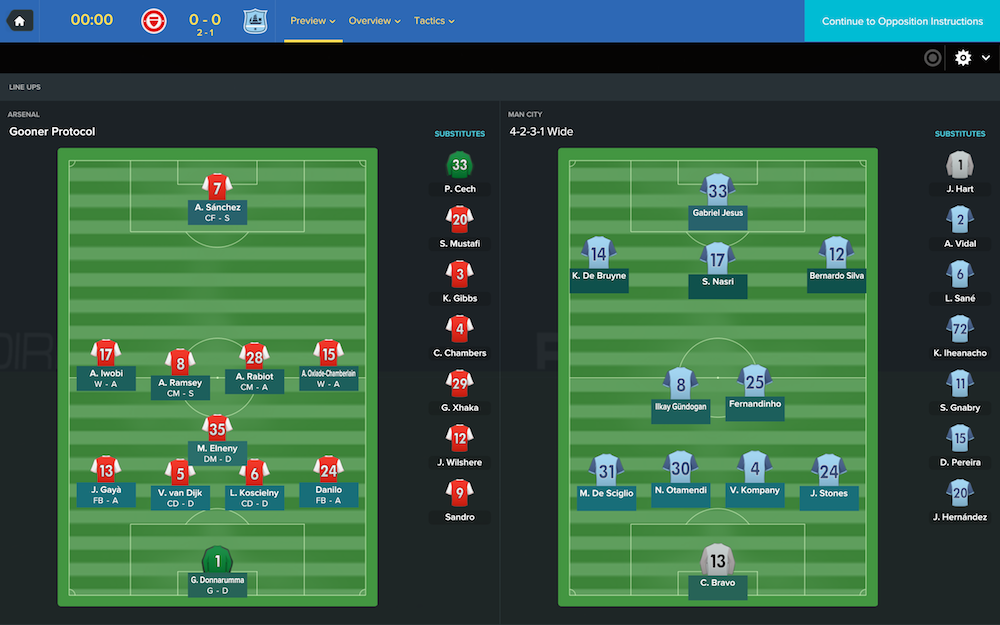 Competence. That’s all I’ve ever asked for. This game is so punishing that when you’ve been soundly whipped a few times, as I have, you care less about winning and more about just surviving. You just want to be able have a shape, have some players and know that you haven’t got it so horribly wrong that you’ll be four down at half time. And if this past year of very public Football Manager failure has taught me anything, it’s how to do exactly that.

City offer nothing. They offer nothing because there’s no room to offer anything. We let them have the ball, but we don’t let them put it on target even once all night long. In the 13th minute, Danilo scampers up the right flank and, good God in heaven above, plays a low cross that is tucked away by Alexis Sanchez. They’ve got it. By Jove, they’ve got it.

We lose Aaron Ramsey to injury eight minutes later, which is a blow, but Granit Xhaka comes on and we never lose our way. After 60 minutes, I switch to Castle Protocol and after 70 I’m able to withdraw Sanchez and Adrien Rabiot to keep them fresh for United. We are cool, we are collected and we see the game off without any late shocks.

In short, we are nothing like Arsenal. Take note, Barcelona. 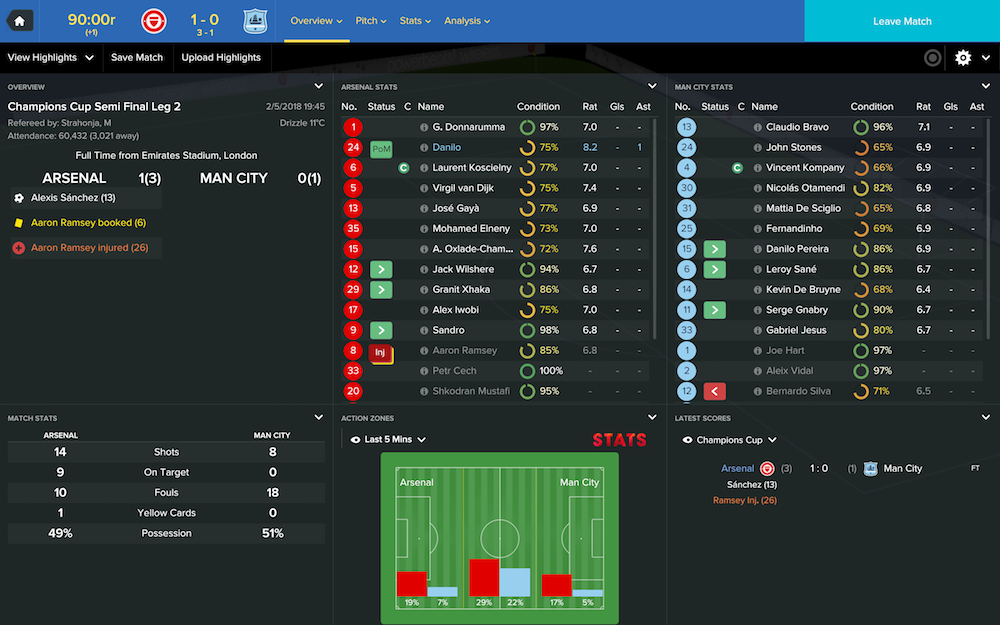 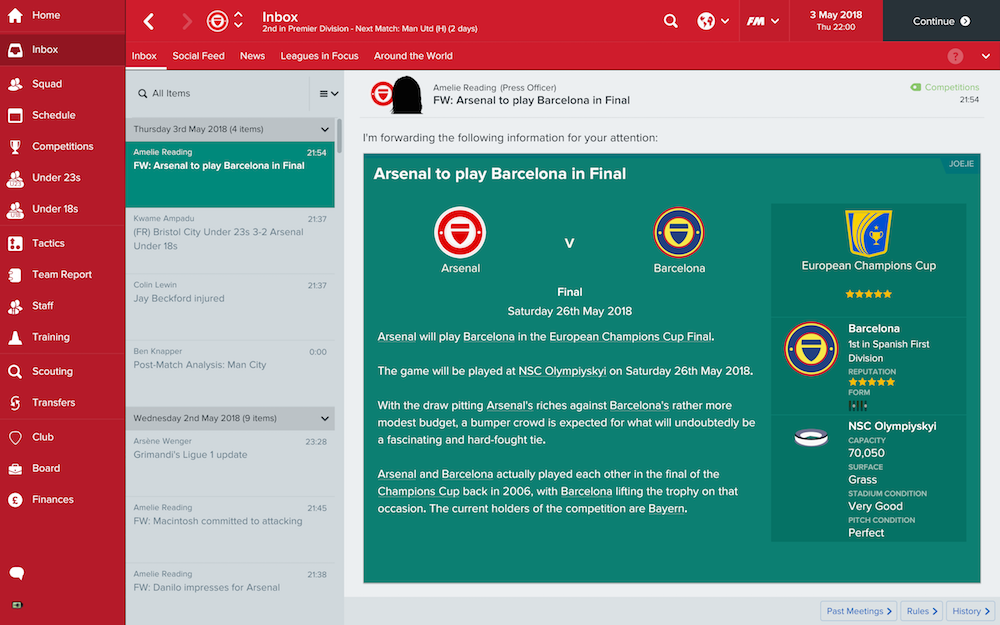 And so to the title. United are two points clear. I need this. I give the players a day off in the hope that they’ll be as fit as possible. Xhaka will continue in place of Ramsey and Andre Gomes will return to the bench. We’ll also make a point of keeping that deeper shape, given that United like a long ball to catch us out. There’s really not much more I can do at this stage apart from empty my bowels, pour a grown-up drink and try not to cry in front of my family. 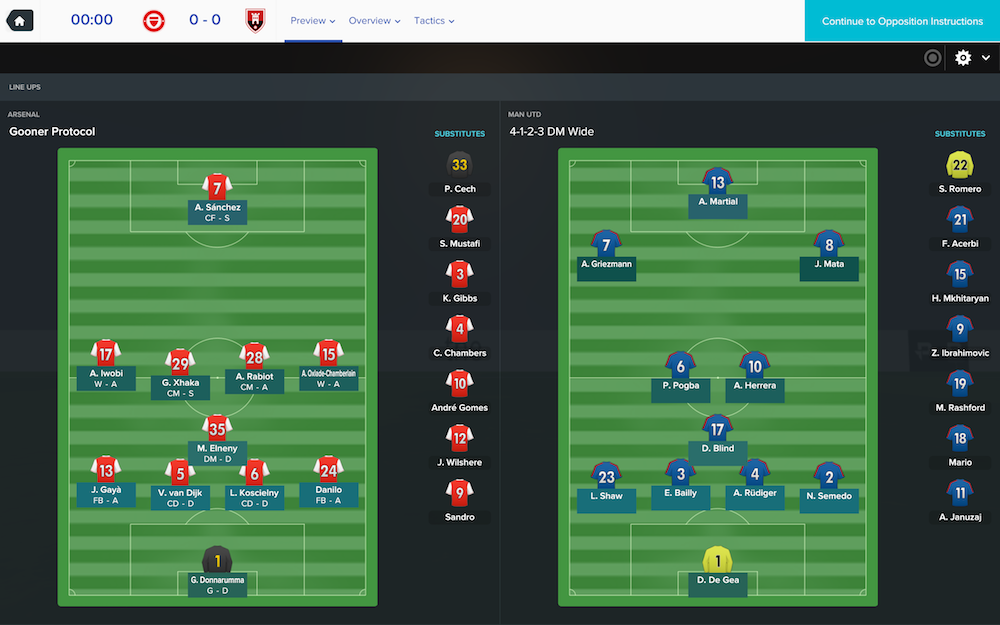 In a game like this, you want a good early start and we get one. Our corner routine, a complicated affair that pushes seven players into advanced positions to occupy their defenders, but directs the ball to the vacant space outside the box where Sanchez lurks alone, pays off again. He drives the ball in from 30 yards. I’m tearing off my shirt in celebration when I notice the linesman’s flag.

Fortunately, Sanchez has another chance, from a free-kick this time, shortly afterwards and he does exactly the same. This one isn’t ruled out. We lead. Now we have to keep that lead. 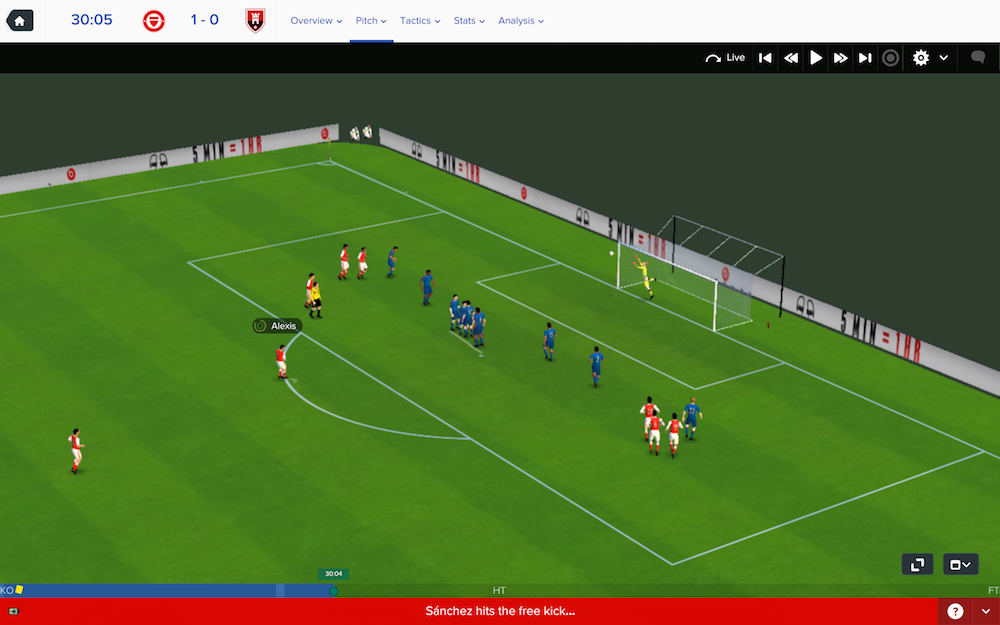 We do not keep that lead. Four minutes before the break, Juan Mata unlocks our defence and Anthony Martial equalises. I try to keep my head attached at half time and simply remind the lads that we owe United for what they did to us earlier in the season.

Obviously, United try to repeat the trick. They start to shut us down, dropping deep and ending our encouraging run of counter-attacks. I know that Mourinho wants me to switch to all out attack so that he can pick me off at leisure, so I resist the temptation for as long as I can. But with 20 minutes to go, there’s no option but to go for it. A draw is no good to us. I’d rather risk everything now than go into the last day having to rely on someone else.

I switch to the more ambitious Klopp Protocol, removing Mohamed Elneny and putting Sandro up top with Sanchez. Then I take out both Rabiot and Xhaka as well, hoping that a fresh midfield two will cover as much space as a tiring midfield three.

With ten minutes to go, the switch pays dividends. A United attack breaks down and when the ball is played forward, it’s four against three. Sandro drifts out to the left, beats a man in the box and lays it back low for Sanchez. But his shot, hard and accurate, is slapped away by the supernatural David de Gea. It’s an incredible save and my heart sinks.

There is only one thing left that I can do. It’s unwise, unproven and it is highly likely to make the situation much worse. I switch to overload.

United quickly capitalise on the space. They move the ball about with impunity in my own half. But then Adnan Januzaj is caught in possession and Alex Iwobi quickly thumps the ball up field. Alex Oxlade-Chamberlain races onto it with both Sanchez and Sandro clattering into the box. I scream for him to cross the ball hard and low into the box. All season long, I’ve just wanted them to play low crosses, it’s the best way to score. All season long, I’ve begged them to follow orders.

He lofts his pass high into the air. 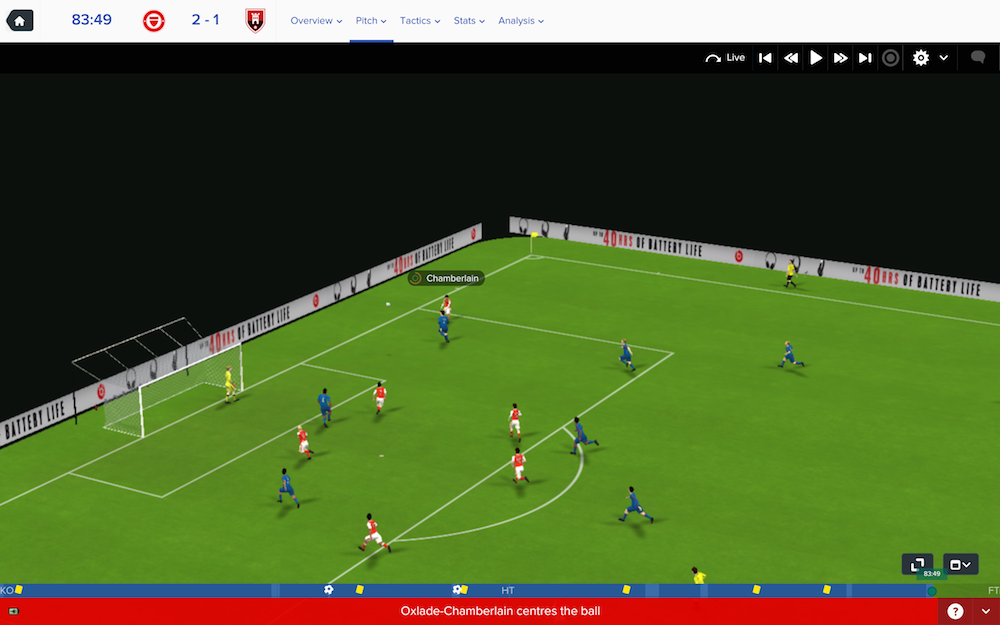 And Sandro somehow flicks his header into the back of the net from a narrow angle. We’re winning. 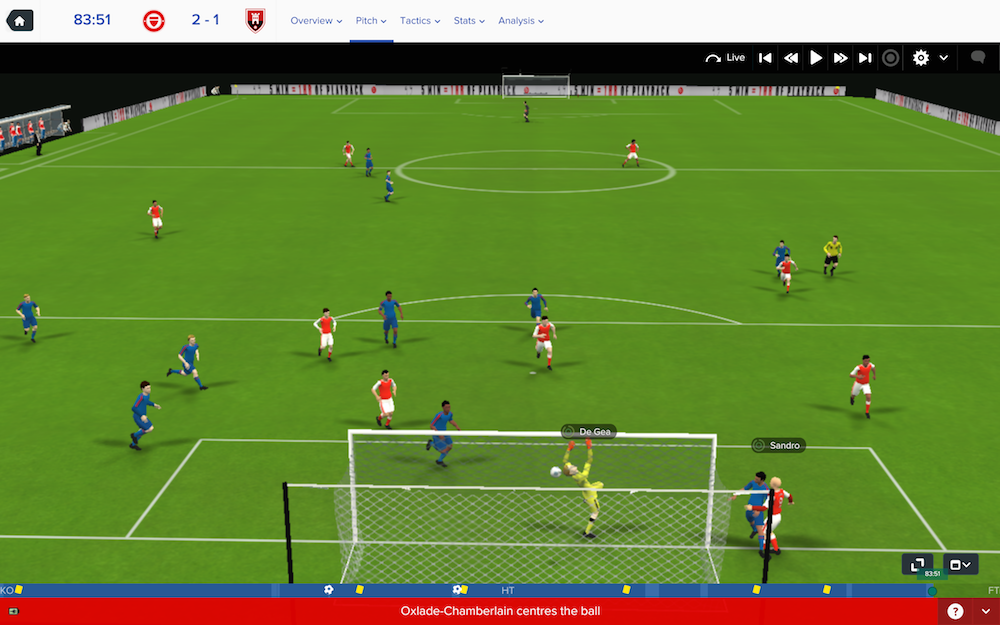 It’s a frantic rush now to Castle Protocol, an ultra-defensive formation designed to ruin football matches. We drop deep, hold our lines and pray. And someone is listening. We’ve done enough and we hold on for victory. With one game left, we are a single point clear at the top. United have to go away to Leicester, I have to go away to West Bromwich Albion. All we have to do is match or better their result. 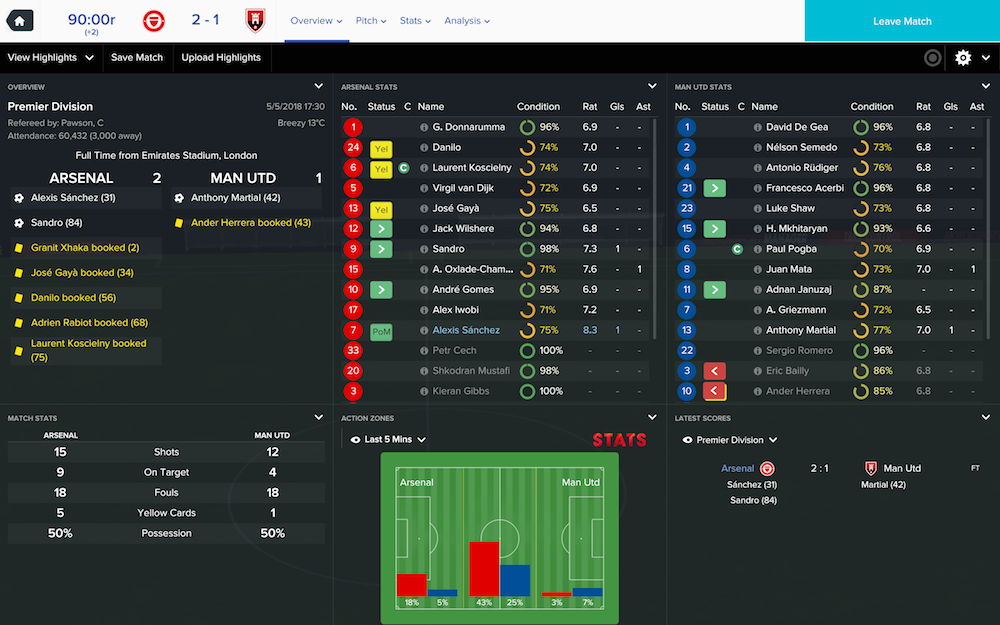 Of course, that’s easier said than done when you’re Arsenal. Even though the Baggies have been relegated, this is basically a long corridor with a freshly polished floor littered with banana skins. And there’s a power cut.

I try to minimise risks. But I can’t guard against everything. Mohamed Elneny is injured three days before the game. Granit Xhaka will replace him and Santi Cazorla will ride again in the centre for one last hurrah. I also have them working on attacking moves for two days before the game so that we have the best possible chance of getting back into it if we go behind. And then I just sit down to watch. Sweating profusely and swearing softly under my breath. 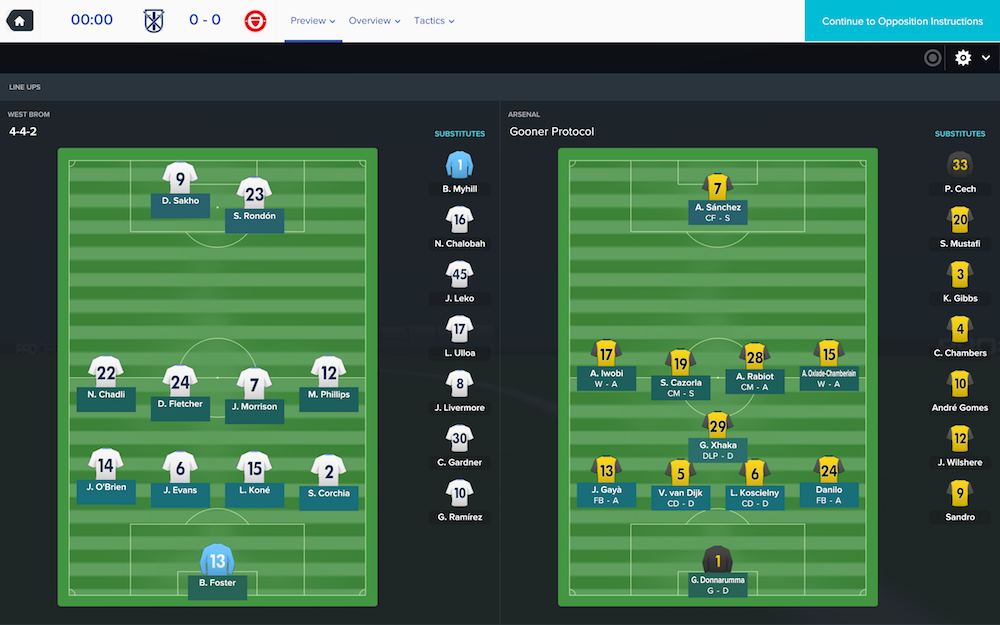 Cazorla’s day lasts just two minutes. He’s cut down by a heavy Darren Fletcher challenge and I have to replace him with Jack Wilshere. Ten minutes later Manchester United take the lead against Leicester. We’re back down to second place.

And then, two minutes before the end of the half, something horrible happens. West Brom score from a corner.

I explode at them at the break. This is not good enough. We switch to the Klopp Protocol and push far higher up the pitch. Within moments of the restart, we’re all over them. Danilo gets clear on the right and shapes to cross with Sanchez open…but then he takes another touch and fires the ball into the side-netting. Ben Foster boots the ball out, the Baggies break and Diafra Sakho heads home Matty Phillips’ cross. 2-0. As I’m staring at the screen in horror, I’m told that United are now two up against Leicester.

I take out Xhaka and replace him with Sandro, switching to two up front. It worked before, I need it to work again. Just before the hour, Sanchez plays in his new strike partner and bang, it’s 1-2. A couple of minutes later, West Brom, who have been relegated and haven’t so much as scored in ages, get another cross in from the right and Sakho makes it 3-1.

And then he gets another to make it 4-1 from the restart.

And then Van Dijk is sent off for a second bookable offence.

That Arsenal will always be inherently fucking Arsenal, the useless, spineless, heartless, gutless pack of fucking rancid c***s. I hate them, I hate this game, I hate the world and fuck you. 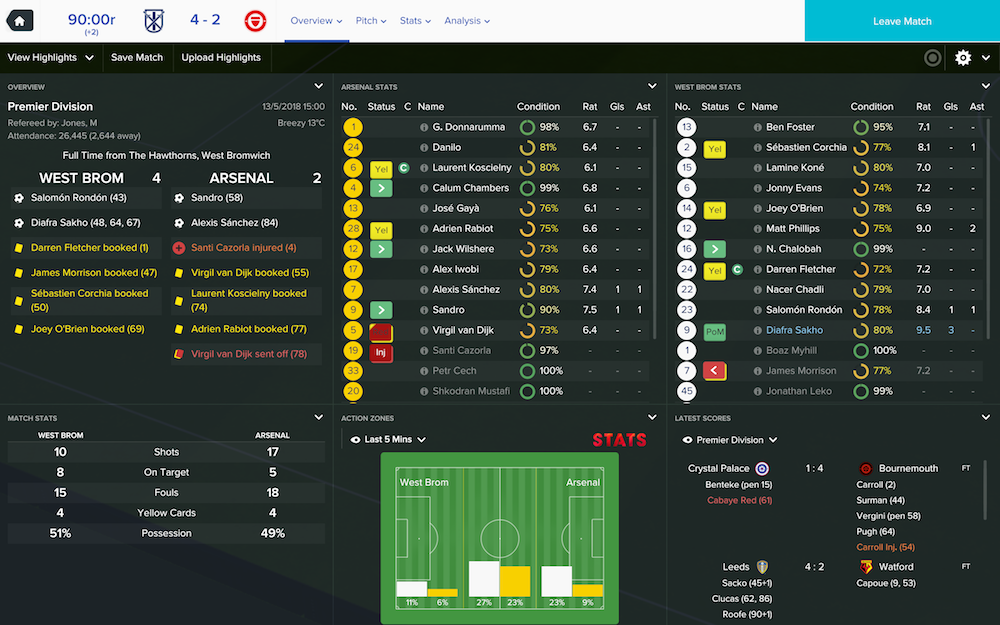 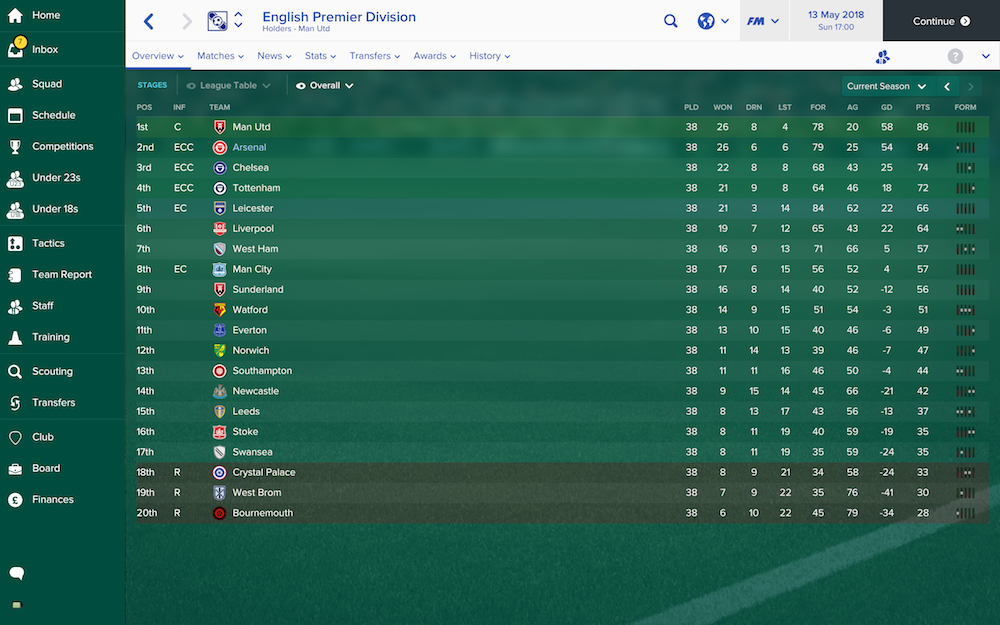