Theo Walcott is done for the rest of the season. The injury he picked at the end of the last episode was far worse than first thought. He is, understandably, devastated. Alex Oxlade-Chamberlain, on the other hand, seems really cheerful for some reason.

I’m not sure what to expect from Newcastle. With Rafa Benitez now at Manchester City, the Magpies have a caretaker manager and so we can’t really do any preparation. What I do know is that we’ve got struggling Stoke at home on Saturday and then the second leg of the League Cup semi-final the following Wednesday. I can’t play the same eleven in every game, so I think I’ll play the strongest side at St James Park and then drop a gear for Stoke. Actually, maybe that’s a bad idea… 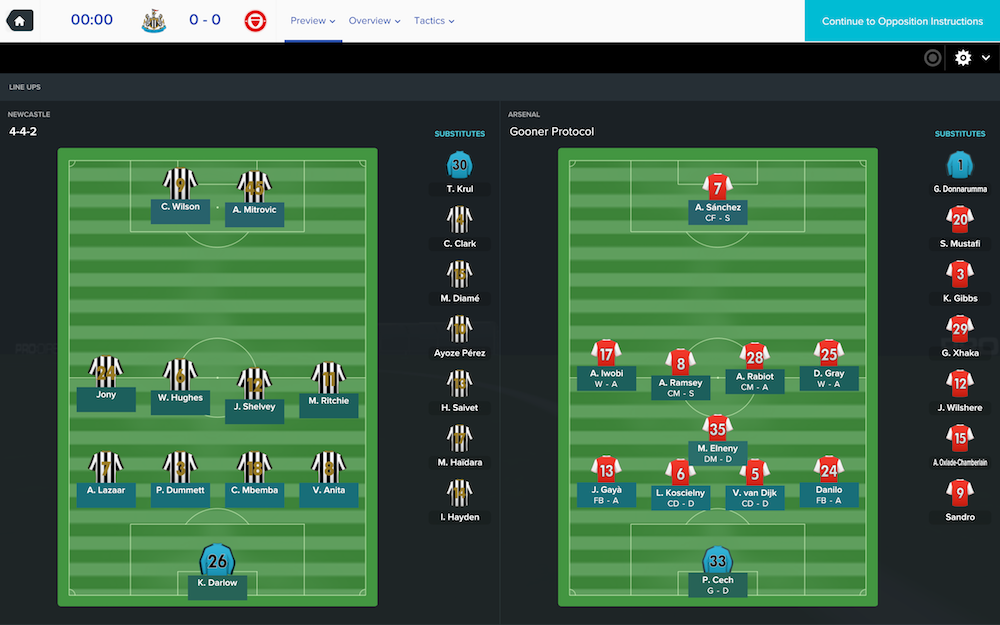 This is one of those strange games where you know that you should have won, but you’re also very aware that you could easily have lost. We make and miss enough chances to win several games, but Alexis Sanchez appears to have entered the field of play in wellies and he can’t get anything on target.

Appropriate changes are made early in the second half, but we find that Karl Darlow is eager to prove a point to whoever comes in and takes over at St James Park. He makes ludicrous saves, absolutely ludicrous, and we can’t beat him. At the other end, with the three minutes to go, our back four go to sleep and Ayoze Perez bounces a header off my post. Sometimes you just have to take the point and move on. 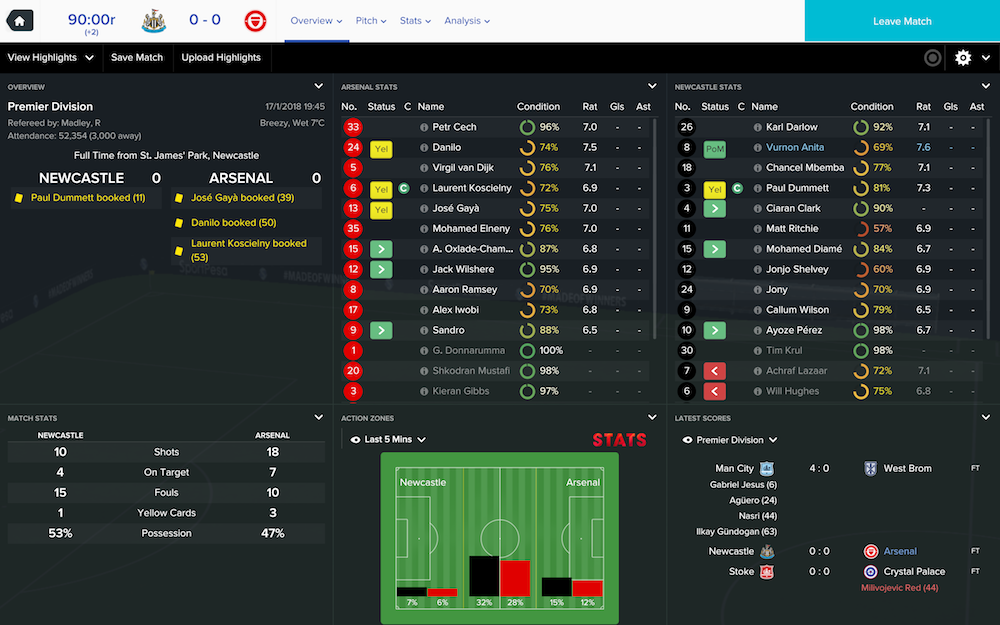 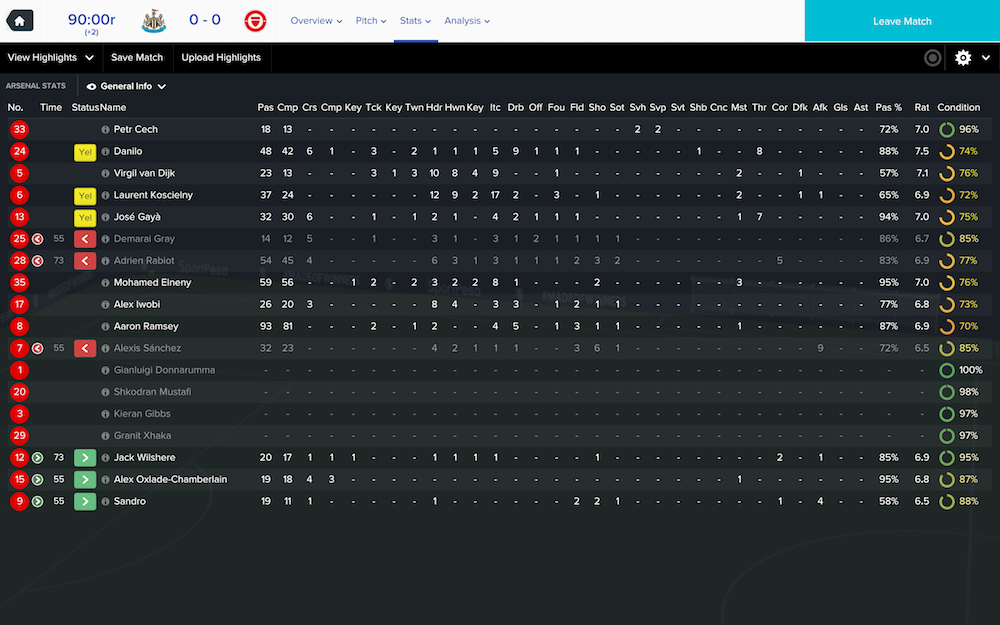 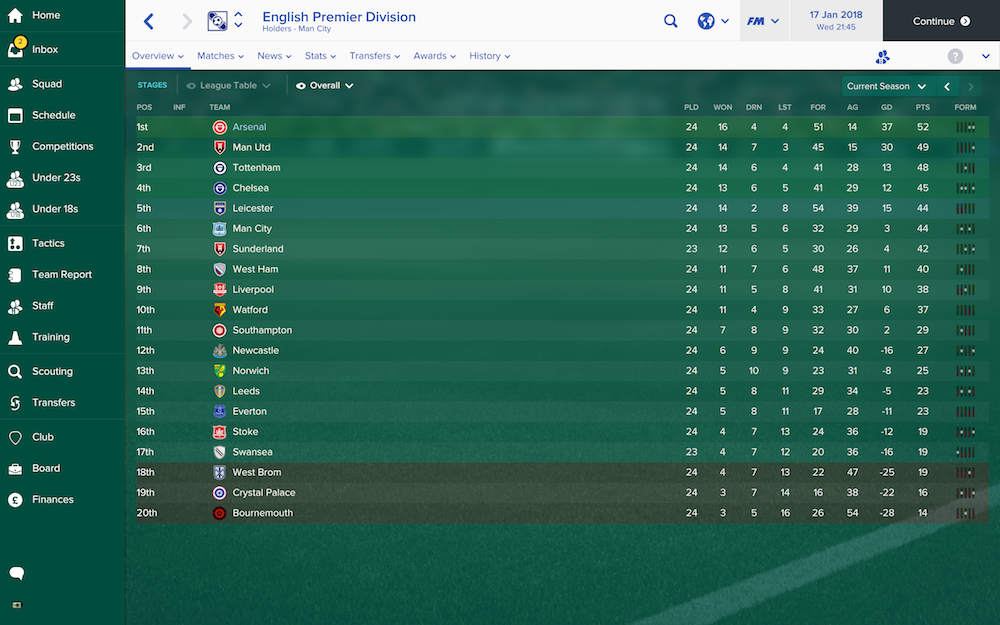 I would like to go to Wembley. I’ve had a good think about it, I’ve weighed up the pros and cons and yes, I would like to go to Wembley, if at all possible. So we’re going to play the best players against Sunderland and we’ll have to beat Stoke with the spares. It’s high risk, but then again, why not? It’s not like I’m playing kids. These are all footballers of considerable ability. And looking back, we’ve actually drawn three games on the bounce, so maybe a change is what we need anyway. 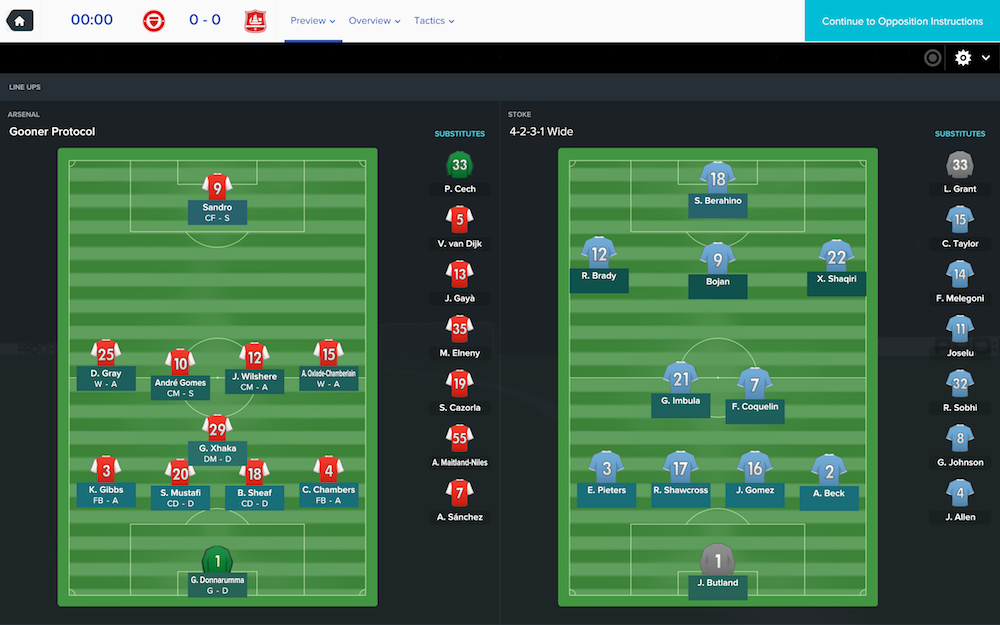 We’ve chosen a very bad time to pick up a very bad habit. Once again, we dominate the game. Once again, we have no problem creating chances. And once again, we couldn’t hit a cow’s arse with a banjo unless we were, by some quirk of fate, encircled by cows bottoms and had a banjo that was laser-guided by an SAS solider in a nearby foxhole.

Stoke caused us fewer problems than Newcastle, though we were indebted to Gianluigi Donnarumma for one outstanding save, but it didn’t matter because we were so bad up front. I am unamused. This is not how league titles are won. 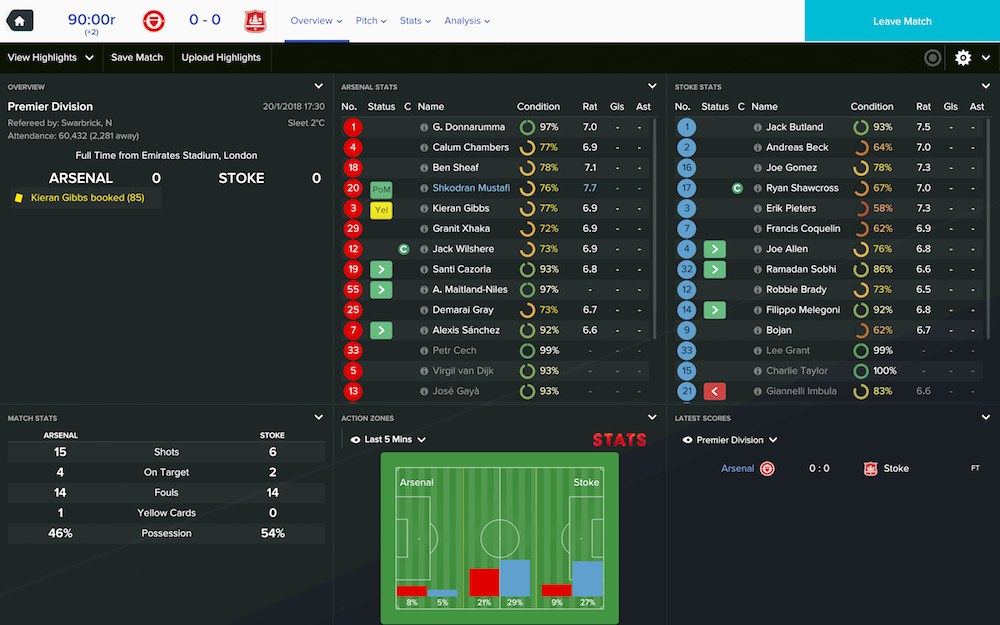 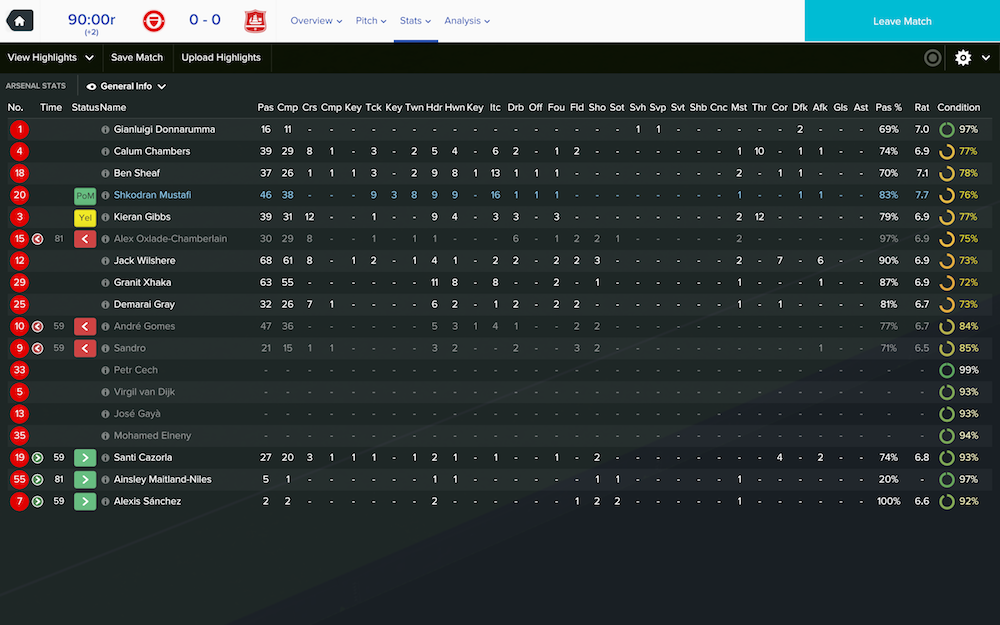 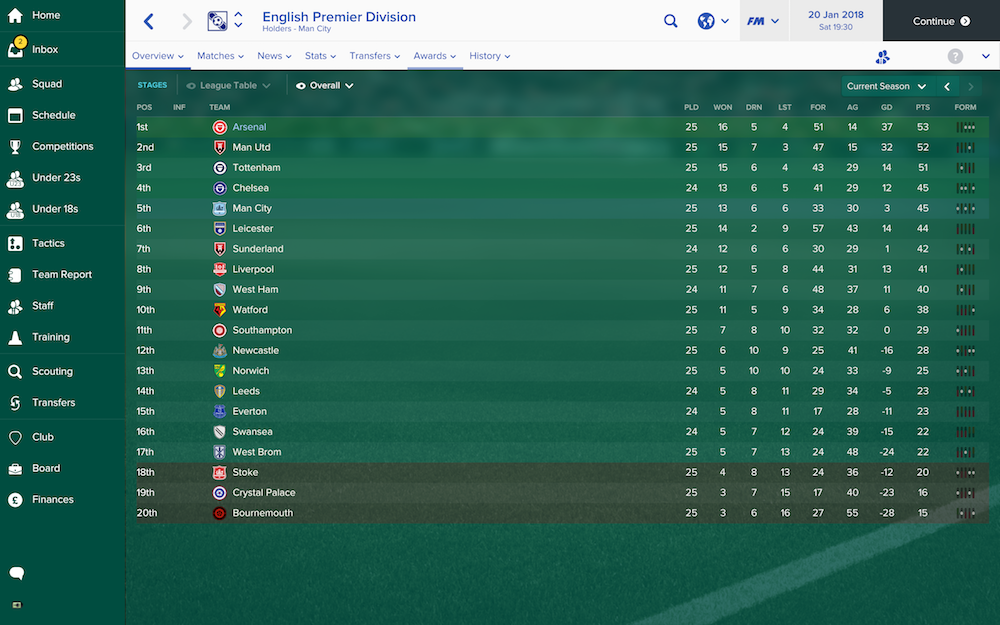 Well, having taken and lost that gamble, I suppose the only consolation is that we can now play the League Cup semi-final with a completely fresh first team. Of course, if somehow fail to wrap this up, I will be taking the rest of the day off to do some serious alone-time drinking. 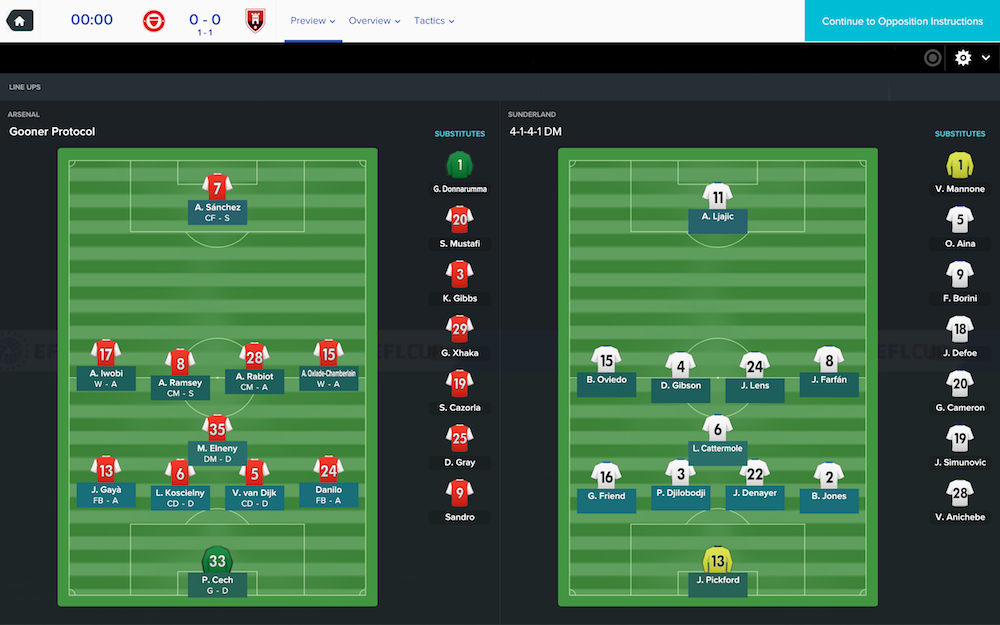 Two hundred and ninety eight minutes. That’s how long this football team goes without scoring. And it feels like an eternity.

This feels less like a two hour football match and more like a graphical demonstration of every single animation that Sports Interactive have for not scoring a goal. We hit the post and we hit the bar. We see Jordan Pickford making great technical saves, great reaction saves, fortunate saves, entirely accidental saves and we see his team mates weighing in too, clearing the ball off the line four times. Four times.

There’s really not much I can do but sit and watch through my clammy hands. I bring on Sandro and go with two up front, I switch to Klopp Protocol, I bring on Demarai Gray to stretch Sunderland’s tired legs. And they are so tired. By the time Sandro finally scores, several of their players are only 40% fit. That’s roughly the state of the Brownlee brothers when they cross the line after a triathlon. And still, we could only score one. Mind you, on the bright side, we haven’t conceded in three hundred and eight five minutes. So there is that. 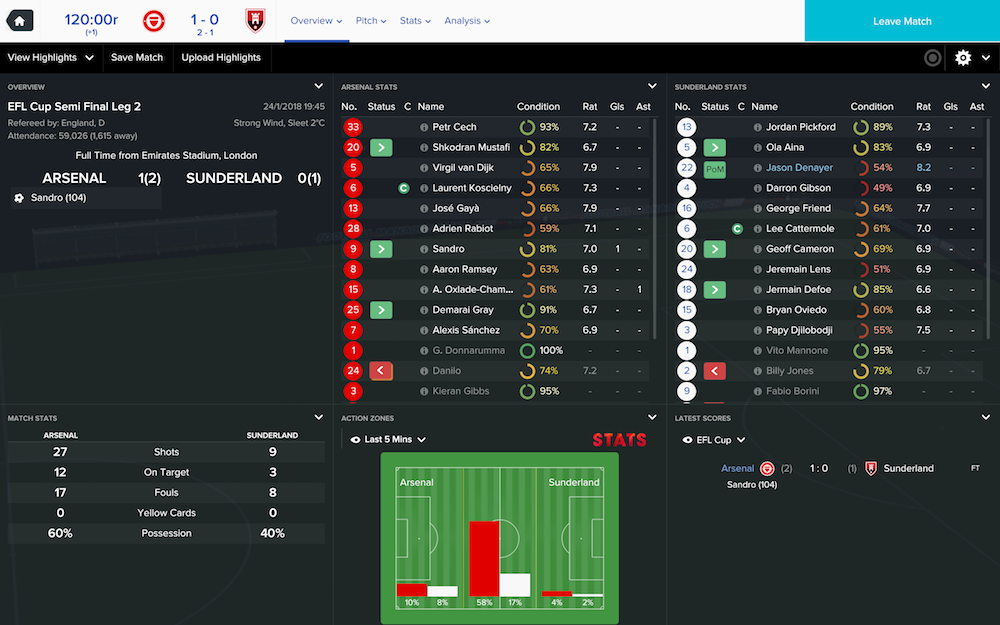 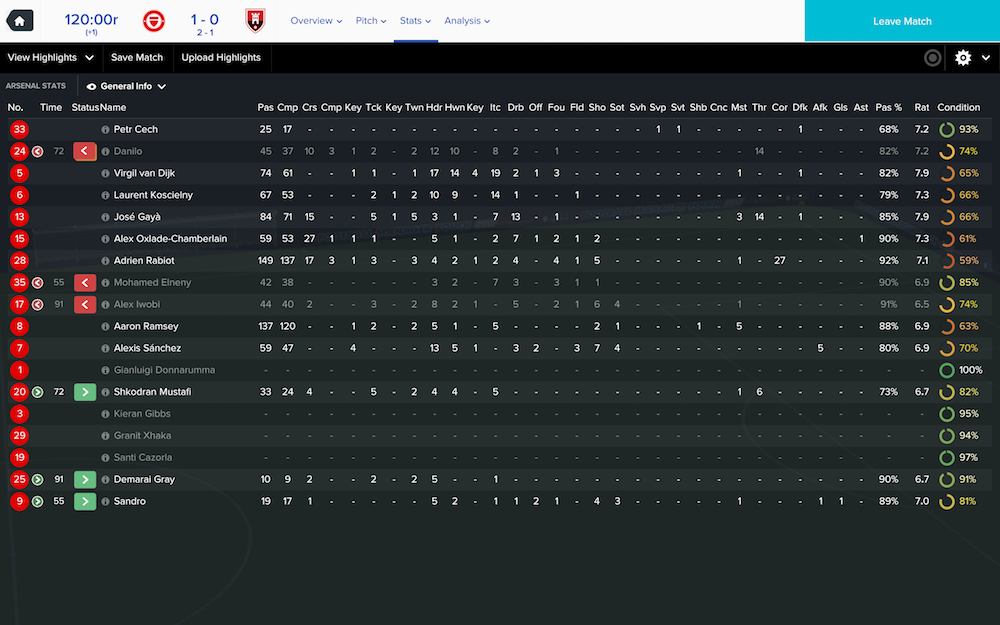 There is, of course, absolutely no chance that any of those players can go out against Manchester City in the FA Cup now. It will be a complete change, but that’s no bad thing. Insane goal drought notwithstanding, this is still a fine team. And, to be quite honest with you, I will not give even the faintest of fucks if we go out. 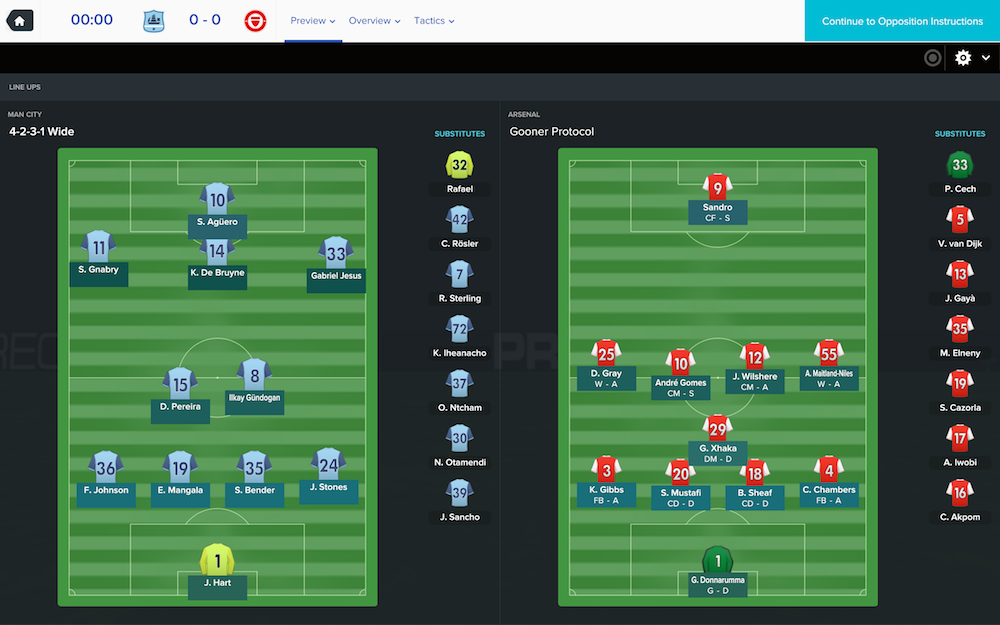 Yeah. I do not give a fuck. 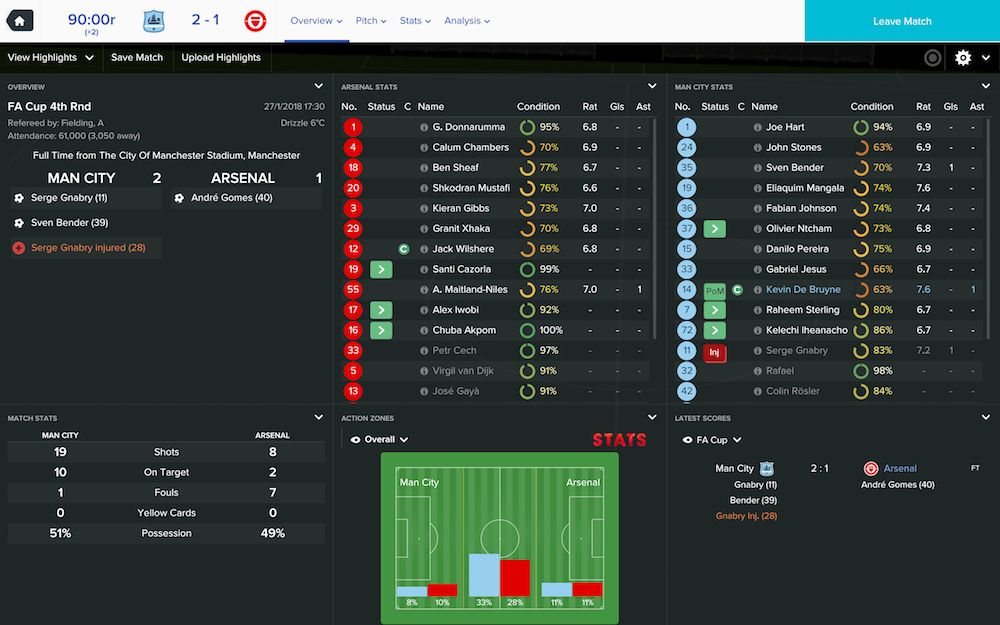 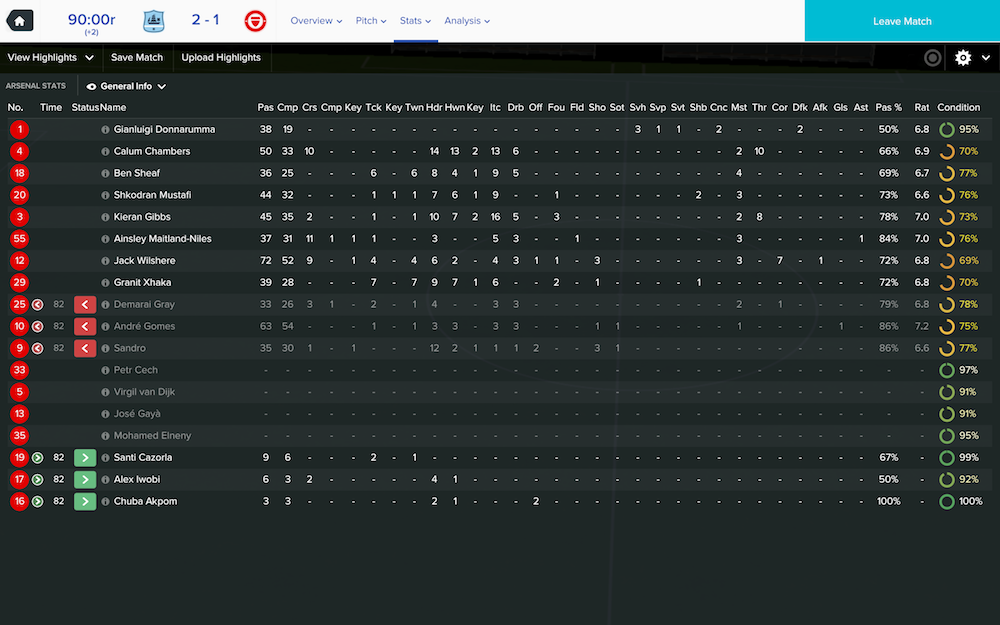 I will give a fuck if we don’t beat Sunderland in the league though. We had a nice little lead and those silly draws with Newcastle and Stoke have seen it evaporate. We’ll have the first choice team here, the crippled Theo Walcott notwithstanding, and I expect us to play as we have done over the past four months, rather than the past four games. 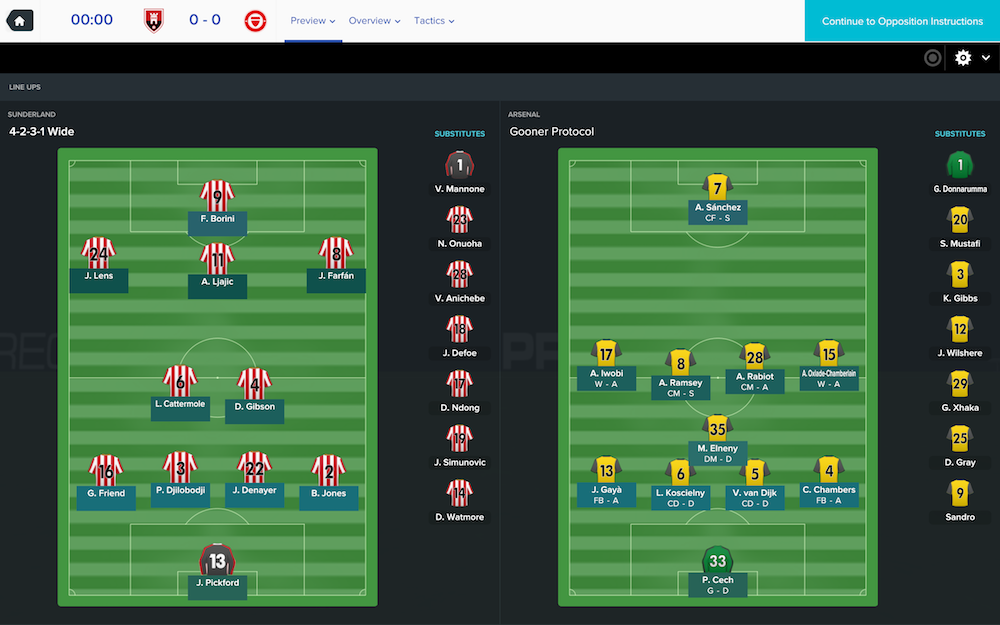 I had forgotten what a routine victory felt like. Not that it was routine in the first half. That was just a slog against David Moyes’ irritatingly robust defence. But after an injury to Oxlade-Chamberlain, Demarai Gray came on and broke the deadlock with an excellent solo effort. Suitably reassured, we settled down after that with Laurent Koscielny heading home from a corner shortly afterwards. And that was that. Castle Protocol, shut it down, take the points back down the A1. 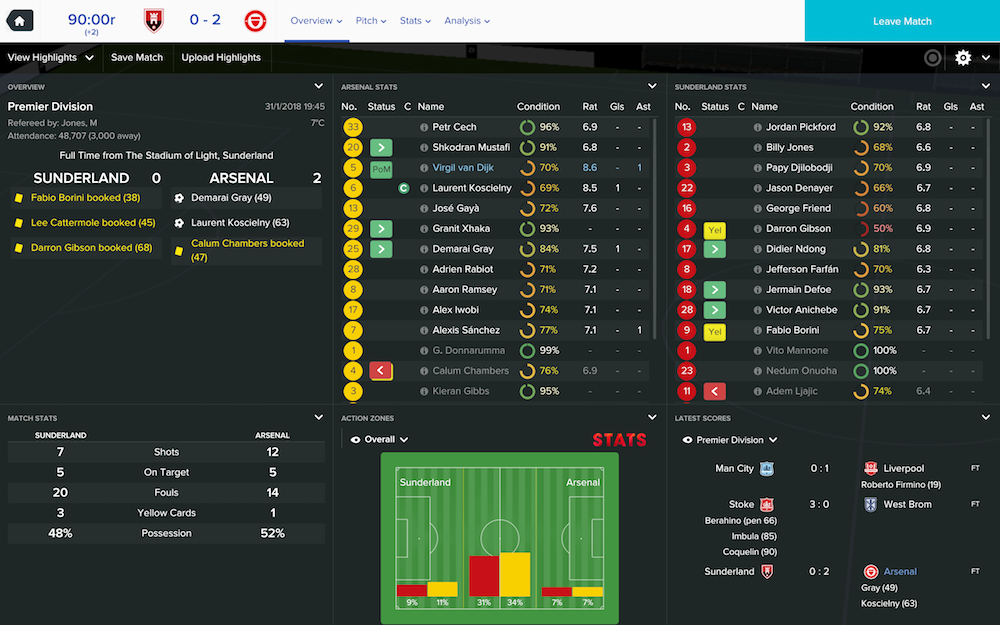 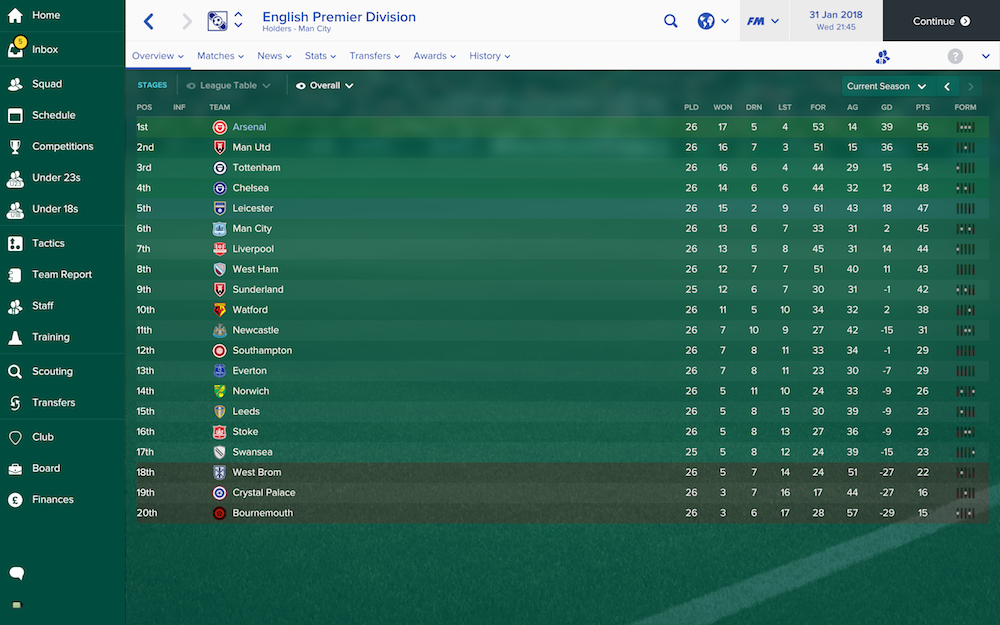 This has been a gruelling month. We’ve let a five point lead dwindle into one and we’re out of the FA Cup. We’ve lost Walcott for the rest of the season and I’ve noticed that Donnarumma and Mustafi are starting to get miffed with their supporting roles. And yet…

We just played nine games in 31 days and the only one we lost was the FA Cup tie that I was happy to sacrifice. I didn’t want to draw with Newcastle or Stoke, but it could have been worse. It’s also worth noting we conceded just four goals in this run and three of them were to Manchester City. We’re the hardest team to beat in the league.

The rotation policy has helped safeguard our players. Walcott is the only serious injury and there’s little chance of fatigue setting in. Only four of our players have made more than 25 starts in all competitions compared to Manchester United (8), Tottenham (7) and Chelsea (8). We are nicely set for the run-in now. And City, as happy as they undoubtedly were to beat us in the cup, lost their next game at home to Liverpool.

Next month, the Champions League starts up again and we’ve got Atletico Madrid, scant reward for topping our group. We’ve also got the small matter of a League Cup final. That was the first (and last) competition I won with Everton on CM01/02. I sincerely hope it’s an omen. 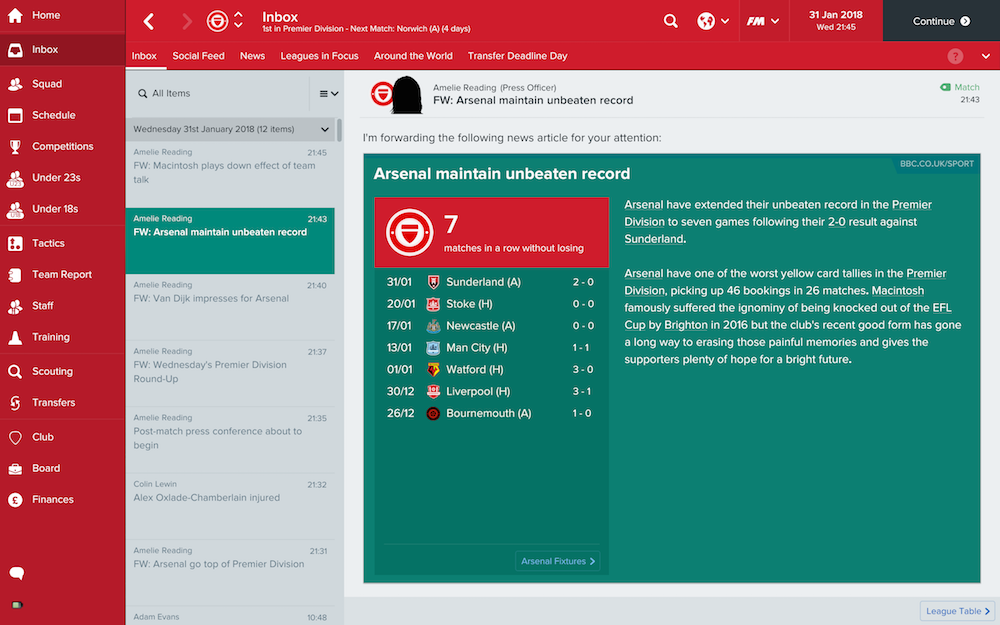