IAIN: Days before our meeting, West Bromwich Albion sack Tony Pulis. This is upsetting. Not just because I like the man, but because I’d rather play a struggling team under a compromised manager than a liberated team with something to prove to the incoming replacement.

I head off a minor problem in the dressing room by telling the players not to worry about squad depth as I want to bring some youngsters through. Only Mesut Ozil has a problem with this, but he has a problem with everything, the big-eyed, slack-jawed, under-performing bastard.

Hopefully, he’ll approve of Bellerin’s replacement, Danilo, snapped up for just £17.5m. And he’ll start against the Baggies. 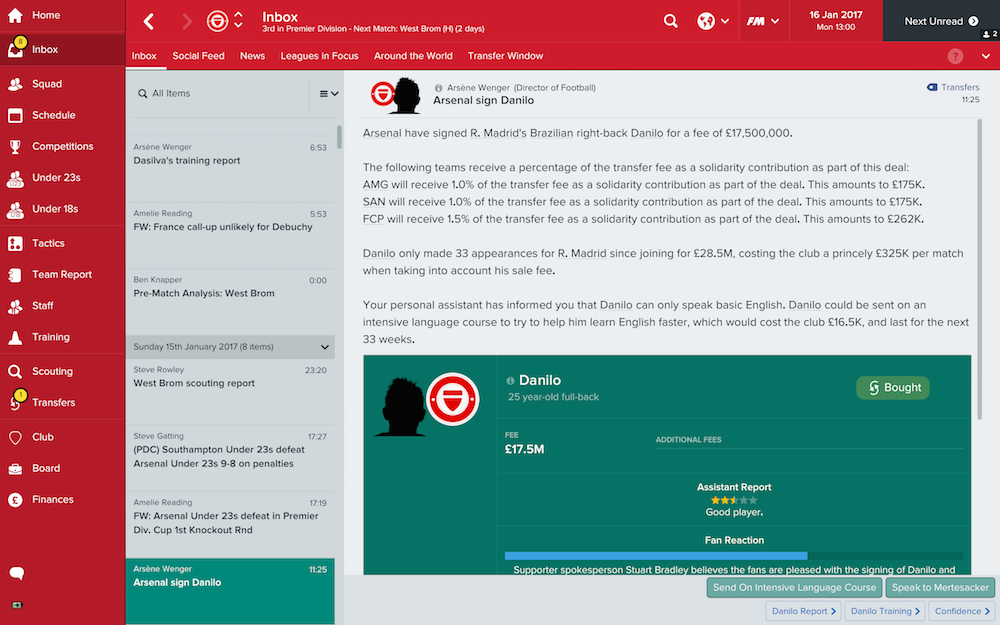 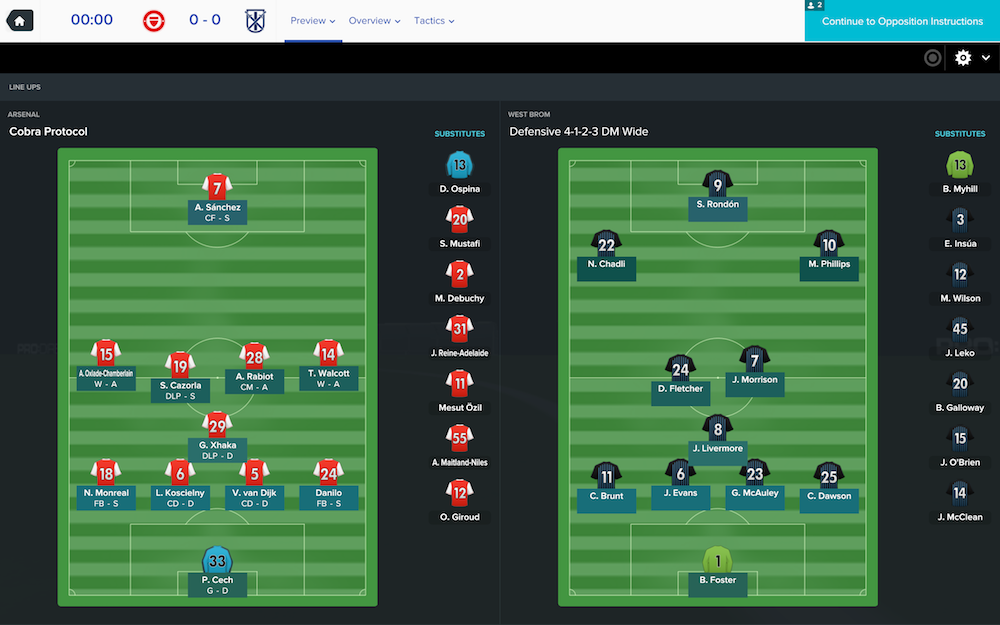 It’s a strange one, this. West Brom dominate possession, but squander it with a succession of long shots, all comfortably gathered by Petr Cech. We take the lead, another fine run by Rabiot the precursor to another fine finish from Walcott, but we don’t add a second and we never look like doing so. It’s a quiet night for Sanchez, but I’ll let him off on account of him having 21 Premier League goals already. It’s mid-January. 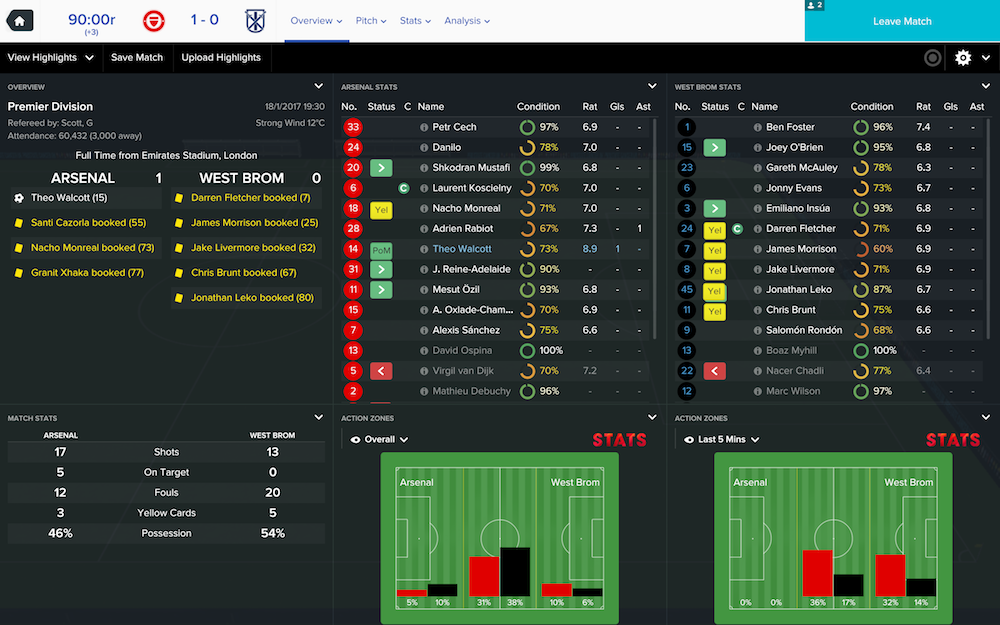 ALEX: Pulis is sacked by West Brom. “Oh, for fuck’s sake,” says Iain. “I’ve got them next.” Getting his excuses in early. As am I, when I notice that AFCON has robbed me of Mane and Matip. I swear, loudly, before hurriedly confirming that the office door is, in fact, shut.

I am worried about Spurs, who are a good side playing well. We are that, too, but I am stalked by the spectre of recent failures in other leagues and when push comes to shove, fear the collapse, the laughter, the punishment of my erstwhile successes. The mental side of this game should never be underestimated.

I keep my team the same insofar as I can, with Lovren standing in for AFCON-bound Matip, and Sturridge taking Mane’s place, but playing a more advanced role, with Firmino the deeper-lying striker. 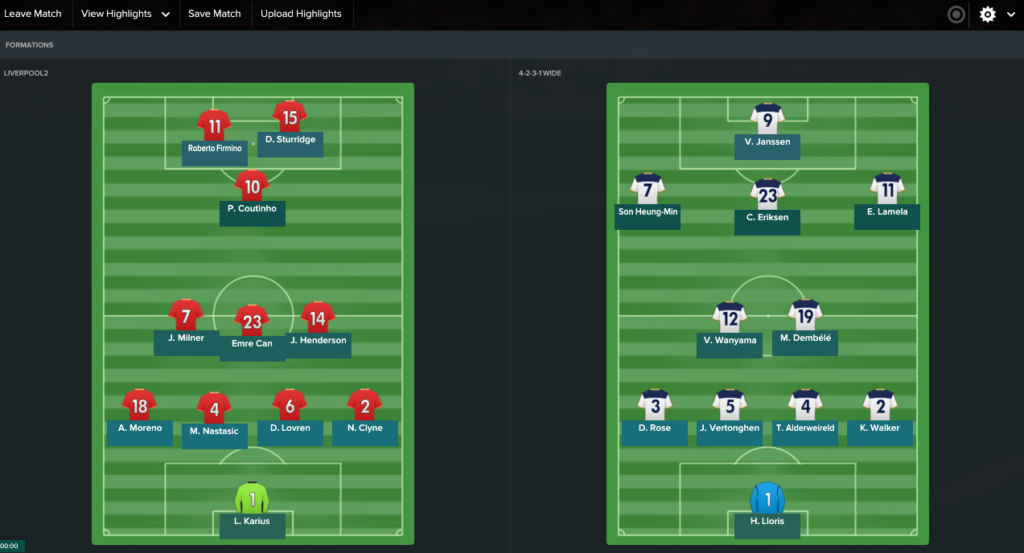 It’s a tense, cagey, no highlights sort of a game until a chink of light in Spurs’ armour appears: Wanyama is sent off for a second bookable offence and there are still 60 minutes left. This is followed shortly afterwards by a goal of such quality that I will describe it for you now: Karius rolls the ball out to Moreno. Moreno carries it forwards, passes inside to Milner. Milner to Henderson, Henderson to Coutinho, who chips a pass through to Firmino. Firmino holds, holds, holds then lays it off to an on-rushing Sturridge. Sturridge bursting through, rounds Lloris. 1-0. The Daisy Lowe of counter-attacking goals.

Seconds into the second half, though, Moreno evens the sides up by getting himself dismissed by straight-redding it through the back of Lamela. I reshuffle the pack, subbing Henderson, who is on a yellow, for Targett and moving him to left-back. I withdraw Coutinho into a central midfield role as a playmaker, drop Firmino into the hole, and keep Sturridge up front: a 4-3-1-1, but slightly more asymmetrical.

The game goes into a back-and-forth phase, nervily so for me, before Lovren heads in a Coutinho free-kick for his first of the season to make it 2-0. We hold out for a massive win. We are top of the table, have won 10 Premier League games on the bounce, without conceding in seven and playing sumptuous football. I am ecstatic. 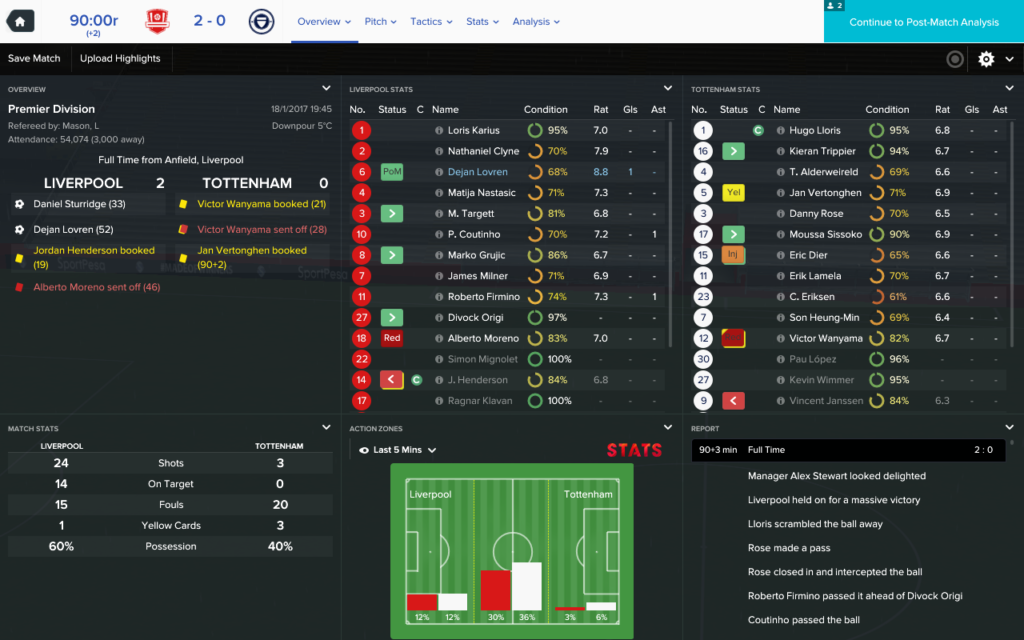 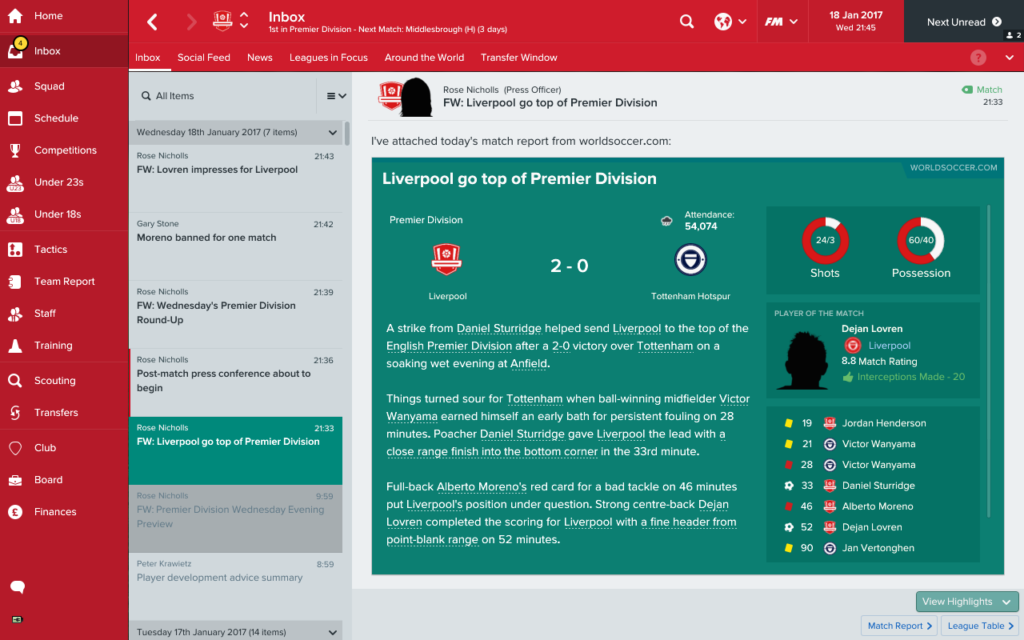 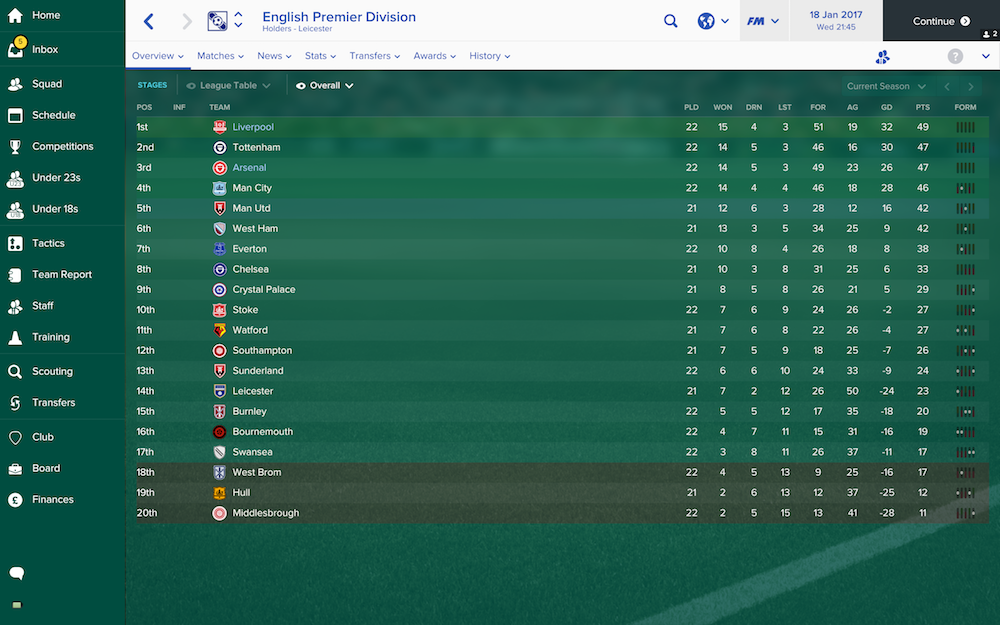 IAIN: Next up are Leicester City, the champions I obliterated at the start of the season. They are in the bottom half of the table, they’ve lost scores of players to the African Nations and they’re not in good form. I realise that we’ve won eight consecutive Premier League games and that we play a tight, compact counter-attacking formation that provides a blend of defensive solidity and attacking verve, but I’m the Arsenal manager and, as such, I’m terrified.

Still, we seem to be at whatever passes for full strength. Can we continue to win? 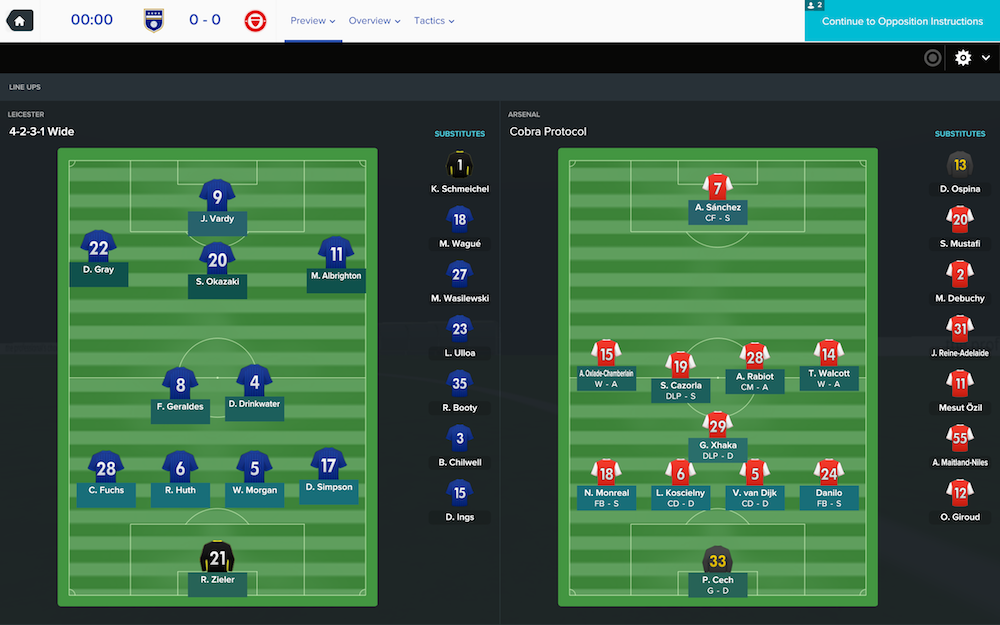 No. No, we cannot. It all started so brightly. Rabiot went on another of his storming runs through the middle, slipped it out to Oxlade-Chamberlain and his cross was nodded in by Sanchez, who looks back to his old self. But within five minutes, the lead is lost. We can’t clear our lines, the ball falls to Jamie Vardy and his shot is deflected past Petr Cech by Laurent Koscielny.

Immediately Leicester fall back, putting two defensive midfielders in front of their back four and playing keepball whenever they regain possession. Our chances dry up. On the hour, I move to Phoenix Protocol, an attacking 4-4-2 that sees Giroud join Sanchez up front. We fail to make a single chance of note and the game is drawn to a soundtrack of hearty celebrations from Alex behind me. I wonder what’s going on over there. 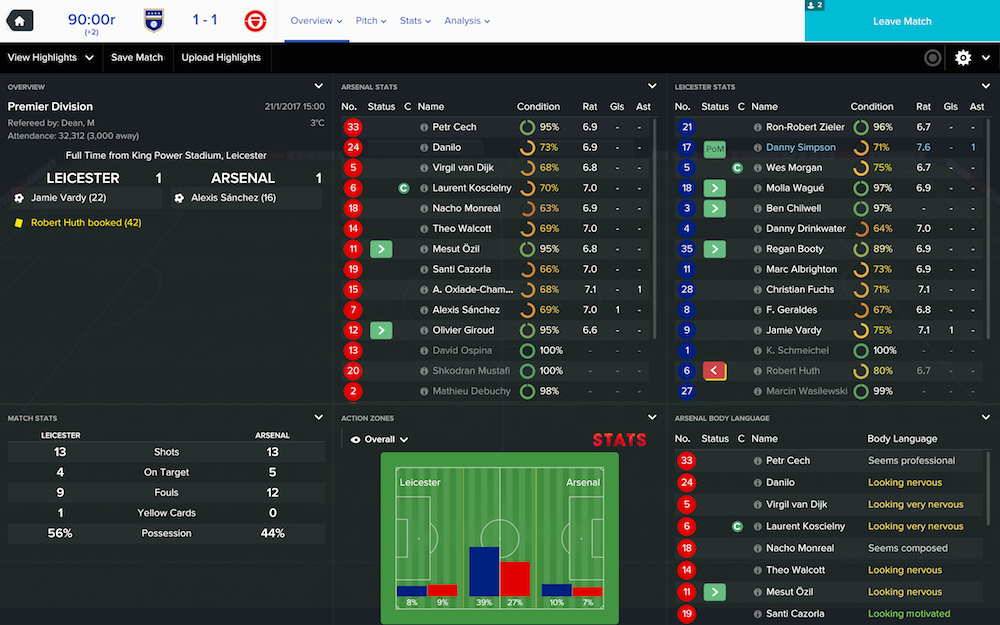 ALEX: Next, we host Middlesbrough, as bad in the game as they are IRL. They sit in 20th and we, in case I hadn’t mentioned it before, sit in 1st. I tell the press I am committed to playing football ‘the right way’, which means oodles of possession, oodles of shots, and a bit of swagger. Hopefully the deep-sitting, generally tedious ‘Boro won’t disrupt this approach.

With Moreno suspended after his horrible challenge on Lamela, I push Targett into the left-back slot and bring Stewart back into the squad. I note with no surprise whatsoever that Can is unhappy, but Grujic is waiting in the wings and I am resolved that if I receive a bid reflecting his value, Can can leave without it being a folie (complex pun for you there, lads). 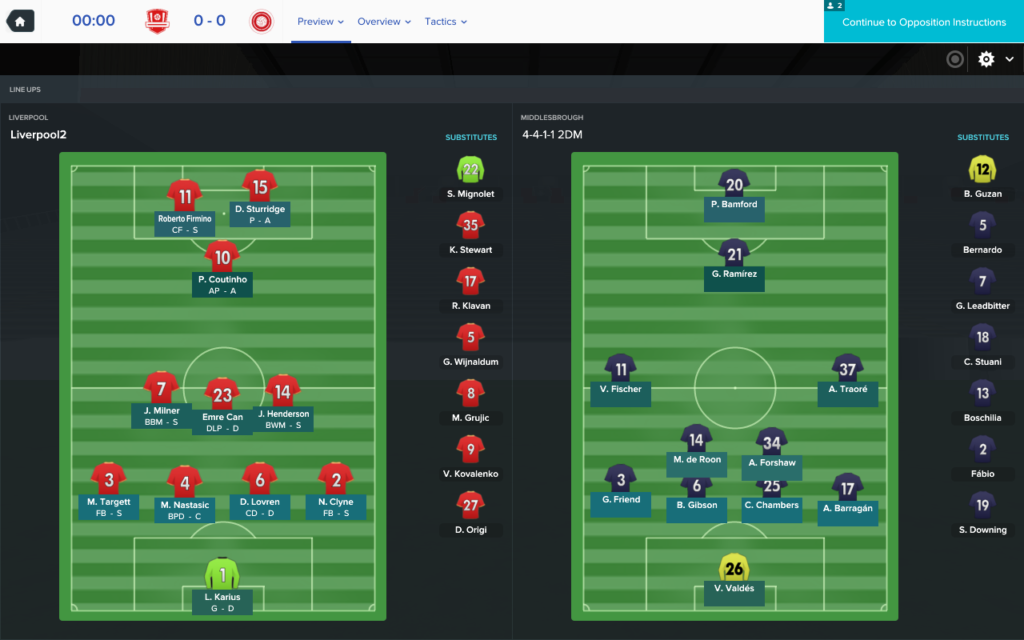 ‘Boro are the sort of side designed to bore a team into errors, but we are better than that. It does take a while, but finally Targett lofts it to Sturridge, who chips through to the onrushing Firmino – 1-0. We continue to pile on the pressure without scoring, and I bring on Grujic, Wijnaldum, and Origi.

Finally, we score again, and it’s glorious. Coutinho chips a corner to the edge of the box, and Wijnaldum, first time, sends it back to him. Coutinho then plays it along the ground back to the Dutch midfielder who has burst into space, and he rifles it past Valdes. I’d love to say I had worked on that, but I have not. It’s just class, from classy players.

We have 26 shots, eight on target, and ‘Boro manage none; we also have 61% of the possession. As in life, so in the game. We have now won 11 Premier League games on the bounce and haven’t conceded in eight. I know if you can add up you’ll have realised that already, but I will never tire of reminding you. 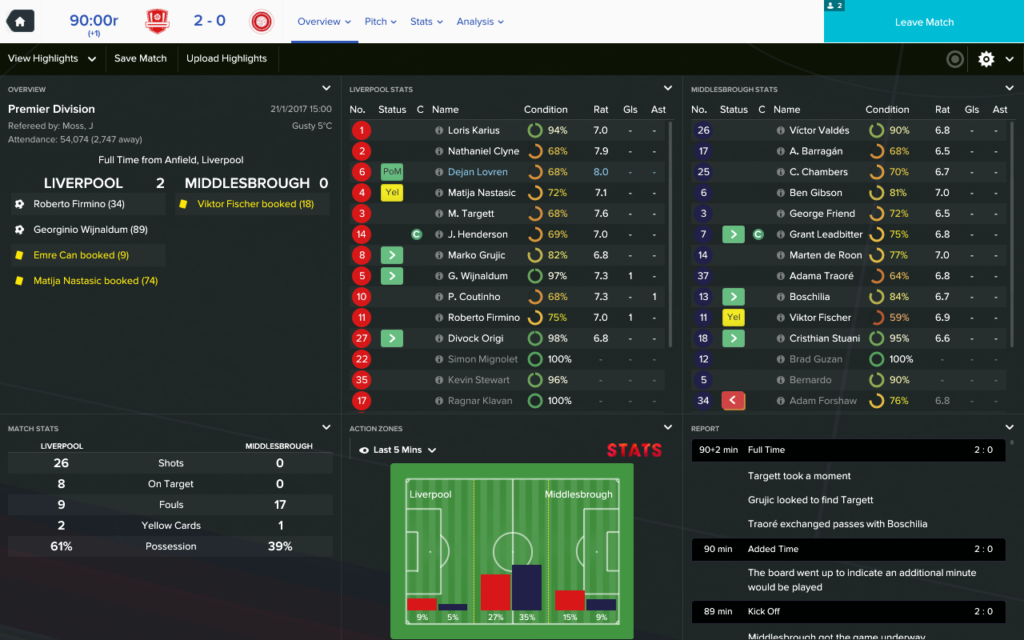 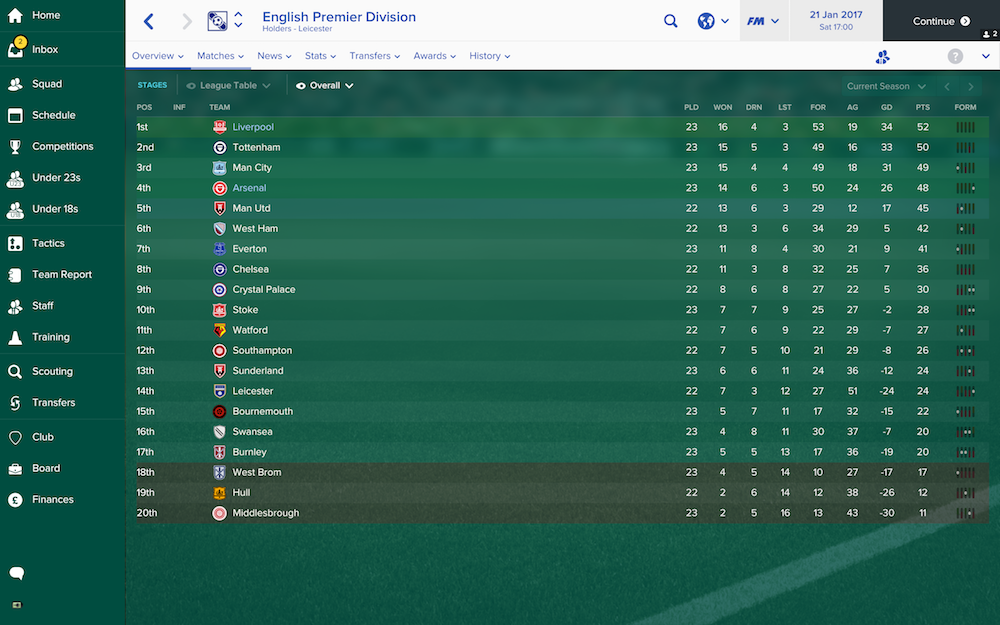 IAIN: Now, I have a bit of a hole on the left flank. Alex Oxlade-Chamberlain does a fine job, but it’s not his natural position. I want Alex Iwobi to play there, but he’s been agitating for a move to Manchester City and I can’t talk him around. I thought I’d see how he was when he returned from the African Nations, but he’s torn a calf muscle and will be out until mid-April. Given that I am dripping with money, I’ll take a chance on this young man. 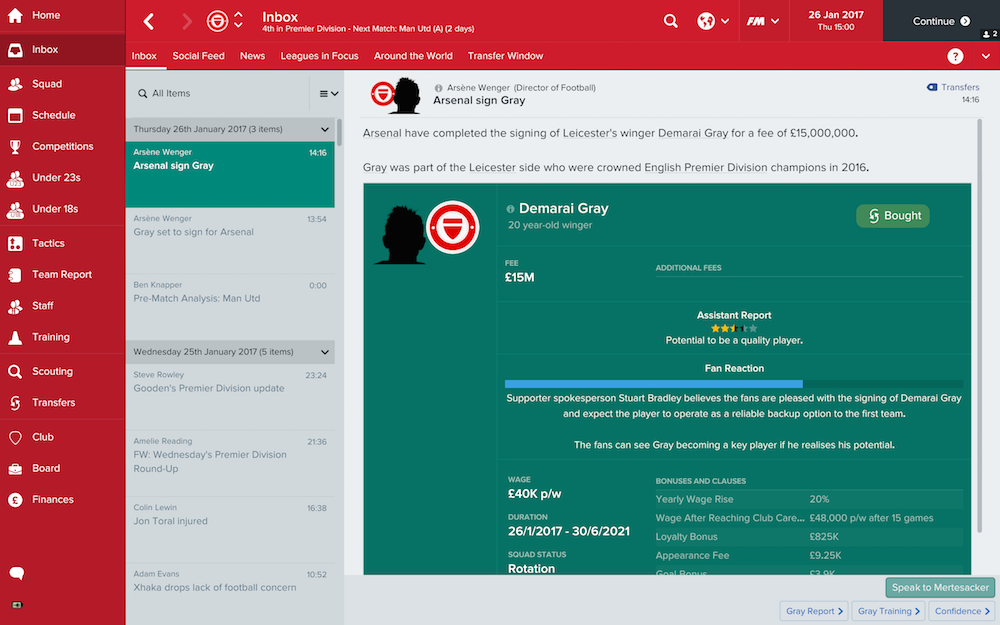 At least we have a chance to improve our mood in the cup, though not a particularly easy one. We’ve ended up with Manchester United away from home and I’d imagine that Jose Mourinho would like to redress the balance after we pulled his pants down in December. Van Dijk is cup-tied so Shkodran Mustafi comes back into the defence. But aside from that, we’ll make no changes. It’s a win-win for us, this. If we win, we’ve got a decent crack at some silverware. If we lose, we’ll make full use of those weekends off in the coming months. 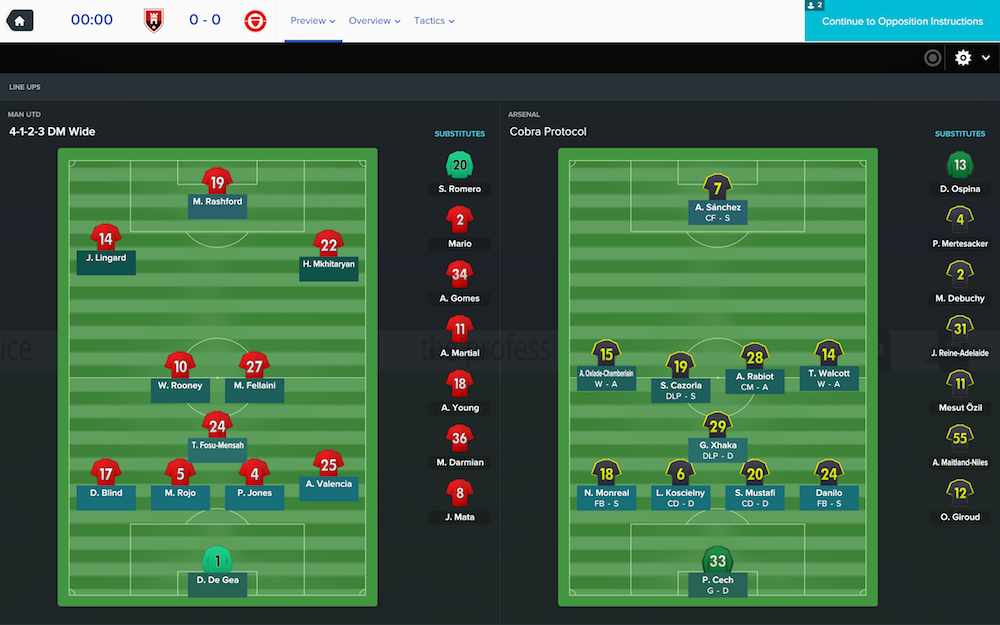 I’m assuming that the BBC chose to screen this one, given that it’s Manchester United, and I think they got their money’s worth. We are torn apart by a fantastic counter-attacking goal from Jesse Lingard and the outstanding Marcus Rashford after just eight minutes, but we went behind to this lot last time and still won 4-1, so I’m not too concerned.

Sure enough, Rabiot soon sets up Sanchez for the equaliser and then Mustafi heads home from a neat corner. The game looks comfortable until the hour mark when Theo Walcott twists his knee. I’m distraught, we’ve only just got him back. I switch Oxlade-Chamberlain to his preferred right flank and ponder a replacement on the left. Do I go with a like-for-like swap and put on Reine- Adelaide, or do I give Mesut Ozil a chance to do something, perhaps a wide playmaker? I go with experience. 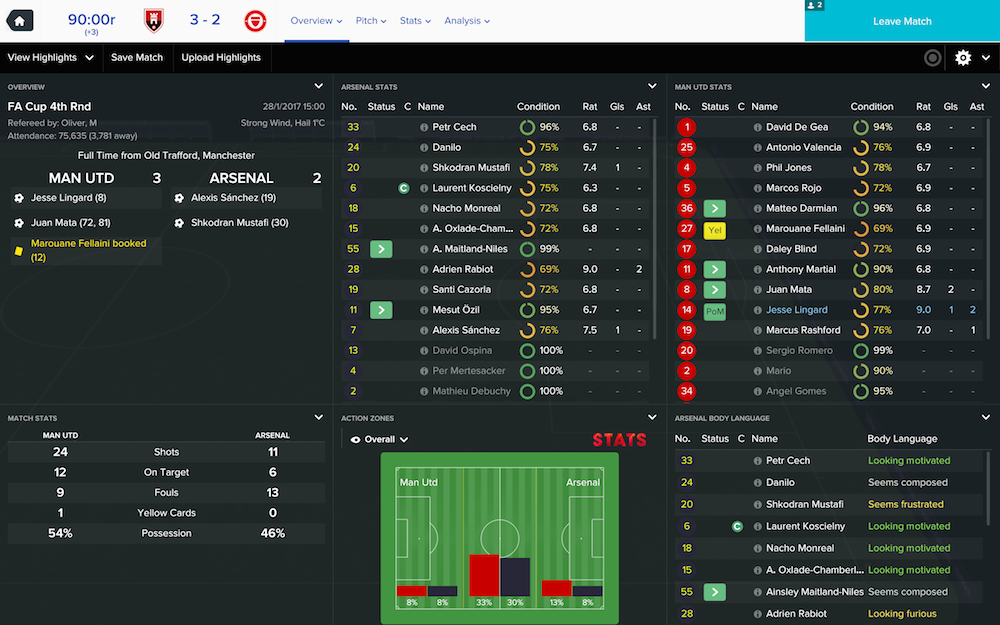 ALEX: Juventus come in with a £21.5m offer for Lallana – money, and no improvement to the competition – yes, thank you kindly my hunch-backed friends. Moreno is given a further two match ban, which I appeal but unsuccessfully, just to prove to me that every silver lining comes with an attendant cloud. Ragnar Klavan is also clamouring for first team football, which is a stretch. I don’t want to change a winning team and, oddly, Lovren is doing well in Matip’s absence.

The last game of January sees us travel north to take on the Tigers in the FA Cup 4th round. I drop Can for Grujic and rest Sturridge and Coutinho, bringing in Origi and Kovalenko. The latter two are absolutely rotation, but I’ve had enough of Can, and this is a dropping. I want to be very clear about that. I think Grujic can step up and his potential rating means that the more I play him, the quicker he’ll fulfil that promise and become a player of Can’s ability. No time like the present to get going on that journey. Moreno’s additional suspension means Targett keeps his place. 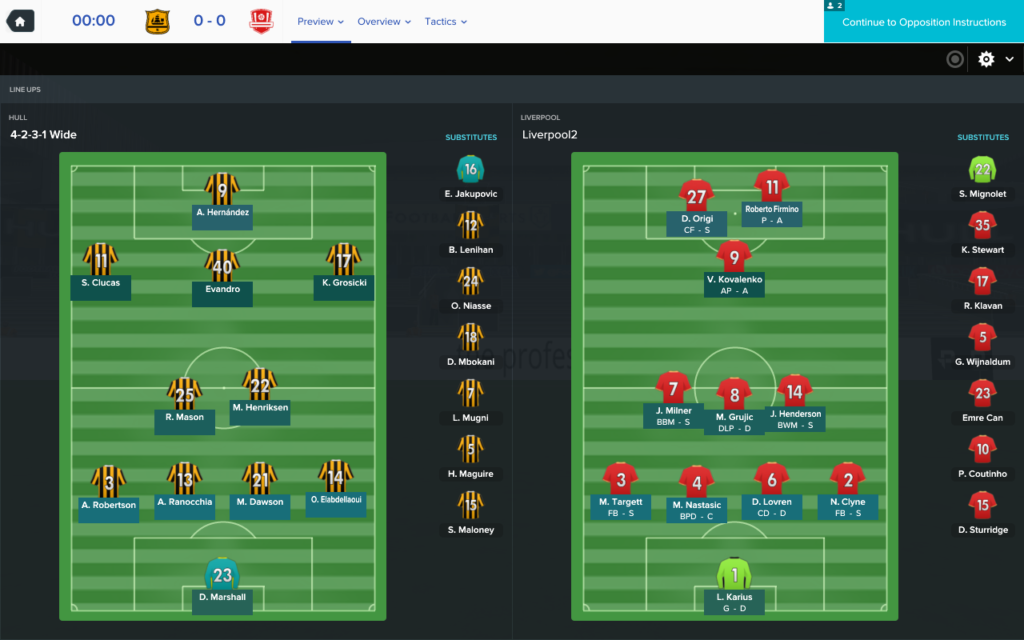 We begin brightly: Firmino, Origi, audacious shot, goal. But then Hernandez heads an equaliser – “They’re going to score, they’re going to score – they’ve scored”, I say, infuriated by my own prescience. It’s the first goal Karius has conceded in eight matches and, to be fair, he had no chance from close range.

Lovren comes off with a hamstring injury just before half-time, so it looks like Ragnar might get his wish after all. And then, disaster. Lucas Mugni (who he?) scores for Hull. We throw everything forwards but cannot equalise and, despite 62% possession away from home and 13 shots, four on target, we are out of the FA Cup. And it’s a Klavan mistake that costs us. Maybe I will buy a new centre-back, after all.

It is scant consolation that Iain is also out of the cup, but I am mollified that we can now concentrate on the league. Even so, I am angry and tell the players as much, getting lots of fired up green in response. We have Burnley in our next game and it is my fervent hope we make them suffer; nothing against Dyche’s men, of course, but I want a response. I will have a response. 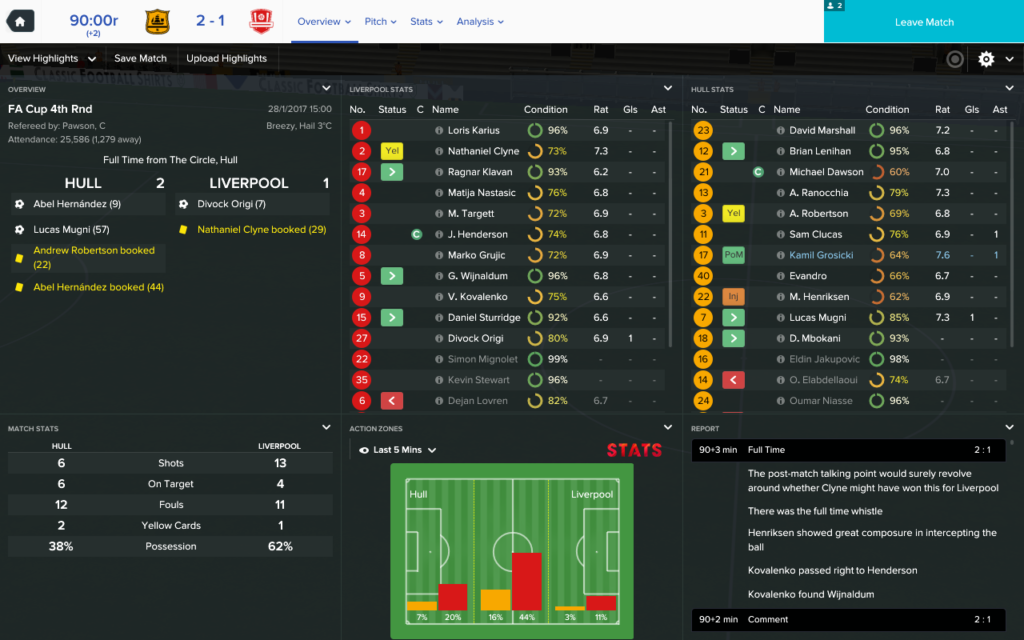