IAIN: I’ve told Alex to expect a team full of kids for this, but it’s a token gesture of gamesmanship that I don’t think he believes for a moment. If it was Rochdale away, then it would be a full debut for Jonas Olsson with Lucas Perez off the reins up front. But it’s Liverpool. And it’s Alex.

Besides, Arsenal have played their kids in this competition for over a decade. All things being equal, I’d rather just win the thing. I like trophies. I like the way my face looks in their reflection.

My only concern is that I haven’t got a clue how Alex will line-up. I’ve watched a few of his games and there are plenty of weaknesses. His full-backs are very ambitious, his defence is slow to react and his goalkeepers are not good enough for this level. But there’s so much talent up front, he can’t be taken lightly. While I toy with the idea of using Olivier Giroud and tossing lots of horrible crosses in to baffle whichever one of his misbegotten goalkeepers plays, I think it’s safest just to stick with the Cobra Protocol and see how it goes. 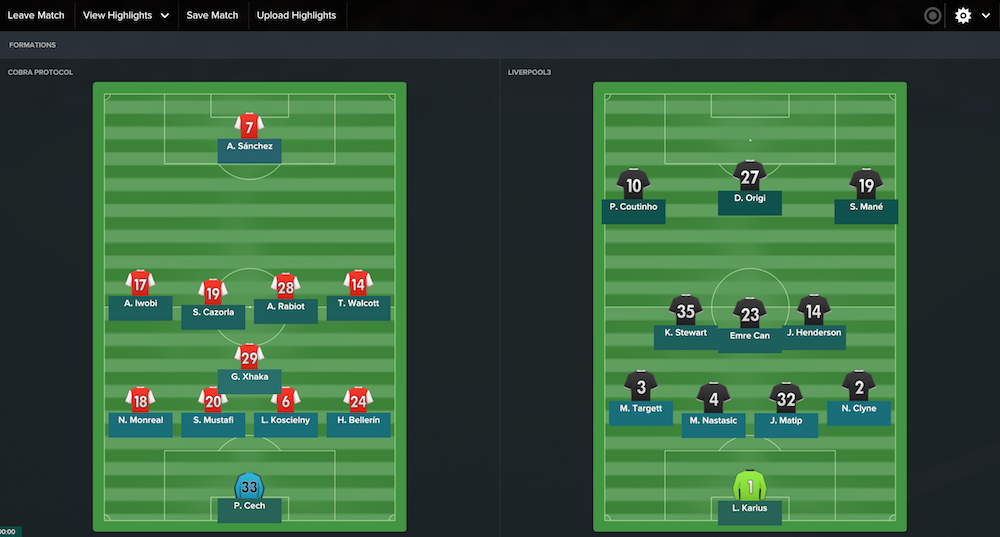 ALEX: What to do when a cup competition is in no way a priority, and yet it pitches you against your fierce rival, Arsenal’s Iain Macintosh? Do you take it seriously, fret over tactics, throw in the big guns? Or do you play the long game, knowing that one early fixture’s bragging rights mean nothing when set against the whole season?

Are you kidding? It’s Iain. I want to beat him. I want to beat him in everything we do. He’s realised that Arsenal actually have some good players so he’s winning games, and he’s banging on about protocols and generally being insufferably Iain-ish, and so this is a chance to upset his apple cart and potentially sow a few seeds of doubt into his mind and that of his players.

I know that, being a Macintosh team, they’ll be cagey and play with width, and so I opt for the wider version of my strikerless formation, which doubles up on the flanks. It leaves Origi with a lot to do as a lone shadow striker, but if there’s an area Arsenal are not exactly flush in, it’s mobile centre-backs. Upsettingly, Jimmy Milner gets crocked and must sit the game out, so the reliable Kevin Stewart comes into an otherwise unchanged midfield, and the defence is my first choice.

“Why are you starting Karius?” says Iain when he sees my line-up. “Because he’s better than Mignolet, Iain.” I sometimes wonder…

IAIN: It goes slowly and without incident. Alex’s shrewd decision to play withdrawn wide men stifles us out on the flanks and, as that’s where all of my play goes, it’s a very quiet game. We cancel each other out for the best part of an hour until I accept that we’re at home and the onus is on us to break the deadlock. It’s Grizzly Protocol time.

Off goes the defensive midfielder, on comes Mesut Ozil, up goes the tempo and up goes the defensive line. And finally, with five minutes left on the clock, we get them. Ozil plays an inspired ball out wide, Theo Walcott gets the jump on Moreno and, of course, Alexis Sanchez steals into score. Before the players have even finished celebrating, I’ve locked them into the Castle Protocol.  This is how it’s going to be this season. Get in, get the crystal and get out before Richard O’Brien starts singing.

ALEX: Oh what a frustrating game that was. Played out in front of the livestream viewers, Liverpool and Arsenal nullify each other for large portions of the game. My system works well to deny Iain’s the width he needs, right up until the 85th minute, when a low cross comes in from Walcott and Sanchez (who else?) somehow squeezes it in at the near post. The fault lies with Matip and Nastasic, who somehow fail to get close enough to stop his shot, and Moreno, who fails to get close enough to Walcott in the first instance. One lapse in concentration from my defence – how very, very Liverpool.

Otherwise, Targett and Clyne play well, but our inability to shoot on target is an issue, with only one of six shots forcing a save. It’s disappointing, and even Iain admits Arsenal were a touch fortunate. I must remind myself that we are still getting to grips with this formation, and I’m still unsure on my best front three. We will also no longer have the irritation of midweek cup games which, added to Iain’s presence in European competition, means we have an easier run in the league. Let’s hope we can make it count. 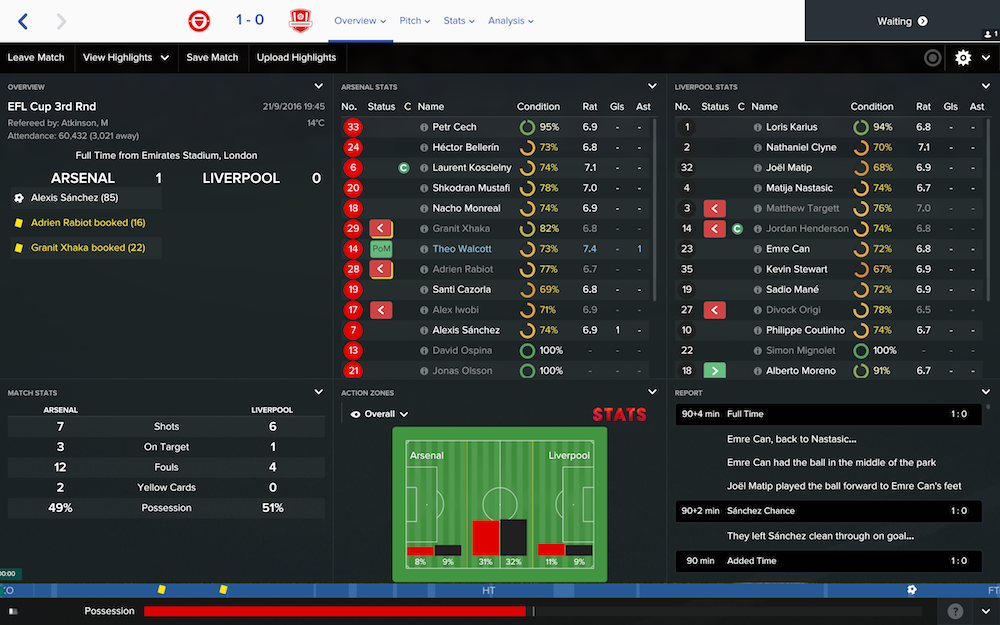 IAIN: Now you’ve probably already noticed that I have a developing paradox. The Cobra Protocol is our best game plan and Ozil is one of my best players, but the latter has no obvious place in the former. I respect Arsene Wenger greatly, but my reign will not be characterised by the use of the same attacking tactics from one weekend to another. We need to be versatile, we need to play smart and that means that sometimes, a lot of the time, we’re going to play 4-1-4-1.

So where does Ozil go? This week, I’ll be trying him out as a deep-lying playmaker, mostly because Santi Cazorla’s battery light is flashing. Ozil has the range of passing, and he won’t have to do any defensive work as the flashy corner of the triangle. It seems to make more sense than playing him on the left wing. We’ll try it out against Southampton and see how it goes. 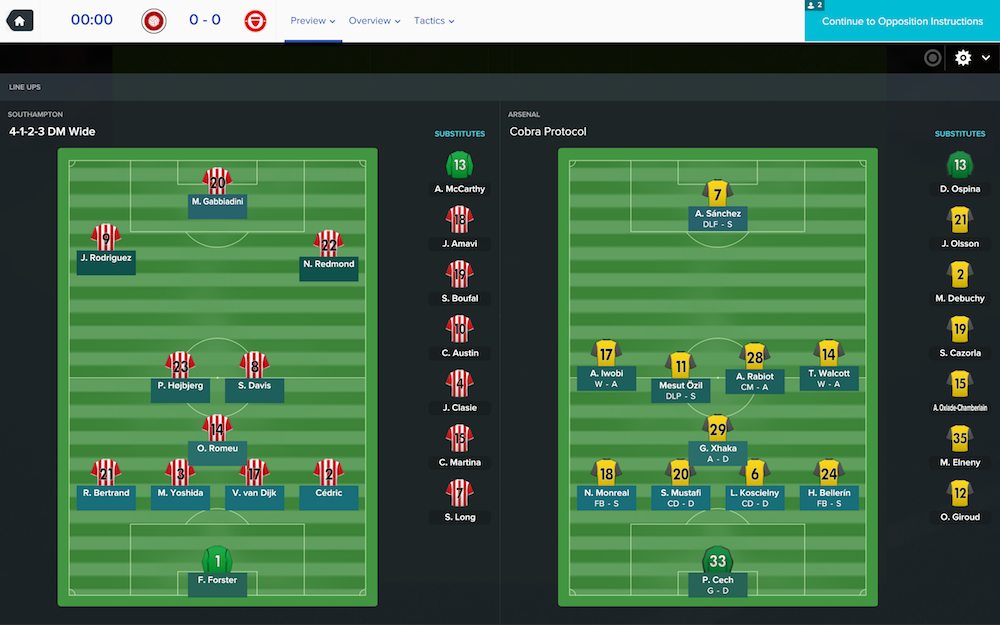 Well, that’s just really annoying. While I wouldn’t claim for a moment that this was a devastating display that warranted an emphatic result, I think we can feel a little aggrieved to have struck the woodwork FOUR times in ninety minutes.

We can feel even more aggrieved to have been punished by a contentious first half penalty. Yes, some of our finishing was disappointingly wayward and, yes, their full-backs hurt us far more than they should have done, but we did not deserve to lose this game. As for the Ozil experiment, the results were inconclusive. He had some moments. There were some killer passes. There were some dreadful ones. That was all. I’ll have to go back to the drawing board. 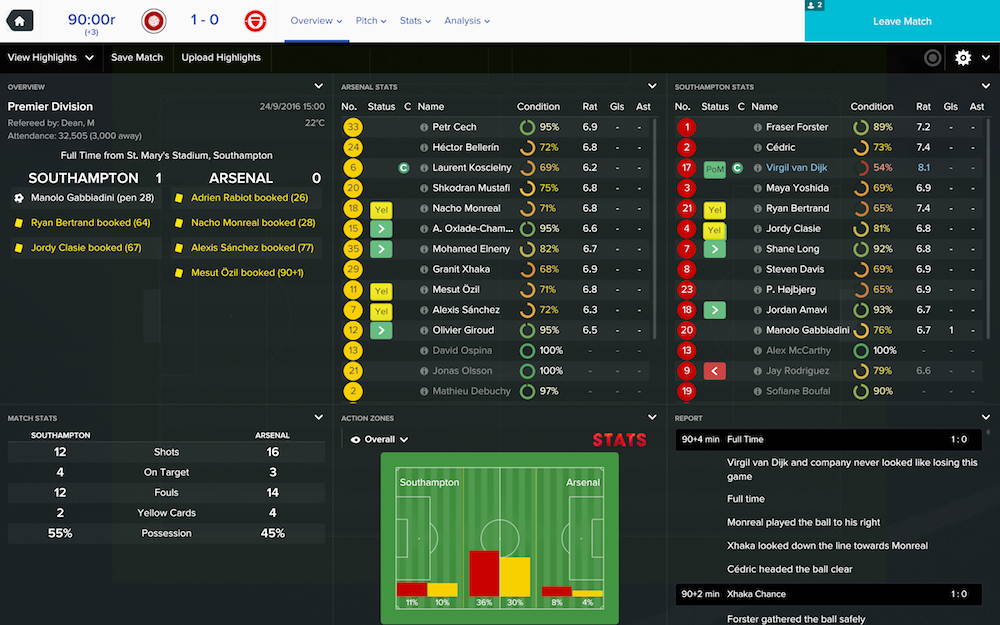 ALEX: Next up are Burnley. Workmanlike, solid, hard to break down – it’s like playing a Macintosh side again. Fortunately, we’re at home and Burnley are not great away from home and have no-one of the quality of Sanchez. I decide to go with the only tactical option I have that uses a striker, a narrow Christmas tree that uses the same solid central midfield and width from the full-backs, but advances a deep-lying centre forward ahead of an attacking playmaker and a shadow striker.

Theoretically, we should get the same sort of rotational movement from the front three, but with a player more on the shoulder of the centre-backs. I deploy Origi in this role, with Mane and Coutinho behind him; Stewart retains his place in the absence of Milner, and we are otherwise unchanged. 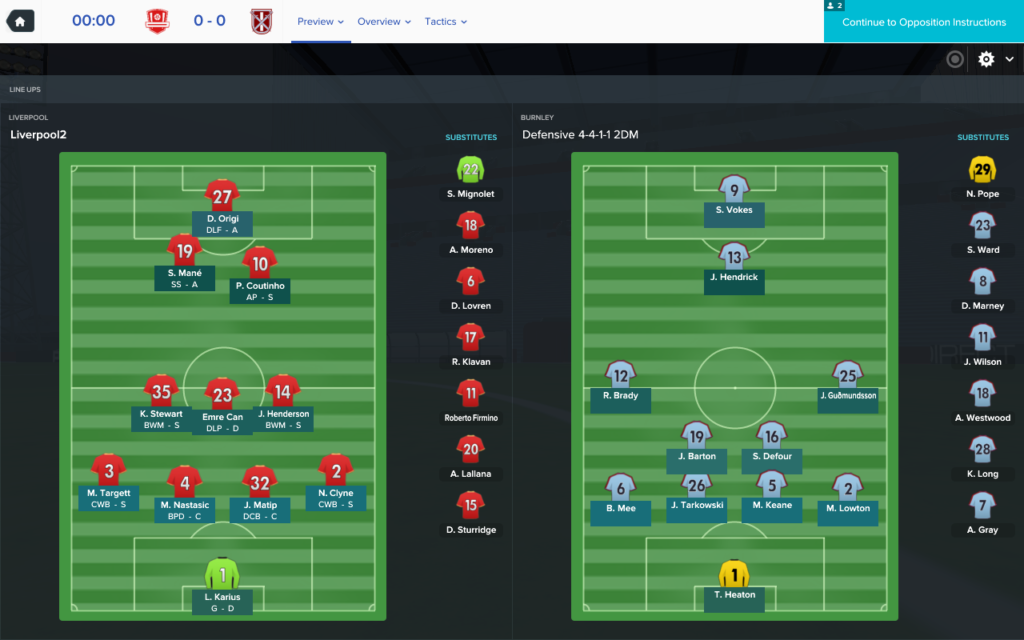 Now that was more like it: the system functioned superbly and Origi netted twice in a 3-0 win. Henderson, Clyne, Targett, and Matip were also all excellent, and we managed eight shots on target.

Origi has a penalty saved but slots home the rebound, having already scored one spot-kick; Nastasic also gets his first goal for Liverpool with a header in the fourth minute. We deny Burnley any shots on target and generally function exactly as I want: compact in the middle, width coming from over-lapping full-backs, and a front three who pose awkward questions with their movement, pace, and ability to fire in shots from anywhere.

It’s a satisfying win against the sort of side who can frustrate by sitting deep and being dull. I also notice how well West Ham have started the season, which makes my point away at theirs look a lot better. We’re in third place, unbeaten in six Premier League games, and every match brings us closer to a better understanding of the system. Yes, Iain might be a bit smug about a scrappy Cup win, but we’ve got our eyes on a bigger prize and things have started well. 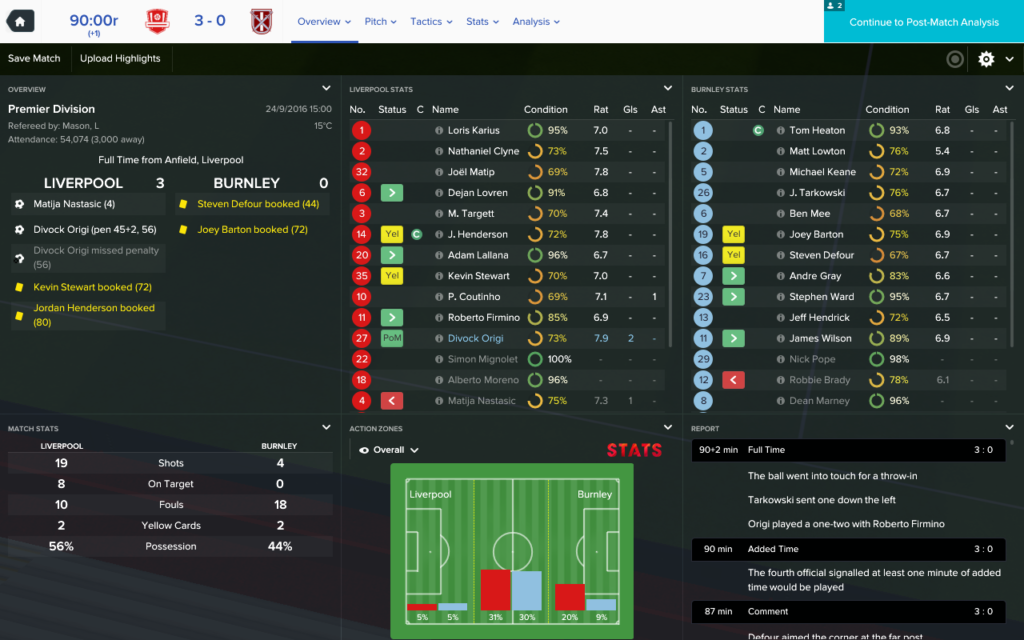 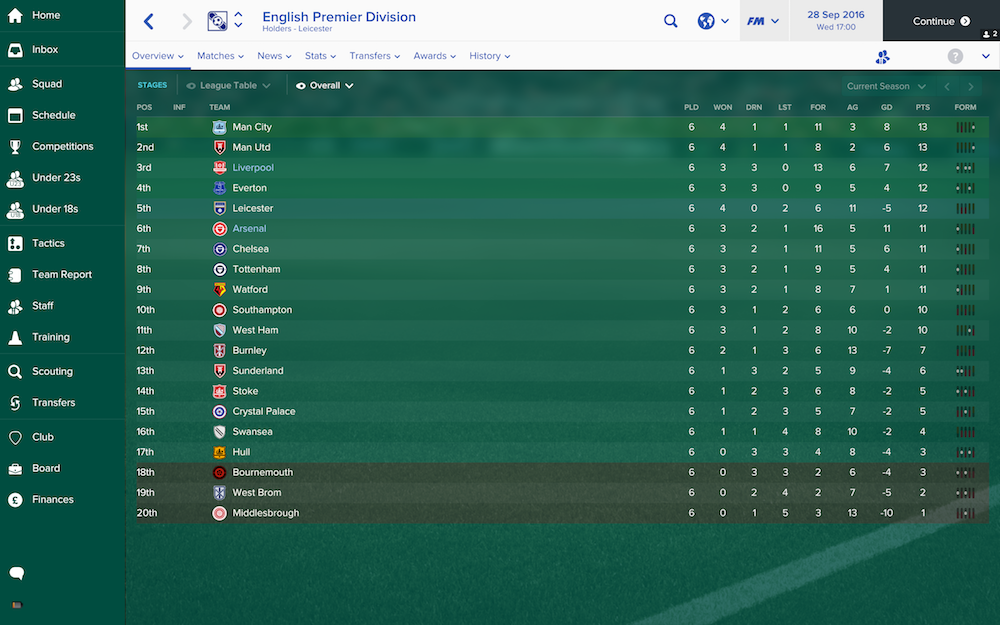 IAIN: One thing I can guarantee this season is that we won’t be eliminated in the Champions League first knock out stage by Bayern Munich. If they’re going to do that to us, they’ll have to do it in the group stage. And who would rule it out? They’re a brilliant side with no discernible weak spots and layer upon layer of quality throughout their squad. Mind you, we’ve got Aaron Ramsey. My anger at him for those stupid passes at the start of the season has abated and with Adrien Rabiot nursing a hurty ankle, he can come in off the naughty step.

We’ll try Ozil on the other wing. He doesn’t have that much pace, he can’t be convinced to cover his full-back, but he is quite good at football and maybe that will be enough. Maybe. 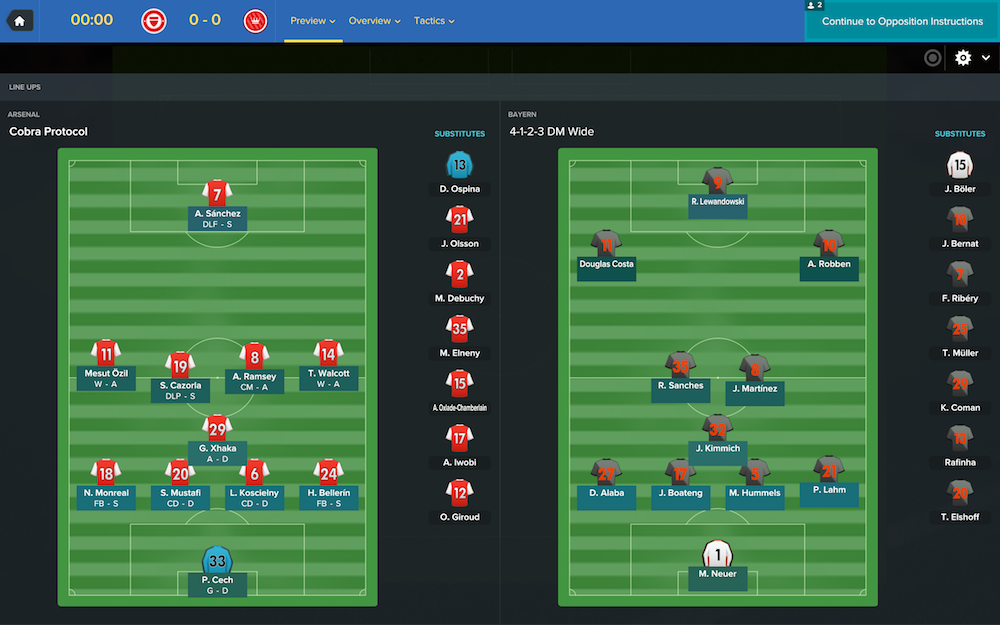 I am less than pleased. Grumpy, in fact. It’s not the result that disappoints me, it’s the manner in which it was achieved. We were excellent here, brave and bold, with chances created from all over the pitch. We fully deserved to beat Bayern tonight. And indeed we did beat Bayern tonight. I’m just a little bit upset that we beat them because David Alaba blasted the ball straight into Philip Lahm’s face, causing it to ricochet past Manuel Neuer.

That is no way to win a game like this. It makes it feel like it doesn’t count. I’d have taken a Nacho Monreal scuffed deflection above this. You can’t produce DVDs of a game won by someone hitting their team-mate in the face with a clearance. This is a lose-lose situation. And once again, Ozil was “okay”. Six successful dribbles, but a less than convincing passing rate. Harrumph. 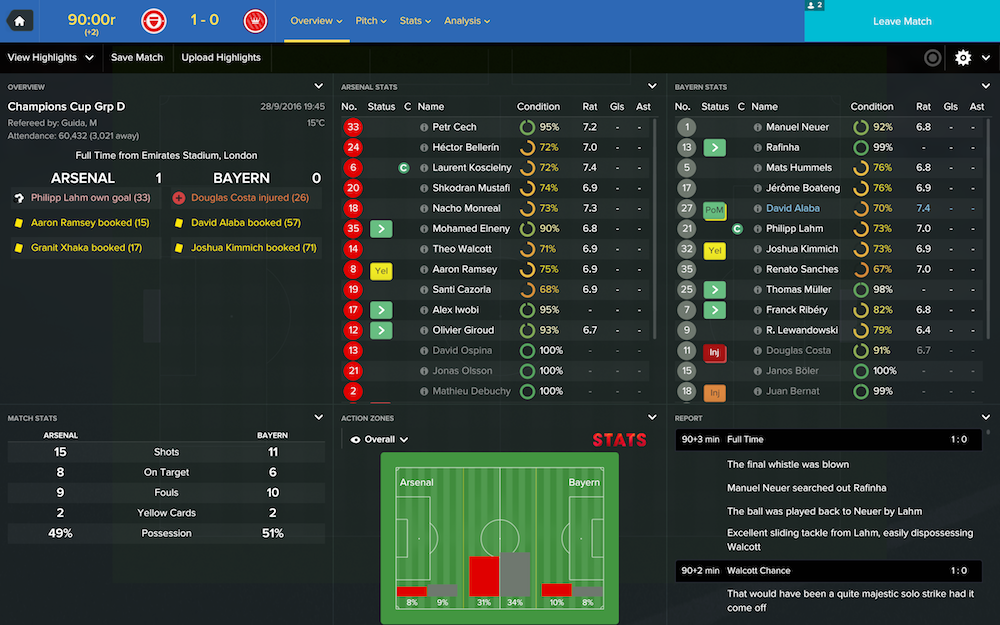 So it’s a mixed week in what is already becoming a mixed season. We’ve beaten Liverpool in the cup, wahey! We’re six points from six in Europe, wahey! We’re still dropping points in winnable league games, booo. But it’s early days. And sooner or later, I will figure out what to do with Mesut Ozil.