You might have heard by now that the new Football Manager is out on November 4. You might even have played the Beta version. From what we can see, it’s bigger and better than ever. But it’s not easy. Having wrestled with FM2015 and FM2016 with only sporadic success, we asked Iain Macintosh to seek professional advice from an expert, Sports Interactive’s Tom Davidson.

Hello, Tom. What do you for a living?

Hello, Iain. I’m the Sports Interactive football analyst. My responsibility is to create content around the database and features of Football Manager. So it could be anything from assessing how well a particular transfer will impact a club to profiling the next crop of wonder kids.

So essentially you get paid to play Football Manager all day and write about it?

Well, this is just marvellous. You see, I’ve been playing these games since the very first incarnation in 1992, the one with the angry man on the box. I’m not saying that I was ever a laptop Rinus Michels, but I’ve had my glory days. The only problem is that most of the glory was some time ago. The last version I really excelled at was FM14. I once lost a game on FM15 because the opposition had over 50 chances and the only team I could take to a second season on FM16 was Real Madrid, which barely counts. So what’s happened?

The game has changed, Iain. The days of discovering a sort of ‘one size fits all master tactic’ are long gone. You can’t just buy some good players, put them in a 4-4-2 and then keep pressing continue until the trophies start to pile up. The game is now more intelligent than ever before. Real managers can’t just pick the same team and the same tactics for every opponent. And now neither can you.

That’s the age we live in now. Everyone has access to every bit of footage. Managers are much better at assessing other team’s weaknesses. It’s all about margins. That’s what we’ve tried to reflect in FM. You have to have a core philosophy, you have to have players that fit it and you have to ensure that everyone is working to the same goal. And you have to keep your eyes open. You’re not going to defend the same way against a 6ft5in striker that you would against, say, Sergio Aguero, are you? You have to look at your strengths and weaknesses, their strengths and weaknesses, and then come up with a plan.  FM17 has a data analyst that helps with that, so before a game you’ll get a full report on the opposition and where they’re vulnerable. Use it.

So I have to change tactics every game?

Not necessarily. But the higher up you go, the more you need to adapt. You can get away with it a bit more at a lower level, but you have to remember that the AI managers and scouts all have attributes too. They will be watching your team, assessing your tactics and pinpointing your weaknesses. They will be plotting your downfall, so you need to plot theirs. Especially in the Premier League. Anyone can beat anyone there, no matter who they’ve signed. That’s the level you’re playing at, so find the margins. And don’t be afraid to tweak during the game. You can start with control, then move to attack, then defend your lead. As long as your players can handle it, the game won’t penalise you. 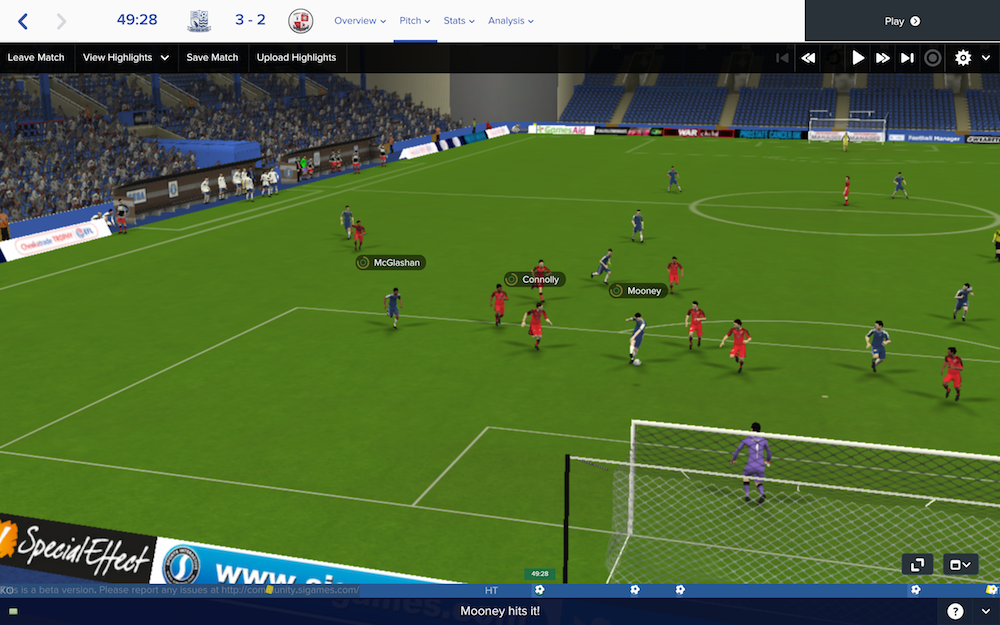 I don’t like the idea that the AI managers are watching me.

Yes, we have some of the best managers in the world in the Premier League and that’s modelled int the game. They have abilities in the same way that players do. So you are going to have to go up against tough opposition. But beyond that, the match engine is at such an intelligent state now. We’ve really focused on the defensive AI and the movement of the full backs in particular. One thing we had a lot of complaints about last year was that people felt it was too easy to get crosses into the box. Well, this year it’s a lot harder. The full backs are blocking crosses, they are more intelligent, they shift more intelligently, and that only gets better the higher up you go.

It sounds quite difficult.

It should be difficult. That’s the reality of the job. You are facing fully rounded opponents, you’re not just playing a generic set of ones and zeroes. It’s different managers with carefully modelled traits and abilities, so it should feel increasingly as if you’re standing in a real manager’s shoes. And yes, a lot of people find that difficult, but that’s the reality of the job. Hundreds of managers get sacked every year in Europe. So the game should replicate that.

Ok, so I accept that there’s no ‘magic formation’. But how about one that just isn’t bad. A sort of ‘do no harm’ formation.

Well, for starters you’d want a standard goalkeeper. If you want to keep it simple, you don’t go for the sweeper keeper.

A back four that’s all defensive?

No, I think there’s a bit of leeway here. Have the centre-backs set to defensive, but let your fullbacks support the midfield. You don’t want to isolate players, you want movement between the lines. Full backs are adept at covering every blade of grass. You don’t have to go attacking and risk leaving yourself open, but support should be fine.

I always used to have all my attacking midfielders and striker set to ‘attacking’.

Well, no wonder you’ve been struggling. It’s imperative to get those two central attacking roles, the striker and the number ten nailed down quickly. I have my attacking midfielder set to support, because I don’t want him playing off the shoulder of the striker, I want him to drop back and help out. It also means that he’ll get the ball deeper and have more options in front of him, rather than putting you in the situation of having your most creative player waiting all the way up the pitch for the ball to reach him. If your striker is comfortable on the ball, if he can pass, if he can take a man on, have him in support as well, bringing other people into the game. Again, the attacking duty can sometimes leave him isolated up top. 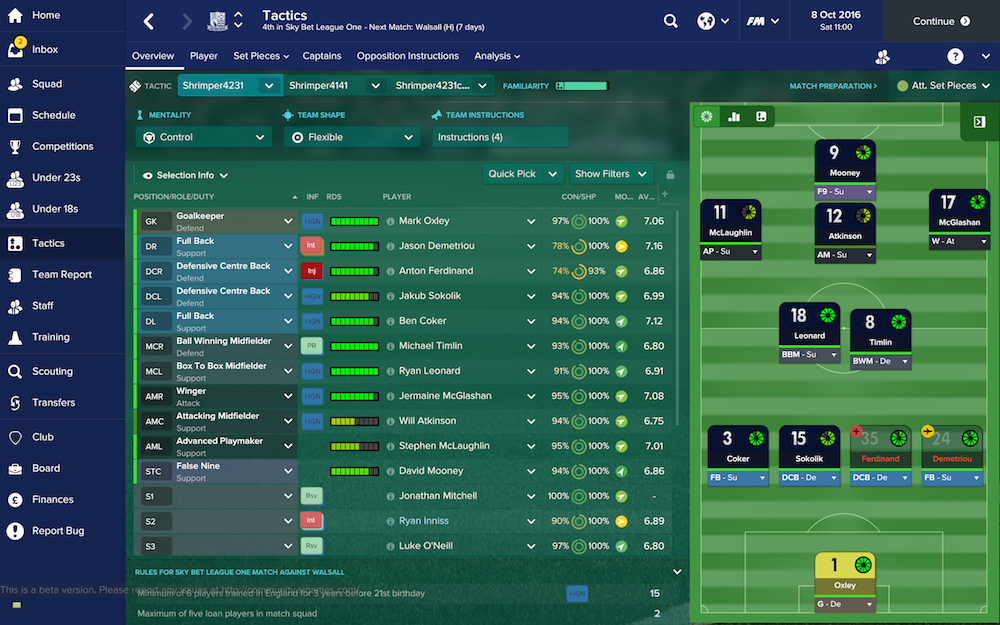 I get the impression that player roles are pretty pivotal now. Not just in what the player does, but how he interacts with others?

That’s it exactly. When we introduced player roles, it was a real shift in the way the game worked. They give you the freedom to impart your philosophy, they give you more options as to how players link up and most importantly, it’s how real managers do things. When we talk to real managers about how to implement tactics, they were saying that they don’t talk in terms of ‘central midfielders’ or ‘centre backs’. They talk about ball playing defenders, deep lying playmakers and you’re seeing those terms now creeping into mainstream coverage.

Player roles are definitely worth taking some time over. Read through all the descriptions, understand how they work and how they can fit in with the wider objectives of the team. Maybe have a read on the internet of how things work in the real world too, find real life examples. Once you’ve got that together, everything should be a lot clearer.

Yes, sometimes the headings, which are named to fit in with real world terminology, can sometimes be misinterpreted. When we say ‘defensive’, we don’t mean that you’re going to be sat deep playing keep ball and waiting for the final whistle. You’re still going to try to attack, it’s just that you’re going to be more cautious as to when you do it. It’s not like ‘contain’, you’re not shutting up shop.

There have been similar issues with ‘counter’. People think that means that you’re sitting on the back foot and doing nothing, just hoping to win a set piece. The reality is that, again, you’re still trying to attack, you’re just picking and choosing your moments. It’s like Leicester last season. They weren’t just hiding away and then smashing the ball up the field. If there was nothing on, they’d keep the ball, they’d pick their moments. That’s how we see ‘counter’ working. And again, with control, the simple clicking of that button doesn’t mean that you’ll play like Barcelona under Pep. You’ll try to attack when you can. But you still need the players. 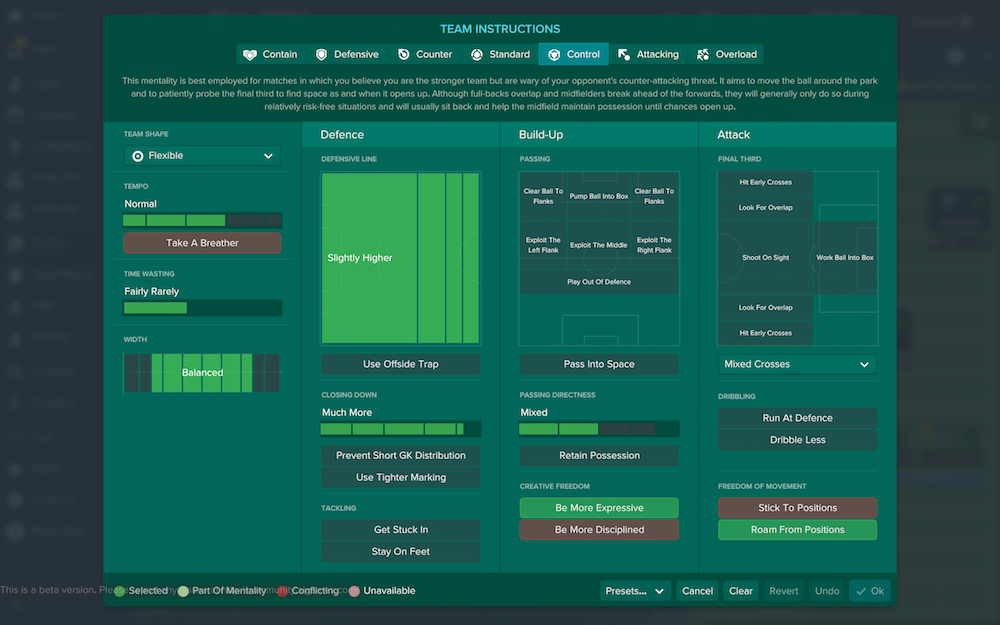 So everything, shape, personnel and mentality, it all has to link up?

Exactly! In the olden days, you didn’t have to think about this stuff. You bought players, put them in a shape and went for it. But now you have to think about your philosophy. You have to decide what you want to do. That’s what real managers do and that’s why the game is the way it is. Talk to any manager and ask them how they play and they will have a defined idea of how they set out their team. To us as fans, we’re used to just wanting to win. But FM is now asking questions: How do you want to win? How are you going to make it happen?

Once you get that and nail it down, once you realise that everything is interlinked and that your philosophy will permeate through ever facet of the game, once you give it more thought than just saying, he scores goals, he’s good at tackling, I like 4-3-3, you’ll be all set.

Thanks, Tom. I really appreciate that. Now, have you got any advice for me ahead of the new Everton challenge?

Yes. Get someone else to manage them.

Football Manager 2017 is out on November 4. All screenshots featured here are from the Beta version, available now from all the usual outlets. The completed version may look a little different. It may play a little different too. I hope it does actually because in my Southend save, Everton are in danger of getting relegated. That doesn’t bode well…