THE CATCH: The Celtic v Rangers challenge did not go well for new Dumbarton manager Alex Stewart, while Iain Macintosh is going to find it a lot tougher than his breezy spell at Celtic.

@iainmacintosh @BetBright @FM17Project for the love of god put 4 of the attacking players on support! You will see instant results

IAIN: You know, sometimes I get the feeling that you people are only ever looking to find the negatives in what we do. Arsenal are unbeaten, we’ve scored six in three, we’ve signed a very exciting young midfielder in Adrien Rabiot, and all you can focus on is the way we fecklessly tossed four points away by needlessly squandering leads against Everton and West Bromwich Albion.

But you might have a point. We’re playing well, but we can play better. We shouldn’t waste winning positions like that. Perhaps I’m asking a little too much of this lot. Perhaps having a spare ‘back three’ in my locker is a bit of a waste of time. I think we might be better having three similar, but carefully selected tactical plans, all under one philosophical umbrella.

And so with an international week opening up precious tinkering time, I’ve tweaked my three formations. Don’t worry, we’re still of the same mind. We like the flanks, we like low crosses for late runners and we like to smash you up when you’ve got the ball, but now there are three distinct…*does quote fingers*…“protocols” for improved in-game management.

Trying to aggressively dominate our territory against Leicester, however, even at home, would be stupid. It’s the very reason that Leicester won the league last season. Jamie Vardy has a pace of 18, so there’s no question as to the tactics we’ll be using here. Activate: Cobra Protocol. 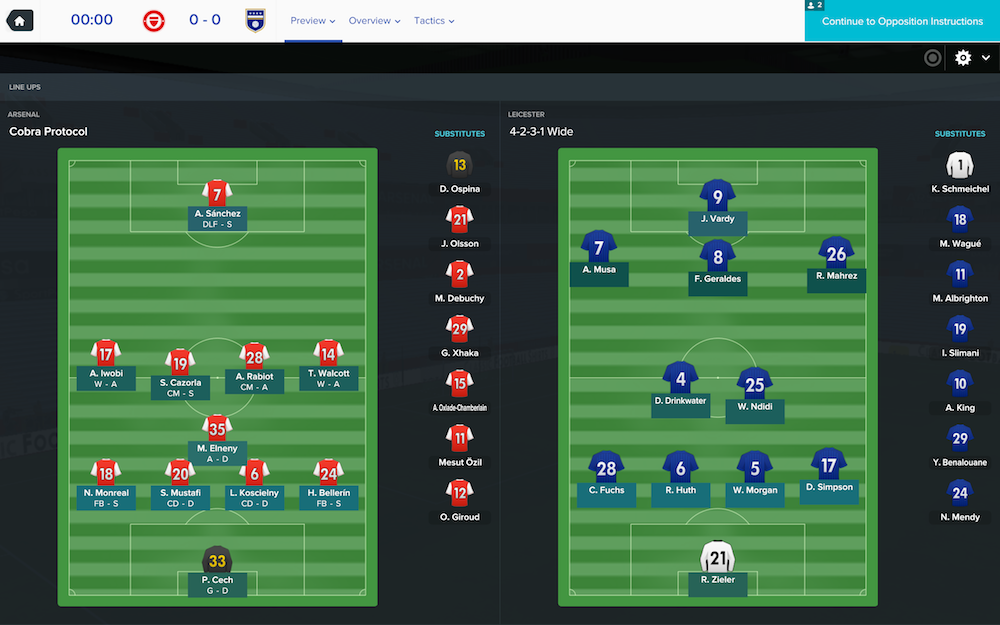 Please, take it. Inside is a photograph of my naked bottom. 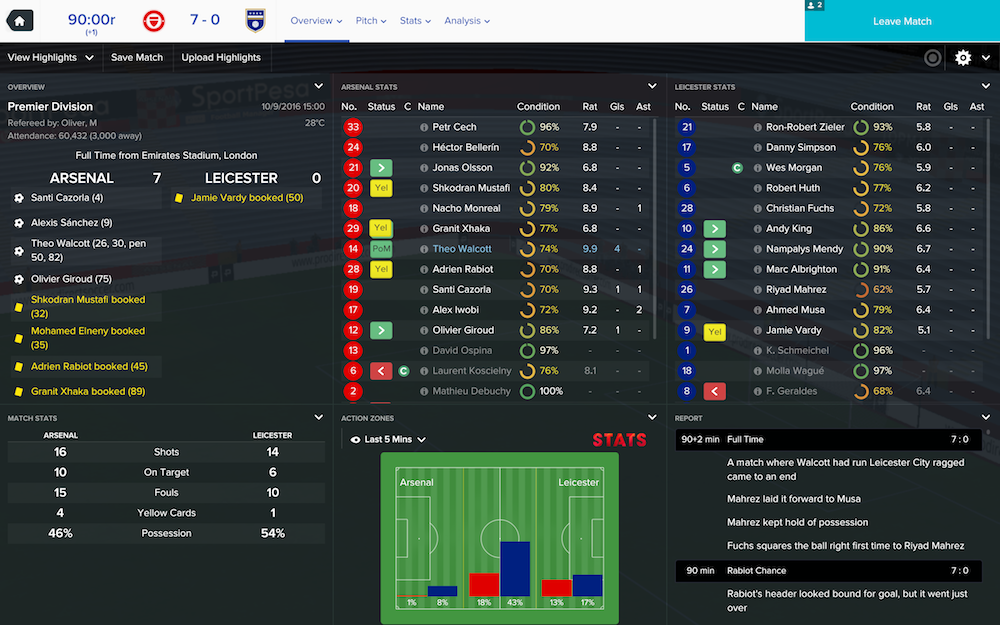 ALEX: Top of the table isn’t a bad place to be, but nothing is taken for granted at my super-slick, data-driven Liverpool. We can sit back and luxuriate in some success for the time being, though, as I win the Manager of the Month, and Jimmy Milner comes third in the Goal of the Month contest. There is no word on whether anyone from Liverpool made it into a Garth Crooks team selection, though.

The plaudits keep coming, as Aitor Karanka congratulates me on my achievements at Liverpool so far, especially the Manager of the Month accolade: “He’s one of football’s finest,” he says, “No one deserves it more than him.” Karanka is one of the good guys, and I say as much, but I’ve a weather eye on this ‘Boro side, our next opponents, and their compact, defensive outlook.

We are forced into changes: Matip and Nastasic are both exhausted after international duty and midfield dynamo Jordan Henderson needs a rest too. Fortunately, Milner is fit again, so he comes in for the skipper, while Lovren and Klavan come in to play centre-back. It’s not ideal, playing without three first choice players, especially with two of those being my centre-backs, but it’s only ‘Boro. 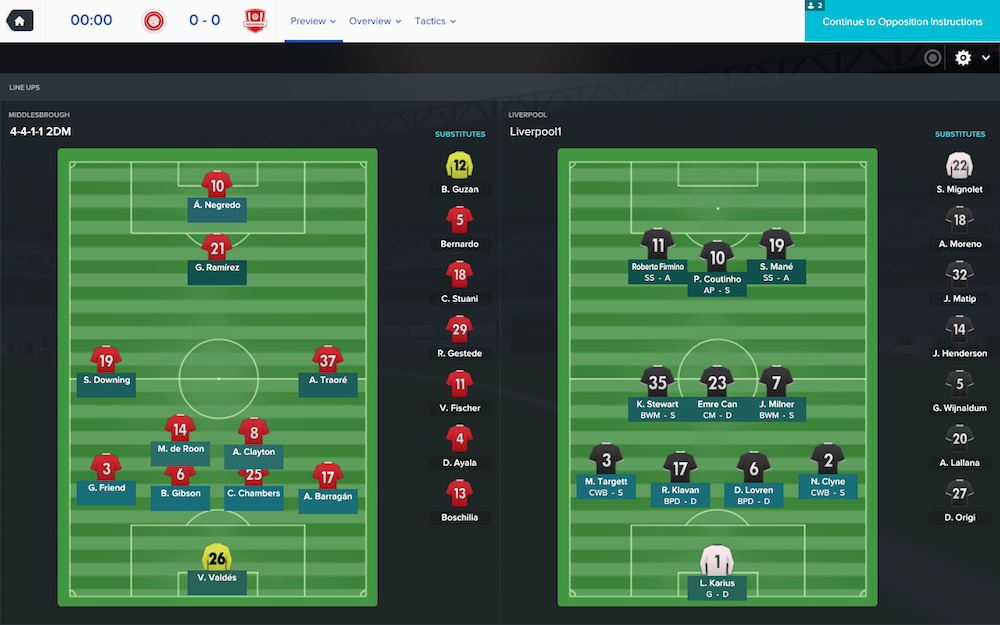 Liverpool aren’t good against poor teams that sit deep, right? I’m sure I read that somewhere. I’m also pretty sure I heard that there are no easy games in the Premier League. And so it comes to pass, as we struggle to break down what I could charitably describe as a 4-4-1-1, but is actually more of a 6-2-1-1.

The first half sees us dominant but unlucky, and Negredo hits us on the break. After 15 tawdry minutes of the second half, with the score at 1-0 to the hosts, I haul off Coutinho and Firmino, bring on Lallana in the play-making role, and stick Origi upfront as a deep-lying striker, which is tactical variation 2 for those who are interested.

We start to attack more as Middlesbrough revert even further towards their own goal, and Origi pounces on a Lallana through ball to make it 1-1. With 25 to go, De Roon is sent off for a second bookable offence. But ‘Boro sit and sit and sit and try as we might, we cannot find the breakthrough. To make matters worse, Iain records a 7-0 win against Leicester. “Feeling pretty smug now,” sings Iain, in a statement of the ineluctably obvious. 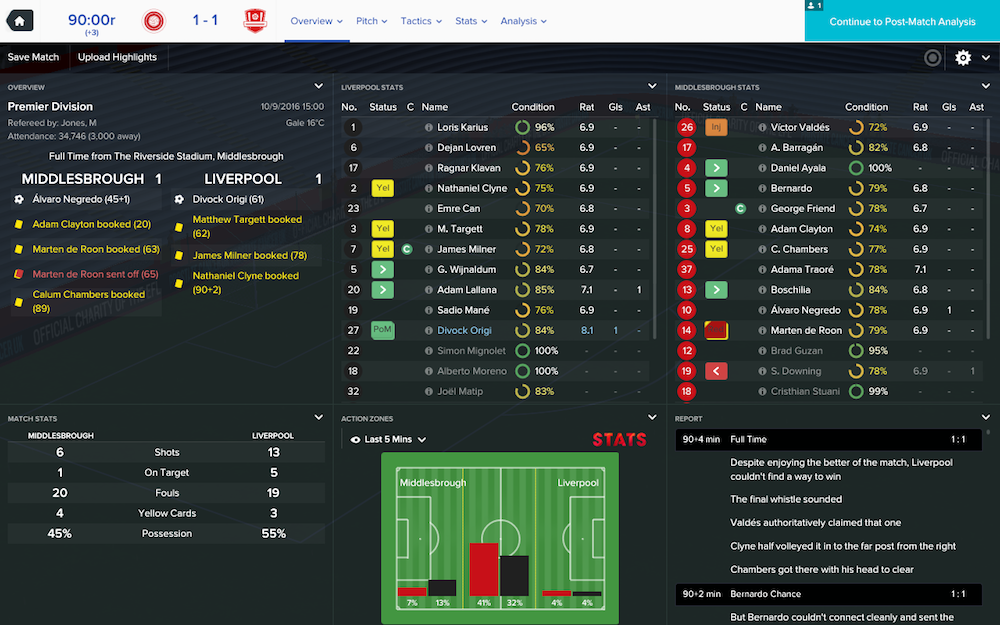 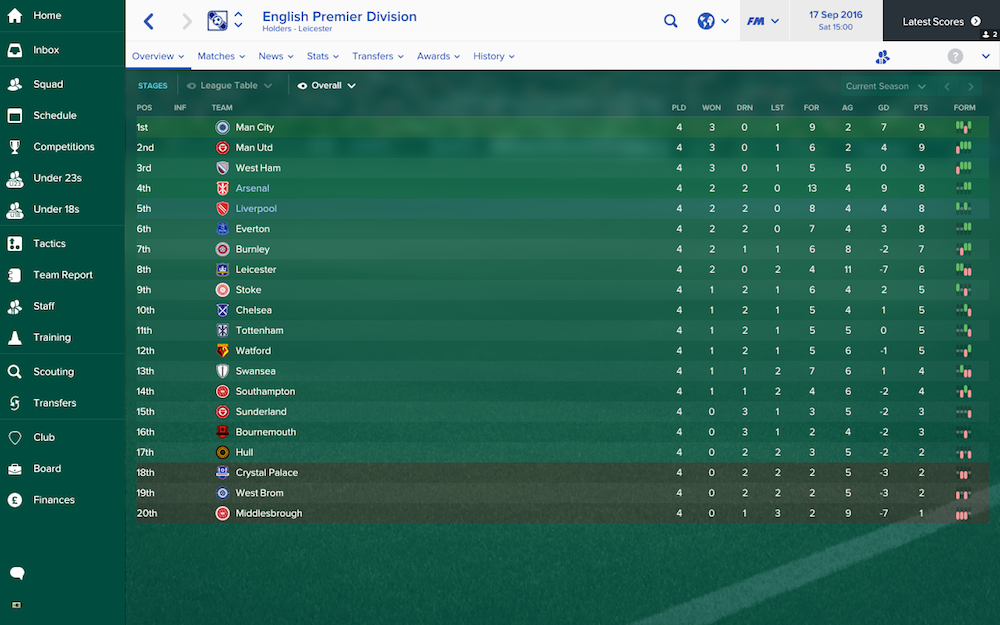 IAIN: After a result like that, I really can’t make too many changes for the start of our European campaign. I think poor Theo Walcott would spontaneously combust if I dropped him now. Sporting are a thoroughly decent team and I’d prefer not to be opening up the Champions League campaign with an away trip, but confidence is high. We’ll keep to the same team and, given that we’re away from home, the same Cobra Protocol. 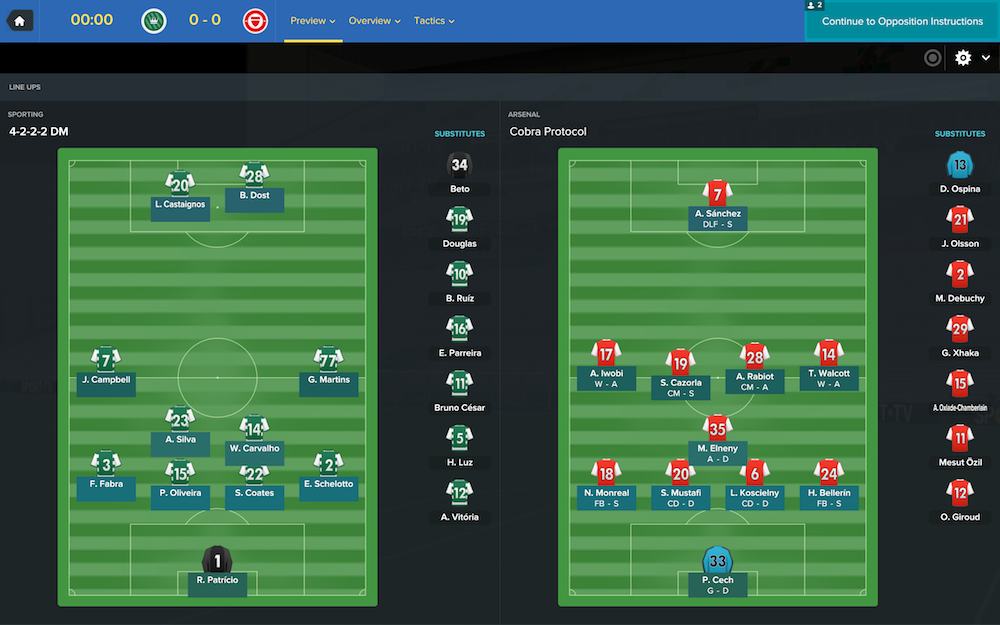 I’m a little perturbed from the first whistle when it becomes apparent that Sporting are playing two deep-lying defensive midfielders, a system that tends to neutralise the 4-1-4-1 through simple weight of numbers. However, Alexis Sanchez doesn’t believe in numbers. You can tell him the odds, by all means, but he’ll just stick his fingers in ears and start singing about his dogs. He nearly scores after 11 seconds and then he actually scores after five minutes. After that, I’m more than happy to dominate the midfield until such time that Sporting decide they want to come out and play.

When Alex Iwobi smashes home a second after the break, they shakes themselves into life, pushing men forward. I give my lot ten minutes to see if they can exploit the space left behind and then switch to Castle Protocol. Sporting never get a sniff of my penalty area and then, just to rub salt in their wounds, Sanchez hits an absolute worldie to make it three. I think I love him. 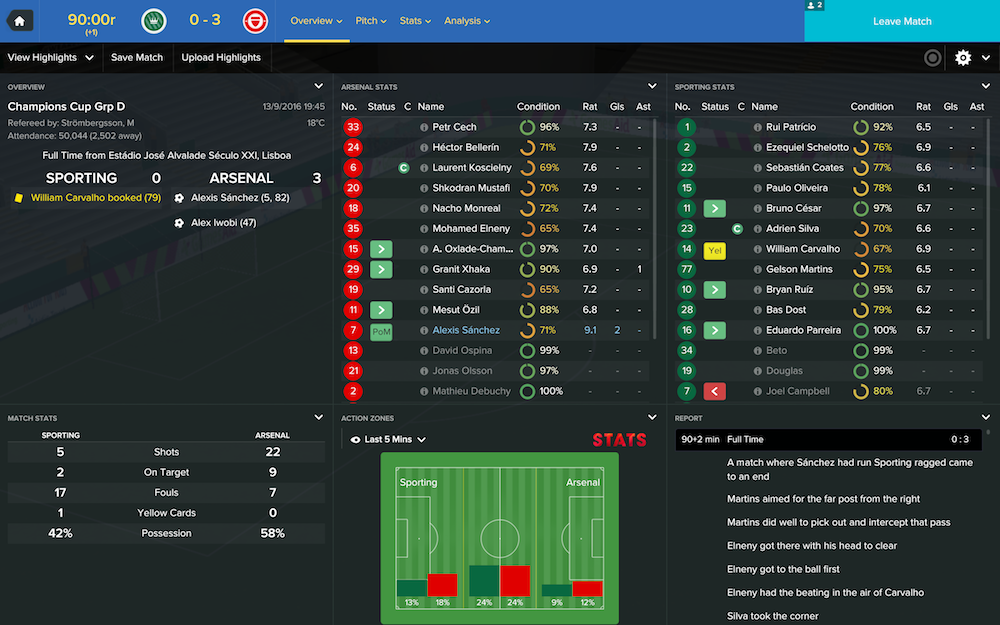 ALEX: The Board are satisfied with me, but naturally the fans are disappointed with the draw at ‘Boro, as am I. I suspect that we need to use a striker against those sorts of sides from the off, and Origi is proving himself to be a great option, despite not being a natural shadow striker.

Up next are West Ham, a more attacking side, playing a 4-2-3-1, and so we stick with the 4-3-3. Henderson, our best player so far with a 7.58 average, comes back in, as do Matip and Nastasic. I think Calleri will look to drop into space, and so I ask that Matip steps out a bit to counter that threat.

We’ll play on the counter again, and hope that West Ham come forwards so we can pick them off on the break. I decide last minute to bring Origi in for Coutinho, as I think he offers a goal threat that my other players haven’t mustered yet. Coutinho looks grumpy. 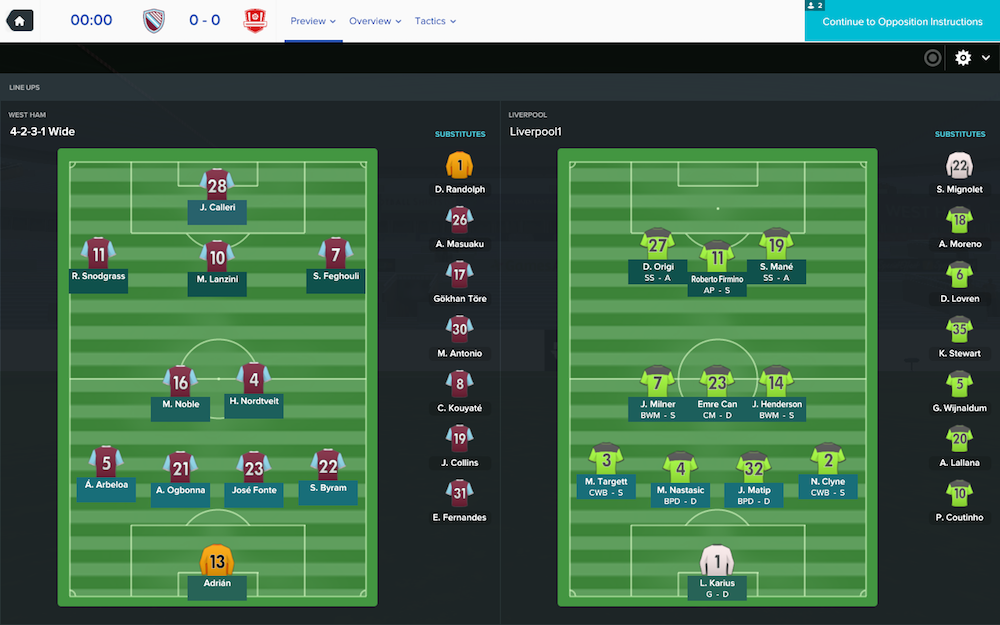 Another late goal, another let down. Origi rewards my faith with his third goal in four PL appearances in an encouraging start. We produce a lot of chances with this formation, but again, Mane’s finishing lets us down. We’re best when breaking at pace, as we do just before half time, when a lovely move culminates in Milner’s shot forcing a superb stop from Adrian. From the resulting corner, Milner fly kicks in another shot, which Adrian saves at full stretch. The pressure tells, finally, as Origi gets his second.

Midway through the second half, however, Calleri finds space and pulls one back. I’m not concerned, and we look to be on course for three points until Snodgrass finds space between Matip and Nastasic. It’s the second minute of injury time and I am livid. Apoplectic. Furious. I’m so angry, I set my thesaurus on fire.

We are still unbeaten, though, and only three points off the top after five games. I must also remember that my squad is young, adapting to new tactics, and the form of Henderson, Origi, and my new signings has been very encouraging. 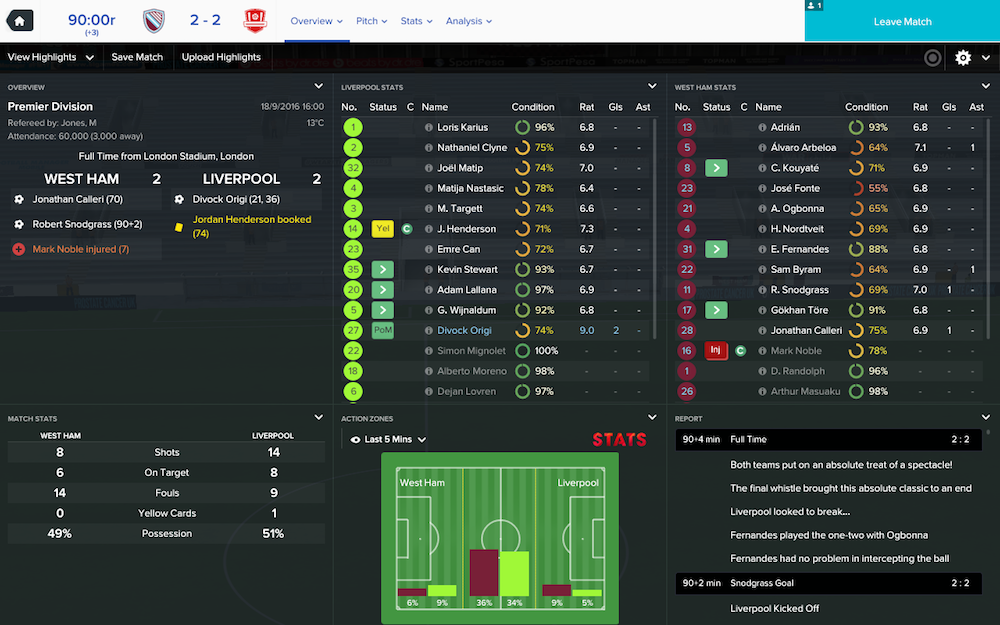 IAIN: If we squandered the chance to put down a marker against Tony Pulis’ Baggies, then let’s take the opportunity to show off against Stoke City, eh? It’s time to give the Grizzly Protocol an airing, with Mesut Ozil, now fully recovered from injury, in the hole behind Sanchez. I want us to impose ourselves on this game. I want to teach them a lesson.

However, let’s not get completely carried away. With Saido Berahino up front, it would be wise not to push the defensive line too high. I also want to try to get the ball to Iwobi on the left as much as possible, not because I’ve fallen out with Walcott, but because cursory analysis of Mark Hughes’ side shows that Glen Johnson likes to get forward all the time and I expect him to leave gaps. I bloody love gaps. 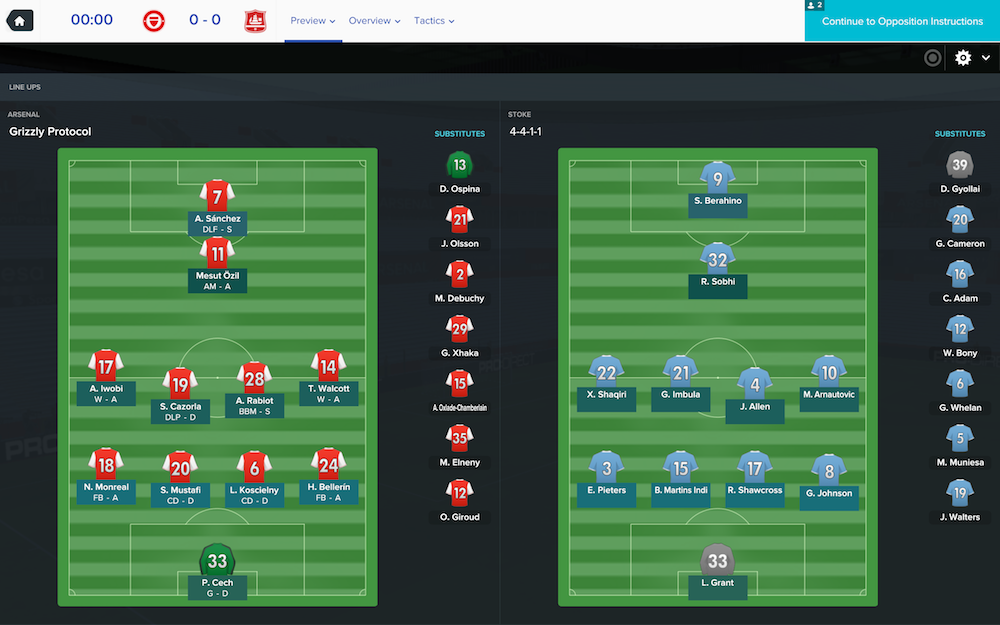 Ooooh, that felt good. We didn’t swipe Stoke off the table. We just put our finger in the centre of their chest and pushed and pushed and pushed as their legs whirled and their feet skidded and we kept on pushing until they ran out of table and fell to the floor with a squeal, shattering into a thousand pieces.

Sanchez scored the opening goal, racing onto a low cross from Walcott, Santi Cazorla added one from the spot before the break and then Sanchez, impetuous, wonderful Sanchez, ran onto a lofted ball from Rabiot and nodded over the oncoming Lee Grant for number three. I thought I was spoiled with Moussa Dembele at Celtic, but you know what? I think Sanchez might be the better player. 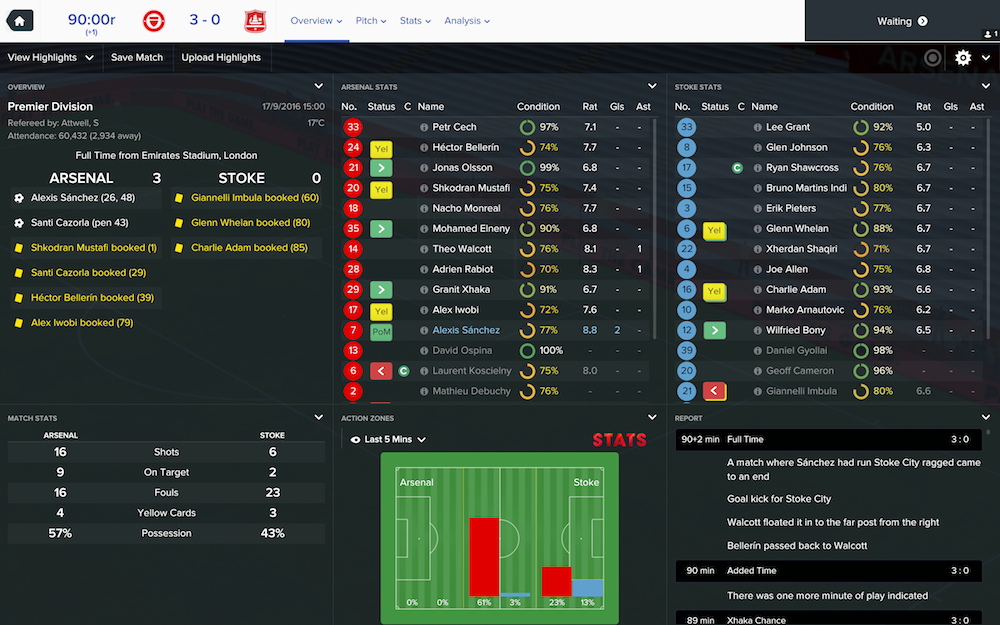 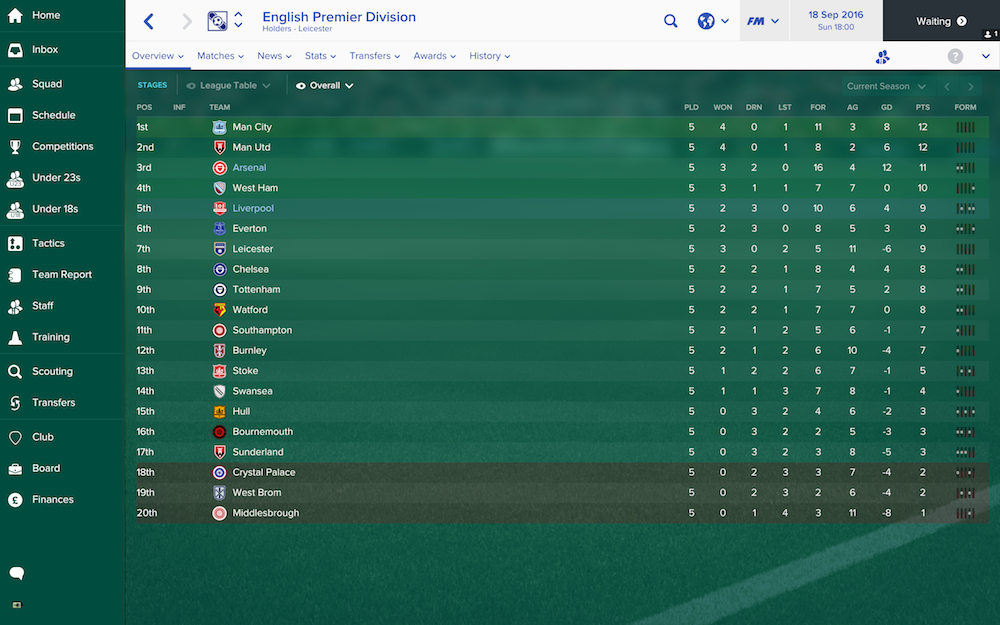 IAIN: So in three games since we initiated… *does quote fingers*  …the protocols, we’ve won three, scored thirteen and conceded none. I would say, on balance and after consideration and reflection, that tinkering was probably a good move.

ALEX: Next up are Iain’s Arsenal, currently in third and two points above me. It might be the EFL Cup, hardly a priority in anyone’s book, but taking on Iain makes it a grudge match. He’s playing well and has been getting the best out of Sanchez (easy) and Walcott (much, much harder) – it’ll be a tough assignment, but I think we’re ready. We had better be.