THE MISSION: Return to the world of FM17 and restore some professional pride after being sacked by Rangers and then leading Dumbarton into League One.

ALEX: In Taboo, the overwrought drama recently on our screens, Sir Stuart Strange, mottled and furious, yells at the screen, “It’s about revenge!” He’s onto something, you know.

As motivating tropes go, revenge is up there with lust and greed and, to be fair, with Millie alongside me, I’ve got both of those covered already. So, who is on my shit list? Rangers, obviously. Celtic, too, though less so because they’ve had to put up with Iain and that’s punishment enough. Ayr, well I really loathe Ayr – they dumped me out of the Championship. I could probably include elements of the Scottish FA, the press, Twitter, Facebook, Millie’s overbearing Dad, and a few more besides, but my sights are set firmly on the following: get back into the Championship at the first time of asking; annihilate Ayr anytime I play them; and then progress, up into the Premiership, and take the crown from whichever of the duopoly are wearing it.

Stewarts clearly not welcome at this club. https://t.co/LNhvfQmegJ

It’s not going to be easy, mind. Fifteen of the first team squad, including every single regular starter, are out of contract come May 31st and none of them want to sign a new deal. Now that’s confidence. The Board want me to get to the promotion playoffs, the fourth round of the Scottish Cup, and the third round of the Scottish League Challenge Cup. To do this, we have £9k transfer funds and £1.4k in the wage budget.

I manage to convince a few lads to stay: Darren Cole, the centre-back, and Frazier Wright, the centre-back and youth coach, both sign new deals, as does striker Amadou Kassarate. They are joined by Ryan Clark, a promising winger, and Mark Brown, the 36-year-old former Celtic goalkeeper. I’ve not really got an option where Brown’s concerned, as we’d otherwise have no one to play in goal. 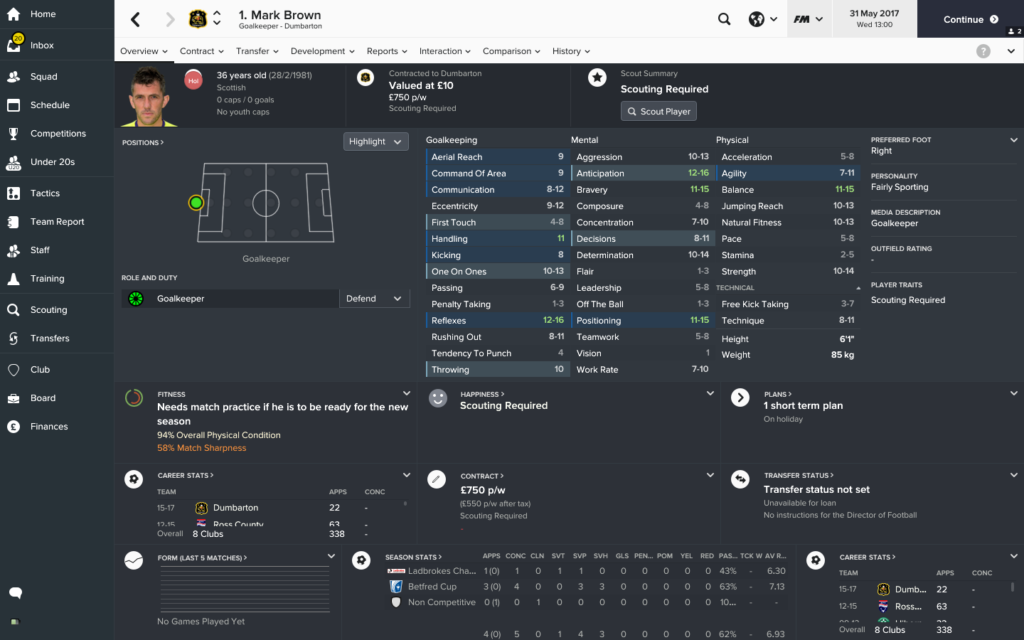 I need new players if I’m to field a full side plus seven subs, and so I need to find someone worth signing. Scouts Matty Robson (£110 per week) and Rab Douglas (£90 per week) are brought in to help with this task and get straight to work, throwing a weather eye across any player whose contract is expiring and who has averaged 7.00 or higher in the past season. It also transpires that Douglas is a former Scotland international and something of a legend within the game, and so I get plaudits for adding wisdom and experience to my backroom team.

I also add Grant Holt, the former Norwich striker, to my backroom team as U20s manager. He’s a great attacking coach and costs only £300 per week and will assist my general ethos of developing young players. 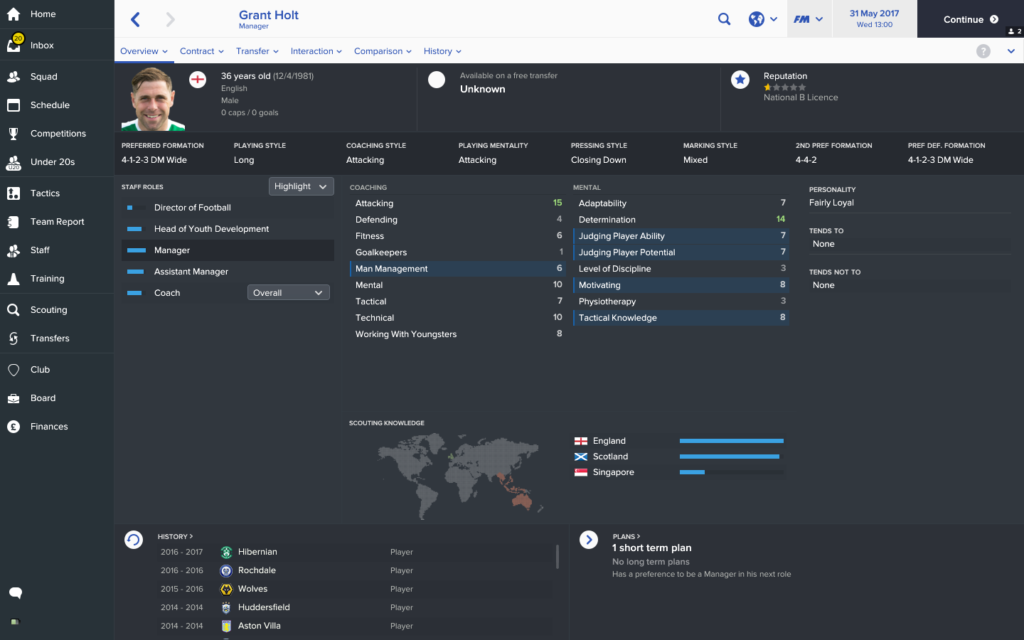 Dumbarton are so in debt that we can only retain 30% of any transfer revenue, and that’s an increase due to my good wage budget management. We have sold £477 worth of merchandise overseas. This poses more questions than I care to ask right now.

My Honest Men voodoo doll works as Ayr are relegated in the play-off. Good – we will get the chance to play them again and start working our way down the list of vengeance. Celtic see out their Treble-winning season under the leadership of Lucien Favre, after Iain Macintosh mysteriously stepped down and retired from football with just a handful of games to go. Stanger, by the way, is still at Rangers, and doing well. I am genuinely pleased for him. He is perhaps the only one who knows just how poisoned a chalice that job was.

May 31st comes and my squad is down to 16 players. That’s it. The upside is that I now have an additional £4k per week in wages to play with. The downside is that one of my two goalkeepers is 36, and the other is 16. I have no left back at all. I have two centre-backs, and one of them is 37.

So, I get the chequebook out. I assume it’s a chequebook, anyway. Millie handles all that stuff. Just before we start to sign some deals, I notice a large delivery of brown envelopes, and Millie struts into work with a new Michael Kors bag shortly after concluding some ‘business’. Anyway, we sign Angus Beith, a 21-year-old deep-lying playmaker from Hearts for £8k and £375 per week. He’s a five star prospect, four star currently, and will anchor the midfield. 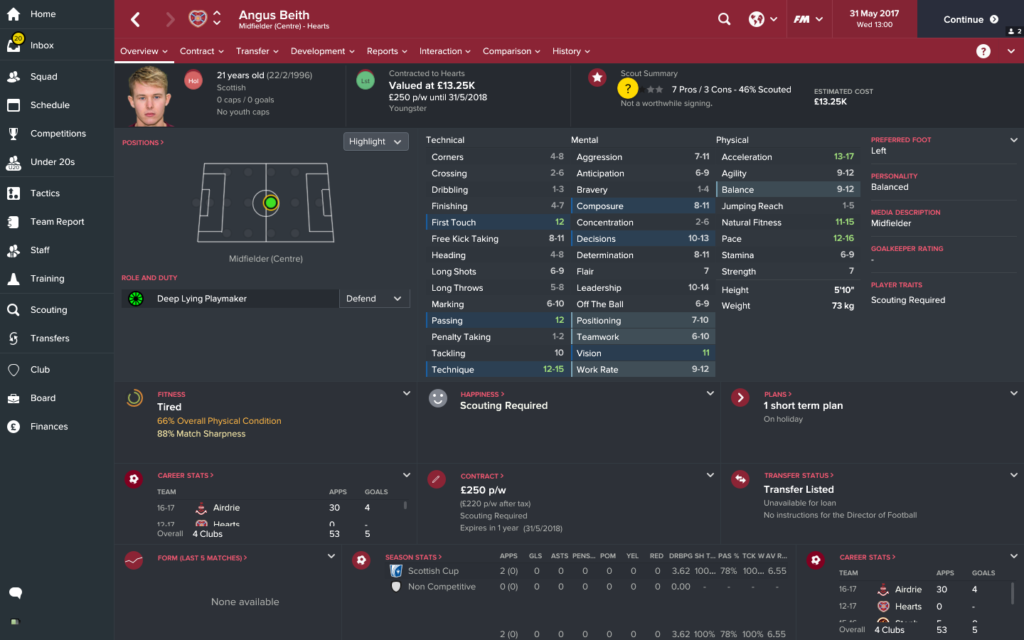 Jamie Install, a four-and-a-half star striker, joins for £3k from Hibernian; he will also cost £450 per week. Matthew Aitken is another attacking midfielder, bought from Forfar for £2k and £230 per week and potentially a four star player, and Darren Lyon adds bite to the centre of the park, coming from Hamilton for £.46k and £400 per week. Lastly, around four weeks into the season, Max Currie, a 20-year-old ‘keeper, joins from Stranraer for £17.25k and £110 per week: he’s a five star prospect and, having not learned one iota from the McCrorie fiasco, I throw him straight into the first team after ageing Mark Brown blunders once too often.

And I dip into the loan market as the season approaches: Mark Stowe, who looks like a child, is signed from Falkirk: he’s a three-and-a-half star attacking midfielder who could develop into a five star player and will only cost £100 per week, with an optional future fee of £50k. I also strengthen at the back with Dundee United’s Jassem Sukar and Hamilton’s left-back Scott McMann for a combined £240 per week in wages. 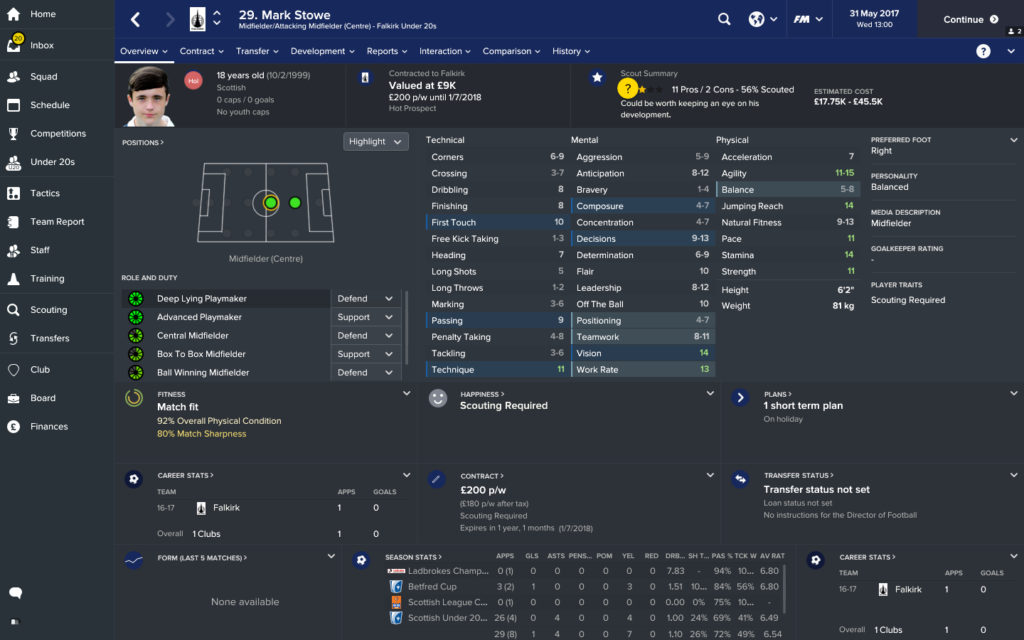 The squad now has some strength, but there’s very little depth. Tactically, we go out on a limb (would you expect anything less from me?), with a 4-3-3 that features no strikers. It’s a high press, quick tempo, short passing extravaganza that resembles something Klopp would try, just probably not with a semi-professional side in the third tier of Scottish football.

We start the season with the group stage of the Betf…BetBright Cup and finish third in our group, but suffer upsetting losses to Falkirk and Hamilton. We don’t qualify and things go from bad to worse with an opening day defeat in the league away to Brechin. But you know what? I’ve learned from my Rangers tinkering, and I stick. I’m retraining players to fit the system and praying that Darren Cole doesn’t get injured, or my centre-backs will be 37 and 19, but I have faith. You’ve heard that before, I know. And such is my confidence that sometimes even I, in my FM dark-night-of-the-soul moments, worry. 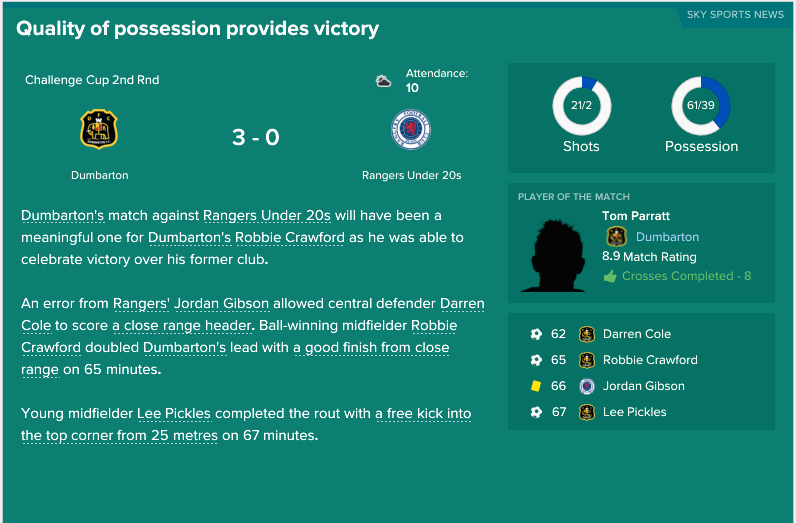 And then I win seven games on the bounce, including two Challenge Cup matches, scoring 18 and conceding three. A draw against promotion favourites Livingston away does little to dampen the enthusiasm, and we then hammer Albion Rovers at home. After eight league games, we are top with 19 points and a goal difference of +12. I celebrate by hiring a Data Analyst.

Eight turns into nine as we beat Ayr 3-1, gaining some measure of revenge. Beith scores his first of the season, McCallum his 11th (despite being a striker playing as an attacking midfielder). September finishes with us sitting top of the table with 25 points and all three places in the League 1 Player of the Month filled by Sons – plus McCallum and Stowe finishing first and second in the Young Player of the Month. Oh and I win Manager of the Month for the second month in a row. 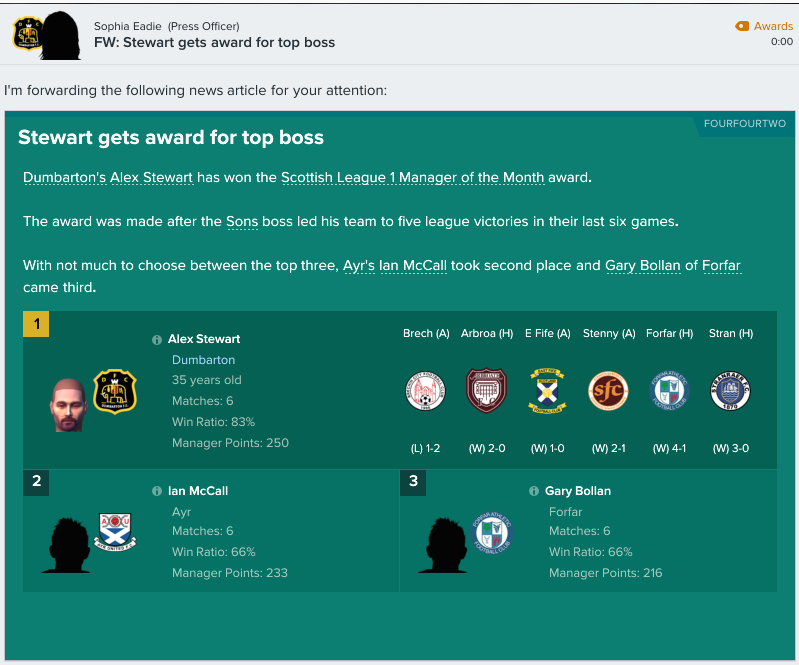 We’re still haemorrhaging money, though, despite underspending on wages by nearly £2k per month, and the Board tell me they can only let me have 10% of any transfer fees received. We finally lose as well, but it’s to Championship side Dunfermline in the 4th round of the Challenge Cup – getting to that stage has exceeded expectations and, really, our focus is on the league and promotion.

With 10 league games played, we sit top with 25 points. We’ve scored 25 goals and only conceded seven. My new signings are doing well. Can we maintain the momentum? Can we leap back up the leagues? The Sons have started well, but it’s not over until we’ve wiped the smiles off some faces and got our revenge. I’ve tapped my inner bastard again and Dumbarton are reaping the rewards. 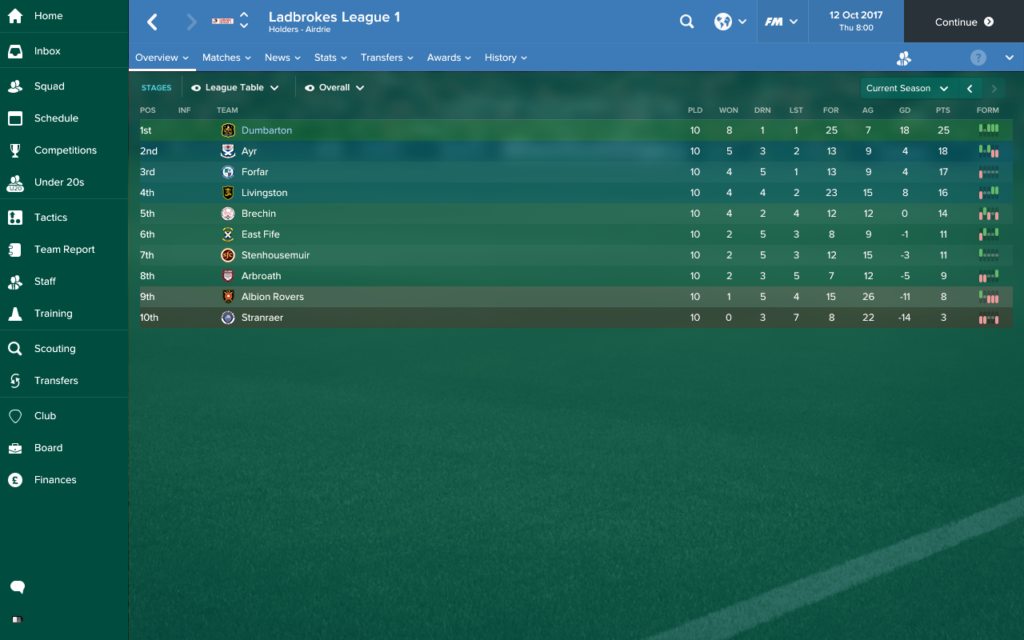 If you know you can do better, then join us for the BetBright FM17 Cup. We’re hosting a UK-wide tournament in April and want you to take part. There’s £5,000 on the table for the winner.