I’d never been sacked before, although as someone wittily pointed out on Twitter, that’s the FM equivalent of telling a girl that this sort of thing has never happened before. It’s not a big deal, they say. Well, it is. They both are.

@FM17Project @AFHStewart @thesetpieces "I've never been sacked before" The FM equivalent of telling that girl "This never normally happens."

Regardless, my sacking did come as a genuine shock. I’ll be the first to admit that my form this season has been poor. When we won, we won well and, at times, big: the 5-0 against Dundee, achieved with my fabled Catenaccio, is still the league’s biggest victory this season.

We also dominated games that we failed to win, never more so than in the last, scratchy month of my tenure. You tell me how teams that manage around 600 passes, 60% possession, and between six and 10 shots on target per game for five games in a row can only win three of them? You tell me that, and I’ll tell you about this game. This damn game, that inveigles its way into your life with the promise of riches and glory, only to take a massive, cruel public shit on your head.

Where did it go wrong, then? I’m not going to blame others, though I have no doubt that the Rangers board’s pre-season expectations of winning the league are utterly, absurdly hubristic. Did I think we could do it? No, at no point – the Celtic squad is far, far stronger, especially once Iain had realised that Kristoffer Ajer was lurking, previously unnoticed in the youth squad.

While our wage budget was the second largest, £20k per week of that was for Joey Barton. Players like Waghorn, Senderos, Hill, and Kiernan just weren’t good enough. My signings, Poyet especially, did well, and there is a core of young players like McKay, Dodoo, Rossiter, and the McCrorie brothers that will all make very good players, but a manager needs time to develop them.

IAIN: Like everyone else, I’ll always remember where I was when Alex Stewart got sacked. I was sat next to him saying, “Oh, mate.”

I know that we’re supposed to be enemies, but it was never like that with Alex and I. We both knew that our bottoms were in the bacon grinder. There was a camaraderie there. We both knew that in any given game, only a win would be considered an acceptable result.

@FM17Project My man @AFHStewart may have been sacked, but at least he's not paying Kolo Touré 5.75k p/w to play for Granada @iainmacintosh ?

Alex fought like a dog to put up a title challenge, shifting from conventional to unconventional and back to conventional tactics. Alas, it was to no avail. But I think Rangers will benefit in the long term from his sharp eye for a player. Diego Poyet and Federico Macheda were excellent acquisitions and it will be hugely frustrating that he was never able to use Gedion Zelalem.

Perhaps history will prove a kinder judge of Alex’s abilities than the Rangers board. Nevertheless, I’m sure that he will be back before long, scientific calculator in hand, ready to restore his reputation. Don’t write him off. 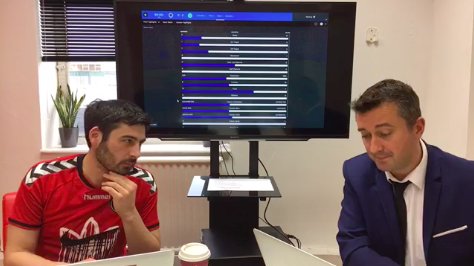 ALEX: Did I change tactics too much? Probably, but then I was trying to find ways to counter the lack of pace in defence and maximise the attacking potential of my full-backs without leaving myself vulnerable to a counter. Every change had its reasons, even if they weren’t immediately apparent. I find that FM17 adapts quickly if you maintain the same formation every game – there’s a fine line between adjusting for the opposition and tinkering too much (just ask Iain), and it’s a line that I probably crossed.

But I can’t stress enough that I feel the sacking itself was vicious and ill-timed. The team were starting to play well, and when you’re dealing with a squad with basement-level morale, time, results, and momentum are crucial. The home loss to Inverness was the killer blow and I will maintain to my grave that we should have won that game.

The board, when they acted, acted with horrible ruthlessness – I was genuinely still planning my tactics for the Aberdeen game when I found out I’d been sacked. One more game, one more point – would it have been enough? I don’t know, but I do think that if I’d had just a month more with the 4-3-1-2, we would have closed the gap and done well.

Still, onwards and upwards. There are vacancies in the Championship. Raith Rovers look tasty. I have faith that my data-driven approach will work somewhere and a team other than Rangers would be a better fit anyway. I need to build something. I’ll be back and, meanwhile, I’ll be keeping a close eye on how Iain’s Celtic are doing and the new Rangers manager’s results. Give me a season, and I’ll be right back up there with them. Revenge is a dish served very cold, with over-lapping full backs. 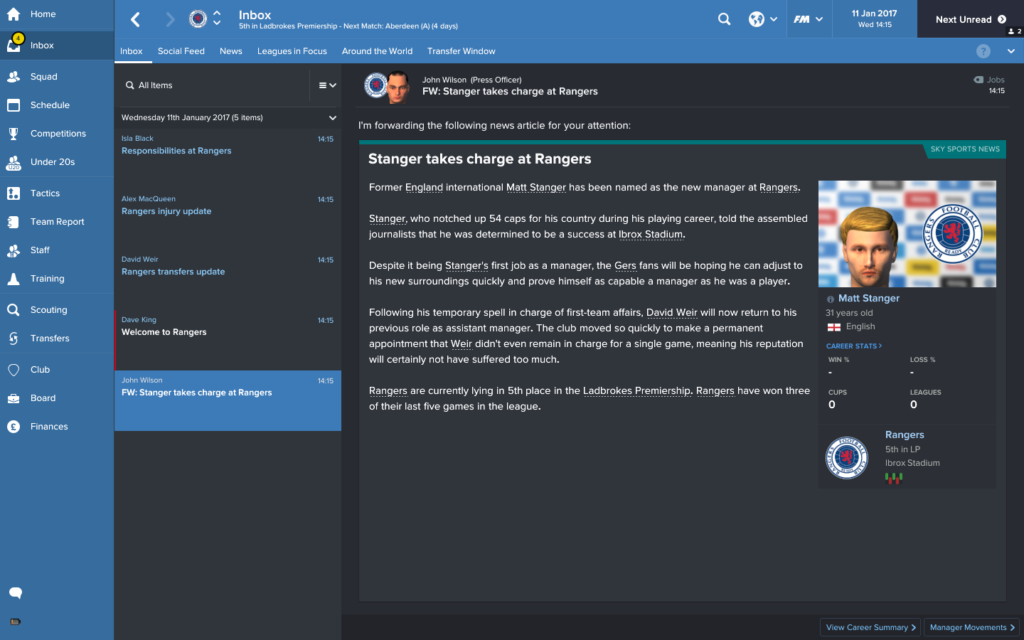