IAIN: Having driven Celtic’s snout deep into UEFA’s cash trough, I feel rather better about life in Scotland now. Qualifying for the group stages of the Champions League was one of the key targets for the season ahead and it’s been achieved with what would appear to be a degree of comfort, at least if you weren’t the one tasked with cleaning my underwear.

But the other key target for the season is winning the league title and right now, we haven’t actually won a league game. I still wake up in the night screaming about that St Johnstone defeat and goalless draws with Dundee and Motherwell haven’t exactly helped repair the damage. We have Ross County at home and the only thing we can do is win. Nothing else will be acceptable.

But we should win. Not only are we Celtic, but we actually have some senior defenders now. Erik Sviatchenko is back in the team, fit, but woefully short on match sharpness. He will line up with Dedryk Boyata and that reassures me. I’m all for blooding the youngsters, but I’d prefer to do it when I’m 14 points clear and can afford a mistake or two as part of the learning process.

That said, I am playing a youngster at the back of the midfield. Kristoffer Ajer was not supposed to feature this season, but with Scott ‘Chopper’ Brown’s three red cards in six games, I need to look at options. If he impresses here, Ajer can have a run in the team. 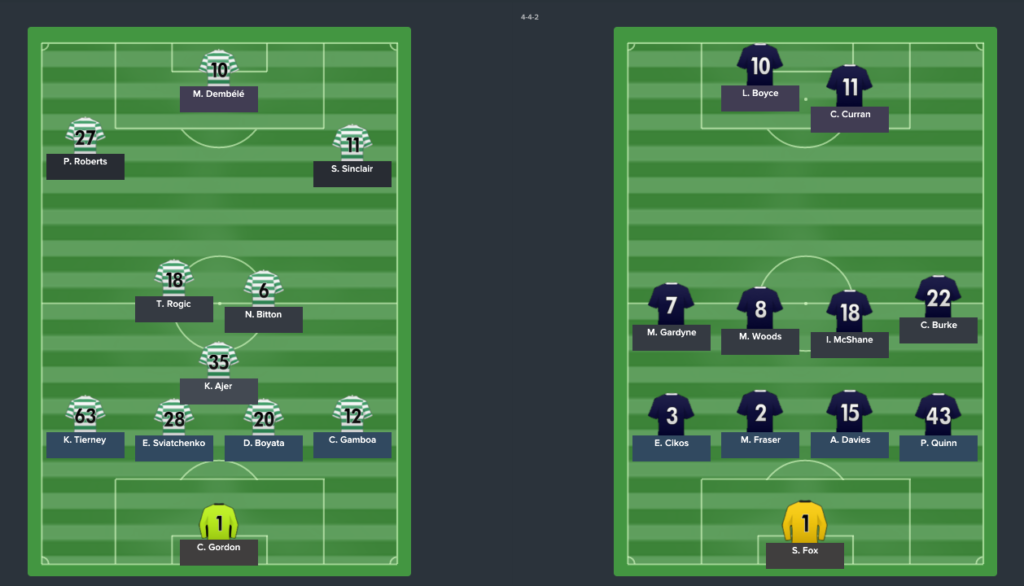 That was…uncomfortable. I have learned a very important lesson about match sharpness and that lesson is: match sharpness is very important. Poor Sviatchenko, carrying my mental stability on his shoulders, dawdled on the ball outside the penalty area, was robbed by Craig Curran and 16 minutes into the game, we were a goal down.

Sweat pouring down my shoulders, I elected to hold steady and allow class to out itself. Class, however, was rather keen to stay in the closet. In the second half, we finally came good. Our relentless crossing brought an own goal equaliser and three minutes later Scott Sinclair put us in the lead with a well struck free kick.

We could have extended our lead, but it was enough that we never looked like losing it. We’re not quite gelling in the league though. This formation isn’t quite working. Moussa Dembele looked isolated, Tom Rogic doesn’t seem to be doing much, we’re not linking it all together. Back to the drawing board. 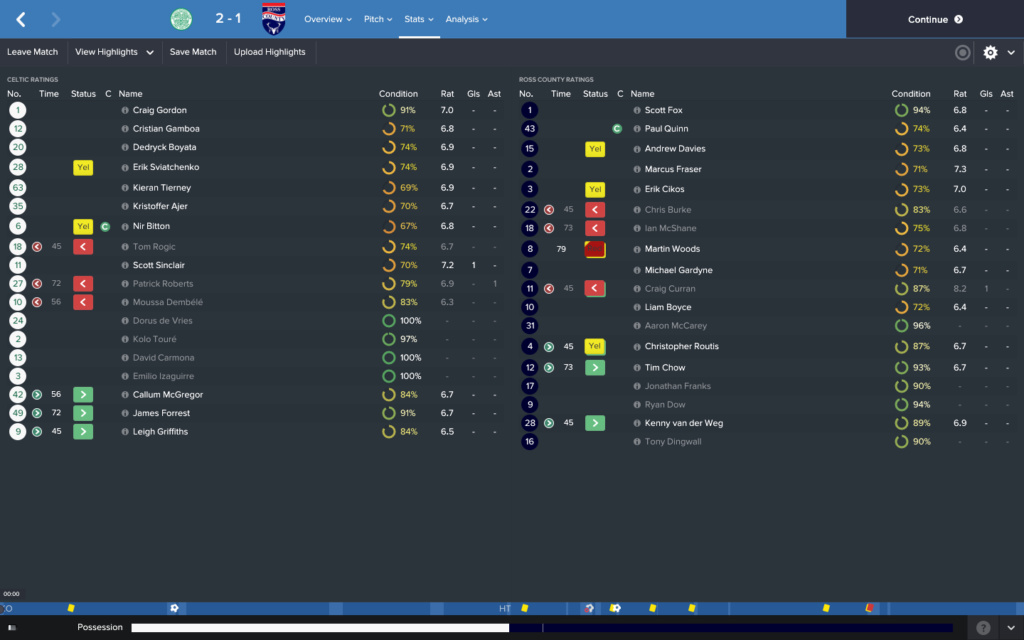 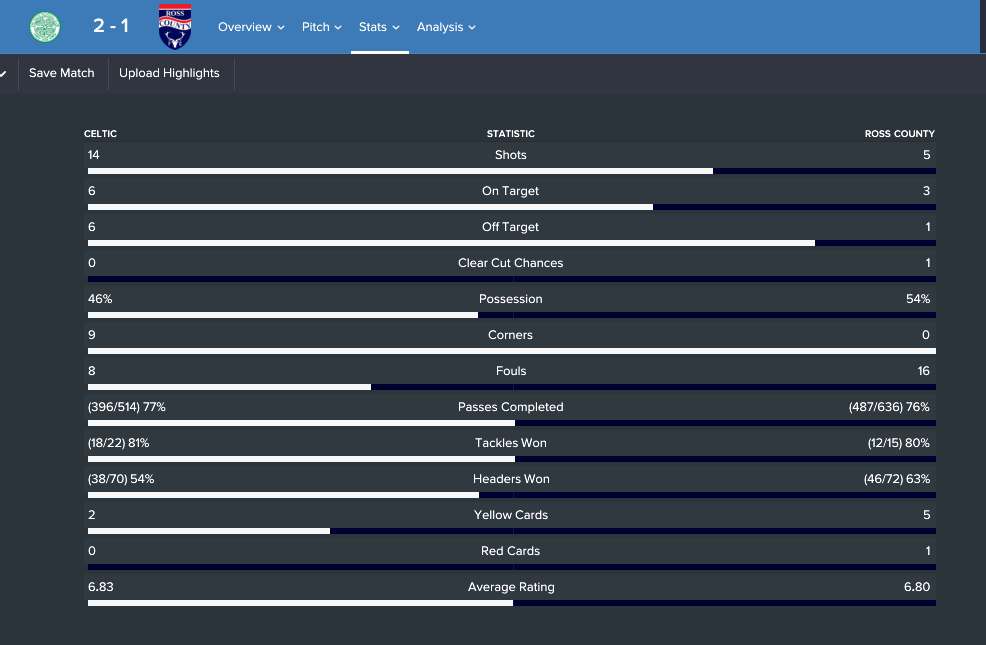 ALEX: After the tension of European football, Iain seems pleased to get back to the less challenging environment of the league. (Yes, I’m hoping he reads this and that my mind games work.) I am, on the other hand, still fretting about a slump in form that even my daring tactical shift hasn’t yet arrested. Next up are Killie away, yet another fixture on the road denying me the comforts of Ibrox.

The formation stays the same. Macheda and Rudden start up front, though I plan to swap their roles after a few minutes to confuse the opposition. Kiernan comes in at the back for Wilson who is injured again, and I move Senderos to the central position because he’s my best aerial defender. Otherwise, the team remains the same.

We will adopt a tighter, slighter more defensive approach because of Kilmarnock’s home advantage. They look to be sitting deep too, with quite a gap between their front three and the rest of the side, which I hope will allow my defenders and midfield to push up slightly and dominate the space. Football is all about space, after all, and part of the thinking behind the new formation is to overload on attack and press higher in defence. 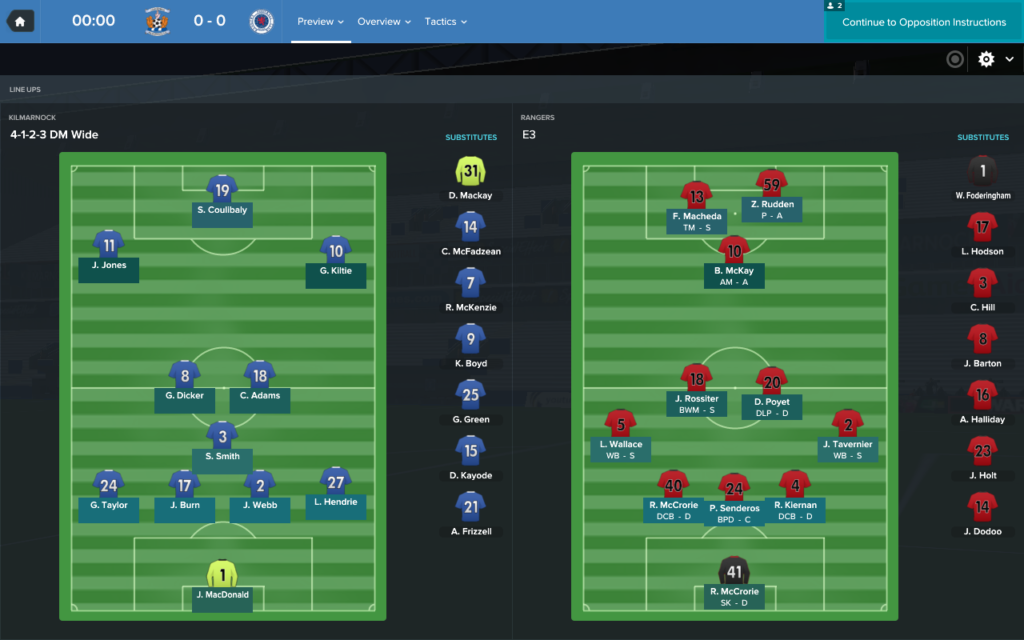 Where’s that bunker, Iain? Give me the keys and a pack of Chesterfields, for I am done. It was an unmitigated disaster. Coulibaly utterly dominated us up front, scoring one and assisting another. Senderos and McCrorie were last seen in the corner of the changing room, gently rocking back and forth in shock.

While Killie’s defence barely gave us a sniff, the killer blow was struck was on 39 minutes when bloody Jordan Rossiter went all Scott Brown and scythed down an opponent to earn a straight red. To be honest, we were 1-0 down and under the cosh already.

The team’s lack of familiarity with the new shape meant that we struggled to adjust as the opposition poured forward. But one whole half with only ten men killed the game, and a 3-0 thumping was no more than we deserved. I shall take some small crumbs of comfort from the fact that we managed six shots on target and massively improved our tackling, up to 92%. Nonetheless, it’s a bit of a dicking. I’m keen to move on. 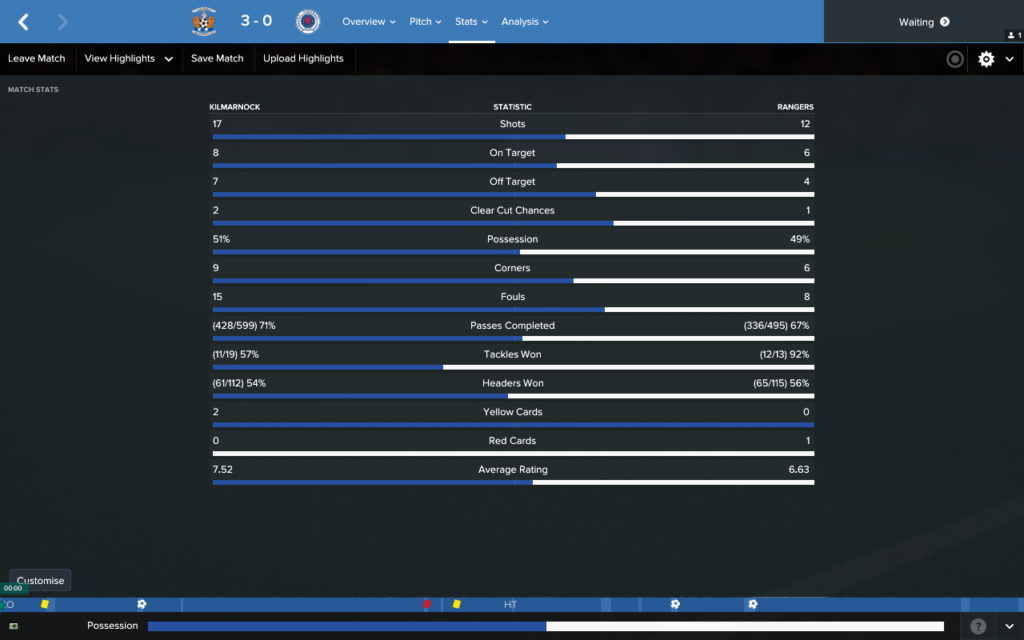 IAIN: Thanks partly to the repeated failings of Alex and I, Inverness Caledonian Thistle are riding high in the league at this very early stage of the season and they must be respected. Still in search of a better way, I opt to match their 4-4-2 with Leigh Griffiths coming in to support Dembele. If we’re not going to be out manned in the middle, I feel I can risk it.

We’ll have the same basic gameplan, the same desire to get those full-backs forward and whip the ball into the box. I just hope we won’t have the same result. Back-to-back wins would be very nice right now, especially with the first Old Firm derby against Alex looming on the horizon. He’s bound to sort his team out sooner or later, despite the disconcertingly dark look he’s had in his eyes since that Kilmarnock result. He tells me that he’s never experienced failure like this on Football Manager before. I laugh. This isn’t failure. By the time he’s finished hanging around with me, he’ll have to redefine his understanding of the word failure. 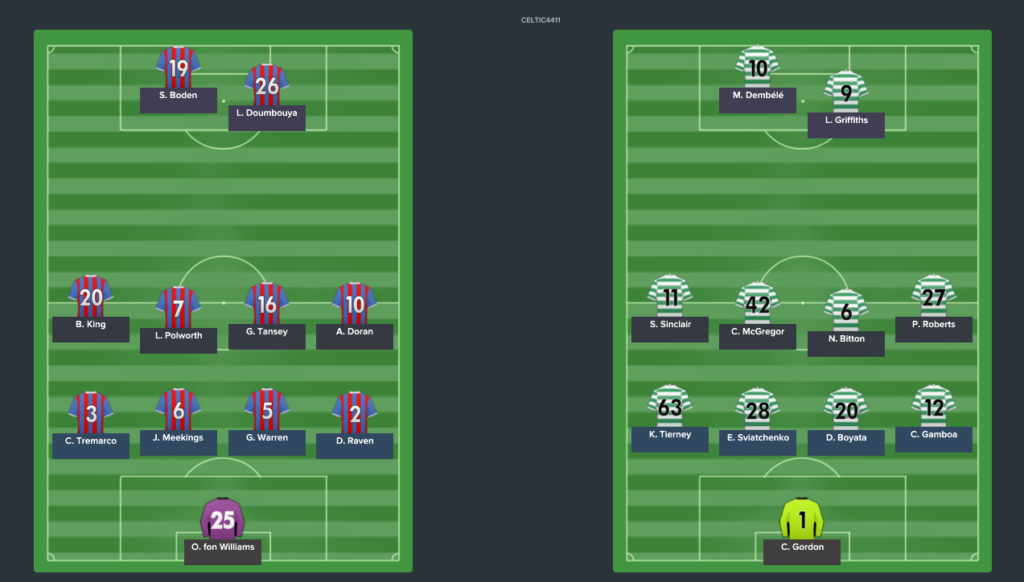 At a time like this, I feel like I should be looking at positives, so here goes: Since the St Johnstone debacle, we’ve conceded one goal in seven games. We are consistently creating 15 or more chances every game. If we had won this match, we would now be second in the table.

But we did not win this match. We scored a perfectly good goal only to have it ruled out for offside. We hit the woodwork. We wasted more good chances. We drew 0-0.

I’m not sure what’s more upsetting. To be beaten out of sight and know that you’re doing it wrong, or to be so close to doing it right, but not being able to make that one tweak that will take you over the edge. I think it’s the latter. It must be because when I typed it out I was almost rage-sick in my own mouth.

I should be heading into the derby match on a wave of optimism, having nailed the Champions League, turned around the league form and inculcated a new, exciting way of playing the game. Instead, we’re a mostly-tepid sort of outfit that can’t yet be trusted not to piss in its own bathwater. I need to find this better way. And swiftly. 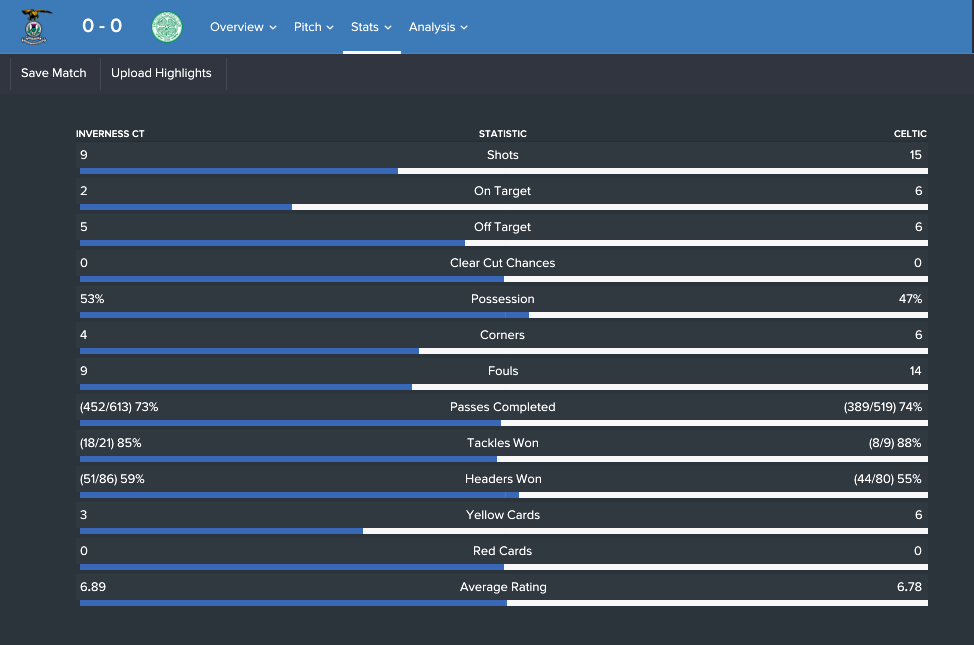 ALEX: And on we move, to a home fixture at long last against Hamilton, the side who scraped a 1-0 win against us in the early round of the Betfred Cup. Before the match, I call the gang together for a team talk. These can be useful, but they’re tricky too: One wrong word can lose the dressing room and as a young, inexperienced manager facing pretty low morale anyway, I choose my approach carefully.

I explain that we haven’t been doing well (fact), but I believe there’s quality enough in the dressing room to turn things around (optimistic speculation). And who should stand up for me, but the Confucius of the Clyde himself, Joey Barton. He assertively states that yes, we are playing badly and we should pull our collective finger out and get on with winning matches. It’s welcome support from an unlikely source, and I feel a deep sense of gratitude towards Barton. It’s quite uncomfortable.

But we are judged on deeds, not words, and having cogitated carefully, I think I have the solution to our issues in a very practical sense too. Poring over the squad’s numbers, I can see that our passing and decision-making is only moderate, but our pace and stamina are pretty good, especially out wide. And so I abandon the patient, possession-based approach for a quicker, more attacking style, clearing to the wings, pushing higher up the pitch with Robby McCrorie as a sweeper keeper, and passing into space.

As Jonathan Wilson would say, we are aiming for verticality. It also mitigates our weakness of getting pushed off the ball by bigger, stronger sides because we aren’t dwelling on it. Instead, the aim is to transition quickly into attack having won the ball, and use our pace and the extra man up front to attack. In terms of personnel, the team stays the same except for the welcome return of Joe Garner, who slots in for Rudden, and Barton, who I recall in a flush of affection and because Rossiter is suspended. 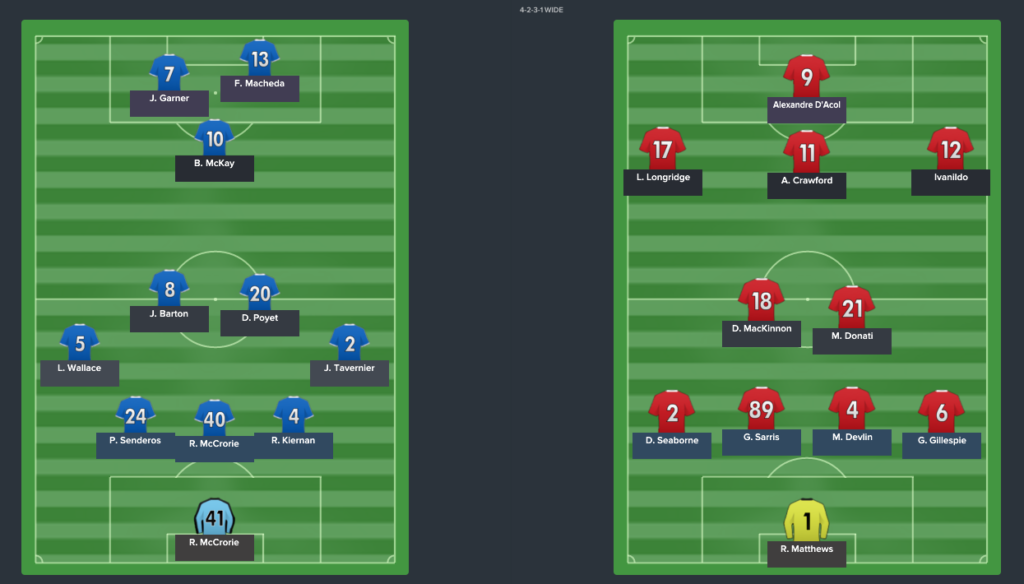 And it works! In fact, it works sublimely well. After 20 minutes we are 2-0 up, Garner and Macheda both netting after assists from Wallace. We are, for once, playing exactly as I have set us up to play, and it’s a gratifying sight. Garner also lays on a goal for McKay and plays superbly, while my wing-backs continue to impress, and the McCrorie brothers score 7.3 and 7.5.

Barton picks up a yellow but that’s the only blot on his otherwise excellent performance. He also provides a bit of leadership in a young side and, while I like Rossiter a lot, Barton has given me a welcome dilemma when the younger man returns.

We manage nine shots on target and one clear cut chance, restricting them to three shots on target despite ceding 56% of the possession. We are brisk, efficient, and very, very vertical. Yes, our tackling goes to pot again and yes, we still are not very good in the air, but a resounding, confidence boosting win moves us up to 8th spot, one above Celtic on goal difference alone. All those anti-football draws are counting against Iain now. 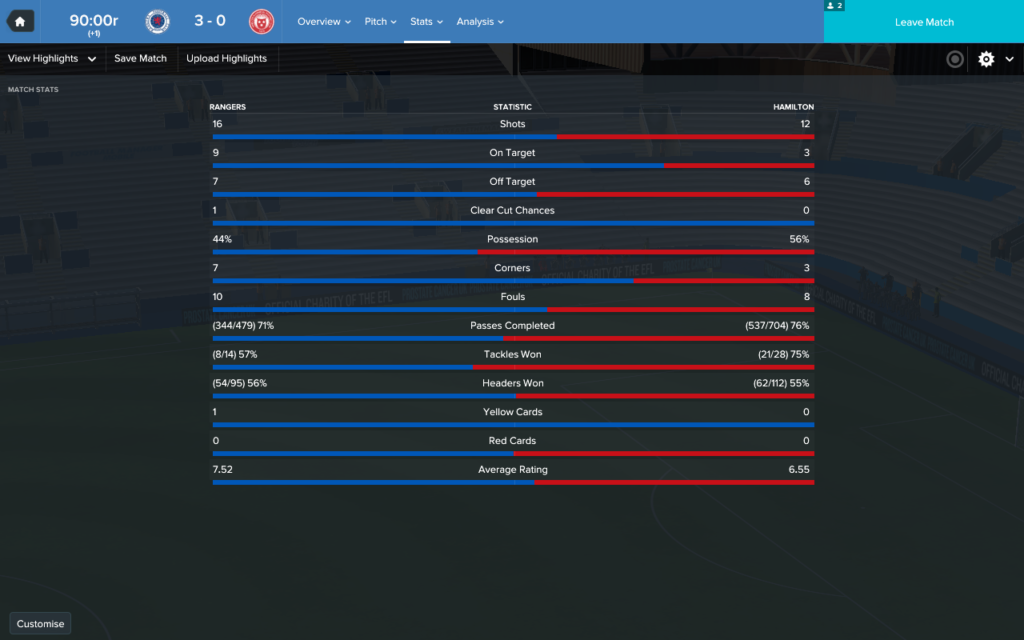 And so the stage is set for the Old Firm derby. The anticipation is quite something, especially when you factor in that more than 4,000 people watched a dour 1-0 win for Celtic in the away leg against Rosenborg. I’ve never played in front of a crowd before, but I think my cool head and the fact that my team seem to have found their feet with the new approach gives me the edge. There’s an awful lot riding on it, after all. 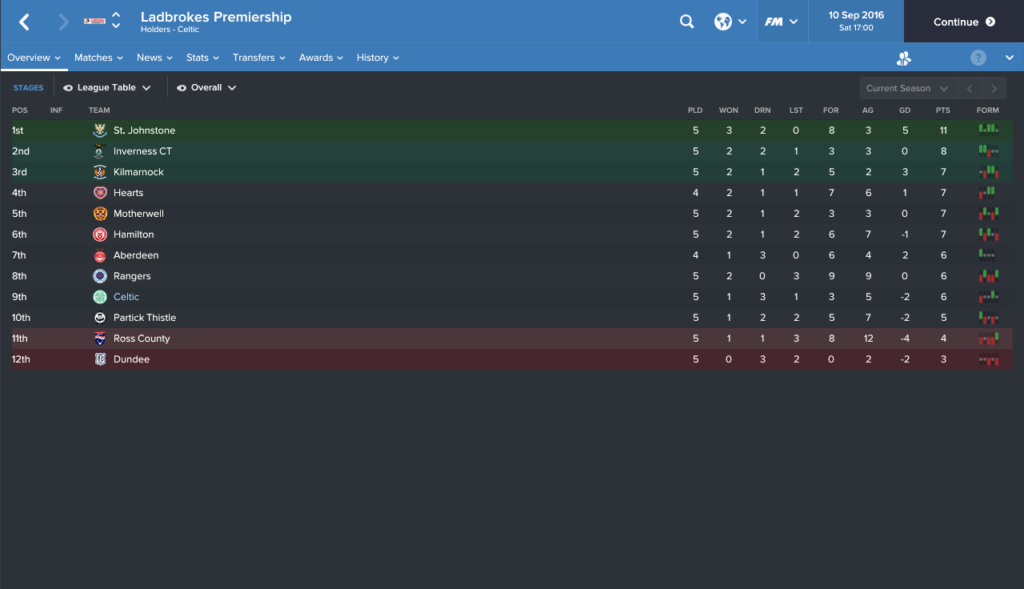